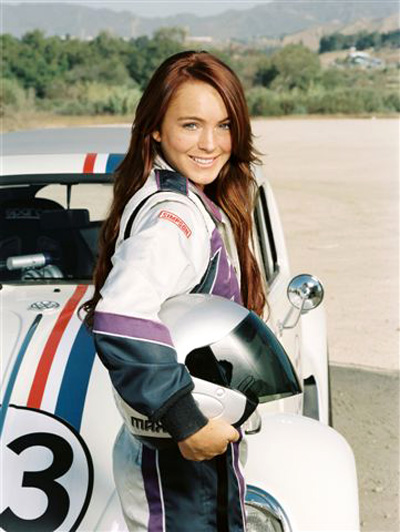 It could be just fine, you know. Or, possibly, it could be the world's first scheduled train wreck.

We're pretty happy that Lindsay Lohan seems to have her stuff together these days. Still, we're not exactly sure what Formula 1 racing had in mind when they picked La Lohan--party girl extraordinaire in the past--to headline a string of concerts kicking off Singapore's F1 Grand Prix weekend.

Let's repeat this for the right-lane-brained fans here at CelebsAndCars: F1 has hired LINDSAY LOHAN to host concerts in a country that BANS CHEWING GUM. With apologies to Garrett Morris, how loud do we have to say it?

The fond at the bottom of this saucier of anticipation: Lohan's replacing Pussy Cat Doll Nicole Scherzinger, who backed out of the appearances a few weeks ago. Possibly, LiLo didn't realize Singapore was not some cool sushi place in Studio City, instead of a tiny dictatorship 8000 miles from home. Or maybe she's totally contrite about her past and has no problem being Pussy Cat substitute while she recovers some of her starsheen.

Also fun for car fans: Lindsay went on the record with the AP about how she's a Formula One fan, and the fact that she likes fast cars (which we knew). "I studied NASCAR for almost a year for Herbie," she said, recalling her last on-screen triumph in Herbie: Fully Loaded. New parlor game: write down all the questions this begs about F1-NASCAR comparisons, the last car VW put on the pole at Darlington, and, um, how you spend a whole year studying NASCAR.

Unless they are shut down by Singaporean police for the kind of stuff Elvis did 50 years ago, the concerts will feature the likes of No Doubt, Simple Minds and ZZ Top--all of which were probably formed before 23-year-old Lindsay was conceived by Match.com-worst-case-scenario Dina and Michael Lohan.