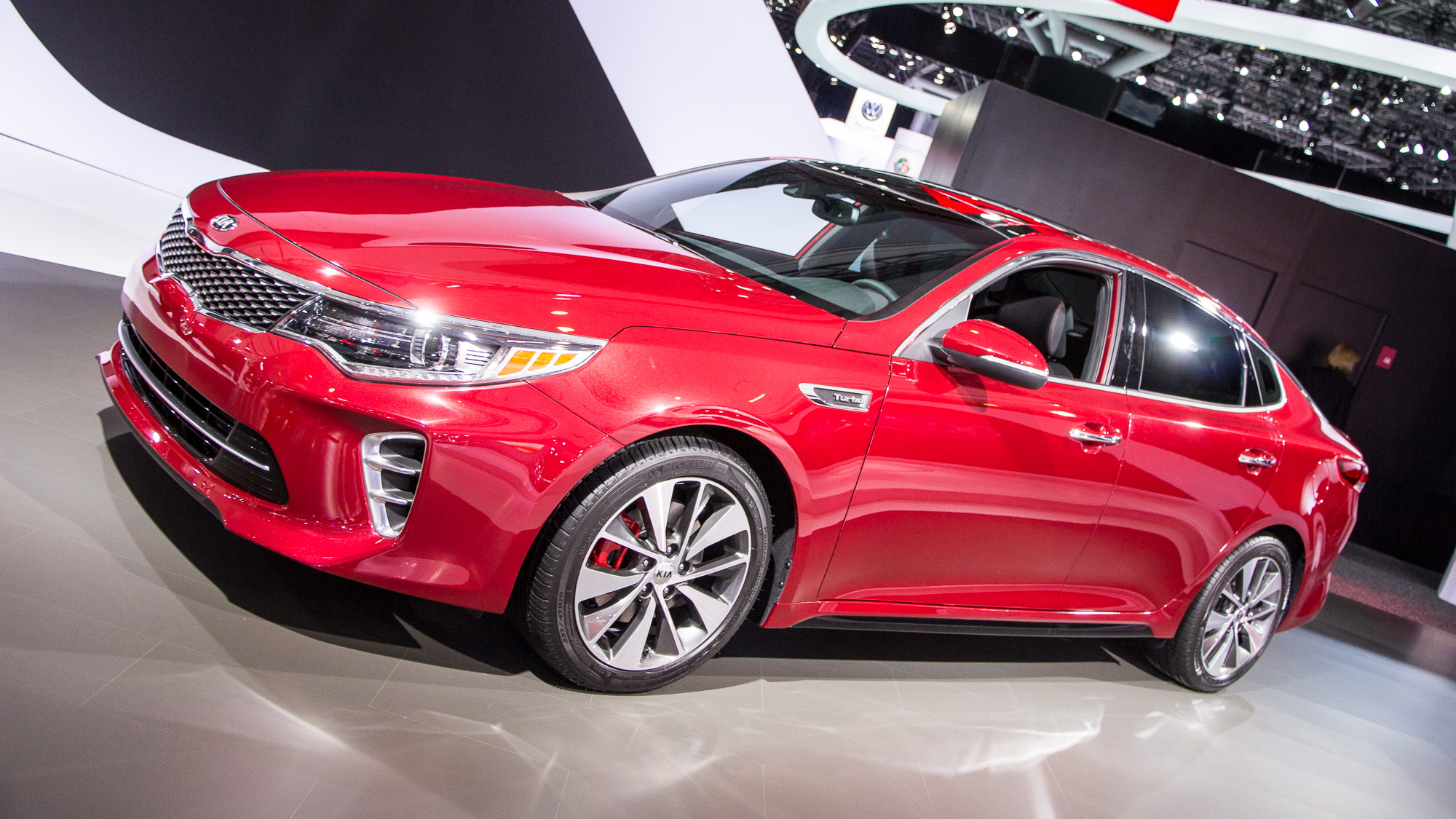 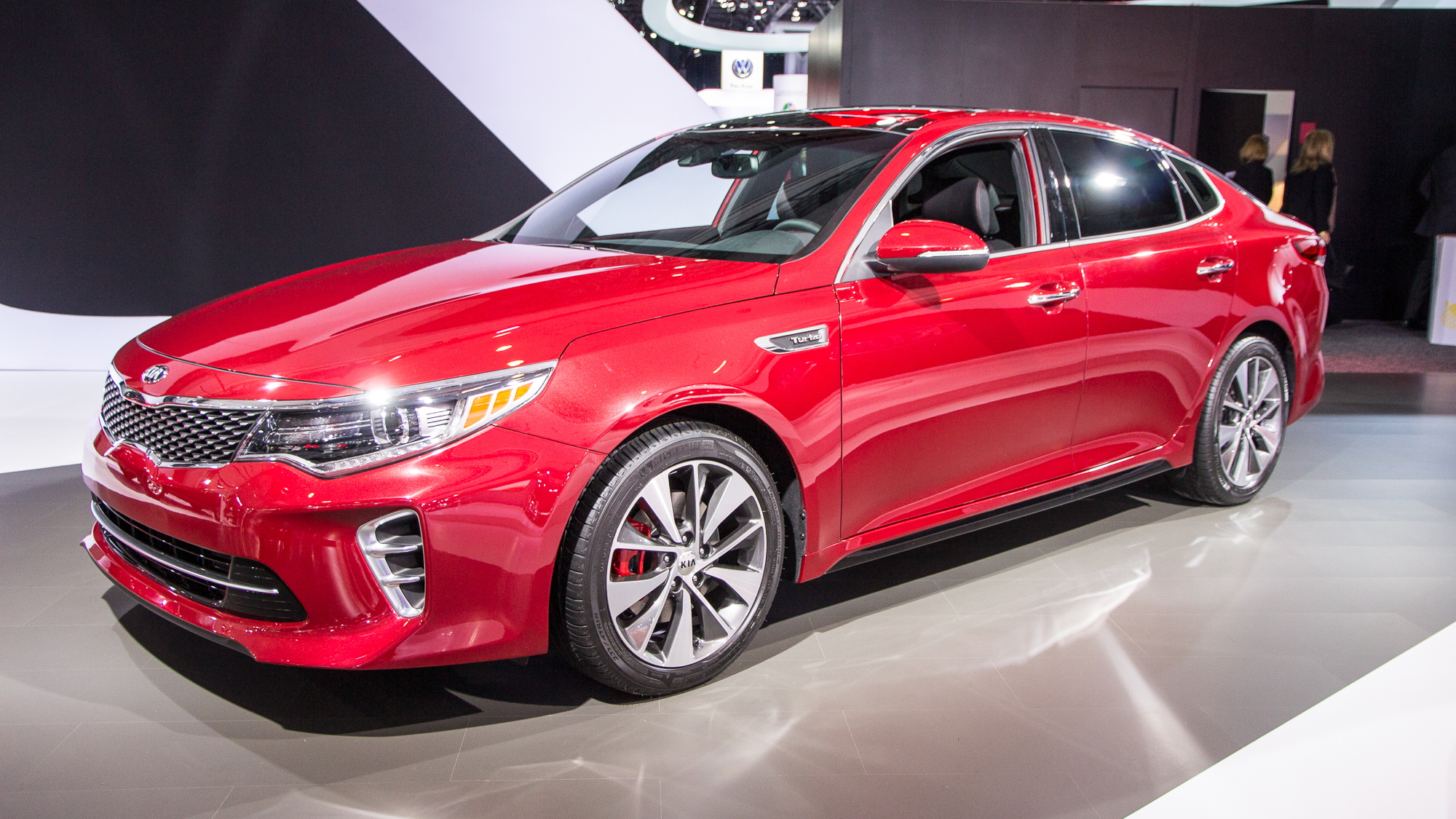 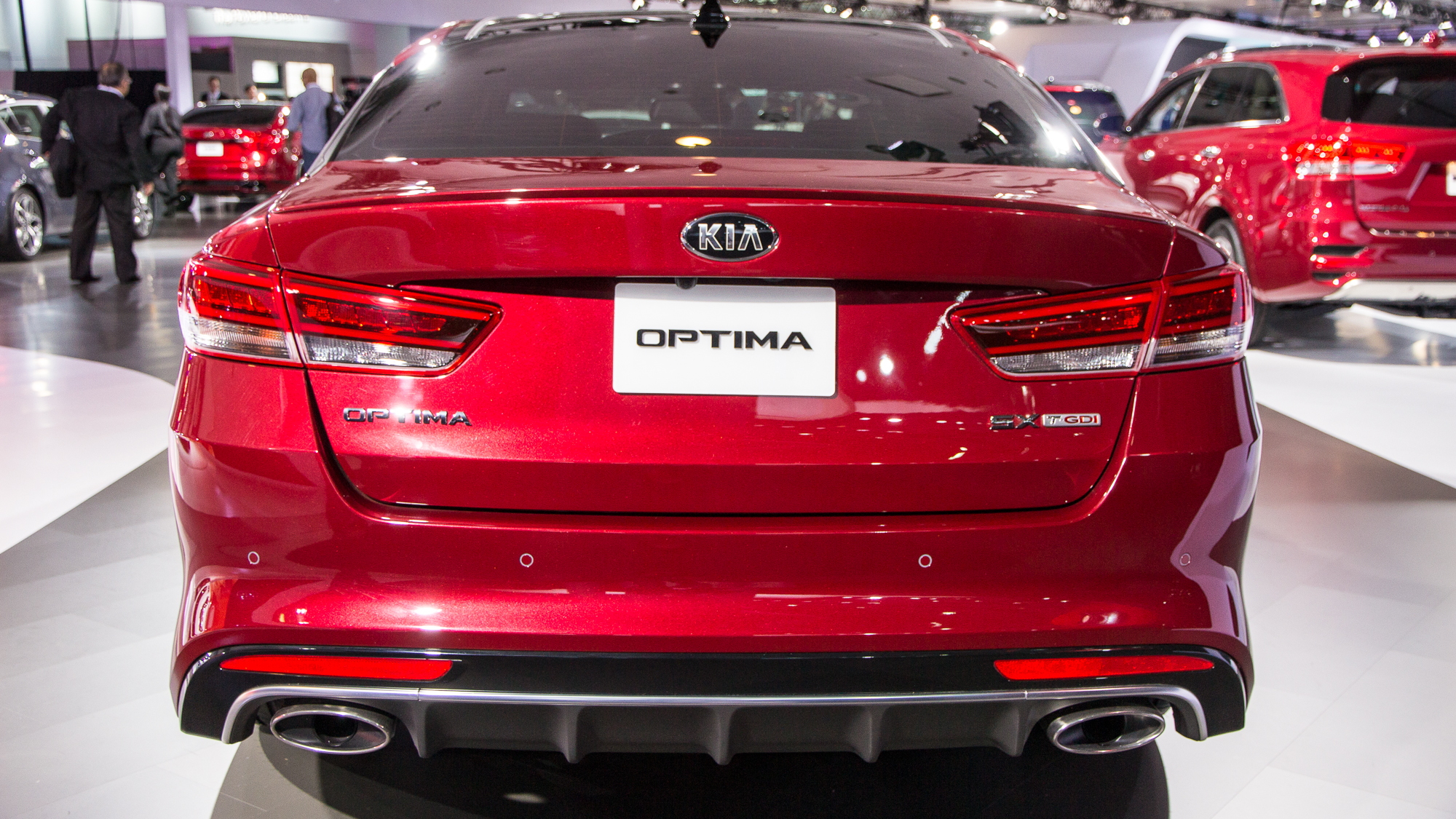 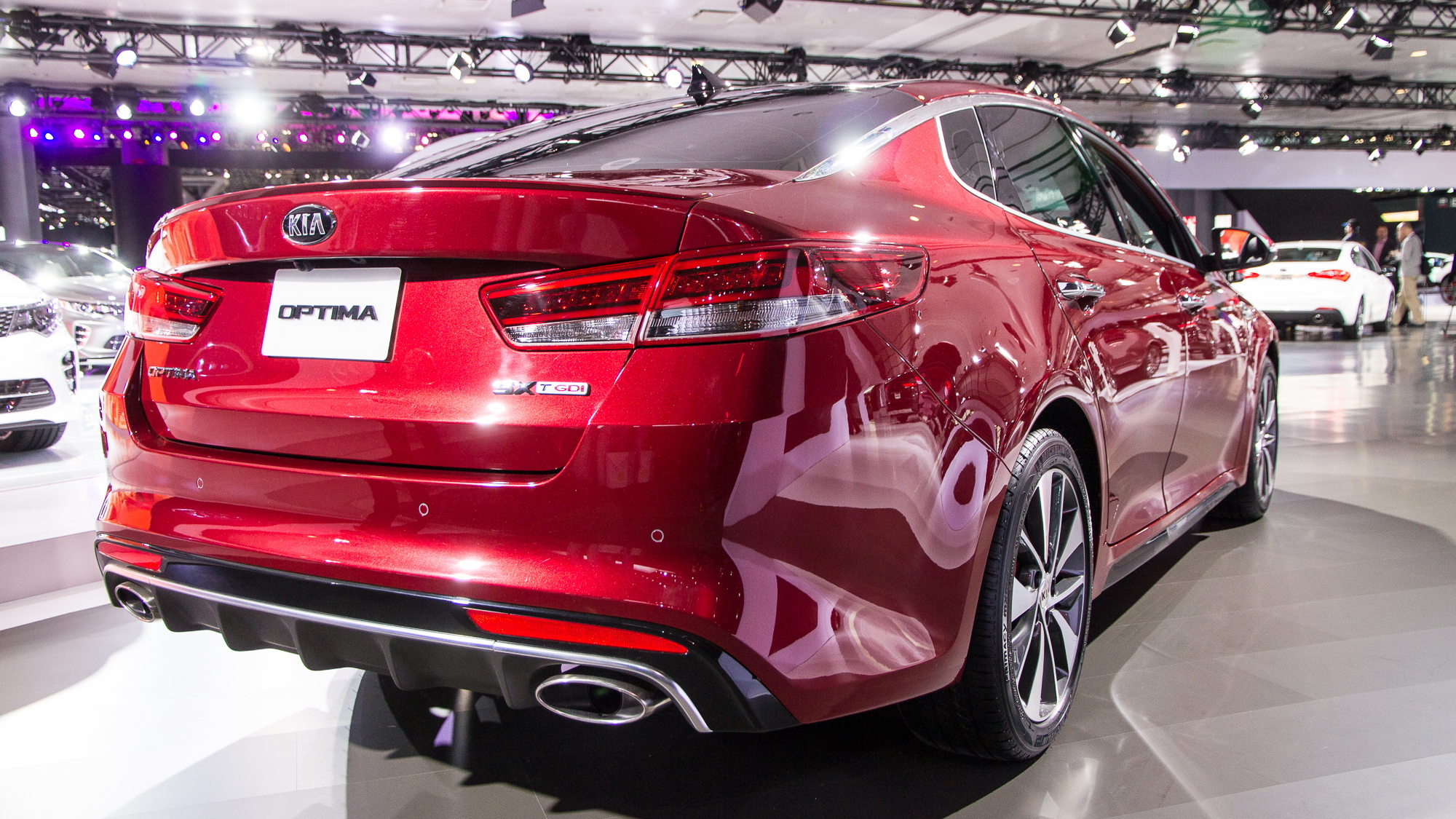 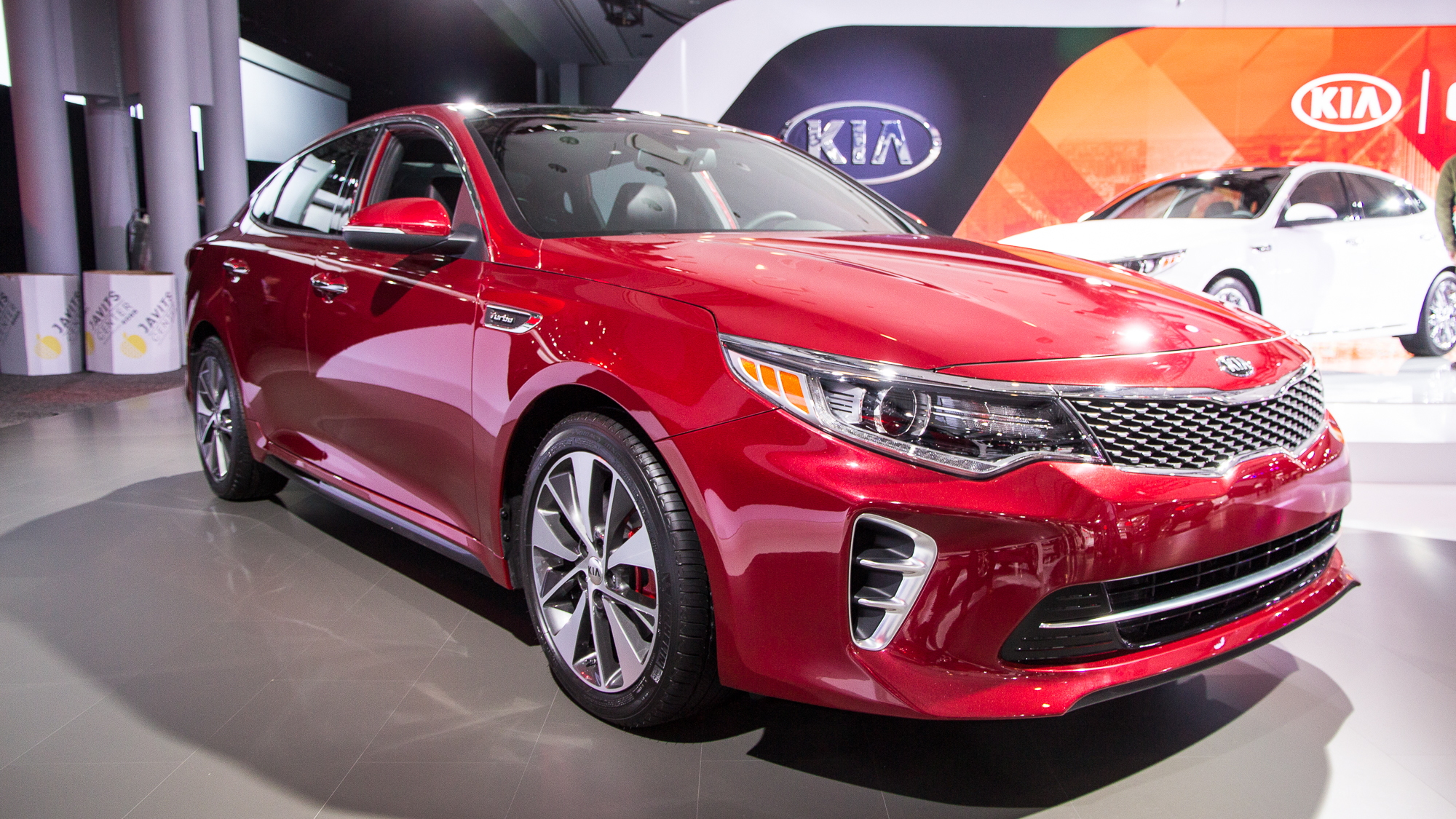 Kia’s all-new 2016 Optima sedan has made its debut at the 2015 New York Auto Show. It was at the New York event back in 2010 that Kia first broke off the shackles of lame, design by committee styling when it unveiled its striking, third-generation Optima. The vehicle quickly became the brand’s bestseller here, a title it’s held for the past three years, and now, five years later, Kia is launching a successor model.

The latest design isn’t quite the revolution Kia’s design team made with the previous model, and we have to admit feeling a little letdown after seeing the recent Sportspace concept, which was a preview of the new Optima, but it’s still a definite improvement, especially the profile. Responsible for the look was Kia design chief Peter Schreyer.

Underpinning the car is a chassis that’s longer, wider and stiffer than on the previous model, resulting in improved ride and handling as well as more cabin space. The stiffer structure, brought about by the increased use of high-strength steel, adhesives and hot-stamped components, also improves crash protection while simultaneously being the foundation for a quieter ride.

Additional innovations were implemented to reduce NVH, lighten the vehicle and enhance aerodynamics. One of the most impressive—for the segment—is a panoramic sunroof support structure made with carbon fiber-reinforced plastic, which helps reduce weight and lower the vehicle’s center of gravity. Furthermore, new suspension geometry, a new steering setup (available) and many other small but important changes result in improved steering response, high-speed stability and handling.

At launch, the 2016 Optima will be available with three four-cylinder engine choices and five trim levels: LX, LX Turbo, EX, SX Turbo, SXL. The three engine choices include a new turbocharged 1.6-liter mill as well as the previous model’s turbocharged 2.0-liter and naturally-aspirated 2.4-liter units. The 1.6-liter mill is also paired with a new seven-speed dual-clutch transmission, while the older units stick with six-speed autos.

Peak output for the 1.6-liter mill is an estimated 178 horsepower and 195 pound-feet of torque. The 2.4-liter should be good for 185 hp and 178 lb-ft, while the 2.0-liter should rate in at 247 hp and 260 lb-ft. Those outputs are lower than what the 2.0- and 2.4-liter engines produce in the previous Optima, with Kia explaining that for the 2016 model the engines were retuned for fuel economy and better drivability (maximum torque is now available at lower revs). Hybrid and even plug-in hybrid versions of the Optima are expected at a later date.

Drawing inspiration from Kia’s more upmarket sedan, the interior of the 2016 Optima utilizes more soft-touch materials throughout the passenger compartment, as well as real stitching and metal accents. The driver-oriented cabin has been simplified with a cleaner, more unified design than the previous generation, with a stronger horizontal plane and a wider center console that help create a greater sense of space.

In the tech department, Kia's UVO system is standard and comes with four new eServices: Geo-fencing, Speed Alert, Curfew Alert and Driving Score. Also available are Android Auto and Apple CarPlay, which allow drivers to access a suite of core functions from their smartphones via the car’s 8.0-inch touchscreen. Electronic driving aids include a rearview camera with an available 360-degree monitor. Also available: Advanced Smart Cruise Control, Blind Spot Detection, Rear Cross Traffic Alert, and Autonomous Emergency Braking that can bring the vehicle to a complete stop if it detects an imminent collision.

Production of the 2016 Kia Optima for the U.S. market will continue at Kia’s plant in West Point, Georgia. Pricing will be announced closer to the vehicle’s launch later this year. For an in-depth look at the car, check out the preview at our sister site The Car Connection. And for more from the New York Auto Show, head to our dedicated hub.