Most of us mere mortals will never get the chance to feel the acceleration of a Formula One car or experience the thrill of hitting a chicane at more than 200km/h. Some things were never meant to be, but companies like Australia’s Hyper Stimulator offer some solace with its lifelike simulators that puts you in the driver’s seat of a virtual race car. What better place and time to gauge the realism of the simulators than at Melbourne’s Luna Park during F1 week. MotorAuthority was there to watch BMW test driver Sebastien Vettel duke it out against several pro-gamers using Image Space’s rFactor racing simulation. The ultra-realistic simulator software comes with support for complex aerodynamics, lifelike graphics and multiplayer modes, and you can download a demo direct from the rFactor website. A similar set-up, complete with the racing chassis, would cost less than ten grand. 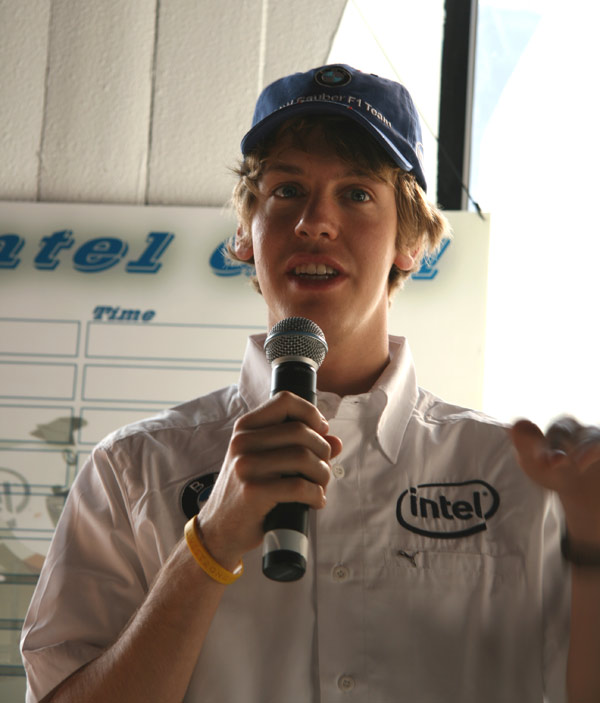 BMW-Sauber with help from Intel and its latest vPro technology and Core 2 Duo processors has built 30 of these simulators to train up and coming drivers as well as allowing them to hone their skills around international circuits before even setting foot outside its testing centre. Intel had four of the Hyper Stimulator capsules in Melbourne hooked up to 30in Dell LCD screens positioned just centimetres in front of the driver. For added realism, the chassis comes with a fully adjustable, leather-lined, F1-style steering wheel with paddle shifters and real programmable buttons. There’s even a five point racing harness and rear spoiler to make it look and feel more like a race car.

This was Vettel’s first time around Melbourne’s Albert Park circuit in virtual mode, and the 19-year old managed to score some brilliant times. Used to playing racing games on his notebook or desktop PC against other drivers including BMW’s own Robert Kubica, Vettel showed us why he’s been referred to as the next Schumacher. When the two play against each other on their notebooks, it’s neck and neck all the way with track times swapping between 1min 28secs and 1min 24secs. Now, thanks to Intel and its support of the rFactor simulation and BMW Sauber F1 Team, fans of F1 can get even closer to the sport and the team using the same software.

After Vettel ended his demonstration, we took our own turn at the simulator in the hope of beating him and securing that all-important F1 contract. Sadly, our initial attempt ended with a crash on the first corner. The rFactor program is easily one of the most life-like racing simulators on the market today, right down to the fact that simply giving it too much throttle will send you into a spin. The Hyper Stimulator chassis added to the realism, its racing bucket seat and F1-style steering wheel made us feel like we were seated in a genuine race car. After a few laps, you’d swear that you could give Alonso a run for his money.

BMW's young test driver was born in Heppenheim, Germany, and gained a love of motorsport during his days in karting before moving to Formula BMW in 2003. This is where he showed real potential, taking top honors in his debut and dominating the event in the following year with 18 out of 20 wins. In 2005 he moved into the European F3 before joining BMW Sauber as its official test driver. On his days off, Vettel likes to listen to MP3s or get around in his BMW 325i coupe at his current home in Switzerland. 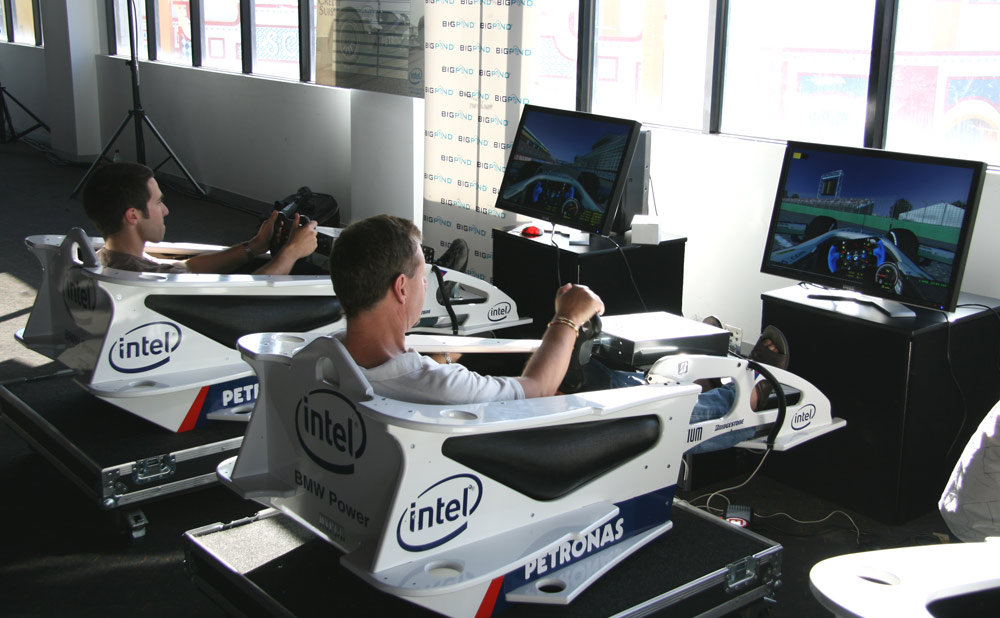 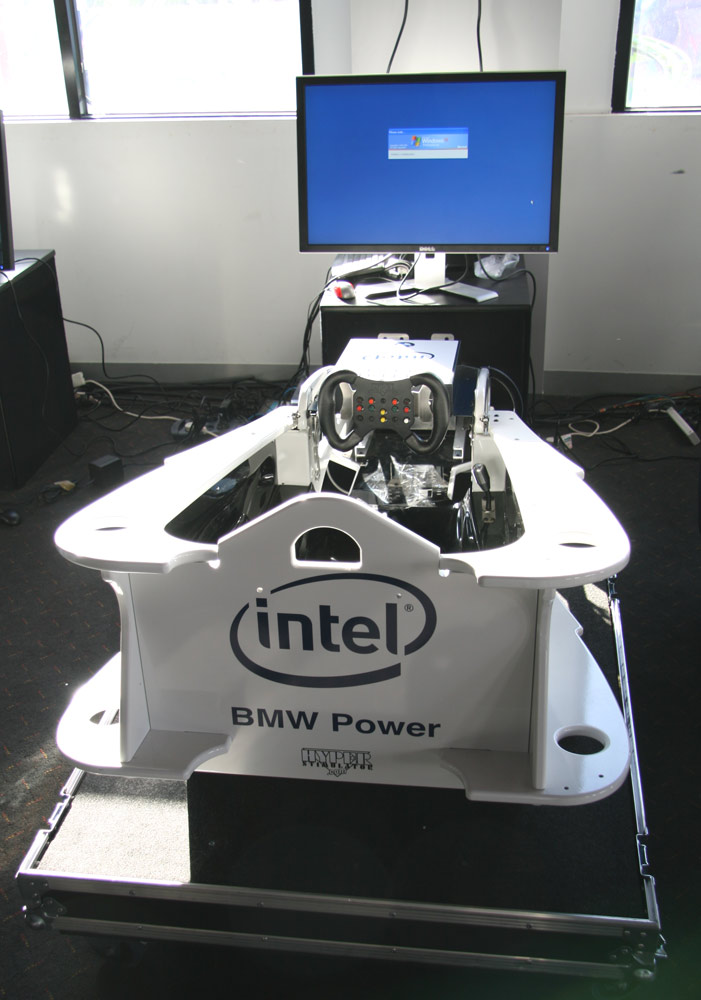 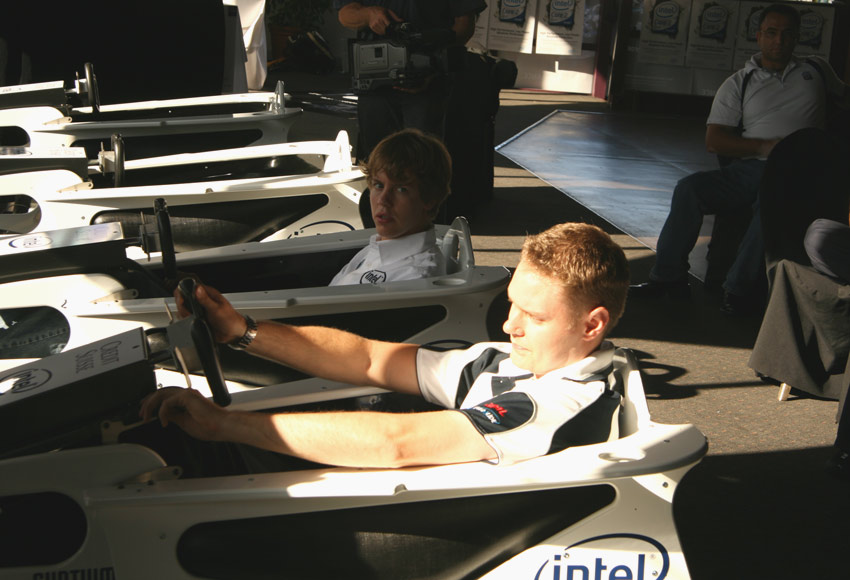 Here's a transcript from the interview with Vettel:

Where do you call home now?

I live in Switzerland now. Originally I come from Germany, close to Frankfurt, close to Heppenheim. I just moved to Switzerland last year as the team is based there, Switzerland and Munich. That gives me the chance to come by the factory every time I want.

Do you play any car games in your bedroom or on your computer at home?

Yeah, I've got these Formula One games and I play a lot. If I'm not in the car, then sometimes I have some time to play.

What car do you drive when you're at home?

How many hours have you spent in an F1 car?

How often do you train on these simulators?

We travel a lot, so in the plane you have to do something, and then we try to play a bit on the computer. It's a good thing because, obviously, it's not as realistic as in the car but it's very close. It helps you a lot to get to know the circuit. At least then you know when there is a right corner or a left corner. You know where you go. And it's getting better and better. A couple of years ago it was very, very bad. Nowadays we have the hills and little kinks, bottoming and everything, the bumps on the circuit. People really focus on building these computer games as realistic as they can and it's getting much better. It got better in the last year, and I think it will get even better.

How competitive are you with the other team drivers at BMW? Do you guys all compete on these things and try to beat each other?

Yes, sometimes, if we have the time. We've all got our notebooks with us and in the evenings, when we have a bit of time and we are not in the most interesting place to be, then we have the chance to play a bit. You cannot say every day, but sometimes we have the chance. I had a fight with Robert Kubica when we were in Bahrain, and we played like mad and practiced on Albert Park just to get the feeling for the circuit again and it was crazy. We started at 1:28 and then we finished at 1:24. When we started it, we were already "okay, this was a really perfect lap", and then every time, he was quicker and then I was quicker, him, me, so it was really interesting.

Is there any technical data that you can take from these things and apply to real cars?

Not with this type of gaming, but some teams have their own simulator that are different. If we test some parts of the car, we can make all the calculations before we actually develop the parts, build the parts, produce the parts, and then actually put it on the car. So the idea of the simulator is to try different things on the setup and try to see how they feel. But you can’t compare it one to one with a racing car because it's still a bit different.

What about the tyres on the simulator? Can you change them?

Yeah you can. It works. Also, the wear of the tyres, if you have new or old tyres, it makes a big difference in lap time. It's pretty good, it works pretty well.

What was the most challenging part of the track for you?

Here in Albert Park? I think the two fast corners are quite interesting. Personally, I prefer fast corners as it’s more demanding. I mean slow speed corners, you really have to focus to be at the latest point on braking possible then turn around the car and accelerate as quick as you can again. But on fast corners, you always get this special feeling. It's coming up, and if maybe you don't have the chance or the opportunity but if you are flying through a corner with 250km, 270, it doesn't matter, everything above 200 just feels amazing.