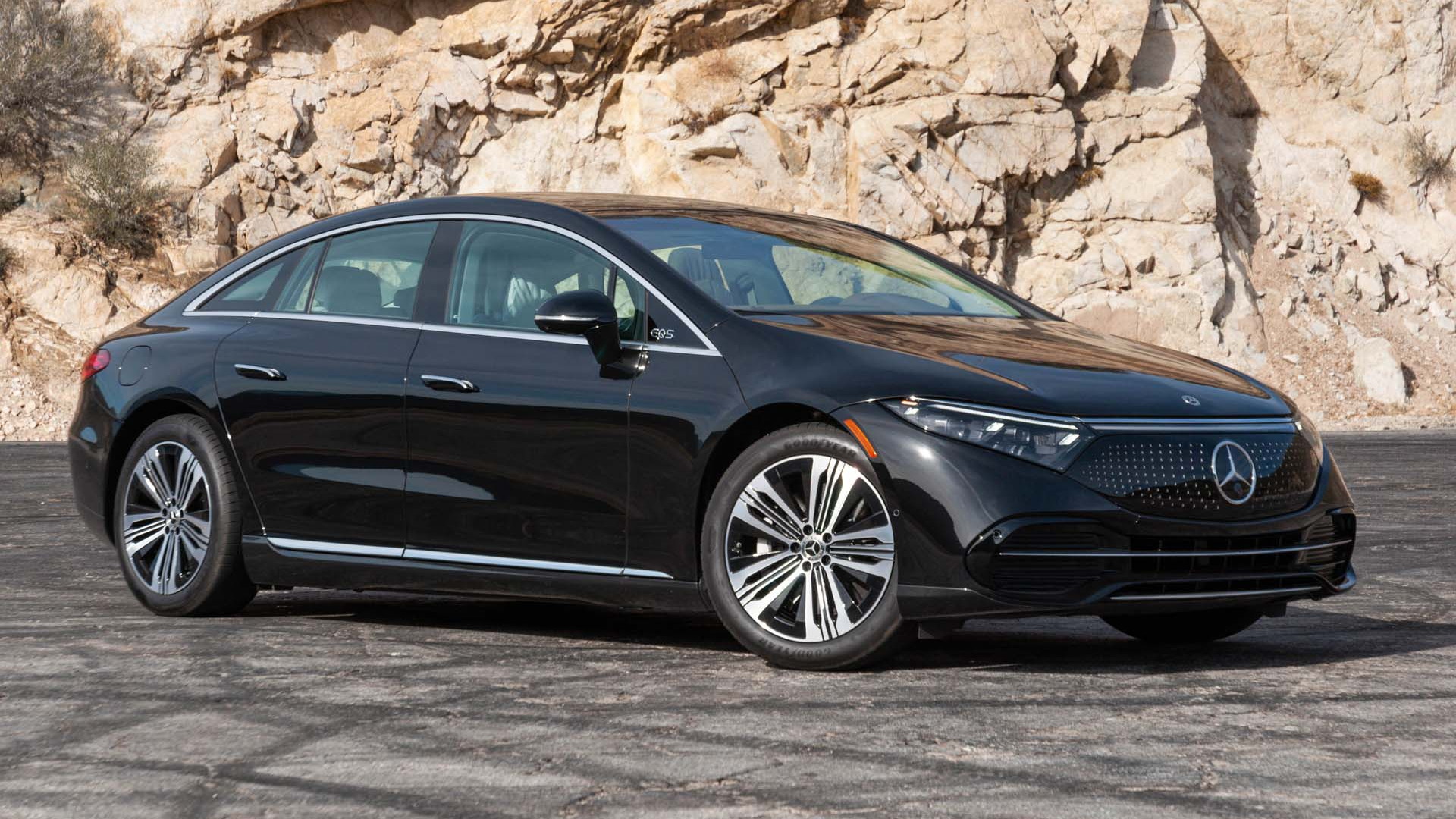 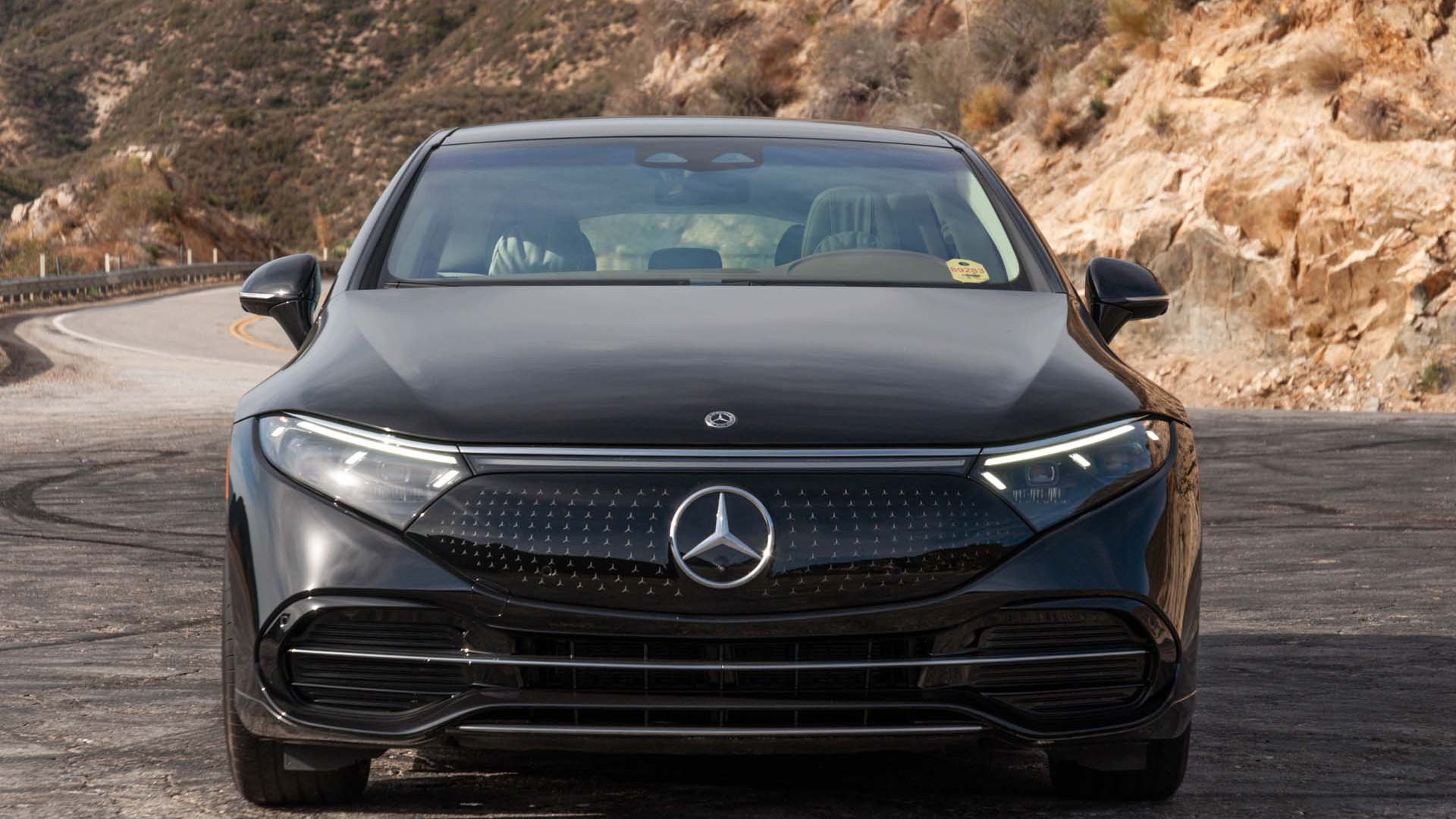 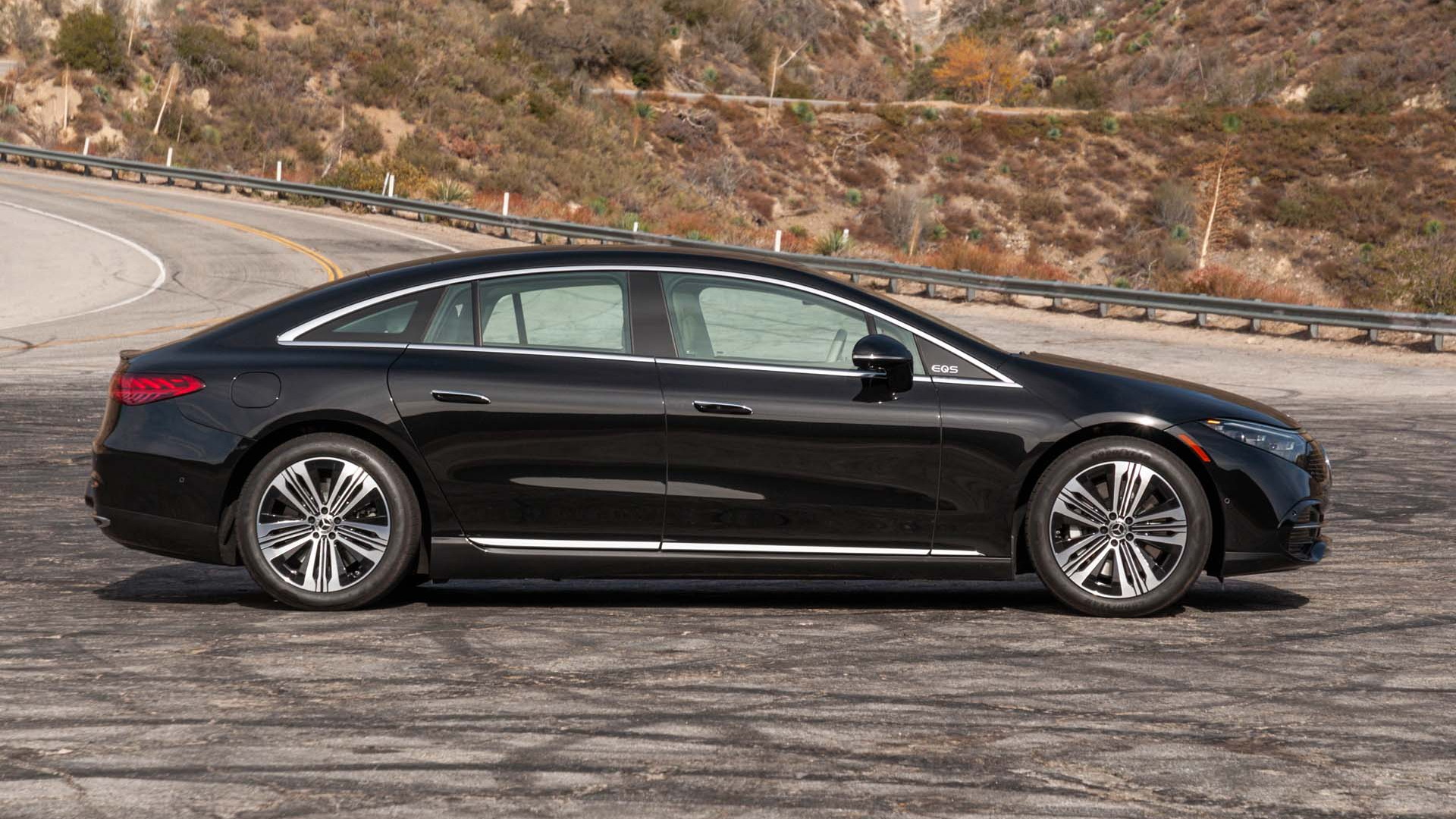 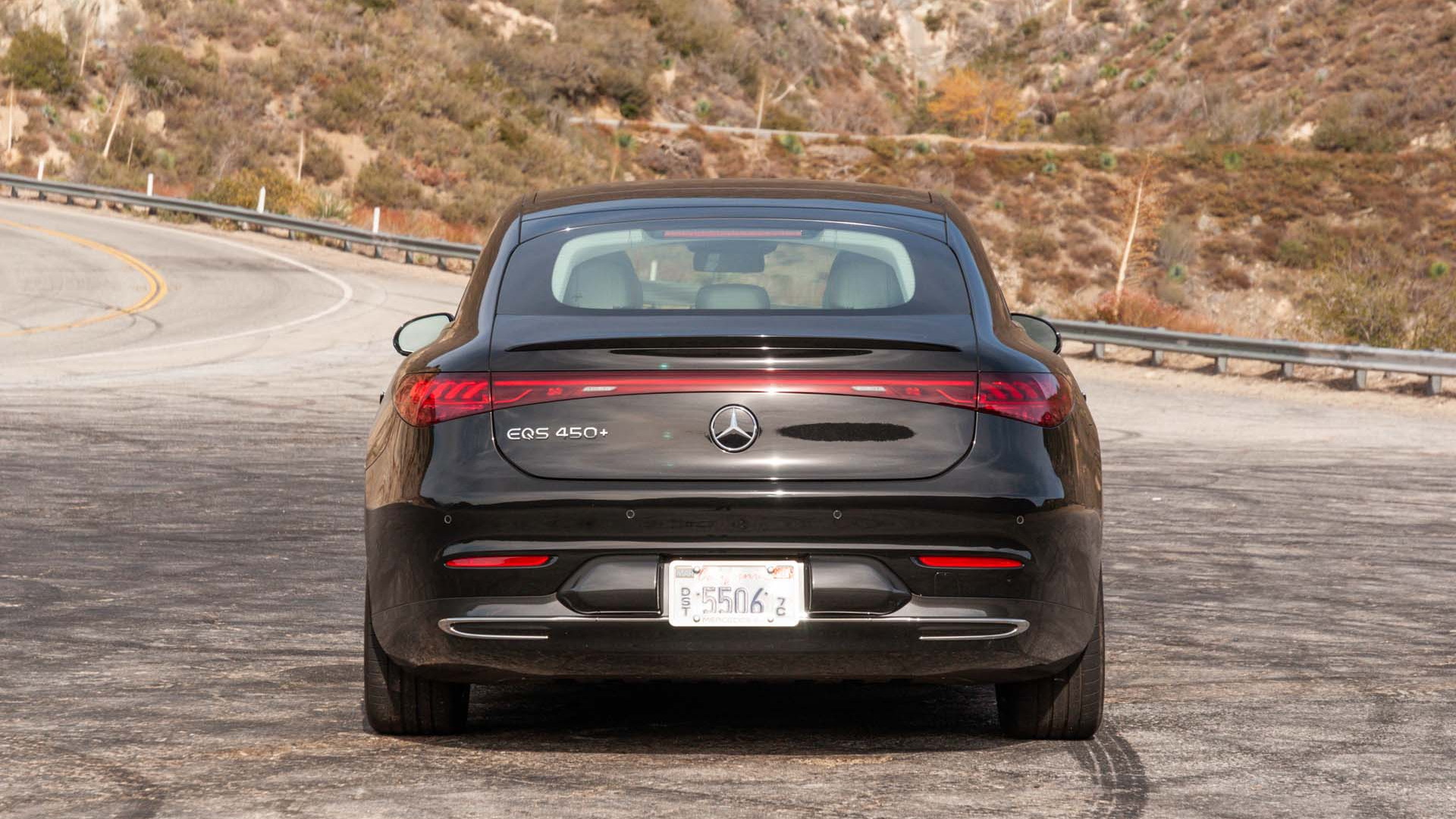 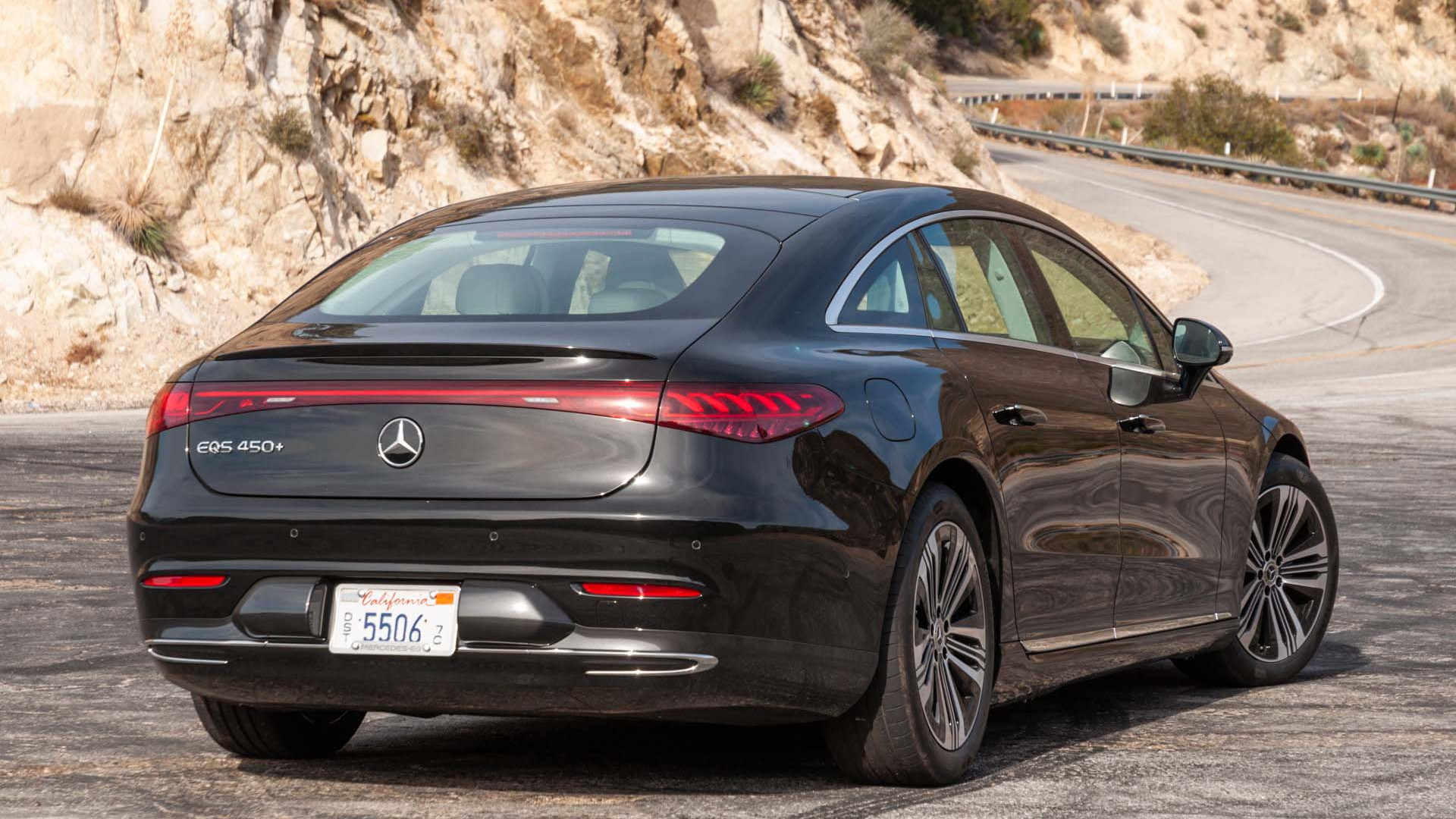 There hasn’t been a true luxury car option in the EV segment until now.

No. Despite its six-figure price tag, the Tesla Model S isn’t a luxury car. The Mercedes-Benz EQS is, and it sets the bar for an old-world segment.

It takes a lot to upstage the S-Class, as it’s the flagship, or at least it was. The 2022 Mercedes-Benz EQS now fights for that exclusive spot in the luxury brand’s lineup and shows the path forward.

After spending a week with the 2022 Mercedes-Benz EQS 450+ here’s what I learned and you need to know. 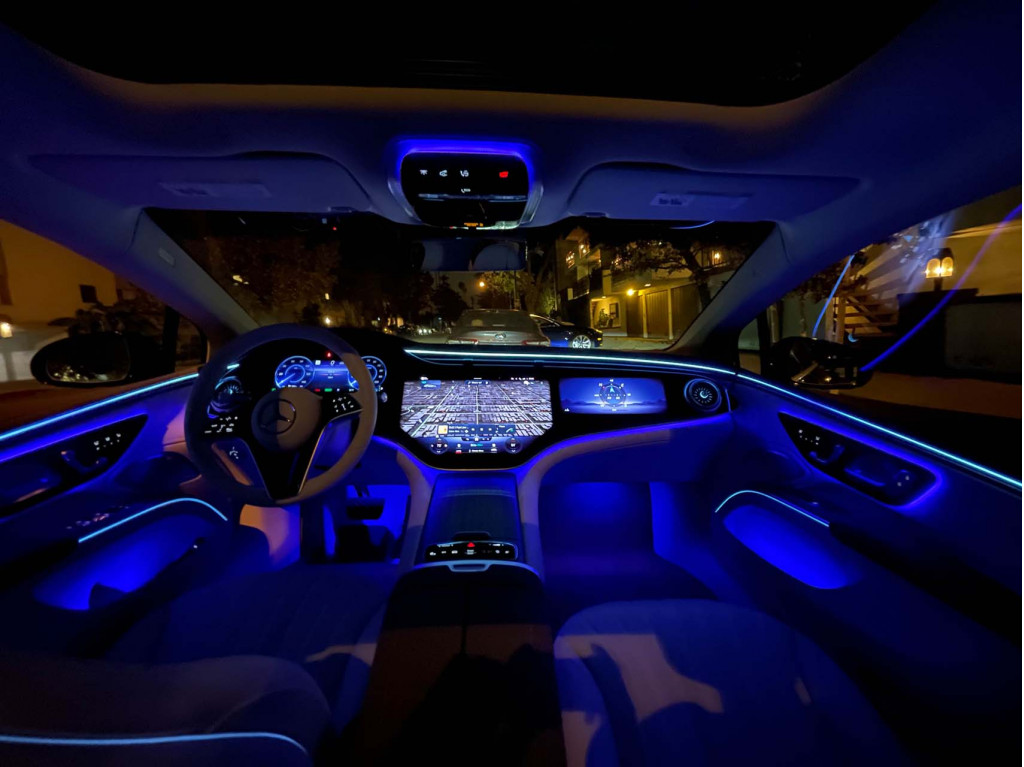 Hit: This is luxury

Back off, Tesla fan club. The Model S is a $45,000 interior (at best) with an expensive battery pack and some powerful electric motors. The EQS features a flagship-level luxury interior. Everything is covered in leather, soft-touch material, glass, metal, and can be heated, cooled, or adjusted to your liking. Yes, the Virgin airline-like LED lighting can be a bit distracting, but it can be turned off (unless you’re into that kind of thing). The available Hyperscreen dashboard with a 56-inch pane of glass covering three screens makes everything else on the market look like it’s from the past while this is from the future. But above all else, the interior’s a place one wants to spend their time, coddled by its pillowy soft materials. 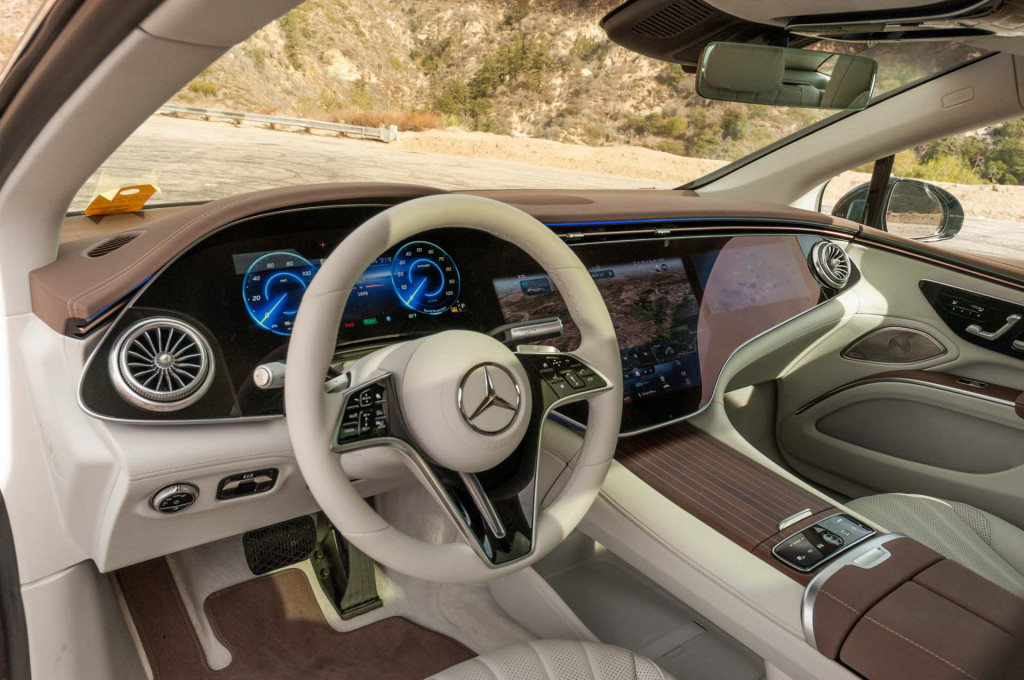 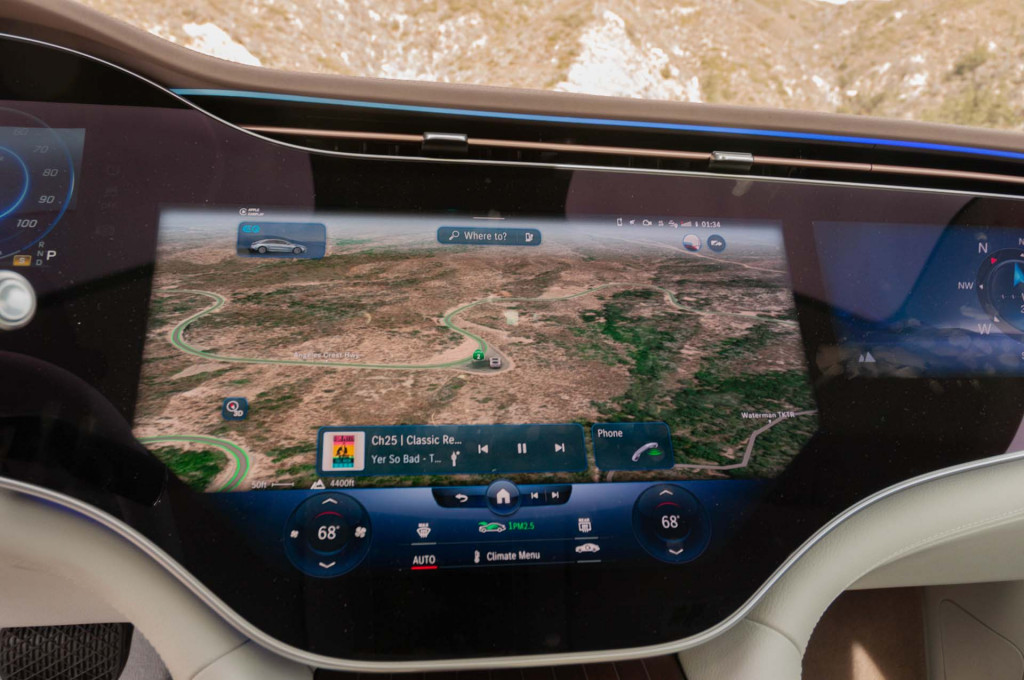 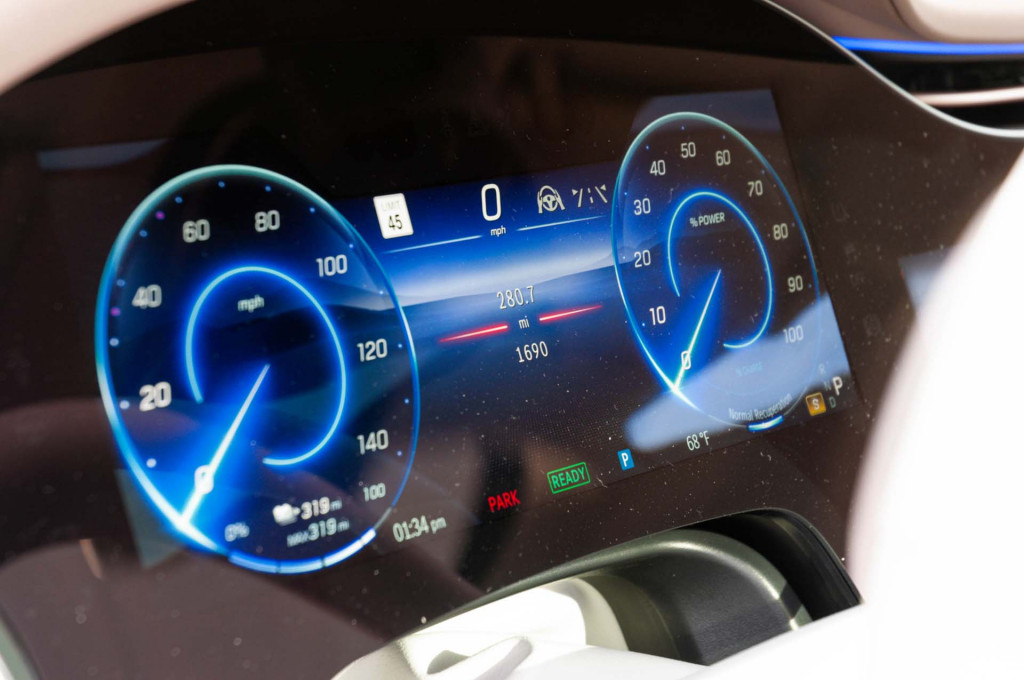 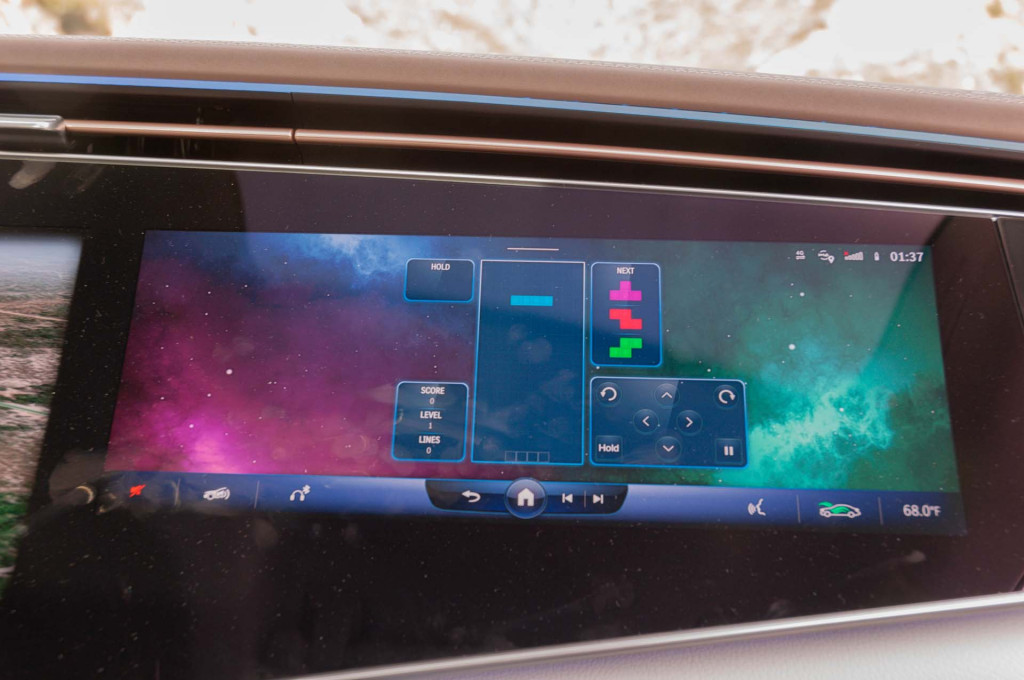 There are three screens—a 12.3-inch digital gauge cluster, 17.7-inch central display, and 12.3-inch touchscreen for the front passenger—and as cool as they are, they’re altogether distracting as all get-out. There’s a wow factor at first, and then it’s immediately overwhelming to use. It took some time, but I did get comfortable using it. But the entire setup never felt necessary. The user experience is the opposite of what one will find in the Lucid Air, which feels cool but functional. Hyperscreen seems to be cool for the sake of being cool. 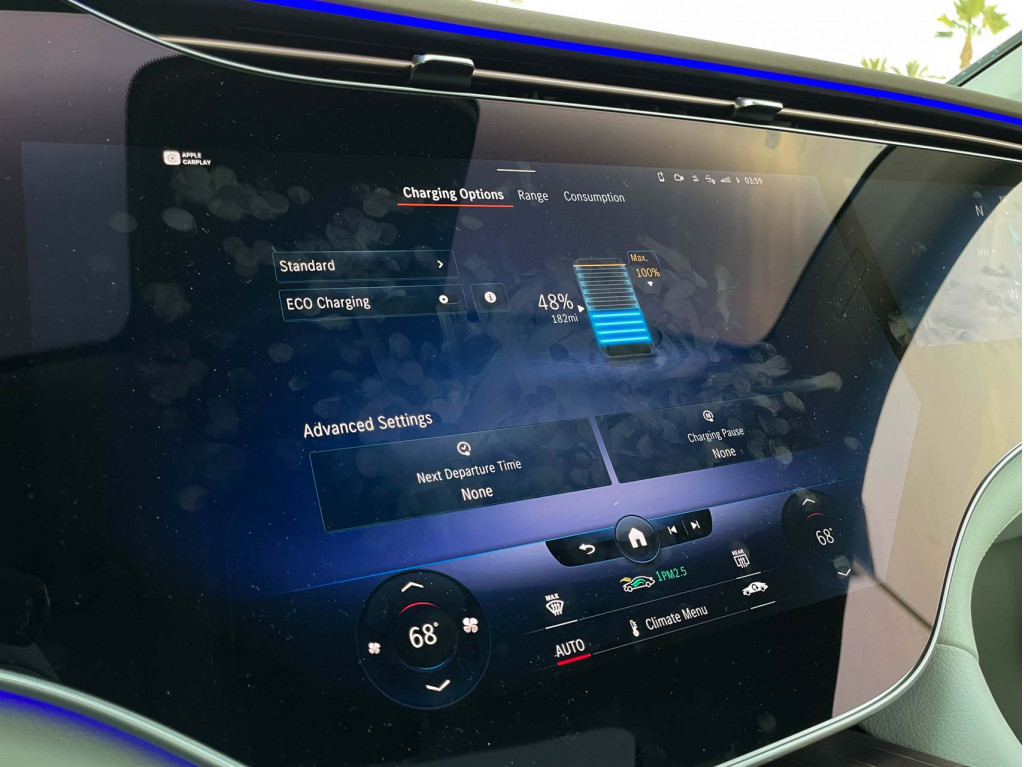 Surprise and delight. That’s what a luxury car should do, and in terms of range, the EQS does just that. The 450+ model tested had an EPA range rating of 350 miles. In mixed driving around Los Angeles with a heavy foot I drove 255 miles, taking the EQS from an initial 92% state of charge to 17%, with the car stating it had another 71 miles of range left. After charging to 100% I pushed the luxury hatchback harder than any EQS owner likely will the entire run through Angeles Crest outside LA, then around the city, back through Pasadena and over to Burbank. That hard-driving total of 150 miles used only 52% of the battery’s juice. Rough math says even while not being driven gently the EQS could’ve gone about 350 miles. This same route nearly depletes a Taycan’s battery. With a light foot, or even just driving like a normal human, it’s clear the EQS easily matches its EPA range rating. We want some more seat time to test the range, but on first blush, the EQS seemingly is more efficient than advertised. 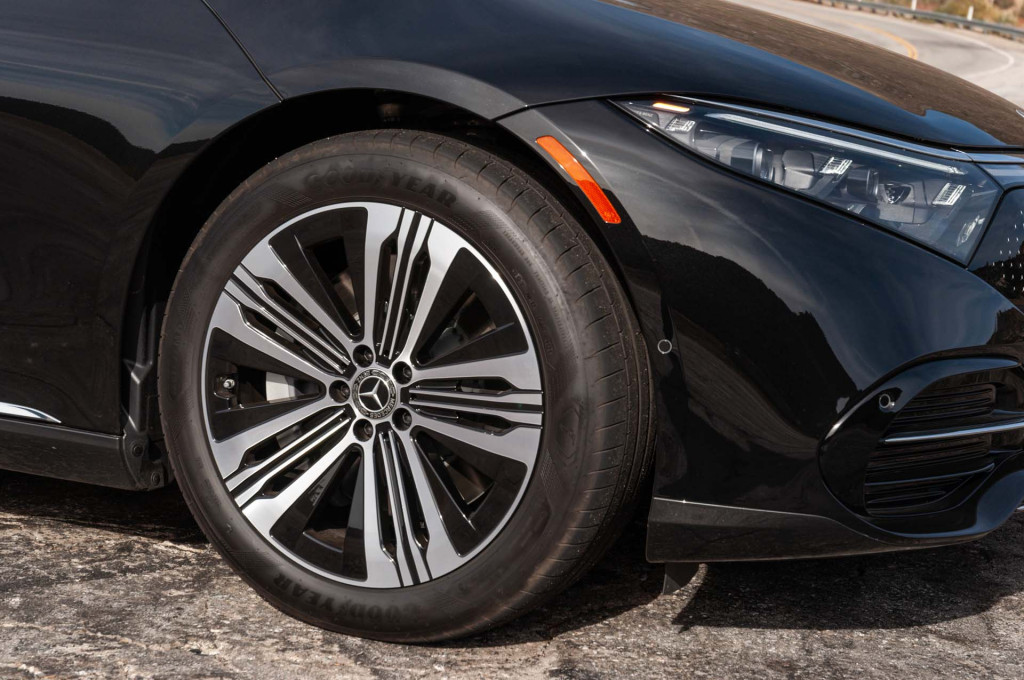 The worst part of the EQS are the brakes. They are mushy. The system starts with regenerative braking for the first part of the brake pedal’s travel and then transitions to friction braking. The transition point is like pushing through an imaginary wall. While the brakes never faded, or even smoked, while being pushed hard up Angeles Crest, they never inspired confidence and were hard to predict. The tuning of the brake system might be one of the worst on the market today. 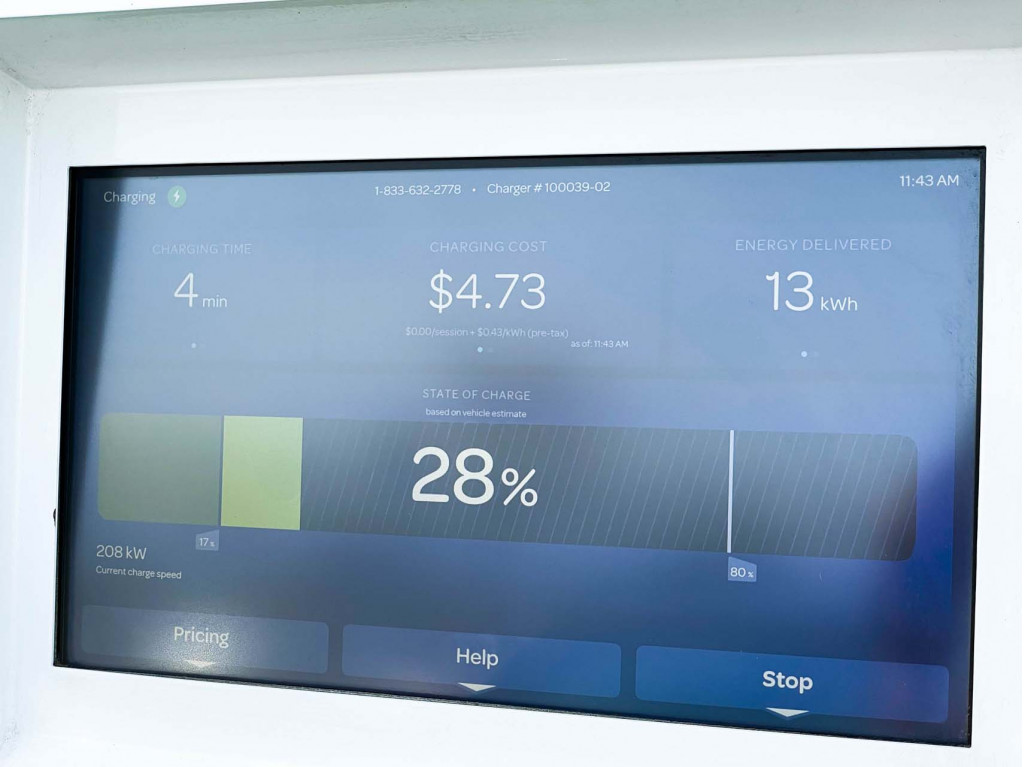 Mercedes-Benz said the EQS has a peak charge rate of just over 200 kw, and it wasn’t kidding. At a 350-kw Electrify America charger I witnessed the EQS hit a peak charge rate of 208 kw, and the EQS runs on a 400-volt electrical architecture rather than on a circa-900-volt system like the Lucid Air. The charge rate settled around 165 kw. At 94% state of charge the juice was still flowing at 35 kw. It took 55 minutes to recharge from 17% to 100%. That experience is something Ford Mustang Mach-E buyers can only dream about as it’s that last 20 to 30% that can be tedious for EV drivers who need a full charge to make a next station. 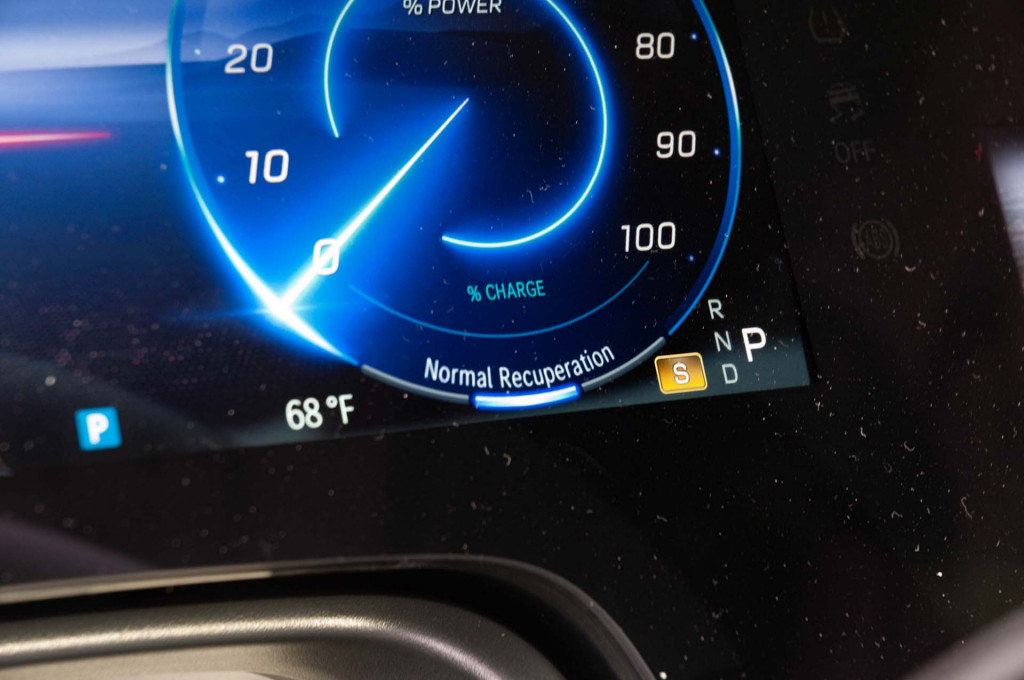 The EQS has a memory problem: It couldn't remember my drive settings. To be fair, this is a problem in other Mercedes-Benz products, including AMGs, when it comes to drive settings. But in an electric car this issue is more egregious. Want to one-pedal drive the EQS? Every single time you start the car—with a start button you have to press each time—the steering wheel paddle has to be pulled to engage more regenerative braking. Don’t like that the air suspension wallows on the highway in Comfort mode? Put the suspension in sport mode when customizing Individual mode, or, the entire powertrain into Sport mode. But you’ll have to do this each and every time the car’s turned on. This is annoying, and should be a set it and forget it powertrain option like in a Mustang Mach-E or Tesla.

For an out-of-the-gate effort with the latest technology, the EQS pushes Mercedes-Benz into the next era with a true electric luxury flagship. It doesn’t have a yoke—thank heavens—or Ludicrous speed, but it has class, which is something a six-figure car parading as a luxury car should have.