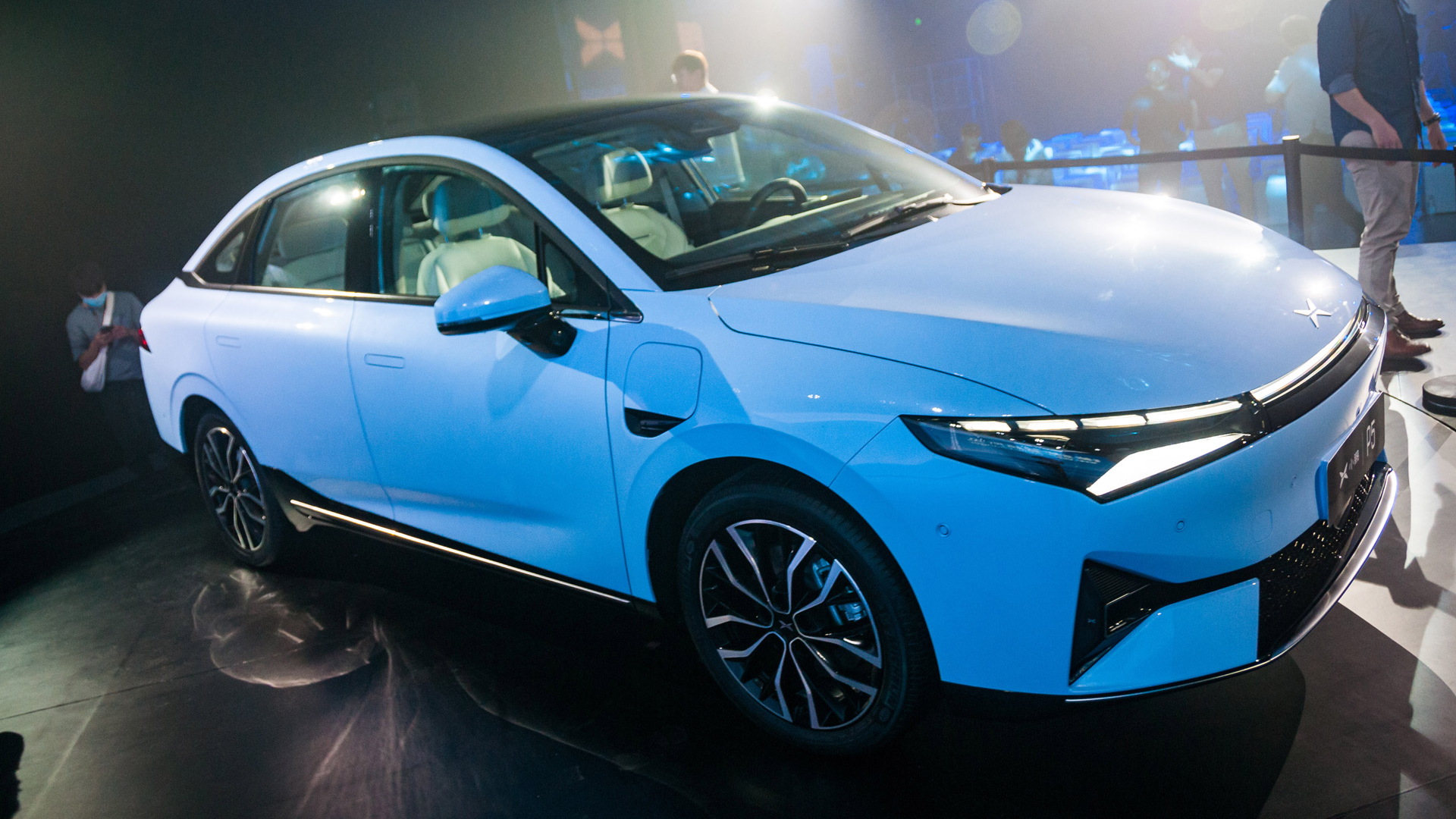 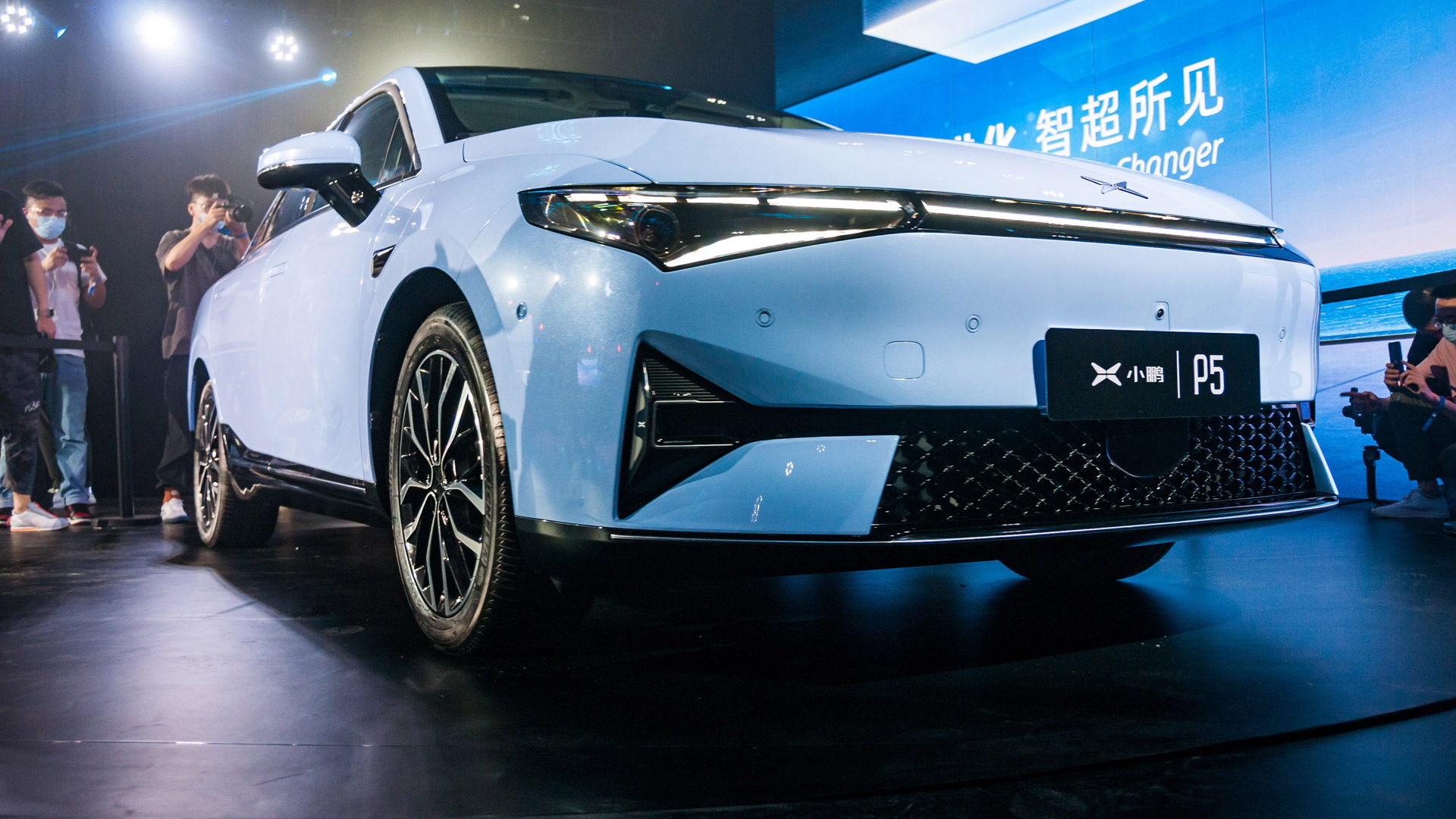 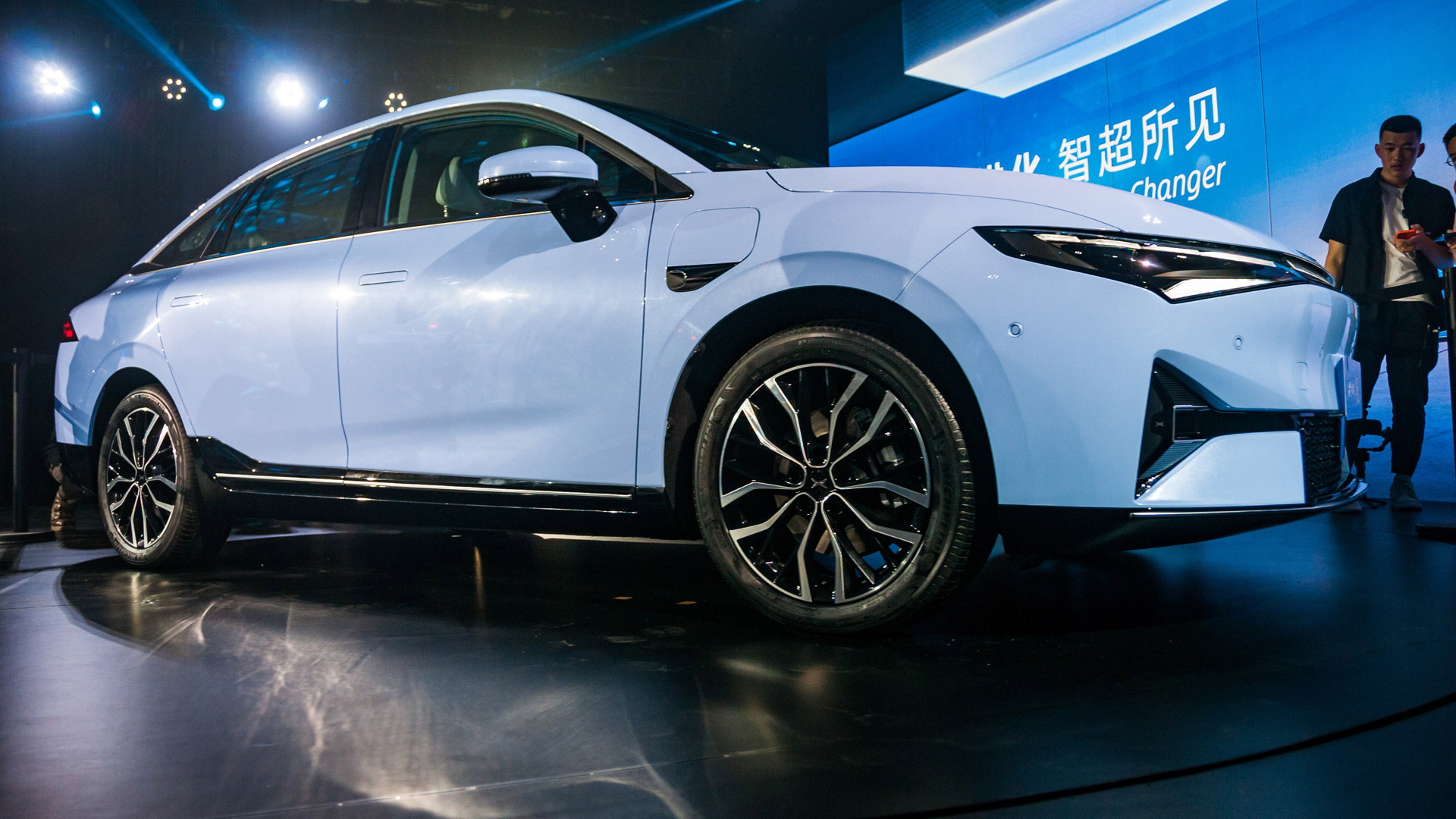 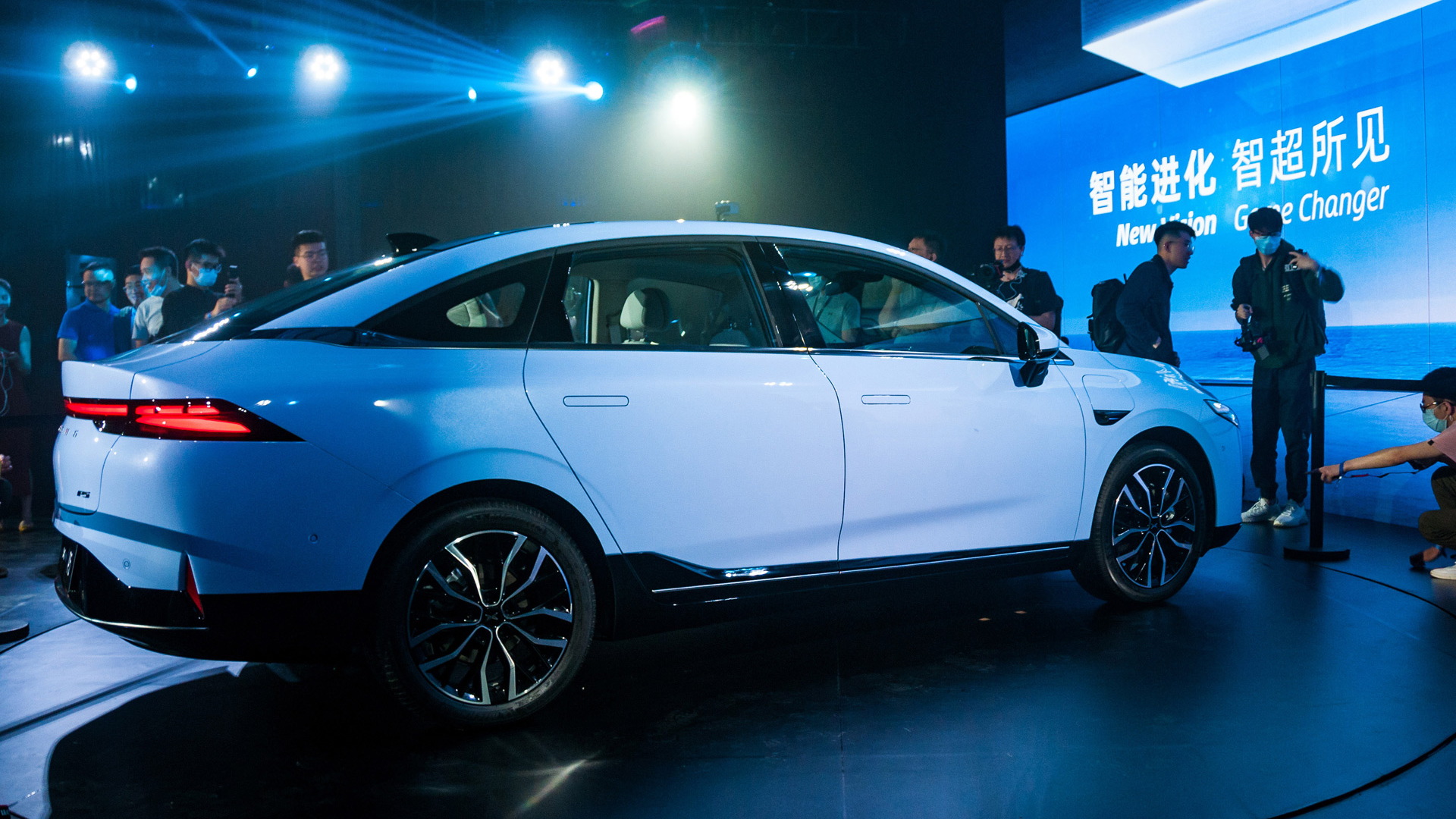 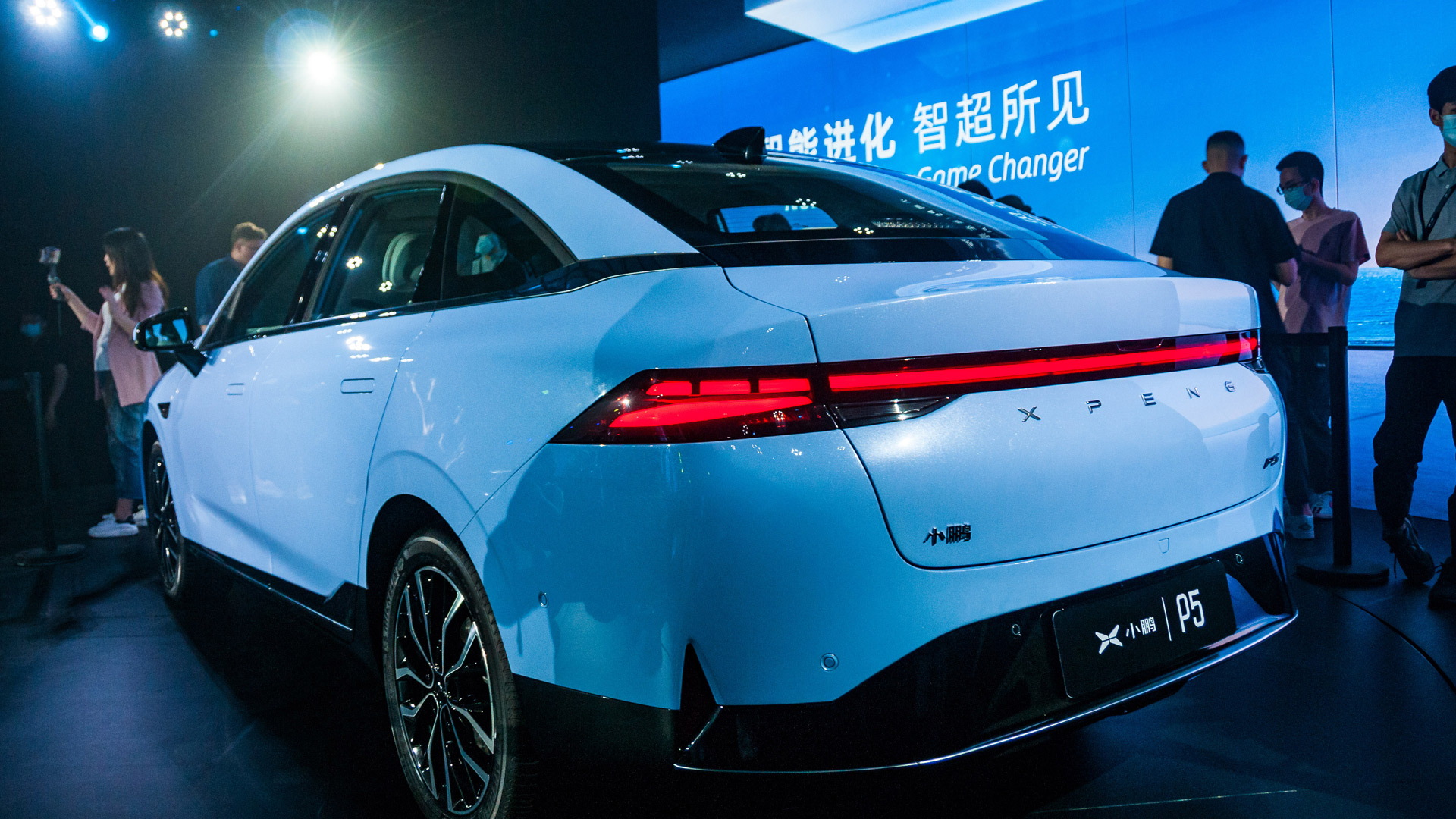 A rising star in China's burgeoning electric-vehicle segment, Xpeng, has launched its third model on the market, a battery-electric compact sedan not unlike the Tesla Model 3.

Called the P5, the new sedan is a smaller sibling to Xpeng's P7 which is already on sale in China, and it was shown to the world for the first time in April during Auto Shanghai 2021.

On Wednesday, the company started sales of the P5 and confirmed the start of deliveries for October. It's priced to start from just 157,900 yuan (approximately $24,500), after incentives.

While there are many credible electric vehicles starting to emerge from China, the Xpeng P5 stands out as being the first production car in the world with built-in lidar sensors. They are included on the range-topping 550P and 600P grades, priced from 199,900 yuan and 223,900 yuan, respectively.

The P5 uses two lidar sensors, one positioned on either side of the front fascia. According to Xpeng, they are able to distinguish between pedestrians, cyclists and scooters, static obstacles, and road works, including in tunnels and during night driving and poor weather.

Lidar works similar to radar but uses laser light pulses to gauge the physical environment, as opposed to radio waves in the case of radar. Most companies developing self-driving systems plan to use lidar in combination with other types of sensors, though Tesla and its CEO Elon Musk have dismissed the technology, claiming it's a waste of money. Instead, Tesla will rely on cameras, radar, and other sensors.

One of the biggest issues has been cost. Not long ago, a lidar sensor cost about $75,000. Prices have come down in recent years, though, to the point the technology is now commercially viable for cars. Volvo has said its next-generation XC90 due in 2022 will also feature built-in lidar.

In the case of the P5, the lidar sensors, together with 12 ultrasonic sensors, five millimeter-wave radars, and more than a dozen cameras, are used by a suite of electronic driver-assist features grouped under the Xpilot banner. One of these features is Navigation Guided Pilot (NGP), which Xpeng in March demonstrated over 1,800 miles of Chinese highways using the P7 sedan. After compiling the results, the company found that the system required on average just 0.71 corrections per 62 miles.

The version of NGP debuting in the P5 is even more advanced, as it can handle some functions in city driving, such as lane changes, automatic following, and recognition of speed limit and traffic light information. The system can also memorize parking locations in some situations and, according to Xpeng, can automatically park the car.

All P5 grades, six in total, come standard with a single electric motor rated at 207 hp and 228 lb-ft of torque, or enough for 0-62 mph acceleration in about 7.5 seconds. There are three battery sizes, ranging from 55.9 to 71.4 kilowatt-hours in capacity.

One final standout feature of the P5 is its reconfigurable interior. Owners can add options that enable the cabin to become a lounge with a movie projection screen or a sleeping compartment. There are also options for a built-in fridge and fragrance control.

While we're unlikely to see Xpeng enter the U.S. market anytime soon, the automaker has already started exports of its P7 sedan and G3 crossover to Norway and plans to enter more European markets in the near future.