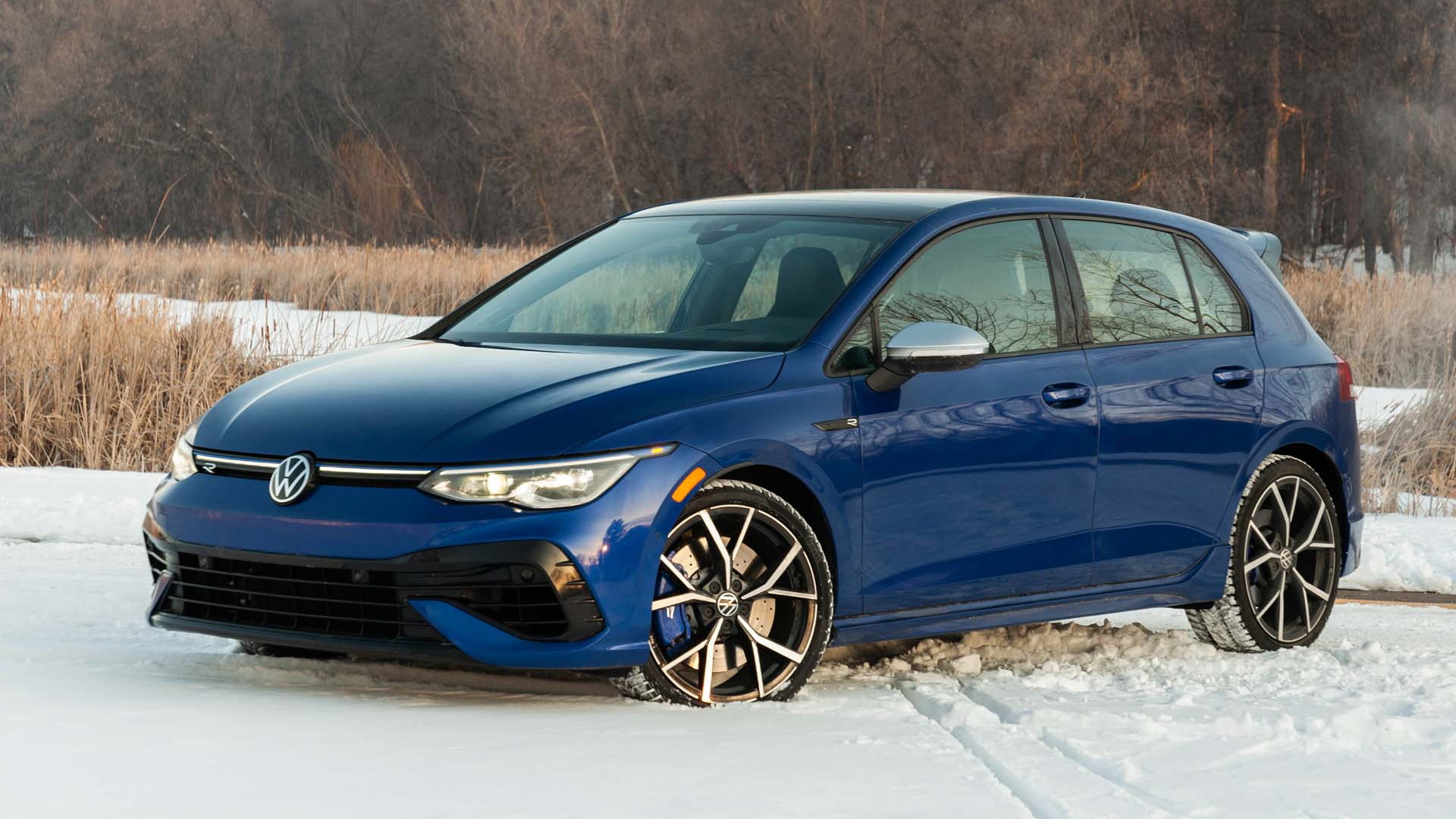 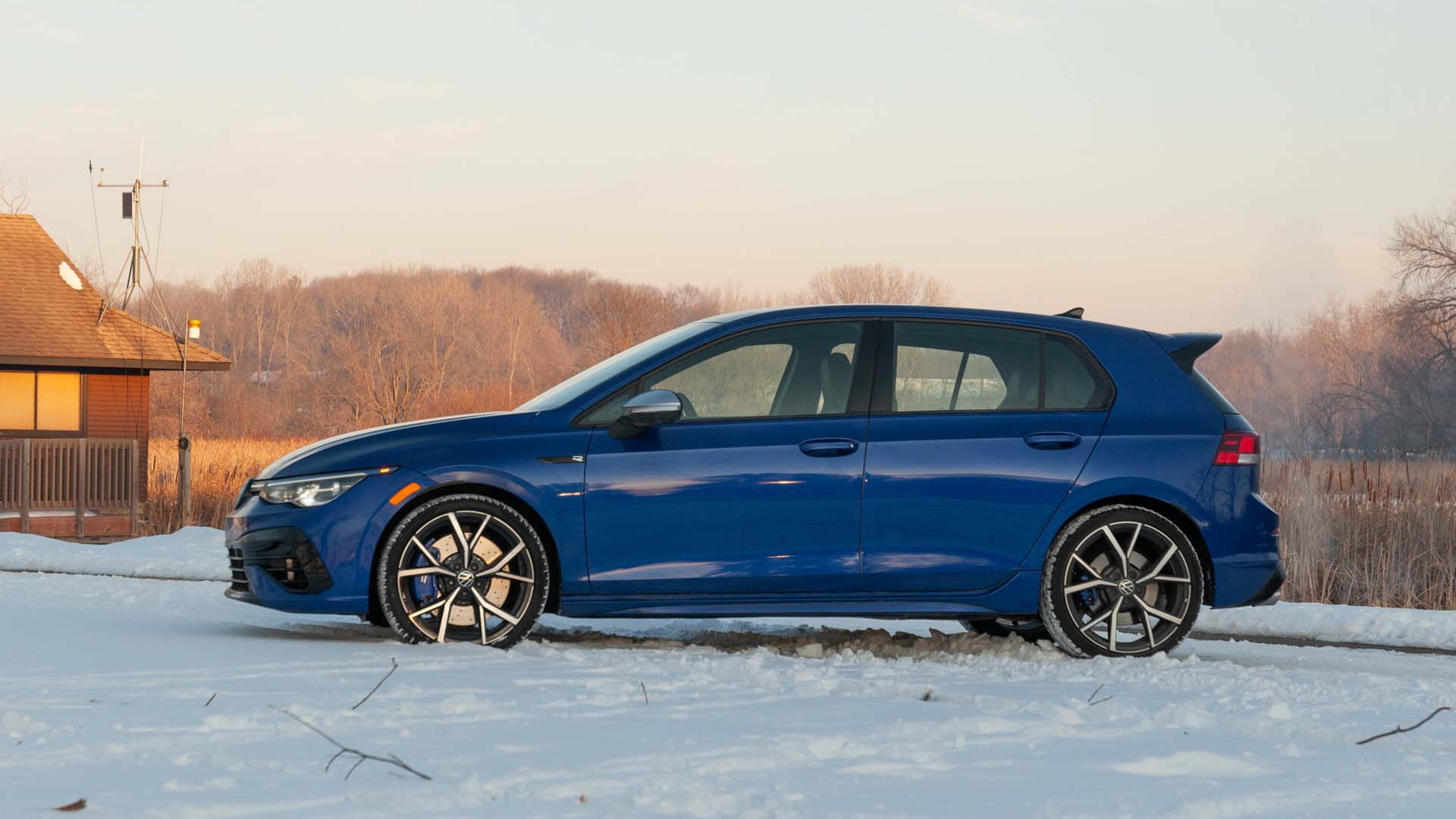 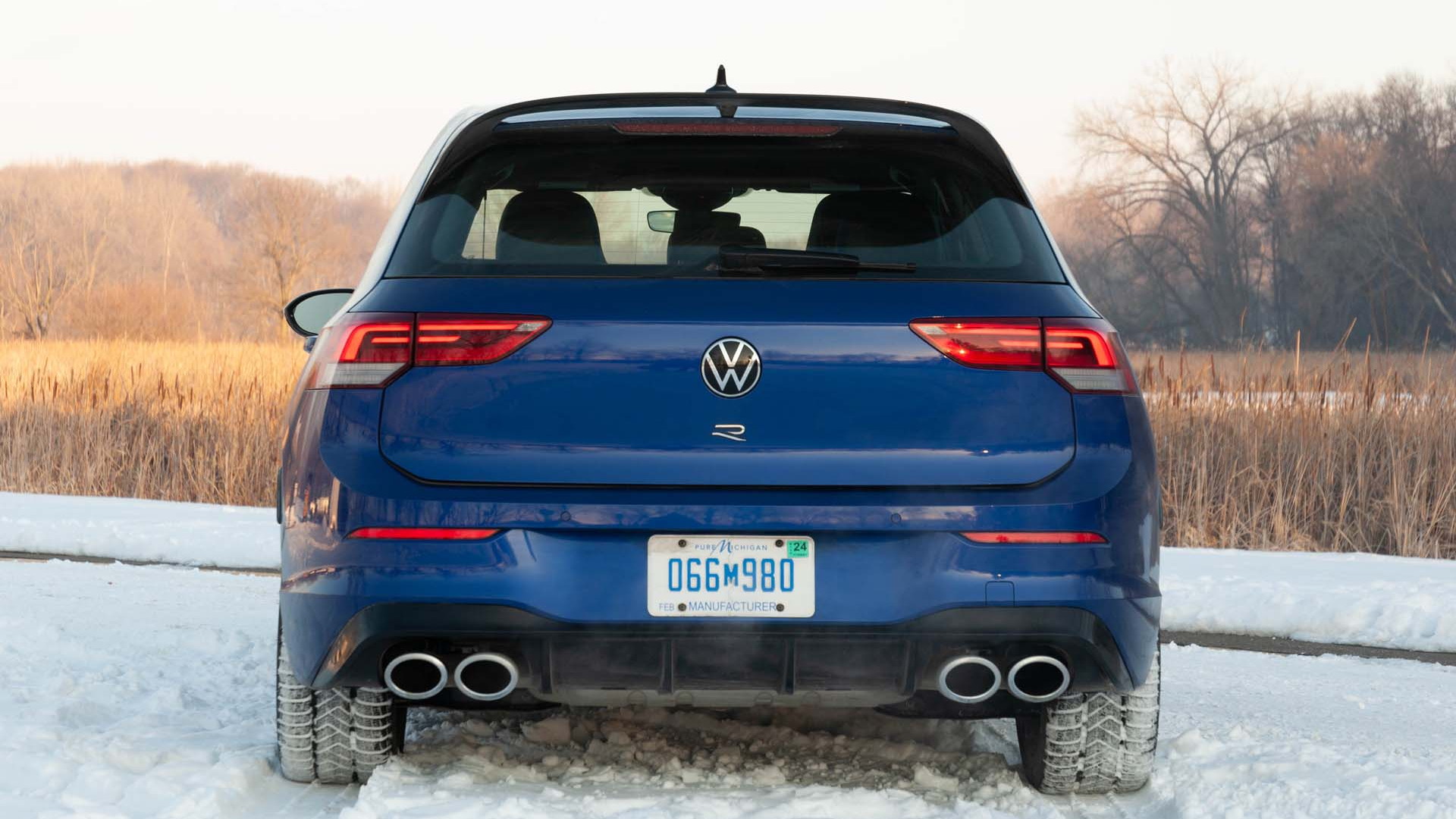 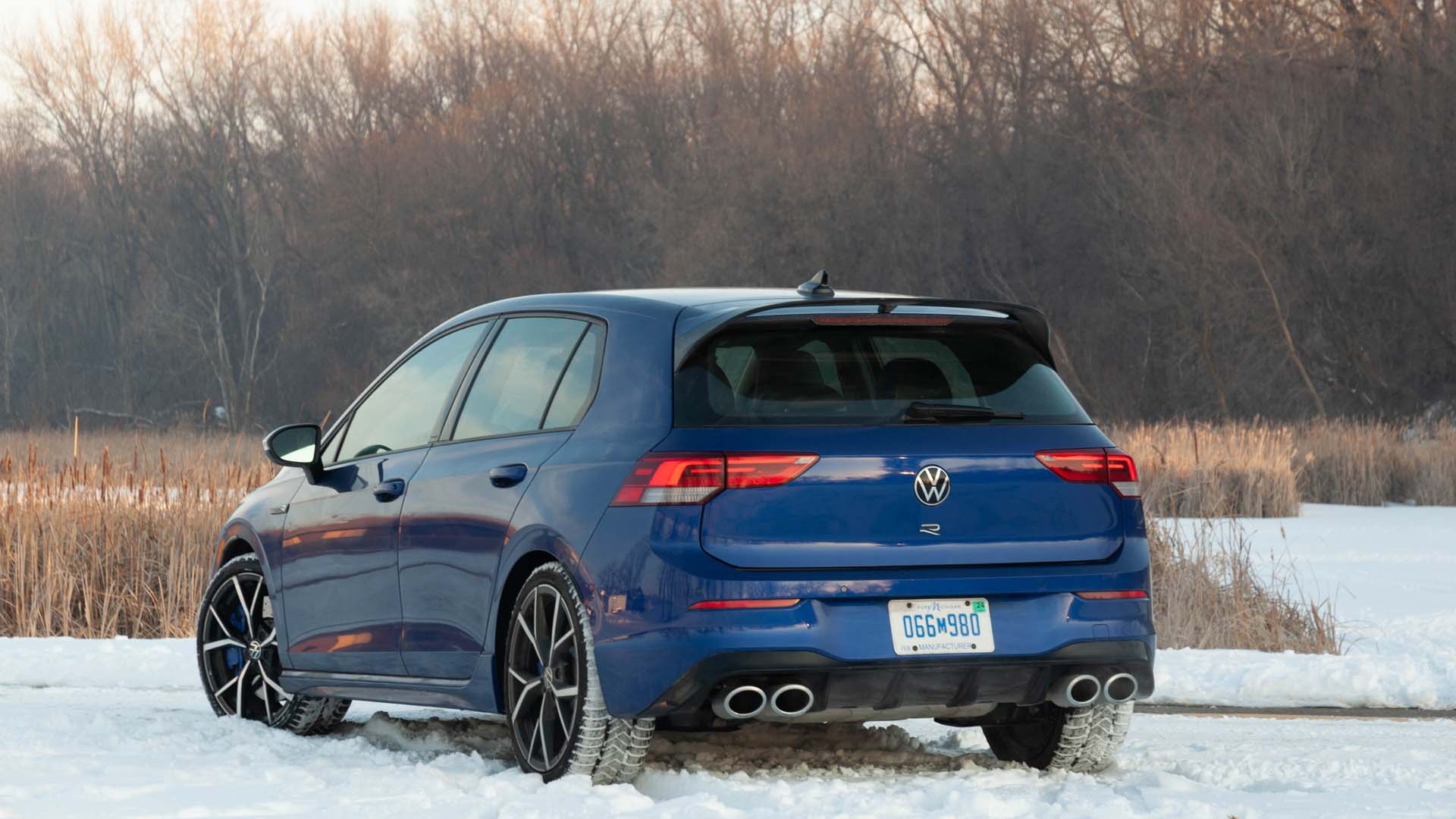 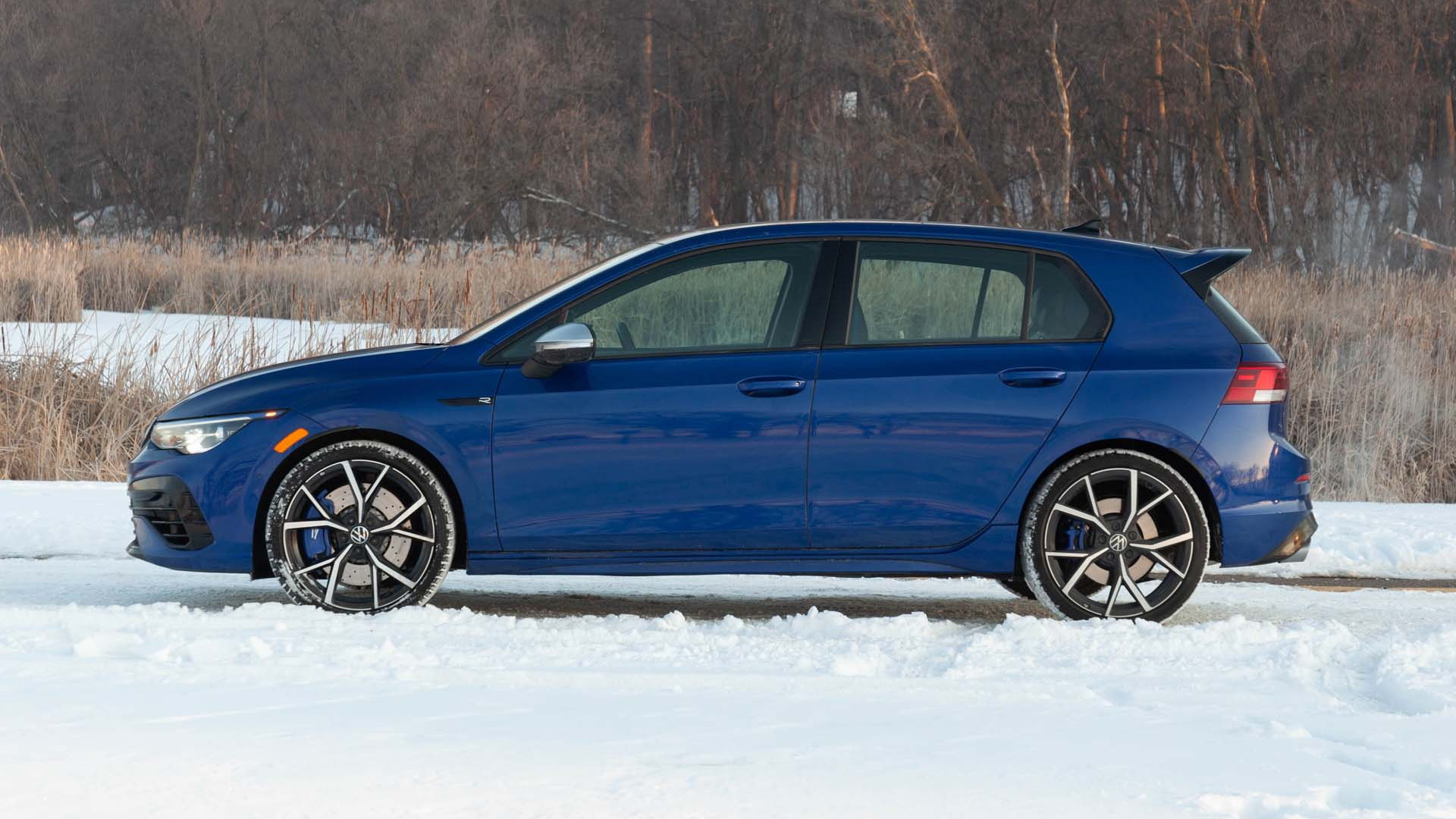 My mother always said, “nothing’s perfect, Joel.” Mom tends to be correct most of the time.

In the case of the 2022 VW Golf R, Mom’s sage advice proves to be correct once again.

In the lead up to the debut of the fifth-generation Golf R, VW promised more power, more performance, and more technology. After driving the hot hatch for a week, I can confirm it hits on the first two, but it misses on the last. The new Golf R drives and performs wonderfully, but now it has a flaw in a class packed with other fun but flawed cars.

Like the outgoing Golf R, the new model is powered by the EA888 2.0-liter turbo-4, but now it makes 315 hp and 310 lb-ft of torque (up from 288 hp and 280 lb-ft). It emits a more subdued note from its quad exhaust tips than the prominent buzz of the new Subaru WRX, even with the active exhaust baffles open in Drift mode. The turbo spools quickly with power coming online just over 2,000 rpm with the tach spinning quickly after. Volkswagen says the Golf R’s capable of spring from 0-60 mph in 4.7 seconds and that feels about right.

While a 7-speed dual-clutch automatic transmission is available, my tester had the slick-shifting 6-speed manual, which has smoother throws than the notchier 6-speed in the WRX. Annoyingly, in the name of efficiency the digital gauge cluster constantly encourages skip shifts thanks to the low-end torque. Please, #GiveAShift.

The upgraded all-wheel-drive system has a new twin-clutch rear differential that enables torque vectoring. Volkswagen said up to half the power can go to the rear. While that may be true, the Golf R, at its core, is still a front-wheel-drive-based hot hatch. The all-wheel-drive system works full time, and a visual display in the gauge cluster shows that torque goes to all four corners all the time. However, on a hard launch, I was able to easily spin the front tires multiple times. While sliding sideways in a snow-covered parking lot, Drift mode still tried to pull the car around rather than let the rear wheels push it, and snow flew much higher off the front wheels than the rears. Still, it was possible to do donuts. It may be sophomoric, but I highly recommend it.

Volkswagen upgraded the MacPherson strut front suspension with a 6.6-pound lighter aluminum front subframe, increased negative camber to 1.2 degrees, revised the wheel mounts and control arms, installed new bushings, and made the front and rear stabilizer bars 10% siffer. These changes were hard to truly notice on frozen, heaving Midwest pavement, but the new adaptive dampers weren’t. They default to Sport mode upon startup, which balances controlled body motions with a ride that isn’t overly stiff or jarring. It’s firm, but more refined than the WRX. Tapping the blue R button on the steering wheel brings up the drive modes on the touchscreen. Flipping the Golf R into Race or Drift mode stiffens everything and ensures every crack in the road while never ruining the hot hatch’s adult demeanor. Even in its stiffest setting it is more refined than the rally-bred Subaru.

VW said the electric-assist power-steering system is tuned for more direct response and increased comfort. It keeps the same 14:1 ratio as before but now requires just 2.1 rotations lock to lock. I found it direct and less darty than the WRX, but it was hard to get a true sense of feel due to the Pirelli SottoZero 3 winter tires on my tester and the snow-covered roads.

The Golf R has always been the adult of the hot-hatch group, and that hasn’t changed. It still doesn’t have a silly big wing, crazy side sill extensions, or massive diffusers. It’s a restrained, attractive hatchback that gives little indication of its performance potential. LED lighting now spans the width of the front end, demanding everyone know this thing is in the same family as the electric ID.4.

The interior’s control layout adopts VW’s ill-conceived system that debuted in the electric ID.4 crossover. The steering wheel has a set of weird capacitive touch-and-click controls. Are they capacitive or are they buttons? The infotainment interface on the 10.0-inch touchscreen looks like something from Apple, but its interface isn’t intuitive once you dig past the homescreen. Changing vehicle settings is confusing because it relies on tapping graphics of the virtual car. The worst part is the use of capacitive sliders, which aren’t backlit to show up at night, for the radio volume control and climate controls. Hit a bump while changing the volume and it might just crank up to 11, prompting your significant other and/or children to scream at you, which absolutely happened. VW also groups the climate control defrost functions to the left of the steering wheel with the headlight controls, which makes no sense.

The confounding controls and interfaces in VW’s futuristic electric crossover seem out of place in an enthusiast hot hatch.

The Golf R starts at $44,640, $3,350 more than the last model, but VW has cheapened the new model in a few ways. While there’s less shiny piano-black plastic inside, the gas hood strut has been replaced by a manual rod, and the engine cover is no longer embossed with any label. It’s also baffling that the rear hatch can’t be opened when the engine is running.

Despite that corner cutting, there’s a reason the 2022 VW Golf R costs significantly more than the Honda Civic Type R, Hyundai Veloster N and Elantra N, or the latest Subaru WRX (though, the STI model hasn’t debuted yet). The driving experience is more refined than all of those competitors and the design still flies under the radar, but it would be hard to live with those controls, just like it would be hard to live with the Civic Type R’s boy racer looks, the low-rent interiors of the Hyundai N models, and the lack of sound deadening in the Subaru WRX and likely the STI.

Feel free to call Mother Feder, VW, as she’s full of wisdom and she will probably recommend a volume knob and backlit controls.