On Friday, Rivian released a video of its R1T electric pickup truck undergoing testing on the Davis Dam Grade—the Nevada road used by the Society of Automotive Engineers (SAE) as the basis for its tow ratings. It's an indication that, just like manufacturers of gasoline and diesel pickups, Rivian is taking towing seriously.

Located along a stretch of Route 68 between Las Vegas and the Hoover Dam, the Davis Dam Grade ascends from 550 feet in elevation to 3,500 feet in just 11.4 miles. Add in typically high temperatures, and you get a true test of a truck's towing capability.

In the video, Rivian said the R1T can tow a 30-foot trailer loaded to 11,000 pounds over the grade. While the SAE test stipulates an ambient temperature of 100 degrees Fahrenheit and a minimum speed of 40 mph, the R1T did it in temperatures up to 118 degrees, and well above 40 mph, according to Rivian.

Engineers also took a pre-production R1T to California's Towne Pass for a towing test in Death Valley. This grade gains nearly 5,000 feet over 16.8 miles, equaling a gradient of 9.6%. Rivian also tested an R1T and trailer in the sand at nearby Dumont Dunes. 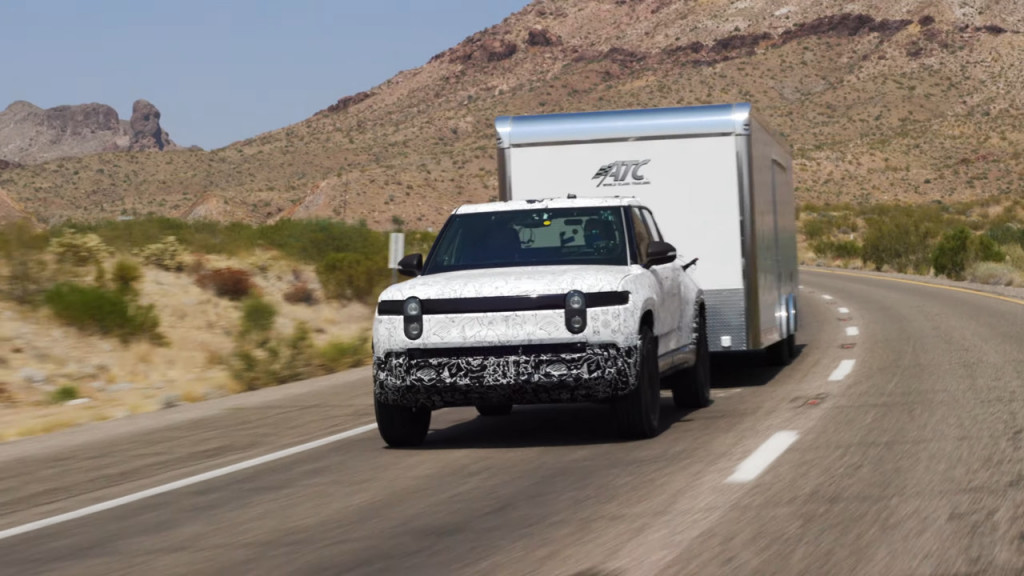 This capability comes at a price, though. In an accompanying blog post, a Rivian vehicle line manager noted that engineers generally see a range reduction of 50% when towing at full capacity. That's close to what Tesla Model X drivers have observed, and what Audi reported when it used a 2019 E-Tron to tow a 4,000-pound trailer (containing a rare General Motors EV1) between Tulsa and Austin.

The R1T is expected to get at least 400 miles of range with the largest 180-kwh battery pack. That would push range while towing to around 200 miles.

Towing a trailer requires a lot of extra energy, and most EVs simply don't have the needed energy storage capacity. This isn't a problem for gasoline and diesel vehicles because fossil fuels are so energy dense that it doesn't matter if they use twice as much energy while towing. Rivian is expected to compensate for this with DC fast-charging stations, as well as add-on battery packs that sit below a false floor in the bed.

In the meantime, Rivian is continuing final testing and validation of the R1T ahead of the start of deliveries in summer 2021.