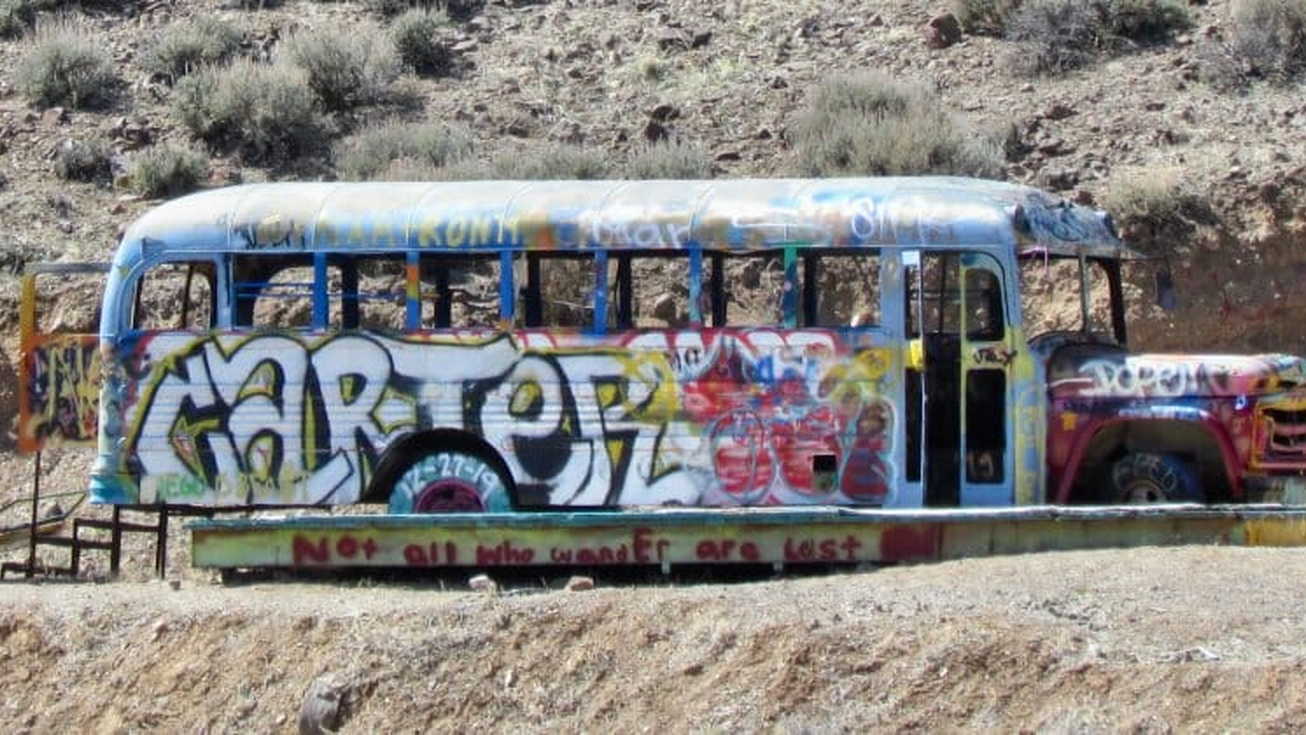 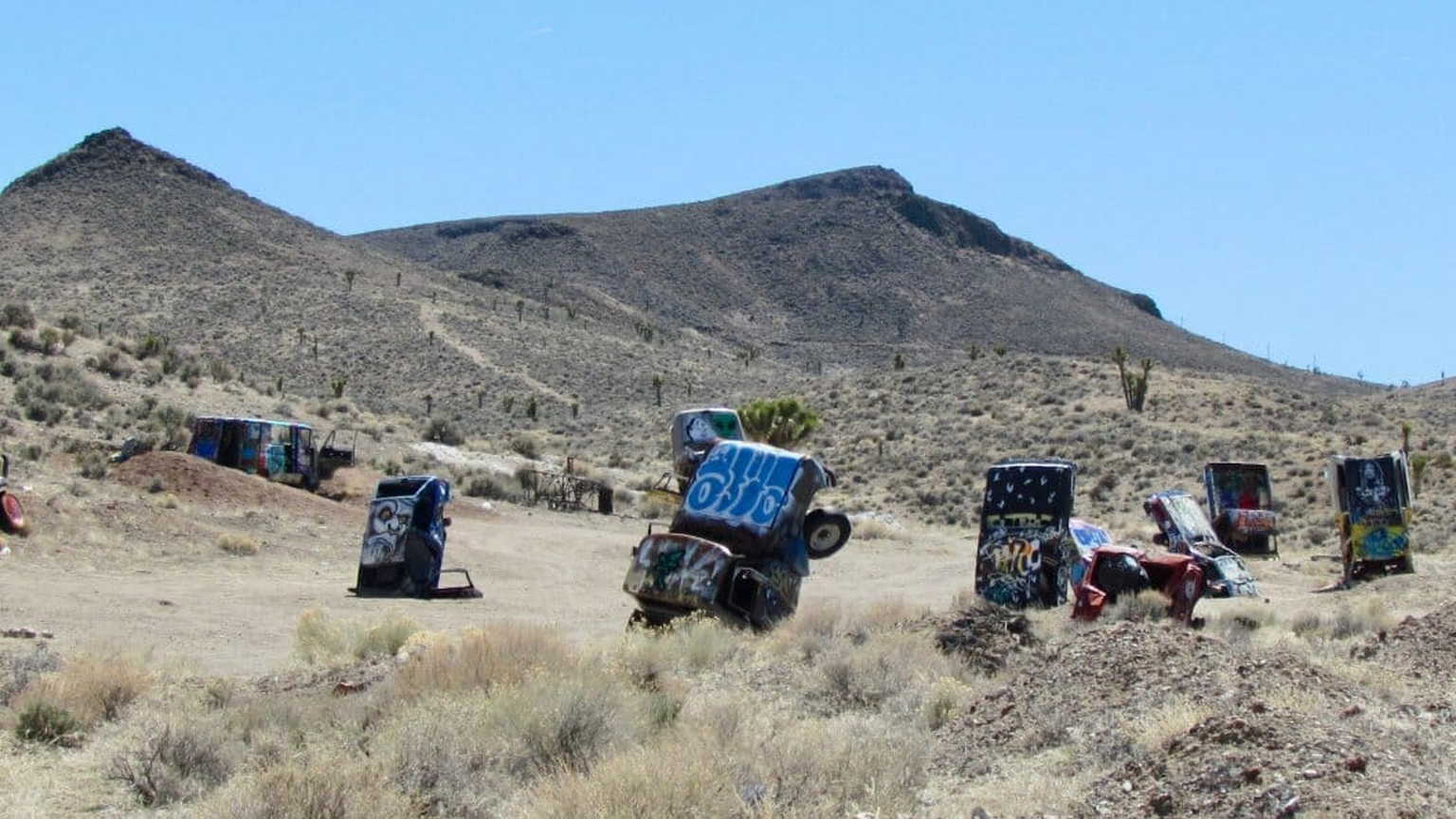 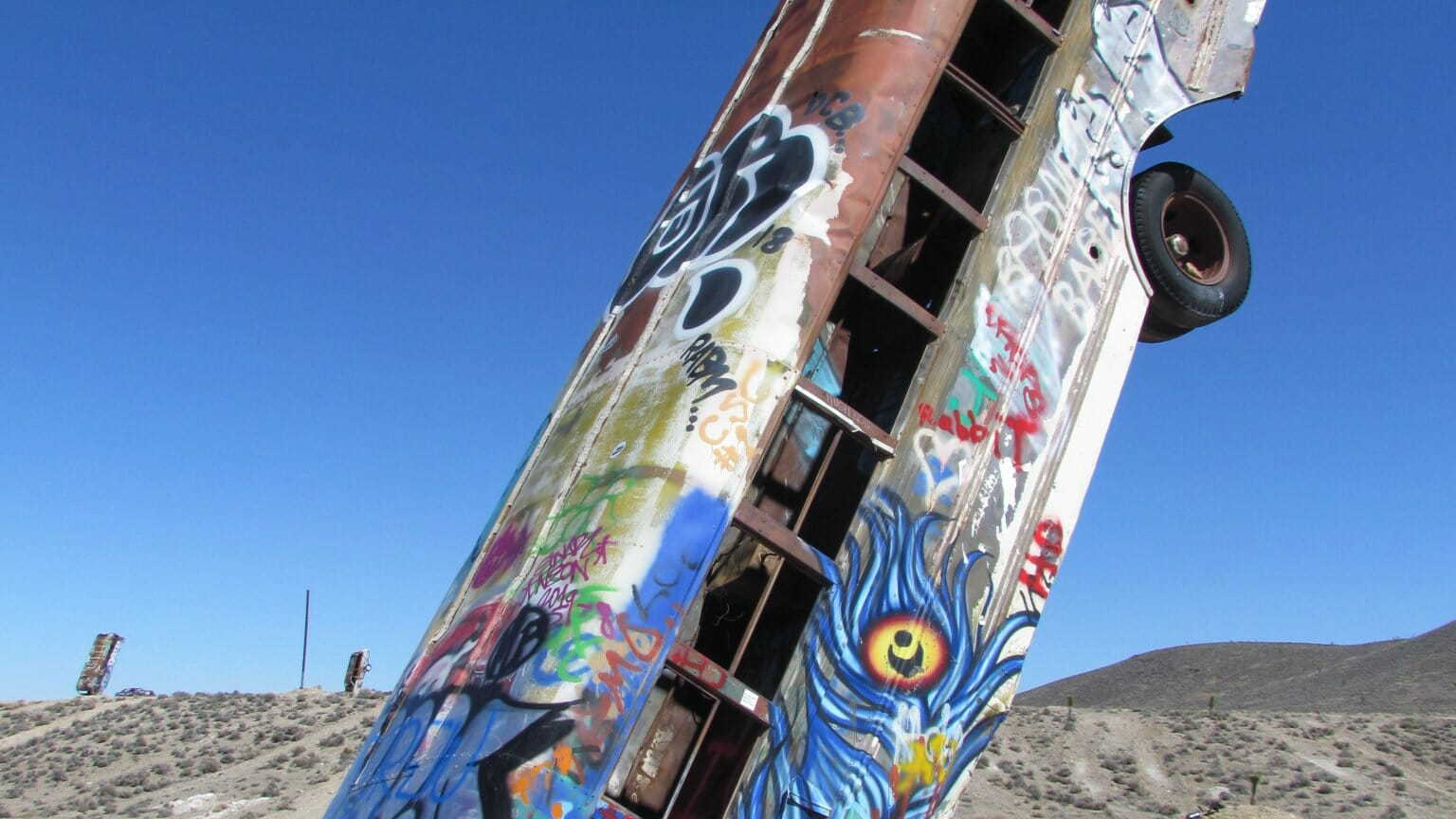 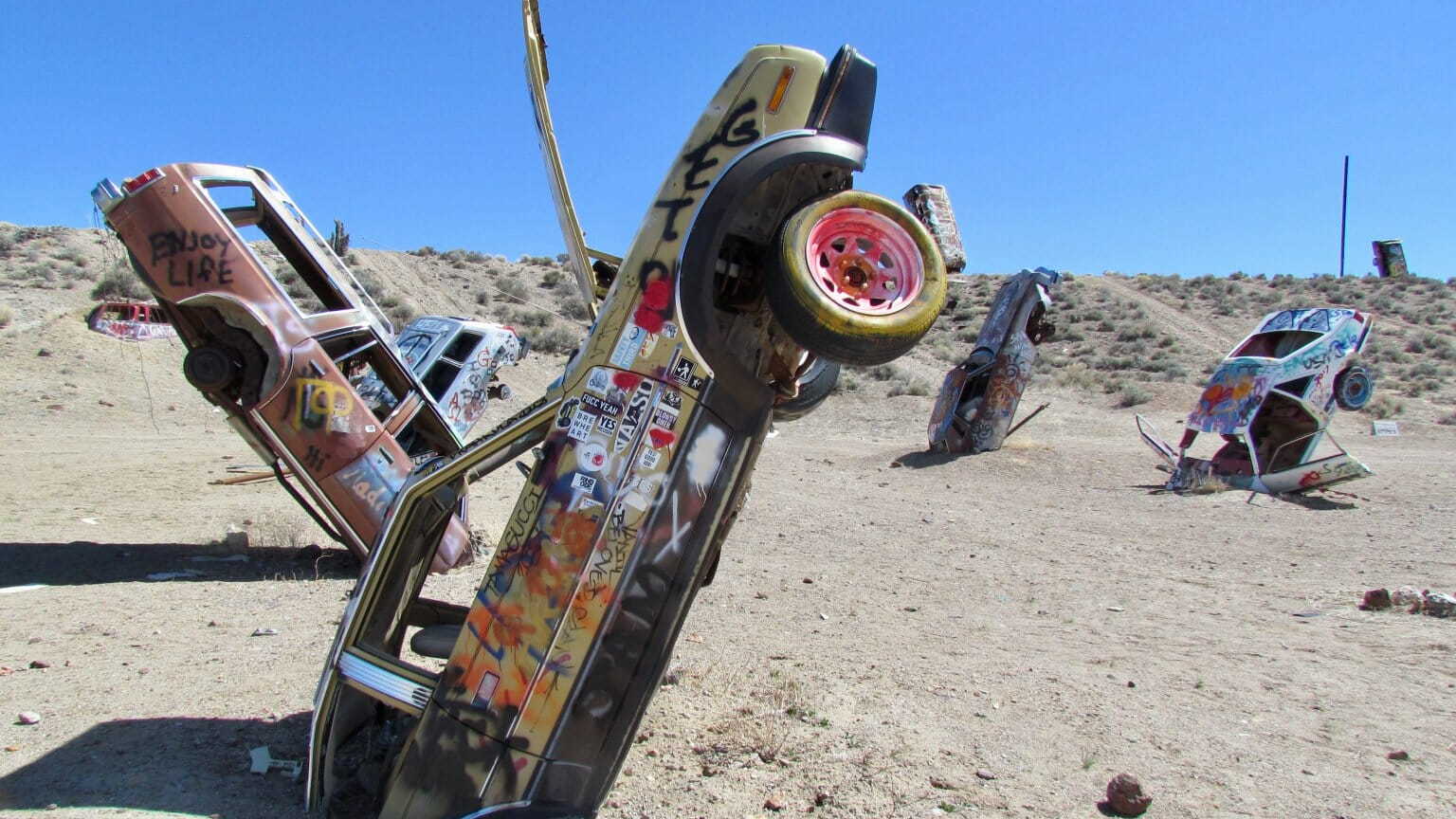 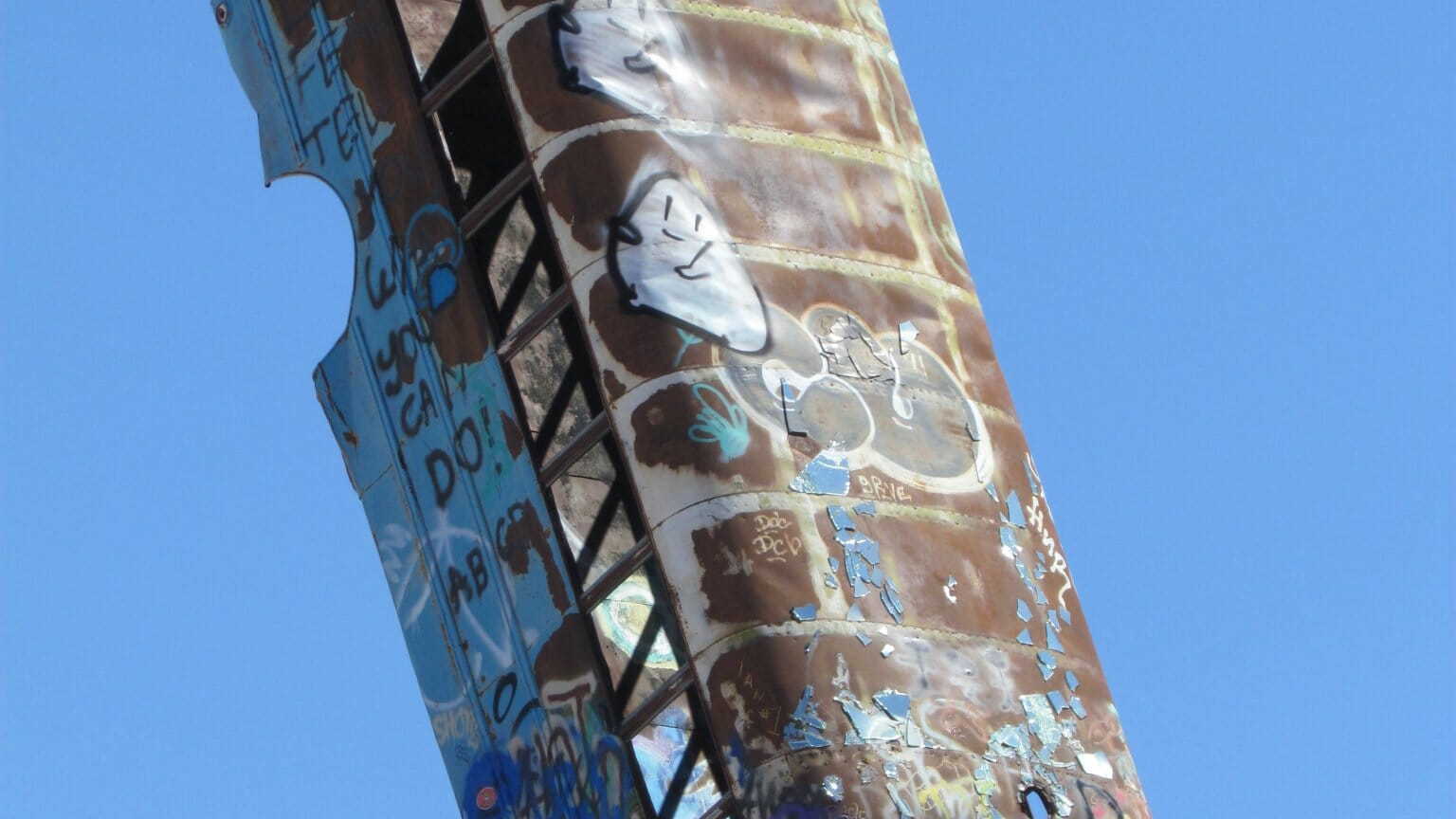 In 2004, artist Chad Sorg was driving a delivery van and setting up art displays on behalf of the Nevada Arts Council. While passing through Goldfield, he noticed that someone had partially buried a car, its tail pointed skyward much like the vehicles at Cadillac Ranch.

Sorg wanted a closer look and met Michael Rippie, a local resident who had used a backhoe to partially bury the car and who said he had 40 more in his nearby junkyard and that he wanted to create a car forest and be recognized by Guinness for the largest such display in the world.

Sorg, the artist, just wanted to paint the car.

Fast forward to 2011, when Sorg moved to Goldfield and, with Rippie and a friend, went to work completing Rippie’s dream. In 2012, they unveiled the National Junk Car Forest, which since has been re-christened as the International Car Forest of the Last Church. The Last Church is in recognition of Rippie’s religious beliefs.

With Cadillac Ranch in Texas and Carhenge in Nebraska, you can consider the International Forest part of the trinity of American outdoor automotive art installations.

Goldfield may seem a strange place for such an installation, but it is no more strange than a farm field west of Amarillo, Texas, or a hillside just outside Alliance, Nebraska.

Goldfield once was the largest city in Nevada. The town was named for the gold extracted from nearby mines. By 1908, it had five banks, three newspapers, a mining exchange, a 105-room hotel (in which half of the rooms had private baths), and was served by five railroads. It also had 20,000 residents.

Among those residents was George Lewis “Tex” Rickard, who had gone to Alaska for the Klondike Gold Rush in 1897, prospected enough to build a hotel and saloon and gambling hall, and also started promoting boxing matches. Gold attracted Rickard to Goldfield, where he opened the Northern saloon and casino.

(Rickard would go on to promote the world heavyweight bout between James Jeffries and Jack Johnson in Reno. He used proceeds from the fight to establish a huge cattle ranch in Paraguay in 1910, accompanied Teddy Roosevelt on an exploration of the Amazon basin, and returned to the U.S. in 1916 to promote professional boxing, primarily in Madison Square Garden. Rickard was responsible for building the third iteration of the famed sports arena in 1925 and was founder of the New York Rangers hockey team. He also was part of a group that built the Boston Garden sports arena and the Miami Beach Kennel Club.)

hough larger than Reno or Las Vegas at the time, Goldfield was all but consumed by disasters, first by a flash flood in 1913, and then by a fire in 1923 that destroyed 54 square blocks. Today, its 1907 courthouse still is in operation (Virgil Earp was a deputy sheriff in Goldfield), the hotel is undergoing renovation, and some 300 residents are joined by tourists each August for the Goldfield Days festival.

Goldfield is located on highway U.S 95, 255 miles southeast of Reno and 185 northwest of Las Vegas (or about 30 crow-fly miles northeast of Death Valley National Park). As you approach from the south on 95, look closely and you’ll see a small ground-bound sign with an arrow pointing to “Car Forest Visitor Area.” A steeply hilly dirt/gravel road (Crystal Avenue) takes you a few blocks to the east and then turns south to reveal several vehicles, including a school bus, partially buried, their tails toward the Nevada sky.

What appears to be a guardhouse — there is neither a guard nor an admission fee, though there is a box that accepts financial contributions — proclaims your arrival at the International Car Forest. A sign points out that you enter at your own risk and asks that you not climb on any of the vehicles.

With schools closed, we termed our visit to the Car Forest a home-school field trip. Joining me for the drive up from Las Vegas were my daughter and her three children. Much to the displeasure of my 9-year-old granddaughter, who once visited Cadillac Ranch with me, the cars in the forest already are painted and are to be left as is. Nonetheless, people sometimes “scrawl senseless lettering over art they can never hope to create,” a one-page flyer from the guardhouse reports.

The paintings on the cars have been done by Sorg and other artists, and they are meant to inspire.

The facility inspired clothing designer and Beatles scion Stella McCartney to shoot part of a fashion video in the car forest, which the Huffington Post has termed one of 11 therapeutic art destinations to see. Sorg was invited to present the forest in a TedX talk in 2019 at Carson City.

The forest is the subject of not one but two Facebook pages and a website as well as an art and book store at 306 Crook Ave, which is the name for U.S. 95 as it bisects downtown Goldfield.

As noted, I’ve been to Cadillac Ranch, and several times, since it is located adjacent to Interstate 40 in the Texas Panhandle, and I also once went a couple of hundred miles out of my way driving from a summer visit to Michigan back home to Phoenix just to visit Carhenge, which is located in that part of western Nebraska that is north of Colorado.

Cadillac Ranch is a hands-on art experience with visitors and spray cans of paint constantly altering the cars’ colorful display. Carhenge is an art installation, with the primary array of cars mimicking England’s ancient Stonehenge, but with other artwork sculptures made from cars and car parts. The Car Forest joins the automotive trinity as another but very different art installation, part Cadillac Ranch, part Carhenge.

Like Carhenge, you don’t just stumble across the Car Forest. You pretty much have to set out for it as a destination. But it’s worth the trip and is, indeed, a destination of inspiration.