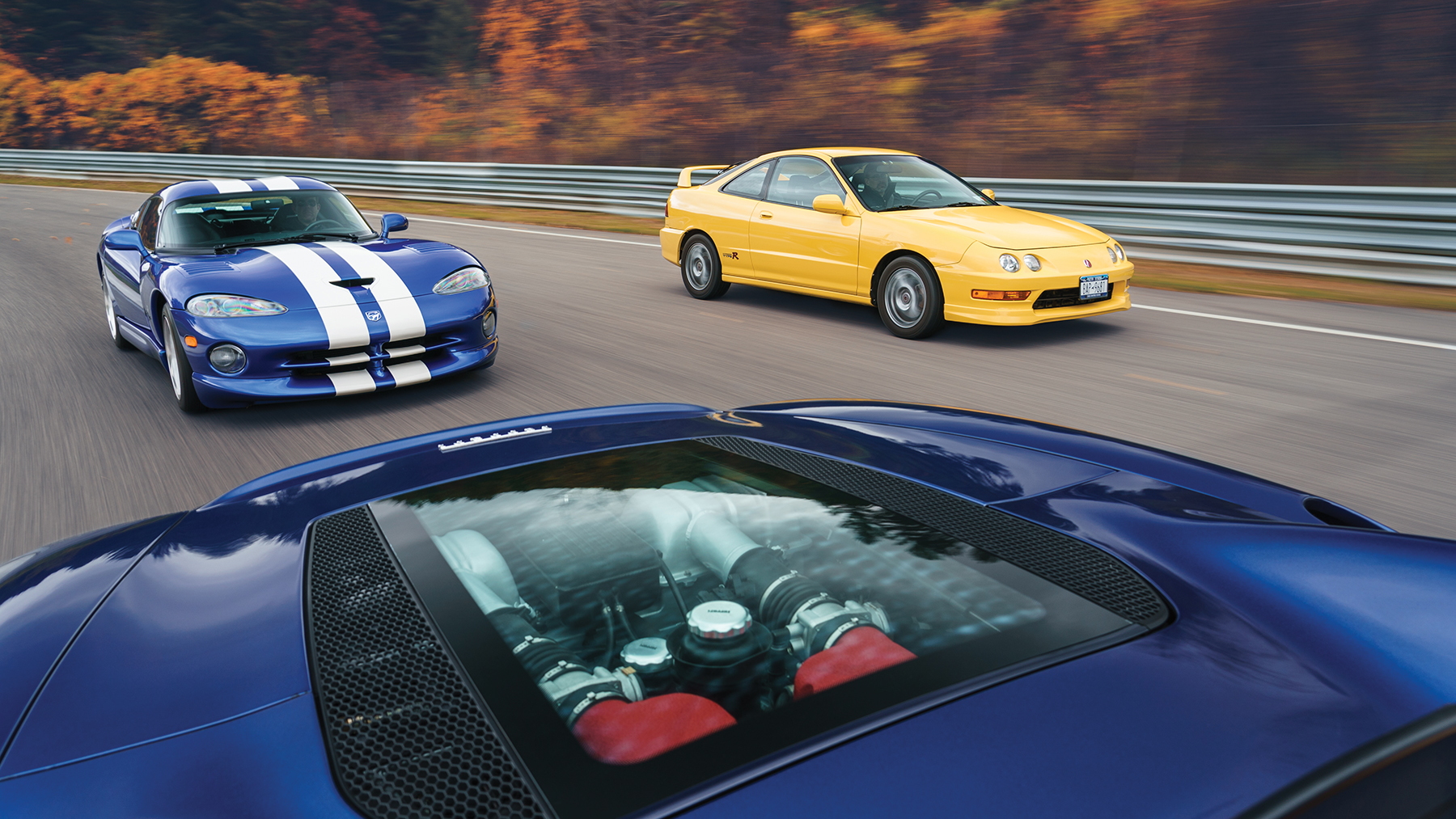 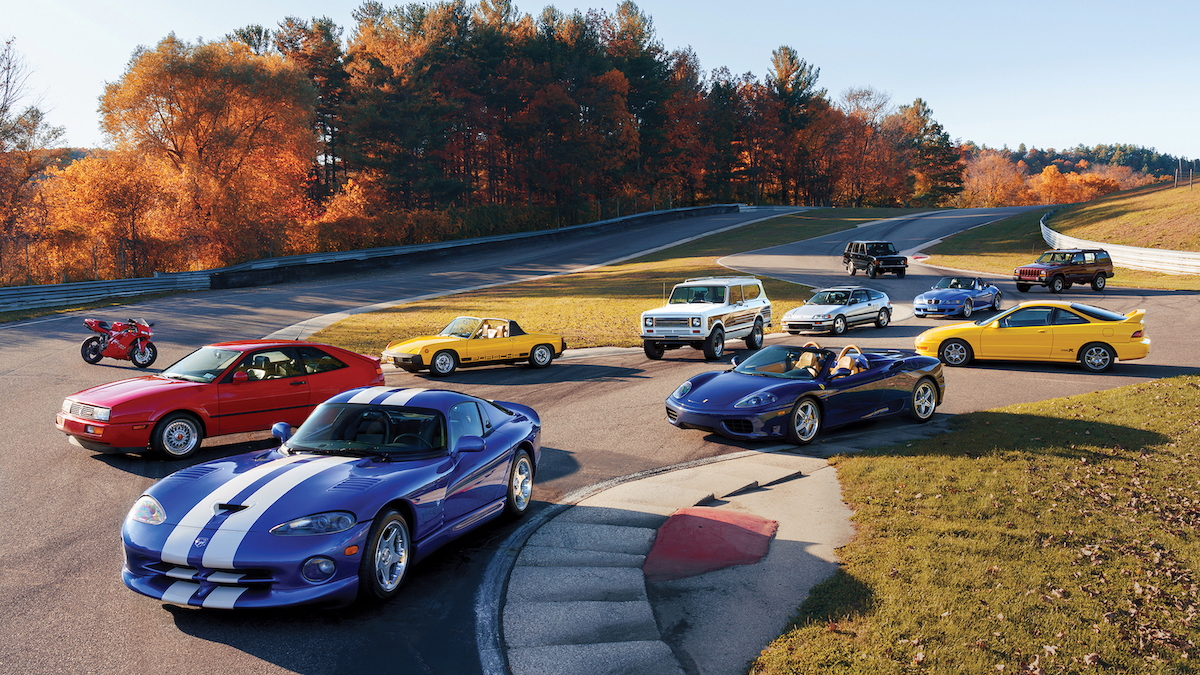 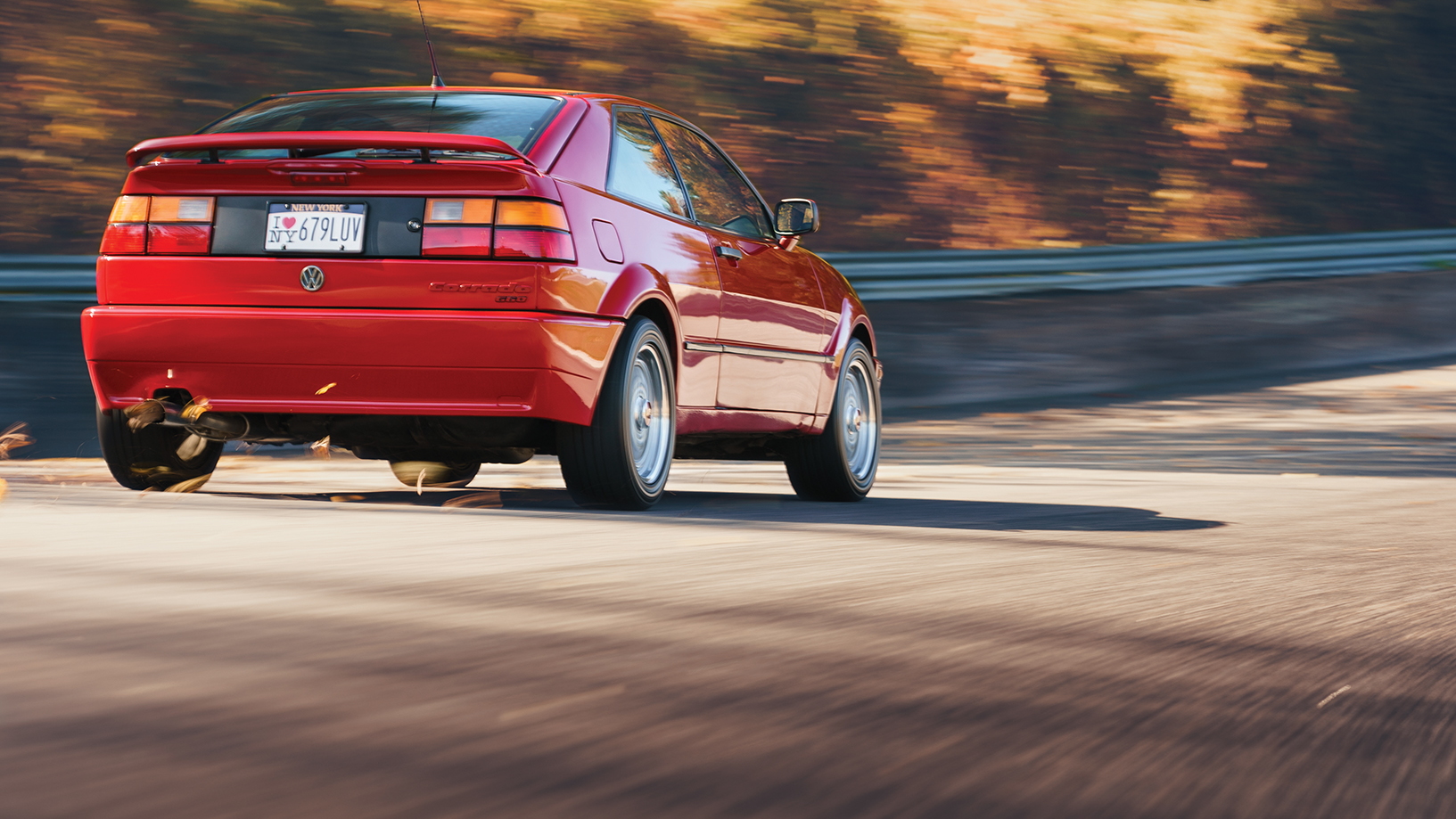 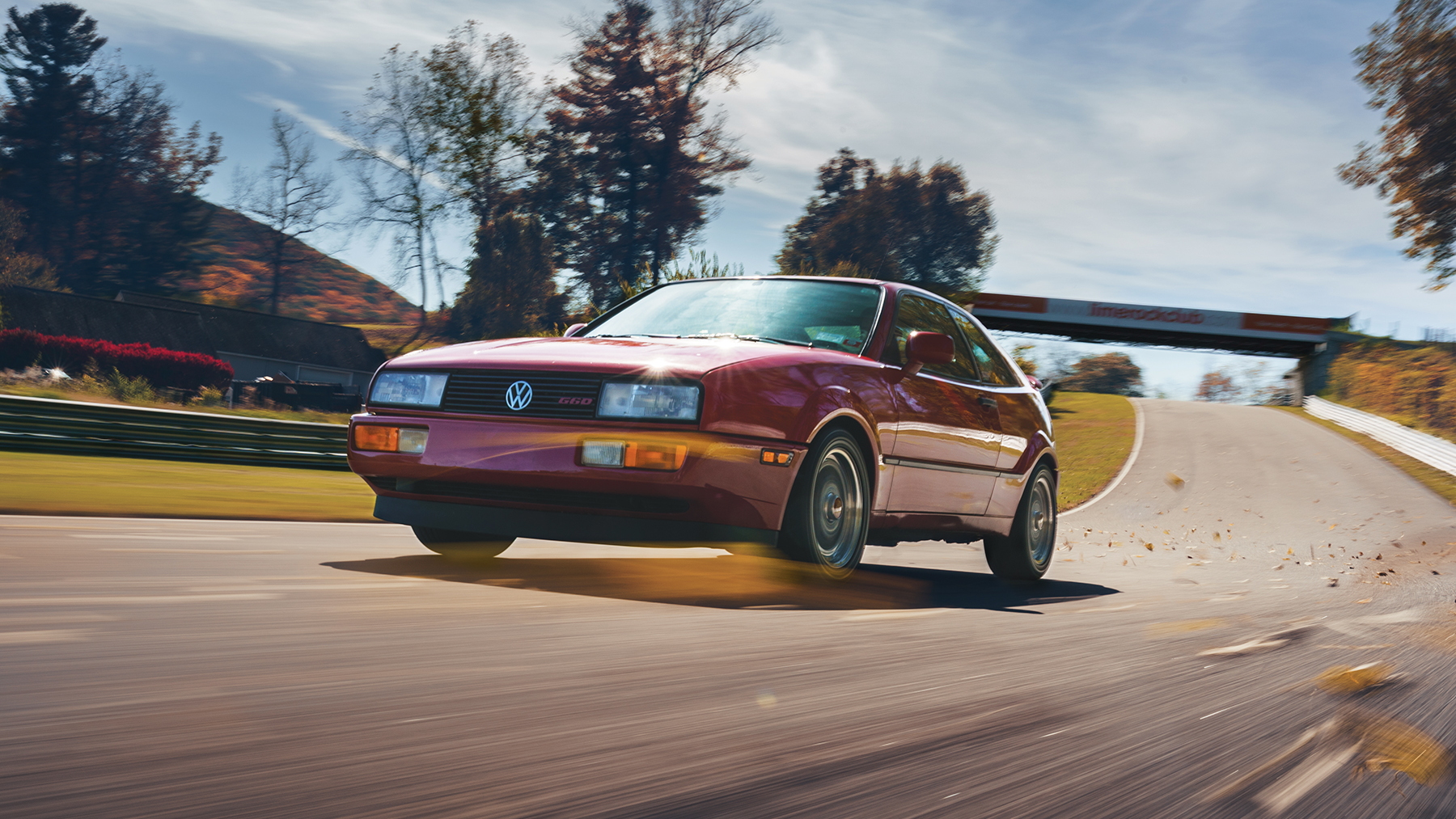 “The high school graduates of the late ’90s are now in their late thirties, and like every generation before them, they are investing in the cars of their youth,” said Larry Webster, Hagerty magazine's editor-in-chief. “The difference is they love imports, SUVs and cars that are more modern, affordable and fun to drive than conventional classics. It’s great to see them put their stamp on the hobby.”

The insurer compiled its list using data from the Hagerty Price Guide, Hagerty Valuation Tools, Hagerty auction results, and requests for insurance quotes. The following are the 11 vehicles Hagerty identified for its 2020 hot list.

Take a quick glimpse at the Integra Type R and you might think it’s any other Integra, an appealing but not overly quick coupe from the 1990s. Rev its screaming 195-horsepower 1.8-liter inline-4 all the way to 8,400 rpm and hear the VTEC cam switch over to its more-aggressive profile and you might fall in love. Then take it around a corner and you’ll want one. The Integra Type R is referred to by many as the best-handling front-drive car of all time (Honda’s newest Civic Type R might disagree). The Integra’s body and suspension were upgraded with a larger strut tower brace, body reinforcements, larger sway bars, and different spring and damper tuning, all of which was overseen by chief engineer Shigeru Uehara, who was also in charge of S2000 and NSX development. The Integra Type R only weighed 2,500 pounds too, thanks to a distinct lack of sound deadener, no cruise control, and optional air conditioning.

The Integra Type R is taking off as a collectible. Prices are up 21% in the last year, according to Hagerty, and a mint 1,161-mile car fetched $63,800 at auction. Hagerty quotes prices ranging from $40,700 to $51,200 for a 2000 model. With millennials accounting for half of the company’s insurance quotes, it’s sure to stay on an upward trajectory.

BMW responded to the success of the Mazda Miata with the Z3 roadster in 1995. It came with a pedestrian 4-cylinder engine. Then the M division got ahold of the Z3 and installed the 240-hp S52 3.0-liter inline-6. The M gang also pulled plenty of parts from the E36 3-Series at a time when the 3-Series was driving magic on wheels. The car got even better in 2001 when the 315-hp S54 engine gave it real performance. The styling may have seemed overly organic for the day, but it has aged well. We especially love the deep dished wheels. An appearance in the James Bond film “Goldeneye” gave it some mainstream popularity, but the rarer M Coupe is the car that has caught on with collectors.

Hagerty says the M Roadster is next to catch on with collectors. Its value is up 8.2% in the last year, but it still sells for about half the cost of an M Coupe. Hagerty quotes prices in the $21,000-$27,200 range for a 1999 model. Expect to pay more for the more-limited S54 cars.

The Dodge Viper was the brainchild of then-Chrysler President Bob Lutz, who wanted a sports car to bring buyers to dealers. It arrived in 1990 as a crude roadster. A coupe, called the GTS, arrived with the second generation in 1996. It still used the truck-based 8.0-liter V-10, and now horsepower was up from 400 to 450. The second-generation car became more civilized, with the addition of power windows and air conditioning, but it still provided a raw, visceral driving experience. The V-10’s torque teamed with a squirrelly rear end to spell doom for many cars, as drivers couldn’t control all that power.

Hagerty has never had a motorcycle on this list, until now. The Ducati 916 revolutionized motorcycle design when it arrived in 1994 by providing a glimpse of the machinery underneath, a trait that would go on to affect both car and industrial design trends. The design was so beautiful that it became part of Frank Gehry’s 1998 “Art of the Motorcycle” exhibit. The $14,495 bike was a stunning success. It sold like hotcakes and won Ducati four World Superbike championships. With a 109-hp 916 cc V-twin engine, the 916 was hot, loud, and uncomfortable, but also incredibly fun.

Ferrari’s mid-engine, V-8-powered cars may be less expensive than other cars from Maranello, but they are usually the sportiest. The Ferrari 360 had greatly improved dynamics over its 355 predecessor thanks to its new aluminum body, which was designed by Pininfarina. The 3.6-liter V-8 mounted midships didn’t hurt, either. With five valves per cylinder, it put out 400 hp and a modest 275 pound-feet of torque, and it revved to the dickens or 8,500 rpm, whichever came first. A Spider arrived in 2000, and more than 17,000 360s were built in the car’s six-year run.

Hagerty said the number of 360s it insures has risen 211% in the last three years, which tells the company that the 360 is gaining a collectible reputation. Hagerty quotes prices from $82,200 to $89,600 for a 2002 Spider, and cars with the gated 6-speed manual transmission are more valuable.

Honda introduced the first CRX in 1984 with a focus on fuel economy. The car weighed in at a featherweight 1900 pounds and that made it fun to drive as a bonus. Then Honda introduced the CRX Si for 1985 with a stronger 91-hp 1.5-liter inline-4 to take advantage of that fun-to-drive character. The second-generation arrived in 1988 with a more advanced four-corner unequal-length control-arm suspension, and the Si received a 105-hp 1.6-liter inline-4. Still only 2,100 pounds, the little two-seater delighted drivers with its go-kart-like handling. Tougher safety standards have made the thin roof pillars and light weight of the CRX Si a thing of the past, but you can still buy one for about what they cost new.

Chevy Blazers, Ford Broncos, and Toyota FJ40s have increased in value during what Hagerty calls an eight-year SUV boom. Why not the International Harvester Scout next? If you can find one that hasn’t rusted away, that is. International, known more for its commercial vehicles, was in trouble in 1980 and the Scout was its last remaining model. However, IH expanded the Scout lineup to include hardtop, soft-top, removable steel top, and truck body styles, and offered four engines, rear- or four-wheel drive, and a wide variety of options. Nonetheless, 90% of Scouts had a V-8 and four-wheel drive. It was basic inside and so compact that it had a tighter turning circle than a Jeep CJ-7.

Hagerty says the Scout is a cheaper way to buy a classic American sport ‘ute. Gen X is responsible for 56% of the insurance quotes for Hagerty, and that means its values are going to increase, the company says. A 1979 Scout II with V-8 power is worth between $25,500 and $32,500, and those values represent a 23.6% increase over 2018.

With its unibody design, the Jeep Cherokee can be called the forefather of the crossover SUVs that have become so ubiquitous. It was loved in its time, perhaps for its simple lines or its generous space on a compact footprint, and Jeep sold 2.5 million of them. They were family vehicles and daily drivers, so finding a low-mileage, unmolested one today is a challenge. The most common engine was Jeep’s 4.0-liter inline-6. It made only 190 hp but it was torquey and reliable. Compared to today’s crossovers, the Cherokee rode like a buckboard and suffered from numerous squeaks and rattles, but it offered advanced four-wheel-drive systems that could be selected on the fly and it served many families well.

Land Rover started the luxury SUV segment in 1970 with the Range Rover. It had solid axles, but a soft coil-spring suspension, power disc brakes all around, and standard full-time four-wheel drive. An aluminum 4.0-liter V-8 with Buick roots powered the beast, and it made 181 hp by 1995. A four-door body style was added in 1981, and it was the only body style offered in the U.S. when “Bigfoot in a tux” arrived in 1987 with a $31,000 starting price. The truck’s classic lines still look good today, and it’s comfortable to drive, though the V-8 doesn’t have the oomph needed to tote 4,600 pounds.

Hagerty says the original Range Rovers are affordable today because they are known to be unreliable. The company quotes prices for a 1995 model between $20,500 and $30,300. It’s up only 1.8% since 2018, but both Gen Xers and Millennials are taking an interest, so there’s plenty of room for growth.

Show us a vintage Porsche that hasn’t appreciated in value and we’ll show you a 996-generation 911. The mid-engine 914 was the result of a partnership between VW and Porsche and it wasn’t originally clear under what brand it would be sold. Porsche eventually won out and Porsche enthusiasts have shunned the car for years due to its VW association. After all, the first cars came with an air-cooled 85-hp 1.7-liter VW flat-4. That reputation is changing and Porsche fans now accept the car. The 914/6 was more powerful, with its 125-hp 2.0-liter flat-6, but it cost almost as much as a 911 and it died after 1971 with just 3,332 built.

The VW GTI and Golf Type R are revered for their fun-to-drive character, value, and hot hatch street cred. They look fine, but in the 1990s VW offered a hot hatch that looked even better than it performed. It was called the Corrado and it’s just now starting to catch on with collectors. The Corrado had its own version of the Golf and GTI platform, and it was actually built by Karmann. It launched with a supercharged 1.8-liter inline-4 that made 158 hp. Added for 1992 was the 178-hp 2.8-liter VR6 that was quite compact due to its 15-degree cylinder spread. The VR6 proved much more reliable than the supercharged inline-4, but it was also coarse. The highest-priced car in the VW lineup ended production after about 100,000 were sold in the U.S.