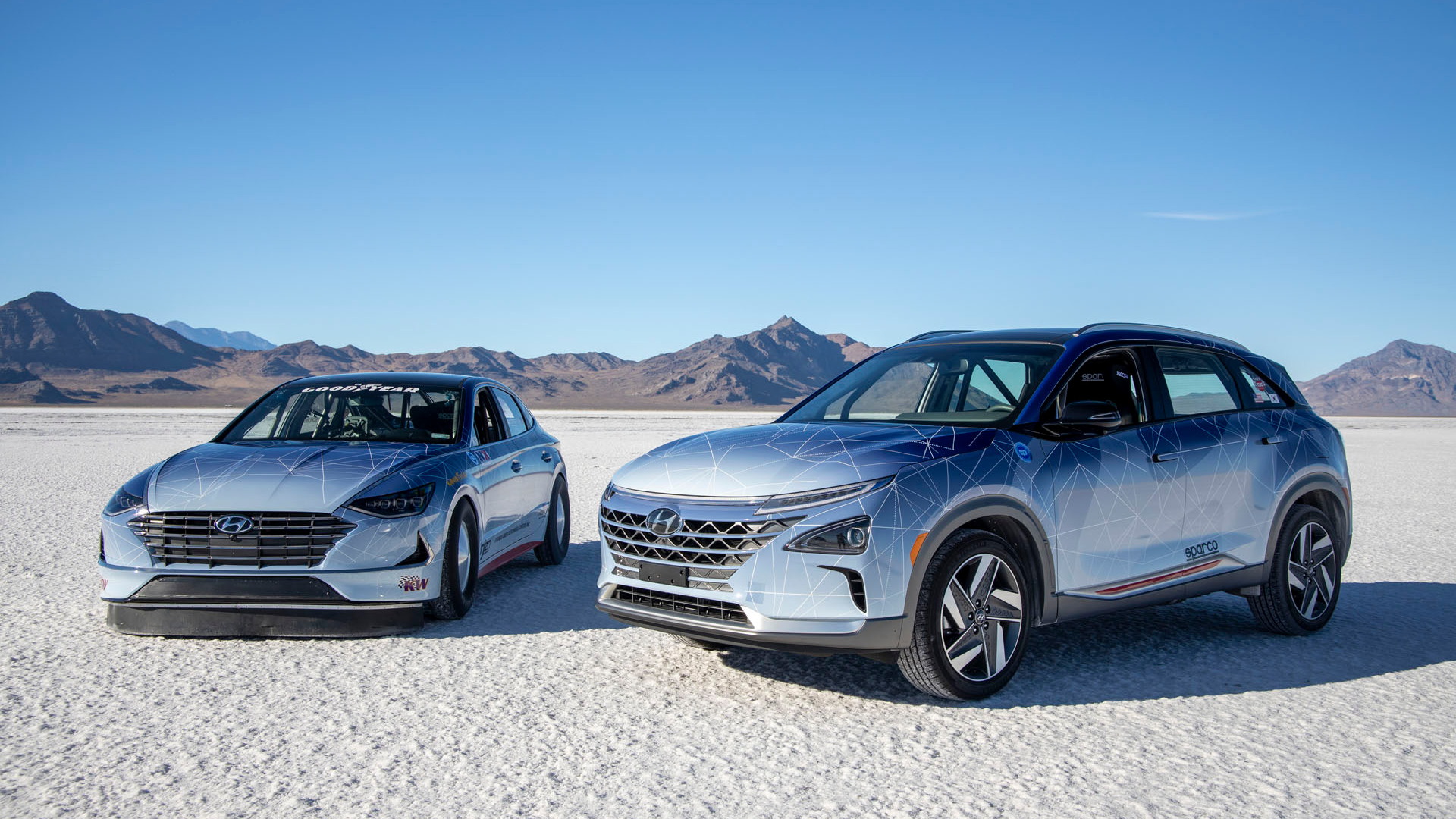 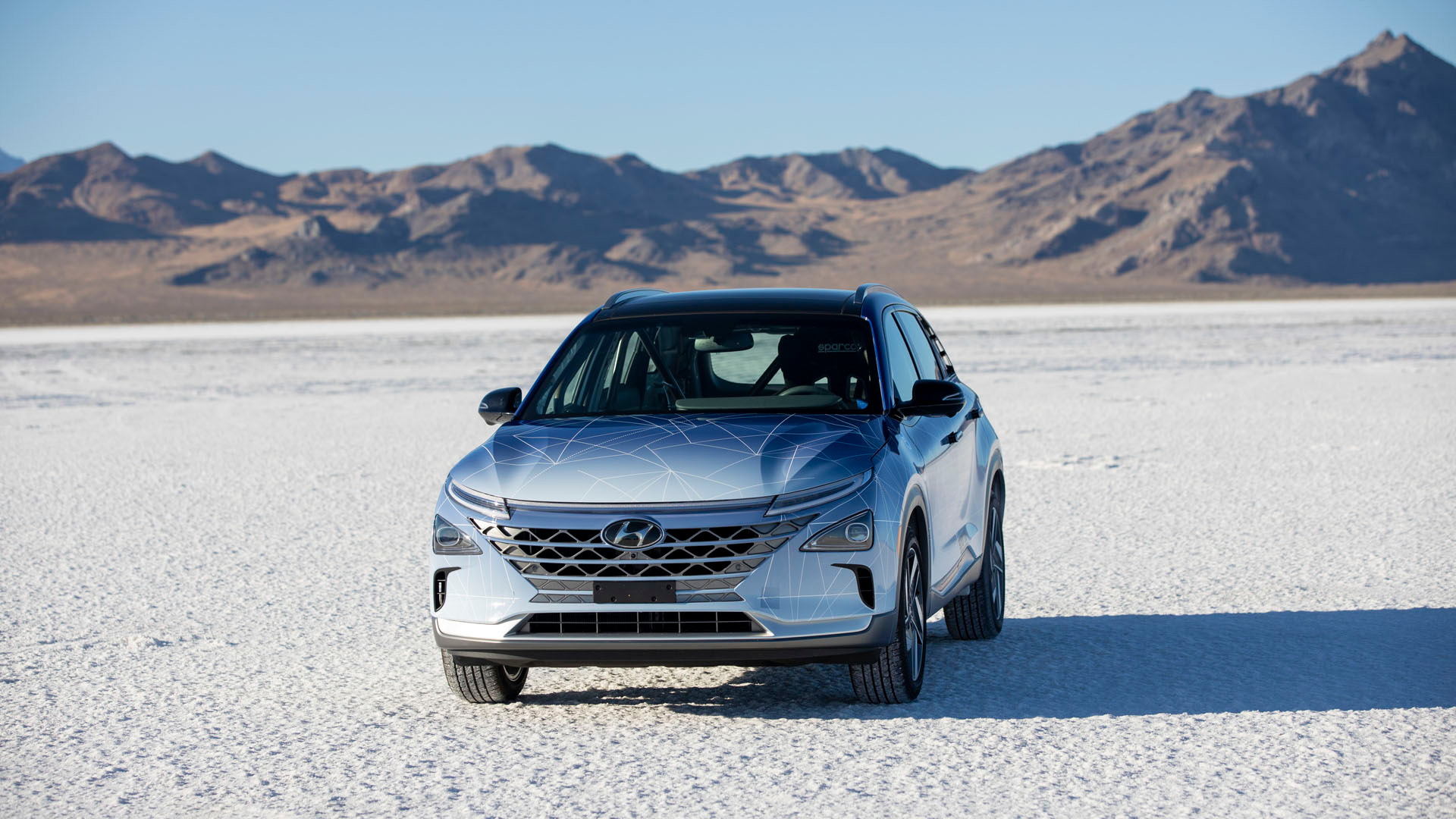 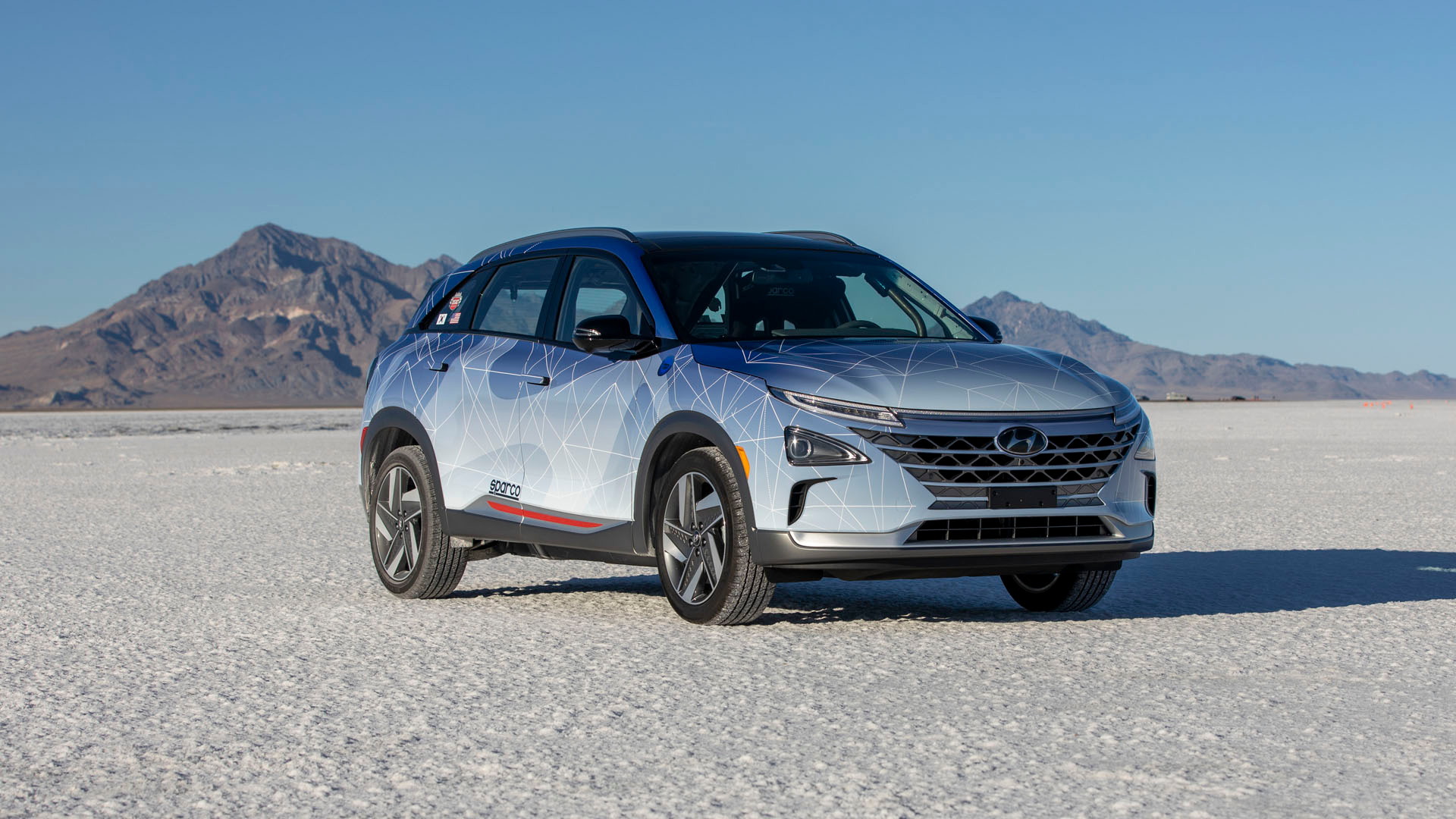 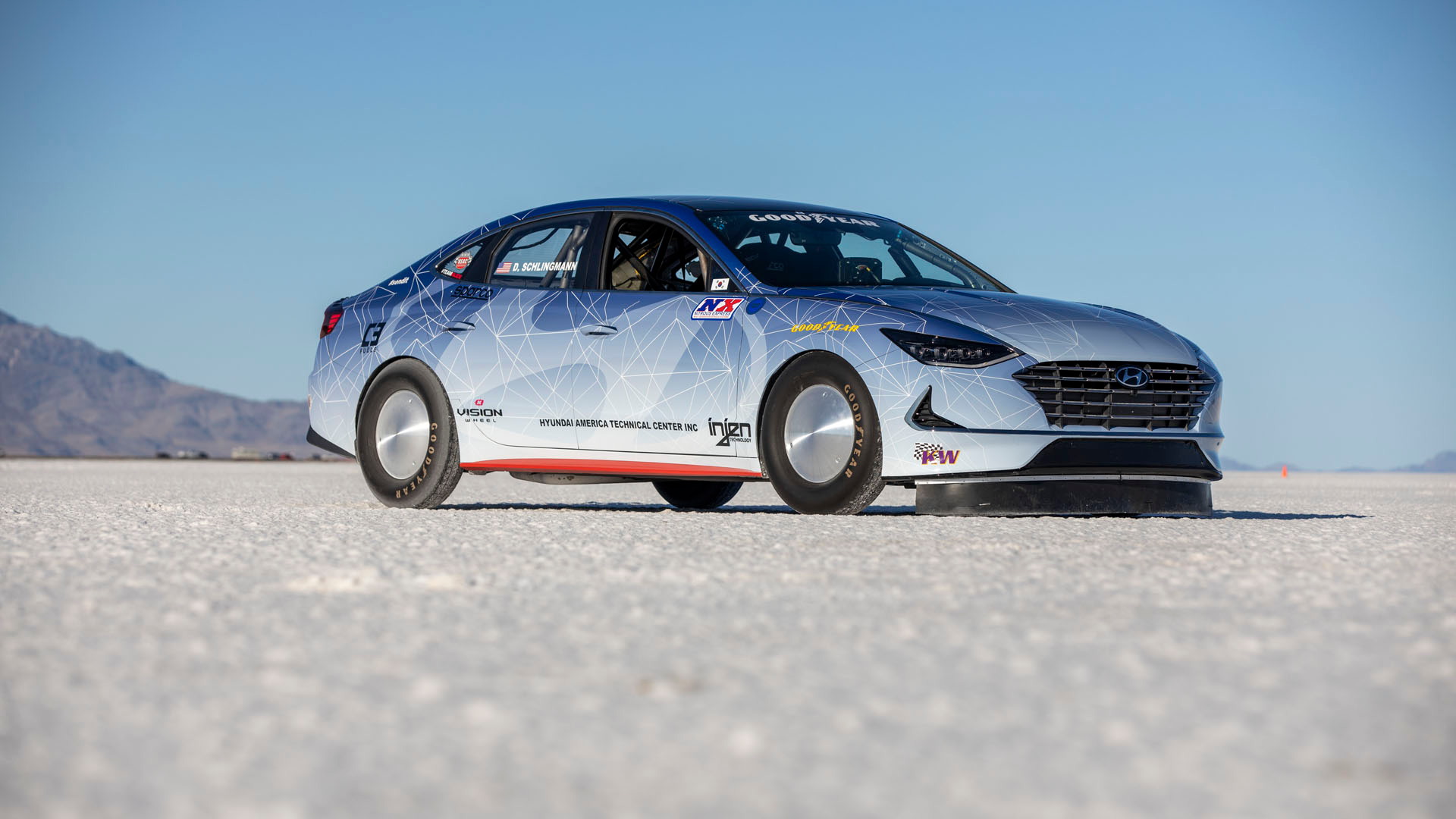 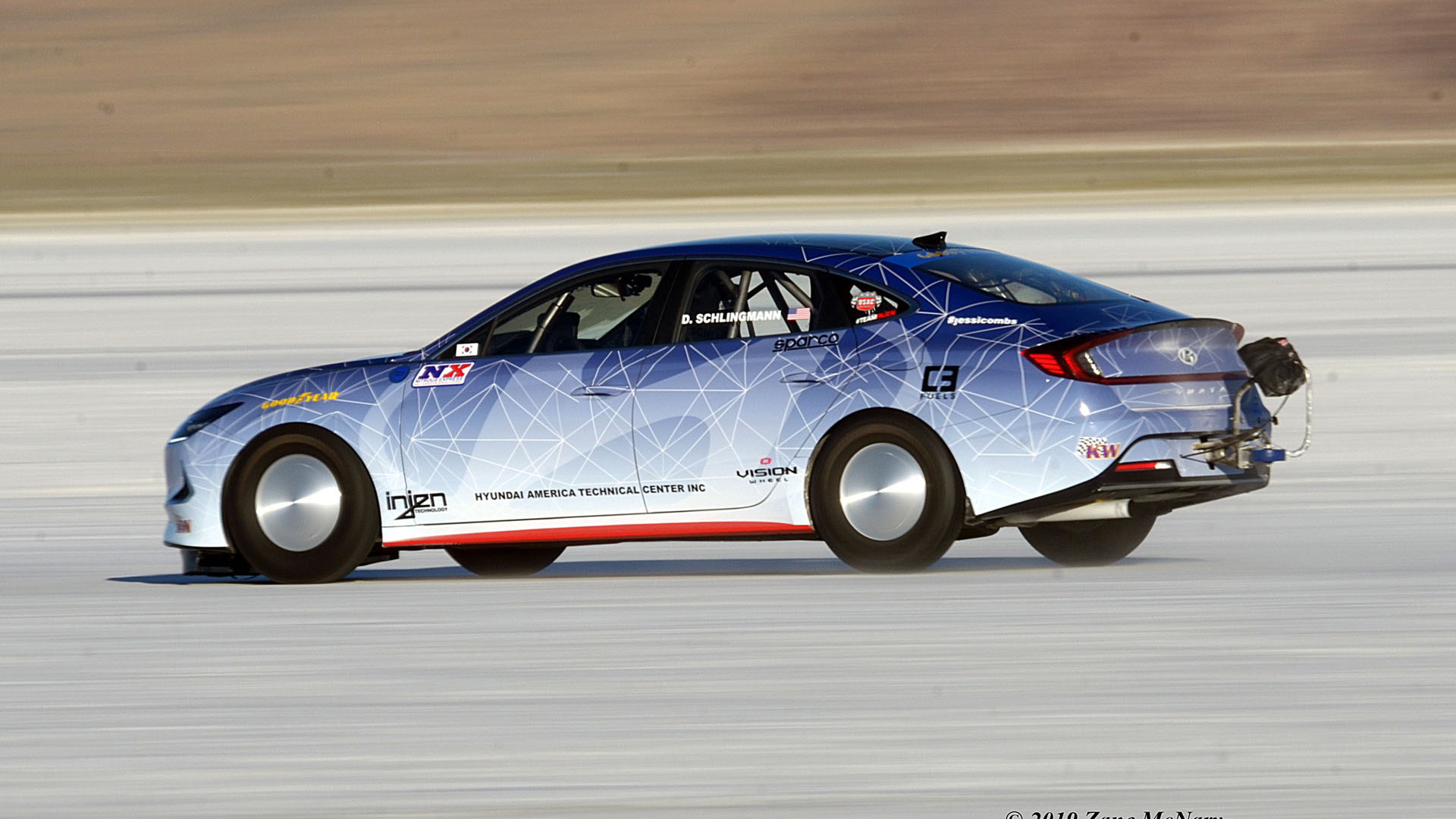 Hyundai's engineering teams from Korea and America took to the Bonneville Salt Flats in September to attempt land speed records with two of its green-tech models.

The company's engineering teams fielded a Hyundai Nexo aimed at tackling the record in the fuel-cell-vehicle category, and a Sonata in the gasoline-electric-hybrid category. Senior powertrain engineer Dean Schlingmann piloted the Nexo to 106.160 mph and the Sonata Hybrid to 164.669 mph. Both speeds are subject to FIA homologation and certification.

"I was thrilled with the privilege of piloting these two Hyundai land speed record attempts. The engineering teams from our U.S. technical center, Hyundai Motor America and Korea pooled talents and resources to create these eco-focused vehicles for our exciting achievements at the Bonneville Salt Flats," Schlingmann said.

The Nexo and Sonata Hybrid were decked out in safety gear and dressed up in their slickest exteriors to cut through the air as efficiently as possible. Both sported FIA-approved safety cages, race seats with 6-point safety harnesses, fire suppression systems, window nets, and arm restraints.

Aside from the safety gear, the 161-horsepower Nexo only received a custom wrap from Hyundai's Irvine-based design center and an under-bumper valence for improved airflow.

Hyundai is no stranger to mass-production land-speed records in alternative powertrain categories. In 2015, it set a then-record of just over 94 mph with its compact Tucson Fuel Cell SUV.

The record-attempt vehicles will be on display at the SEMA show in Las Vegas this November.