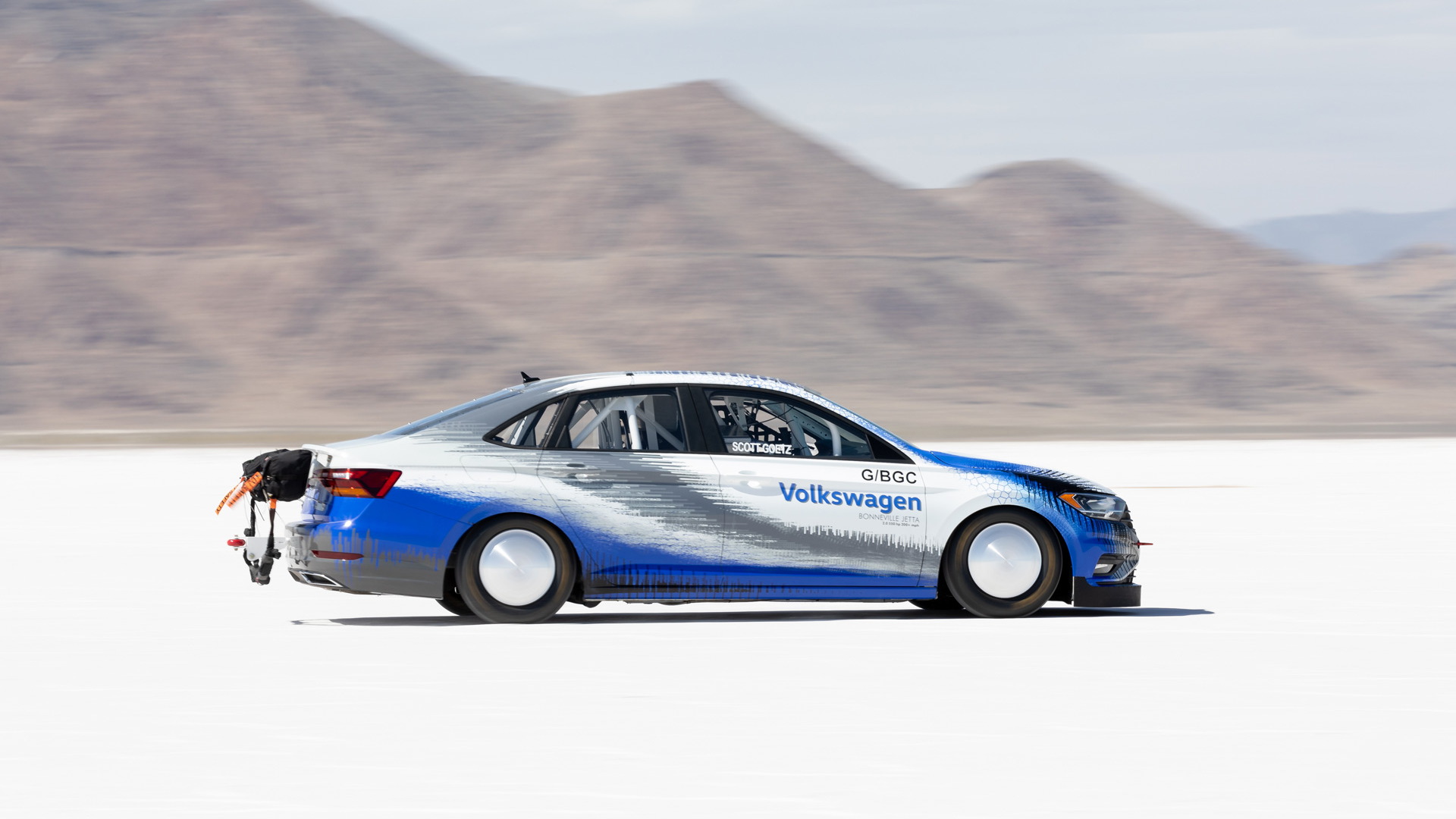 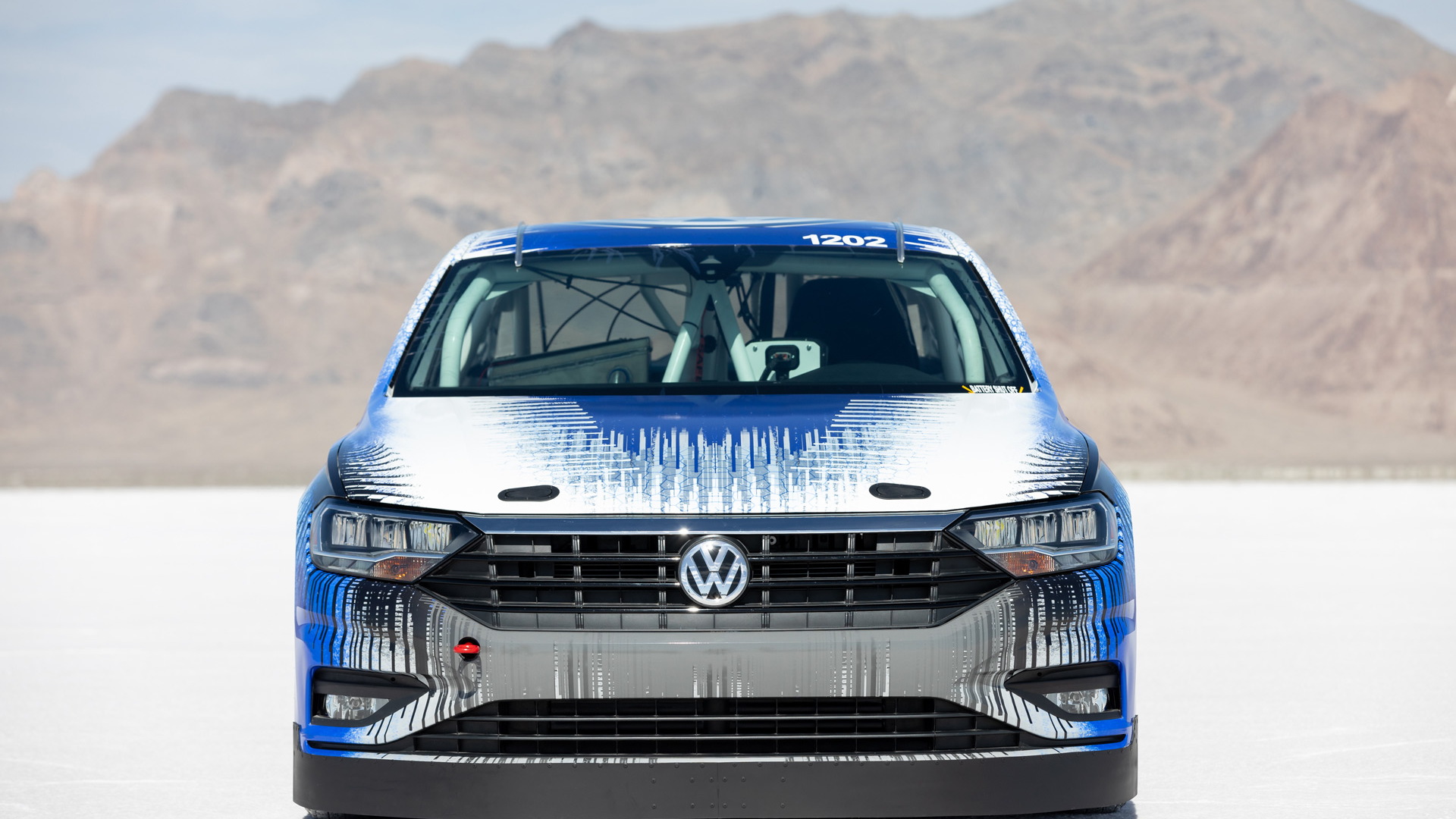 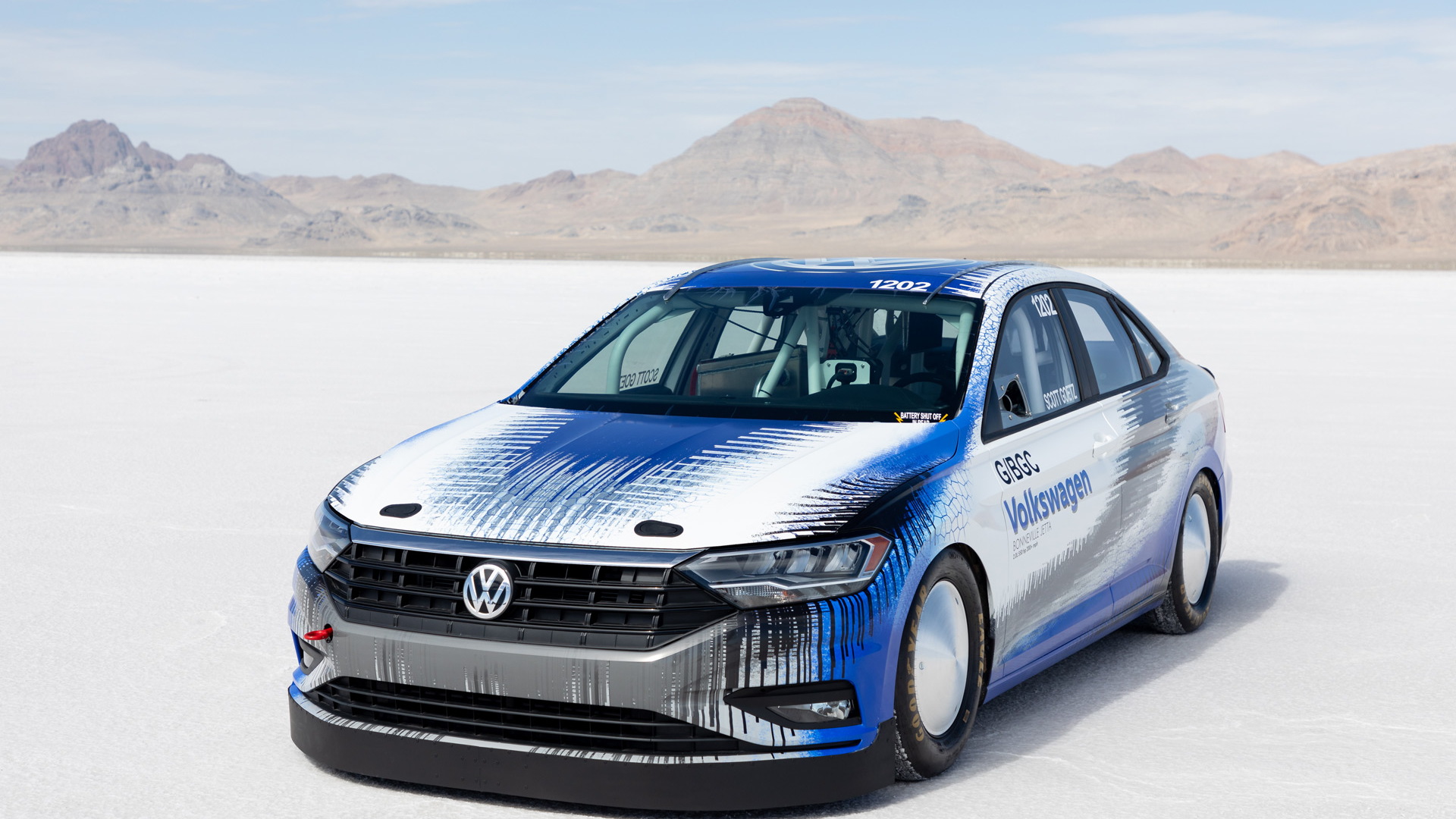 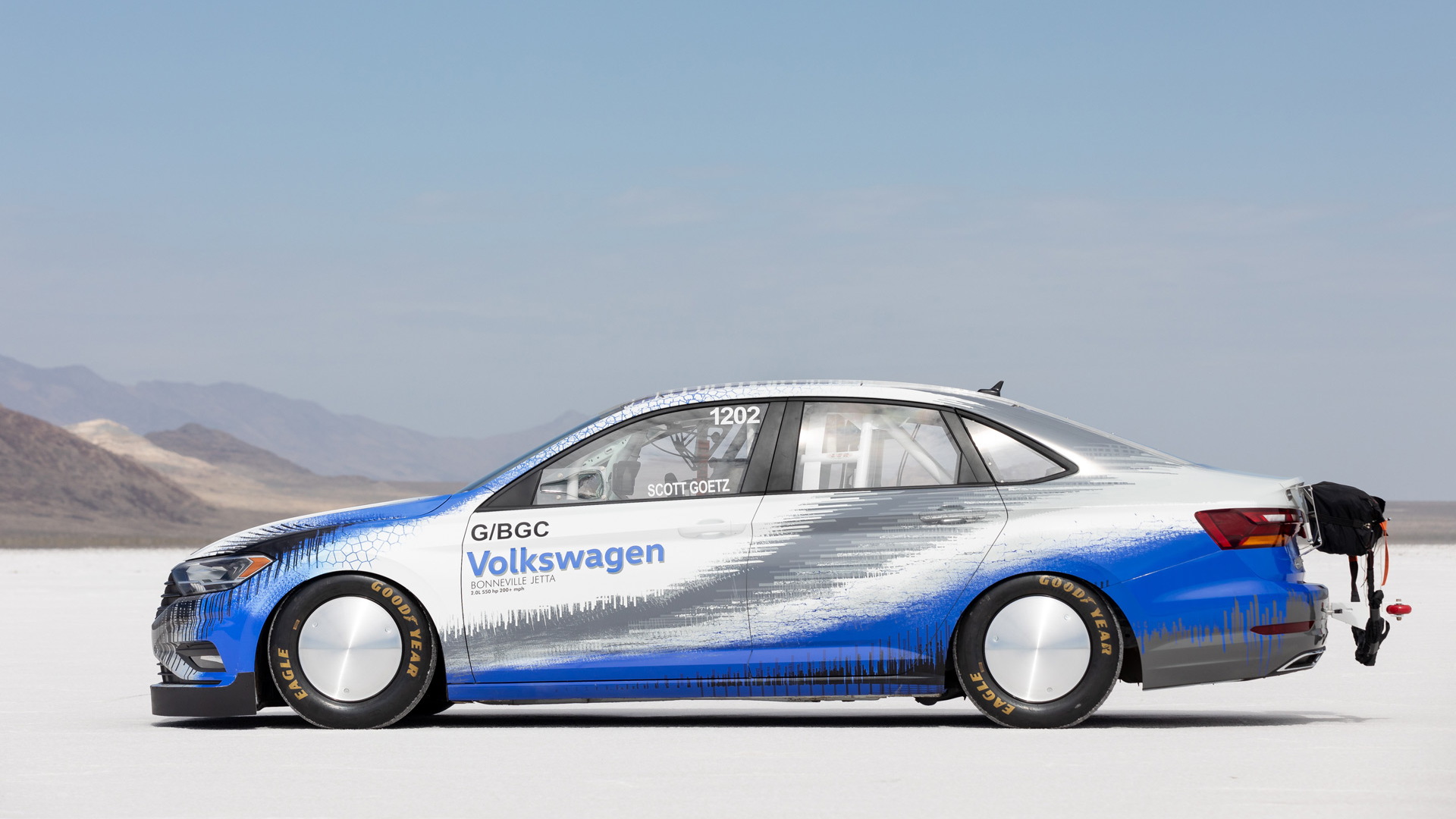 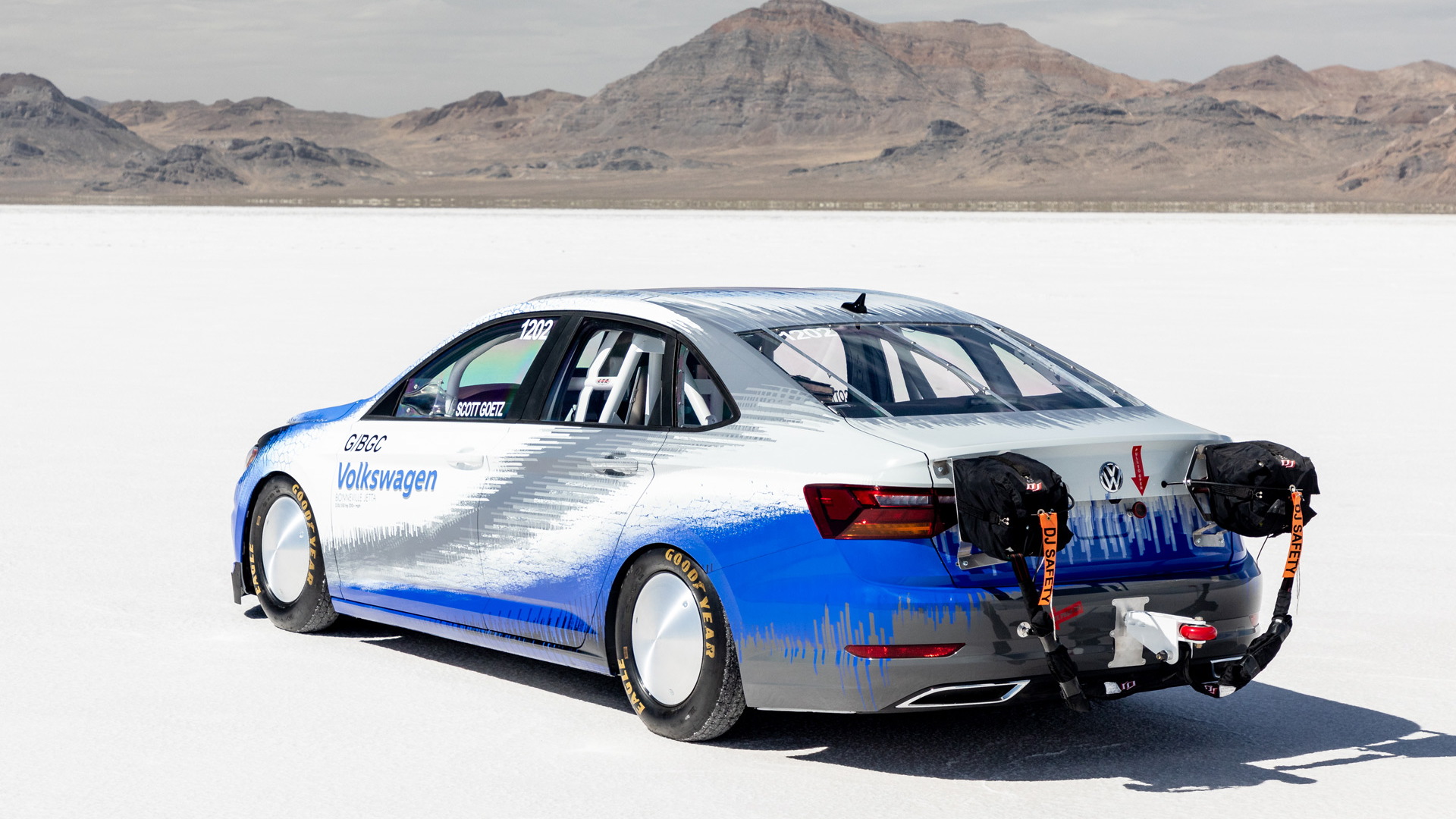 A specially prepared 2019 Volkswagen Jetta has just set a speed record at the Bonneville Salt Flats in Utah.

During the most recent round of the Utah Salt Flats Racing Association’s World of Speed event, held September 10-13, the modified Jetta hit a top speed of 210.16 mph.

That's a new record for the Southern California Timing Association’s (SCTA) G/BGC class, whose previous record stood at 208.47 mph. Doing the driving was veteran Salt Flats racer Scott Goetz. After the run, he said he was confident the car could go faster with some extra boost from the turbo.

The car was built by Bonneville preparation specialists THR Manufacturing and has been enhanced in almost every way possible.

As the photos reveal, the cabin's been completely stripped of all but the bare essentials, and the 2.0-liter turbocharged inline-4 under the hood has been dialed up to produce 600 horsepower. This was achieved via a bigger turbo, a high-flow exhaust system, and beefed up internals. The basic block and crankshaft are stock, though.

Numerous aerodynamic mods were also made to get the Jetta's drag coefficient down to a low 0.27. The suspension was also lowered and the car fitted with a limited-slip differential and special wheels and tires to aid traction. Finally, a pair of parachutes were added to help bring the car back to a stop.

The Jetta has been redesigned for 2019 though the latest model doesn't offer a 2.0-liter turbo just yet. The engine will be offered soon though in a sporty Jetta GLI, something reinforced by Volkswagen Group of America boss Hinrich J. Woebcken said.

“This record underlines the sporty credentials of our all-new Jetta and also gives a hint at the future of the GLI model, since this car uses a modified version of the GLI’s powerful EA888 2.0-liter TSI engine,” he said.

Look for the new Jetta GLI to debut early next year as a 2020 model.