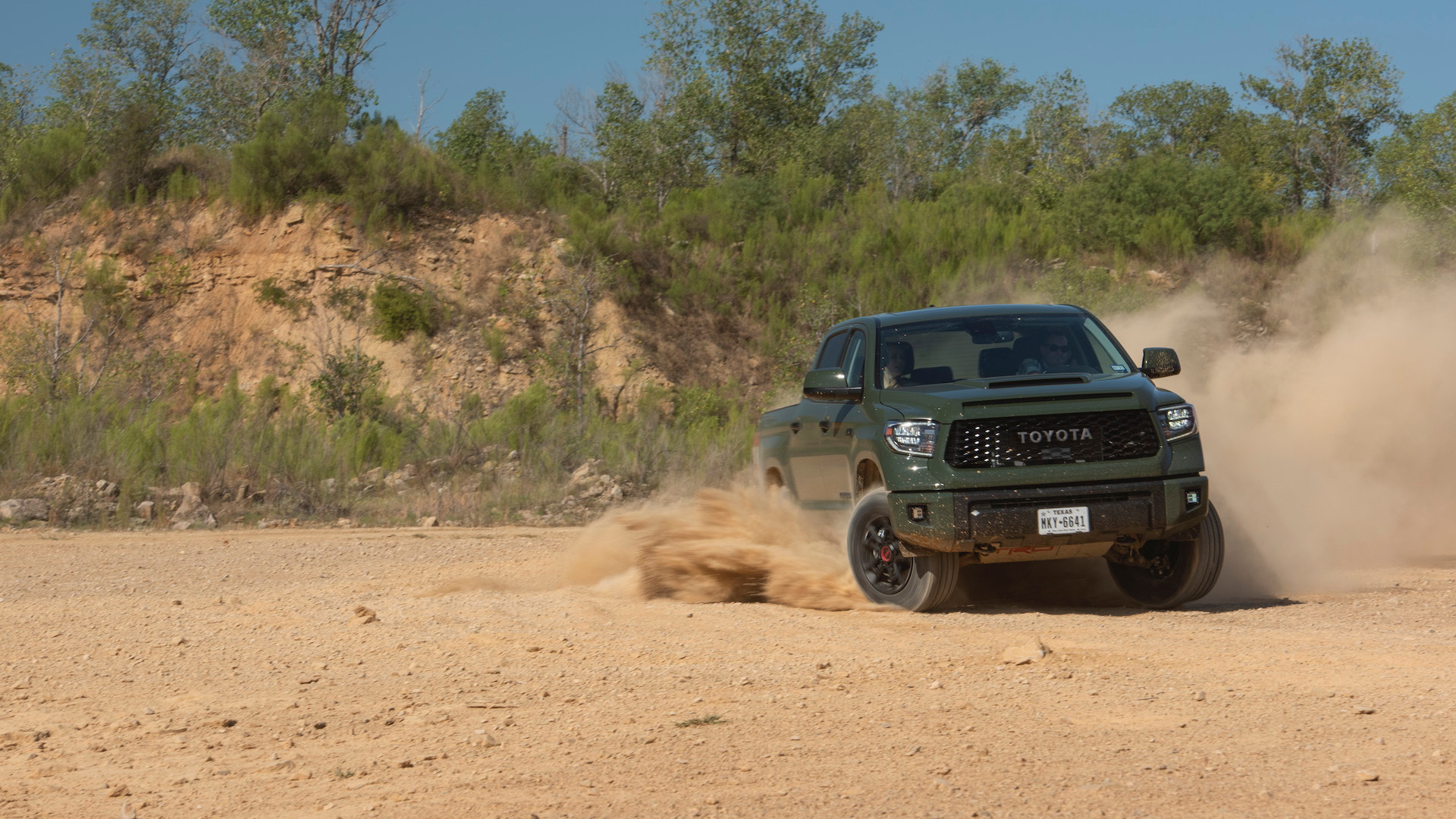 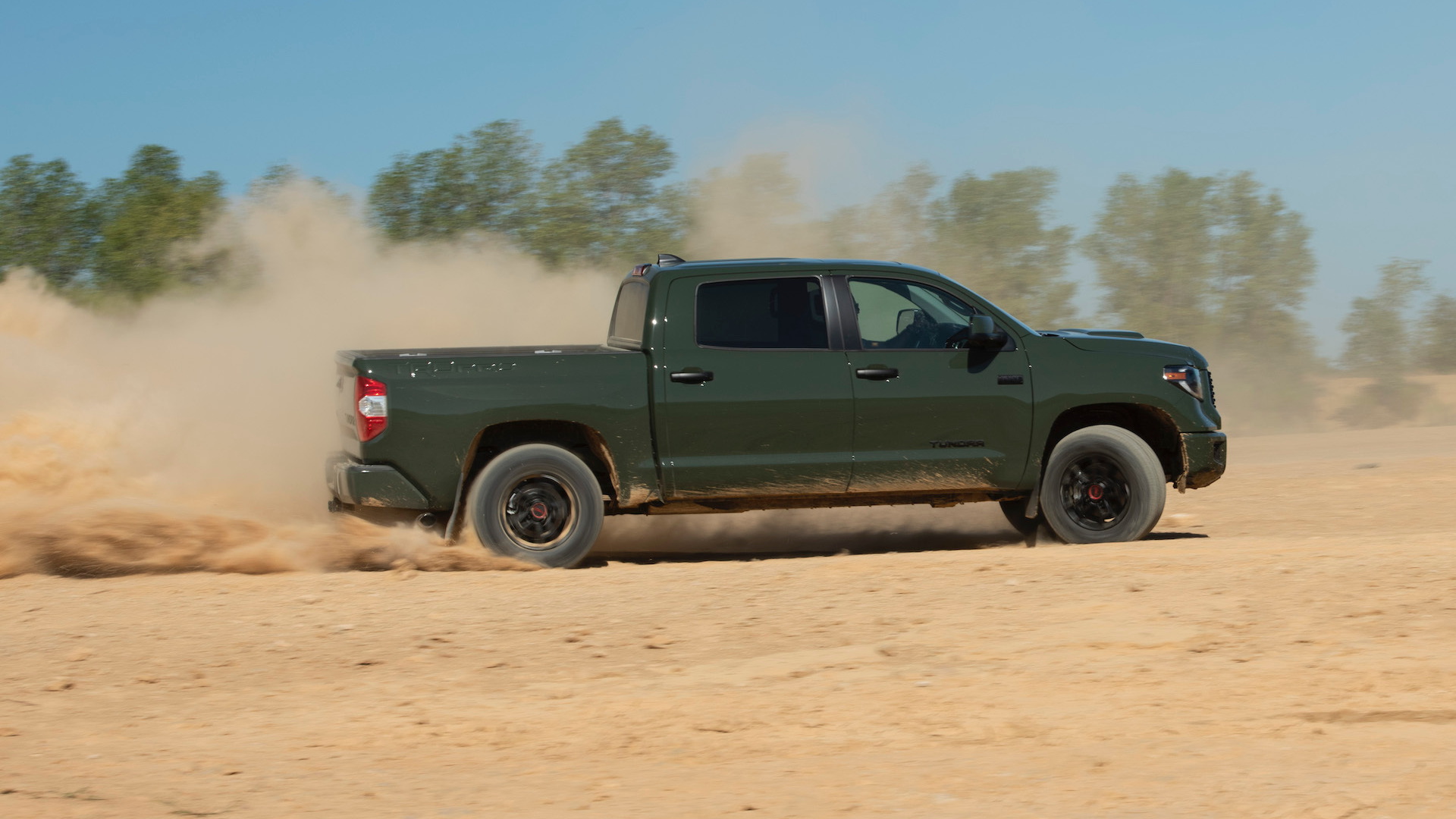 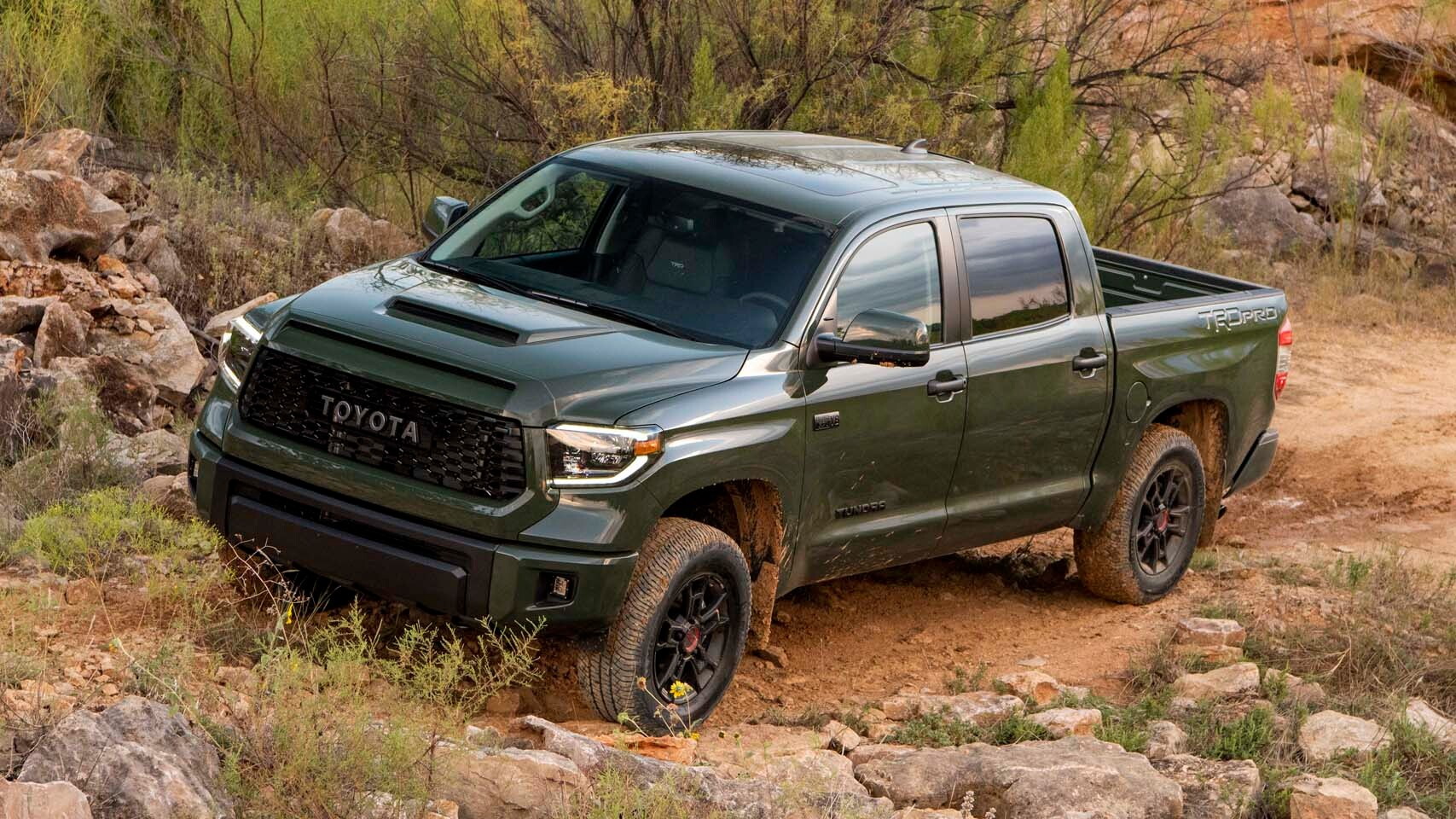 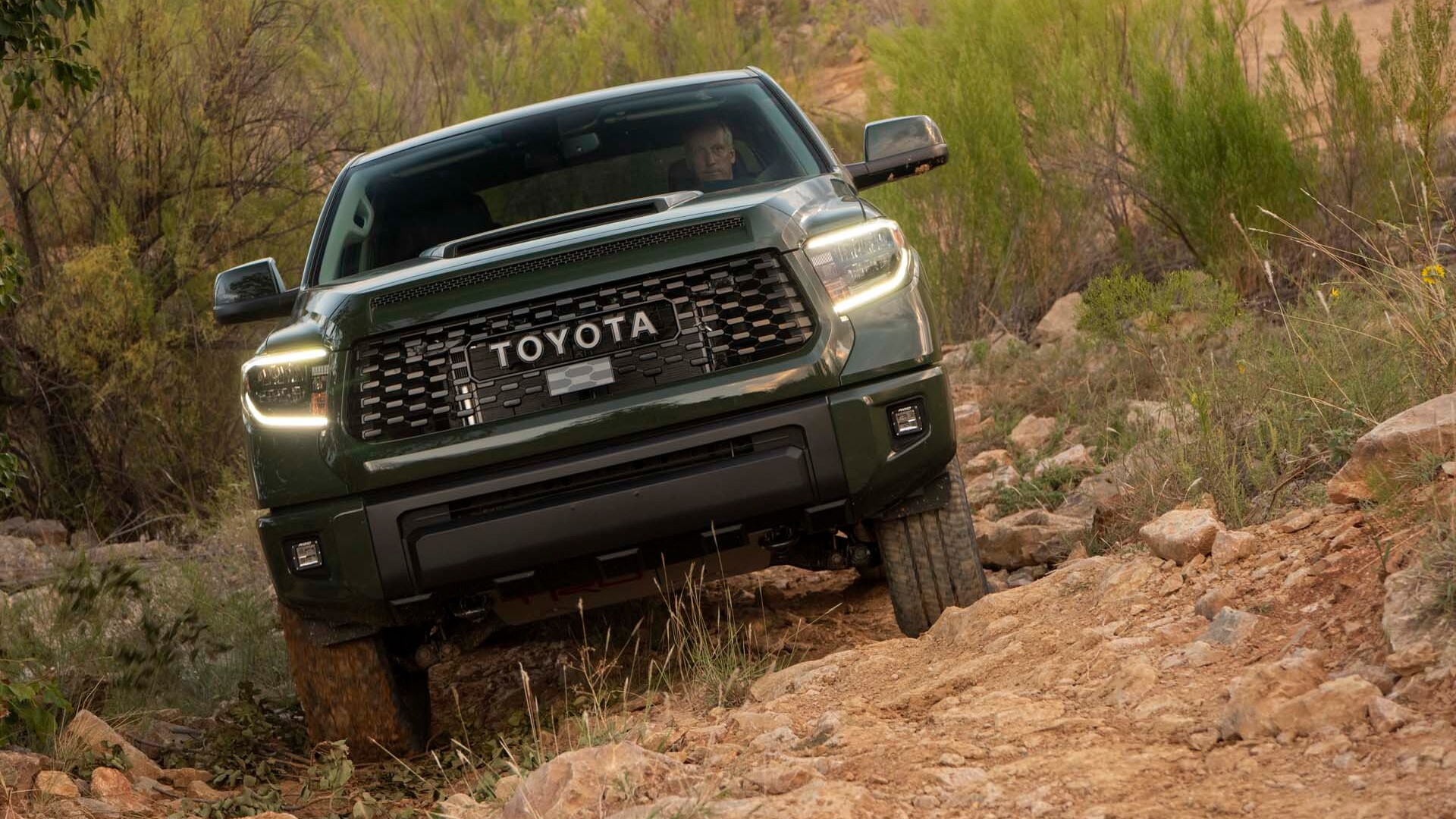 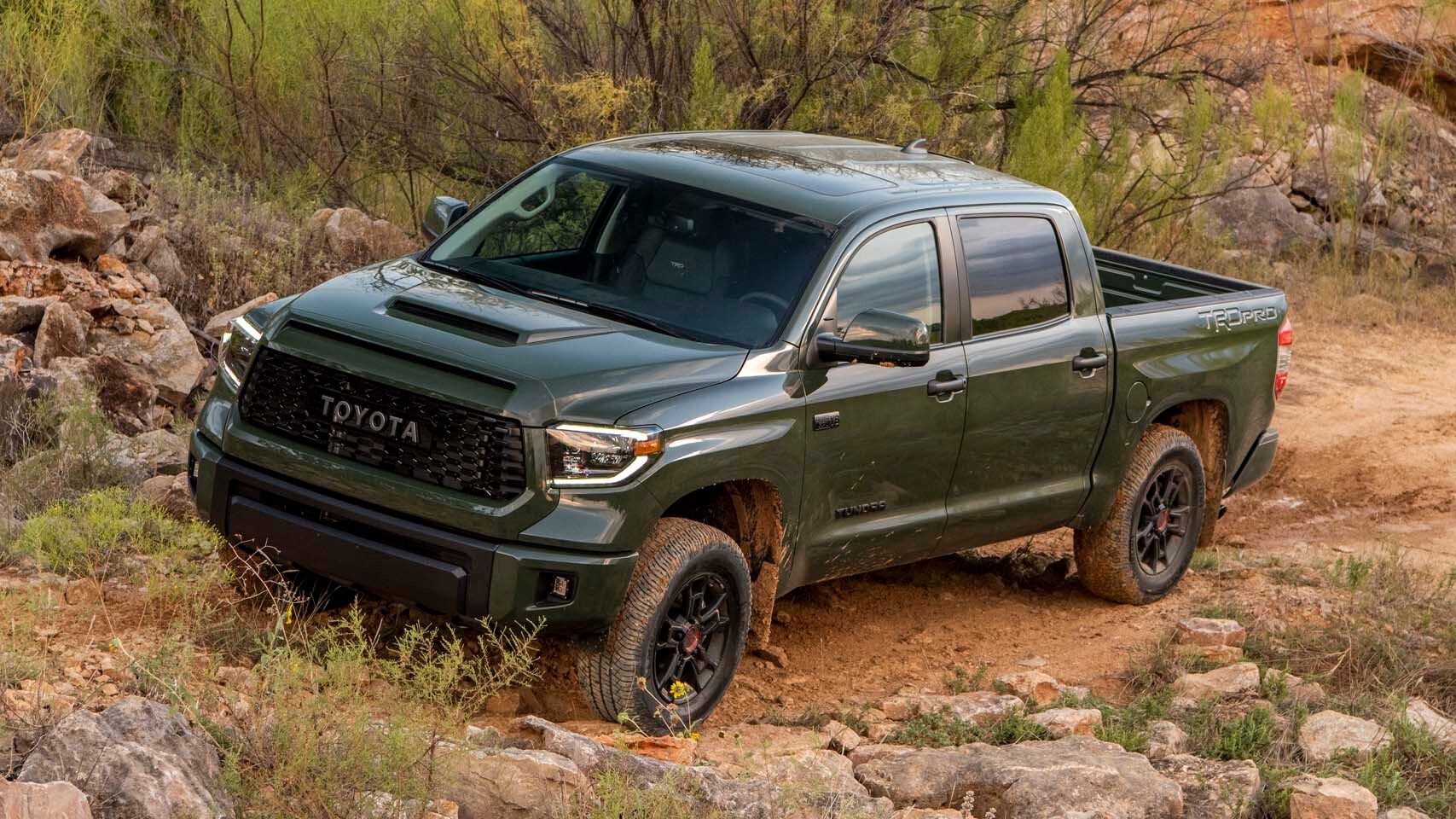 It had only been an hour since I arrived at the off-road Northwest OHV Park just outside of Dallas and I had already gotten “the look.”

I got out of the mud-covered Army Green 2020 Toyota Tundra TRD Pro and immediately blurted: “I didn’t break the truck, I swear.”

Given the off-road courses, the amount of rope given to hang ourselves, and the vehicles, I was confident that by the end of the day something would break, blow, snap, or bend.

Wrong. After pushing the entire 2020 Toyota TRD Pro lineup to my edge, it was clear Toyota’s pieced together upgraded bits that can take a beating and make the TRD Pro lineup special for enthusiasts.

I didn’t make it through the first turn on the high-speed course before the truck’s safety systems cut power. Every warning light on the 2020 Toyota Tundra TRD Pro’s gauge cluster flashed at me to say, “Stop that, you’ll hurt yourself.” Leave me alone, truck.

After the first lap, I disabled the truck’s electronic nannies to see if the truck’s Fox internal bypass shocks could really take a beating from the rutted, hard-packed Texas dirt at full throttle.

There are no paddle shifters, and the Tundra’s old 5.7-liter V-8 can be caught flat-footed if it’s in the upper gears. It takes work to keep the engine on boil.

It was somewhere between 40 and 50 mph across the sand, rock, and the rutted ground I felt the rear end lose touch with earth for a second. When the rear wheels touched down again, the truck continued with its forward momentum. It was stable, despite violently shaking my kidneys. Somehow the tires didn’t blow out while hitting rocks larger than my fist. I was shocked.

The Tacoma TRD Pro’s nimbler than the Tundra thanks to its small size, but it’s no less violent off-road at high speeds. The Sequoia TRD Pro is the surprise with its Tundra underpinnings and rear coil spring setup instead of leaf springs, and it’s notably more controlled at speed off road.

But it’s the 4Runner TRD Pro that is the quickest, most stable, and most fun thanks to its smaller size, coil rear springs, and terrific visibility.

Toyota’s given drivers the electronic tools to make off-roading easier for beginners. With crawl control and hill descent control, the TRD Pros can be set on their off-road cruise control with drivers only left to worry about wheel placement up or down the trail.

But the systems are crude. There’s a lot of noise from the underside of the trucks as the electronics manage the brakes and wheel spin.

While the Tacoma can be equipped with a desert intake, the 4Runner and Sequoia feature Yakima roof racks and the Tundra features a TRD Pro-specific hood. My favorite is that all of the TRD Pro models sport a mesh grille with throwback TOYOTA lettering, which required special approval from executives for the TRD Pro models.

Let the record reflect I beat the snot out of each of the TRD Pros and broke nothing.

Toyota paid for travel and lodging for Internet Brands Automotive to bring you this first-hand report.