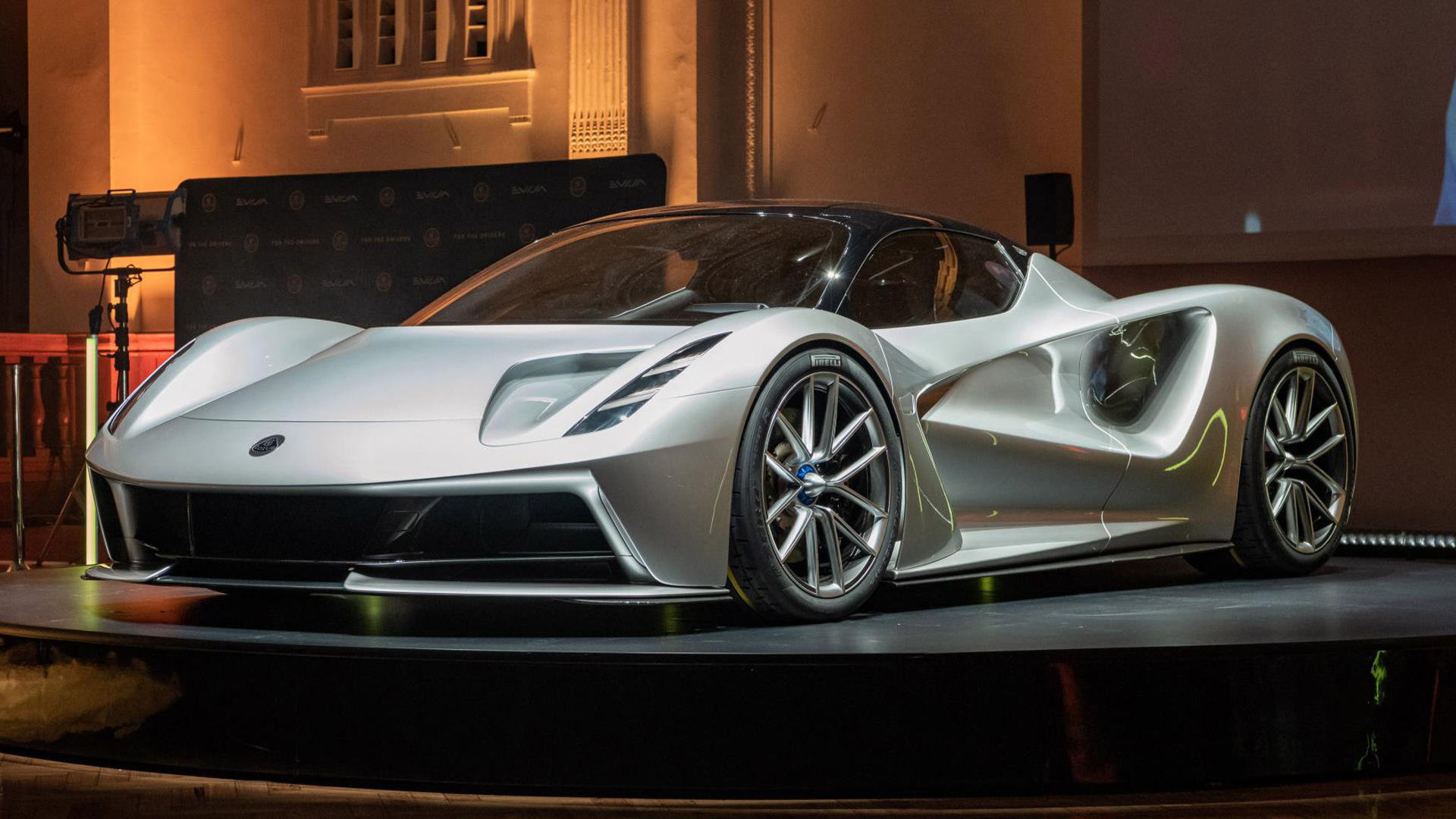 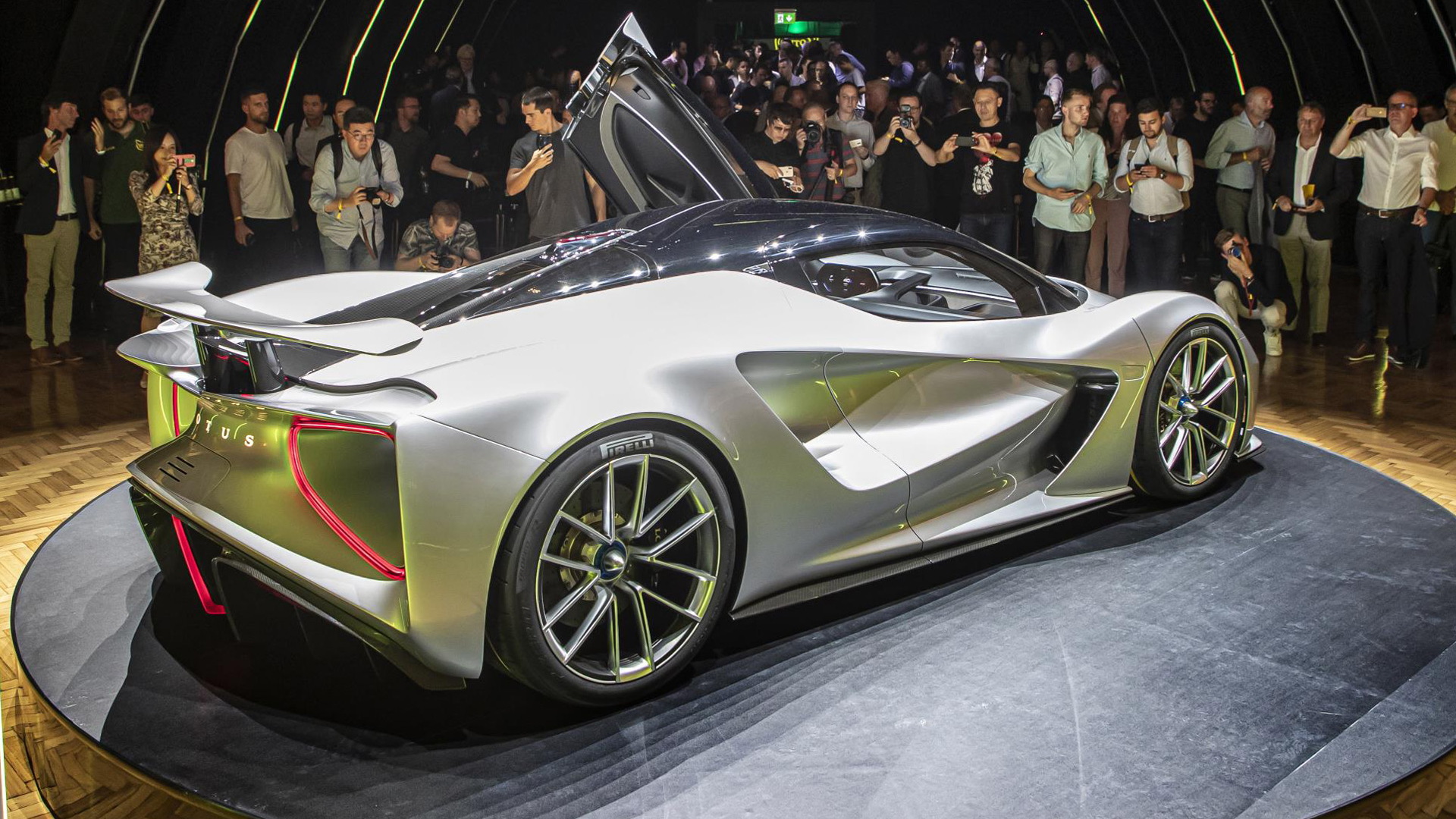 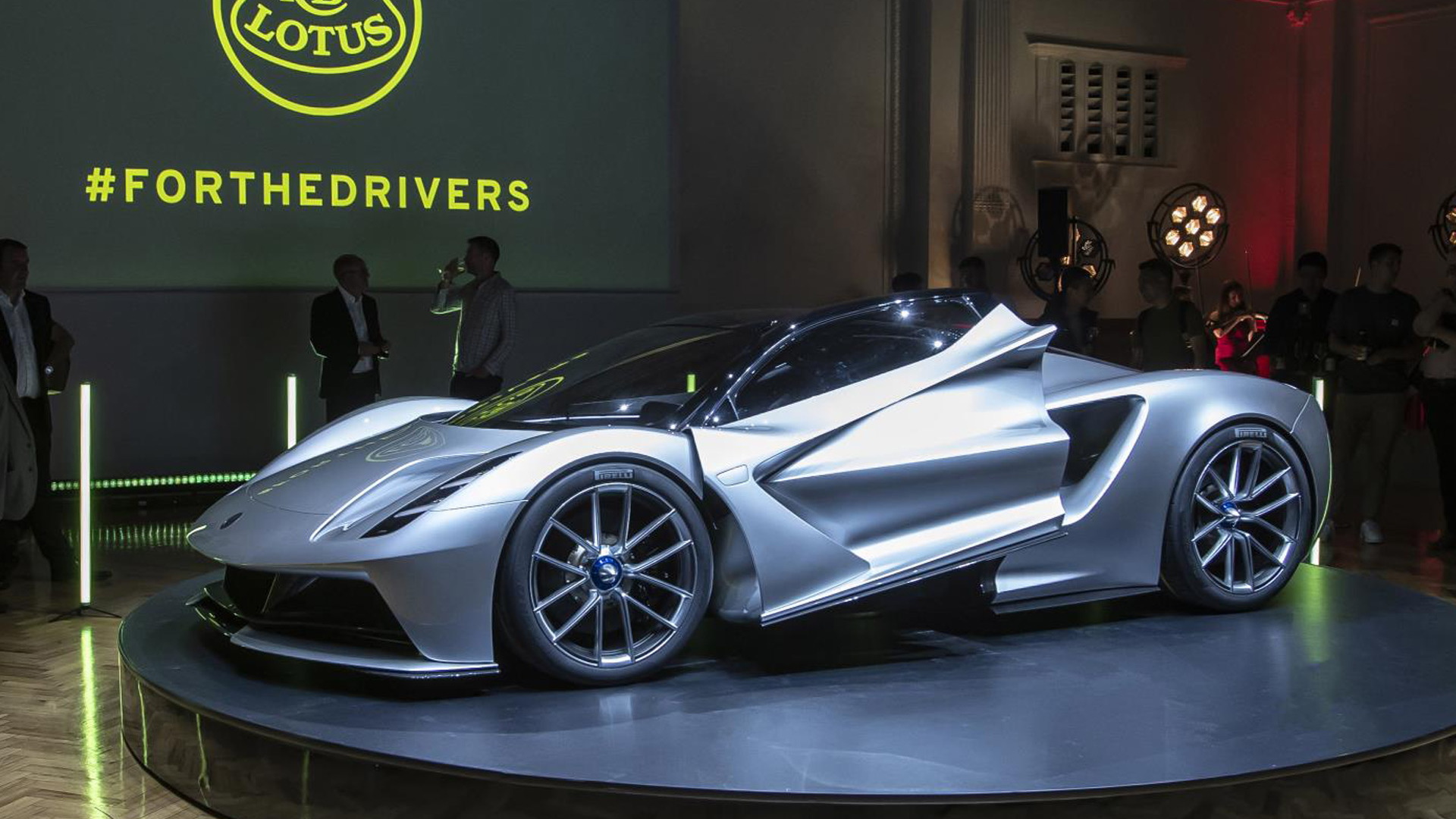 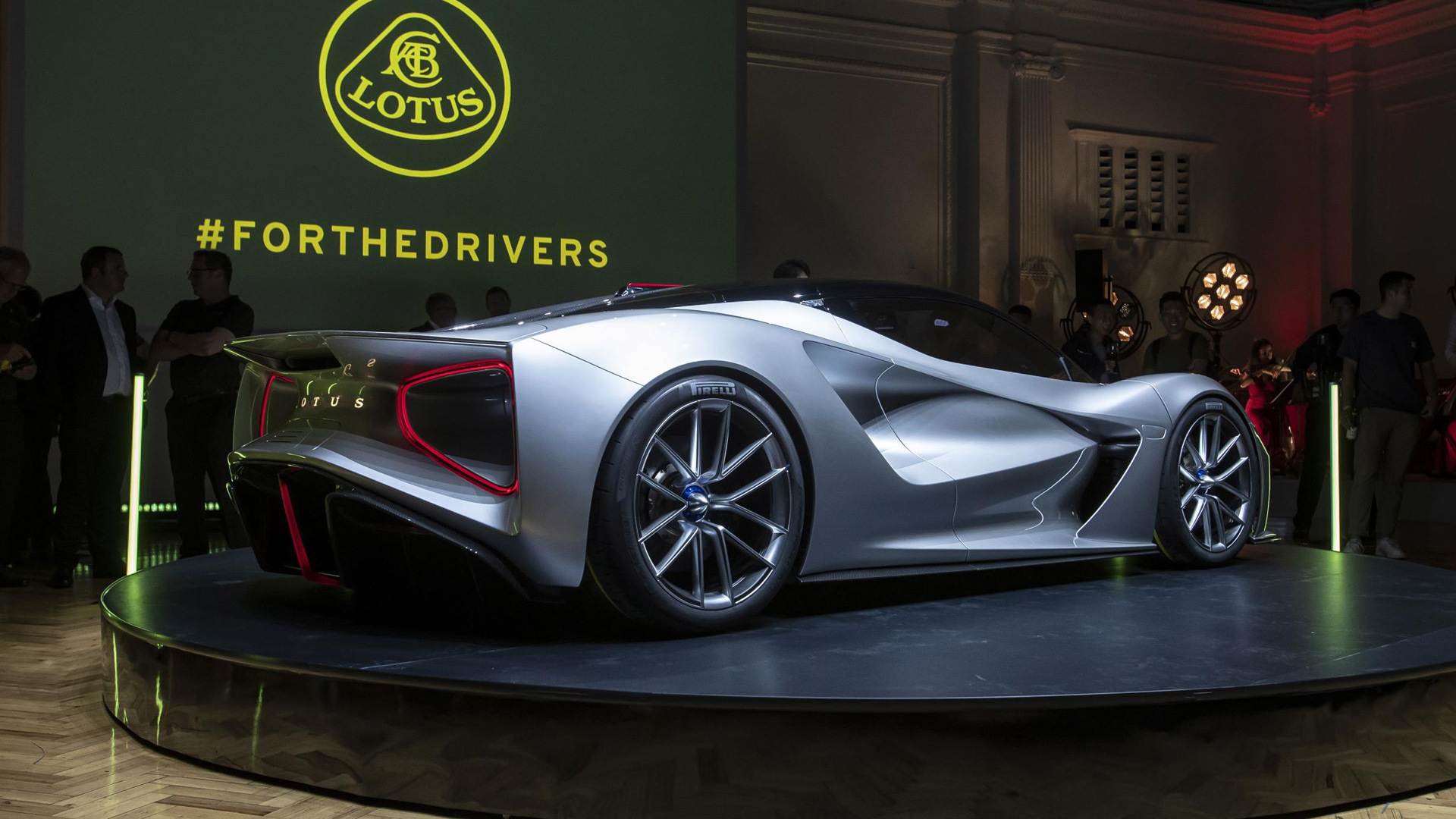 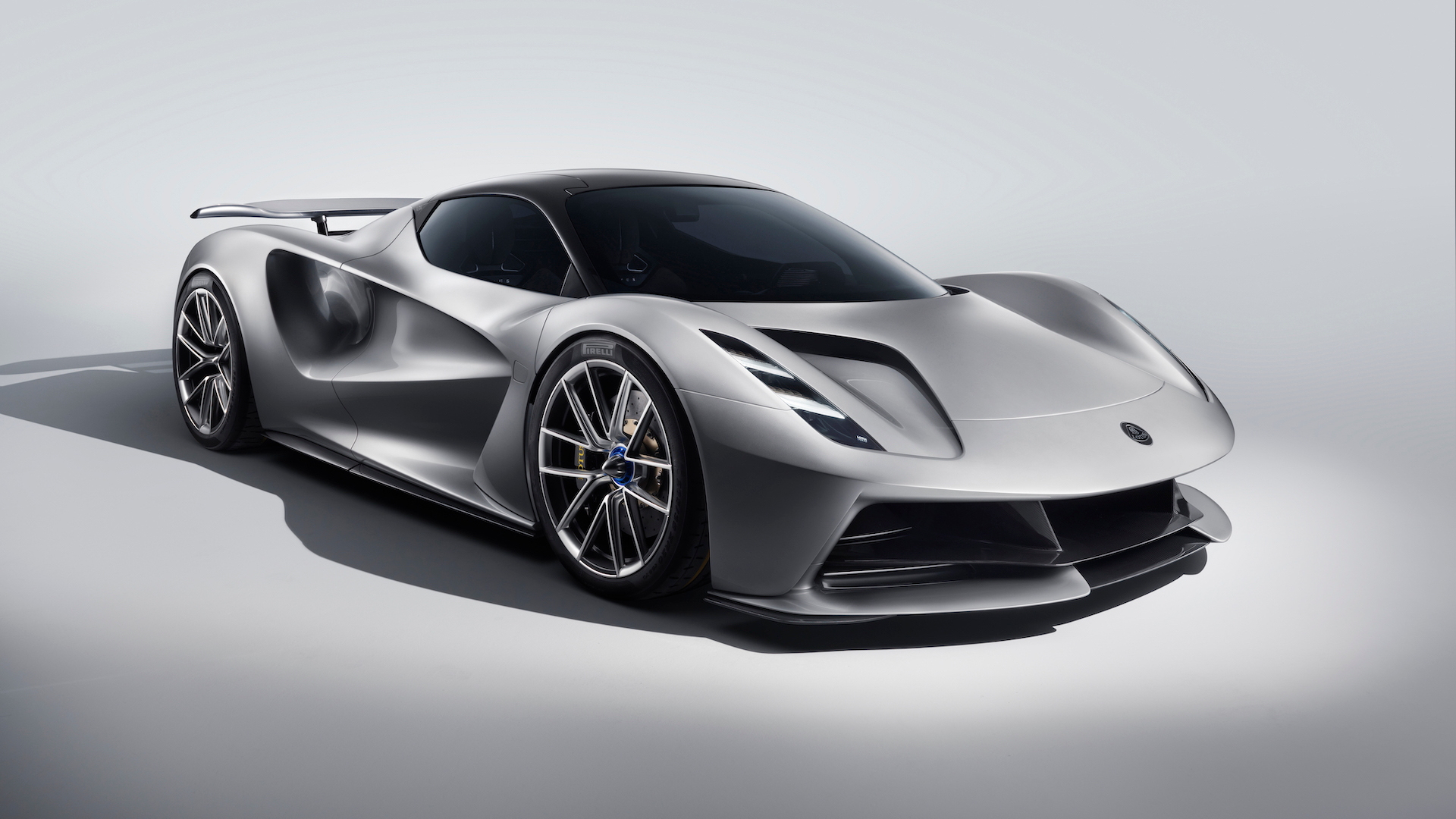 Ever since Geely took control of the small British sports car manufacturer Lotus, we've waited to see the fruits that partnership. Our interest further piqued last year when Geely announced up to a $2 billion investment in future product.

Consider the Lotus Evija a major step toward a brighter future for the company. On Tuesday in London, Lotus revealed the Evija (pronounced "ee-vi-ya") and made sure the world's top sports car companies know one thing: the Brits mean business.

The Evija is a battery-electric supercar—no engine, no range extender. The powertrain is the work of Lotus partner Williams Advanced Engineering, and at its core, features a 70-kwh lithium-ion battery. Lotus targets 1,973 horsepower and 1,254 pound-feet of torque and calls it the world's most-powerful automotive drivetrain. Four electric motors create an all-wheel-drive system (and torque vectoring) to scurry the electric supercar about.

Remember, we said the Brits didn't mess around this time.

While final figures aren't available, Lotus is confident the Evjia will sprint from 0-62 mph in less than 3.0 seconds and 0-186 mph in less than 9.0 seconds. Further, the top speed will be in excess of 200 mph, though the company hasn't shared the final figure yet. Looking at the frugal side of things, the electric hypercar will return 250 miles rated on the WLTP test cycle (expect a shorter range for the U.S.), and juicing the battery to 80 percent full will take 12 minutes using a 350-kw charger.

The Evija is built around a carbon-fiber monocoque (a first for a Lotus road car) that helps keep the weight down to 3,704 pounds, despite the heavy battery and motors. Its race-inspired suspension features three spool-valve dampers on each axle, one at each corner and an inboard-mounted third to control heave. The wheels are light-weight magnesium, 20 inches up front and 21 inches out back. They sit over AP Racing carbon ceramic brakes.

Taking in the exterior design, it's clear this isn't your father's Elise GT1. Perhaps we're dating ourselves there. The firm's designers looked at two areas for inspiration for the futuristic bodywork: the aeronautics industry and nature. The two themes appear to clash on paper, but the result is a low-slung and distinct-looking machine with laser lights to boot. The highlight of it all is the rear fascia, which features cut-throughs. Not only does the element look incredible, it serves a dual purpose; like Le Mans race cars, the tunnels channel air through the body shell for greater aerodynamics. A Formula One-style drag-reduction system is also incorporated into the rear wing. That deploys in the car's Track mode.

Inside, the ethos is "technical race car engineering" evidenced by the minimalist cabin and references to Lotus prototype racers from the 20th century. Before getting in, drivers will need to have their key ready because there are no door handles for the butterfly-style doors. Instead, the key will open the doors, and once inside, a roof-mounted switch closes them. Die-hard Lotus fans will know this clearly recalls the Esprit Turbo's roof console from the 1970s and 1980s. Here, it helps keep the interior looking tidy.

The interior is trimmed with the lightest materials Lotus engineers could find. They include carbon fiber, Alcantara to wrap the F1-style steering wheel, and more carbon fiber for the seat shells. Numerous controls are laid out on a ski-slope-style center stack, and yes, there's Apple CarPlay and Android Auto capability. The infotainment system has a screen that will record lap times and an onboard modem will allow drivers to recall previous track sessions and download over-the-air updates.

In a nod to the car's internal codename of Type 130, only 130 Evijas are destined for production at the not-so-low price of $2.11 million based on current exchange rates. Interested buyers will have to shell out about $310,000 for a build slot, and production is scheduled to begin in 2020.

Take it in because we're finally looking at what the Lotus of tomorrow looks like today.