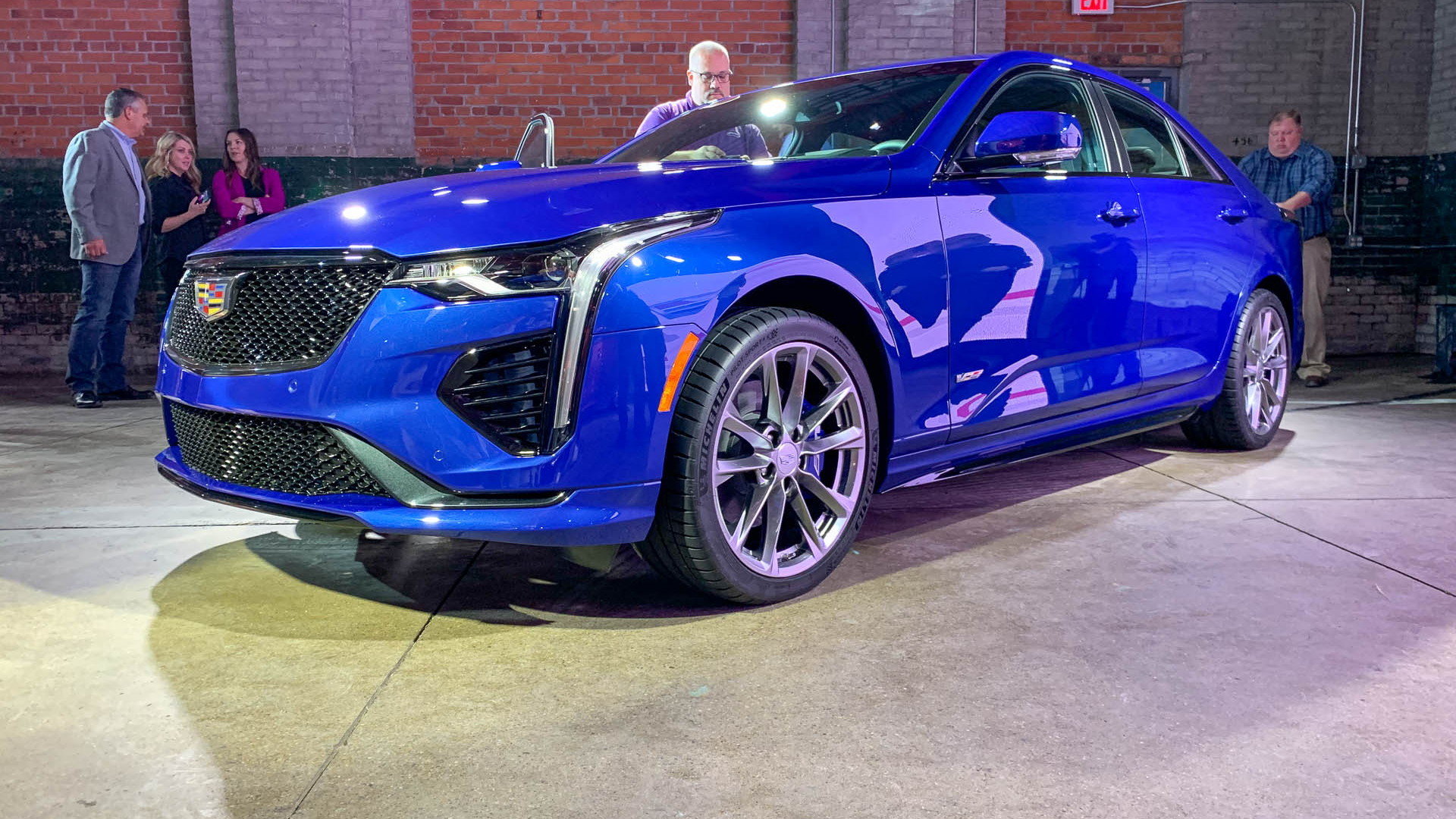 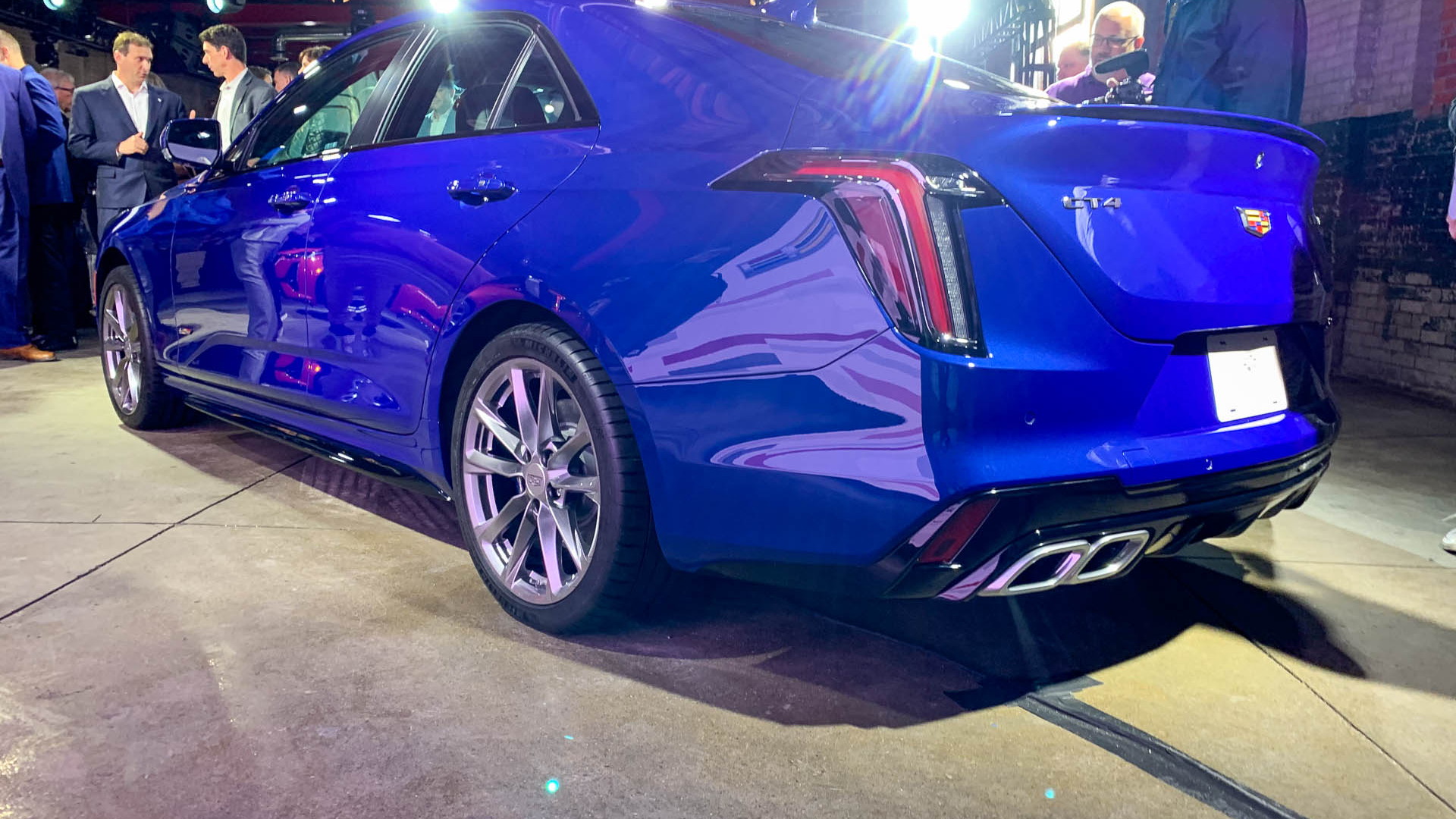 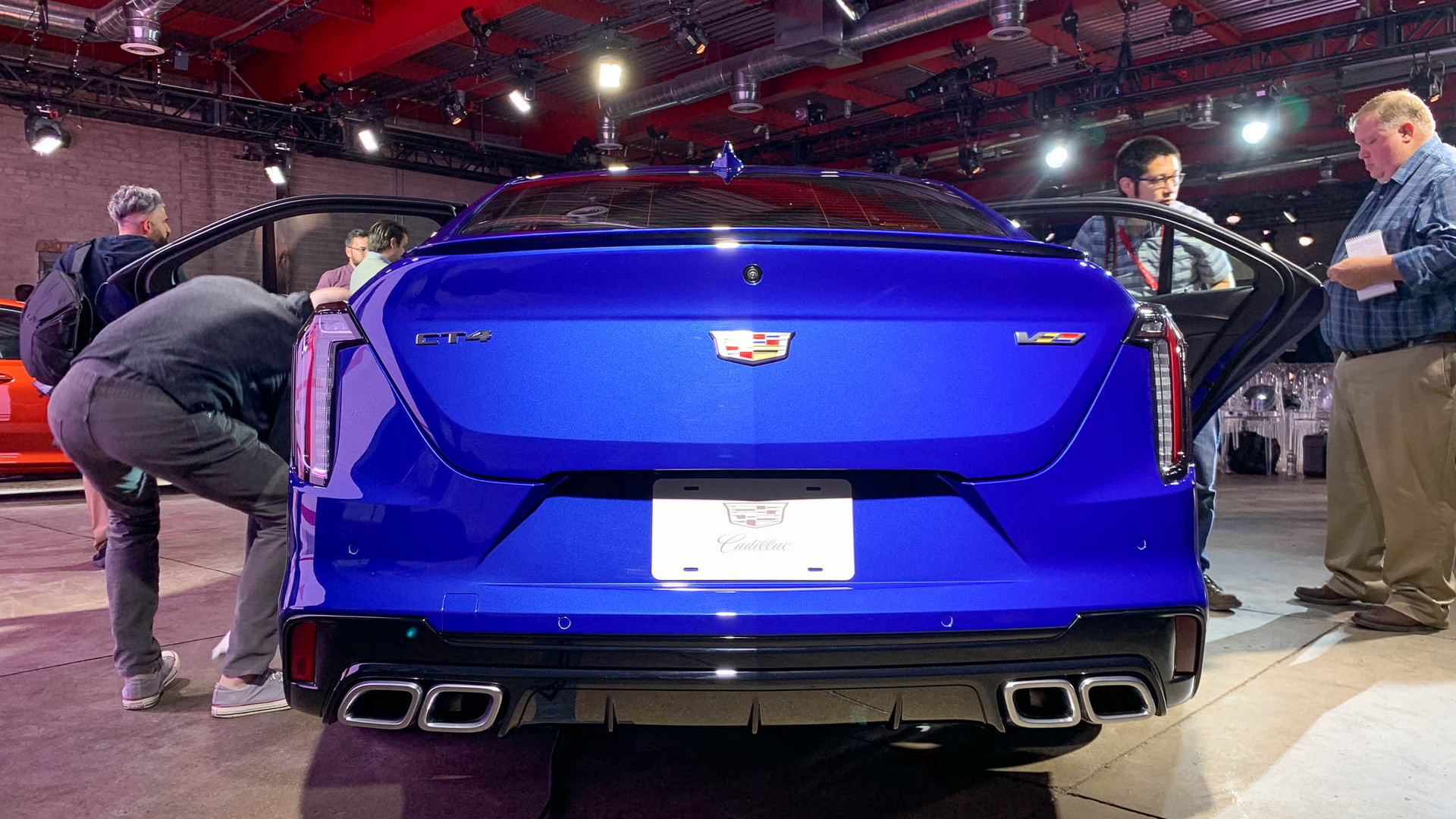 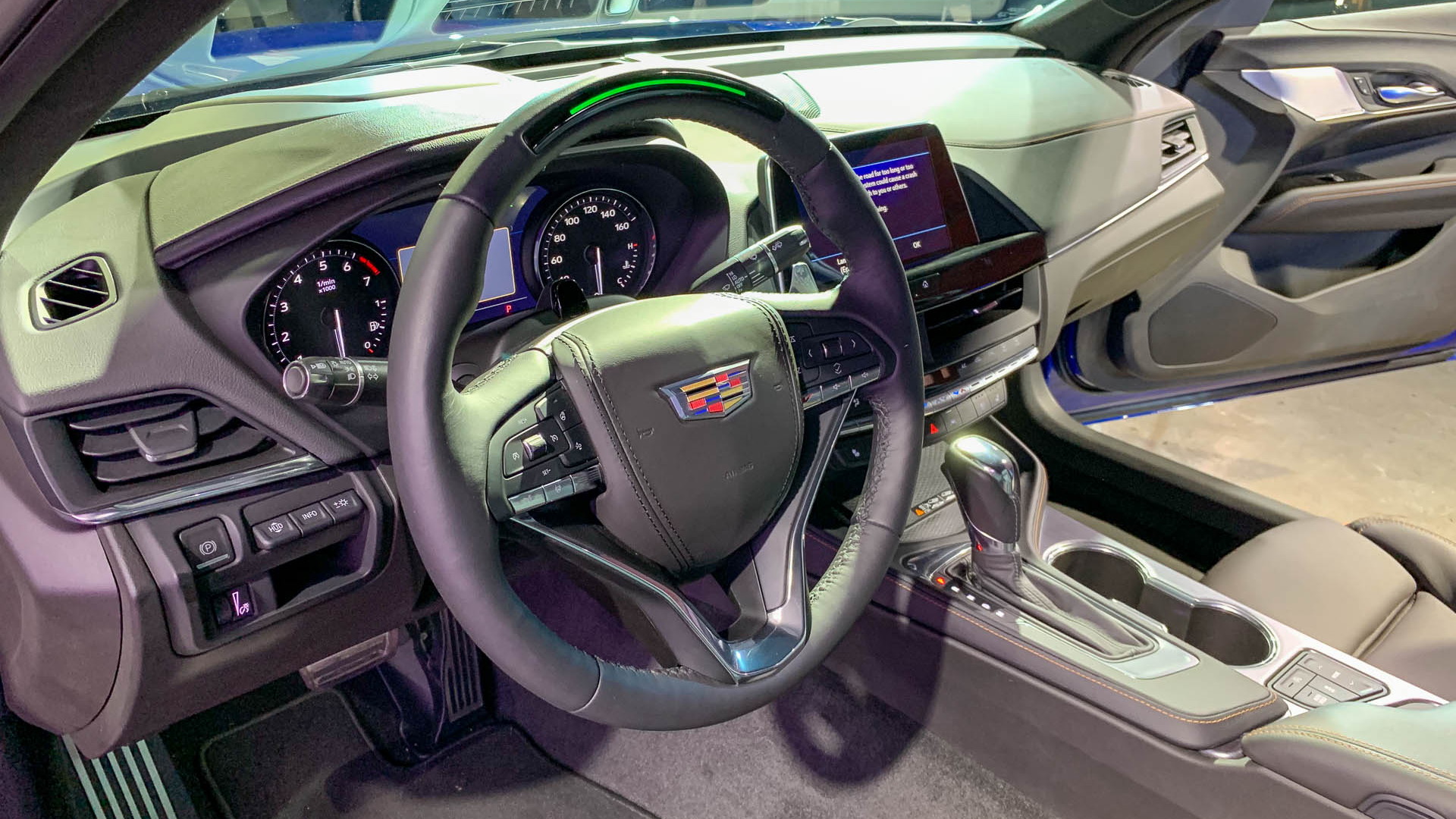 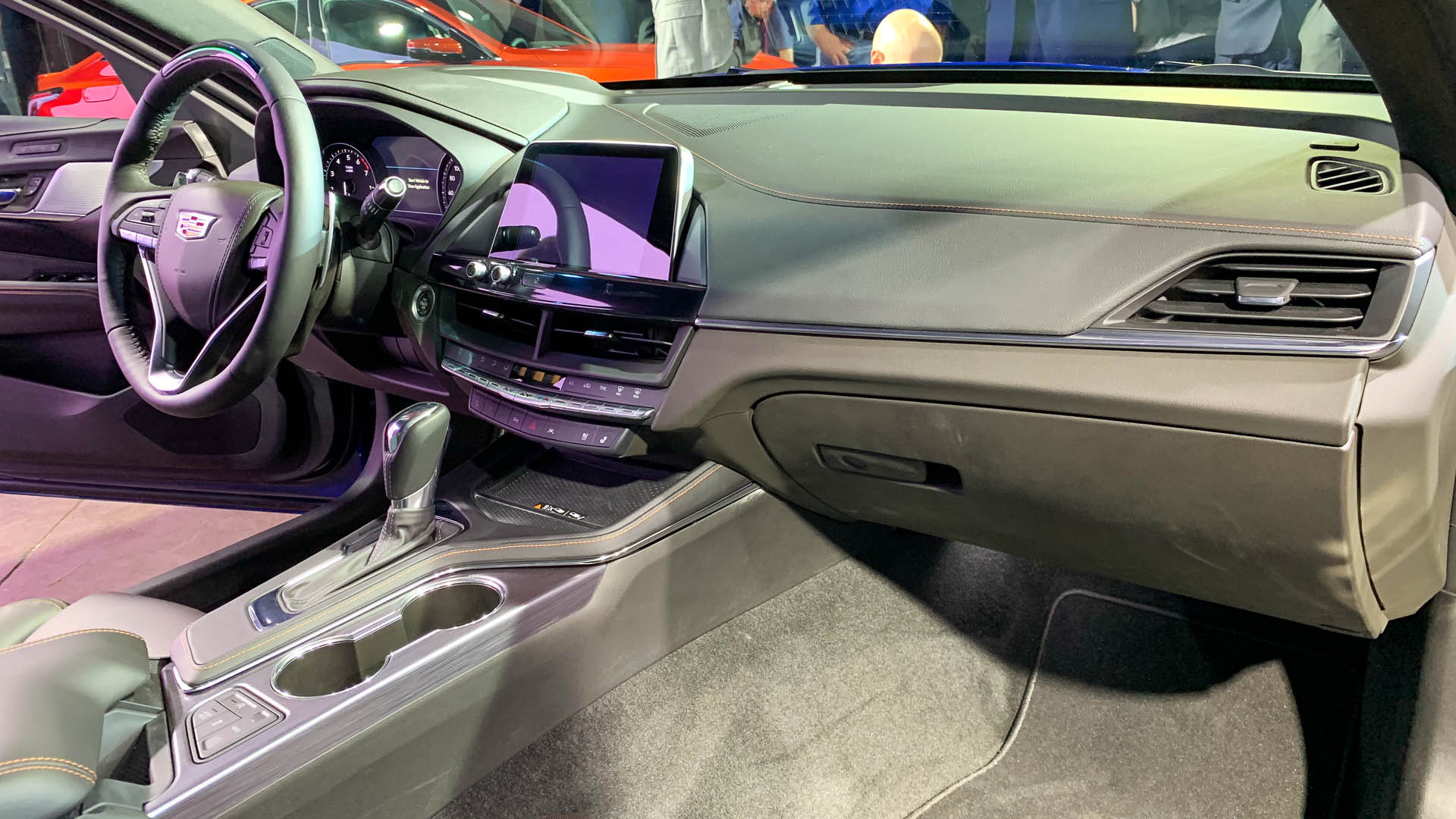 Cadillac is reworking its car lineup by replacing the CTS with the CT5 and the ATS with the CT4. We've already seen the CT5 in its standard guise, but the first 2020 CT4 to make its debut is the 2020 Cadillac CT4-V that the brand showed to media on Thursday in Detroit. Like the CT5-V, however, this won't be an all-out performance car. Instead, it will offer a modest bump in power, and some body and suspension upgrades to give it sport sedan credentials.

Power comes from a new 2.7-liter inline-4 that uses a twin-scroll turbo to make an estimated 320 horsepower and 369 pound-feet of torque. Like the CT5-V, it sends its power through a 10-speed automatic transmission to either the rear or all four wheels.

Also like the CT5-V, the CT4-V is based on the Alpha platform that underpinned the ATS and CTS, and gets fourth-generation magnetic ride control dampers. A mechanical limited-slip rear differential will be standard, as will a launch control feature, and five driving modes. Brembo front brake will help arrest momentum. Summer performance tires will be standard on rear-drive models, while AWD cars will get all-seasons; all will be mounted on 18-inch alloy wheels.

The CT4-V looks like a 7/8 scale version of CT5-V sedan. Cadillac hasn't released dimensions yet, but the CT4 appears to be about the size of the Genesis G70.

The exterior has a wide horizontal mesh grille, slim headlights, a front lip spoiler, and dark accents. A strong character line can be spotted along the sides, and the rear is punctuated by quad exhaust tips, a decklid lip spoiler, and a diffuser.

Inside, the CT4-V follows the formula set by the CT5 and XT4. An 8.0-inch digital screen sits in gauge cluster between two analog gauges, while a 10.0-inch touchscreen infotainment system is perched on the center of the dashboard like a tablet. Leather-clad sport seats will hold front passengers in place while a cramped rear seat could hold three, but really it's for two smaller adults. Orange piping and stitching is found throughout the cabin.

Cadillac will offer the CT4-V with a wide array of standard and optional safety features. GM's Super Cruise system that lets drivers drive hands-free on the freeway but requires them to pay attention will be optional. Other standard or optional features will include automatic emergency braking, active lane control, adaptive cruise control, a surround-view camera with a recorder, GM's rear camera mirror, and an automatic parking feature.

When it goes on sale in 2020, the Cadillac CT4-V will square off against the BMW 3-Series, Mercedes-Benz C-Class, and Audi A5.

Pricing and further details will be announced closer to the 2020 CT4-V's launch, but the base CT4 should be revealed in about a month.

—Kirk Bell contributed to this report