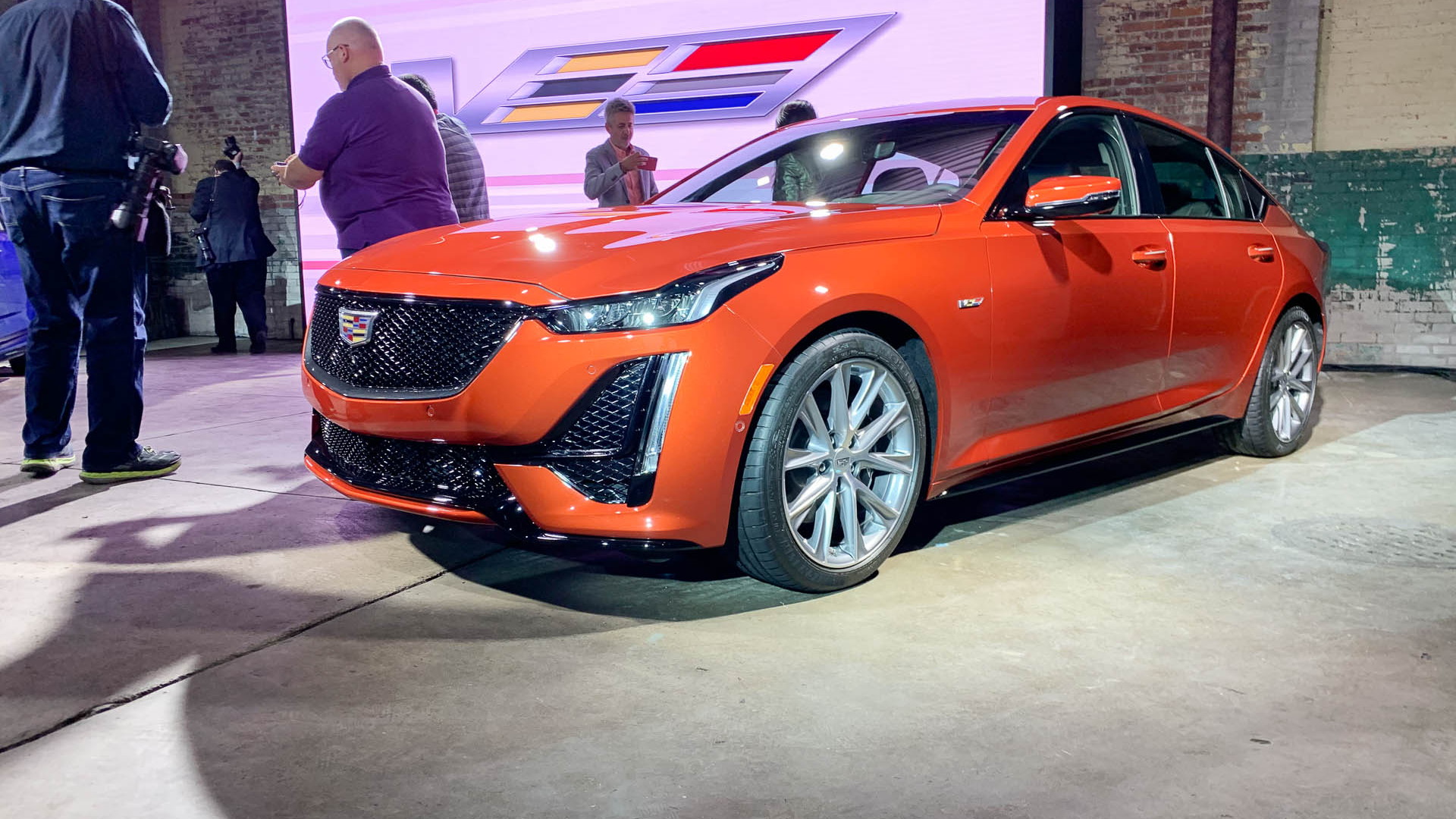 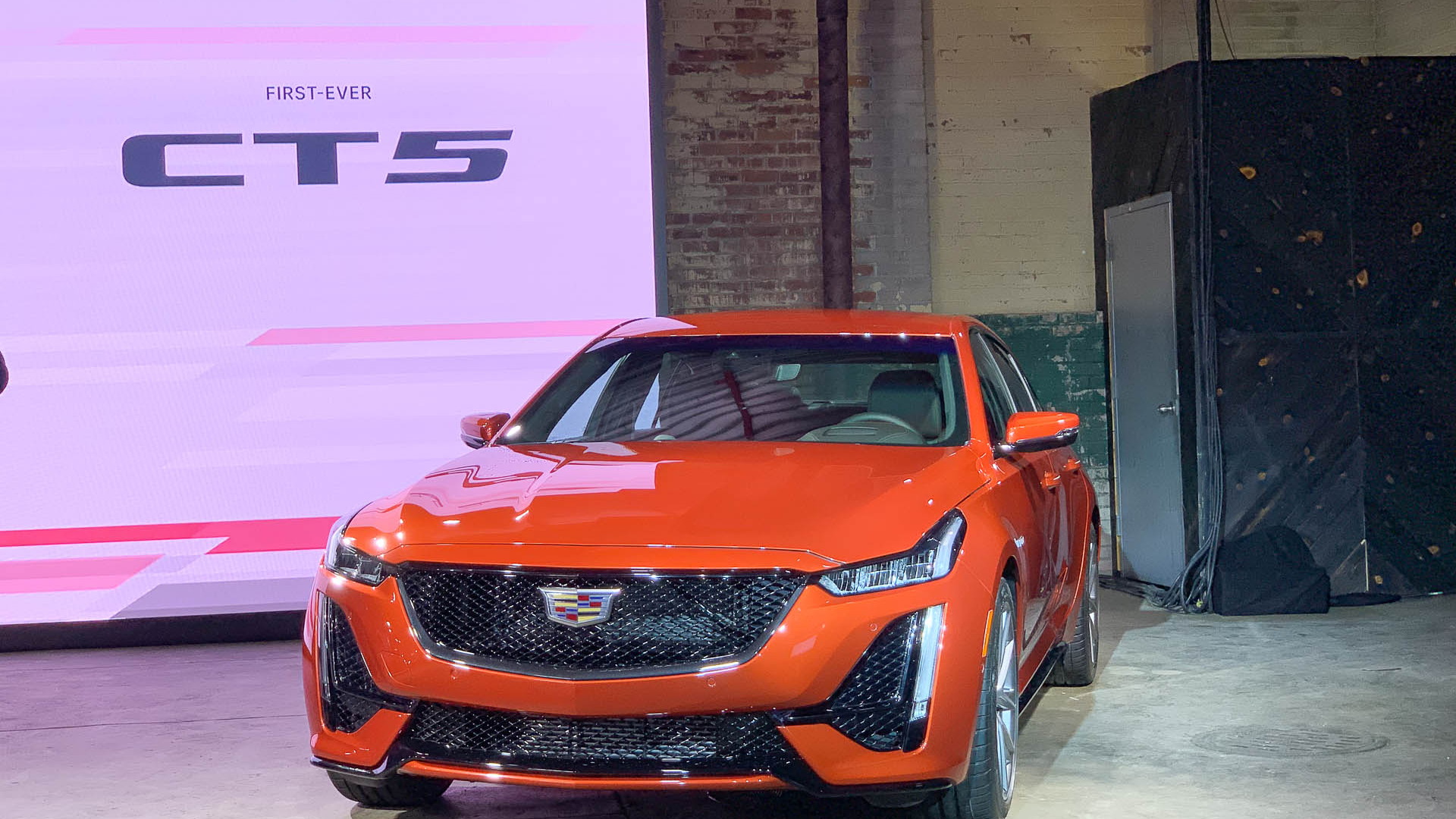 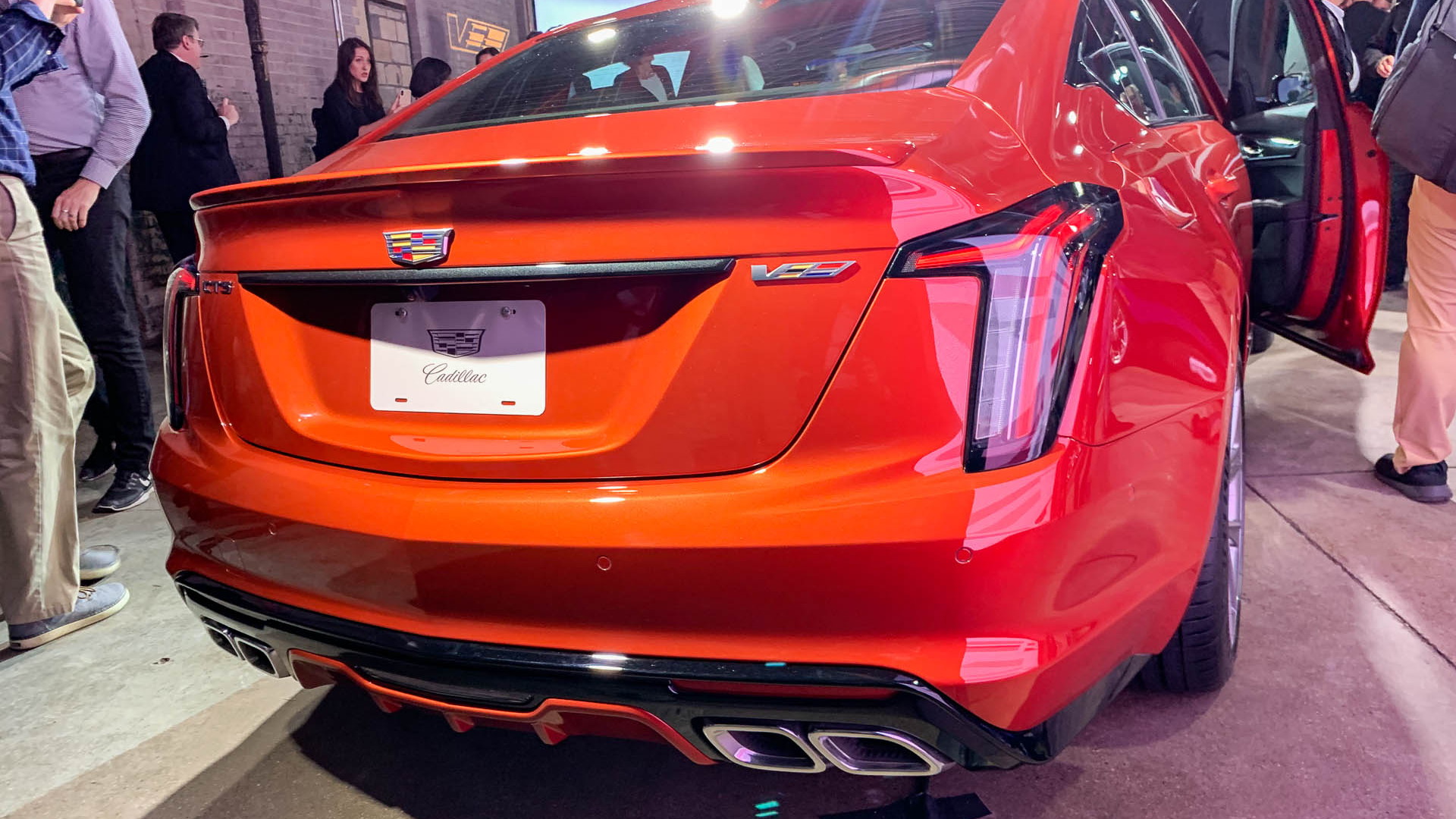 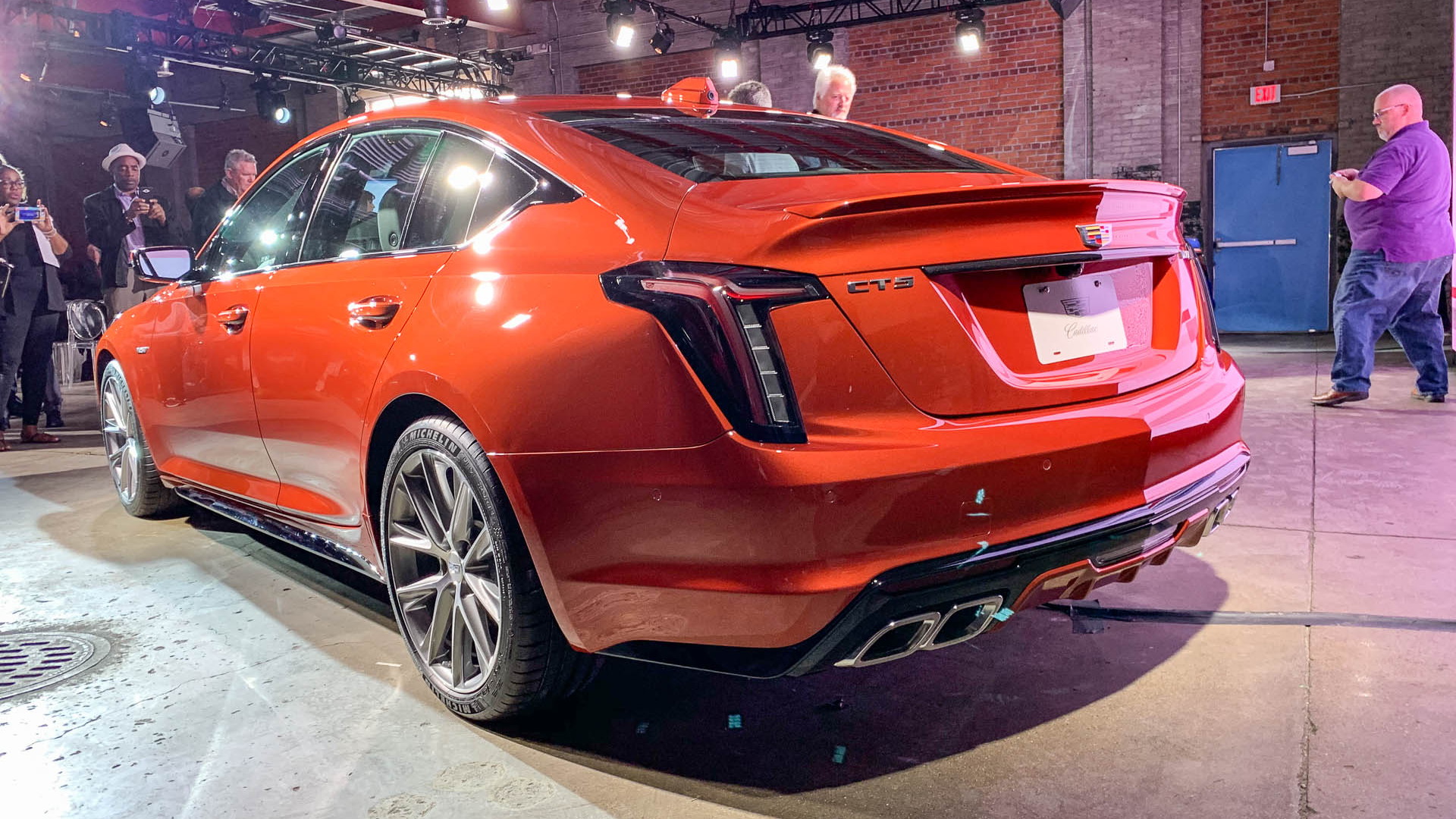 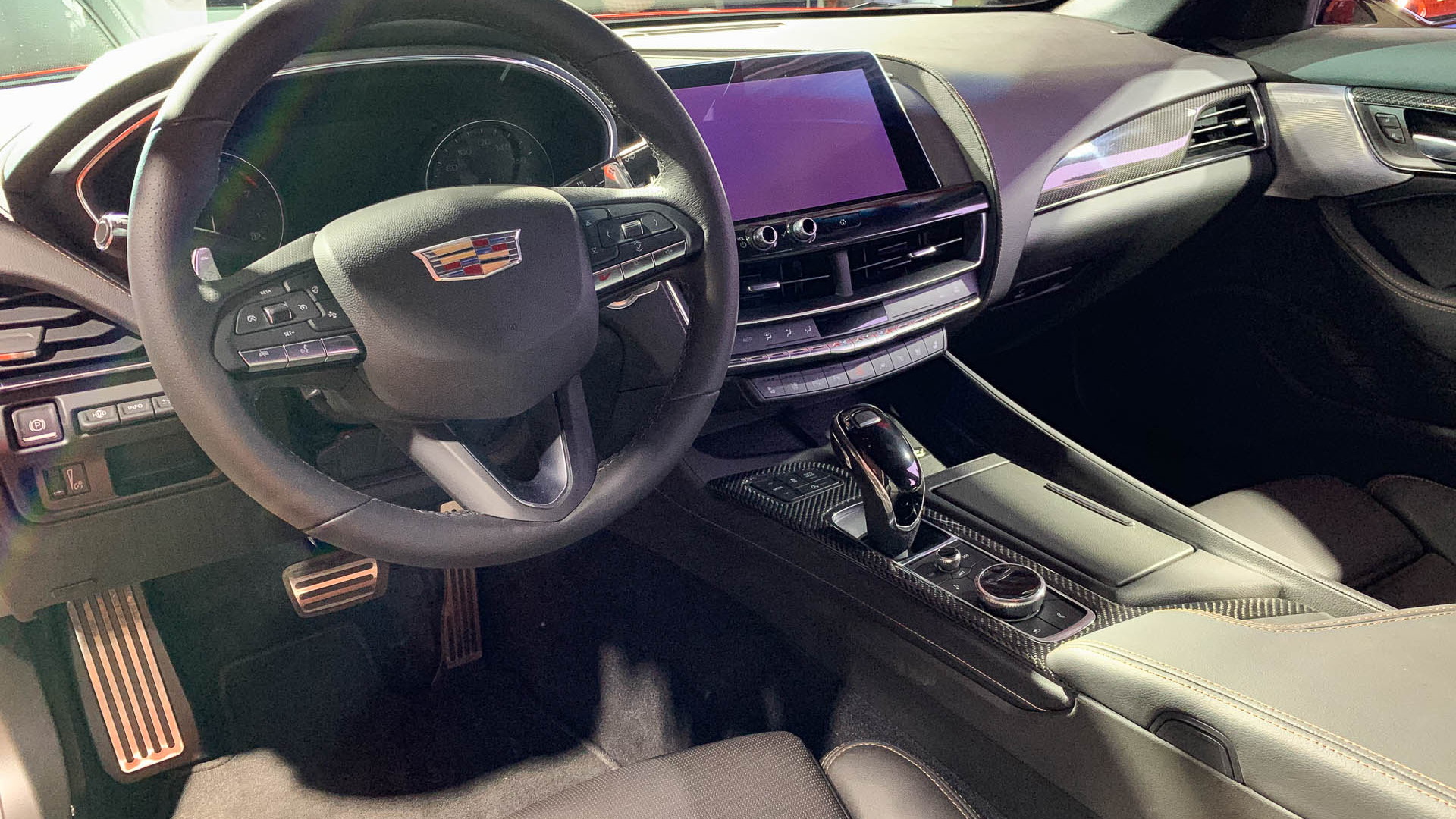 The 2020 Cadillac CT5 hasn't even launched and the luxury automaker has already juiced it, albeit modestly with a CT5-V. No, it's not the 650-horsepower CT-5-V we were expecting. It's the lower end of a two-tiered approach to the V name that makes 355 horsepower.

On Thursday, General Motors' luxury division unveiled the 2020 Cadillac CT5-V in Detroit. Power may be modest by V standards, but the car gets the looks, suspension, and brakes of a serious sport sedan.

The 2020 CT5, which was introduced in April at the 2019 New York International Auto Show, is a looker with a few rough details (see the black plastic filler on the rear pillar and the fact that its profile was meant to be a hatchback but it's a sedan). The 2020 CT5-V takes that sleek design and throttles up the aggression with a sharper front end, darkened trim, a rear lip spoiler, quad exhaust finishers, and a rear diffuser.

Under the CT5-V's sculpted hood sits a twin-turbocharged 3.0-liter V-6 that makes an estimated 355 horsepower and 400 pound-feet of torque. That power can be sent to the rear or all four wheels via a 10-speed automatic transmission.

The CT5-V also shares the outgoing CTS-V's Alpha platform. The suspension uses the fourth generation of the magnetic ride control dampers that also appear on the Corvette and Camaro. Cadillac says the CT5-V will have its own suspension tuning and come standard with an electronically controlled limited-slip rear differential. Drivers will be able to choose from five driving modes, and a launch control feature will be standard. Brembo front brakes will increase stopping power. They'll sit behind 19-inch summer performance tires on rear-drive models and all-season tires on AWD models.

Inside, the CT5-V's cabin has a sporty feel with carbon fiber trim and orange piping and stitching on the leather-covered sport bucket seats. In back, it has three seat belts and two bucket seats.

The gauge cluster houses an 8.0-inch digital display nestled between two analog gauges. A 10.0-inch touchscreen infotainment system with standard Apple CarPlay and Android Auto compatibility sits like a tablet atop the center of the dashboard.

The CT5-V will offer a bevy of standard and optional safety features. Highlights include active lane control, automatic emergency braking, adaptive cruise control, a surround-view camera with a recorder, GM's rear camera mirror, an automatic parking feature, and GM's Super Cruise system that lets drivers drive hands-free on the freeway but requires them to pay attention.

With its 116-inch wheelbase and 193.8-inch overall length, the CT5-V will square off with the Mercedes-Benz E-Class and BMW 5-Series when it goes on sale in 2020.

Pricing will be announced closer to launch.

—Joel Feder contributed to this report