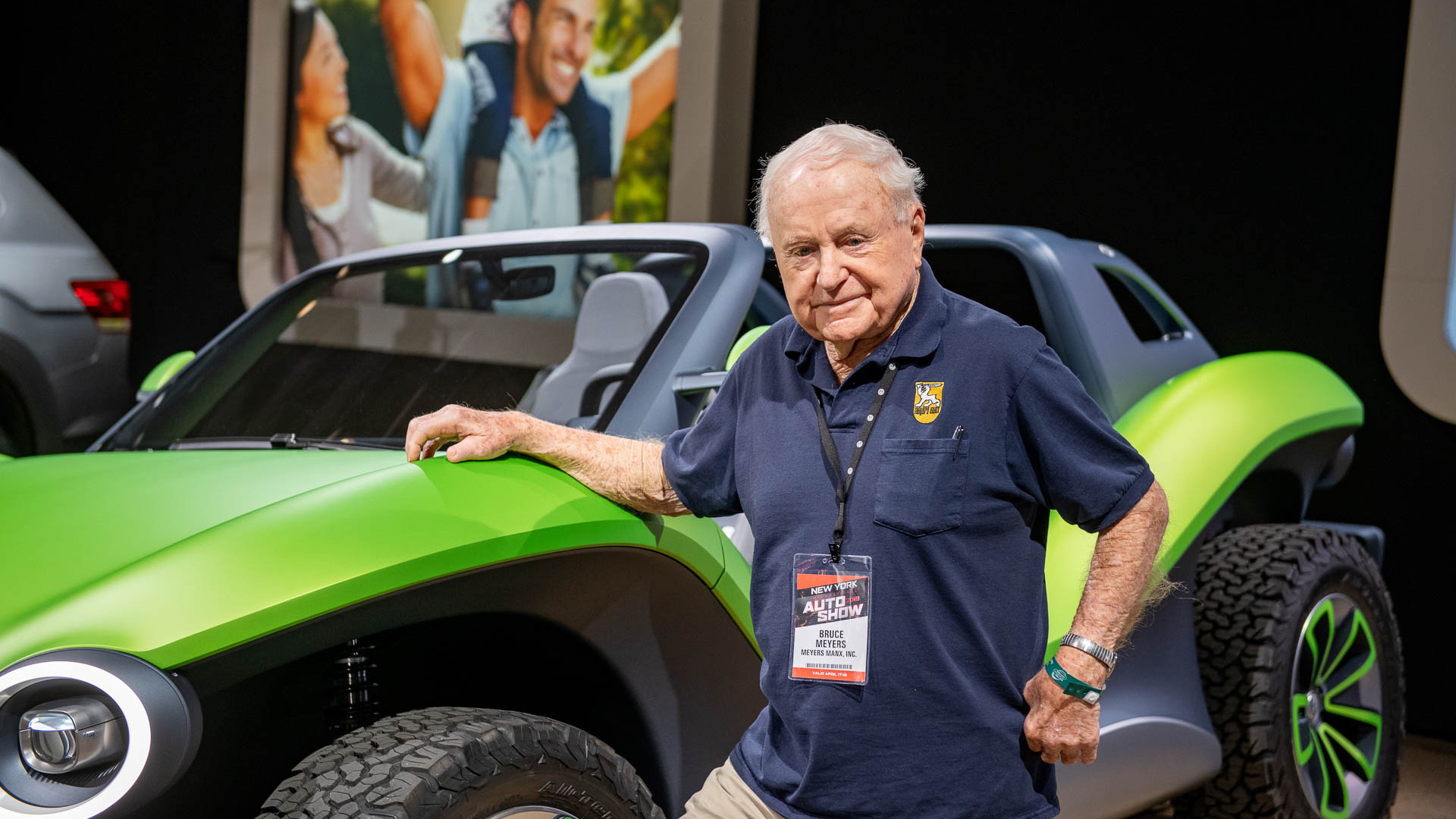 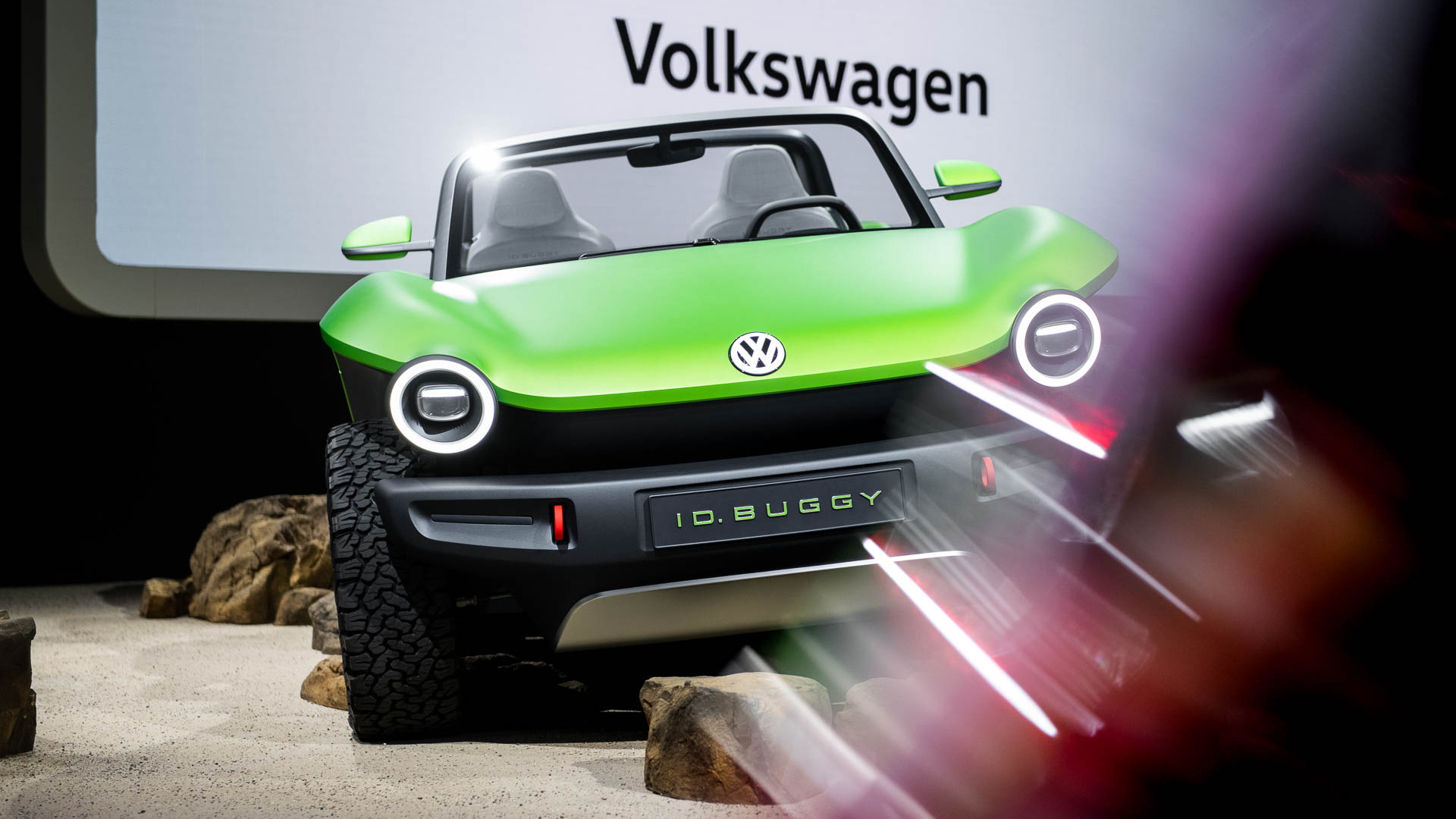 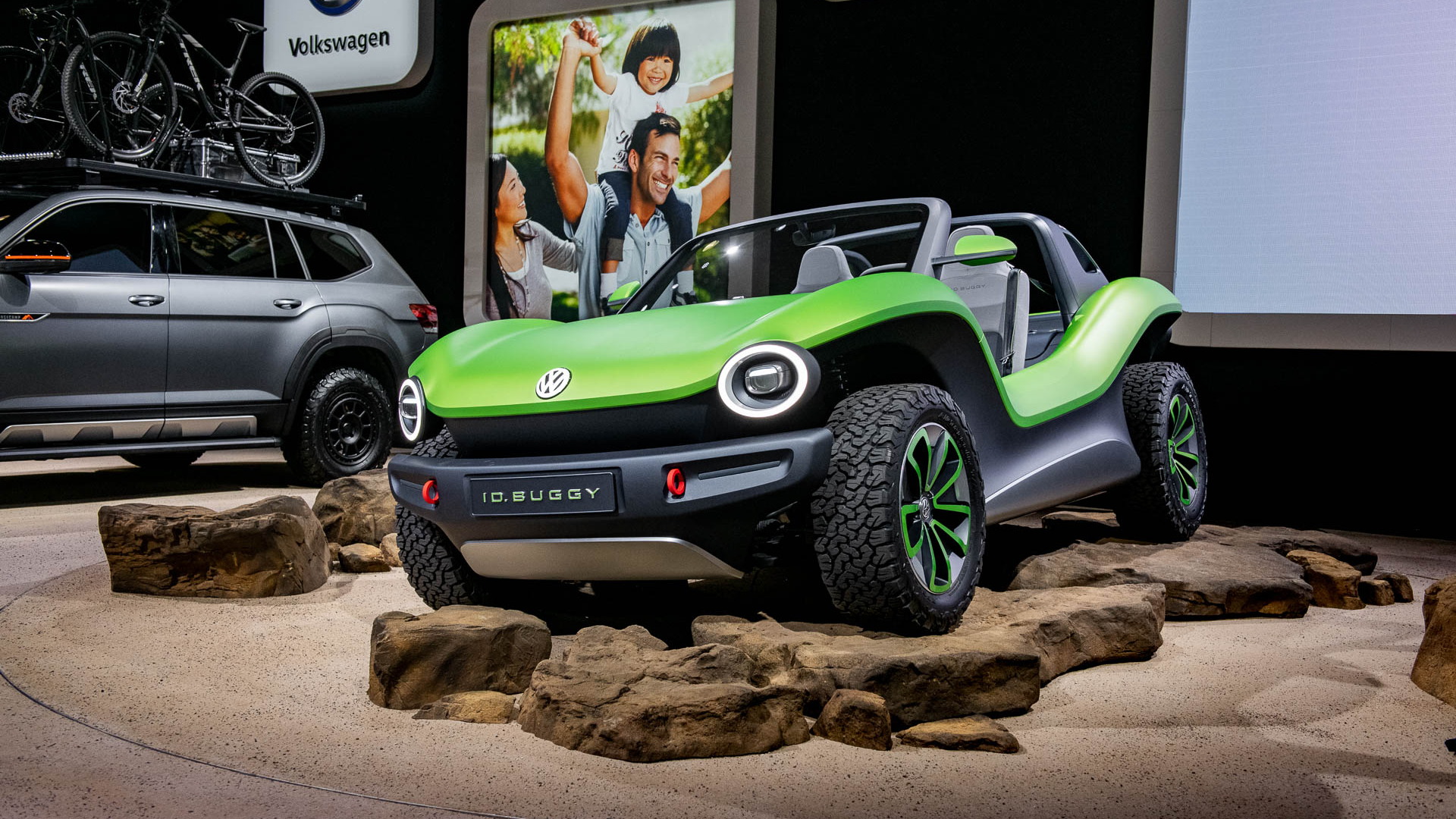 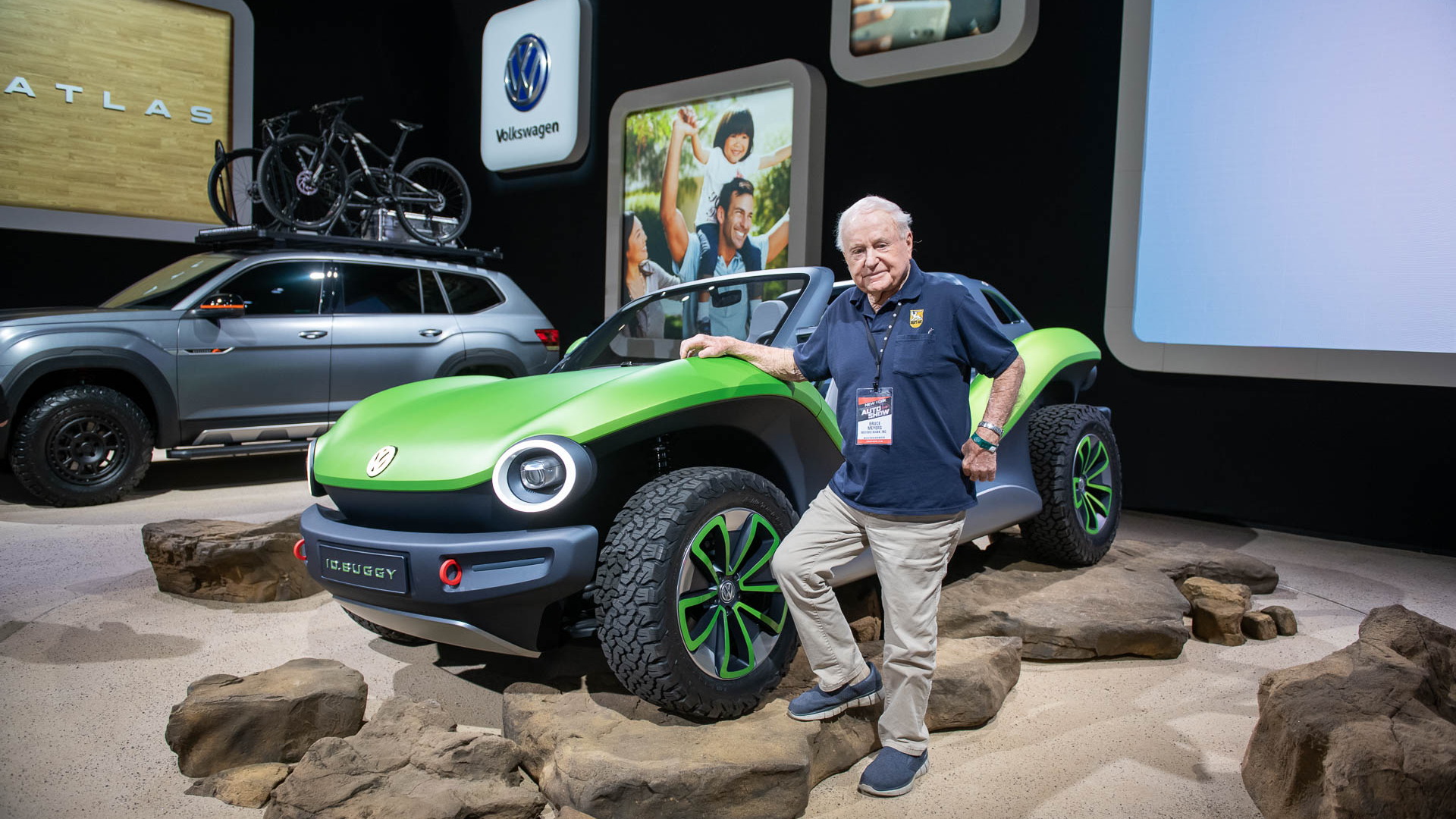 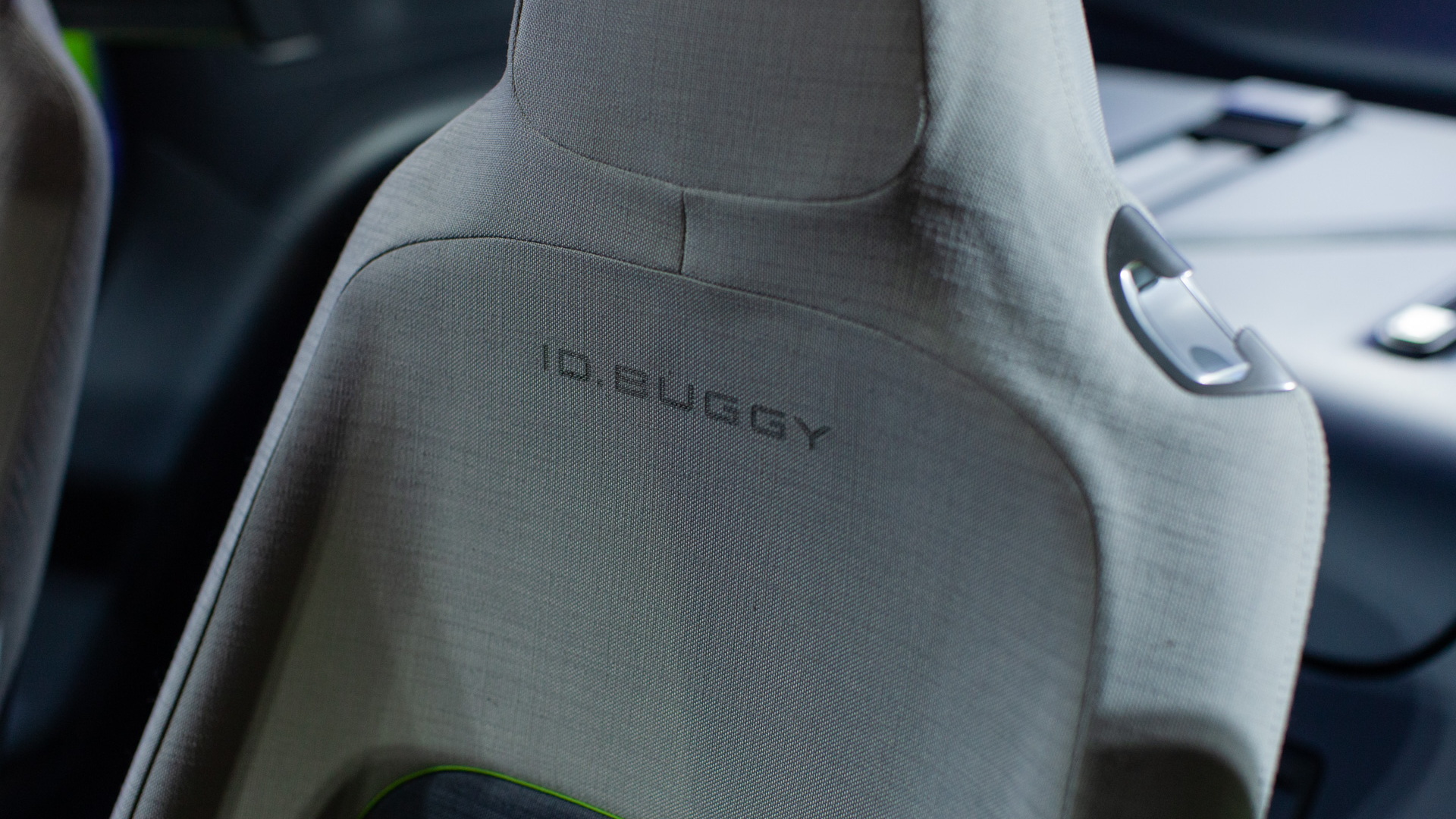 Bruce Meyers ran with people you probably shouldn’t trust with your wallet.

His early adult life in the 1960s was basically a Beach Boys song. Now, in his mid-90s, Meyers recollects his past success and misfortunes in winding allegories that meander like his buggies on a beach—they rarely take a straight path to the finish line. Although he was wheeled around the New York auto show for media interviews, Bruce hardly missed an opportunity to walk 10 yards out of a conference room toward the electric buggy homage built by VW and strike a trailblazing "Captain Morgan" pose for pictures.

Bruce’s friends in the 1960s were abalone divers—ski bums in the winter—who would dive off the Southern California coast into tepid waters to retrieve the mollusks to fund their worst habits. Each abalone dozen hauled in $7, each diver could pull in 100 dozen abalones a day. That kind of money—$5,000 a day, inflation-adjusted for today—burned holes in their pockets.

DON'T MISS: Volkswagen's beach buggy is back and this time it's electric

“College-age, but not college-educated,” Meyers says with a smile. The money went to parties that never ended, bad decisions, and sometimes the natural result of both: bail.

One diver, Bruce says, graduated ski-bum-abalone-life to be a bullfighter in Mexico—why not?

It’s that kind of free spirit, devil-may-care attitude that prompted Bruce to build an off-roader— maybe the ur-off-roader, his Meyers Manx. This year at the Geneva auto show and New York International Auto Show, VW paid tribute to Bruce’s dune buggy by bringing it into the 21st century in the form of the VW ID Buggy Concept. The small EV may not have a life in mainstream Volkswagen showrooms, but Meyers and his Manx were hardly mainstream anyway.

Meyers, a perpetual art student, and son of a Broadway singer and automotive pioneer, didn’t care much for gobs of money that came with the early Manx.

It was the “gesture,” he said, the form of creating movement in shapes that he drew with his fingers in art school. Every portrait needed movement; every shape needed motion. His art would come to life in the first fiberglass bodies that would ride atop Volkswagen Beetles that he built in his garage.

Its form was fun, he says. Big wheels, small cars, no doors.

“The damn windshield was so blatant…it was thumbing its nose at tradition,” he said. “Imagine the life you might lead (in a dune buggy).”

Meyers could only produce one kit each month beginning in 1963, and he said he gave every kit all the attention he could.

READ NEXT: 2019 New York International Auto Show in pictures: The cars, SUVs, and crossovers you need to see

When his Manx was first featured on the cover of Car and Driver in August 1969 orders ballooned from a few to more than 300. His single fiberglass mold couldn’t possibly fulfill all the new orders, so Bruce made more—16 to 18 molds, up from just one that he used to make one kit per month. Production went from one per month to 25 a day; 60-70 employees helped with that.

His factory hummed. Steve McQueen and Chuck Connors wanted buggies. Orders rolled in faster than Bruce could make them.

With hundreds of orders and less time, competitors and copycats ate Bruce and the Meyers Manx alive. In 1969, Bruce took to court one of his biggest rivals and lost, effectively opening the doors for every copycat model thereafter. In 1971, Bruce was basically out of business.

“Judges and lawyers don’t know anything about art,” he said. “I didn’t care. I’ve never been terribly interested in money. I was not too smart.”

Bruce Meyers and the Meyers Manx

Rules are meant to be broken

Bruce bitterly left his business and the Meyers Manx mostly behind.

He made tooling for sailboats and restored a Rolls-Royce until 1994, when he was invited to lead a procession of about 1,100 cars, including about 300 dune buggies—some of which were lifted designs from him.

“They all had my stuff…I said, ‘I’m not going to lead those (expletive) anywhere,’” Bruce said.

A friend pulled him aside and told him that holding onto the past wouldn’t help.

From then, Bruce and his wife Winnie started the Meyers Manx club—which includes competitor vehicles—and its membership has grown to more than 5,000 vehicles.

“All of those guys who were my enemy are now my friends,” he said.

Bruce’s legacy among VW owners is largely cemented as the original maker of the dune buggy and as a founding father for off-road enthusiast vehicles today.

Bruce says new electric vehicles like the ID Buggy Concept are proof that the spirit and enthusiasm that once launched his Manx in the 1960s are timeless.

“I think everybody wants to break the law a little bit,” he said.