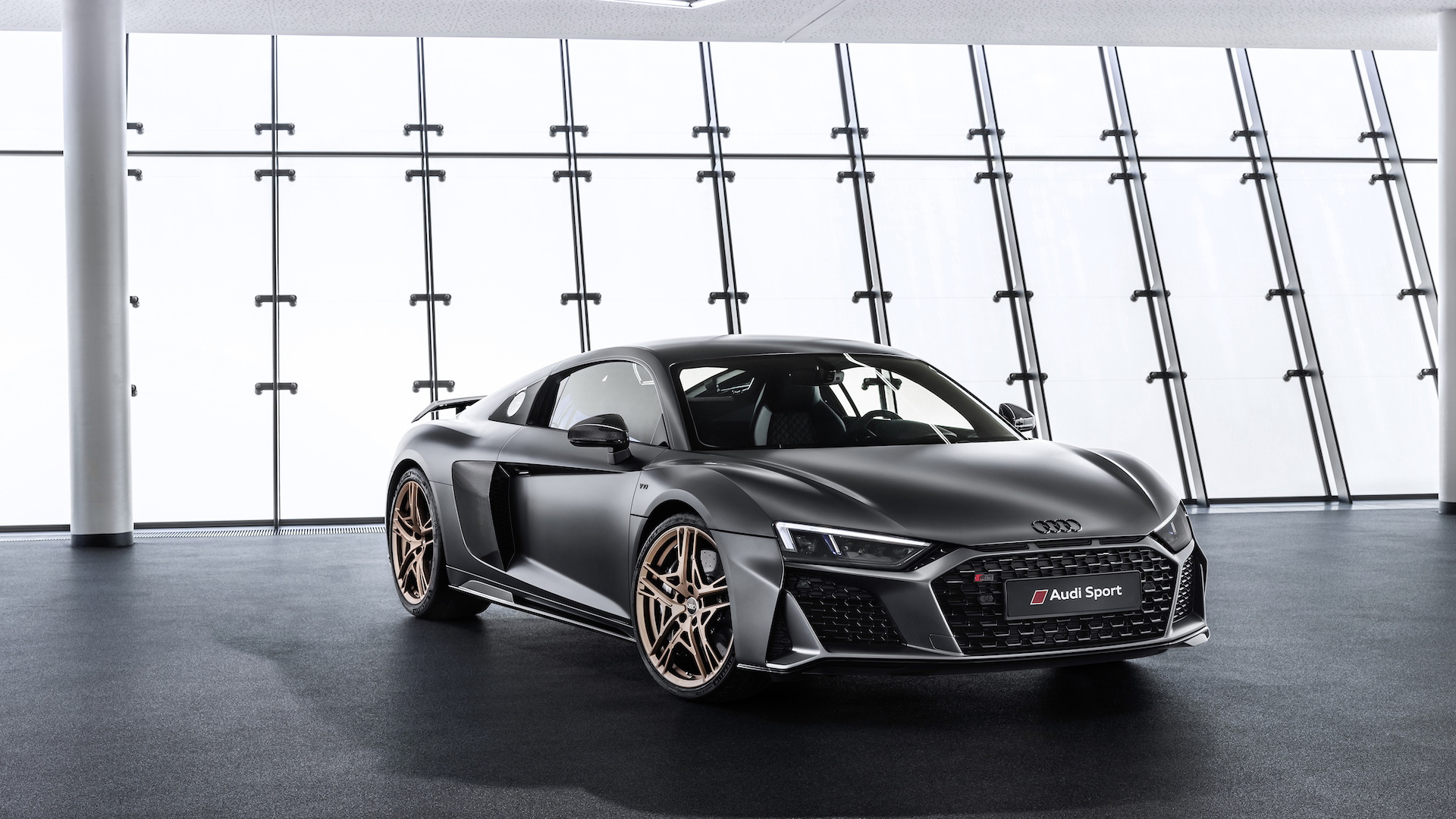 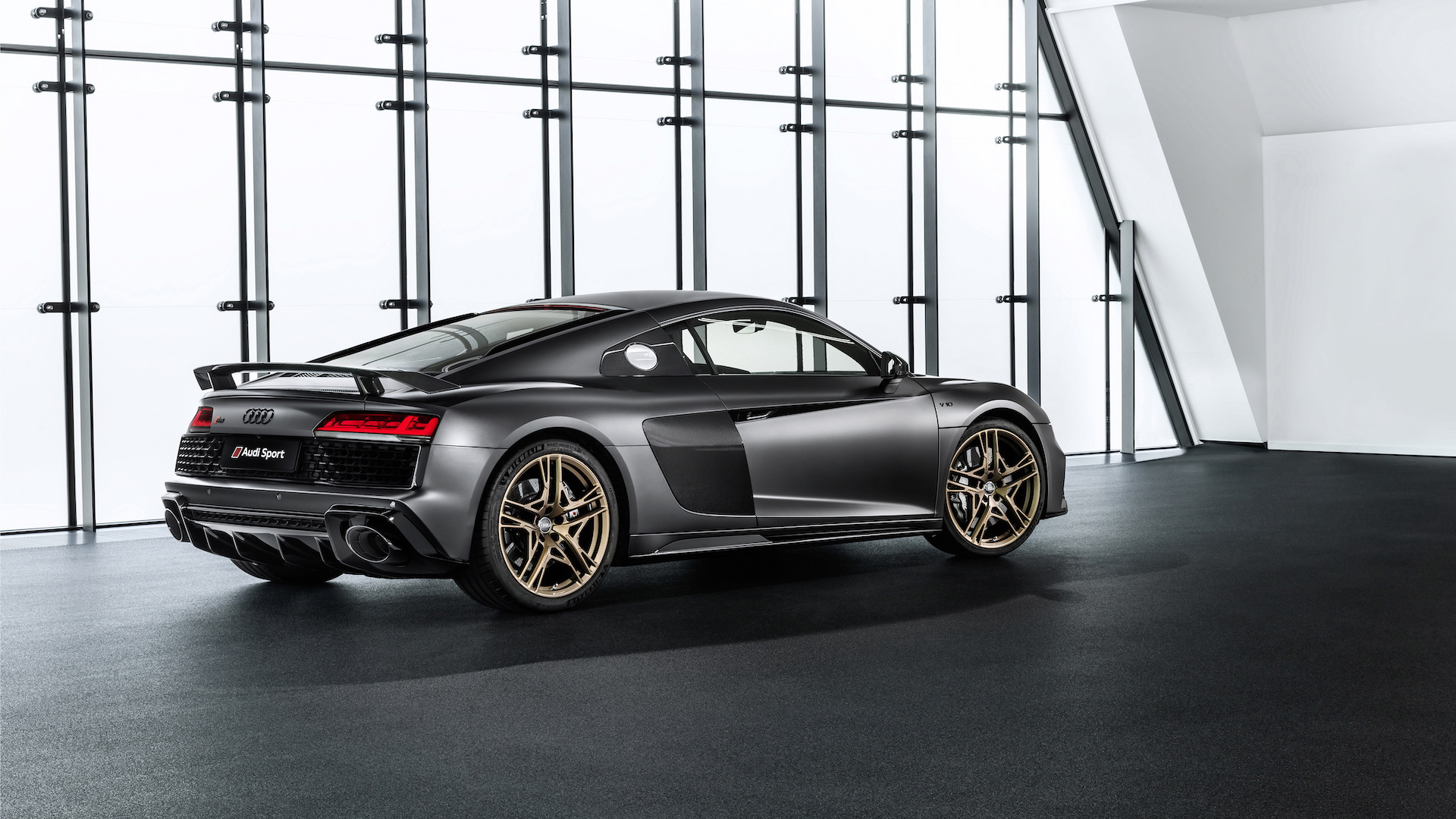 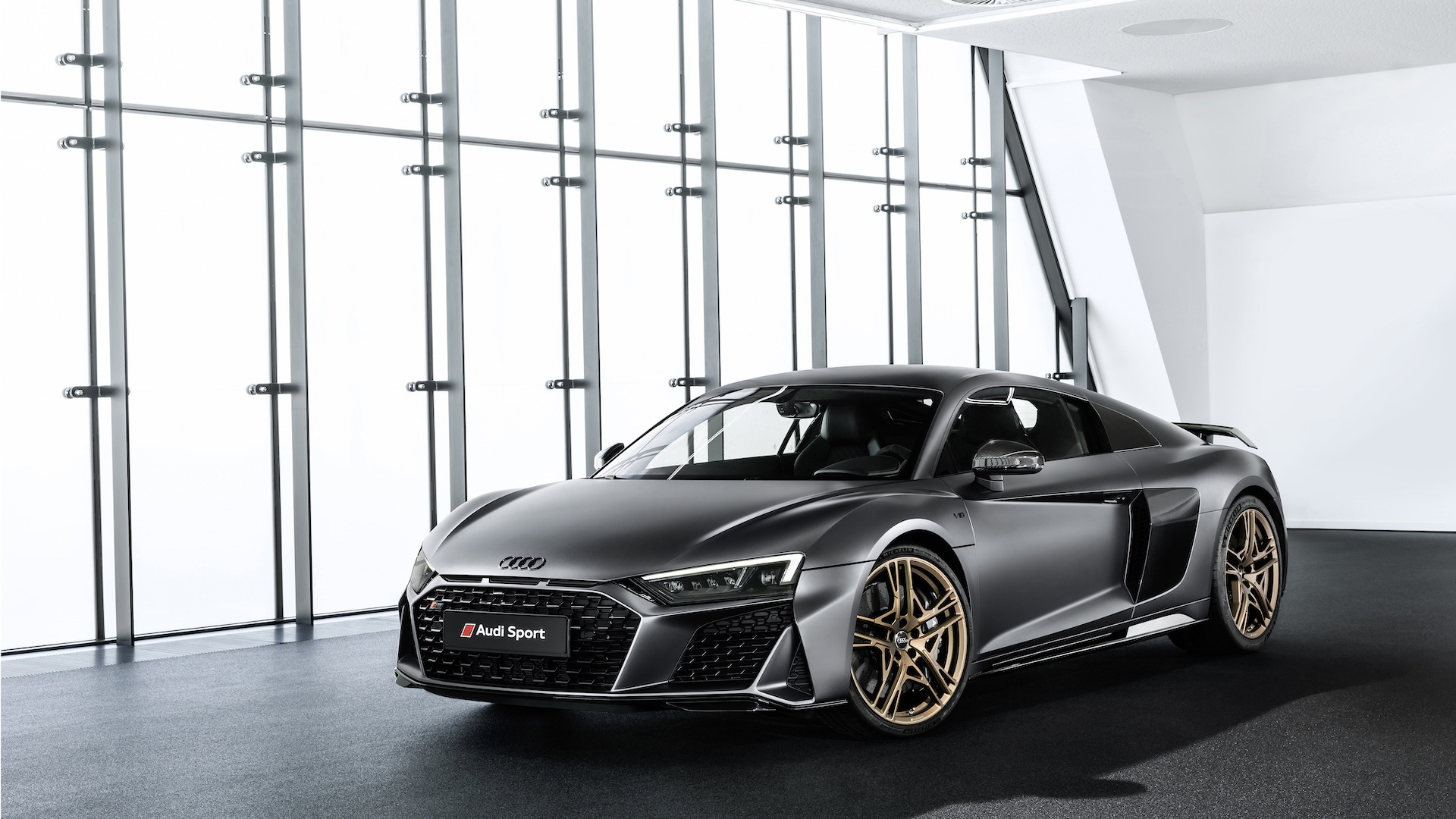 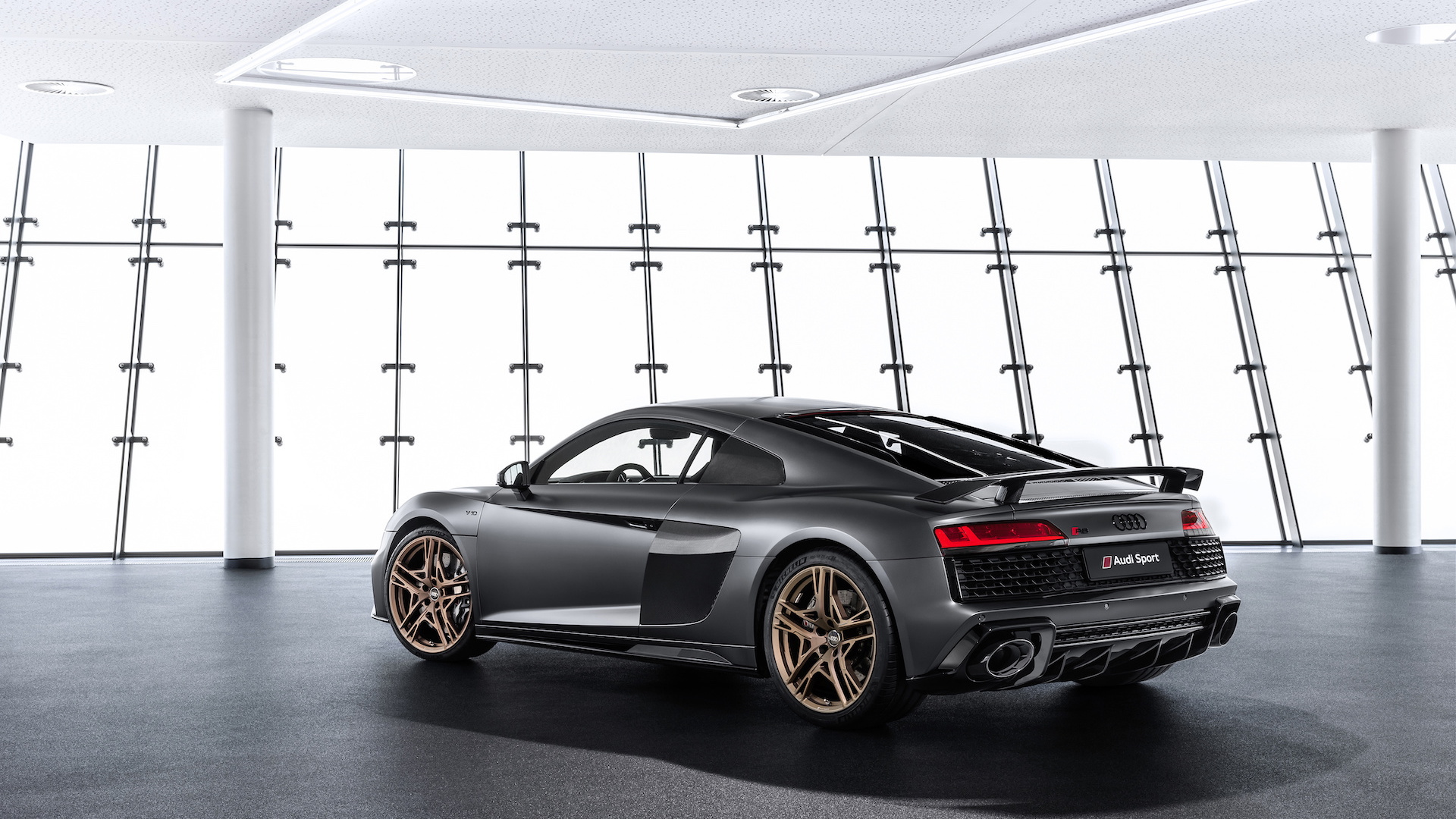 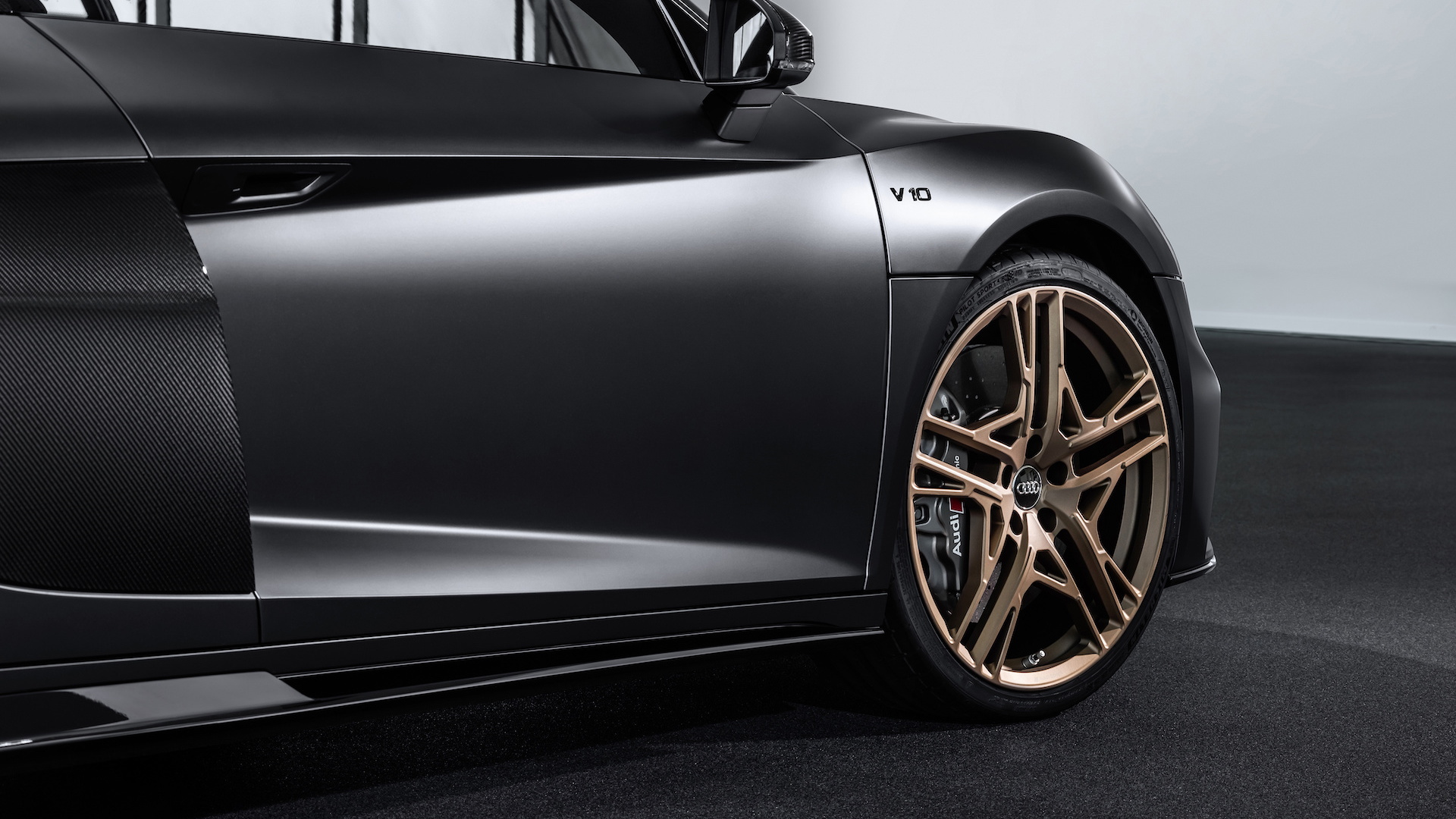 Ten years ago, Audi graced its halo sports car with a hallmark engine: the 5.2-liter V-10 mill that made 525 horsepower. Today, Audi honors the a decade of the V-10 with a new special edition car: the R8 V10 Decennium.

Recall, the Audi R8 first entered production for the 2006 model year powered exclusively by a 4.2-liter V-8. Three years later, Audi plucked the 5.2-liter V-10 from the Lamborghini Gallardo and stuffed it in the middle of the R8. The V-10 has arguably become the sports car's calling card. Today, it makes 620 hp.

"Decennium" means decade in Latin. The 2019 R8 Decennium is offered only as a coupe and features a special Daytona Gray matte exterior color paired with bronze accents. Specifically, the 20-inch wheels and the engine's intake manifold get the bronze look. Elsewhere, gloss black accents provide further contrast from the gray, including on the Audi badges, front spoiler, side sills, and rear diffuser. The side blades and mirror housings, meanwhile, feature a gloss carbon-fiber finish.

The cabin receives a color palette similar to the exterior with black upholstery complemented by black and copper contrast stitching on the seats. The same copper stitching is also found on the Alcantara-trimmed steering wheel (with a black 12 o'clock mark) and gear selector. Carbon fiber makes up the interior's inlays to break up the black hues. Finally, Decennium logos adorn the center console and doors, and the same logo is projected on the ground from the puddle lights when the driver or passenger opens the doors.

Audi will build 222 examples of the R8 Decennium. Audi made no announcement about examples coming to the U.S., but Motor Authority has reached out to Audi to learn how many, if any, will make their way to these shores and how they would be priced. If U.S. prices match European prices, the R8 Decennium would sell for $252,000 here based on current exchange rates. We will update this story when we hear back.