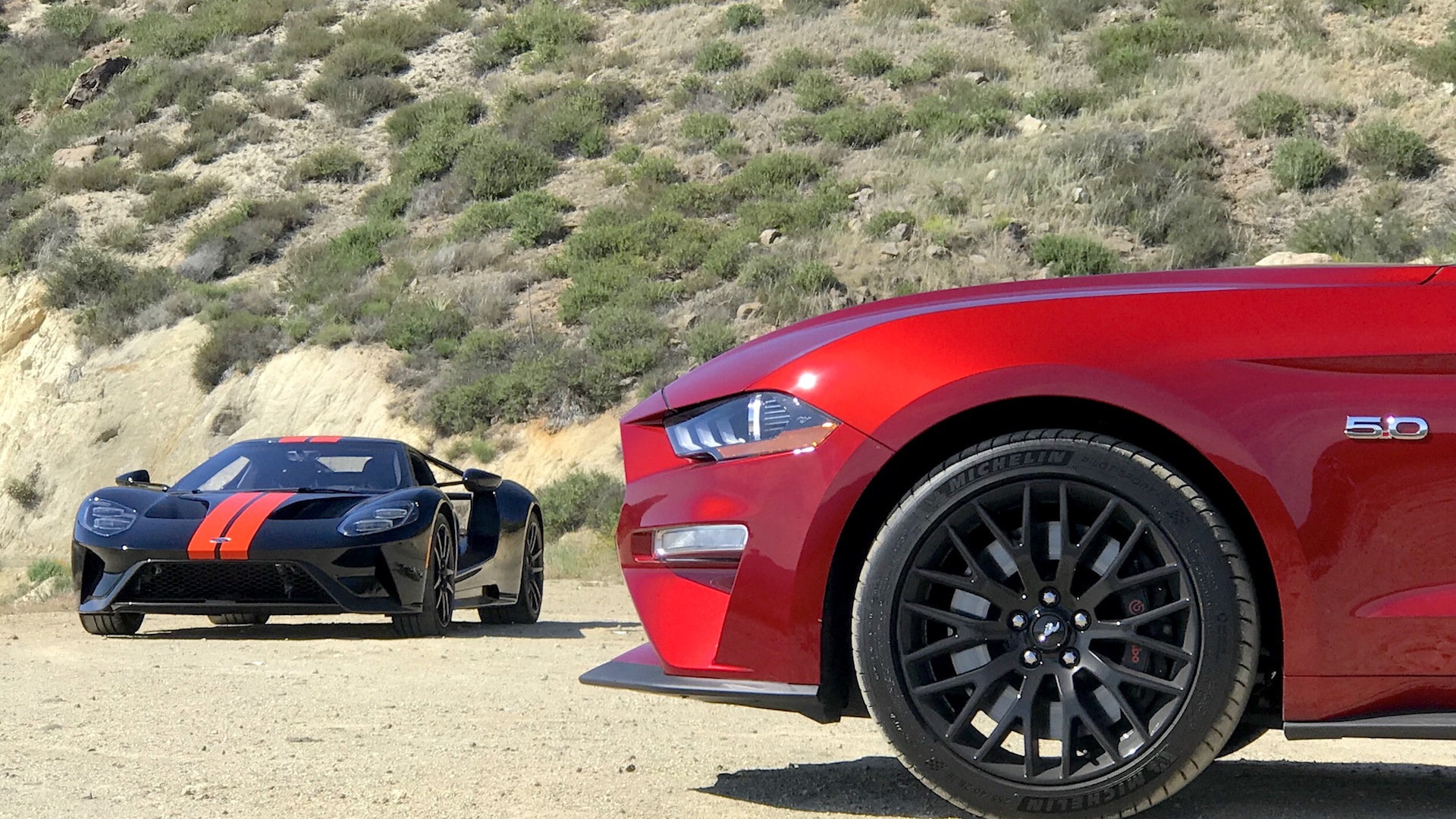 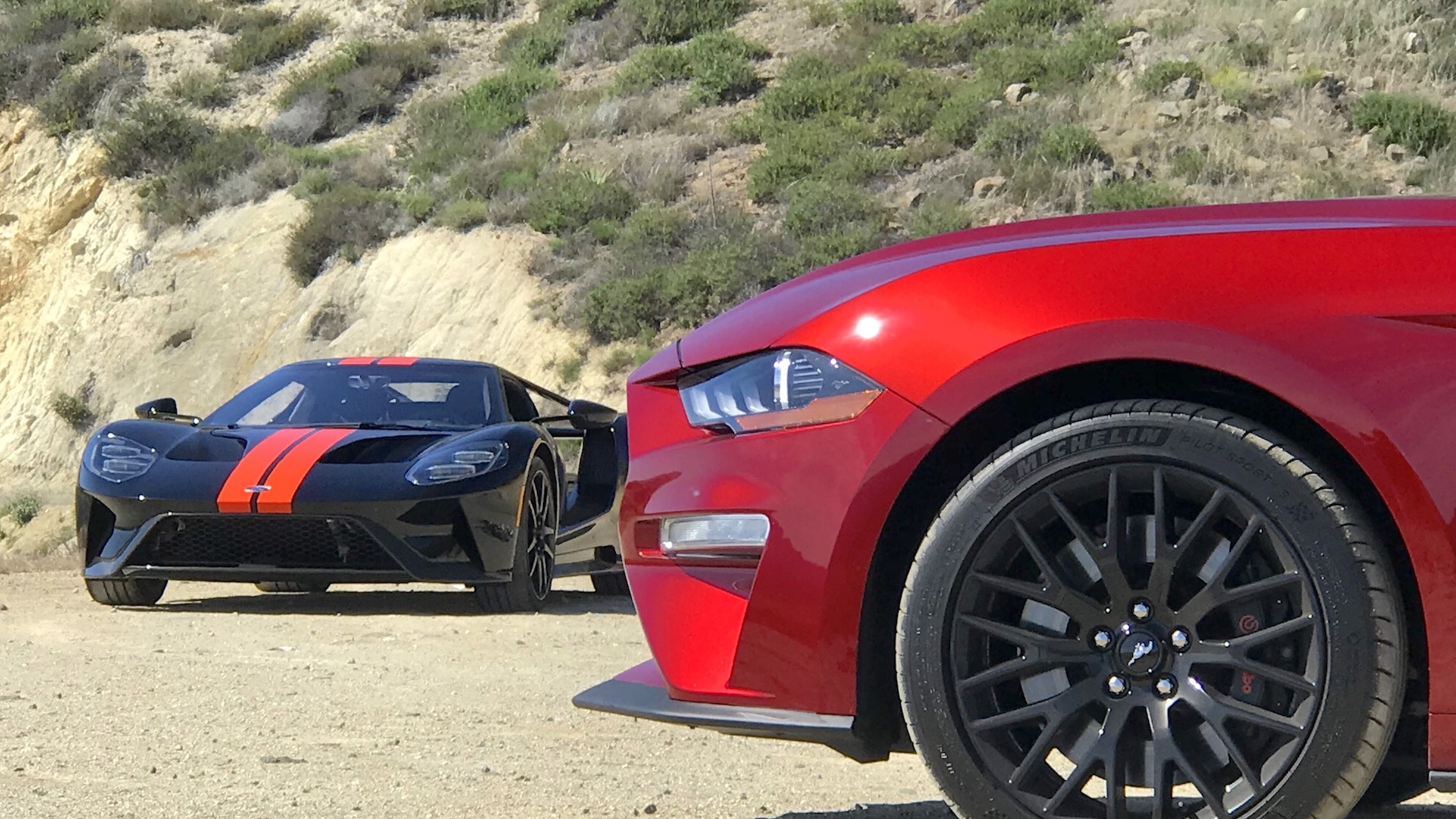 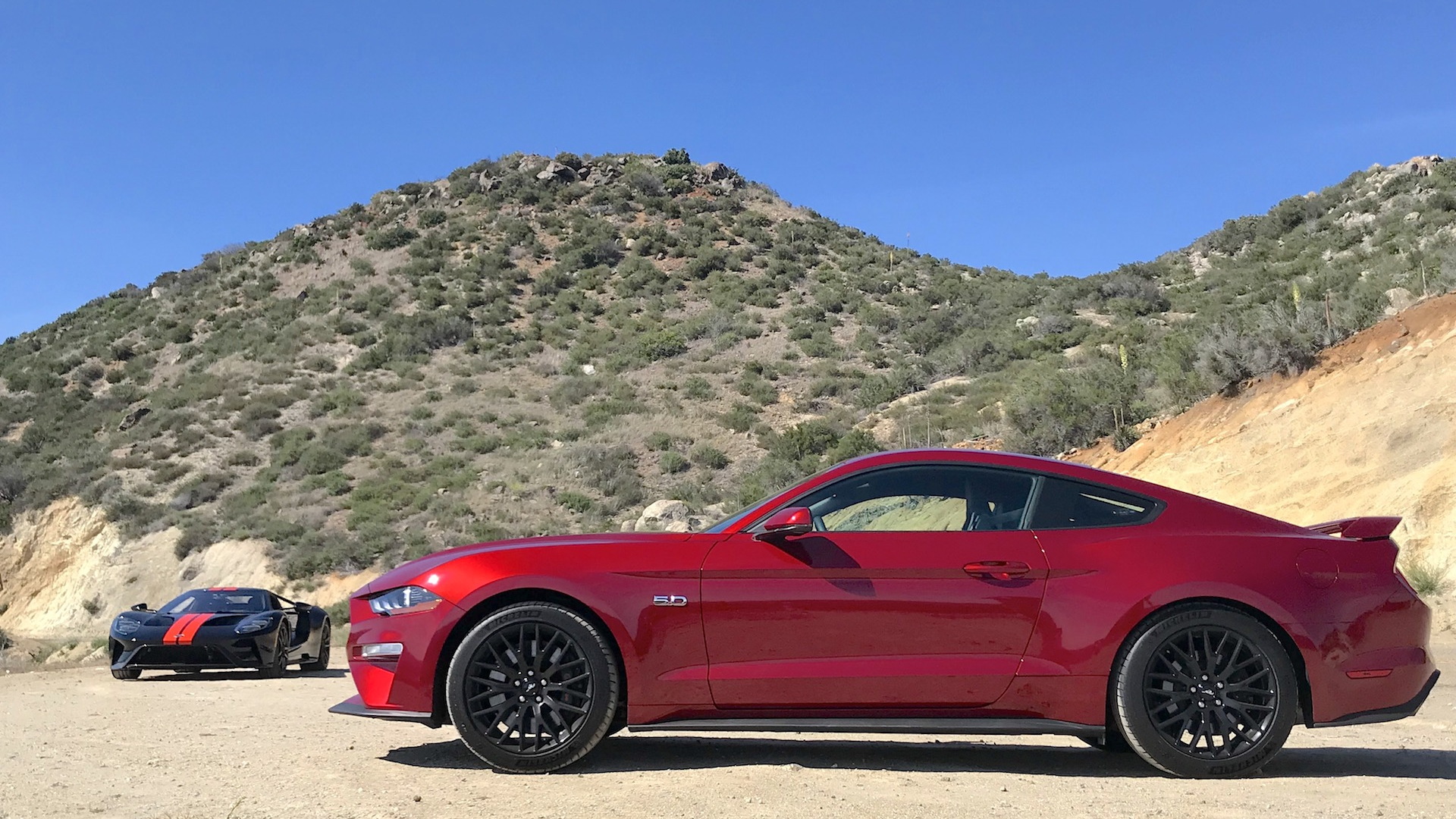 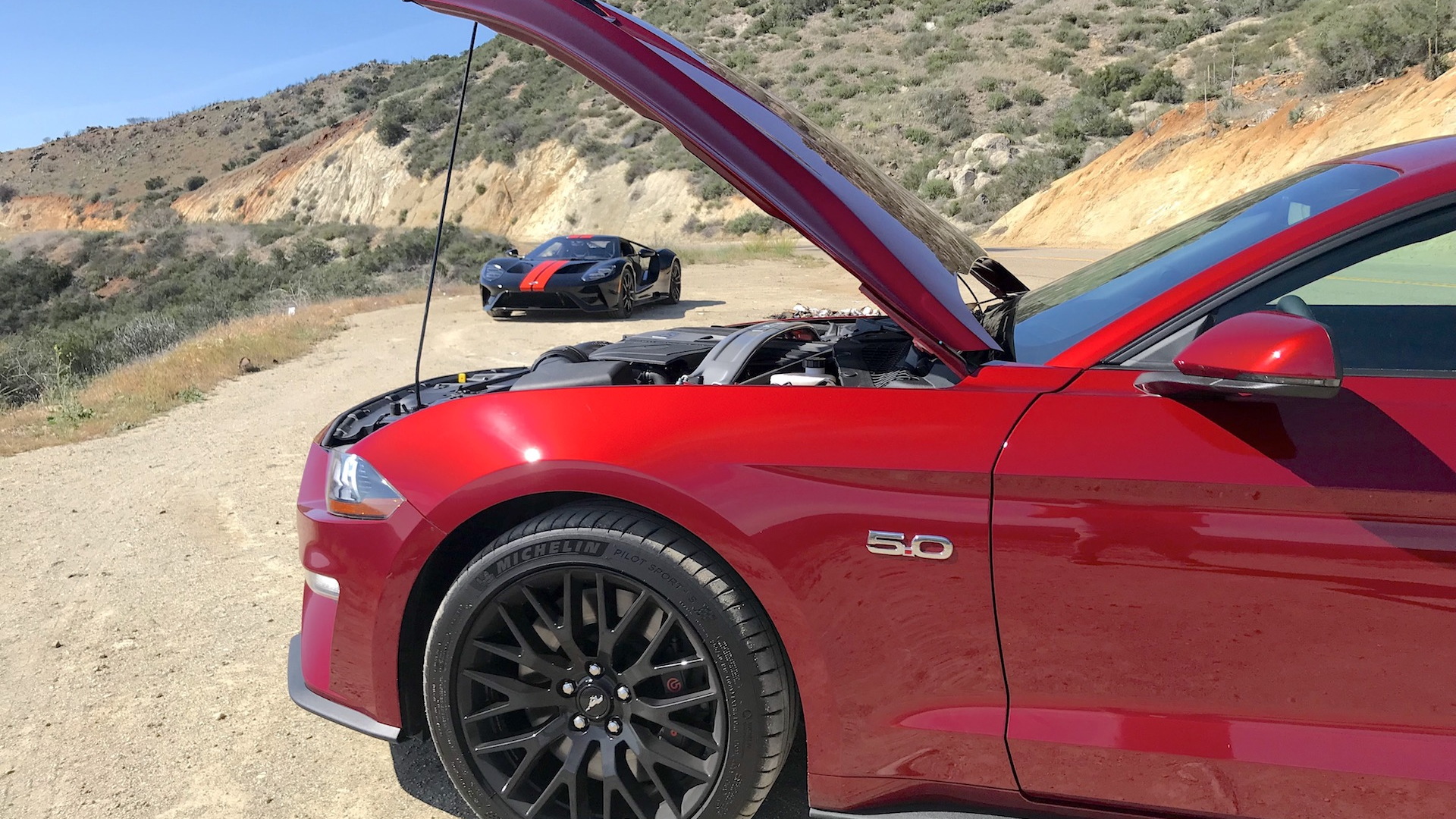 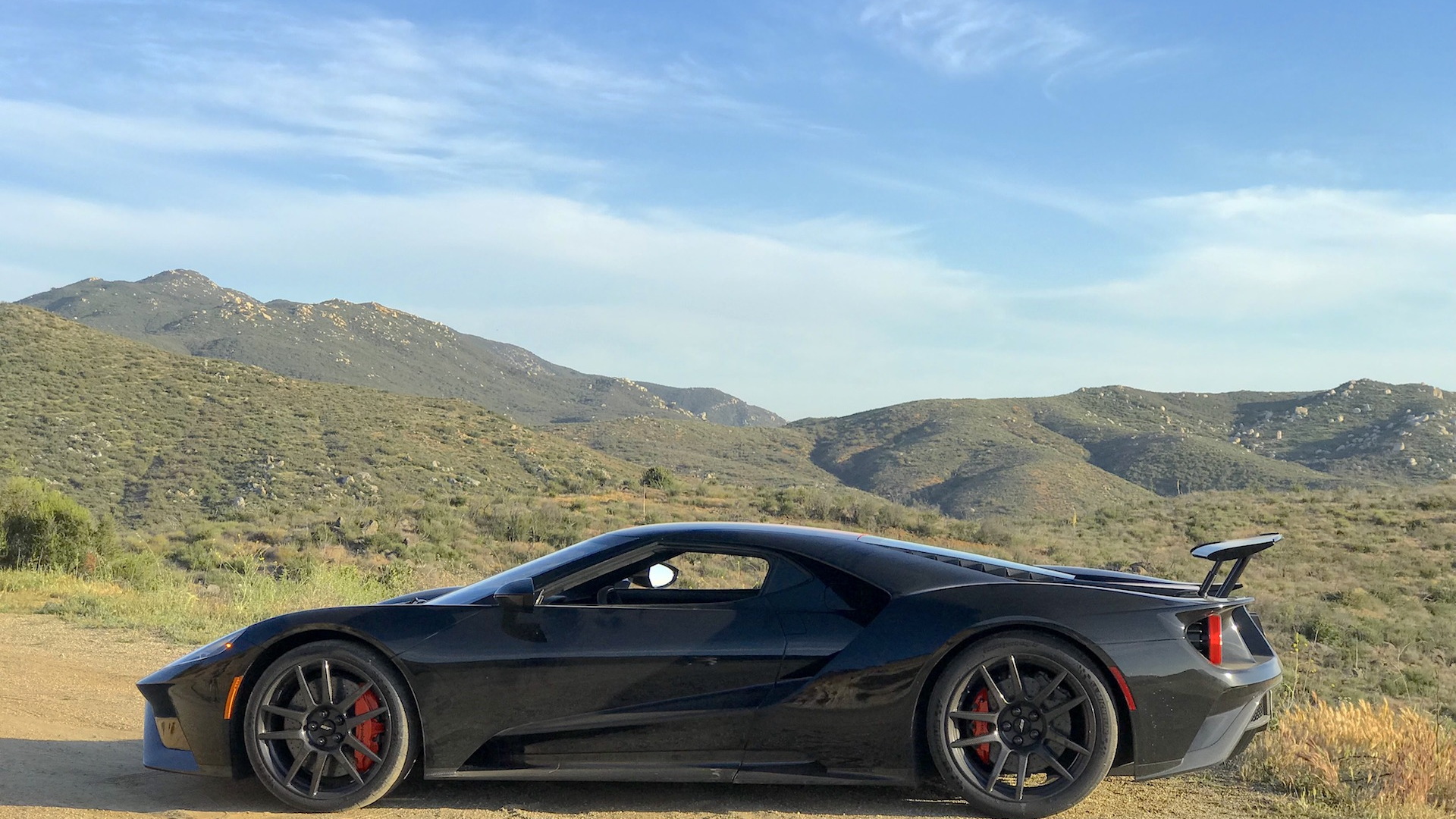 One’s a race car that wears almost no disguise. The other is an American icon.

They’re both Fords, and they’re both GTs. But as you might guess, there’s just a little bit of a difference between the Ford GT supercar and the Ford Mustang GT.

We traveled to California to take both for a back-to-back thrill ride.

Let’s take a way-back trip with the Ford GT first. The GT—namely the GT40—roared out of Carroll Shelby’s skunkworks and claimed the 1966 24 Hours of Le Mans podium (Eds note: All of it) and raced into folklore. The Shelby-engineered cars finished 1-2-3 and drubbed Ferrari.

Ford revived the GT briefly in 2004 with a retro-styled, mid-engine supercar. In 2016, the Blue Oval did it again with a mid-engine demon built with racing and the 50th anniversary of that 1-2-3 finish in mind.

The current GT sports supercar and race car credentials inside and out. It’s built around a carbon-fiber tub. Most of the body panels are carbon fiber, too. The jet-inspired body has active aerodynamics in front and in back. That rear wing raises and lowers, and it helps the car stop when it becomes an airbrake.

Ford stuffs a twin-turbo 3.5-liter V-6 behind the driver. It’s worth 647 horsepower and 550 pound-feet of torque, but it doesn’t make the most alluring sounds. It wails, it huffs, it drones. It also shreds tire treads, dispatches 0-60 mph runs in less than three seconds, and rockets the GT to a top speed of 216 mph.

A touch of turbo lag caused by huge turbos prevents the GT from roasting its tires from a stop. Flip it into Sport or Track mode, and it kicks in a race-bred anti-lag system that keeps the turbos spinning even when the driver is off the throttle. That creates a right-now reactions from the throttle pedal once underway, and the car eats vast swaths of pavement in precious little time.

Thrilling acceleration meets unbelievably flat handling in the GT, and the car reacts to driver inputs with a suddenness you won’t find even in other supercars. Its inboard suspension gets adjustable dampers and a dual-spring setup at each corner to give it a taut ride. A Comfort setting in the Normal mode makes it a tad more livable, but this is no Sunday cruiser.

Flip it to Track, and that suddenness shows its face again. Hydraulics lower the GT 2.0 inches to just 2.75 inches off the ground, and it happens in the blink of an eye with a “pshhht” sound. It’s based on a race car, after all, when there isn’t time to wait for the slow air suspensions or even hydraulic systems of most other luxury cars or supercars.

Now the handling is even more precise. The GT darts from apex to apex. Not only does it corner flat, that low ride height barely allows any lean. The old-school hydraulic steering provides welcome feedback as it works with the huge tires to generate more grip than any driver can use up on public roads—unless that road happens to be the Nürburgring.

The GT is a special car that feels special from behind the wheel, and it begs to be driven fast and hard. To haul it down from the speeds it was built to achieve, Ford outfits it with massive carbon ceramic brakes that, again, feel sudden. The brake pedal is high and braking power is stunning, aided at high speeds by that rear airbrake.

It may feel special, but the GT’s interior is less luxury and more race-car spartan. In fact, it has almost no space, and driver comfort is not a priority.

The driver’s seat offers just two adjustments; the seatback tilts forward and back. To tailor a practical driving position, the pedal box moves in and out and the steering column tilts and telescopes. It works and the seat is supportive for performance driving, but it’s not all-day comfortable.

The rest of the cockpit is just as purpose-built. Open the doors and the carbon-fiber tub can be plainly seen; Ford doesn’t bother covering it to pretty things up. Ford also installs very little sound deadener, so the drone of the engine and the tires on pavement are constant companions. While the dash is wrapped, plenty of low-rent plastics show their plain faces. And total interior storage amounts to a glove-sized glove box that sits at the base of the driver’s seat.

The only nod to modern convenience is the standard Sync 3 touchscreen infotainment system, complete with Bluetooth, navigation, and access to apps.

Loud, impractical, and impossible to live with every day, the Ford GT also has the race-car goods to make for a once-in-a-lifetime drive.

So what about the Mustang GT?

No shock here: It’s the everyday driver the GT could never be. It makes the powertrain noises we wish the GT supercar had, and a sticker that’s one-tenth of the cost of its supercar brother.

The Mustang’s GT package was new in 1965. It cost $165 and added disc brakes, driving lights, gauges, and GT40-inspired racing stripes. Since then, it’s morphed into a muscular grand tourer with big horsepower—if not as big as you get in the Shelby GT350 and GT500.

History hasn’t left the Mustang GT behind. If anything, the Mustang’s left history behind. The live axle? Gone. Single-digit fuel economy? That’s in the past, too.

These days, the Mustang GT sports Ford’s fantastic 5.0-liter V-8. It boasts 460 hp and 420 lb-ft of torque and comes with either a 6-speed manual or a new 10-speed automatic. We’d stick with the stick: the 10-speed isn’t tuned as well as we’d hoped, while the manual slots into gears with satisfying metallic action. In peak performance mode, Ford says it’s good for a 0-60 mph time of less than four seconds.

If you haven’t driven a Mustang GT lately, be prepared for fantastic handling, at least as long as the last car you drove wasn’t the Ford GT. The Mustang GT now offers adaptive shocks that let it cushion the worst roads, or dial in firm, direct handling on back roads as great as we found in Southern California. It’s agile, capable, and composed, and with Performance Pack 1 or 2, the handling has taken a quantum leap compared to the old live-axle Mustangs.

Compared to the Ford GT, however, it’s not a fair fight. Move from the GT to the Mustang and you feel like you’re sitting three feet higher, driving a car a thousand pounds heavier, and leaning far more into corners. It’s a matter of perspective. The Mustang GT can’t compete with a street-ready Le Mans race car for handling prowess, but it’s a joy to drive and with Performance Pack 2, it plants itself well into sports-car territory.

The Mustang has some distinct advantages over the GT, too. It offers automatic smokey-burnout control. The Mustang GT’s electronic line lock lets any driver lay down a perfect pair of black rubber comet trails. It’s a car with hilarious levels of performance for the price.

The other advantages are in comfort and livability. The ride is far more supple, and that makes it a viable choice as a daily driver.

The interior has room for four, though the backseat passenger won’t be happy unless they’re kids. The seats are all-day comfortable, interior storage is plentiful, and it has modern connectivity.

The Mustang GT may not be a supercar but for something near $40,000, it can deliver astronomical thrills. And of course, there’s always a Shelby GT350 or Bullitt to step up into.

Both the Ford GT and the Ford Mustang GT trace their roots back more than 50 years. Each represents the best Ford’s ever delivered to enthusiasts, whether they’re ready to spend tens or hundreds of thousands of dollars for unbridled American-badged performance.

The Mustang GT? It’s a rolling piece of Ford and American history. And thankfully, it no longer drives like a piece of history. This latest Mustang GT has BMW in its sights, and it pulls up impressively close.

This isn’t a compare, it’s a celebration. The future of performance cars looks very different today than it did a decade ago. With high-performance battery-powered supercars and even Mustang hybrids on the way, gas-powered muscle cars and supercars like these are bound to become more rare, and more special.

We hope there’s a place for both in the electrified future we envision where the rush of V-8 power and the thrill of a low-slung, Le Mans-style supercar never go out of style.