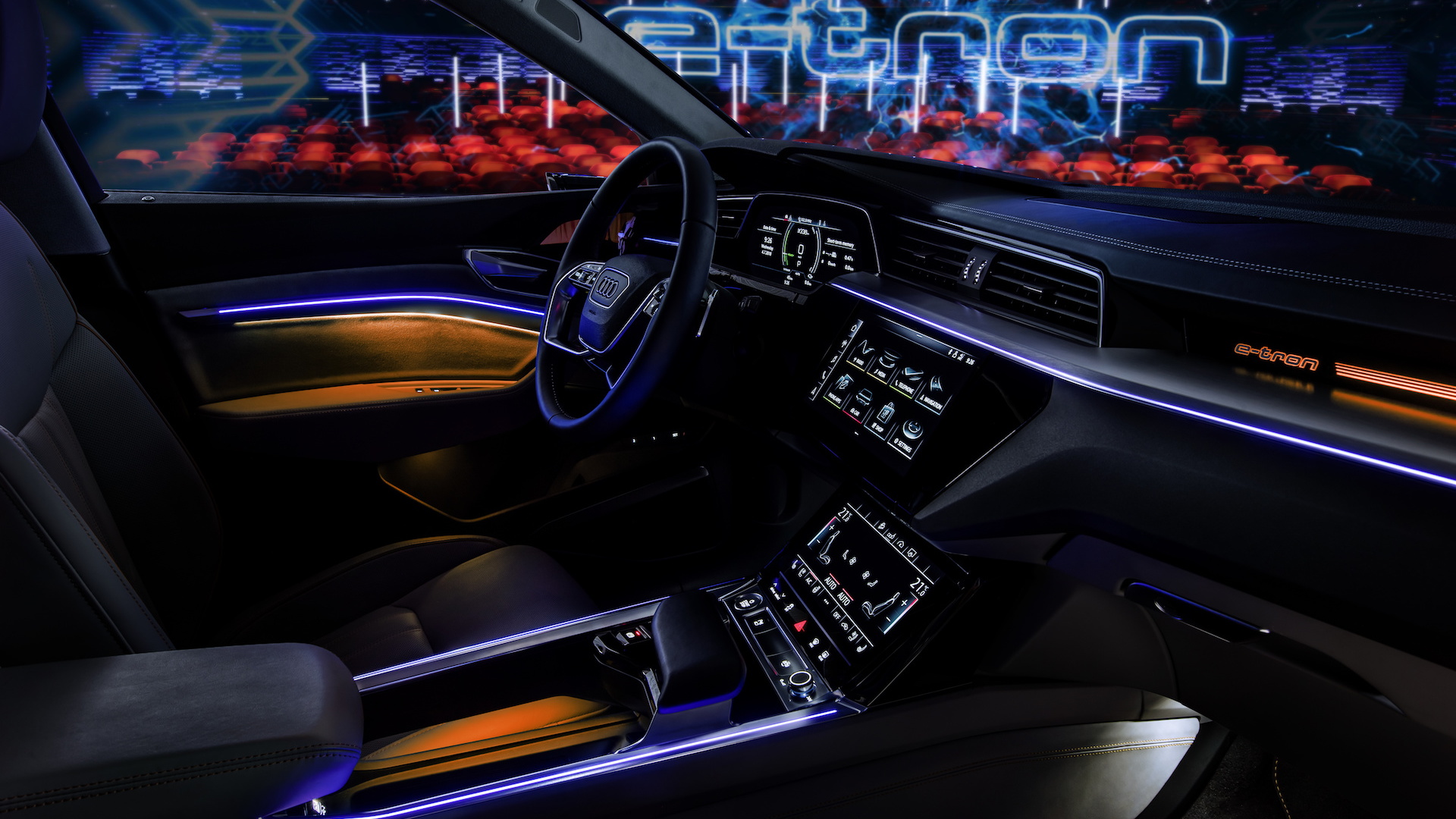 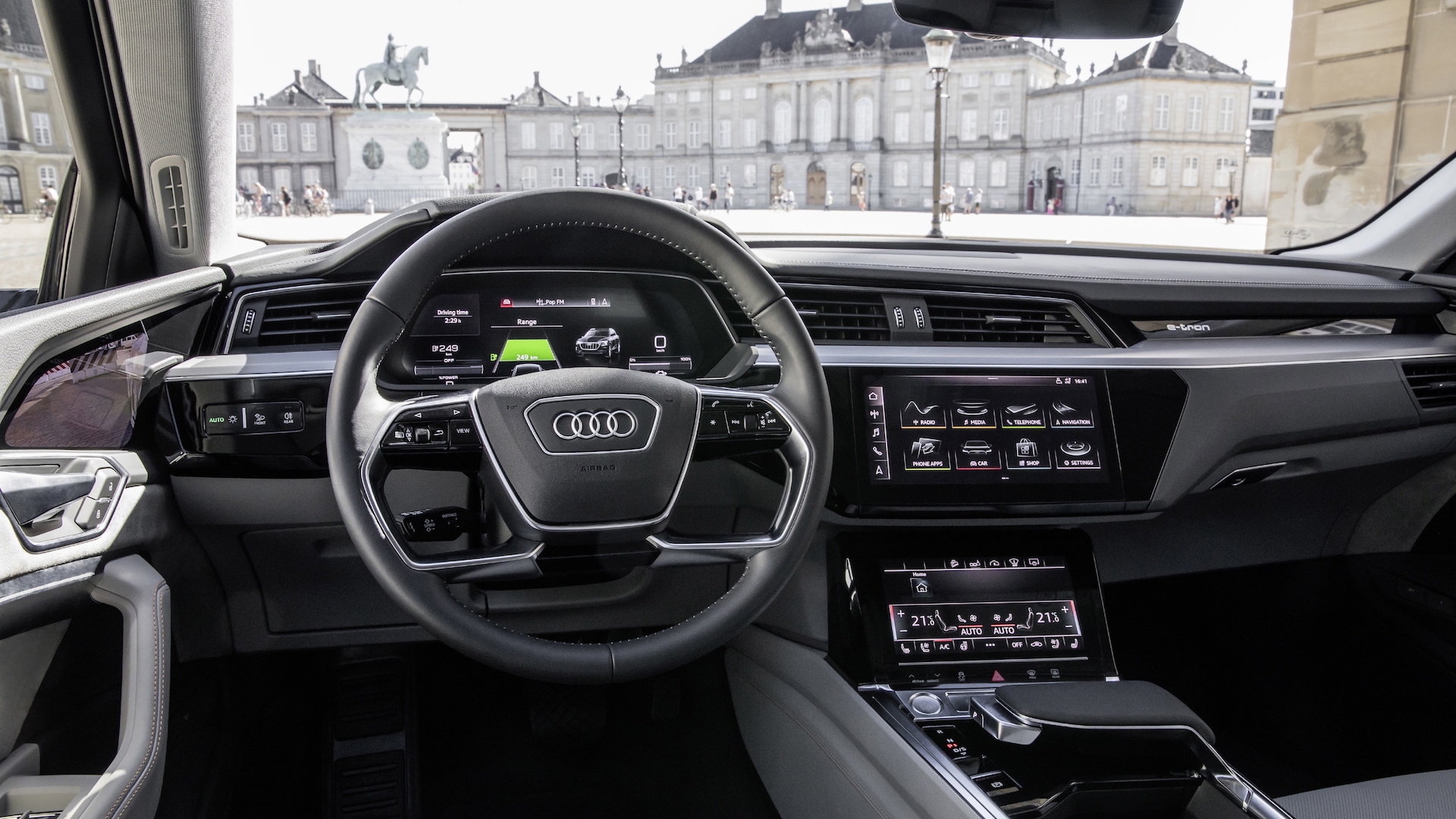 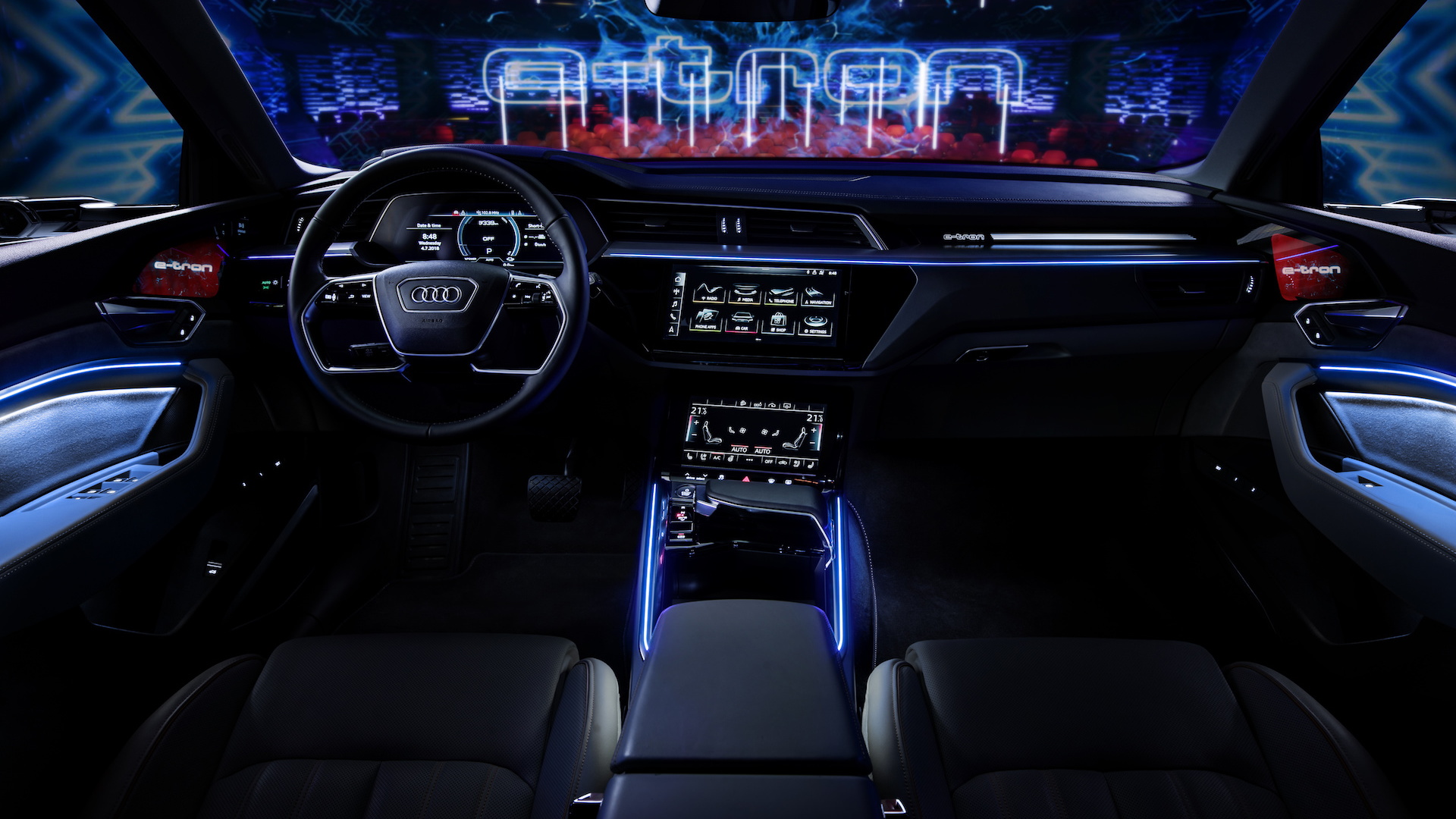 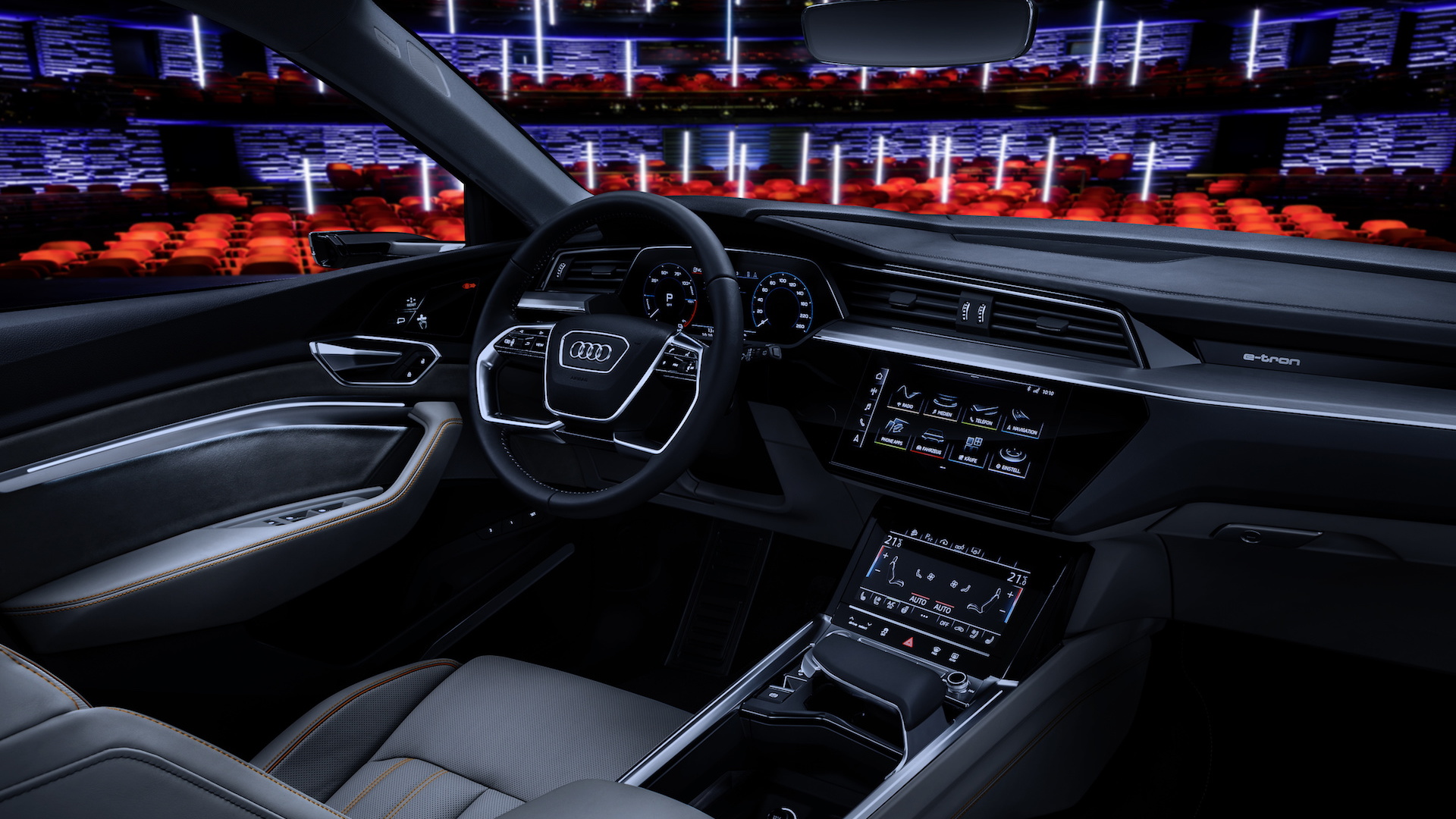 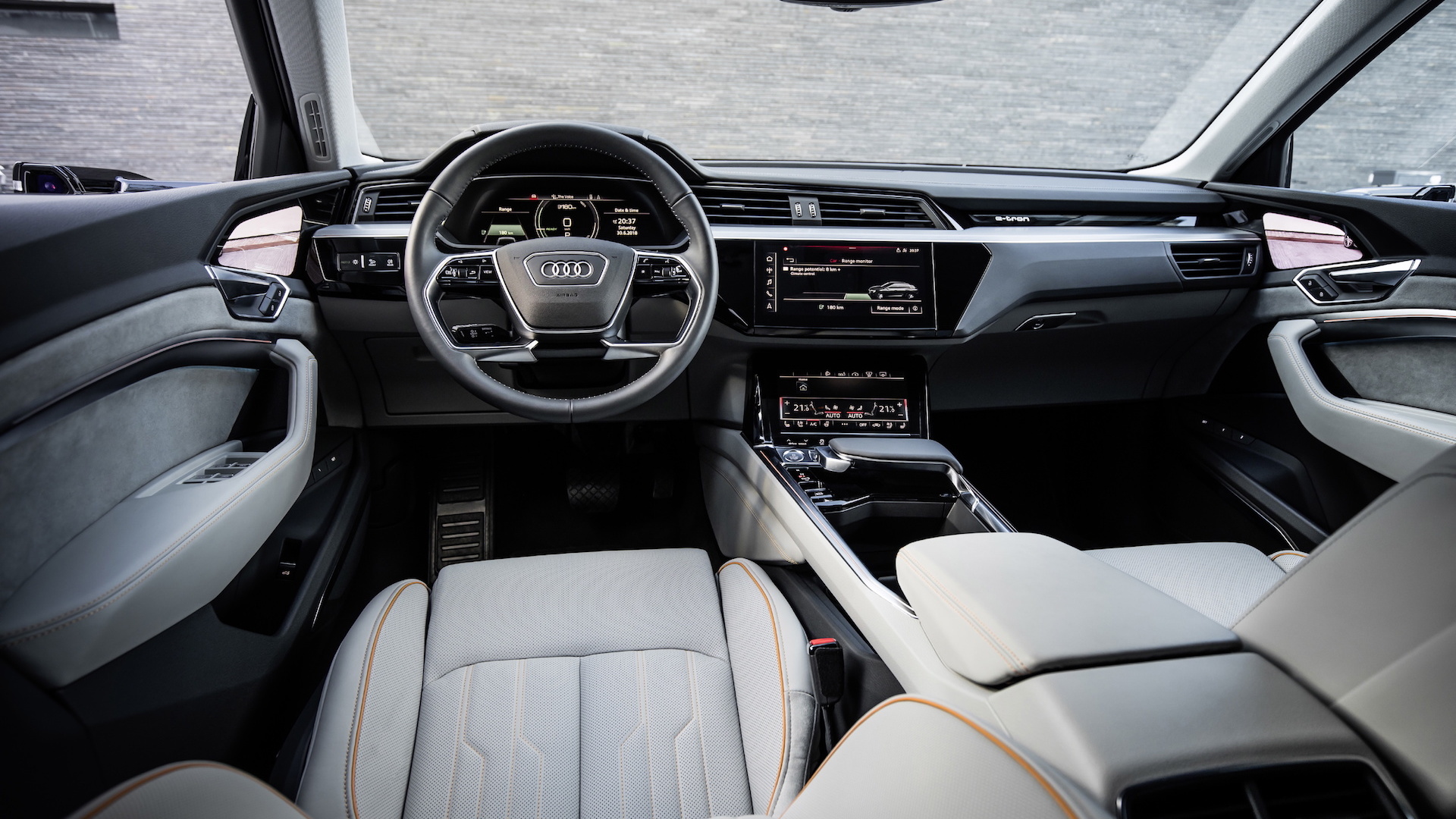 After delaying the debut of the e-tron electric SUV, Audi has revealed the first look at the model's interior. And it's properly futuristic.

Audi's typical interior design language remains on display, but it's clear the electric SUV received a few unique pen strokes to set itself apart. Wedge-like shapes float around the cockpit, and dark photos show plenty of ambient lighting. The brand did say the e-tron badge on the dashboard will be backlit in the production vehicle, while the ambient lighting shown is optional. Audi is particularly proud of the center console. Without the mechanicals of a traditional internal-combustion engine and its transmission, the console uses open sides. Designers also molded the handrest for the gear selector to create a "floating" look.

One of the major headlines surrounding Audi's first electric car is the lack of traditional side mirrors. Instead, 7-inch OLED displays will showcase the surroundings. However, the U.S.-spec e-tron won't benefit from the new technology, thanks to current laws. An Audi spokesperson told Motor Authority in a June report that "the digital mirrors are not able to be homologated for the U.S. given the current laws at this time." Audi is working with authorities to make the camera-as-mirror tech legal in the near future.

The gallery of images shows the 7-inch displays for the camera mirrors are embedded above the door handles in another wedge-like shape. It's different, and a view we imagine would take some getting used to compared to traditional mirrors.

Audi's new MMI Touch Response system from the 2019 A8 and 2019 A7 means the center stack lacks physical buttons. It features two large screens that handle most of the electric SUV's interior functions. The driver is treated to a massive information screen that shows range, speed, and more in Audi's Virtual Cockpit. These are the latest features in Audi's tech arsenal. In all, the cockpit's design teeters on futurism without going too over the top. But, it certainly isn't minimalistic like a Tesla. The e-tron will be the brand's first mass-market electric car, and the design should appeal to a wide array of buyers.

As for materials, Audi has curated a combination of leather and brushed aluminum to blend sporting ideals with luxury. As is always the case in a luxury vehicle, the devil is in the details; Audi said the seat stitching is meant to recall an electric circuit board, and optional orange piping is meant to mimic high-voltage electrical systems.

The brand didn't provide any interior specifications but did say drivers and passengers will be treated to segment-leading figures in terms of space.

The e-tron will likely feature a 250-mile estimated electric range, while a 150-kilowatt fast-charging system will provide an 80-percent charge in about 30 minutes. The electric SUV will also charge quicker than a Tesla at a Supercharger station.