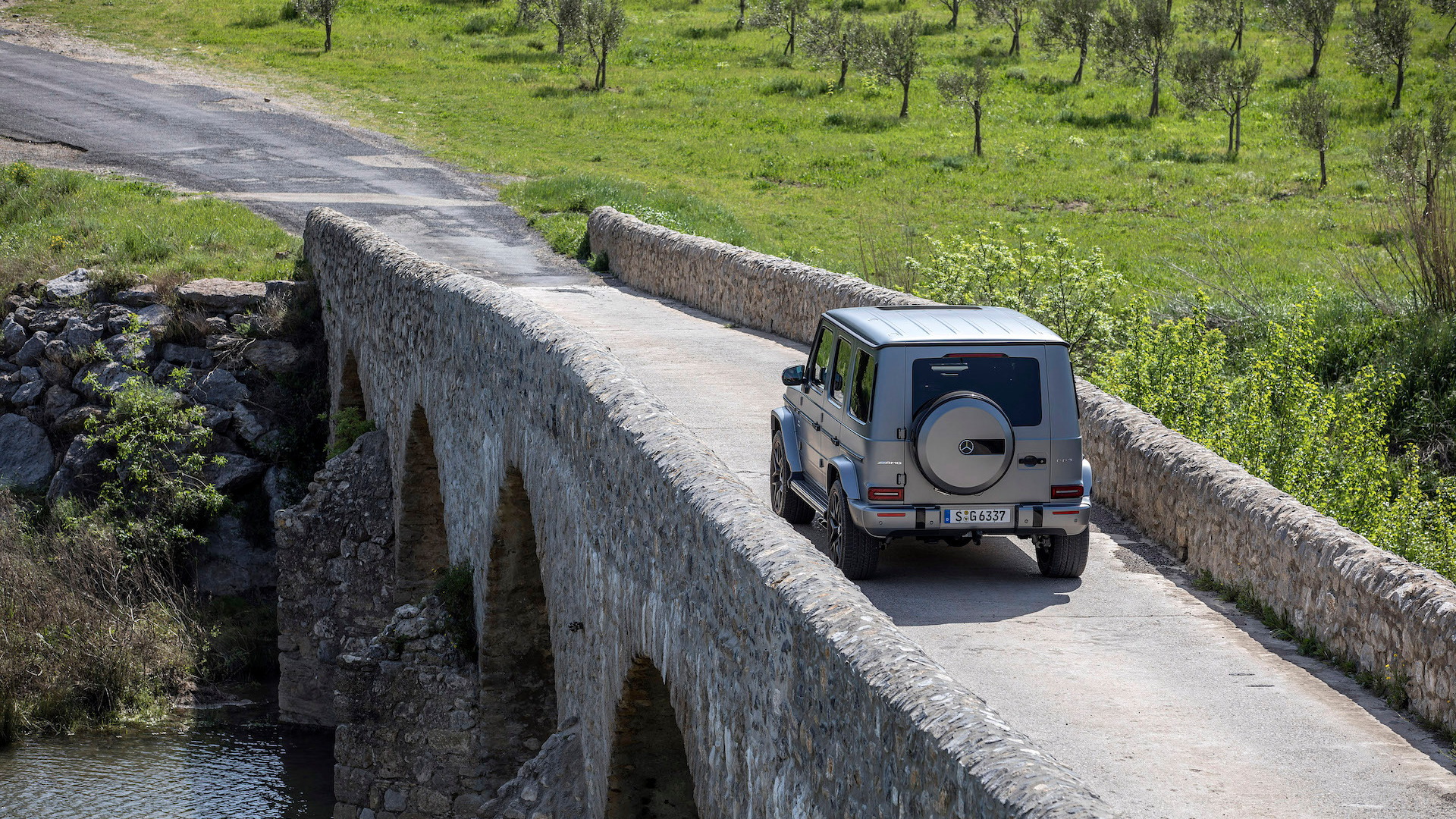 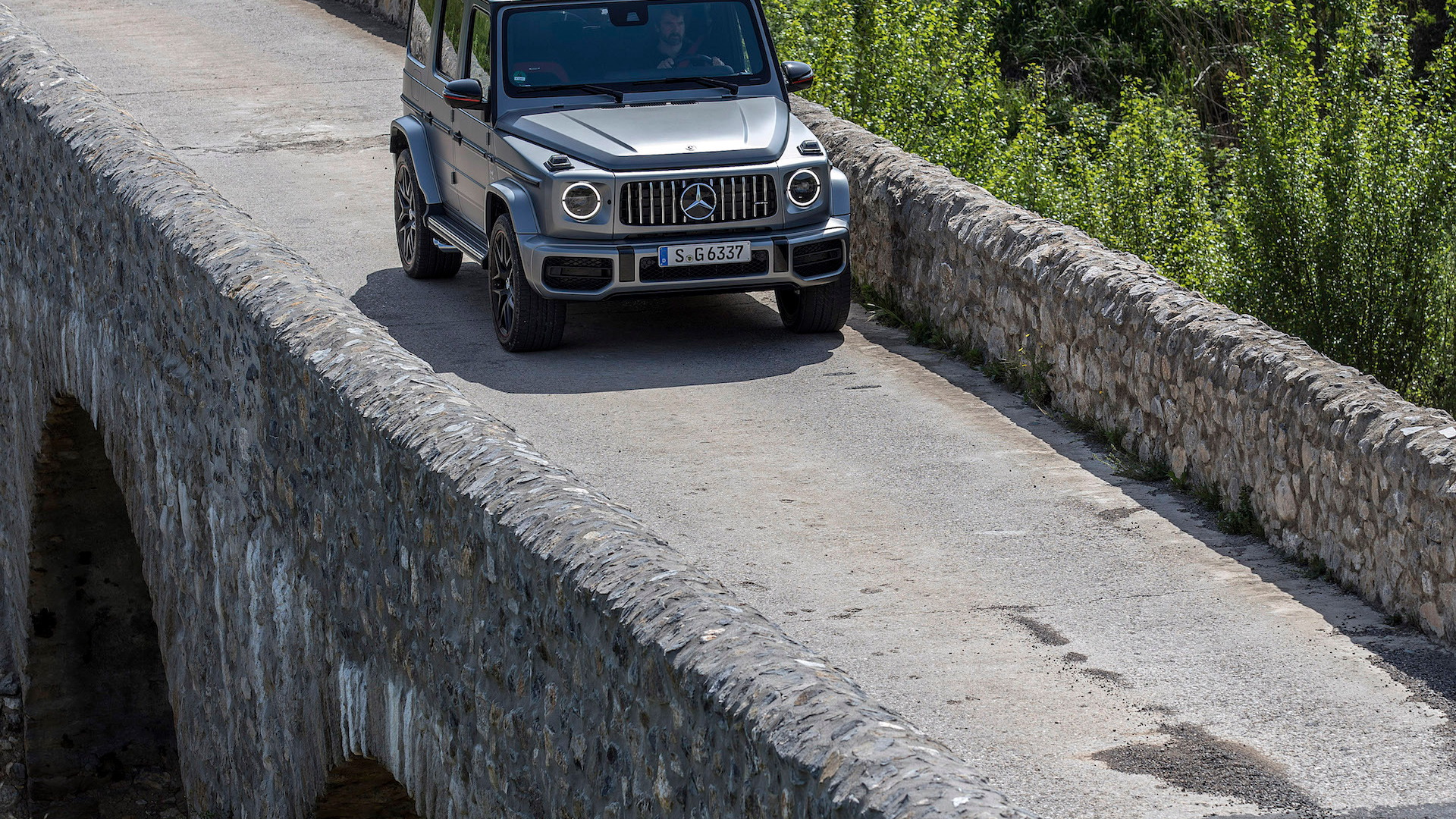 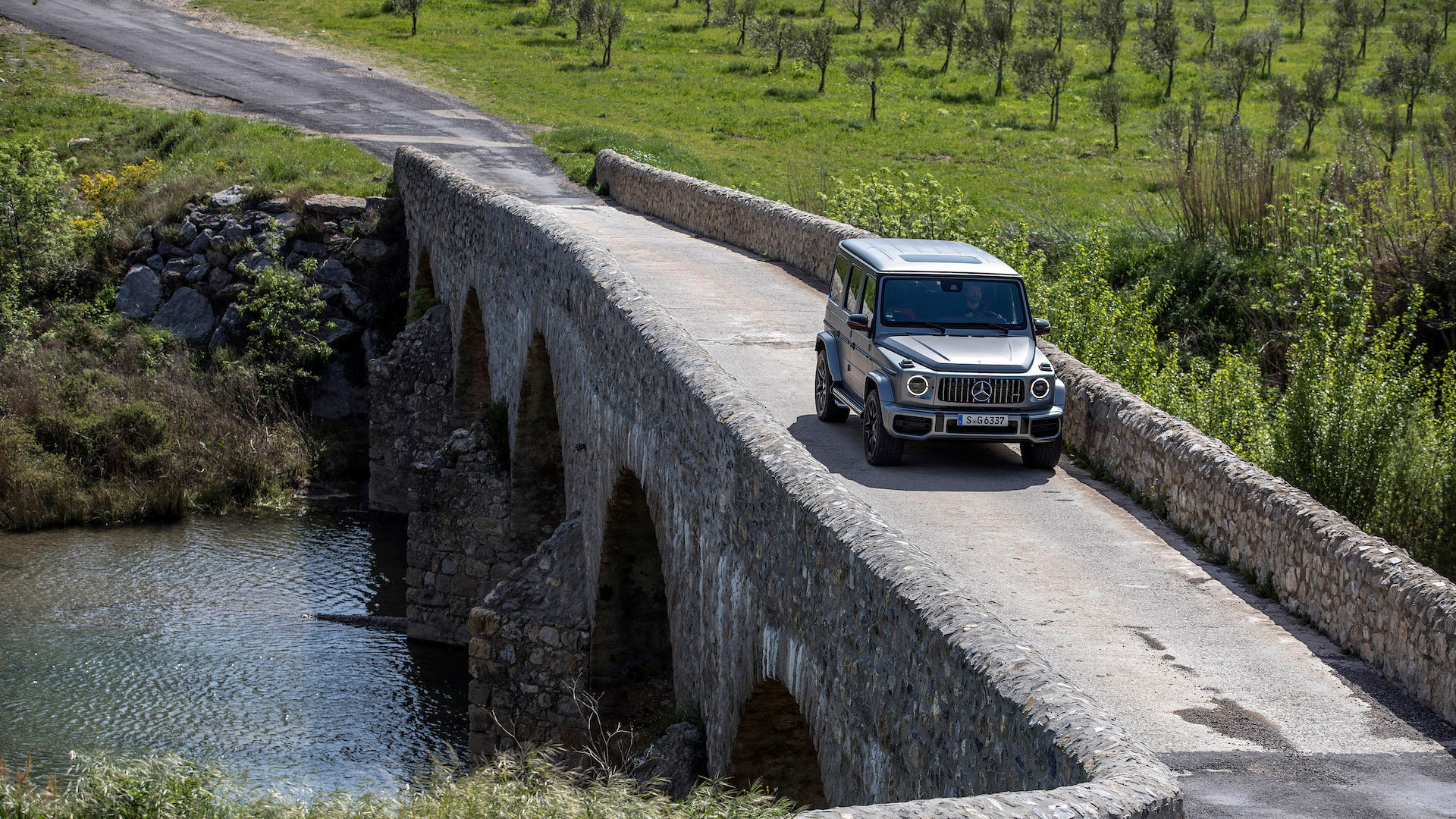 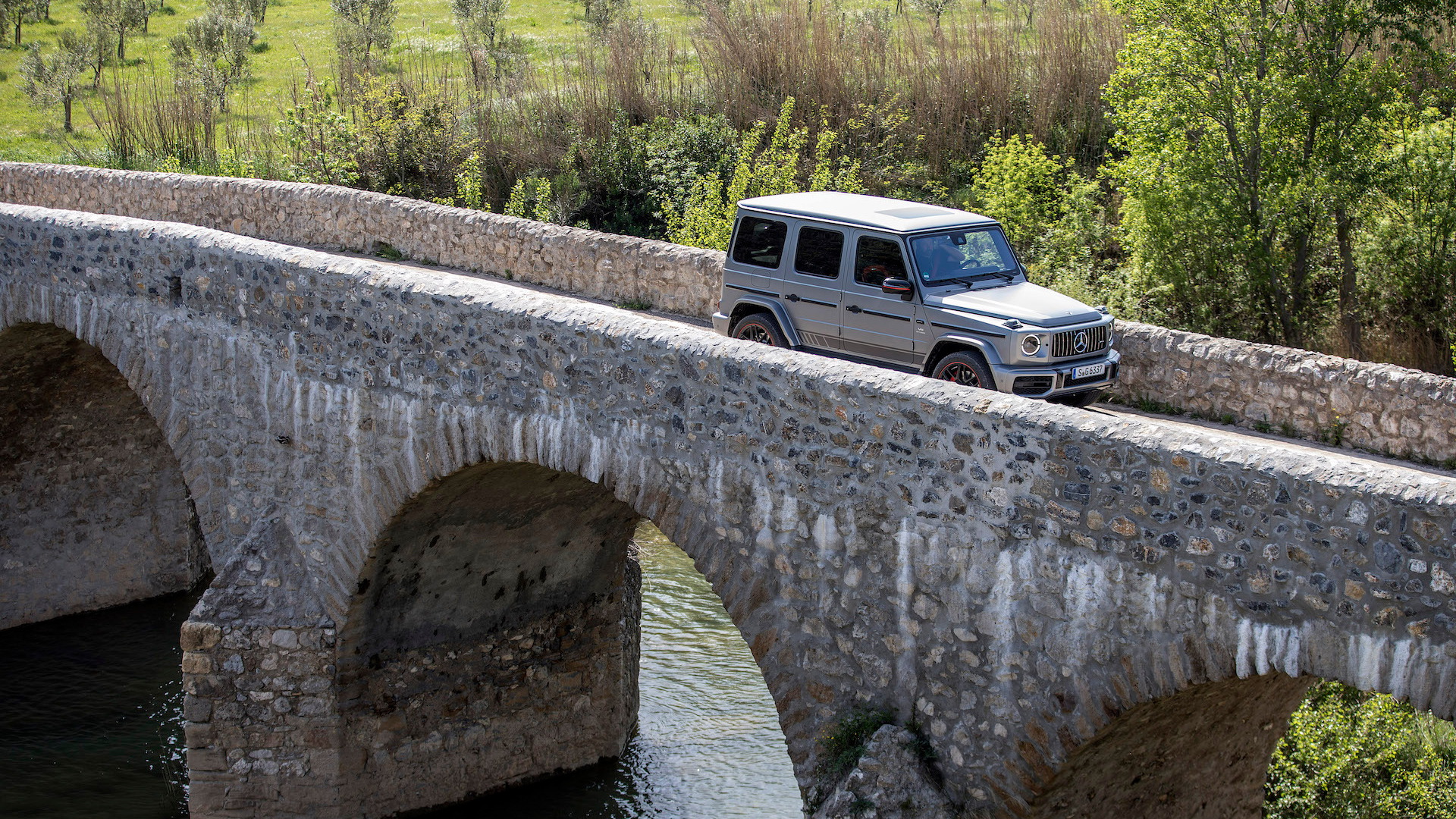 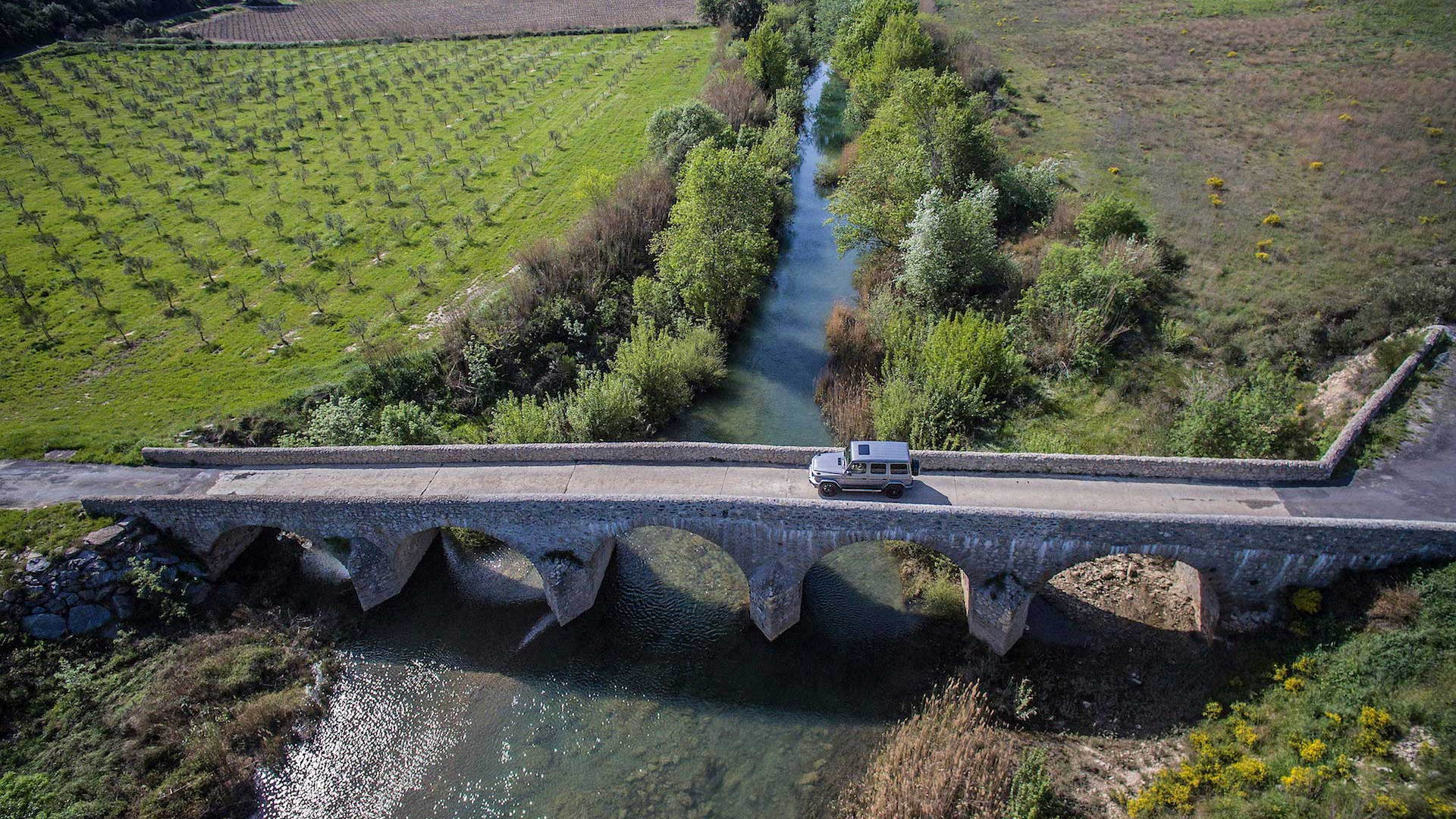 We’re far off charted roads, somewhere in France’s L’Occitanie region, on some family estate where wine and off-roading are baronial hobbies, when I first take a peek in the rearview mirror.

As I crash a 2019 Mercedes-AMG G63 through trashcan-sized holes and muddy slip-n-slides for a good 10 minutes at AMG-appropriate speeds, I see something trapped in a spiderweb of belts and handles.

Behind me, my co-driver has each limb hooked on a headrest or braced against a panel. He tries to stabilize himself as we careen—at our AMG driving instructor’s request—over rocky trails that would challenge a burro’s sense of self-worth.

You doing OK back there?

I’m fine, he says, which is not true, but is kind to say anyway.

I lift a few fingers on my left hand and shut all the windows, because I’m a people person. It’s time to slam into two and a half feet of muddy water. Nothing makes a G-Class look better than a fresh coat of mud. My co-driver might not come through it so pretty.

This is how one rolls in the Merovingian hamlet of Carcassonne, France. Climb in, buckle up, dig in a trio of locking differentials, and find out what makes the new G-Class a better G-Class all around.

A typical car gets redesigned every few years. The 2019 Mercedes-Benz G-Class is not a typical car. Not by a long shot.

The Gelaendewagen made its debut in the year President Jimmy Carter wore a tour jacket given to him by the Bee Gees. It’s been mostly the same since then. The G-Wagen, not the White House.

For the first time since 1979, the G-Class wears all-new sheetmetal. Don’t worry, it’s not just you. It’s not easy to spot from the old one, and that’s something to cheer. The lines are a little cleaner, but how do you make it more angular? Correct, you can’t, and don’t. The new G-Class has all its boxy charm intact, from the upright windshield to the rub strips down the doors, to the exposed hinges and the spare tire carrier in back.

The 21st-century flourishes are discreet: tighter body panels, better integrated cladding, siped high-mounted driving lamps to guide a line of sight off-road and to refract LED lighting so pedestrians are visible and not blinded.

It’s still a flying brick, no matter what aero tricks have been deployed. The 2019 G-Class’ 0.55 drag coefficient would nourish a whole season of RuPaul’s "Drag Race." The letdown: this G’s a four-door only, no cabriolets, no landaulets, no two-doors, no 6x6s. Not yet, anyway.

The cockpit’s learned some high-tech moves, however. A widescreen digital display takes the place of gauges, while a second screen blends in to turn the dash into something straight out of the USS Enterprise. Take your pick of brushed metal or carbon fiber woven with red, or even open-pore walnut wood trim: you can mix it all up inside the G-Class depending on the fording ability of your wallet.

The striking contrast is driven home to me on the second day of our drive, as I peek into the cathedral of Saint-Nazaire. It’s a G-Class, I think, a mix of impervious Romanesque strength outside and light Gothic froth inside. Having successfully wed my art history degree with a first drive for the first time ever, I decide cold medicine is in order.

G-Class performance begins at the contact patch, not necessarily under the hood. The G’s extravagant off-road hardware gives it credibility that parallels the S-Class’ luxury standing.

The 2019 G-Class sports a stronger ladder frame, a huge tower brace that straps across the front suspension, and a Panhard rod that reinforces the rear axle. Though the G-Class loses its solid front axle and gains an independent front suspension, its off-road abilities have grown more impressive.

Each one gets four-wheel drive, three locking differentials, and 9.5 inches of ground clearance between the axles and at the rear differential, which proves useful as we needle through a wind farm at the top of a hill in a part of France closer to Barcelona than to Paris.

There’s a new, dedicated off-pavement G Mode on the G550. Really four modes, G mode engages when any differential locks or when Low range activates (its crawl ratio is down to a smart 2.93). In G mode, the 2019 G550 alters damping, steering, and throttle uptake to permit more careful and more precise inputs. No one wants or needs an upshift, or a zap of throttle when descending a hill.

DID YOU MISS IT? Last chance to buy an original G-Class

On the AMG G63, the off-road mode expands to a trio: Sand, Trail, and Rock, which remap throttle, shift, and steering the help this beast cope better with its copious power.

The G-Class’ athletic specs can better the prior G. It can lean into angled paths at a 35-degree tilt. It’s blessed with 27.6 inches fording depth, breakover angle of 26 degrees, 30- and 31-degree front and rear departure angles.

The combination gives any G-Class the talent to wade through more than two feet of water, blast through mud bogs, paddle through sandy dunes, or crawl around on craggy rocks with a better, more planted feel than the taller, narrower O.G. It’s ludicrous, in a way, that the more complex the G-Class gets, the easier it is to point and shoot off-road. That scrapey boulder erupting from a 30-degree bank to the right? You can see it, aim at it, set all three locks and choose Low, and keep a light but steady foot on the gas.

We ran both the G550 and G63 through the most challenging traps. We even posted up on the medieval fortress walls at Carcassonne in formation and waited for someone to fling pox-ridden corpses at us. We waited...and nothing. Some people just don’t get how stagecraft works.

With a few more pounds of boost pressure, the AMG G63 guts out 577 horsepower and 627 lb-ft of torque. Pounce hard on the pedal and Benz says the G63 will rush to 60 mph in 4.4 seconds, on to a top speed as high as 149 mph, all the while gulping massive amounts of air to feed its turbochargers. That’s all in spite of a weight in the 5,700-pound range.

MORE: How Mercedes made the 2019 G-Class: Cue up the original, make it better

Another slight letdown, perhaps, is that the V-12 G-Class will not come back any time soon. A turbodiesel will, but the new inline-6 turbodiesel will be far off—if it comes at all—to the U.S.

On pavement, the 2019 G-Class benefits from a wider track, available adaptive shocks, and electric power steering that filters off the worst of its big, truck tendencies. Engineers looked at air springs but decided to stick with coils and dampers for ample suspension travel. (The adaptive dampers come standard with the G63 AMG).

On both G-Class SUVs, a wider track and a modern steering rack deliver a dramatic uptick in stability. Ride quality would be called creamy by anyone that’s driven a steel-suspended G-Class from any prior generation, like the charming but antediluvian 1989 fire truck on hand for comparison. The new G’s tires aren’t as massive as you’d find on some bruisers–265/60s on the G550, 275/50s on the G63–and as a result, the G doesn’t pound its passengers into submission, though we’re curious how the G63 on 22s will respond to grimy East Coast highways and their lax maintenance budgets.

Hydraulic steering is out; the G-Class’ steering’s gone electric across the board. Particularly on the G63, the steering’s been mapped with such strong centering force, it requires frequent correction, at least on France’s autoroute. Switch into G mode, and it’s all remapped again, with lots of on-center latitude.

Longer and wider than before, the G-Class has cavernous room inside for five people, and some charming dissonance in the way it’s upholstered, refined, and stitched.

The new G sits 2 inches longer and 2.5 inches wider than the last model, and has a much more rigid steel body with fenders, hood, and doors made out of aluminum. That’s great for structural stiffness, which gets offset by the G-Class’s extraordinary plush cockpit.

Seat by seat, the G-Class gets luxury right. Front seats get lots of good support and can be outfitted with multi-adjustable seats with massage functions as well as cooling and heating and bolsters that inflate on the go, for better support when you’re pistoning side-to-side off-road, scrabbling up rocky outcroppings.

The new G has 1.5 inches more leg room in front, and to go with it, vast gulps of head room and rear-seat space. Rear legroom is up 5.9 inches. The seats aren’t fabulous overstuffed chairs, and shouldn’t be. They split and fold out of the way, but there’s decent cargo space behind to never make that need arise.

Let’s pause for a minute on the head room, because it’s likely you’ve never been in a vehicle with this much. Bring a hat. Bring two hats. Bring the stilettos you only dare to wear at home. The G-Class is positively cathedral-like and since Carcassonne has one, I walked into its Romanesque-Gothic cathedral for comparison and, the church? Yes, head room, but kind of dim inside (plus it handles so much worse).

This new G also is radically quieter than the old G thanks to, well, a body structure 40 years newer. The package still is compromised in some big and small ways, versus an ordinary everyday GLS SUV. There’s leather everywhere and a high-class ambiance, but the G-Class’ doors don’t thunk shut like a vault—they slam like the hatch on a nuclear shelter. Very Cloverfield. The doors lock with a bolt-action rifle sound. The blocky shape goes through the air like a brick through a window. The spare tire swings away from the rear hatch, like we did in the...oh, coincidence, 1970s.

Finally, the cargo hold will hold a few roll-aboards. The 2019 G-Class isn’t much bigger than a four-door Wrangler, but it’s at least three times as expensive as one, with a base price sure to live above $125,000. Prestige has a price tag, one that’s discreetly tucked under the cushions.

Awe-inspiring space and outward vision couple with technology that bristles from every angle and corner of the new G. The rearview camera sits under the spare tire, liquid-proofed so it can render images when it sits below the waterline. Attention assist and active lane control come standard. A safety package bundles adaptive cruise control, blind-spot monitors, a surround-view camera system, active park assist, and rear side airbags. The surround-view camera system can toggle through views off-road, to grant a grand view of the rock that’s about to slit your tire’s sidewall. You’re welcome.

No EPA fuel economy ratings or pricing have been published, but last year’s G-Class started just below $125,000, with the AMG edition just below $150,000. Expect a similar starting point for both when it goes on sale late in 2018.

Options include a range of wheels, a second digital display, 20-inch wheels (or 22s on the G63), a second 12.3-inch dash-mounted screen, massaging front seats, a rear-seat entertainment system, a panoramic roof, a range of Exclusive and AMG Line interior trims, and adaptive dampers.

The G-Class offers all those state-of-the-art touches, but its most convincing touches aren’t new at all. It carries the day with its classically boxy shape, and its go-anywhere attitude. It keeps the spirit of 1979 alive, which is something you can’t say for a vintage Bee Gees tour jacket. Ask us how we know.

Mercedes-Benz provided travel and airfare to Internet Brands Automotive to bring you this firsthand report.