Sam Schmidt has changed my mind.

I’ve been opposed to most of these so-called driver-assistance features that automakers and government bureaucrats have been adding to our vehicles. While I really like having a rear-view camera on my vehicle, I dislike such things as lane-change technology that fights against — literally changes steering-system feedback parameters — if you attempt to move into a different lane of traffic without using a turn signal.

I’ve always felt such things were for people who had never bothered to learn how to drive, defensively or otherwise. But then Sam Schmidt was invited to give the keynote address at the breakfast that opened the recent SEMA Show of automotive aftermarket products.

In case you’re forgotten, Schmidt started three times at Indianapolis, won the IndyCar race at Las Vegas Motor Speedway in 1999, and was emerging as one of the sport’s young stars when his car smacked the wall at Walt Disney World Speedway on January 6, 2000, during a pre-season test session. 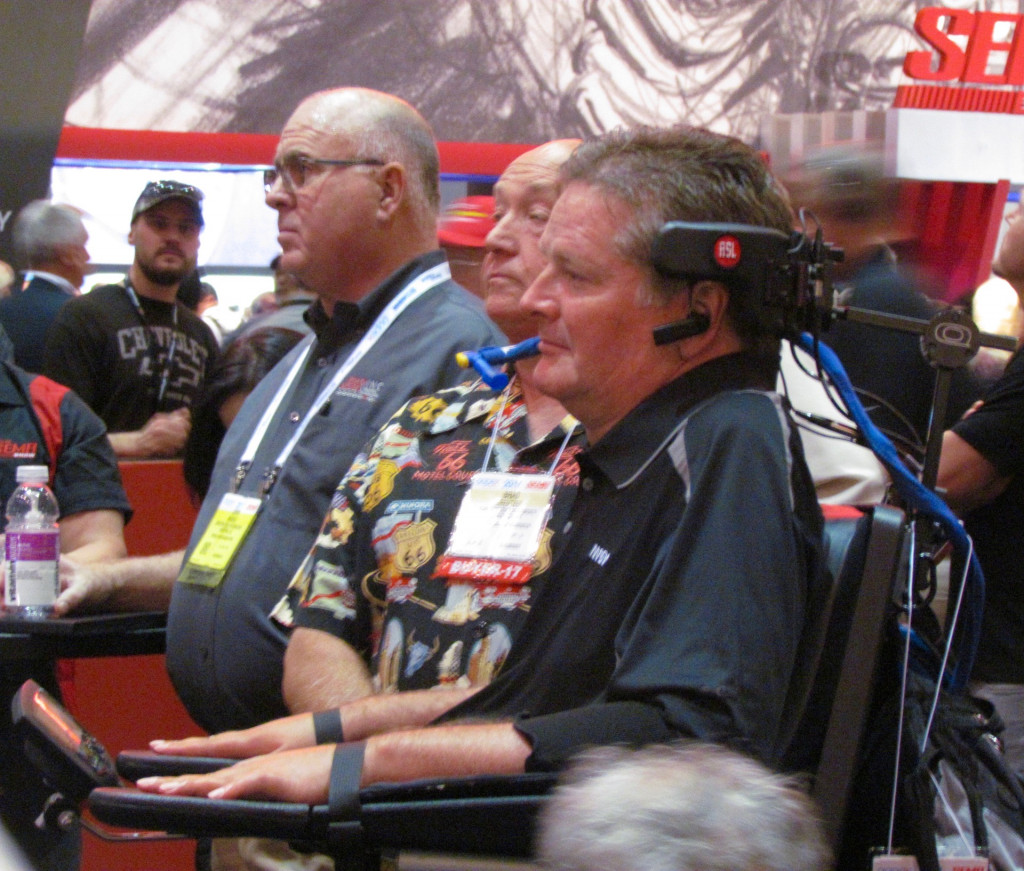 Schmidt’s car had been traveling at 200 mph when its trajectory was interrupted by concrete. His C3 and C4 vertebrae were, as he put it, “blasted apart.”

Not only would Schmidt face life as a quadriplegic, but a neurosurgeon told his wife, Shelia, that if he lived through the night, she should find a good nursing home because his life expectancy would be only 3 to 5 years, years he’d spend attached to a ventilator.

“That was 18 years ago,” Schmidt said, long-ago freed of the artificial breathing device, though still in a wheelchair he controls with head movements.

Though still using the chair, Schmidt no longer is bound to it. He is the first person to receive a semi-autonomous driver’s license, has driven around the Indianapolis Motor Speedway at 152 mph — still a racer concerned about every mile per hour, he makes a point of saying “one-hundred fifty-two” — has driven his specially equipped Chevrolet Corvette up Pikes Peak and, most significant of all to Schmidt, has driven with his wife in the passenger’s seat across the Golden Gate Bridge.

I don’t know about you, but I need a short break here to wipe tears from my eyes.

Schmidt has been able to get back into the driver’s seat in part because of his own determination — inspired by his father, also a racer who crashed during an off-road race in Mexico, lost the use of the right side of his body but fought back to the point that he regained use of everything but his right arm.

“Dad inspired me to get on with my life, giving up was not an option,” said Schmidt, who in addition to racing has a business degree and an MBA in international finance from Pepperdine University, been a hospital administrator, owned several businesses — including his racing teams — and founded the Conquer Paralysis Now as a global project of the Sam Schmidt Foundation.

The other part of Schmidt’s driving comes from a Denver-based electronics company called Arrow. 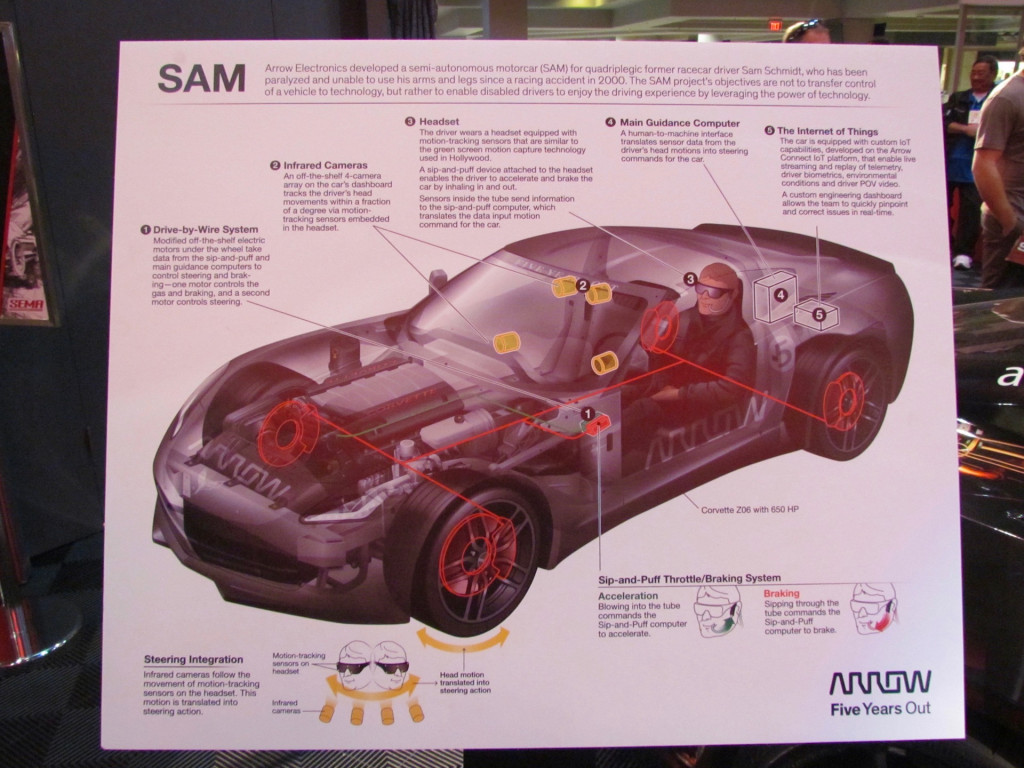 As Schmidt shared the story: In addition to its other ventures (Arrow Electronics is a Fortune 150 company with nearly 20,000 employees), Arrow employs 400 engineers who take off-the-shelf technology and repurpose it. One of its projects was called Semi Autonomous Motoring, or SAM for short. The idea was to equip a car in such a way that a person might drive it without the need for using hands or legs.

Schmidt thinks it’s ironic that the project was named SAM long before he became involved. His involvement came after Arrow asked a Denver neurosurgeon to recommend someone to try out the technology. The surgeon knew Schmidt’s story and suggested Arrow call him. The company did. At first, Schmidt said, he thought he was being punked.

But that was before his car was equipped, and he drove at speed again around the Brickyard, and raced up the 14 miles and 156 turns with almost no guard rail on the road up Pikes Peak, with multi-time hill climb champion Robby Unser riding shotgun — “Talk about faith in technology!” Schmidt smiled. 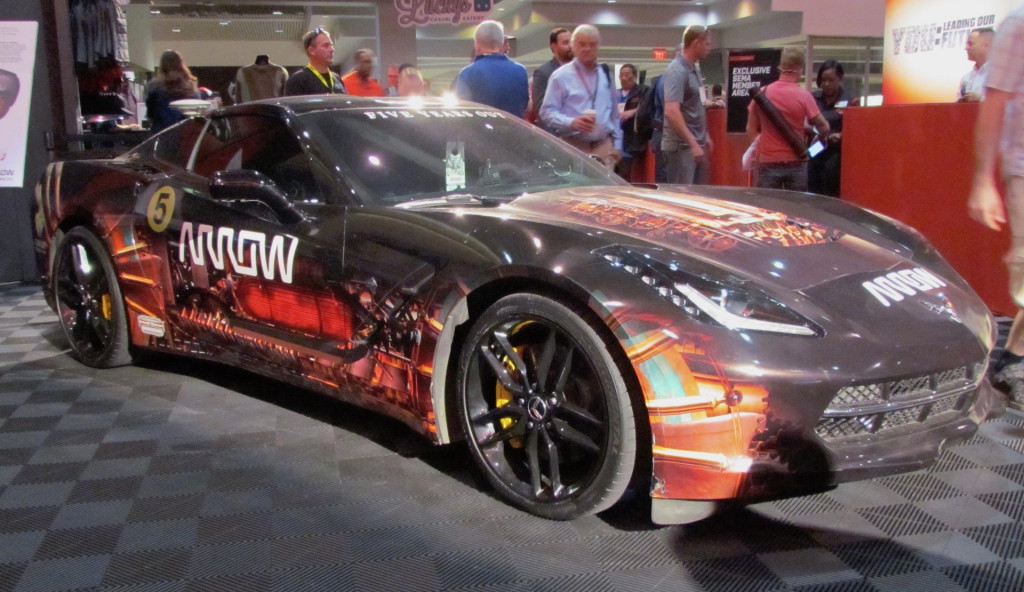 Schmidt can drive using head movements and with a straw-like device that he bites to slow and brake and blows into to accelerate (see Jay Leno’s Garage video below).

“I didn’t expect the sensation of being normal, of being in control,” he said of his reaction to driving again.

“We’re witnessing a technical revolution,” he added. “Put the right people in the room and give them the resources and a goal and it can change lives, it can save lives.

While Schmidt may be the first to receive a semi-autonomous driver’s license, he’s not the first driver to benefit from driver-assist technology. Consider all the new cars rolling out of dealerships with anti-lock brakes and smart cruise control and, yes, lane-change assistance.

But it’s not only new vehicles that can be so equipped. During the show, SEMA shared with its members a 73-page document, the “SEMA Advanced Vehicle Technology Opportunity Study,” that suggested a new growth industry for its membership.

A-das is what SEMA is calling such Advanced Driver Assistance Systems, which it adds is “new technology for old cars,” and part of what it sees as “the billion-dollar tech transformation” with some 260 million old-tech vehicles on the road waiting to be equipped with such things as forward-collision warning, driver-view augmentation, lateral collision-avoidance systems, parking assistance systems, even connected-vehicle systems so they can communicate with other traffic and with the roadway infrastructure. 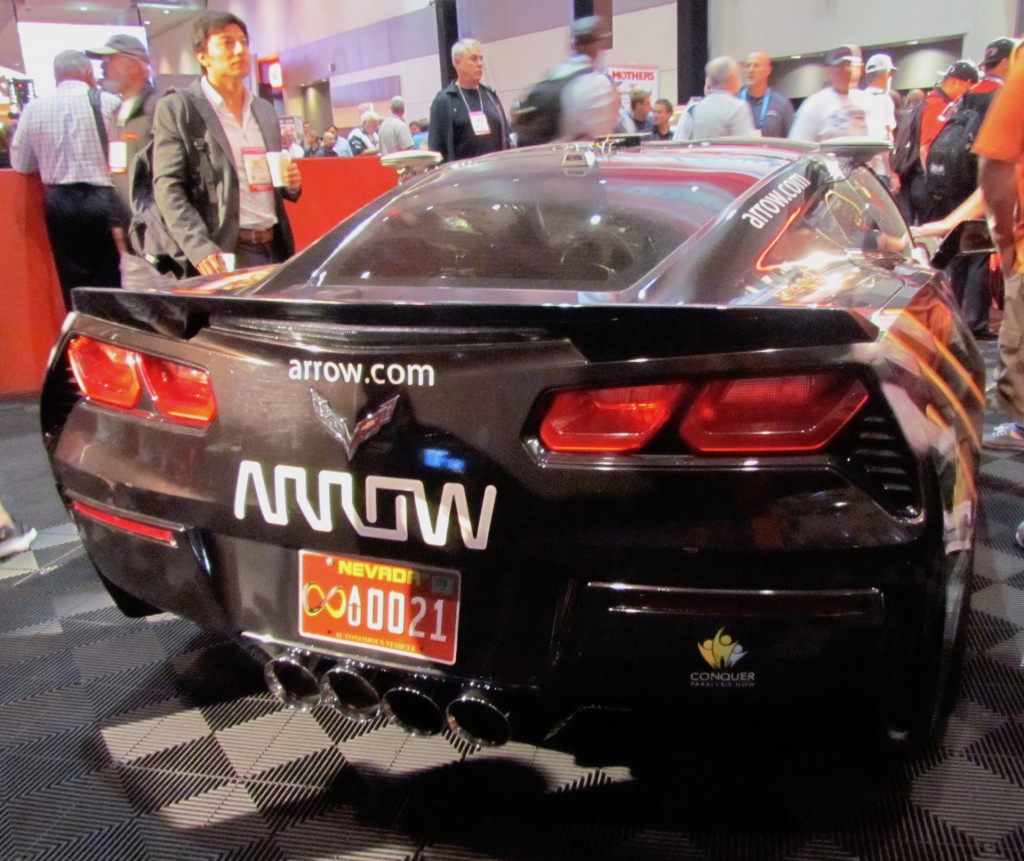 It’s all a matter of equipping old vehicles with cameras, chips and processors, and sensors, and the right software to control and coordinate them.

And it’s not just old vehicles, adds SEMA chief executive Chris Kersting, who notes that many entry-level new cars that are not equipped with such technology on assembly lines will provide another opportunity for the aftermarket to enhance.

Such technology certainly has disrupted Sam Schmidt’s life, and in very good ways.

And while he enjoys being able to drive again, Schmidt continues to be driven by his foundation’s goal. What Conquer Paralysis Now wants, he said, is for “a lot more people walking out of hospitals instead of rolling out of them.”