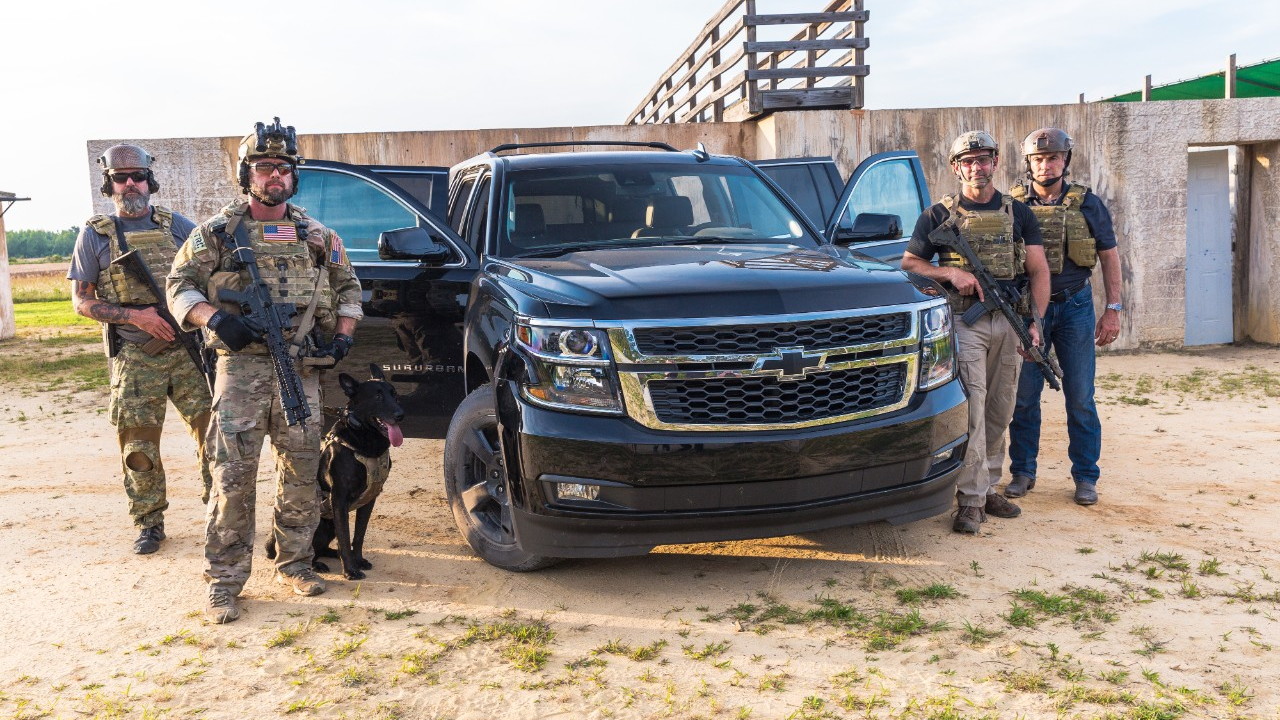 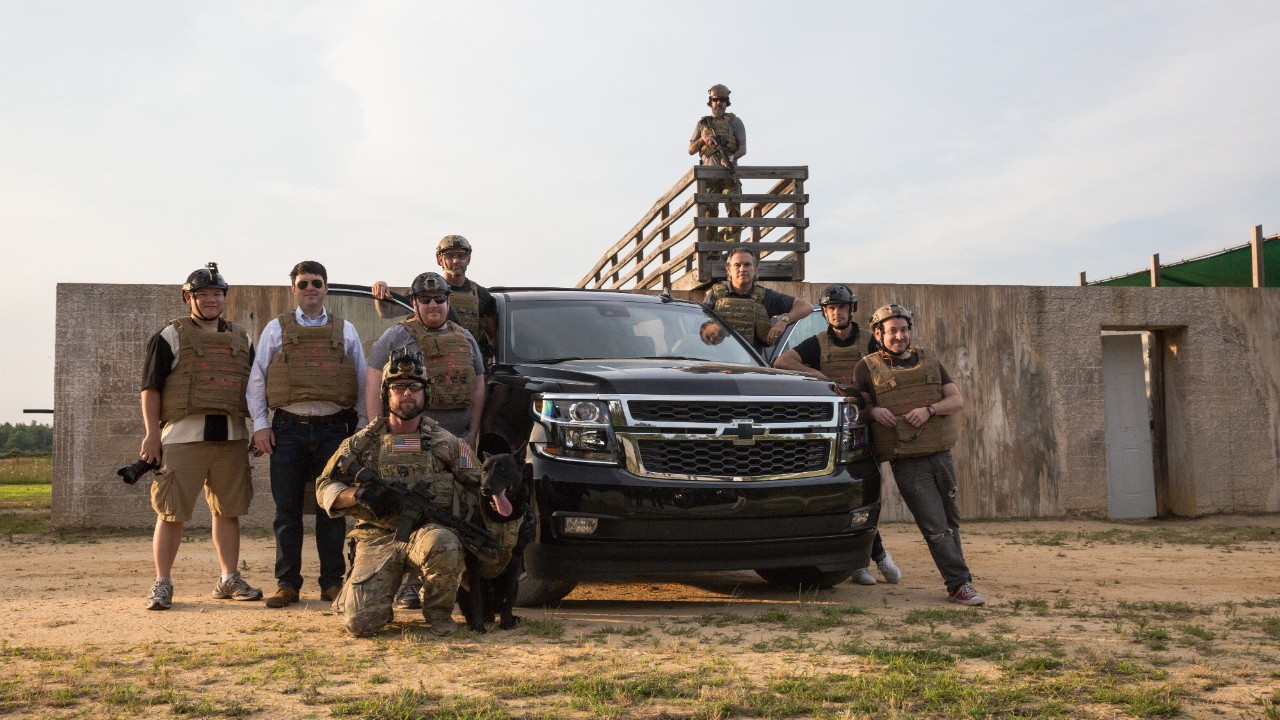 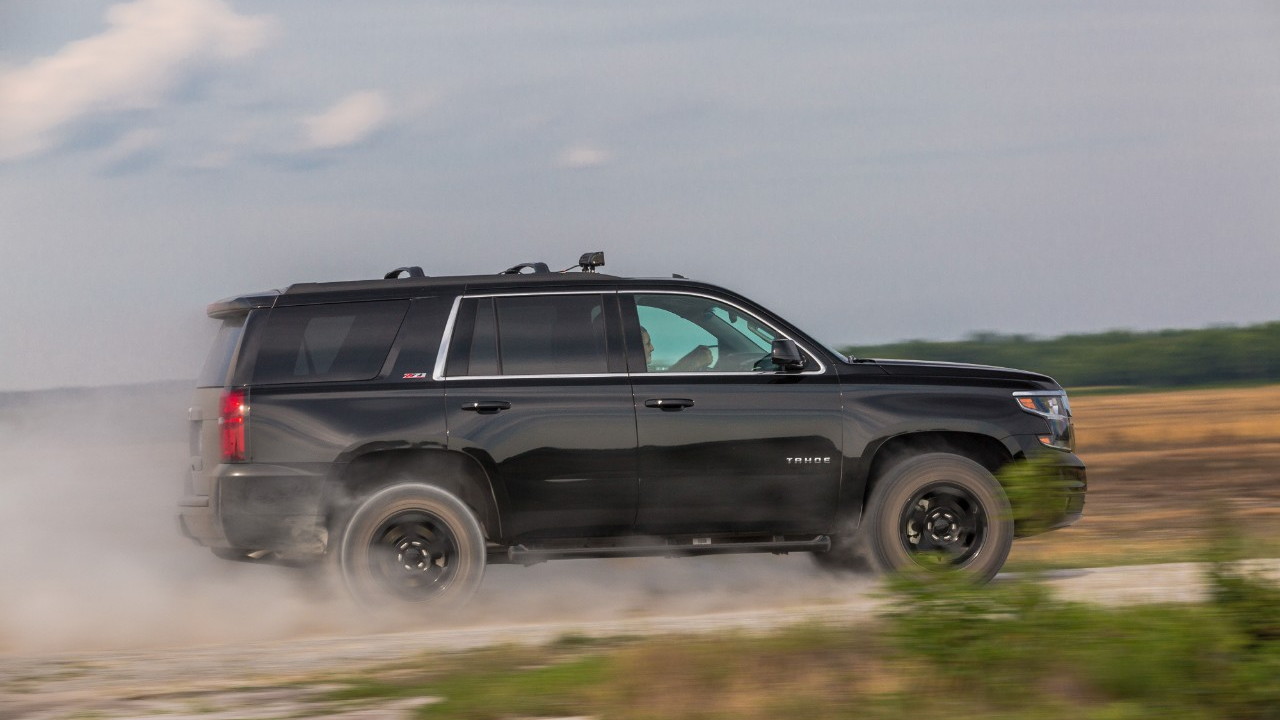 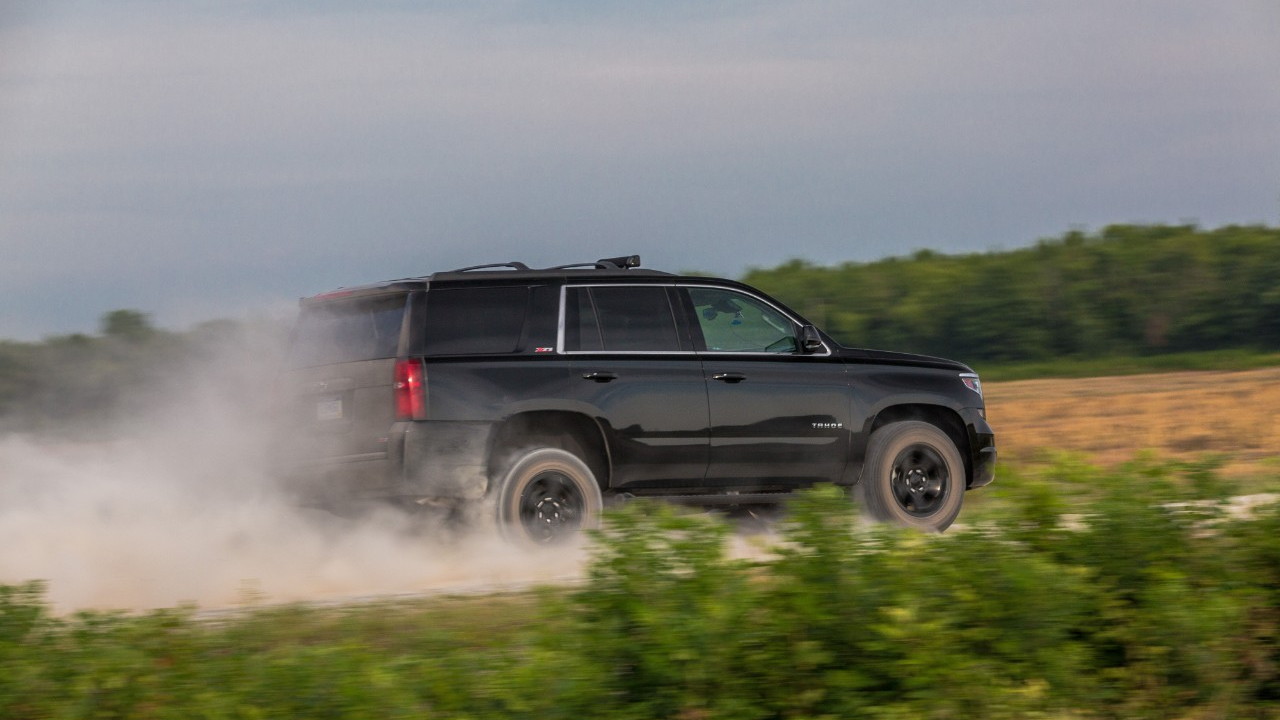 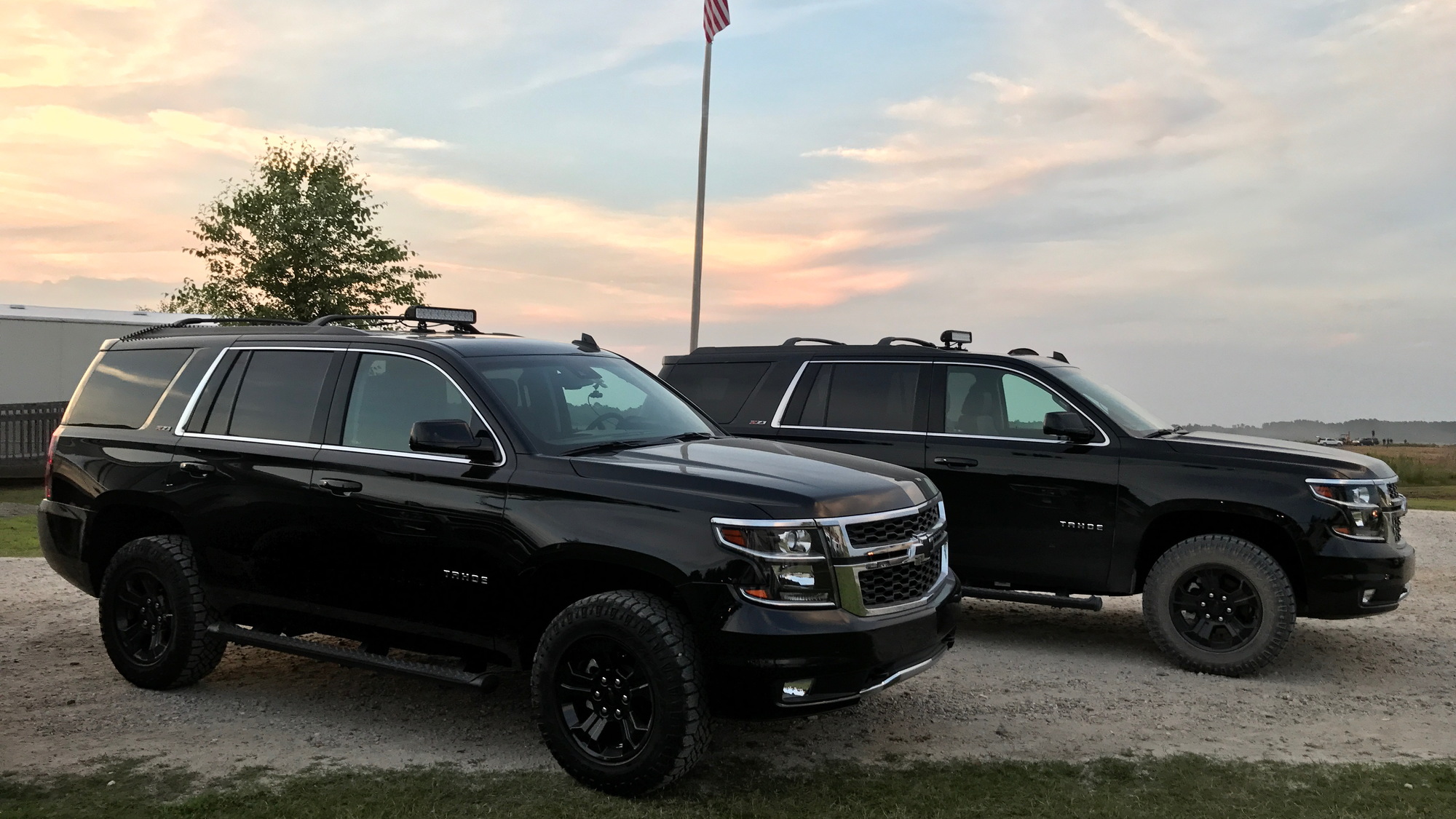 Get off the X.

That’s what you do when the shit goes down.

And in a vehicle, that means speed can be your friend.

That’s just one of the rules that Delta Force operators follow in wartime.

The “X,” in this case, is an attack, and if you are in a vehicle that is under attack, get off the X means get the hell out of there.

Now-retired Army Lt. Col. James Reese faced the X on the infamous Route Irish that leads from downtown Baghdad to Baghdad International Airport in 2003. He was the Delta Force deputy commander of the task force in charge of hunting Baath Party officials and other high-value targets in Iraq then. He and his commander were returning from Baghdad when the red Chevrolet Tahoe the pair was in drove under an underpass and was hit with a spray of bullets, 52 of which made contact with the SUV.

CHECK OUT: 2017 P-51 Mustang is Roush’s most powerful road car ever

As he approached the American checkpoint, Reese was throttling down from 120 mph because, as he noted, “speed is security—the faster you go, the harder it is for someone to get you." A bullet ricocheted off the vehicle, went through his arm, and lodged in the steering wheel. Another bullet hit his commander in the back.

Reese immediately mashed the gas to get off the X, turned off the lights to make the truck harder to hit, and raced the final three-quarters of a mile to the checkpoint.

He made it and the two men got safely to medics. He had a hole in his arm, but otherwise he was OK. The vehicle and seat structure had slowed the bullet that hit his commander in the back to the point that it didn’t even break skin. It just stung.

Reese waited two days to tell his wife that he had been shot for two days—that stung more.

After 25 years in the military, including 15 years in Delta Force, Reese is now retired, but he runs two companies as a private citizen. TigerSwan is a global risk management service, and The Range Complex is a Raleigh, North Carolina-based training facility that services government, military, law enforcement, corporate, and public clientele. Reese works with retired Delta Force operators in both endeavors.

Reese calls Delta Force operators the Jason Bournes of the United States Army. Its operators are more experienced than the Navy SEALs. According to Reese, the average age is 36 compared to 26 for members of SEAL Team 6. The team members of “The Unit,” as they call it, are trained in hand-to-hand combat, marksmanship, demolitions and breaching, espionage, and executive protection.

“Our guys are the world’s leading surgical shooters. That’s a mandate for Delta. We are the only ones who train how to discriminate friend or foe because in a hostage rescue you have to determine who’s a friend, who’s a foe in a split second.”

Delta focuses on brilliance in the basics. “There is no such thing as advanced to anything, just perfect execution of the basics under stress,” Reese said. Delta operators work on the basics over and over again until they master them and then they work on them under stress. Stresses can include a lack of sleep, darkness, heavy breathing after running, and many other scenarios. It’s a certainty that they will be stressed when they are under fire in combat.

There is one more skill that Delta Force operators must master.

“Other than shooting, something that is more important in what we do is we drive,” Reese said. “We drive vehicles all over the world—whether it’s a Chevy B6 Suburban with the President going to downtown Baghdad on Thanksgiving Day in 2004…or we’re driving some Jenga truck up the Hindu Kush in Afghanistan or we’re driving some old jalopy Chevy down in Colombia hunting down Pablo Escobar.”

While other parts of the military and law enforcement might put junior people behind the wheel, Delta Force looks for experience.

“In our place, the people who drive are the most experienced because that vehicle, for one it’s dangerous. It’s got a lot of vehicle dynamics that people don’t understand about,” Reese said.

Another former Delta operator said he was part of a mobility team. That meant he had to be able to drive or “acquire” (read: steal) anything with wheels, from a motorcycle to a semitrailer. Bourne indeed. A mobility team member is the keeper of that knowledge and he teaches it to other operators.

“The Tahoe and Suburban are a big part for us around the world,” Reese said. “We used them in Beirut, Sarajevo, Baghdad, Colombia—Bogota, for years. Whether you're protecting ambassadors in high-threat countries—we’re the guys who do that—or bringing the President to Baghdad to see the troops…Chevy vehicles have been a big part of our lives and we’ve used them a lot.”

While the Tahoe is used by Delta Force, the Suburban’s extra space makes it the more desired vehicle. It can fit more operators and more gear.

Reese speaks highly of the Chevrolets: “A couple of guys have great stories of IEDs hitting our B6 Suburbans and with the runflats and driving right through them, half the vehicle being blown apart...It’s pretty amazing,” he said.

Chevrolet introduced the Tahoe and Suburban Midnight Editions for the 2017 model year, and they are perfect for military duty, or at least the armchair hero civilian equivalent. They both come in black and they are offered in two versions, the LT and Z71 Midnight Editions. When they roll up on you, it looks like you are about to be abducted by the "Men in Black." The LT gets a street performance look, with black 20-inch alloy wheels, black bowties, black roof rack crossbars, and a black grille insert. The Z71 version has an off-road suspension, tubular side steps, fog lamps, tow hooks, sill plates, a 3.42 rear axle, a two-speed transfer case, hill descent control, a high-capacity air cleaner, 18-inch black painted wheels with Goodyear Wrangler DuraTrac tires, underbody skid plates, and the same black exterior features.

For desert duty, the Z71 package is the best choice, and the military tends to outfit its Tahoes and Suburbans with the type of equipment the Z71 package offers. These vehicles also often get armor that consists of plates in the doors and engine compartment, adding perhaps 800 to 1,000 pounds of weight. When completely loaded with armor, gear, and personnel, these vehicles may weigh as much as 12,000 or even 15,000 pounds. Given that type of duty, suspension and engine upgrades are often necessary.

Driving under cover of darkness

The Range Complex is a place where people learn to shoot pistols, rifles, and even sniper rifles. TRC also offers more advanced training for close quarters battle within buildings. I visited the facility as Chevrolet's guest and got the chance to shoot a pistol and sniper rifle. For the record, I hit the target from 25 yards 12 or 13 out of 15 times on the pistol range, and hit the 100-, 200-, 300-, and 400-yard targets on the sniper range, then missed when hurried from 610 yards. Then again, being hurried is stress, and I failed under stress. Looks like I'm not Delta material.

While The Range Complex doesn't teach driving, I also drove like Delta does. At least, I tried to.

For a mission or just to stay as invisible as possible, Delta Force will run a black vehicle at night using infrared technology so the driver can see, but the enemy can’t see the vehicle. This requires an infrared light bar with a red light signature that should be off as much as possible so the enemy can’t see it coming. It also means all interior lights need to be shut off or blacked out. The driver then uses NODs (night optical/observation vision devices or infrared goggles) to see. Driving with the lights off lessens the chance of getting hit by remote-controlled IEDs. Pressure-based IEDs can still be a problem.

I tried this type of night driving at The Range Complex with single- and double-lens NODs. The single-lens variety offers a very limited 25-degree horizontal field of vision, so it requires that you look around from side to side—checking your 3:00 and your 9:00—on a regular bases to keep the vehicle on the road and out of trouble.

The double-lens NOD has a 40-degree field of vision, which still requires a lot of looking around. The two lenses converge into one larger round green circle of view. I also got to try on $30,000 quad infrared goggles with four lenses that offer a 100-degree field of vision. That’s about half of what our eyes see. It’s quite good, but still requires that the driver keep his head on a swivel.

Driving this way proved to be feel more natural than I had anticipated, as long as I kept looking around to take in both sides of the off-road course I was running. It really sunk in how effective it could be when I stopped, took off the goggles, and saw complete darkness. It’s crazy to drive with no lights on and still see fairly well.

Of course, this is just the tip of the iceberg when it comes to driving for military purposes. Delta Force operators know more ways to protect our interests and assault strategic targets than any civilian can imagine. No matter where America goes in the world, Delta Force is there and they are probably using Chevrolets in their missions. Let's just hope that when their operators encounter danger, they can get off the X.

Chevrolet provided travel and lodging to Internet Brands Automotive to bring you this firsthand report.