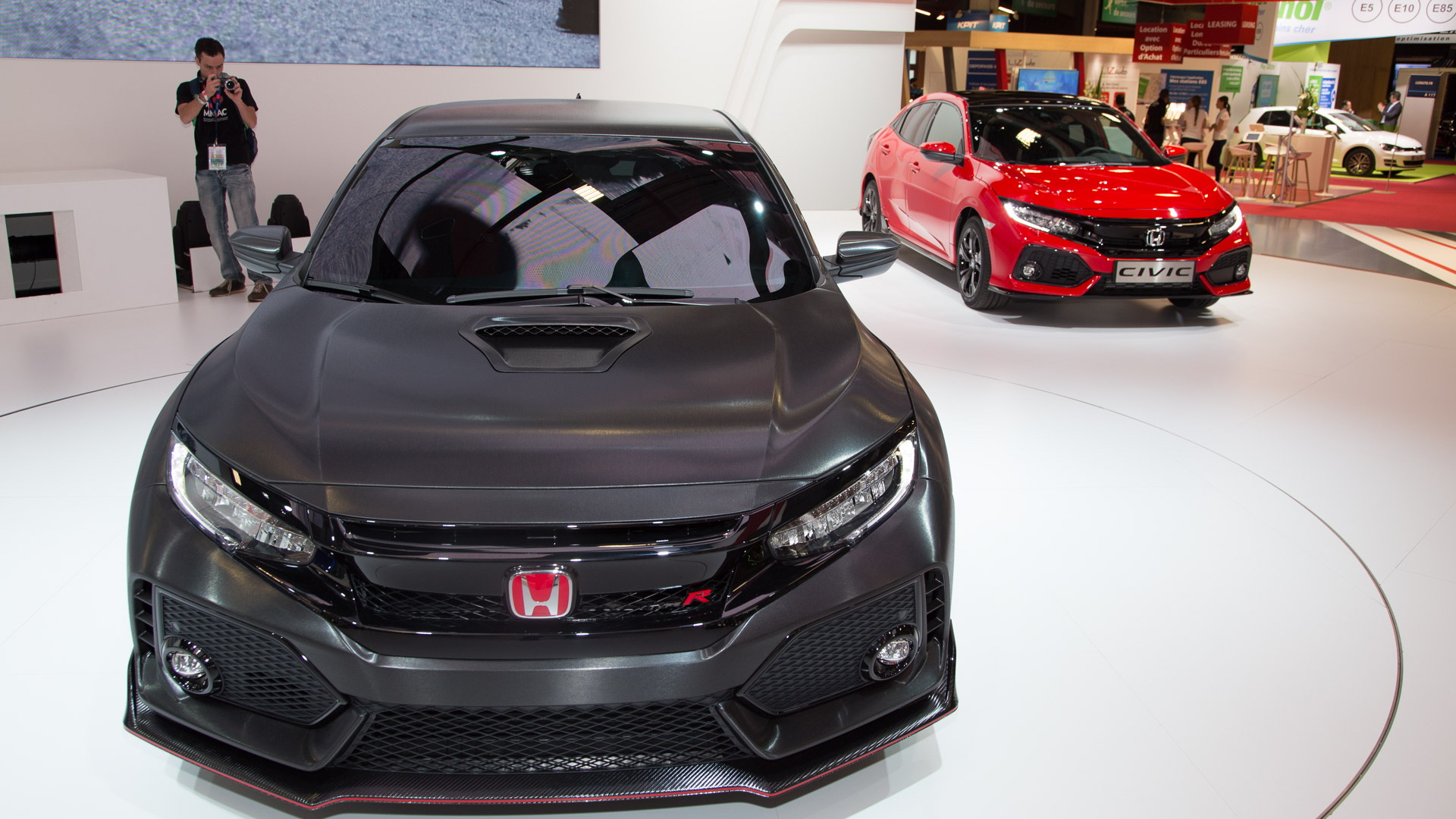 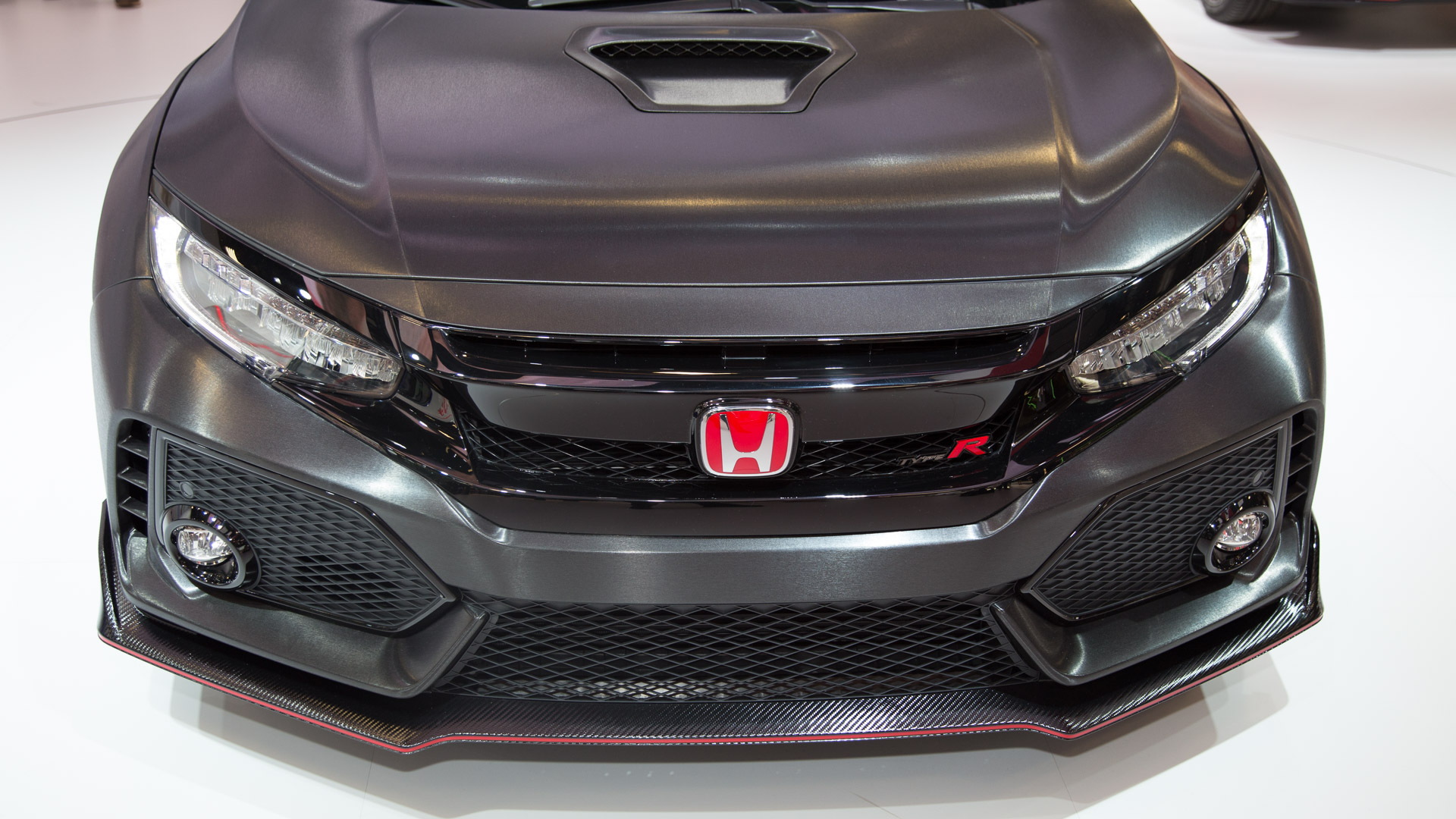 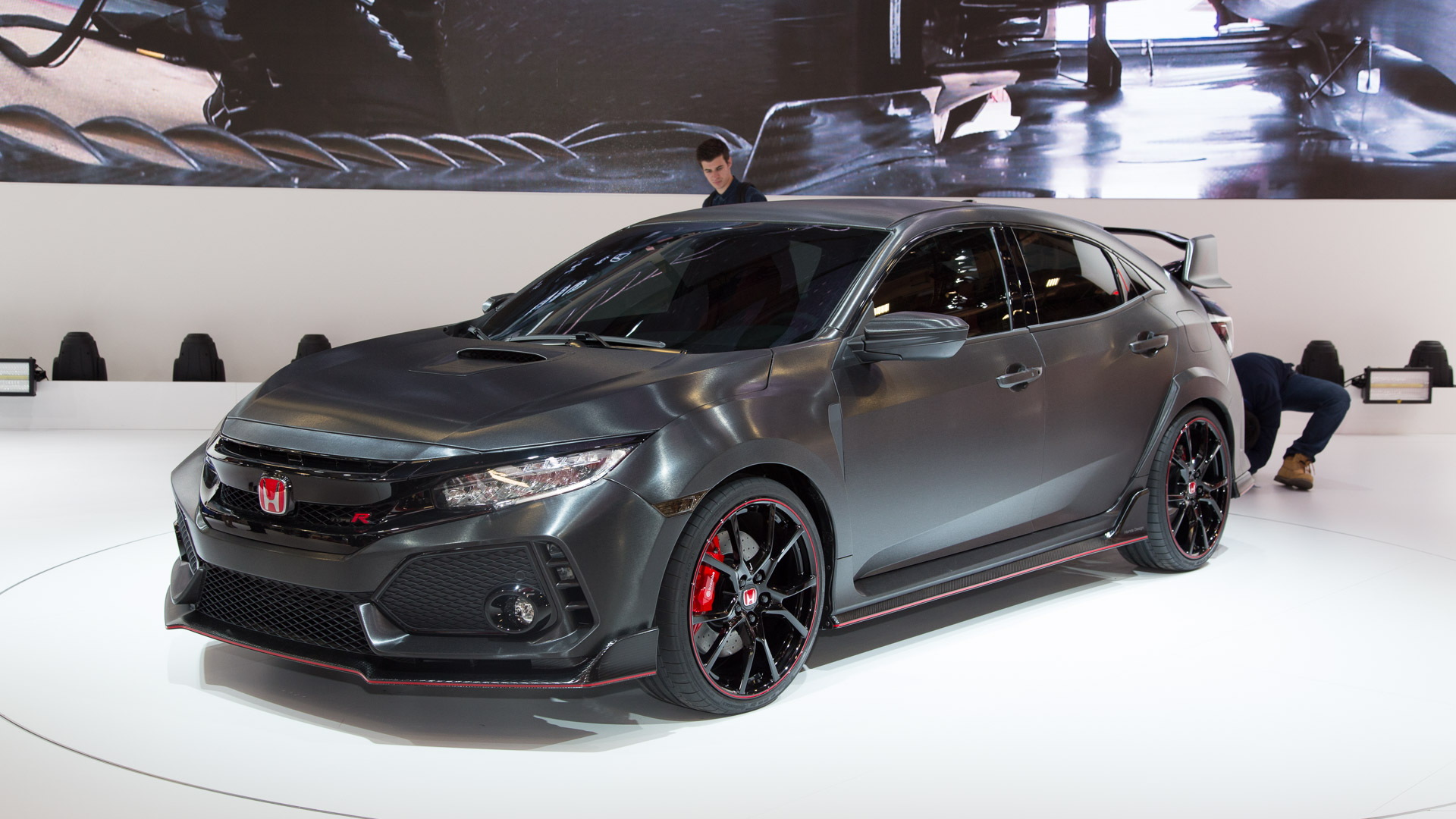 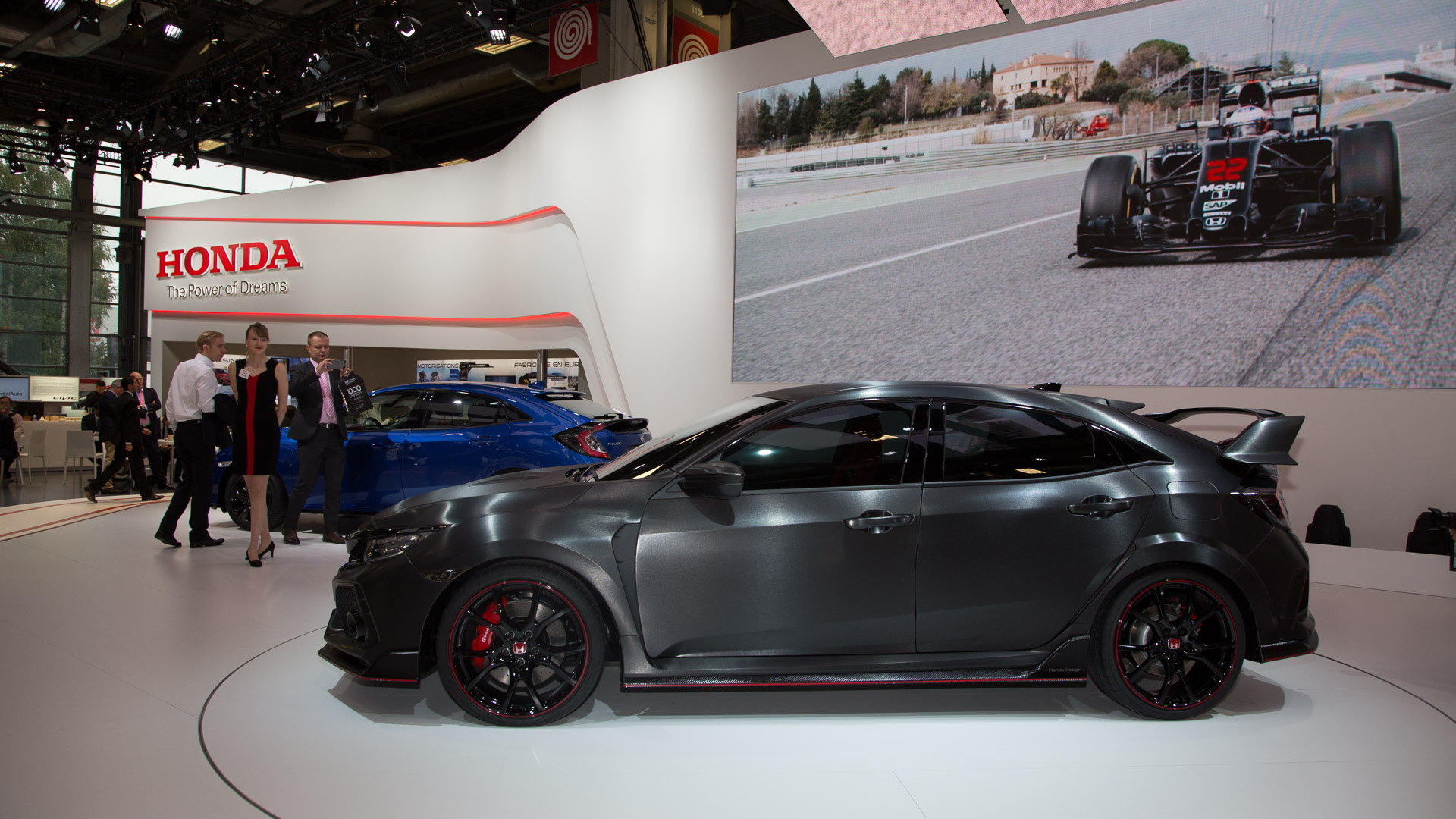 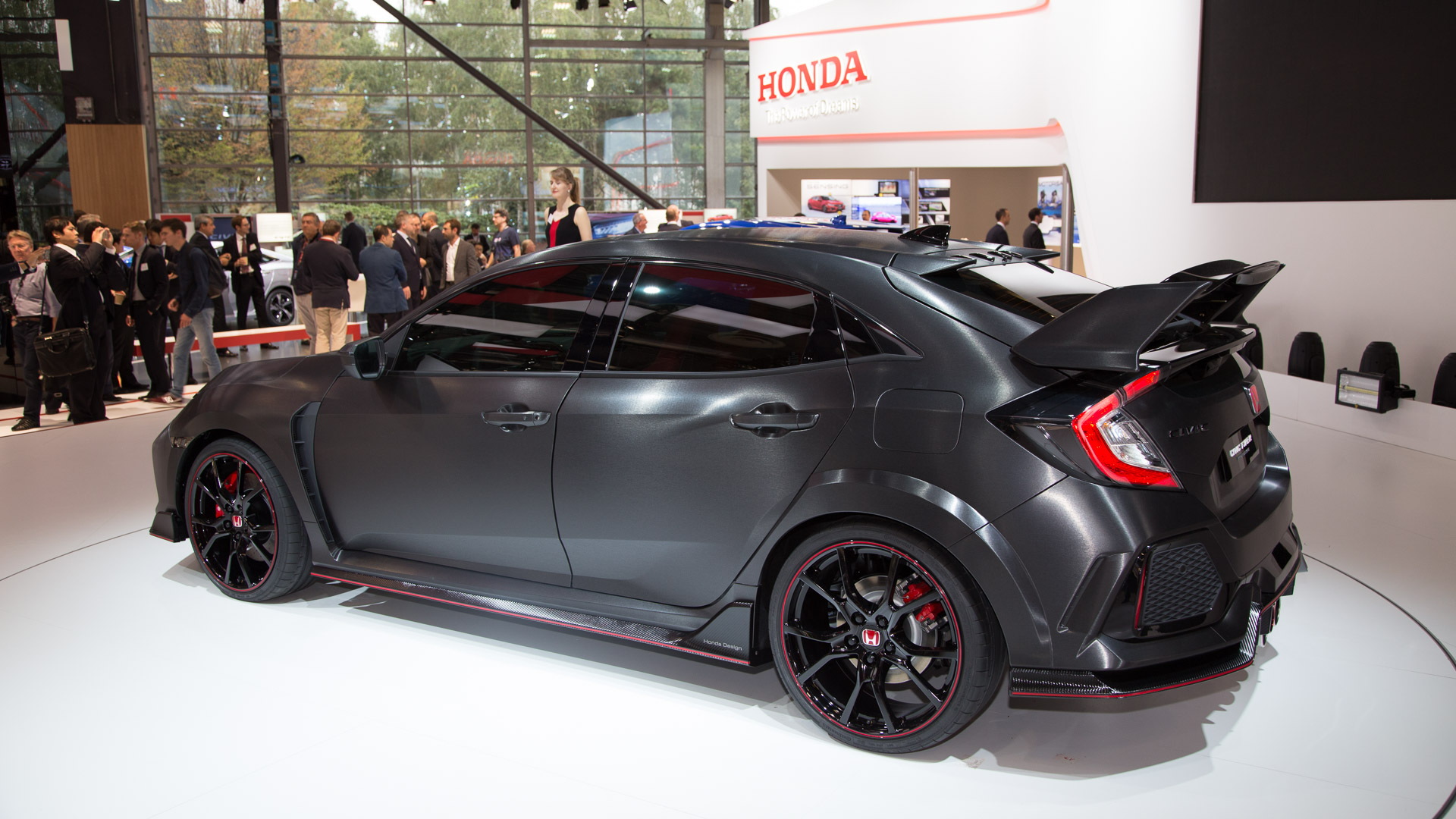 In Honda speak, Prototype means almost production ready. Prototype vehicles are often shown just a few months ahead of the on-sale date and the changes between them and the production vehicles are usually minor.

That should warm the hearts of Honda fans anxiously awaiting the Civic Type R as the car Honda revealed Thursday at the 2016 Paris auto show is a thinly-veiled version of the 300-plus horsepower hot hatch we will receive starting next spring. You can compare it with actual prototypes of the Civic Type R production model testing in the wild.

This is the first R-badged Honda ever to come to the United States, and it turns up the visual drama with an aggressive front fascia with car large ducts for cooling, extended wheel arches, and a big rear wing.

Other notable design elements include slatted ducts in the front fascia, diamond-pattern mesh grille inserts, a trapezoidal hood scoop, vortex generators at the rear edges of the roof, three tailpipes including a smaller diameter center pipe with a red accent, red "H" badges, and smoked lenses for the LED taillights and side indicator lights.

The production car won't get the finish of the Prototype, which is a wrap with the look of brushed aluminum. The 245-millimeter rubber and 20-inch wheels, also with red accents, may not make it to production as well. We expect that 19s are more realistic.

Thus far, we have no news or views of the interior, though those will likely come when the production car is shown at the 2016 SEMA show in Las Vegas November 1-4. We also don't know the power figures. However, the new Type R should meet or beat the 306 horsepower made by the turbocharged 2.0-liter inline-4 in the previous-generation Type R that is currently on sale outside the U.S. It will likely come with front-wheel drive, like the current car. Most rivals, though, are all-wheel drive. They include the Ford Motor Company [NYSE:F] Focus RS, Subaru WRX STI and Volkswagen Golf R..

Be aware, too, that the previous Type R will have very little to do with the upcoming model, right down to the structure, which will be based on the 10th-generation Civic that went on sale in the U.S. last year. The Type R will only come as a hatchback, though, and the standard version of that body style is hitting dealer showrooms just about now.

The Civic Type R will be built exclusively in Swindon, England.

For more from Paris, see our dedicated hub.