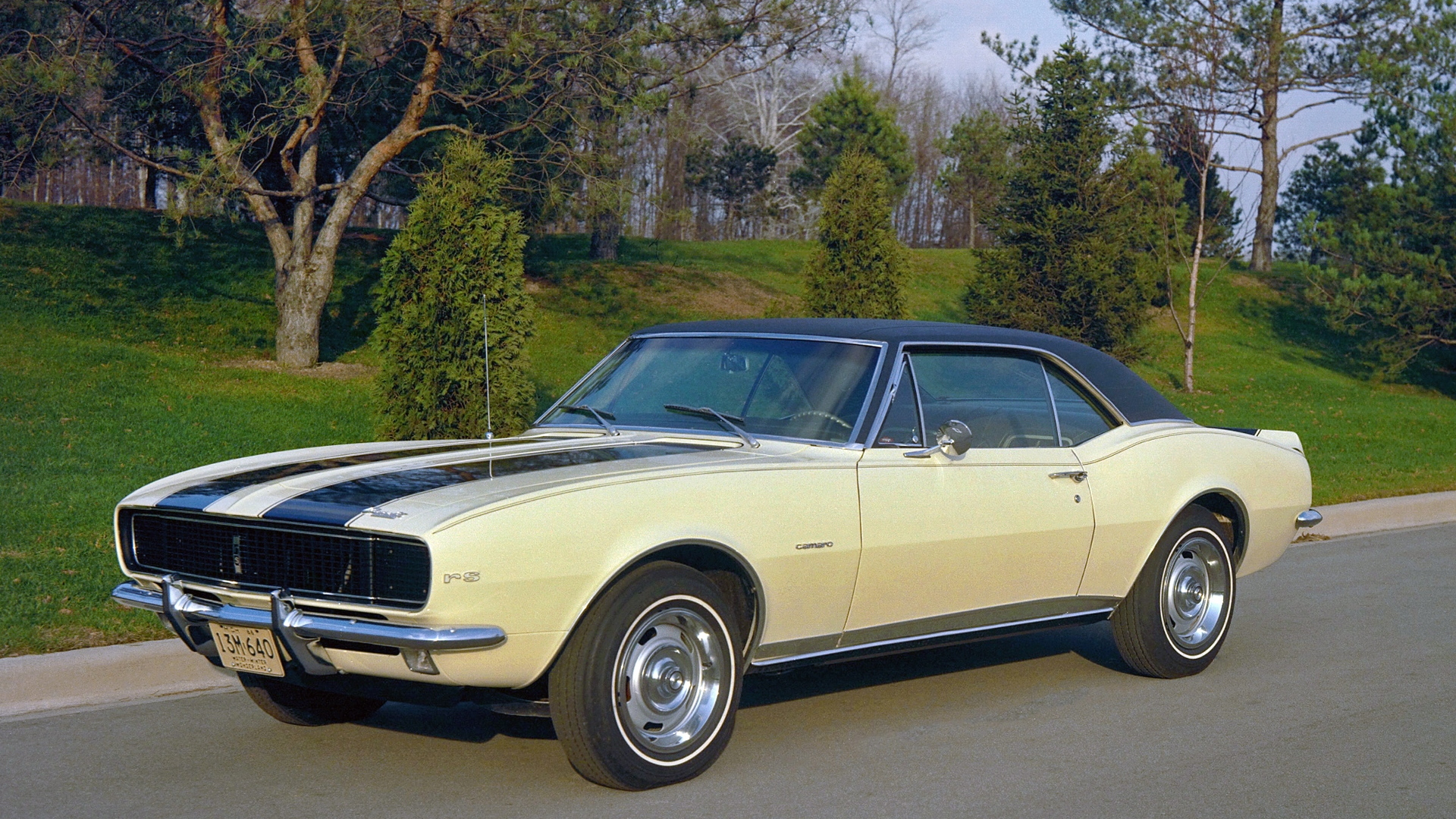 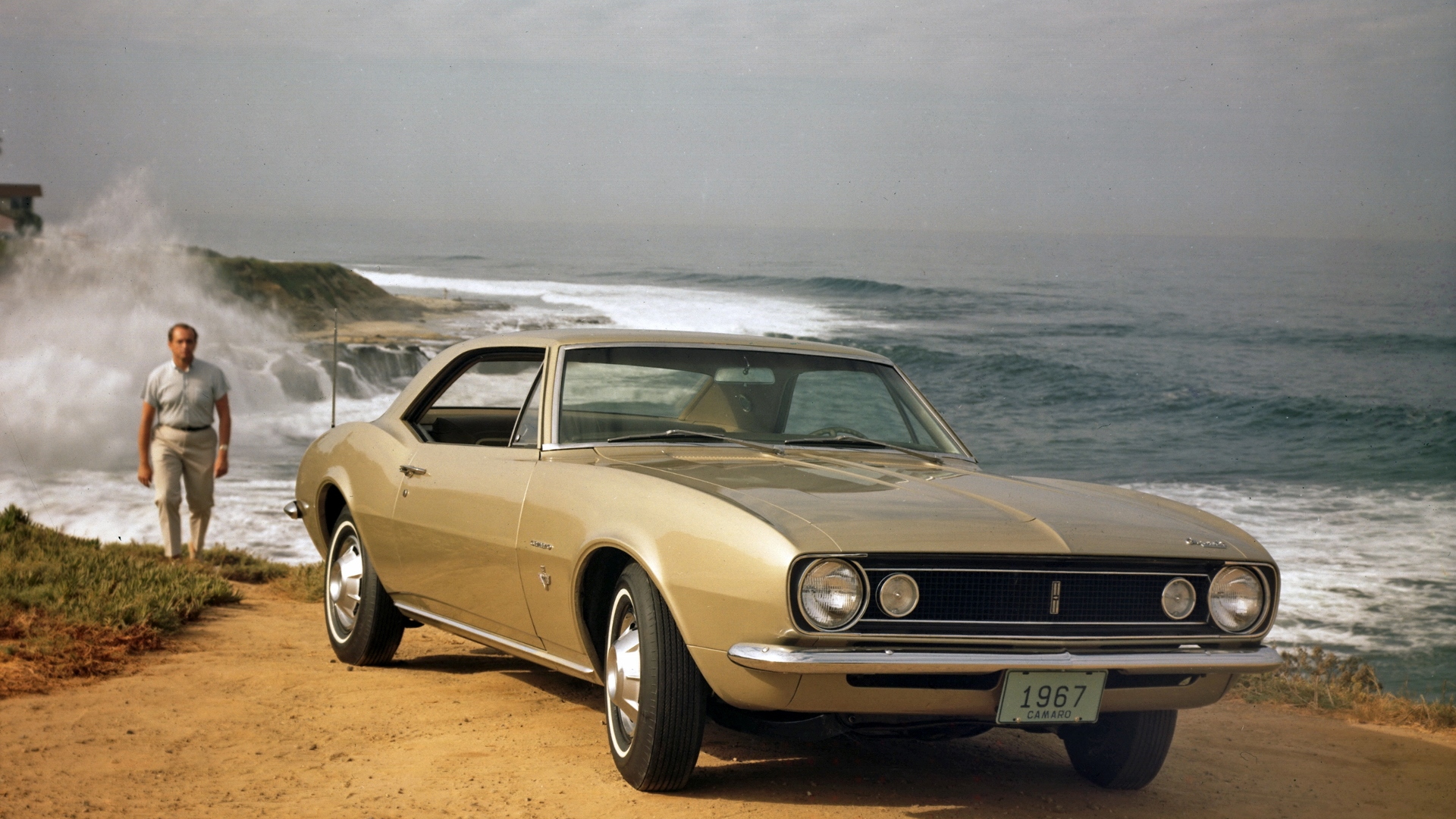 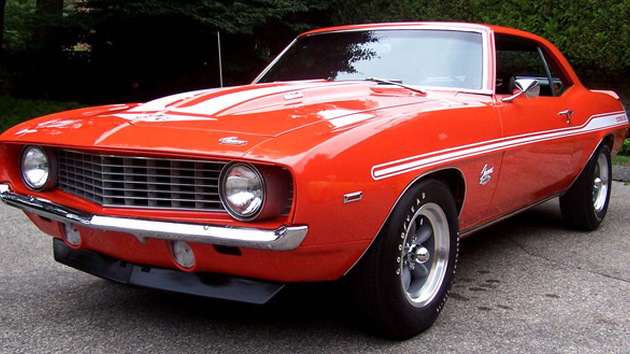 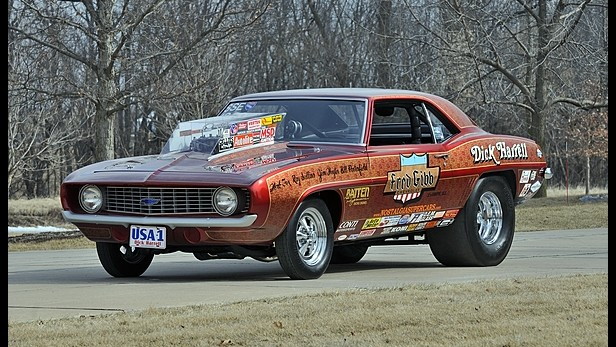 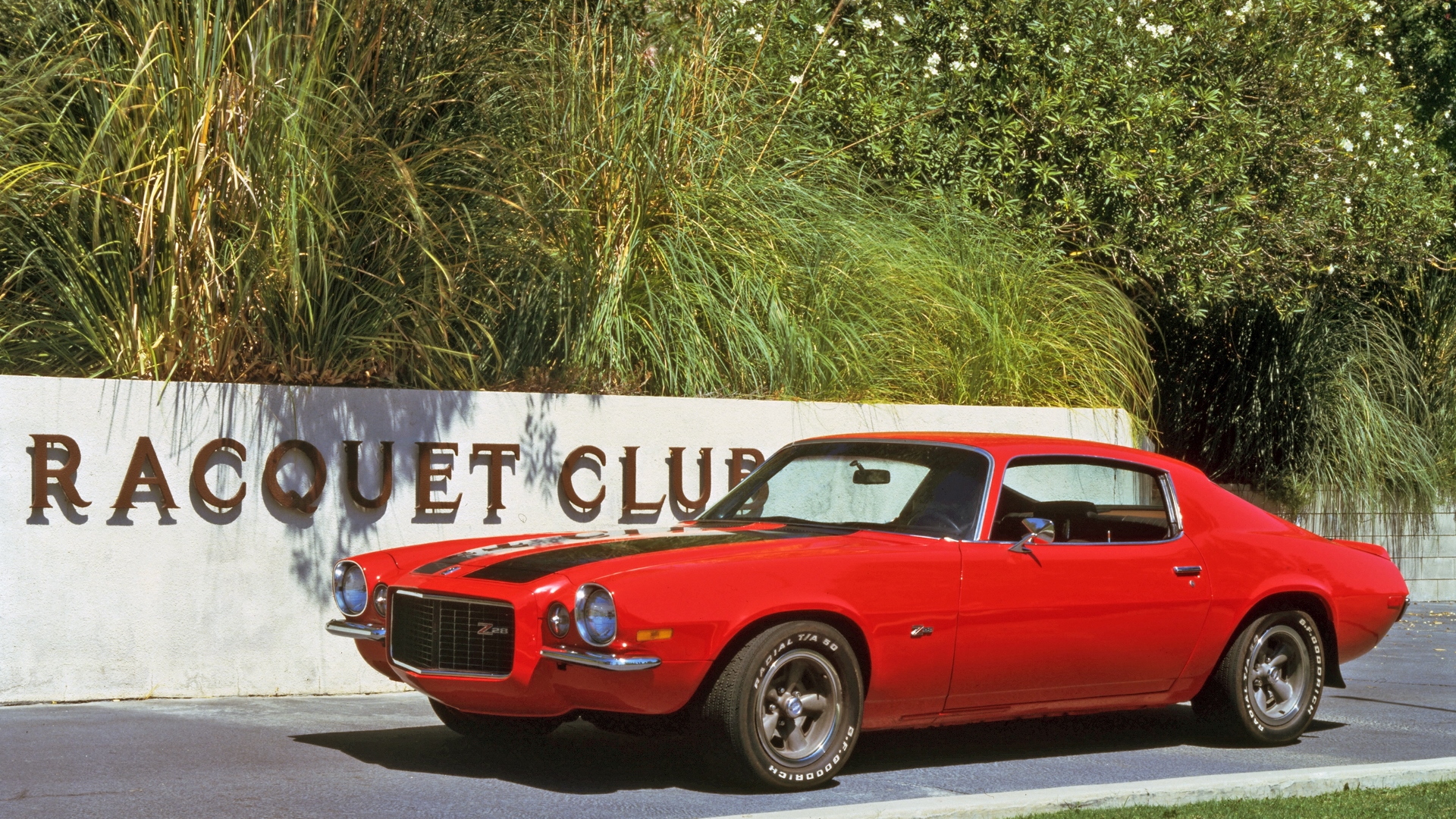 The Chevrolet Camaro is redesigned for the 2016 model year, and we like it...a lot. In fact, we like it so much that we named the Camaro SS the Motor Authority Best Car To Buy 2016. A new platform derived from the Cadillac ATS stiffens the body and cuts weight by at least 223 pounds. The sublimely tuned electric power steering makes turning the wheel a joy, and the Corvette-sourced LT1 V-8 provides performance figures that were only possible with specialty engines in previous Camaros.

While the new Camaro is a winner, it builds upon the looks, the engineering, and the performance of excellent Camaros of the past. Over its 49-year run, the Camaro has been an astoundingly fast and beautiful V-8-powered muscle car, a stylish daily driver, a purpose-built drag racer, and a track athlete ready for a road course. Here, we take a look at the greatest production Camaros of all time. Check it out and see if your favorite Camaro is on this list.

The Camaro made its debut on September 12, 1966 as a four-seat coupe and convertible. It is widely viewed as a reaction to the immensely popular Ford Mustang of 1964, but Chevrolet had been toying with the idea since 1962. The car was based on the upcoming next-generation Chevy II/Nova unibody platform with a front subframe. The base price was $2,466, and like the Mustang, it was a pony car with large a choice of inline six-cylinder and V-8 engines stuffed into a compact package. The most powerful standard line Camaro was the 325-horsepower SS396, but a limited number of special-order SS396s cranked out 375 horsepower. Chevrolet sold 220,917 Camaros that first year while Ford sold 472,121 Mustangs.

Though it wasn't the most powerful Camaro in that first year, the Z-28 was the best handling choice. Developed to qualify the Camaro for the Sports Car Club of America's new Trans Am class, the Z-28 featured a 302-cid V-8 that spun out 290 horsepower and wound to high rpms. It was essentially the 327 block with the crankshaft from the 283. The firmer F41 suspension improved handling, and exterior changes included dual hood and trunk stripes and Rally wheels on red-stripe tires. Only 602 Z-28s were built for the 1967 model year, making it a desirable collector car today. Z-28 Camaros won three of the 12 Trans Am events in 1967, just one behind the championship-winning Mustangs, but the Camaros would go on to dominate the 1968 season.

The most powerful and rarest Camaro of the 1960s was the legendary ZL-1, which was essentially a drag race-ready factory car for the National Hot Rod Association's Super Stock class. Available only through the COPO program, the heart of the ZL-1 was an aluminum block 427-cid V-8 racing engine that officially produced 430 horsepower, though actual output was likely over 500 horses. The cars also had cold-air induction, a Harrison four-core radiator, transistorized ignition, multi-leaf rear springs, and a heavy-duty 4.10 12-bolt rear end--prime equipment for drag racing. Only 69 of these monstrously powerful Camaros were built, making the ZL-1 one of the most valuable Camaros today. The car shown here is the first one ever built, and is done up in full drag race regalia. It sold for $400,000 in 2012 at a Mecum Auction.

The second-generation Camaro made its debut on February 26, 1970, offered only as a coupe. With styling cues from Jaguar and Ferrari, it is viewed as one of the most beautiful cars ever to come out of Detroit. The new car was longer, lower, and wider than the outgoing model, and that gave it more interior space. It handled better and rode softer, too. All the improvements inspired Road & Track magazine to call it the best American car of the day. The Z-28 package came with the 360-horsepower LT1 350-cubic inch V-8 from the Corvette. Car & Driver piloted a Z28 to a 0 to 60 mph time of just 5.8 seconds. The starting price for a V-8 Camaro was $2,726 and the Z28 package ran another $572.95.

Gas shortages and government emissions regulations sapped the power from Camaros in the mid-1970s, but power returned a decade later. The IROC-Z supplanted the Z-28 as the Camaro performance leader starting in 1985, but the 1987 model was significant for two reasons. First, the 305-cubic-inch V-8 gave way to a 350-cubic-inch (5.7-liter) V-8 making an extra 10 horsepower for a total of 225. Second, the convertible body style returned for the first time since 1969. The 5.7 was a $1,045 option for the IROC-Z and it propelled the car to a 6.3-second 0 to 60 mph time. The IROC-Z was named after the International Race of Champions, which pitted star-studded drivers from all around the world in equally prepared Camaros.

Dwindling demand for sporty coupes, caused in part by the proliferation of SUVs, spelled the end of the Camaro after the 2002 model year. Chevrolet gave it a proper send-off with a $2,500 35th Anniversary Package for the SS coupe and convertible. It was offered only in red and included silver stripes with a checkered flag pattern, unique fender badges, embroidered headrest logos, and special 10-spoke wheels with machined surfaces and black accents. Motivation was provided by the LS1-V-8, now up to 325 horsepower. Performance was thrilling. In Motor Trend testing, the 0 to 60 mph run took just 5.2 seconds and the quarter mile passed in 13.5 seconds. It wasn't enough to sustain sales, though, and the Camaro went on hiatus for eight years.

The Camaro returned for the 2010 model year, and Chevrolet engineers quickly set out to develop a car worthy of the revered ZL1 designation. Under the hood, they installed the supercharged 6.2-liter LSA V-8 from the Cadillac CTS-V, here making 580 hungry horses. Other performance upgrades included big-and-bigger Goodyear Supercar tires on lightweight alloy wheels, GM's quick-acting Magnetic Ride Control suspension, and large Brembo brakes at all four corners. In Car and Driver testing, the ZL1 rocketed from 0 to 60 mph in four seconds flat and posted a blazing quarter-mile time of 12.3 seconds. Priced around $57,000 (including a gas-guzzler tax), the ZL1 was the most expensive Camaro yet, but it would be surpassed by a healthy sum two years later.

When it returned as a 2010 model, the Camaro didn't ride or handle all that well. However, Chevrolet made continuous improvements, and the 1LE package of 2013 was the result of much of that work. Inspired by a little-known race-ready package from the late 1980s, 1LE was a $3,500 option package for the Camaro SS. In came with the sticky front tires and lightweight front wheels from the ZL1 (though here at all four corners), thicker front and rear stabilizer bars, monotube rear shocks, a front strut tower brace, a high-capacity fuel pump, and a short-throw shifter. Cosmetic changes included a flat black wrap for the hood, a black rear spoiler, a black front splitter, and a steering wheel with V-shaped spokes. Reasonably priced, 1LE turned the Camaro into the best handling pony car under $40,000.

With a midcycle design refresh came what turned out to be the best handling Camaro of all time. That's because this car was outfitted with track-focused equipment. The revived Z/28 featured the suspension tweaks employed by the Camaro 1LE package, but with stiffer shocks, thicker anti-roll bars, unique monotube shocks, and even lighter 19-inch wheels and tires. Weight was down 300 pounds compared to the ZL1 performance king, and a body kit improved downforce. The big track enablers, however, were the Pirelli P Zero Trofeo R tires, which were basically street-legal racing tires, and the standard carbon ceramic brakes. Of course, the 7.0-liter, 505-horsepower V-8 from the Corvette Z06 also contributed to the exploits of this track athlete. The 0 to 60 mph sprint took 4.4 seconds, and the quarter-mile time was 12.7 seconds. That meant the Z/28 wasn't as fast the ZL1 in a straight line, but it was quicker around a track thanks to the all that grip and the big brakes. It cost more, too, with a hefty $76,000 price tag.