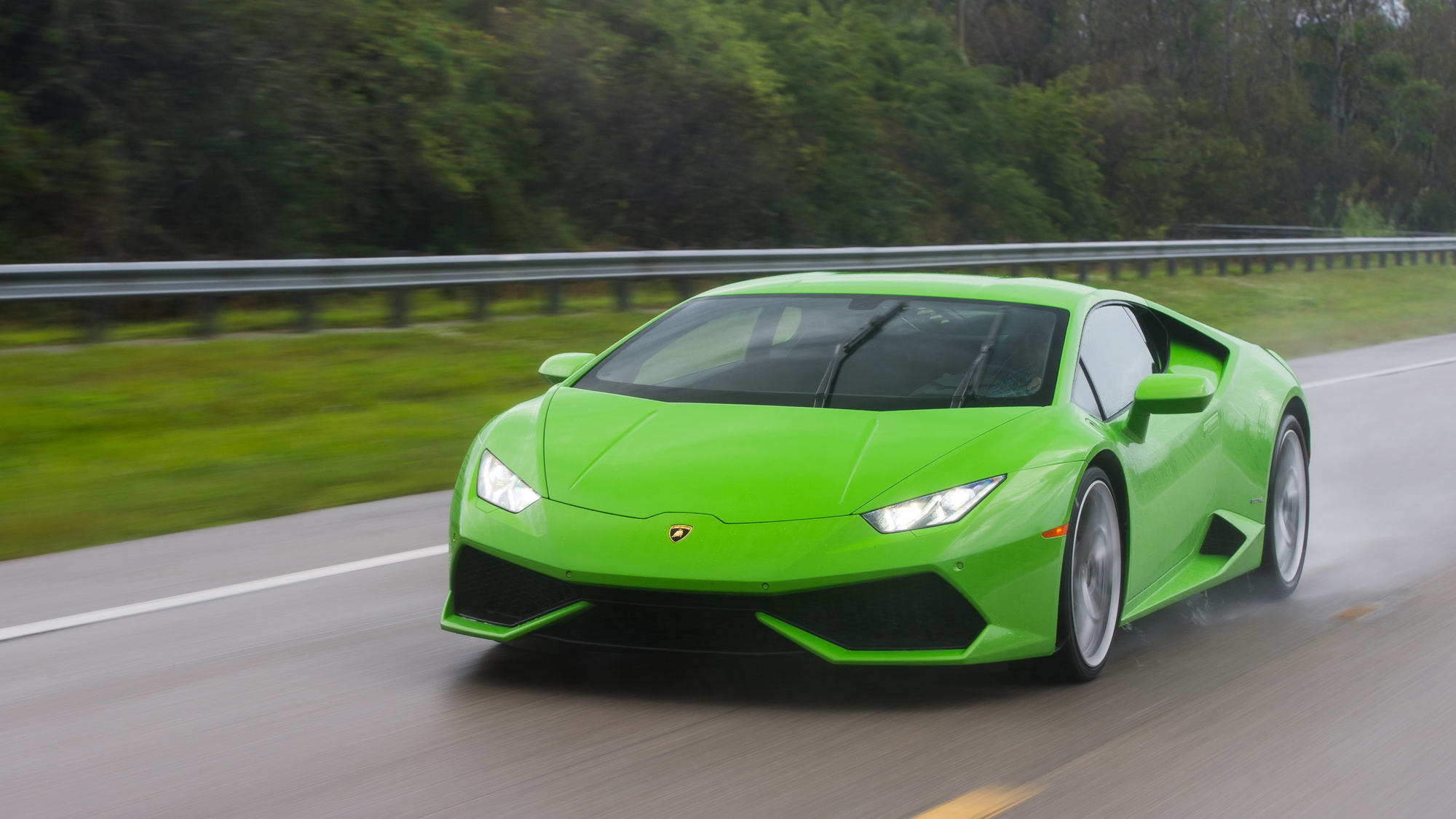 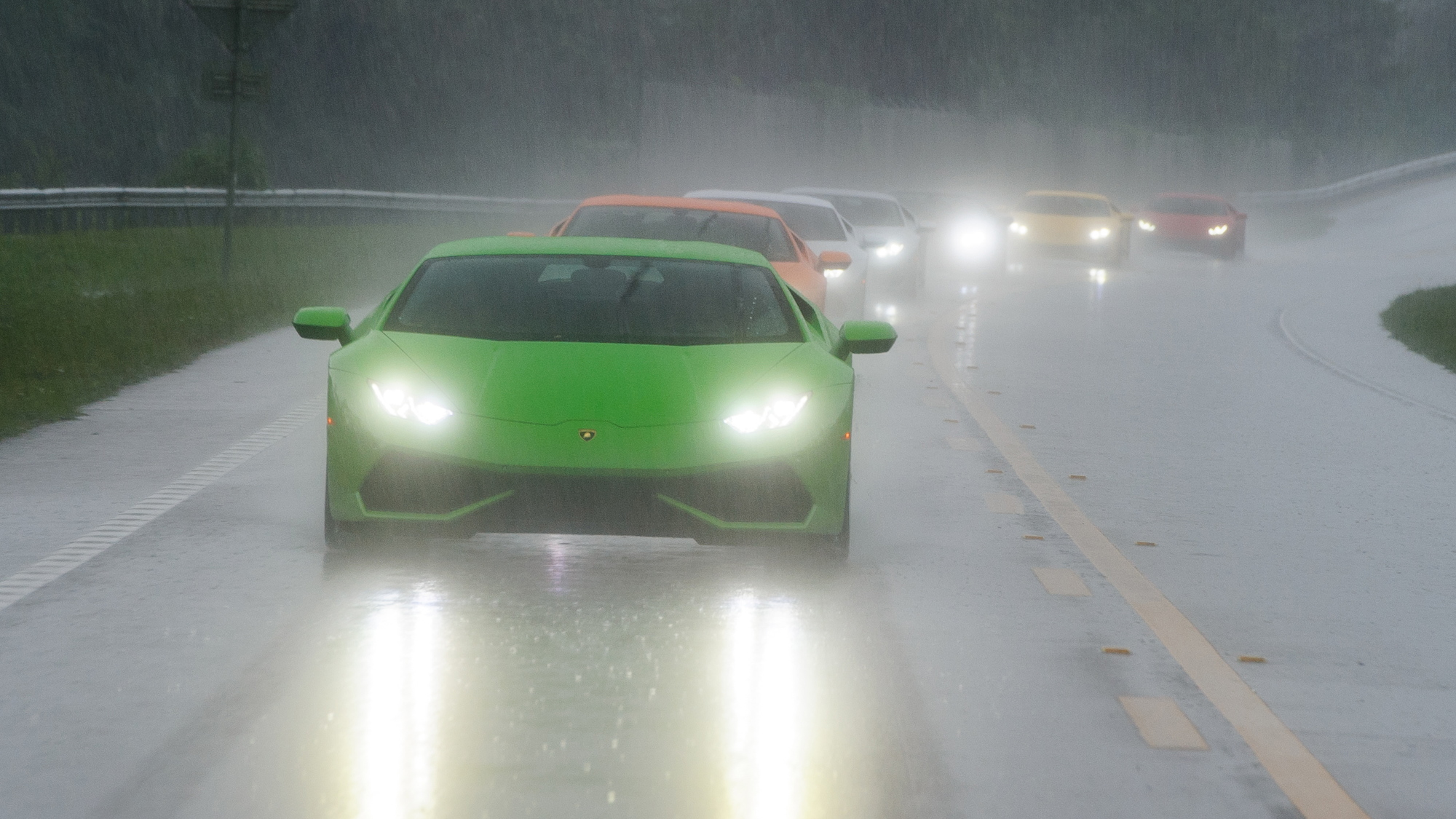 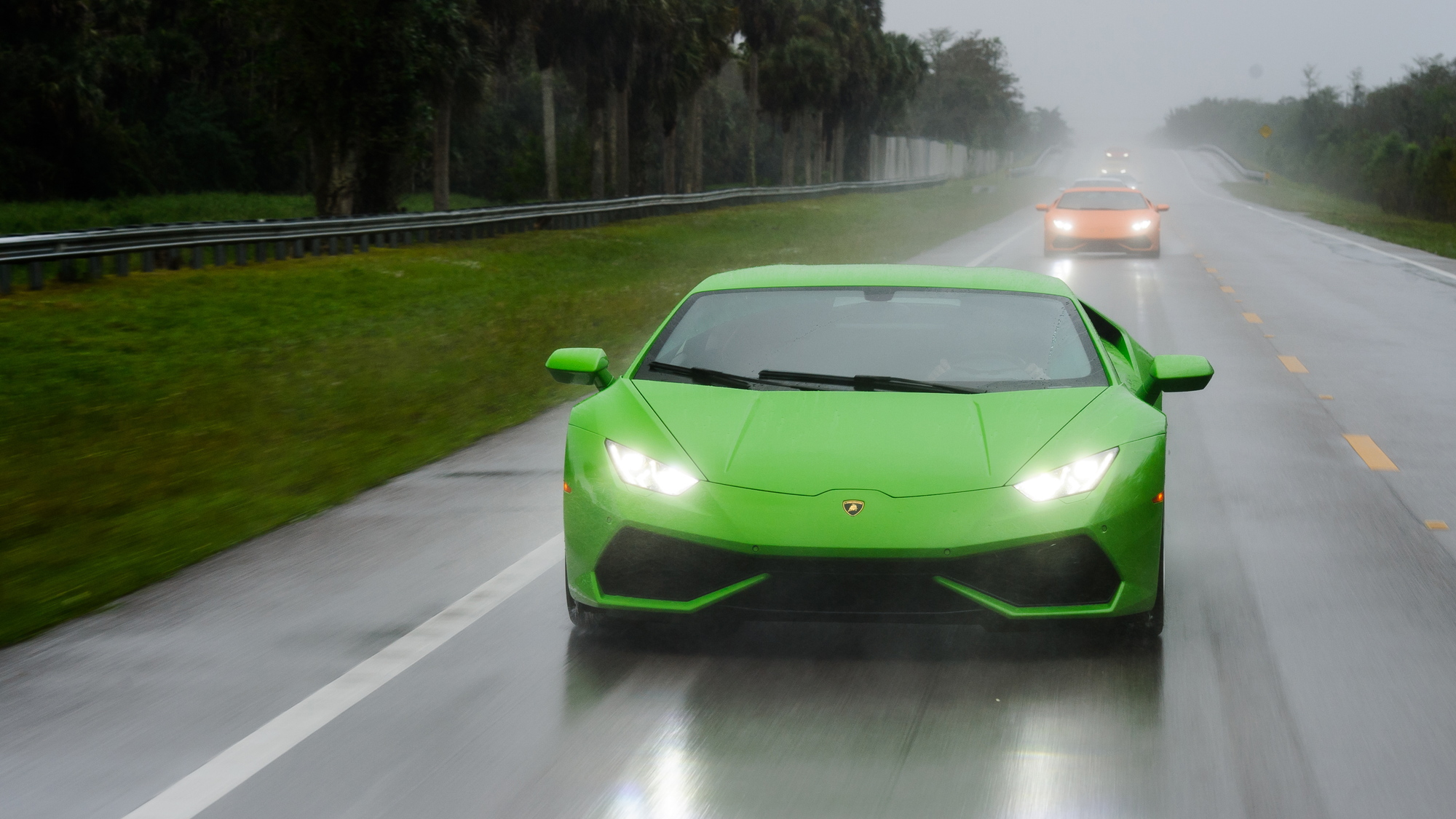 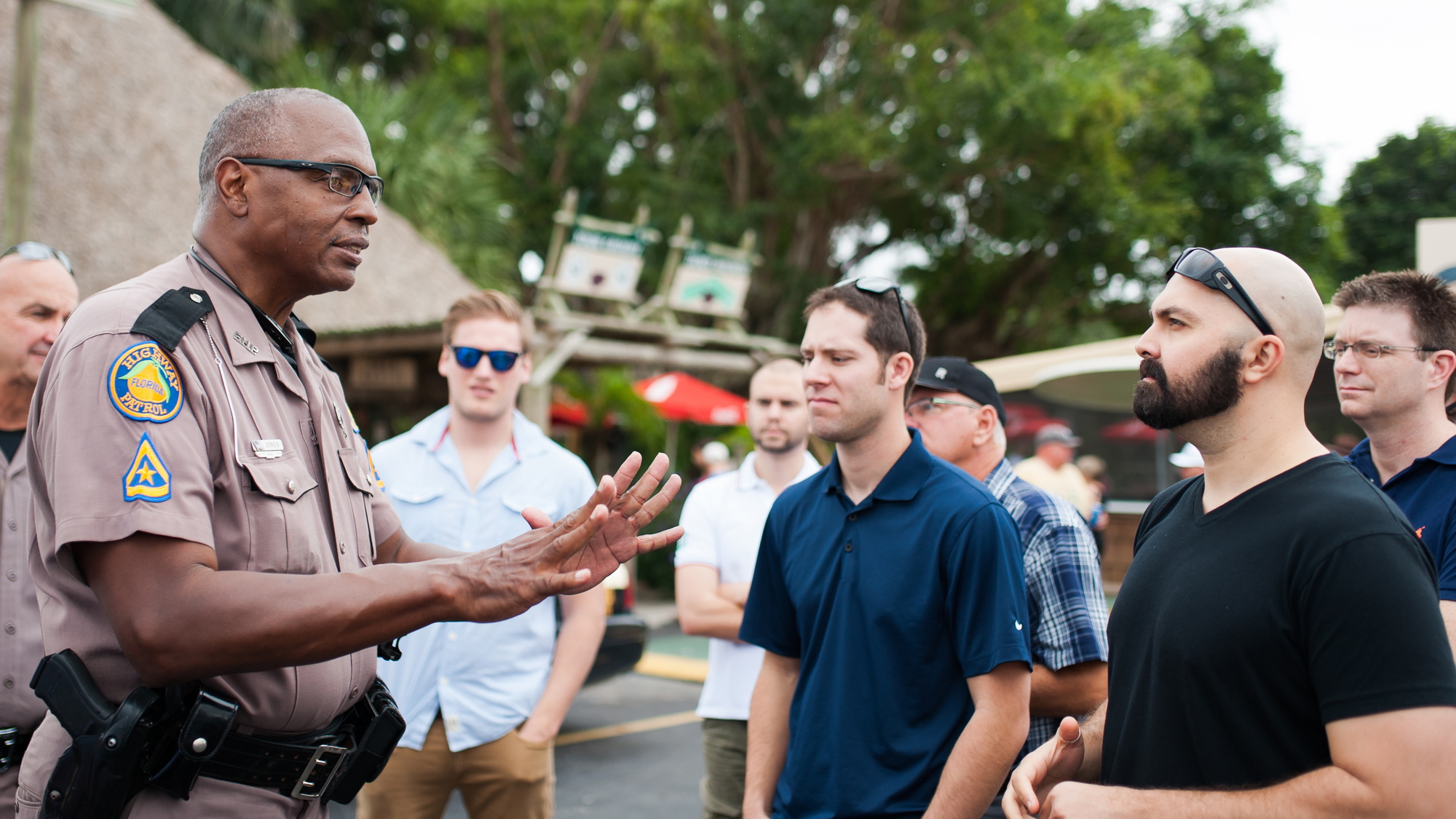 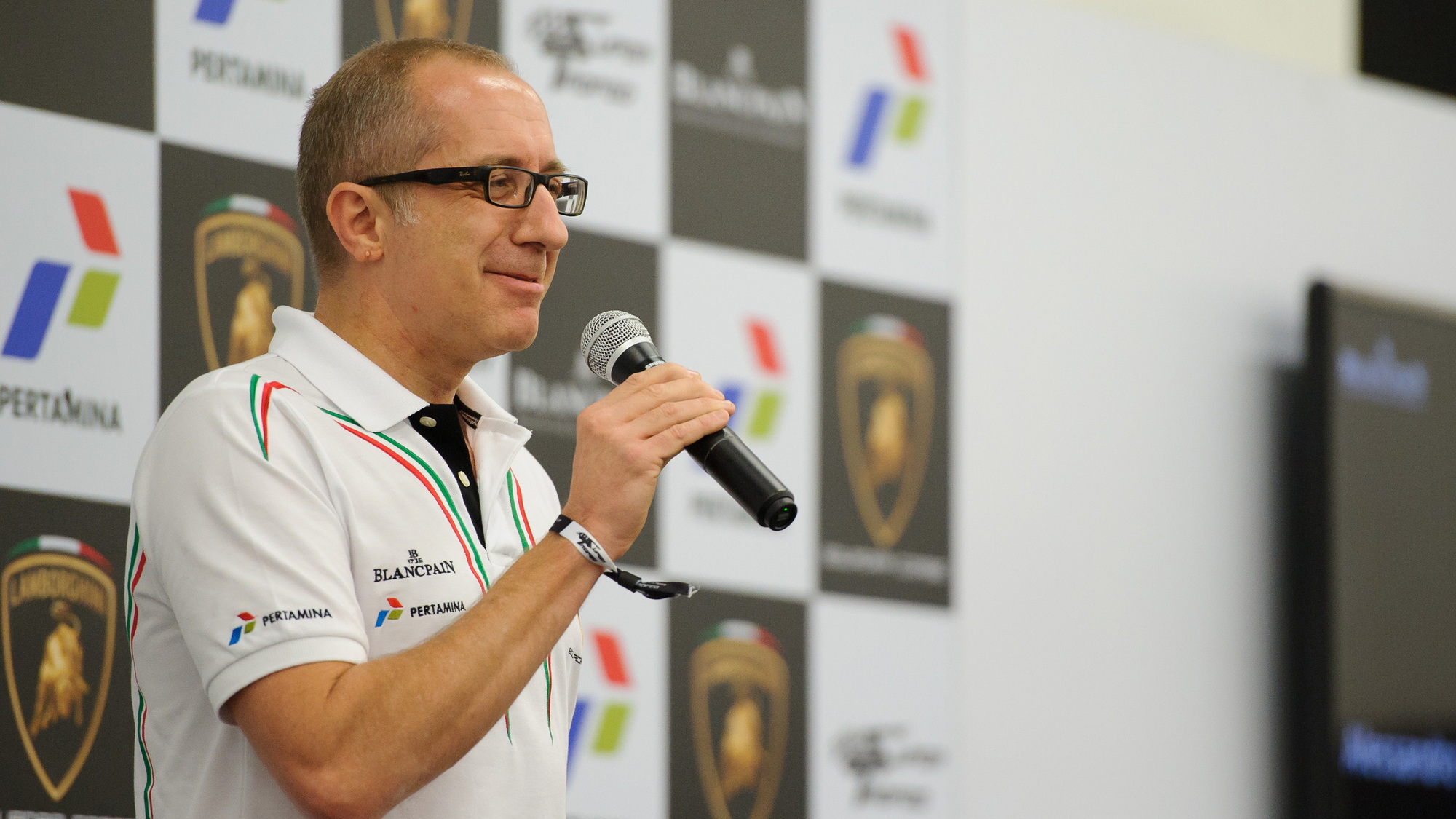 Two of the greatest words when paired together are “police escort”. On their own they can conjure up quite different emotions, but when placed side by side and in front of the phrase “while you drive this Lamborghini Huracán," add up to an absolutely brilliant sentence. Allow me to back up for a moment, as I have to explain how I found myself in this glorious position.

Lamborghini has spent the last few years running racing versions of its road cars in the Blancpain-sponsored Super Trofeo series. It all started back in 2009, when Gallardo coupes were transformed into true race cars over in Europe. A few years later, the Asian version of Super Trofeo got underway. Recently, Lamborghini expanded the series to North America.

The series has now evolved to feature the Huracán Super Trofeo and expanded to see over 80 cars all vying for Bull-based glory. It all culminates in the Super Trofeo World Finals, which brings together the best drivers from all three international Super Trofeo groups. This year's World Finals recently unfolded over the iconic bumps of Sebring.

That’s how I found myself sitting in Miami with the keys to a 2016 Huracán. My destination lied 170 miles away, and I had 601 horsepower on tap which doles itself out through all four wheels in order to live up to its LP 610-4 badging. The roads between my starting position and desired destination were straight, flat, and rather boring, even when behind the wheel of a machine designed to eliminate boring from one’s life.

I discovered a new way to eliminate potential boredom on the road, however, and it involved red and blue lights. For once in my life, they were not behind me but placed a few cars ahead of my own. The Florida State Patrol was leading a colorful convoy of Huracáns, and all the colors of the rainbow were properly represented. In fact, I think Lamborghini invented a few new shades just for this occasion.

The idea of the police convoy wasn’t to allow us the opportunity to experience Florida’s gator-filled Everglades at triple digit speeds. Instead, they joined us to provide a clear path that allowed us to reach the racing action on time. Additionally, the security company that organized the po-po protection also served as a sort of basic security force for the cars whenever we stopped along the way. After all, eight Lamborghini coupes racing across the middle of Florida are bound to attract attention that varies from “mildly interested onlooker” to “perhaps you should take a step back sir.”

Our Bullish noses were pointed to the North and to the West, as that’s where Sebring lied. The sky ahead of us was uncharacteristically ominous. Florida didn’t want us to abuse its roadways, even if we had the long arm of the law playing the position of lead blocker. Light gray skies slid down the color spectrum to darker gray skies and the world above us began to pour down with an almost detectable level of malice.

Lamborghini’s four-wheel-drive system was getting a workout on this journey. Where a wedge-shaped supercar once sat in front of us lied a wall of rain and the faintest notion of taillights. Bright colors yielded to a flat absence of color that seemed to combine the sky, the rain, and the road into one massive obstacle in the way of our date with tremendous noise and fury battling it out on the Sebring racing surface.

A press of the ANIMA button on the bottom of the steering wheel took us from Corsa to Sport. We still had the snap, crackle, and pop of the exhaust on throttle overrun, but the shift ferocity was dialed back to a realm that would ease the fears of our chiropractor. Rain continued to fall, but the “4” in LP610-4 got its chance to shine that day. Normally dry roadways were covered in water. Still, the road was straight, and the throttle was pressed deeper towards the firewall.

Eventually we arrived at Sebring. Our police escort left us to return to the business of catching those violating more important laws. We missed qualifying due to the weather, but we did arrive in time to sit down with Lamborghini CEO Stephan Winkelmann and Head of Motorsports Giorgio Sanna.

"We consider motorsports an asset and an important marketing tool", stated Sanna. The goal here for Lamborghini wasn't to develop its own factory team and then take on the world, but rather to create a car and support it across its many various customer teams. "We don't want to race against our own customers", Sanna says, and why would they when they can just sell those customers the $335,000 Super Trofeo car or the new $505,000 Huracan GT3. These cars are moving beyond their own series though, as you will see Lamborghini race cars running the next full season of the United SportsCar Championship.

Our sit down with Stephan Winkelmann went away from the meat of the motorsports, and into the heart of Lamborghini present and future. Winkelmann let it slip that active aero is coming for the street cars, and it's a fact he revealed a bit prematurely. It's something that speaks to the shift Lamborghini sees with regards to supercars. Gone are the days when outright top speed was king. There's a desire for supreme drivability and aerodynamics, alongside power-to-weight ratios, playing a superior role in making that happen.

There's also that matter of the upcoming third model in the Lamborghini lineup. The Urus SUV is nearly ready for prime time, and it's certainly going to help Lamborghini increase its volume. It's such an important vehicle that Lamborghini is nearly doubling the size of its company just to build it. Winkelmann stated that "This is a massive effort with a new facility, and it's initially more expensive to produce than the other two models put together." When pressed about the possibility of a sedan in the future, Winkelmann said that getting through the third model is important before eyeing the possibility of a fourth. The Urus arrives in 2018 and will fall in the price range of the Huracán. Expect it to come packing a twin-turbocharged 4.0-liter V-8 engine, and you can also expect 50 percent of future Lamborghini sales to be comprised by the Urus.

After our adventurous cop-assisted trek across the middle of Florida and sit down with Winkelmann and Sanna, we got some rest before waking up to take in the Super Trofeo World Finals. If you think a street Lamborghini is an aggressive machine, you should see one that’s focused on racing. Vents seem larger. Dive planes are poised to fight the wind like a samurai ready to face down whatever army dares charge against him. The massive rear wing, which proudly proclaims the Blancpain lettering, has the task of keeping the 5.2-liter V-10 engine shoving the ass end of the car into the rough pavement.

The action on the track is loud and fast, with the pack-leading drivers reaching speeds around the 180-mph mark on the back straight of the Sebring circuit. From there it’s a sweeping right hand turn that leads the drivers back to the start-finish section of the track. This is where Patric Niederhauser took the top spot on the final day, but Spanish-born Patrick Kujala claimed the overall victory for the pro season. Kujala claimed the title in the European Super Trofeo finals as well, so his hardware room is getting a bit full now. Ryan Ockey claimed the Amateur World Final top spot, and racer Corey Lewis nabbed the Pro-Am class victory.

Next year, the Super Trofeo season comes back for another run. There’s an Asian series, European Series, and the North American season. When the season winds down next year, the World Finals will take place in Valencia and a new Blancpain victor will be crowned. For now, Kujala can hang his head high as the pro-class champion, and he can hang a trophy on his mantle.

A new season looms though. Cars are already being prepped. Driver spots are being filled. Plans are being crafted on how to hang for another year while running with the bulls.