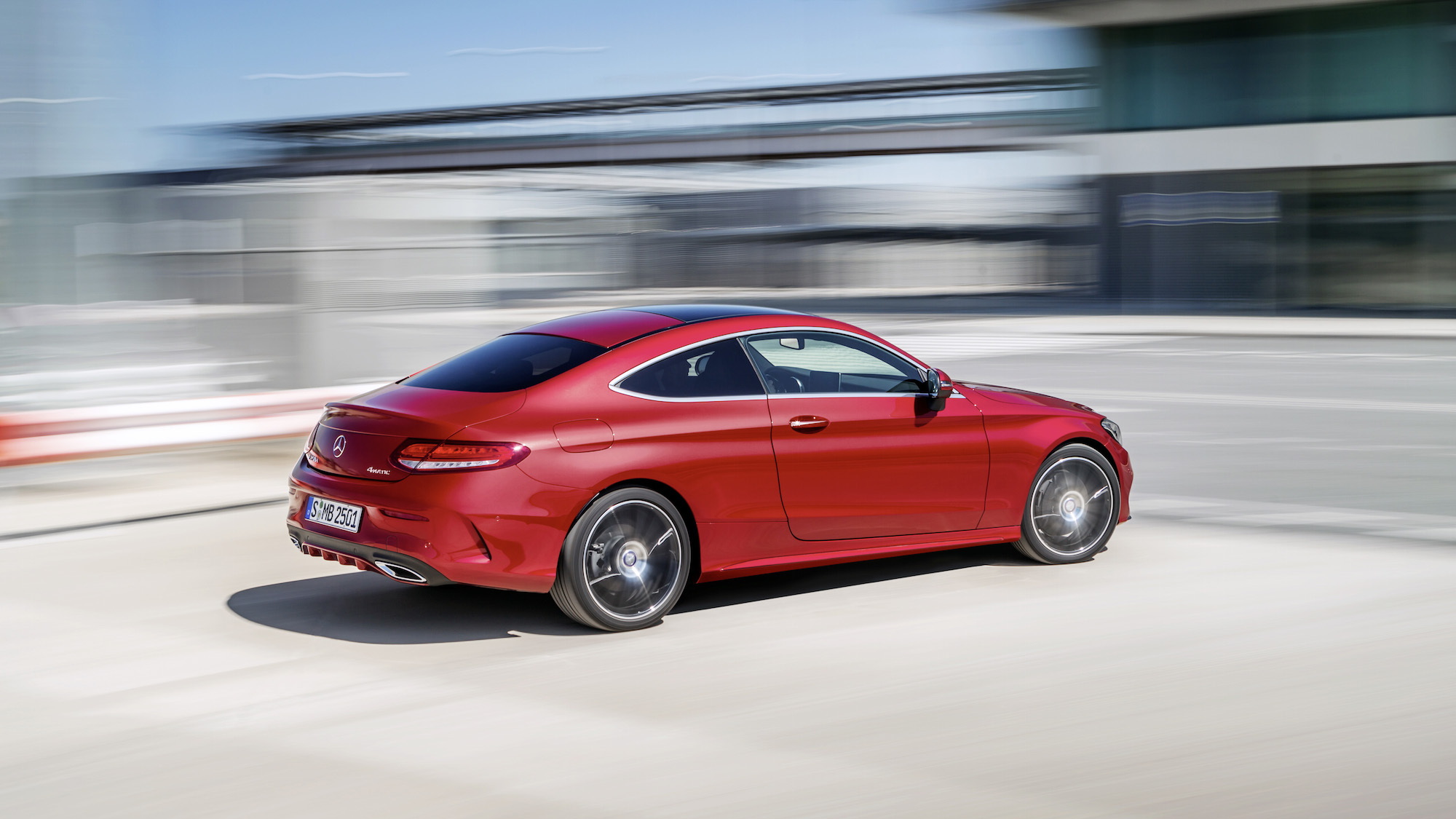 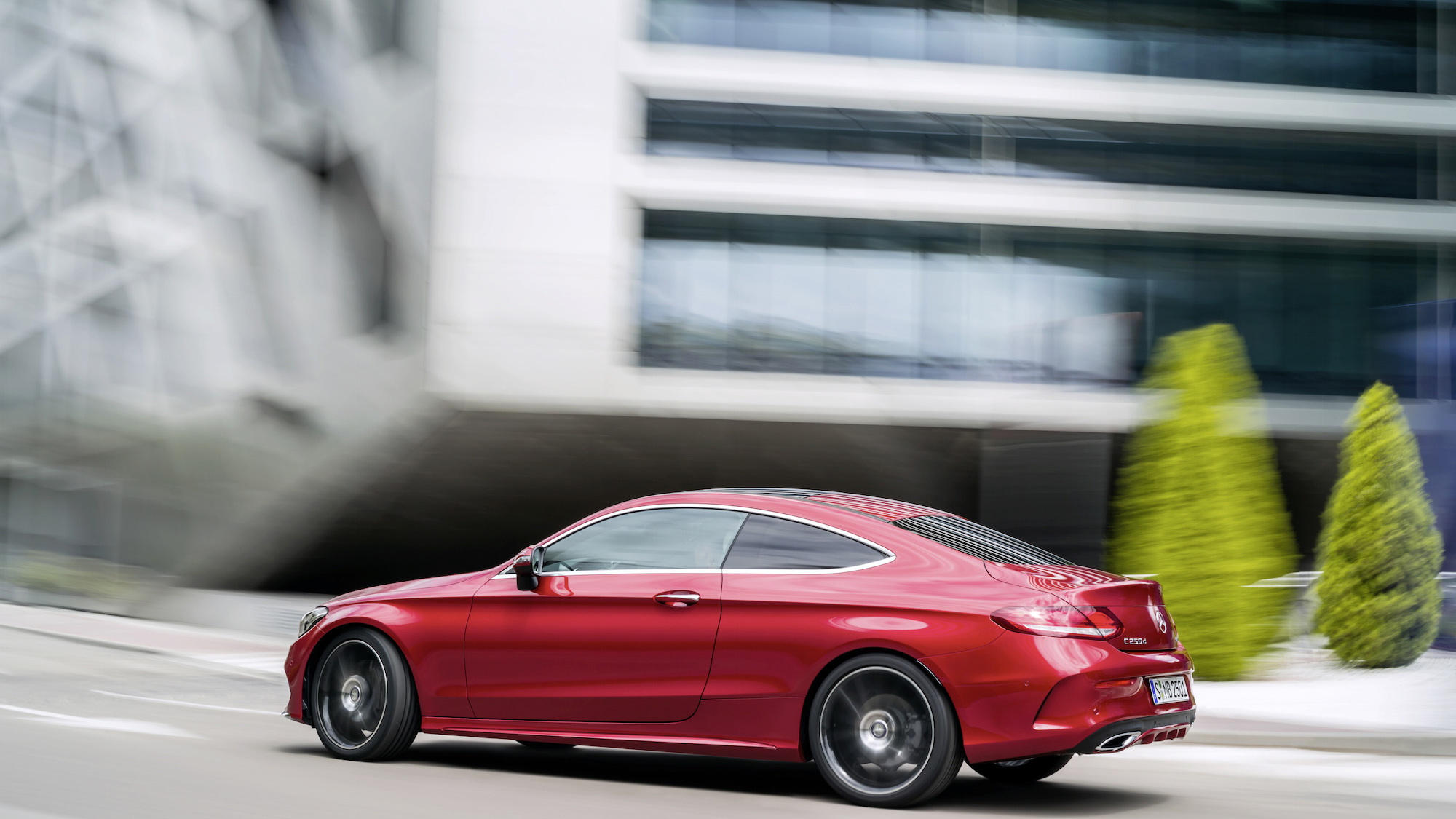 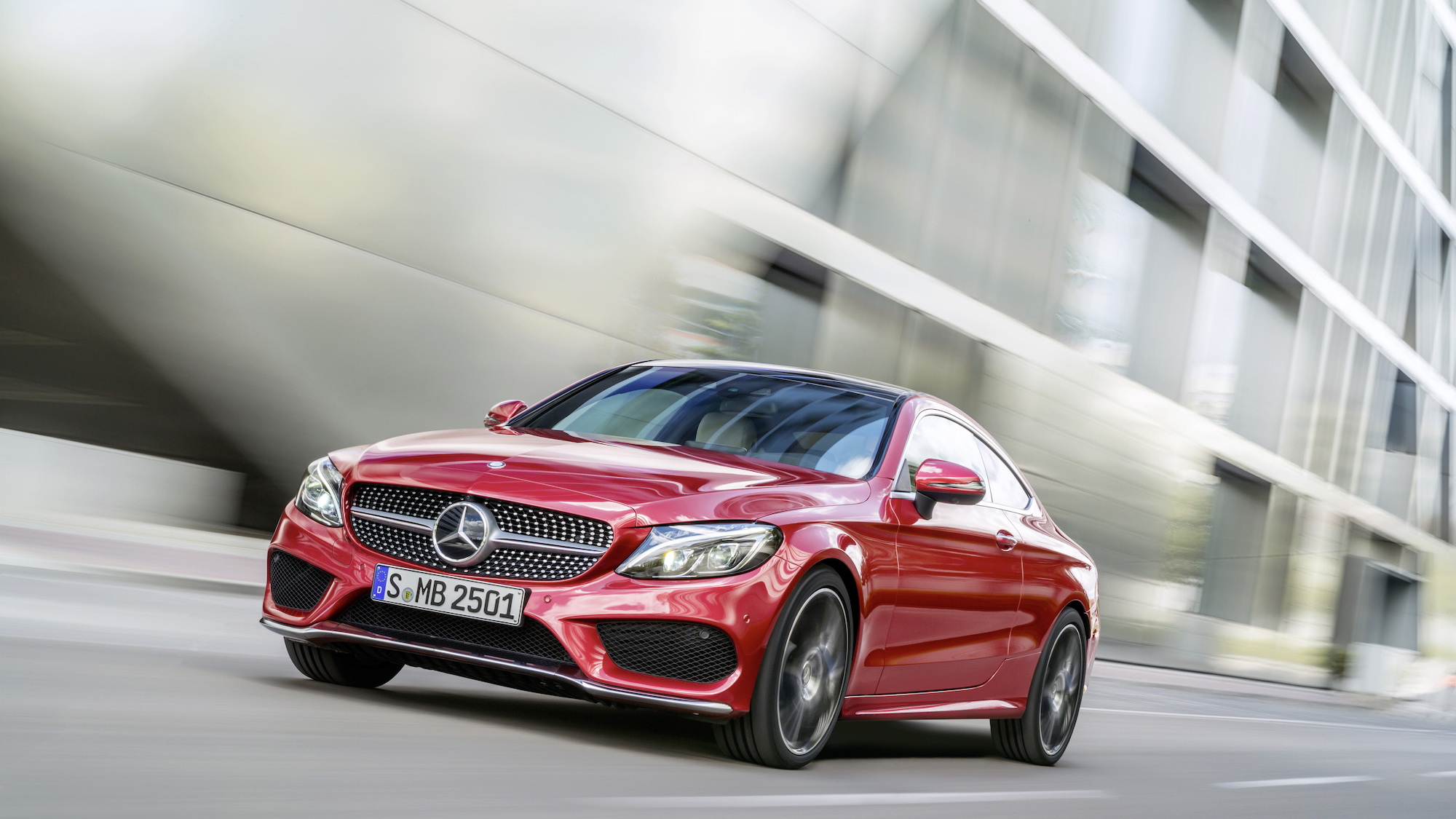 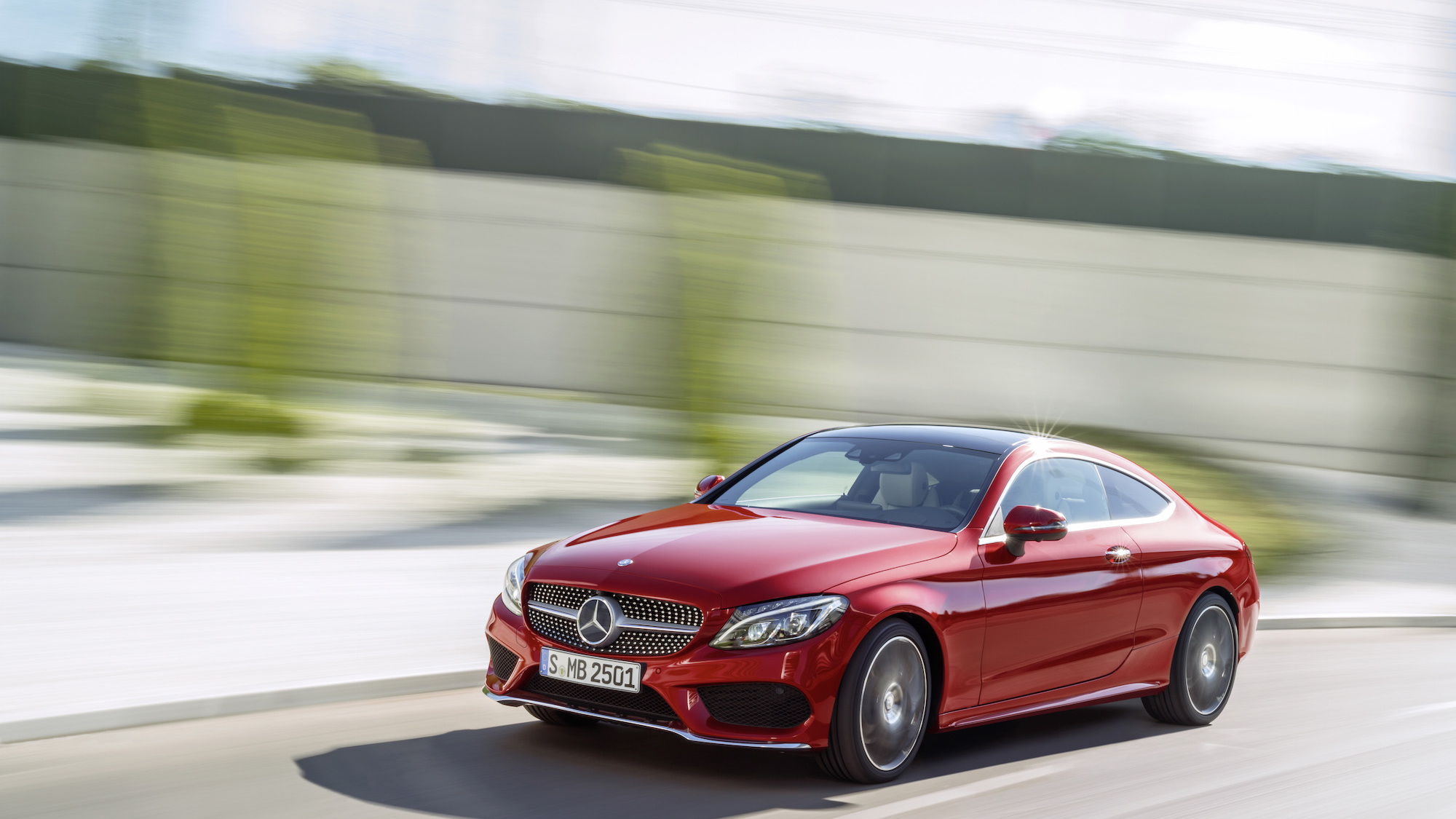 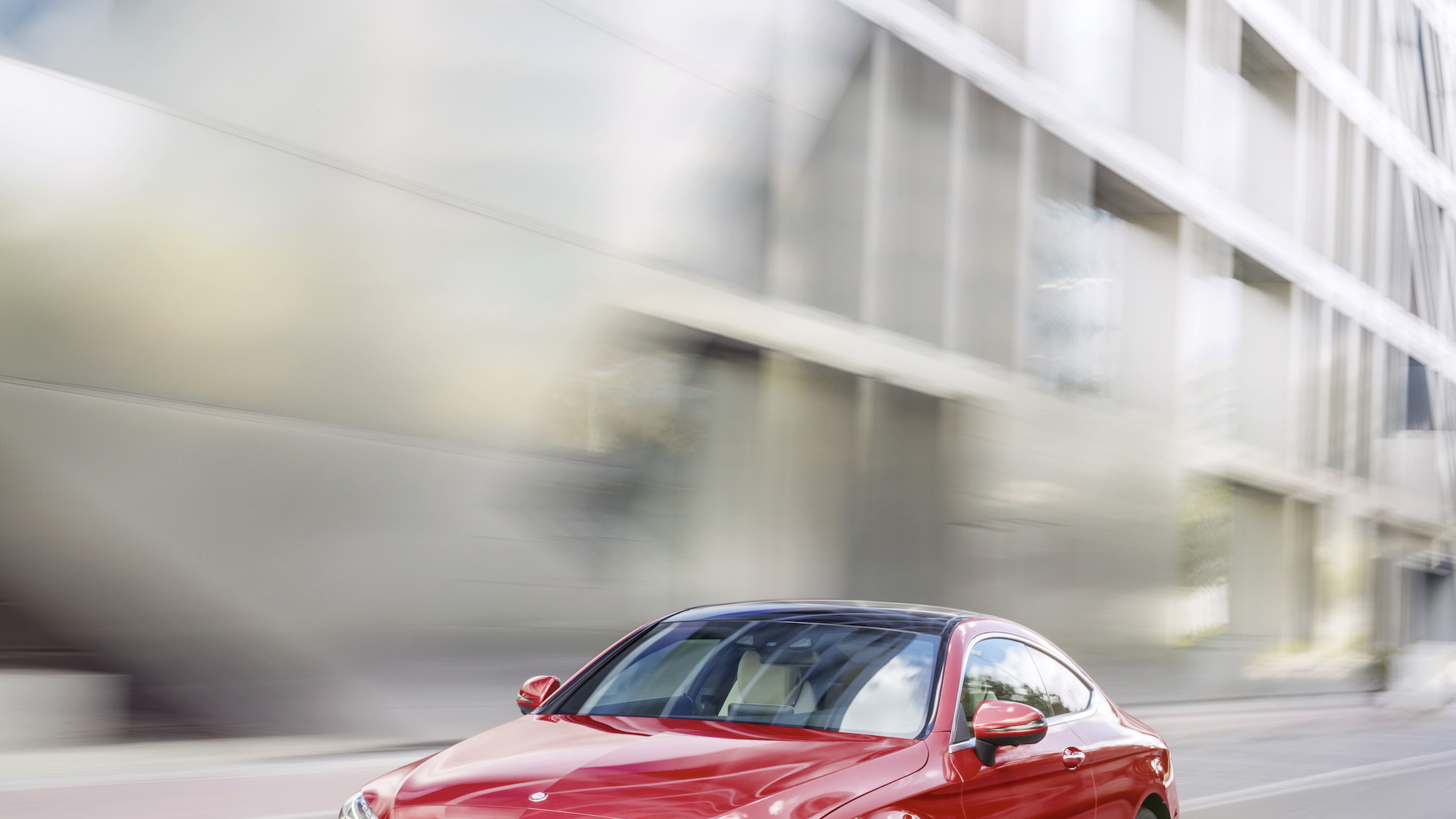 Mercedes-Benz’s latest-generation C-Class sedan has been winning accolades—and buyers’ hearts—all over the globe since arriving on the scene last year. Now the handsome looks, plush interior and impeccable engineering have been packaged in an even sexier two-door body. Yes ladies and gentlemen, the new Mercedes-Benz C-Class Coupe has arrived, and it’s set to make a huge impact in the luxury coupe segment.

Due in local showrooms next spring, as a 2017 model, the new C-Class Coupe matches the look of the stunning S-Class Coupe but should be priced at less than half that of its big brother. The C-Class sedan starts at $40k, and we expect the coupe to start a few grand above that figure.

The car launches in the United States in just two derivatives: C300 and C300 4Matic. Both come with a turbocharged 2.0-liter four-cylinder engine delivering 241 horsepower and 273 pound-feet of torque, and both feature a seven-speed automatic transmission. The C300 sticks with rear-wheel drive while the C300 4Matic gets the added traction of an all-wheel-drive system.

Based on Mercedes’ MRA modular platform for rear-wheel-drive autos, the new C-Class Coupe should be lighter than the outgoing model, meaning improvements in key areas such as acceleration, braking, handling and economy (performance numbers will be revealed at a later date). The car is also bigger than its predecessor: length is up by 3.7 inches and the width is up by 1.6 inches. This results in increased space for the driver and front passenger in particular, though there is more shoulder room, elbow room and headroom for all occupants.

In designing the car, it wasn’t just a matter of taking the sedan and dropping the rear doors. To underscore the coupe’s sporty disposition, the suspension is 0.6 of an inch lower, making it a very sporty proposition when combined with standard 18-inch wheels. Air suspension is available for both axles, and there’s also the Dynamic Select system that allows the driver to adjust a number of vehicle dynamic settings ranging from “Eco” to “Sport +” modes.

The interior will be familiar to anyone that’s been in the sedan. A seating system including sports seats designed specifically for the coupe offers sporty comfort, while the standard automatic belt feeder offers additional convenience. The interface is Mercedes’ COMAND system which includes a large display screen located on the dash. A sports package is available and adds things like a flat-bottomed steering wheel and alloy pedals for the interior, and a body kit and light alloys for the exterior.

The C-Class Coupe features a wealth of equipment as standard, including LED headlights, Pre-Safe braking, keyless start, and a panoramic sunroof. There is also a long list of electronic safety features and driver aids. Some handy items are the semi-automated parking assistant, 360-degree camera system, and the semi-autonomous Distronic Plus with Steering Assist adaptive cruise control system.

That last item can adjust the speed of the vehicle in line with a slower-moving vehicle ahead in a speed range from 0-124 mph if required. And also between 0 and 124 mph, steering intervention helps the driver stay in lane. And at speeds below 81 mph, for example in traffic jams or when driving bumper to bumper, the system can follow the vehicle ahead even where there are no or unclear lane markings.

More details on the 2017 Mercedes-Benz C-Class Coupe will be released in the lead up to the car’s debut September 15th at the 2015 Frankfurt Auto Show. Also present at the show will be the high-performance variant from Mercedes-AMG, the new C63 Coupe. Convertible fans can also look forward to a new C-Class Cabriolet at some point.