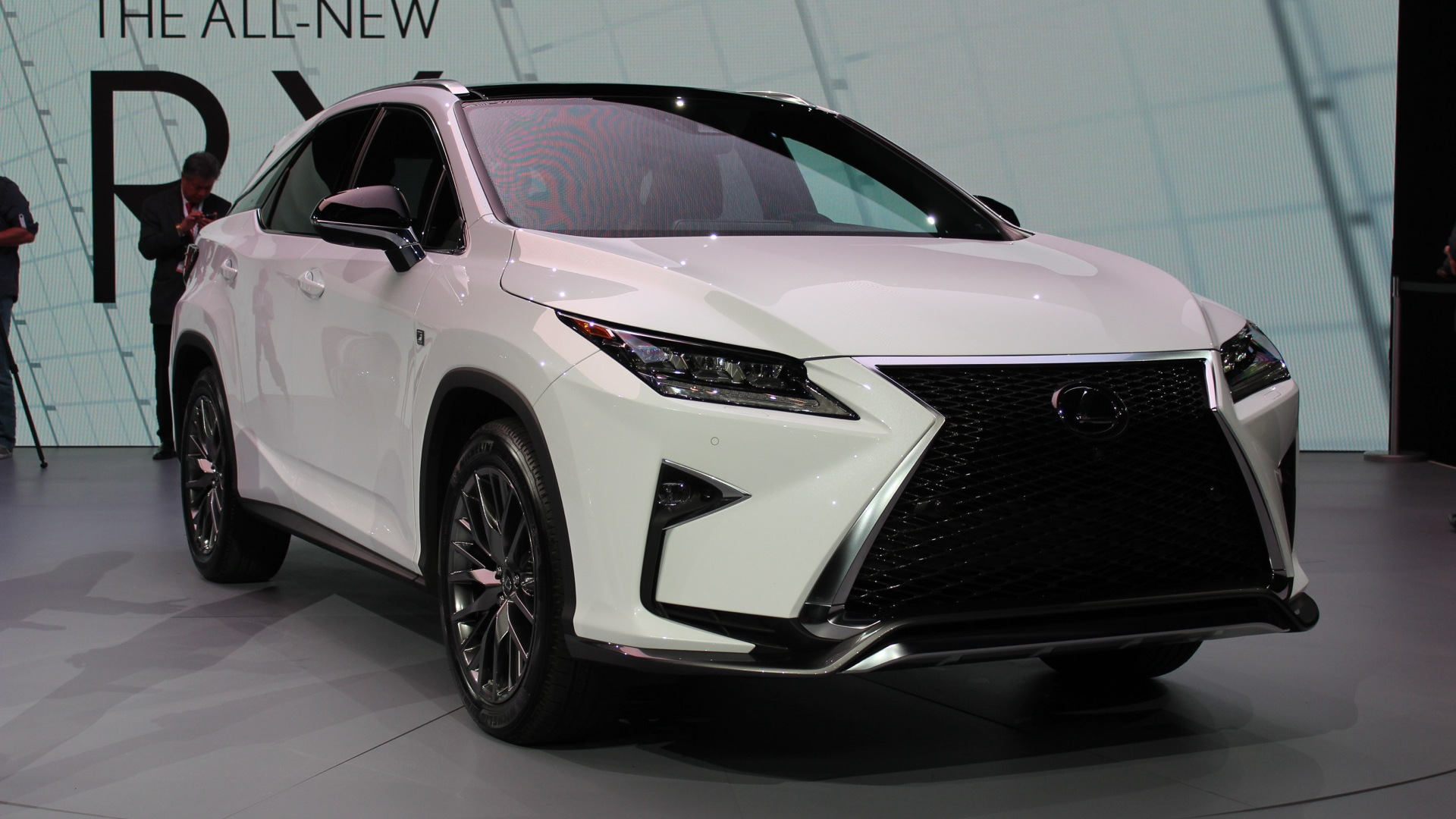 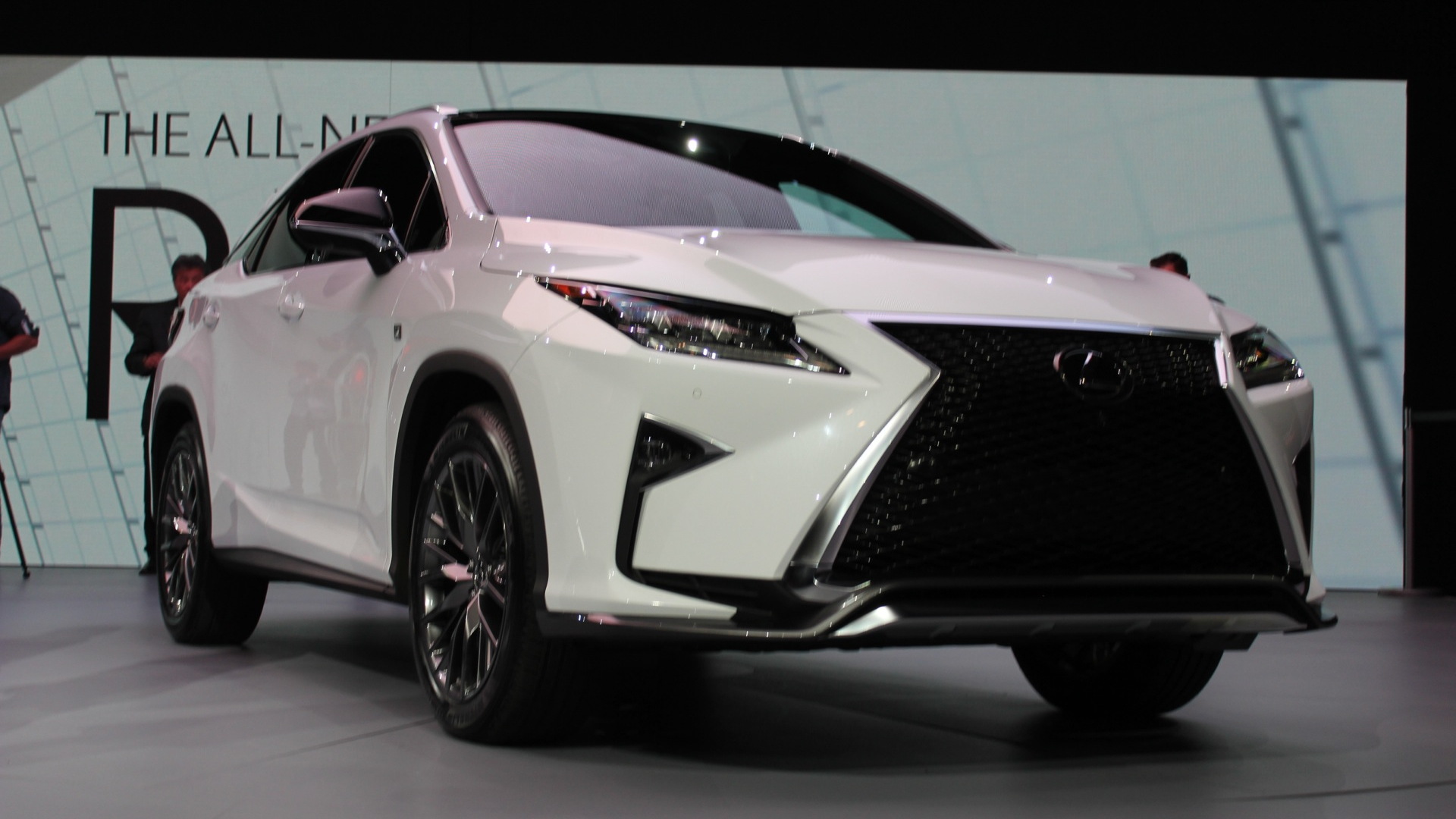 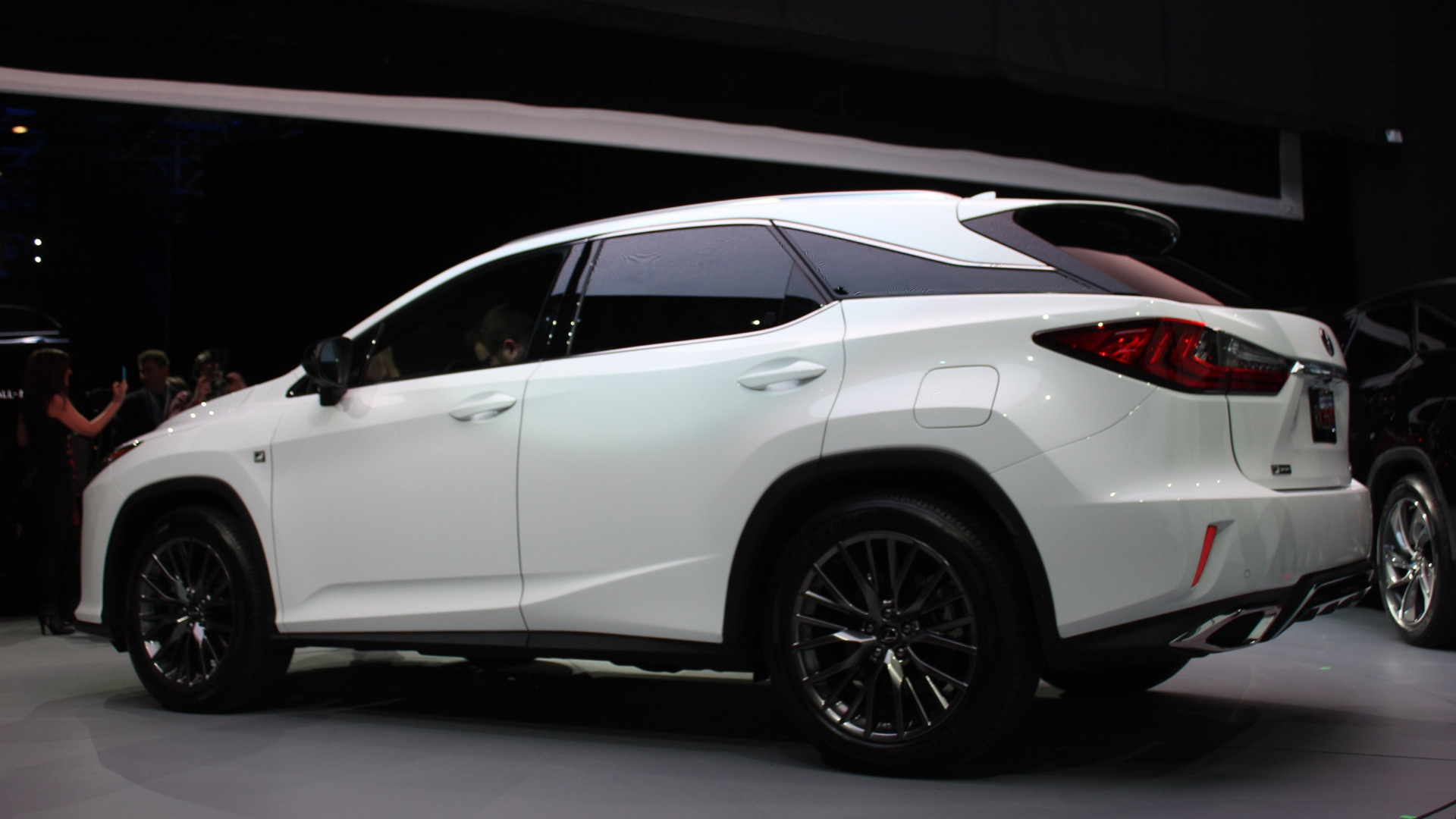 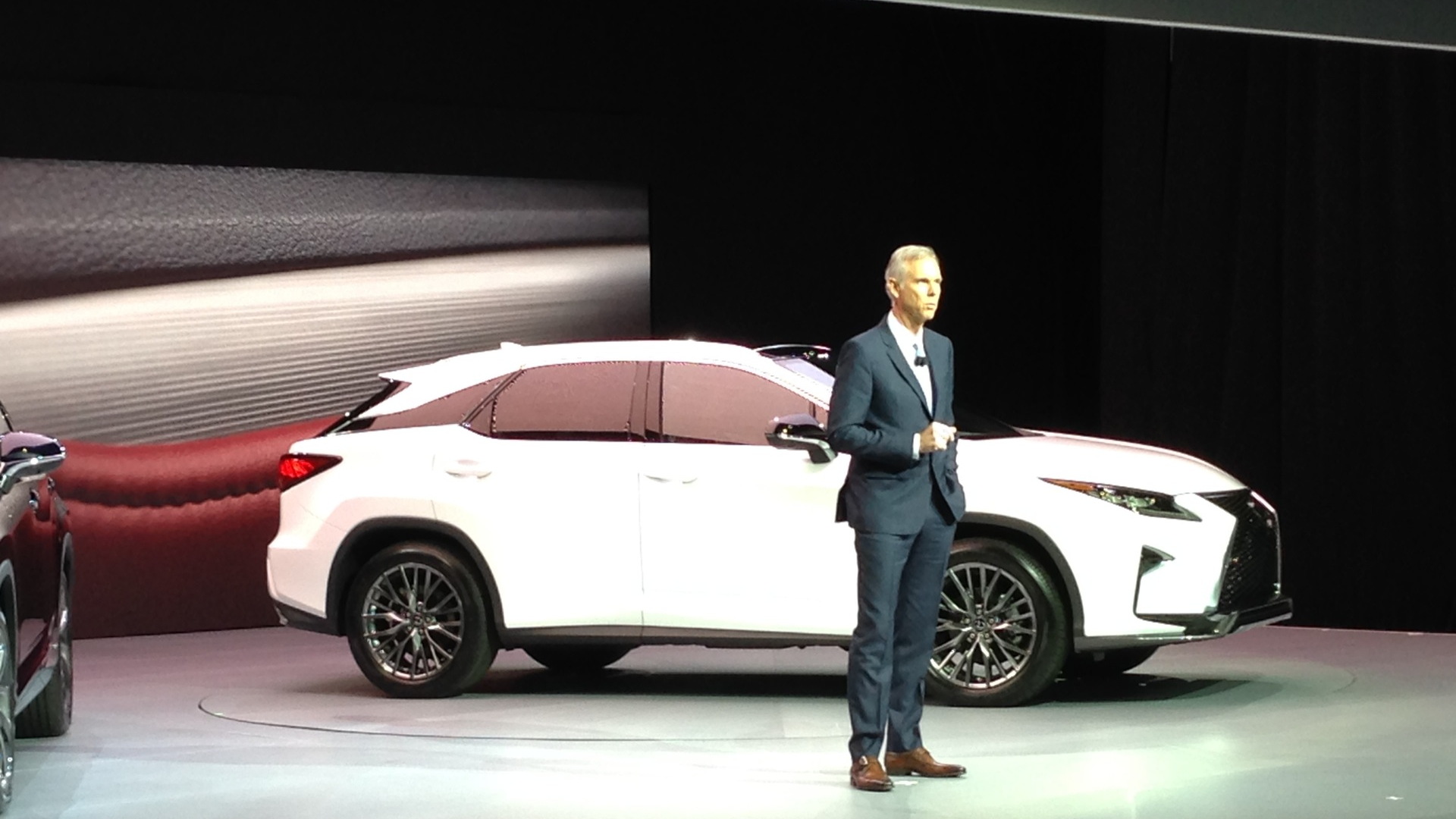 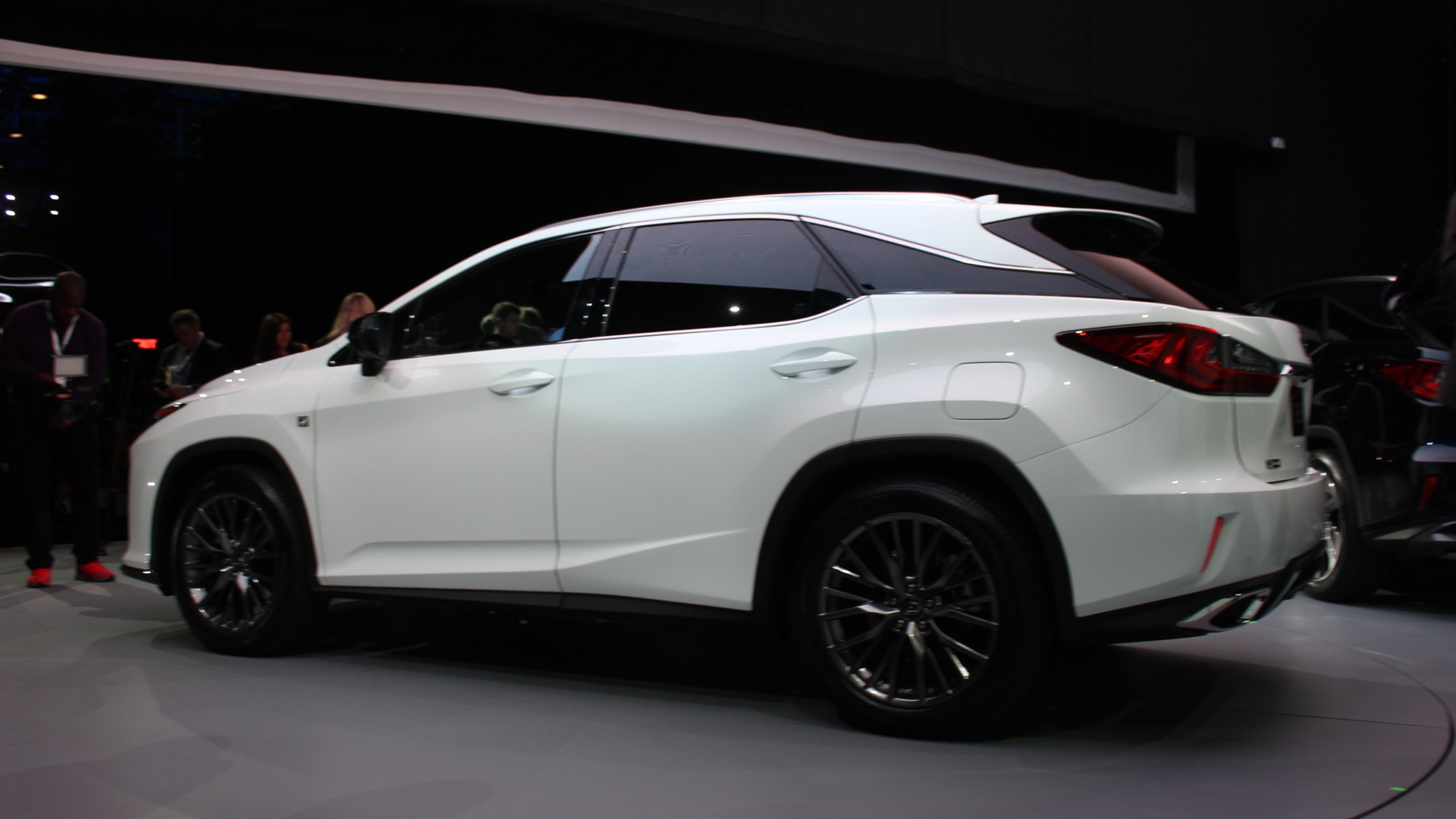 Lexus has unveiled a much more aggressively styled RX SUV at this week’s 2015 New York Auto Show. The RX nameplate is a significant one for Lexus, with three out of every 10 of the brand’s vehicles ever sold being one of the family-friendly SUVs, yet the design team has been brave enough to introduce a fresh, chiseled bodystyle for the fourth-generation model that we’re sure will polarize buyers.

Moving inside, the designers have kept a conventional dash layout but there are some key changes implemented to emphasize the vehicle’s athleticism. For example, the gear shift lever, complete with leather boot, has been positioned away from the front of the instrument panel to optimize operation and create more space for the driver. There’s also an available head-up display and a digital tachometer just like in the LFA supercar.

Rear-seat occupants are treated to more leg and knee space than in the previous RX, and buyers can now opt for a panorama moonroof for the first time. Rear seats have a 60/40 split, and there’s also a rear-seat entertainment package that features dual screens affixed to the back of the front headrests.

The vehicle’s underpinnings are shared with those of the latest Toyota Highlander, and we may see a seven-seat option on offer at some point. Thanks to increased use of aluminum in its construction, the new RX should be lighter than the outgoing model. It should also be stiffer as engineers have fortified the body structure to provide enhanced straight-line stability and control through turns.

The RX’s fully independent suspension system, which consists of MacPherson struts up front and a double wishbone setup at rear, has been tuned and reinforced to enhance handling, and is further enhanced by a new system dubbed “AVS”. This electronically monitors and adapts the shock absorber damping and steering to help ensure optimal handling and ride depending on the driving conditions. The system is also designed to produce less body roll through corners. Other electronic chassis systems include standard Vehicle Stability Control (VSC) and available Vehicle Dynamics Integrated Management (VDIM), both of which help mitigate potentially dangerous situations with automatic and often transparent adjustments.

The new RX goes on sale later this year, as a 2016 model. There will be two variants at launch: RX 350 and RX 450h. The RX 350 is powered by a 3.5-liter V-6 which the automaker says should deliver 300 horsepower. The RX 450h is a hybrid and features an Atkinson-cycle 3.5-liter V-6 working in conjunction with an electric motor. This model is also expected to deliver approximately 300 hp. The transmission is an eight-speed automatic, and customers will have the choice of front- or all-wheel-drive configurations.

Customers will also be able to select an F Sport package for either variant, though only when all-wheel drive is also selected. The F Sport package adds a number of visual and performance tweaks such as 20-inch wheels with a graphite finish, an active stabilizer system and some “F” badged items in the cabin.

One final tidbit Lexus has revealed is a new safety package called the “Lexus Safety System+”. Debuting on the 2016 RX, Lexus Safety System+ groups a number of electronic driver aids such as Pre-Collision System, Lane Departure Alert, and Automatic High Beam, as well as Dynamic Radar Cruise Control. A millimeter-wave radar unit and a new camera are included to enhance performance. Parent company Toyota gets its own version of the system called “Toyota Safety Sense".