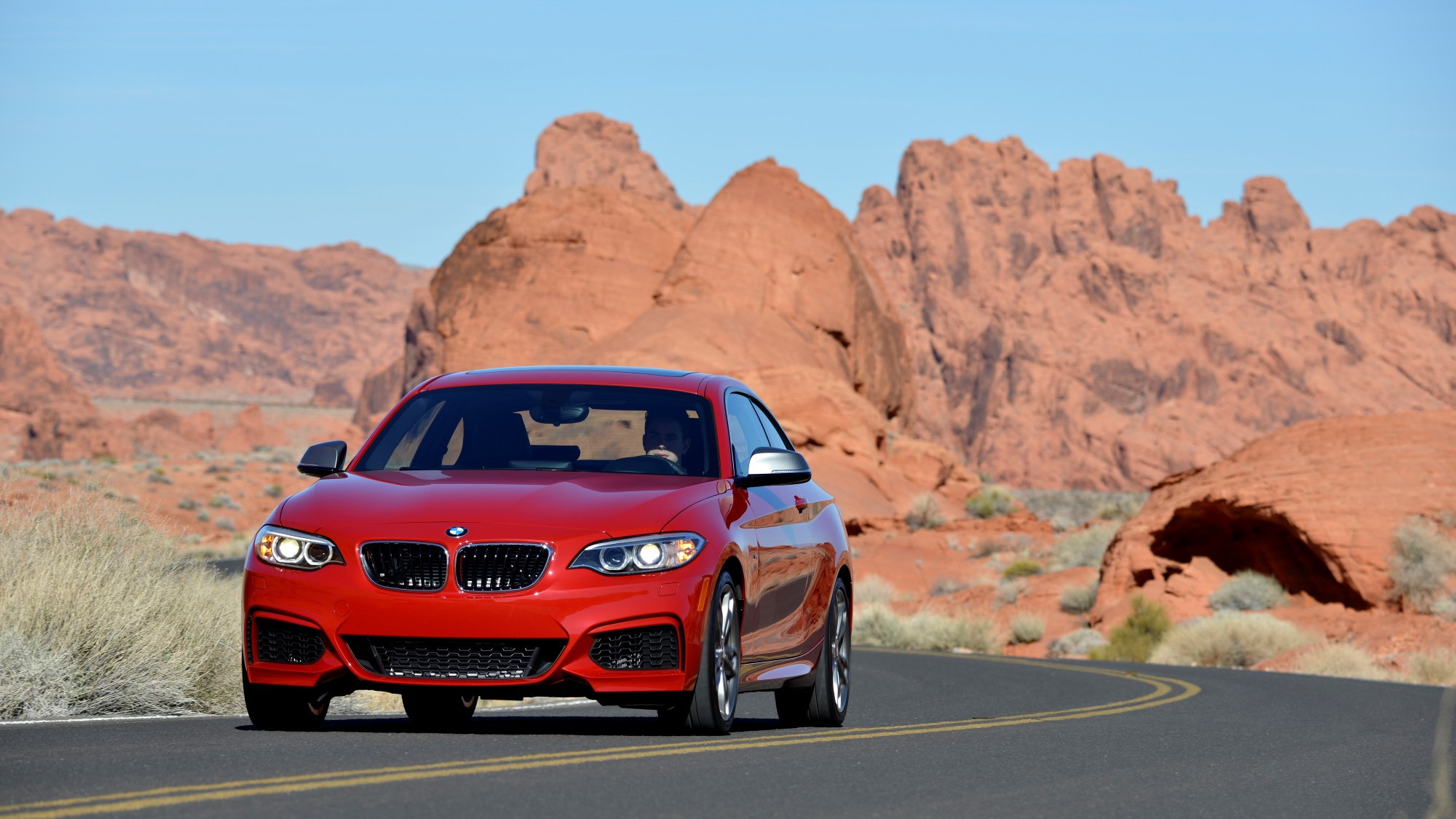 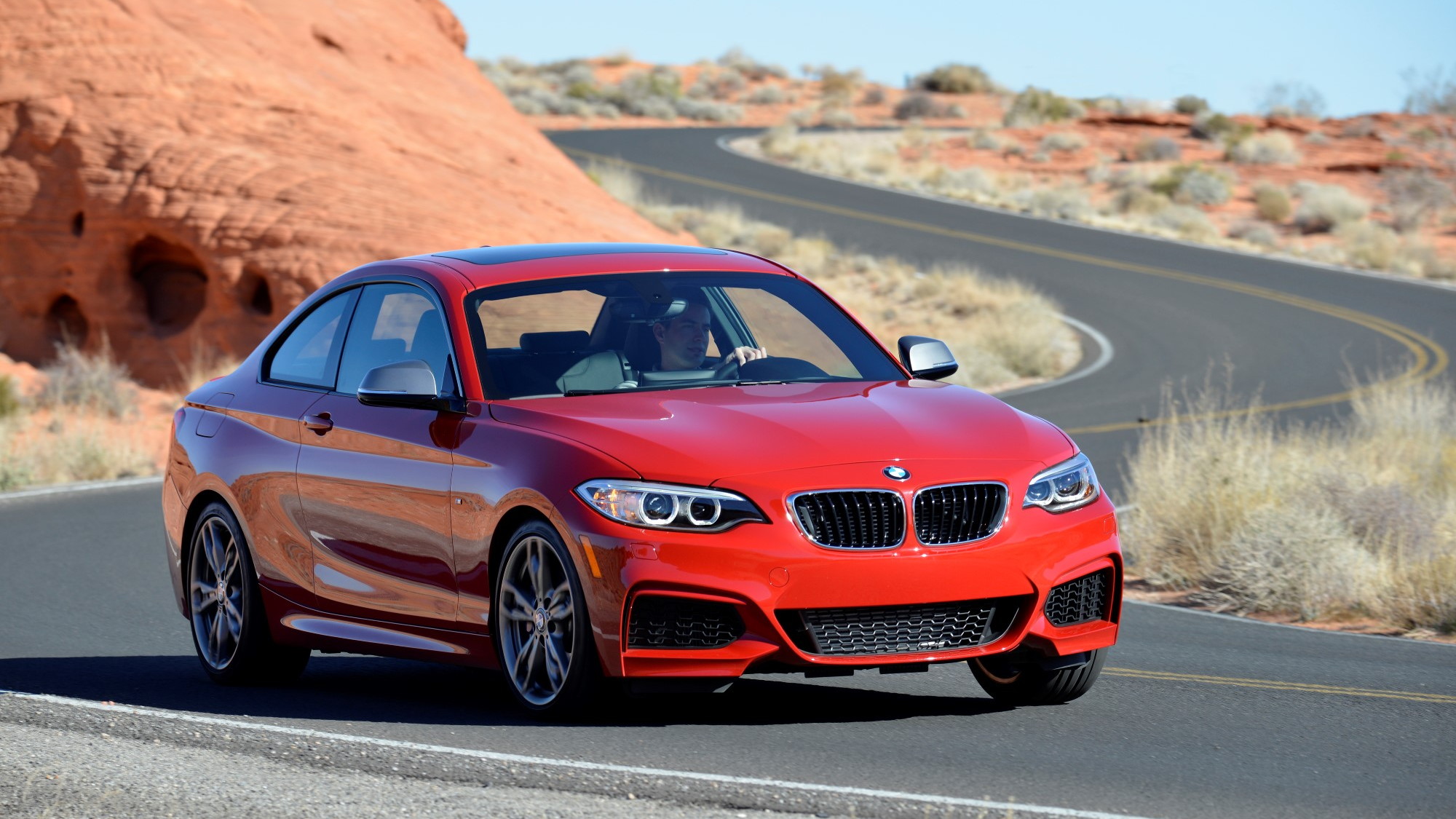 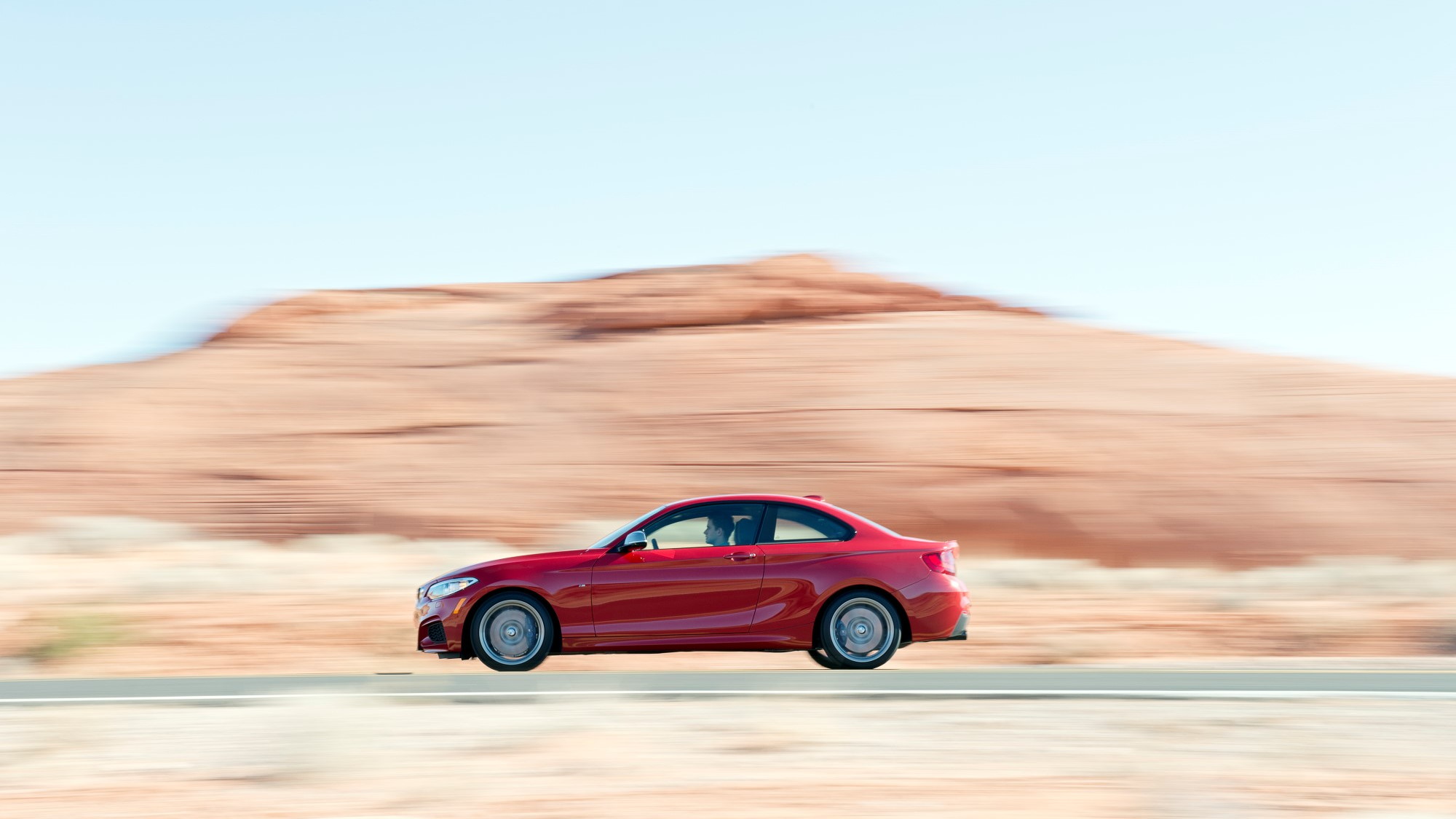 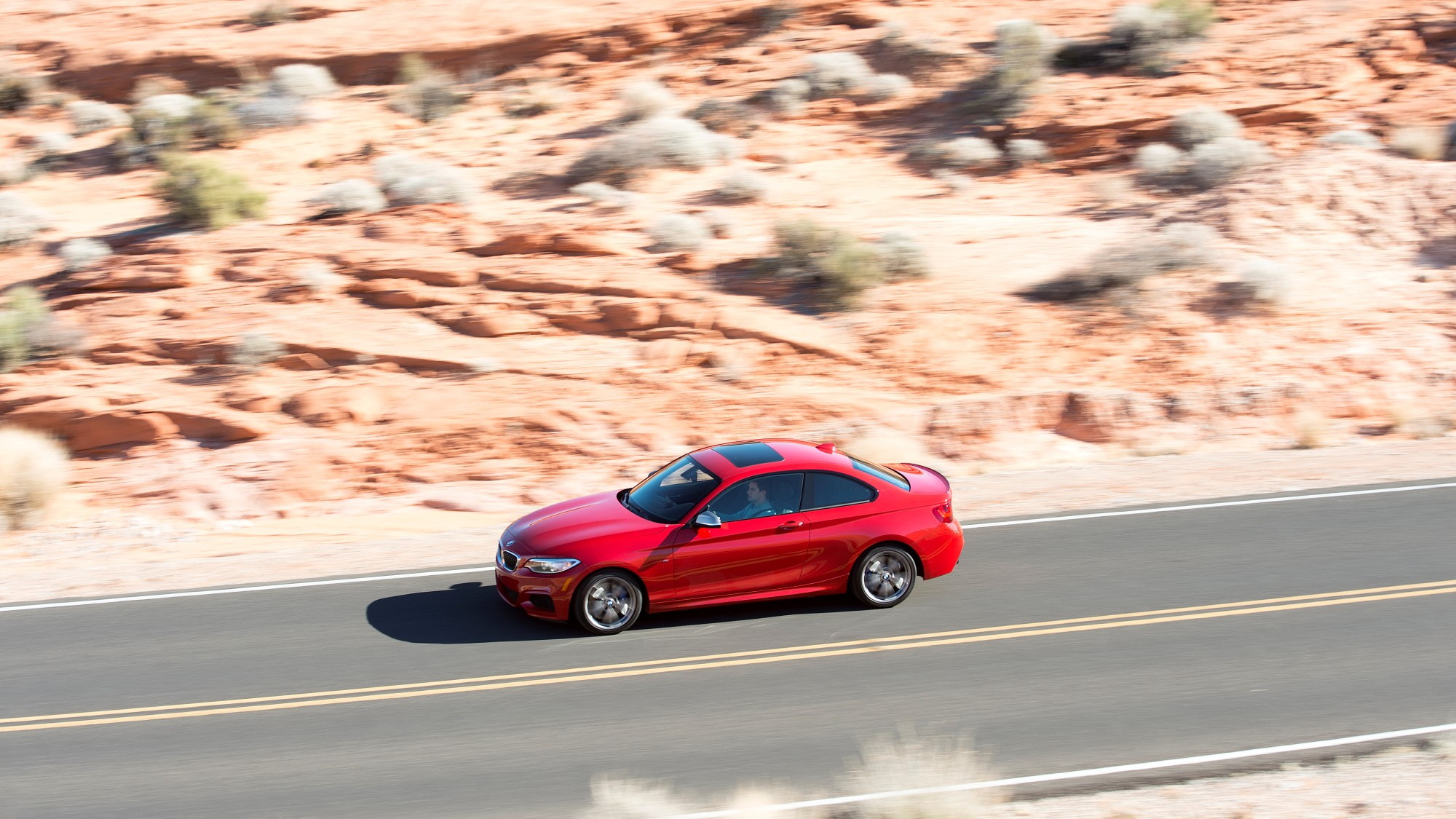 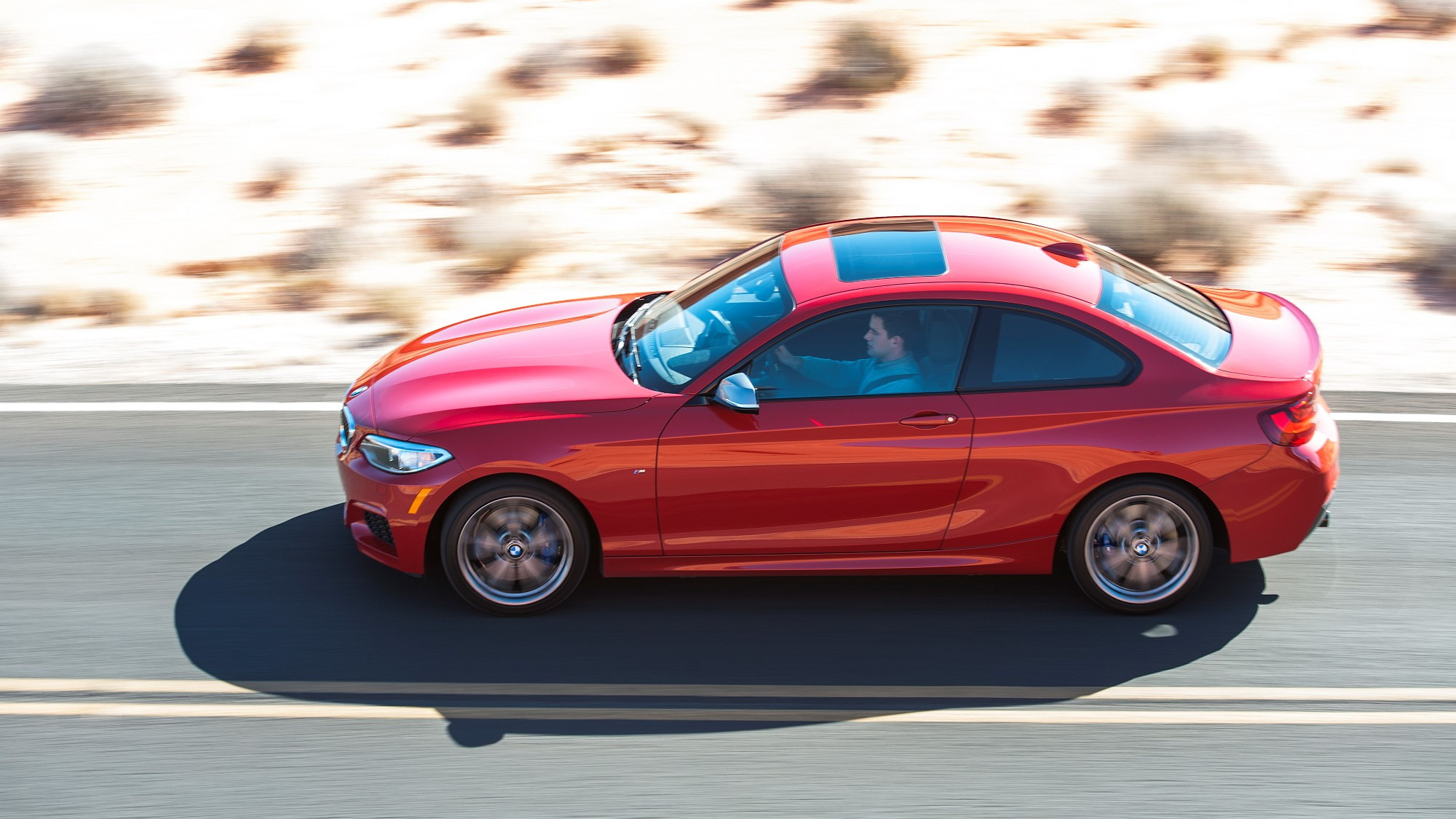 The BMW 1-Series is no more. Nope. It’s been replaced, by this: the new 2-Series. It’s longer, wider, and roomier, and a little more expensive—but with the turbo six, it’s as close to a classic M3 as you can get.

Let’s start under the hood. You’ll find either a 2.0-liter turbocharged four rated at 240 horsepower, or our tester’s turbocharged 3.0-liter in-line six rated at 320 horsepower. Both can be had with either a six-speed manual or an eight-speed automatic, and that automatic isn’t bad. Both are strong engines, but as you’d expect, this turbo six is the one we’d choose.

It doesn’t matter which engine you choose, both are pretty fuel-efficient. The turbo four comes in at up to 35 mpg highway while the turbo six gets up to 32 mpg highway.

To us, this is what the F30 3-Series should have been, at least as far as the balance between pose, ride, dynamics, and feel goes. It’s just an incredibly well-sorted little sports coupe.

Unlike most modern BMWs, the M235i doesn’t come with run-flat tires. This smooths out the ride considerably on the street, even in Sport+ mode. There’s enough information being transmitted back to the driver to know what’s going on and when the car’s about to break away, that’s a major plus.

As for styling, the buzzwords here are smoother, sleeker, and sportier. It’s slighter larger than the 1-Series, but that’s not bad. It’s a little less blunt with a more swept-back front end. Those awkward angles from the 1-Series are gone, and the proportions are good, with the long hood, arched roof, and stubby tail.

Inside the 2-Series is all business with a clear emphasis on the driver. The finish and materials in the 2-Series are a step above those of the last 1-Series. Stuck up  on the dash is either a 6.5-inch wide screen or an 8.8-inch screen with the optional navigation system. It looks a little fragile, and some will find it annoying since it doesn’t recess into the dash when not in use.

Up front you’ll find plenty of head, leg, shoulder, and hip room. The seats are comfy and supportive. More impressive is the rear seat, which is usable, even for taller folks. Though, six-footers are going to want to ride across town, not across the country. The trunk’s what you’d expect: enough space for some but not much gear.

The 2-Series has just earned a Top Safety Pick+ award from the IIHS, and all the standard safety gear is here, air bags, stability control, ABS. No real surprises.

The 2-Series starts from about $33,000 and that’s for the turbo four. You’ll find BMW’s iDrive and Bluetooth as standard equipment along with a 6.5-inch screen. You’ll likely want to add some options like upgraded sound system, HID headlights, and rearview camera. Want the M235i with the turbo six? You’ll need at least $44,000, and you’ll end up spending more, trust us. Loaded you’ll be facing a price of just over $51,000.

So what’s the bottom line with the 2014 BMW 2-Series? It takes the 1-Series into more mature territory, but doesn’t forget a bit of the driving fun. And the M235i is a BMW for the true BMW fan.