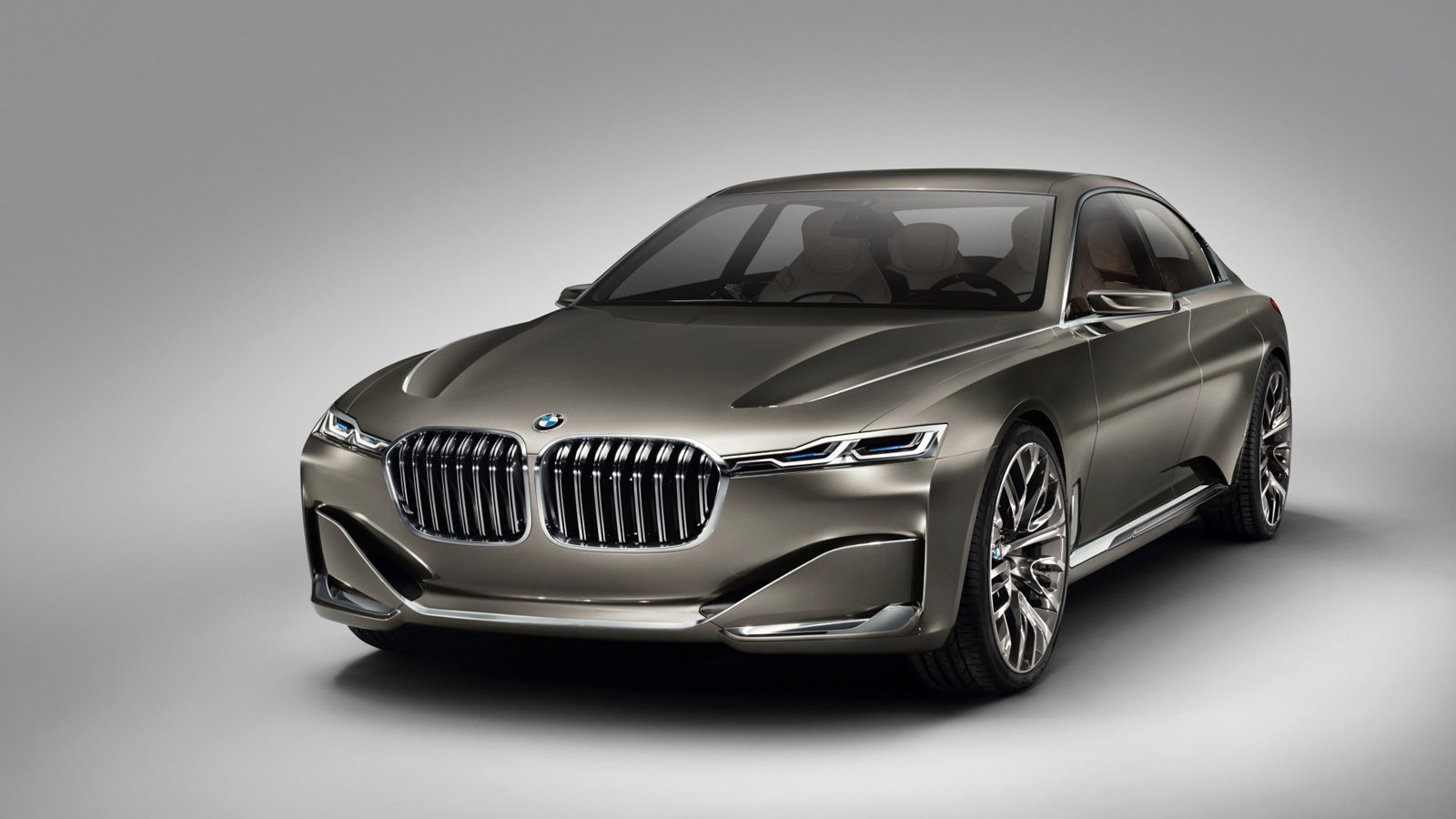 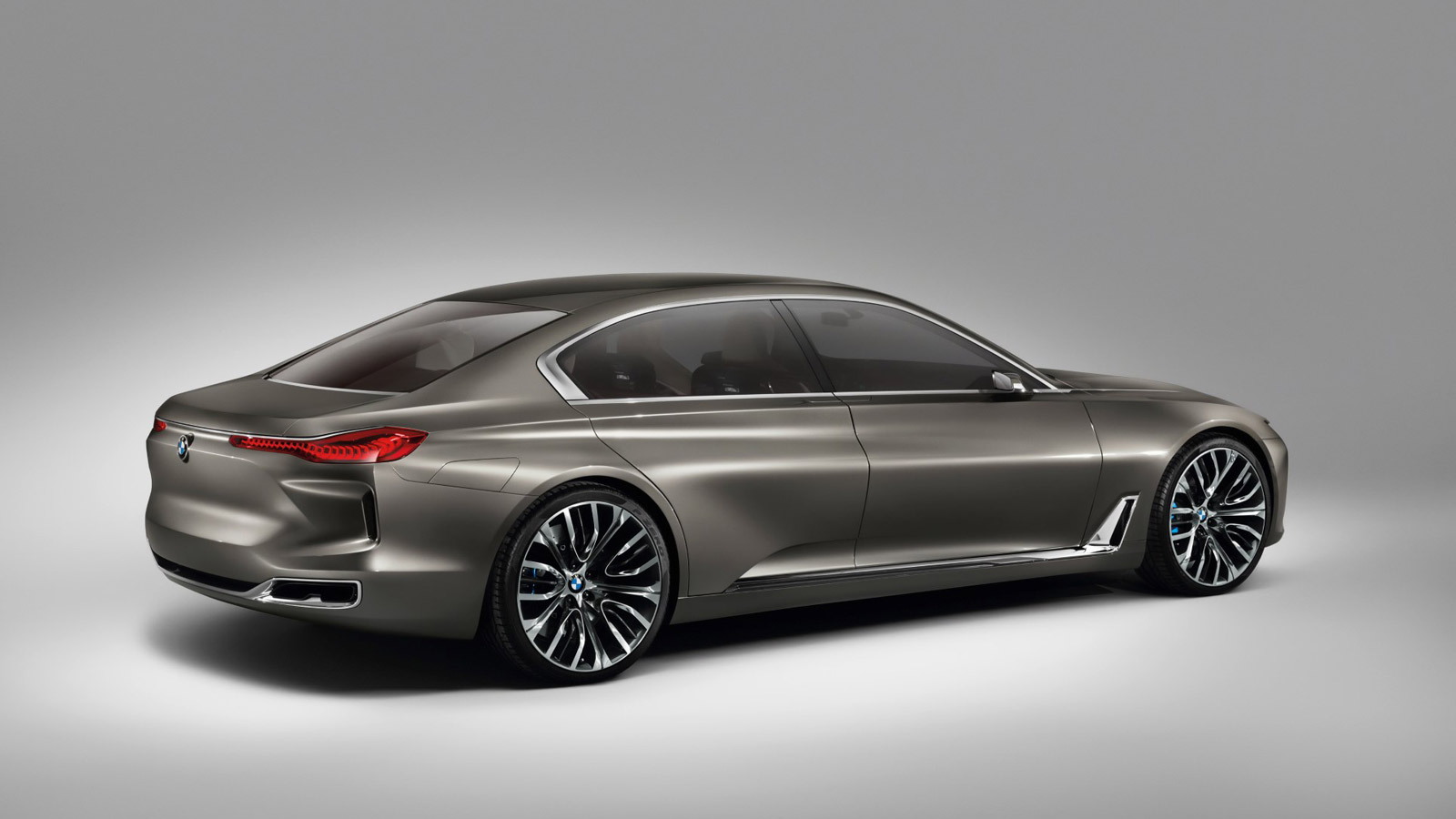 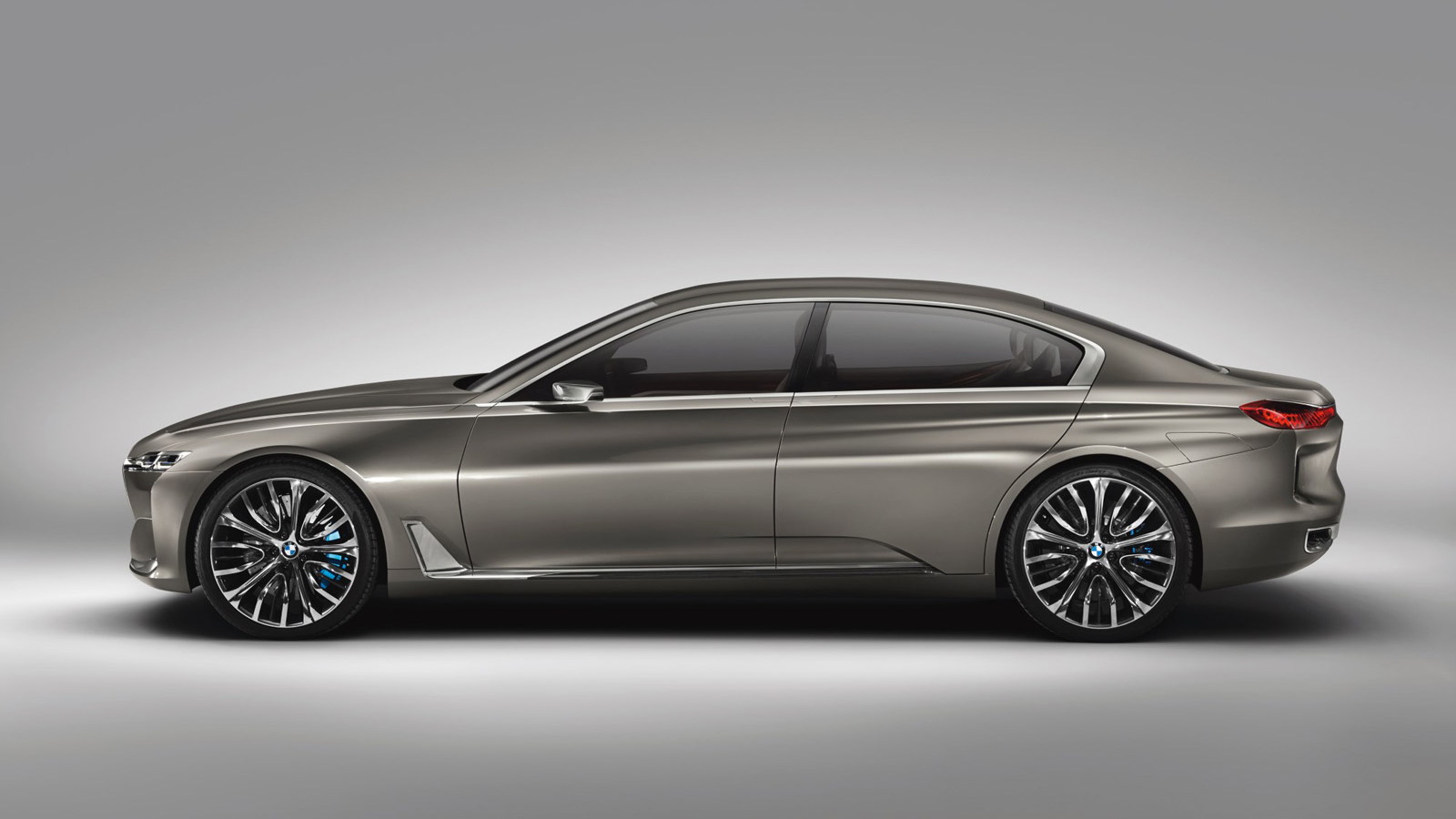 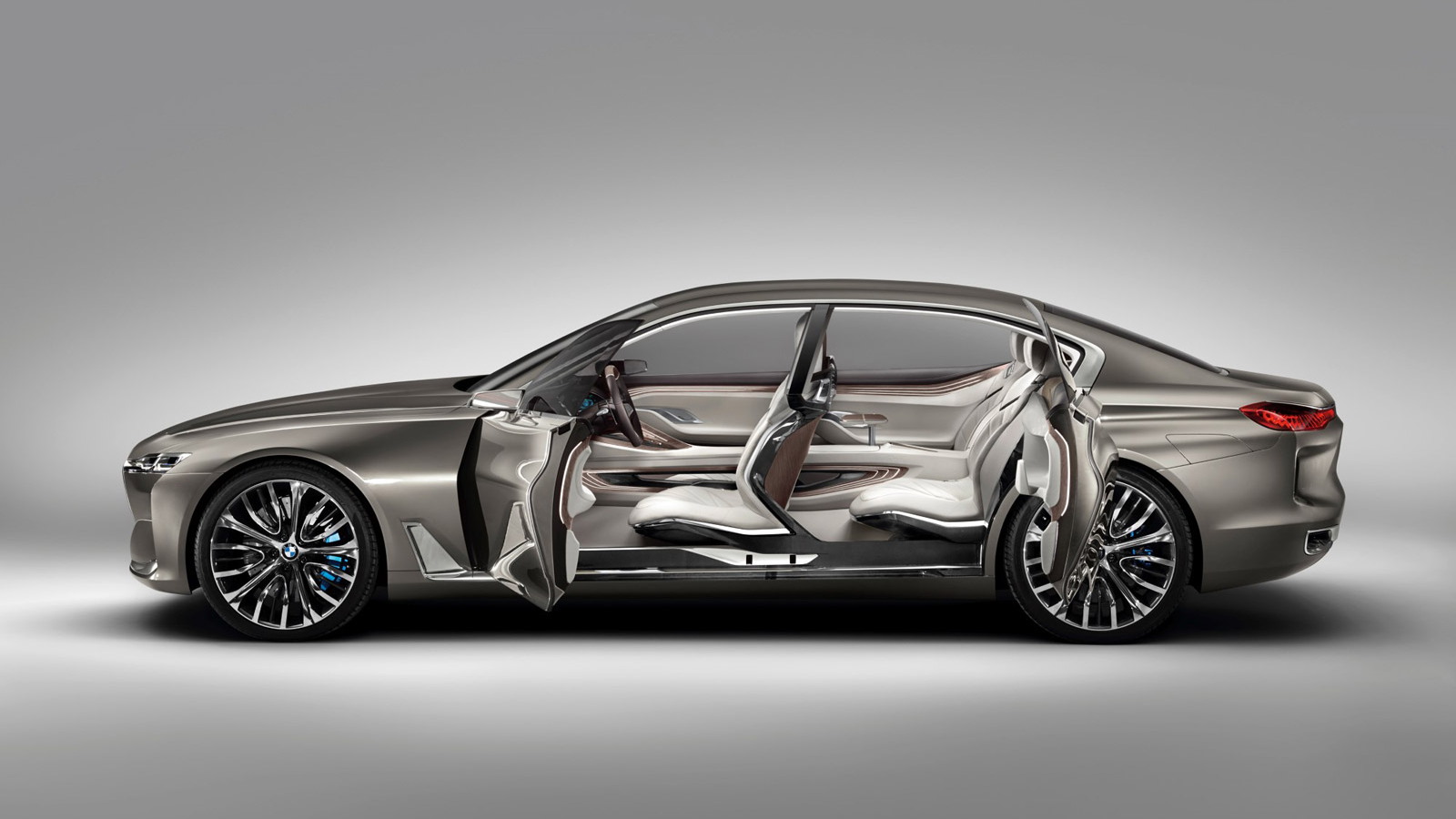 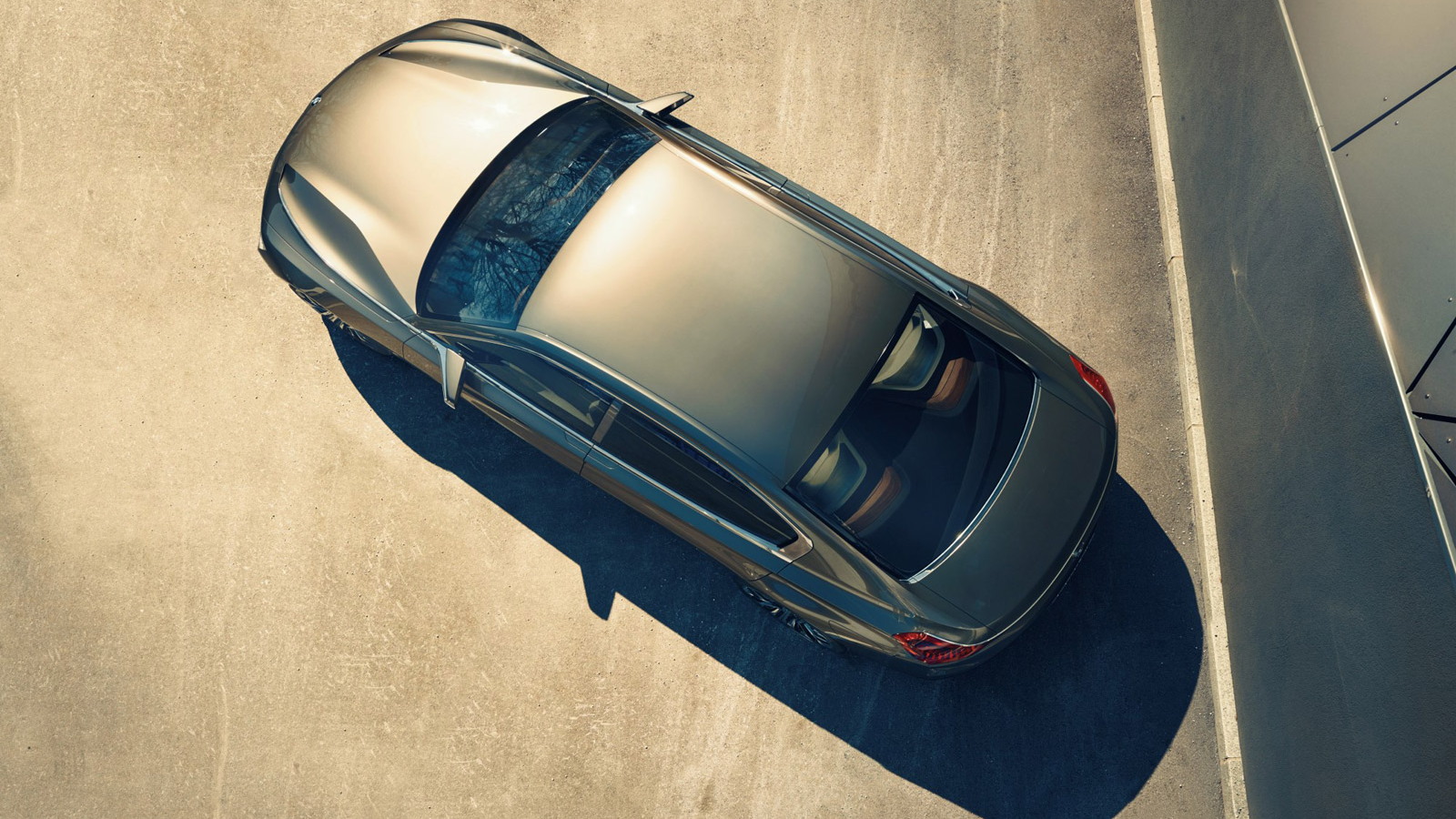 25
photos
BMW’s new concept for the 2014 Beijing Auto Show isn’t the 7-Series-aping mega sedan that we were expecting, but it does pack enough technologies, premium materials and innovations to be worthy of a new BMW flagship. The concept is the BMW Vision Future Luxury, and as its name suggests it hints at what’s to come from the German automaker. For fans of Cliffs Notes, what’s to come is efficient design, lightweight construction, vehicle electrification, and an advanced interface.

Efficient Design
The design of the Vision Future Luxury is an evolution of the look we first saw on last year’s Gran Lusso Coupe, which BMW built to mark the start of a partnership with Italian design house Pininfarina. The front is dominated by the car’s grille, which looks to be bigger than any previous BMW grille we’ve seen. We can also see slit-like laser headlights, below which sit a pair of air curtains.

Moving rearward, a coupe-like profile and sloping trunk lid significantly reduce drag and work in conjunction with tautly sculpted exterior surfaces that help channel air. Other elements include an air breather system at the rear of the front wheel arches, a C-pillar with internal air channeling, and openings in the rear apron which vent air from the rear wheel arches. The final touch is organic LED (OLED) elements for the tail-lights that pave the way for a completely new treatment of the typical BMW L-shaped lights.

OLEDs consist of wafer-thin organic semiconductor layers positioned between two electrodes. The light-emitting polymer layer is roughly 400 times thinner than a human hair and does not require reflectors in order to produce the desired broad light dispersion, thus they can open up completely new ways of using light in and around the vehicle.

Lightweight Construction
BMW says the Vision Future Luxury has been developed using lightweight principles originally developed for its eco-friendly i range of vehicles, although the automaker doesn’t go into great detail yet. We do know that carbon fiber is a key material in the construction of the concept. The lightweight stuff is visible in the doors, under the seats and with the shortened B-pillar. A full B-pillar as used in the past is dispensed with, as the carbon construction allows the seat frames to be integrated into the load-bearing structure. Combined with suicide-style rear doors, the lack of a full B-pillar allows for a wide opening for passengers getting into the rear of the car.

There are further expressions of innovative design, though. For example, the specific geometry and functions of an individual component are created from one and the same layered composite structure, comprising many different levels and materials. In the cabin, for example, an initial base layer of fine carbon fabric is followed by a functional level featuring user interface components, control and display interfaces and lighting functions, which in turn is followed by a further structural, load-bearing layer of aluminum for additional strength. Finally, the top layers comprise the premium materials one expects in a luxury car such as wood and leather. Specific materials found in the Vision Future Luxury concept include aniline leather, lime wood and silk carpet.

This principle is expected to feature in a new modular platform BMW is developing for its future models, sized from the 3-Series up. The first recipient of the new platform is expected to be the next-generation 7-Series, due in time for the 2016 model year.

Vehicle Electrification
BMW hasn’t mentioned what powertrain is found in the Vision Future Luxury, although we know it’s an electrified setup because of the eDrive badge on the trunk. The fact that the concept also features exhaust pipes suggests that a plug-in hybrid system has been utilized. With vehicles like the 2015 i8, BMW has shown that a plug-in hybrid system can be both powerful and efficient.

Advanced Interface
The Vision Future Luxury features a new style of user interface that provides improved integration of BMW ConnectedDrive app-based services. The driver is surrounded by a wraparound cluster of three inter-meshing displays, creating the typical BMW driver-focused cockpit. The left-hand display mainly presents vehicle-related information, while in the center a programmable cluster displays speedometer, rev counter and other information, as well as context-adaptive supplementary data, which is displayed as and when relevant. Meanwhile, the right-hand display--the Driver Information Display--provides additional infotainment information and is controllable via a touch-sensitive interface. The driver also has the option of controlling all these functions by voice command, and further information can be supplied via a head-up display.

Part of the Driver Information Display also includes a section for the front passenger. Applications like booking opera tickets online direct from the vehicle via the BMW ConnectedDrive Luxury Concierge service can be displayed here, where they don’t risk distracting the driver. The relevant functions can be controlled by the passenger using the iDrive control and touch-sensitive interface.

With the Vision Future Luxury, those riding the back also have something to look forward to. They’ll find a pair of displays and a detachable tablet that can also control vehicle functions and access ConnectedDrive services. Everything from trip-related information like speed and journey time to information relating to concierge services can be displayed here. It is also possible to use online entertainment content like internet-based video and music streaming as well as gaming.

With its arrival at the 2014 Beijing Auto Show this weekend, the BMW Vision Future Luxury furnishes a long-term outlook on the perception of modern luxury for the BMW brand. Let us know what you think of the concept in the comments section below, and to see what else on show in Beijing simply head to our dedicated hub.