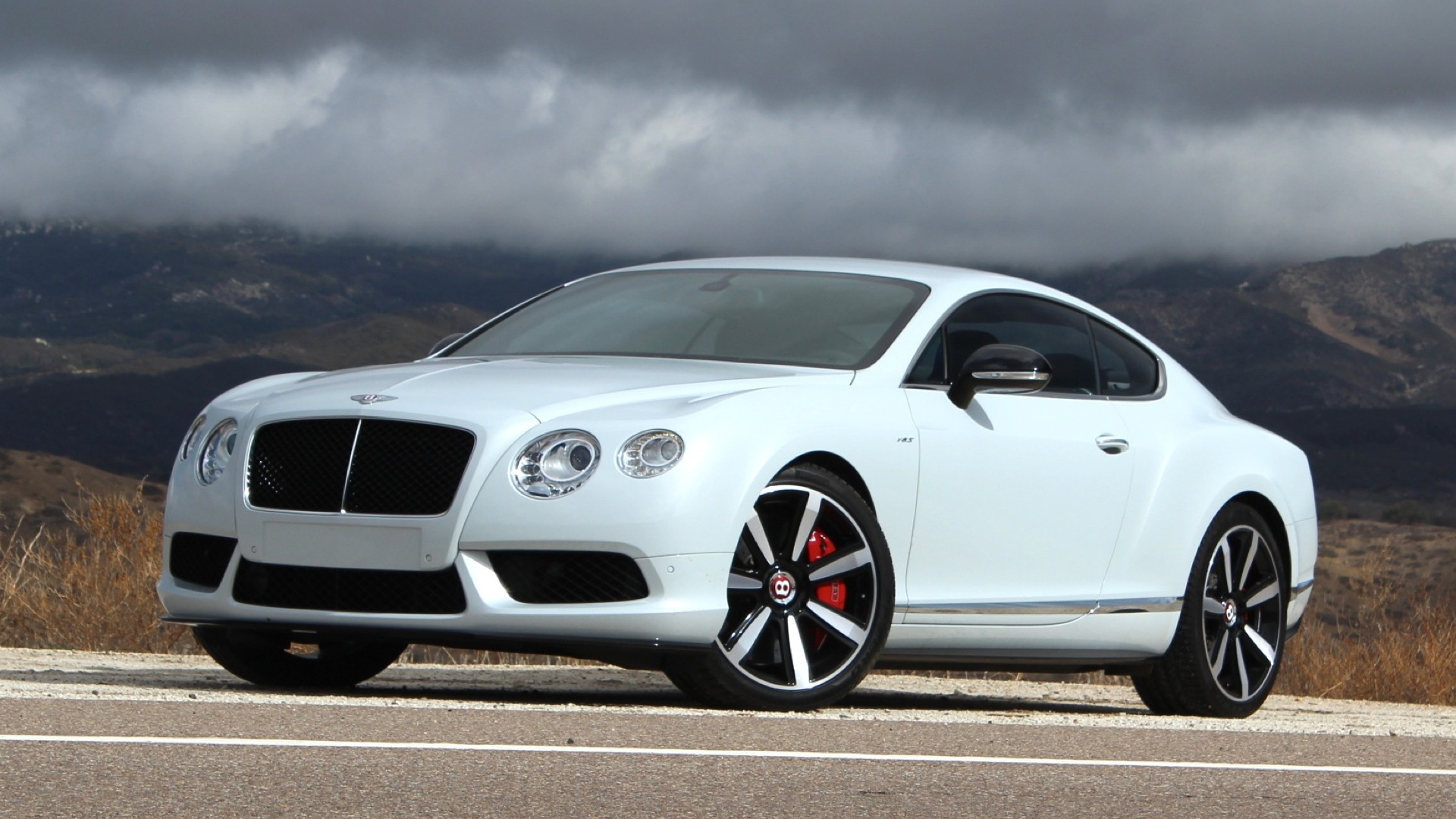 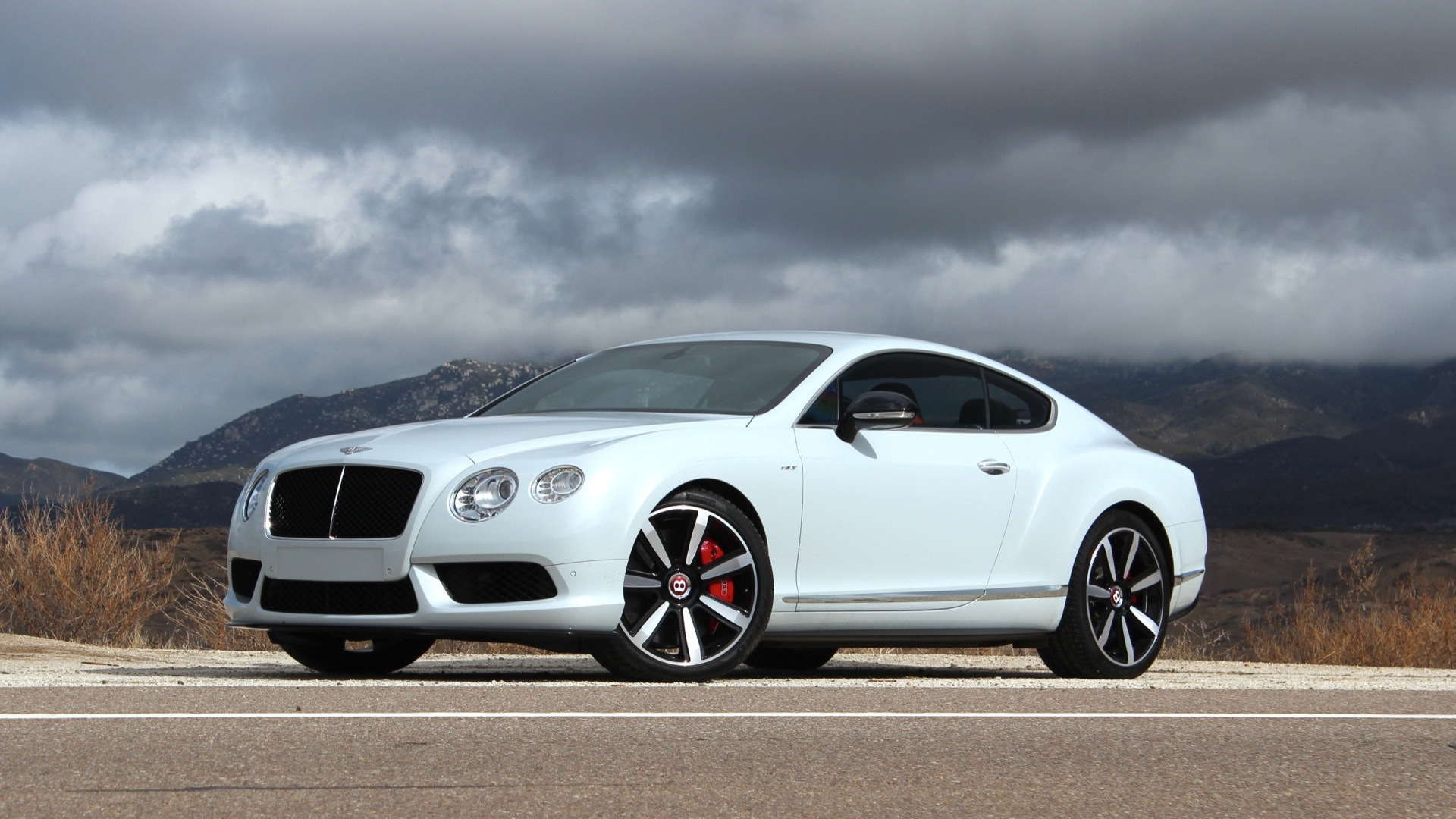 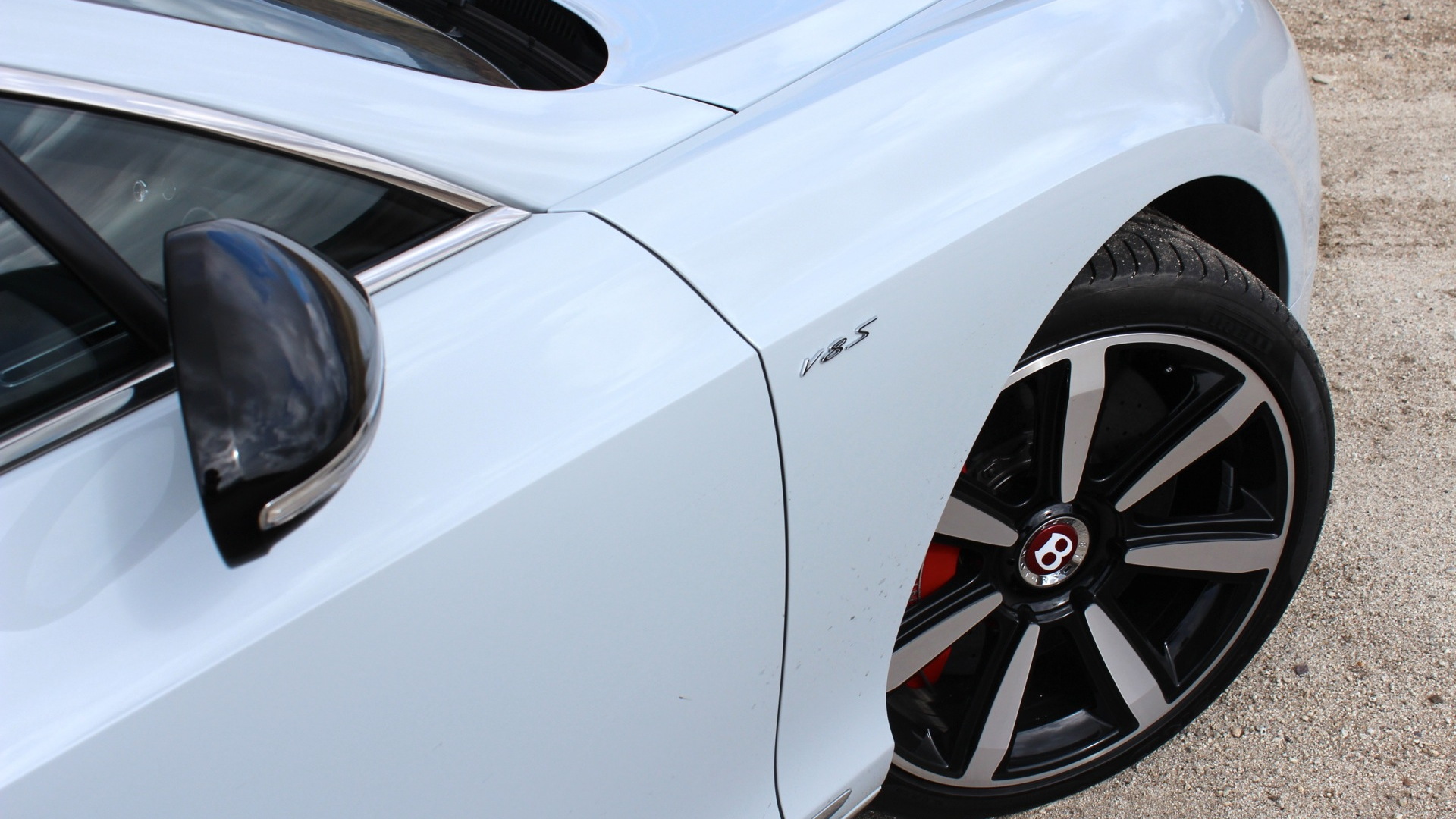 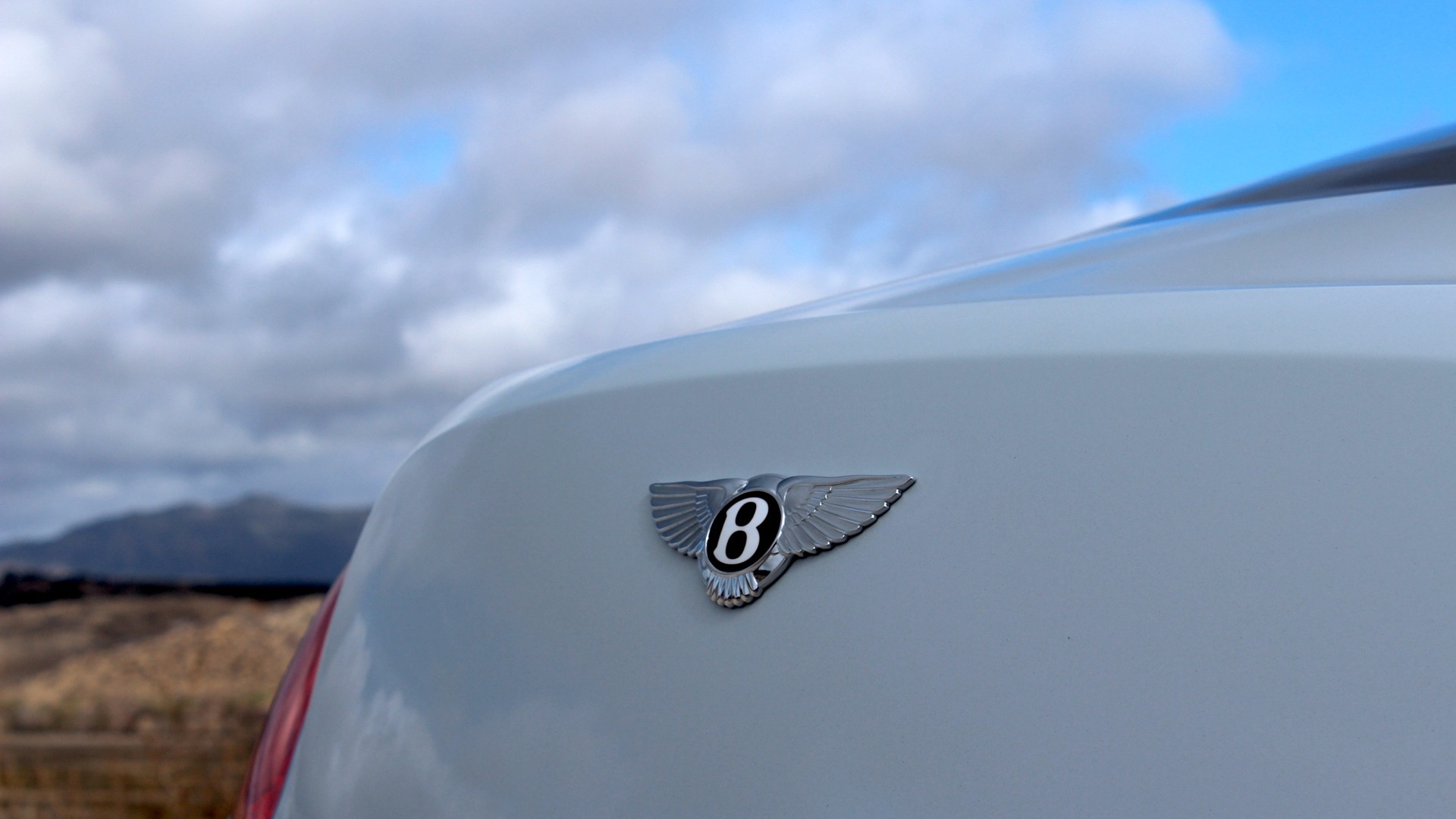 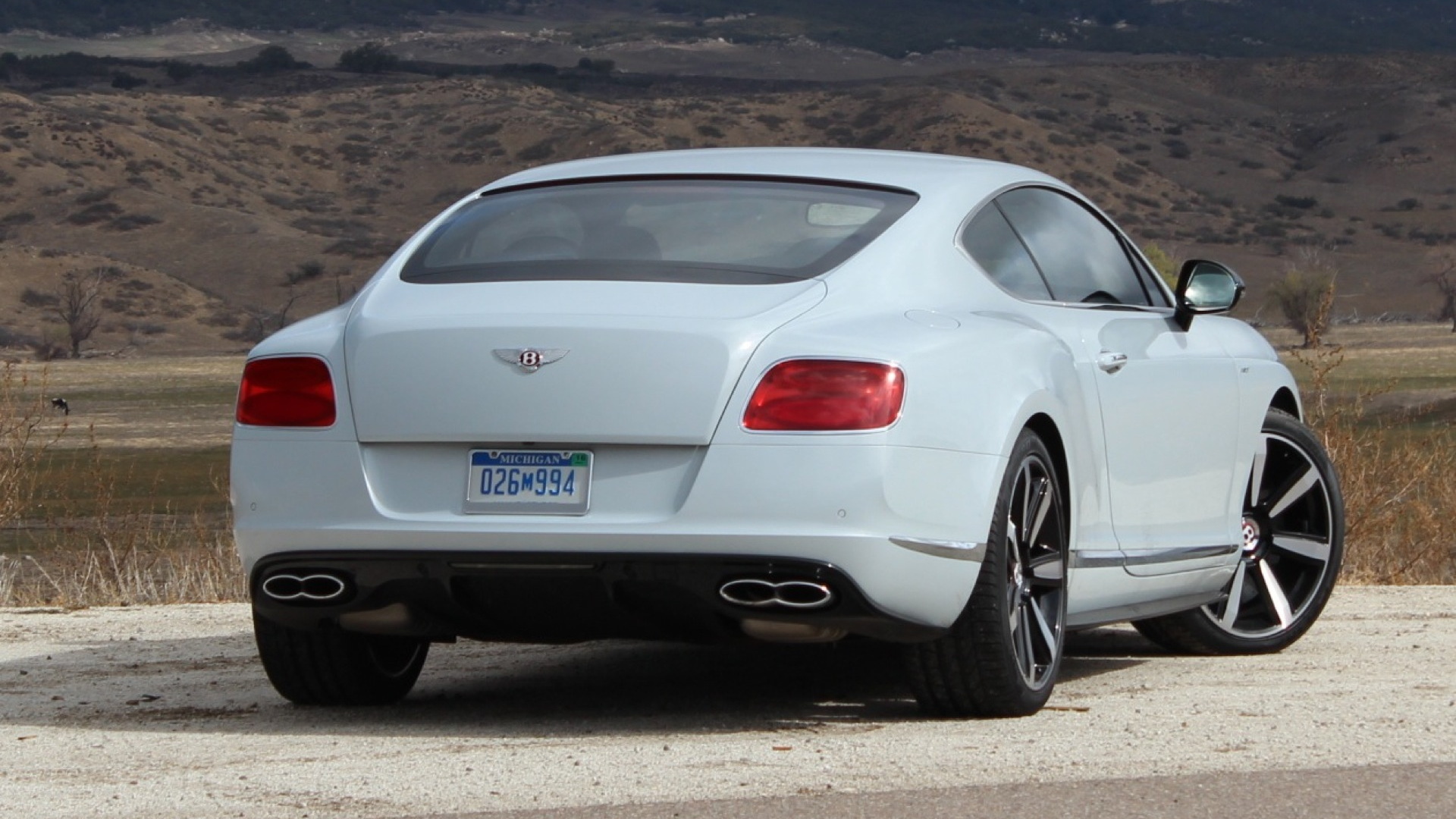 66
photos
How quick is the new Bentley Continental GT V8 S? How powerful?

If this were the Bentley of the past, when it was intertwined with Rolls-Royce, the deflective reply to such questions would be “Sufficient.” And it would be left up to us to agree.

A quarter-century ago, when the imperially iconic Bentley Turbo S was released, company communications reportedly described its output as “Sufficient plus 30 percent.”

If that beast, with its 60-mph times of around six seconds and wallop of nearly 500 pound-feet of estimated torque, was that, based on our recent drive of the new 2014 Bentley Continental GT V8 S, we'll call this new, more performance-oriented addition to the lineup sufficient times two.

That coy English delivery has yielded a bit to German forthrightness in recent times, under the auspices of the Volkswagen Group. Today Bentley faithfully follows its traditions in craftsmanship at its Crewe headquarters and assembly facilities, but now it does talk numbers—plenty of them.

First off, power. The 'S' is essentially 'chipped up' and better-breathing, just a little bit versus the normal V8—producing some meaningful change that effectively preserves the wonderfully long and flat torque curve, and raises it a bit through turbo management. This engine makes 521 horsepower, as well as 502 pound-feet of torque (from 1,700 rpm all the way up to 5,000 rpm); for those who want to chart it out, that's 21 hp and 15 lb-ft more than the non-'S' car.

Efficiency numbers, it seemed, were also dropped into the message whenever possible at a presentation of the vehicle to the automotive and lifestyle press earlier this month in Southern California. The GT V8 S returns a commendable 246 g/km in the Euro Combined cycle—or 15 mpg city, 24 highway for us Americans. And who among the Bentley crowd cared about this sort of thing in the past (hint: these are different times, and did you know Bentley's also working on a plug-in hybrid)?

It's been less than two years since Bentley brought back the V-8, and while it's been a game-changer for the brand in the best of ways, with the 'S' it brings performance of the V-8 model that nudges up on the top GT Speed model in every respect. While the flagship engine of the Continental lineup remains the wunderbar twin-turbocharged W12—a torque-churning engineering marvel, and an unlikely surrogate offspring of two VW VR6s—the 4.0-liter V-8 was developed jointly between Bentley and Audi and incorporates all sorts of modern engineering items aimed at increasing efficiency and improving responsiveness.

It really doesn't matter what gear the eight-speed automatic transmission happens to be in at the moment. The majority of the time, the twin-turbo V-8 responds with all the seemingly effortless character and limitless low- and mid-rev torque of its legendary predecessor. Ease into it with your right foot at speed and the V8 S 'wafts' up to easy, stable speed in a way that could trick you up to triple-digit mph if you're not minding the speedometer. Lock the satisfying aluminum shift knob over to the manual gate and you can lock in individual gears and get a grasp of how gobsmackingly strong and on top of its game this engine feels at even 2500 rpm. And with the lack of fluster of the wide rubber and all-wheel drive system, you'll feel like you're becoming one with the seatbacks as you accelerate out of nearly any corner.

There's one exception. Stomp down on the accelerator from a standing start, and the first 10 mph aren't this powertrain's proudest moment. While the rear-biased all-wheel-drive system unfailingly puts the power forward securely on all four tires where it needs to be, the engine feels almost as if it's taking a deep breath before giving the situation its all—and it's the only time, really, that it betrays itself as not being that big-displacement Bentley V-8 of yore.

As with other models in the GT lineup—save for the Supersports, which truly puts on its track suit and sheds some pounds—this is a very hefty car. At its lightest, the coupe totals 5,060 pounds. Opt for the GTC V8 S convertible, and you end up around 5,400 pounds—or within a few hundred pounds of a Cadillac Escalade.

We felt every bit of the weight going into some very tight corners. But it loads up and leans a bit earlier than you might expect if you’ve hopped into it from a lighter car; and after just a few tight corners it felt entirely predictable. The weight shows in very tight corners and hairpins, where there's really no disguising it—as I suppose is the case from a standing start—however body control and responsiveness everywhere else is phenomenally good. The suspension unloads in a slow, controlled way—which might not make it a champ on the slalom but it's great for the occasional surprise decreasing radius turn.

Bentley set us out on a route that included more than 350 miles of Southern California highway, with some some isolated desert stretches. And out there where the road opened up and those tight canyon corners yielded to long straights and higher-speed sweepers, the Conti GT felt at ease, and we had a much easier time of loading it up going into medium-speed corners and charging out on the throttle.

Charm on the high-speed sweepers, and from the tailpipes

The V-8 has oodles of aural charm, too, whether you go for the Sports Exhaust option ($2,480) or not. In either case, it perks up from a low rumble at idle, pulsates and barks in the middle revs, and sings—especially with that option—more wildly to the top of its rev band. Nail through the gears and you hear a little puff of the wastegate with each change—and a snort sounding a bit like a double-size tuner-car engine on occasion, as we lifted quickly alongside a canyon wall.

Curiously, even this ’S’ version of the Conti GT V8 has cylinder deactivation, and it's one of the keys to creating a 500-plus-hp car with a 24-mpg highway figure. Just as with the systems used in big Chrysler (Dodge/Ram) and GM (GMC/Chevy) V-8 engines, this eight can run in V-4 mode during very light-load conditions. We couldn’t feel it so much as hear it, with an odd change in sonic character (as we crept along in tight traffic at around 35 mph, for instance).

There are four different settings for the air suspension system, conjured up by a console button and then selected through the touch screen. We compared and contrasted them on a range of surfaces and found the variance to be pretty narrow. You get more motion in the cabin on jittery road surfaces in the sportiest mode—something you might not appreciate at low speeds, but you'll want that on high-speed blasts, as if you forget and leave it in the most comfort-oriented mode the road surface can feel blissfully removed.

Versus the GT V8, the suspension has been lowered 10 mm, and it gets stiffer bushings and a different calibration for the air suspension. It altogether gives this car a firmer character, even though none of the main suspension pieces have been changed for the S. The Continuous Damping Control is indeed calibrated a bit differently, and the stability system gets programming that allows you to push closer to the limits before intervention.

Confidence-inspiring, yet missing some communication to the driver's seat

The electro-hydraulic steering in these models is very nicely weighted, even at the limits, on a rough surface, don’t expect to feel any sort of feedback through the steering wheel; it feels like you’re connected not quite directly but through a series of rubber mounts, soaking up every bit of information—to the liking of Bentley customers, we assume.

From the thick steering wheel, reaching for the steering-column-mounted paddle-shifters (which are pretty satisfying to use) can feel awkward on tight, lower-speed canyon roads, due to the long ratio of the steering (for a performance car) and their close proximity to the turn-signal stalk on the left.

While we spent most of our time in a GT V8 S Coupe, we drove a GTC V8 S convertible for nearly 150 miles (albeit on a less exciting route), and found the driving experience to be nearly identical, albeit with a little more 'coarseness' in the front end—and the exhaust note. As a side note, to passengers, the Sports Exhaust might seem a little outlandish with the top down.

Especially in the GTC, we made use of the very effective heated and ventilated seats and neck heater—all of use on a cool, sunny day with the top down. The convertible also had the optional wind deflector; and while we can't say that it's one of the lowest-turbulence convertibles we've been in, it's pleasant enough on you where you might just keep the top down for a few hours up to your favorite wine country on the weekend.

Playing matchmaker: Who's the 'S' for?

The GT V8 S, which will be delivered in the U.S. by early summer, feels built for those who’ve owned several AMG SL-Class or CL-Class models, or been there and done that with the likes of the Jaguar XK—or perhaps XJ or BMW 7-Series—and truly want something that’s warmer, better detailed, and feels one-of-a-kind.

These cars have a knack at wowing even guys who are a bit jaded about vehicle interiors nowadays. The quilted, hand-stitched leather you get as part of the Mulliner (Driving Specification) build is beautiful and comfortable, and there wasn't a single piece of trim that wasn't perfectly fitted. Everything is solid and tight, and you're not bound to see cheap pieces in lesser-seen places (as is often the case in more mainstream luxury cars).

Maybe twelve cylinders matters more to some; but we'd pick this flavor of V-8 Continental over any of the whirring W12 versions any day. It's no nimble canyon-carver, but 'S' should impress you and yours—and one-up that rival CEO in the neighborhood—with that combination of presence and supercar-league performance numbers.