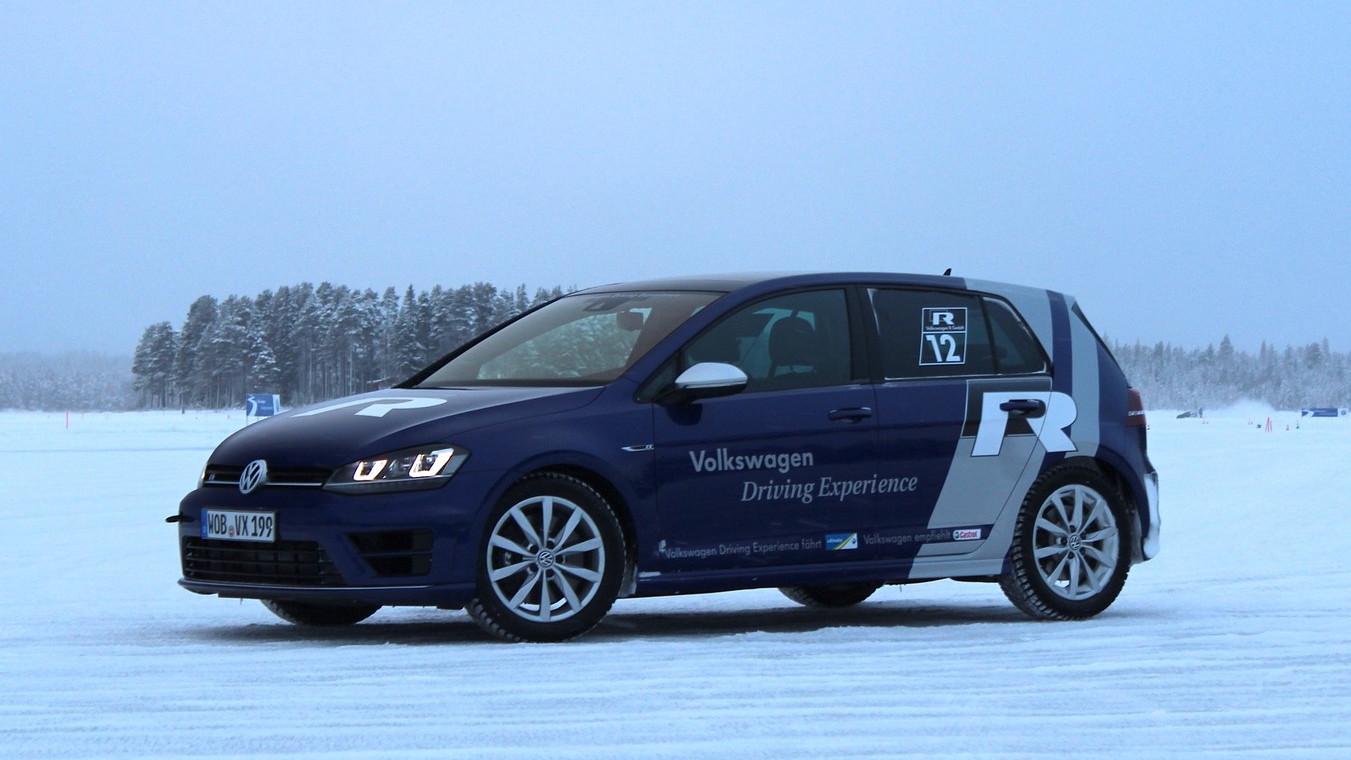 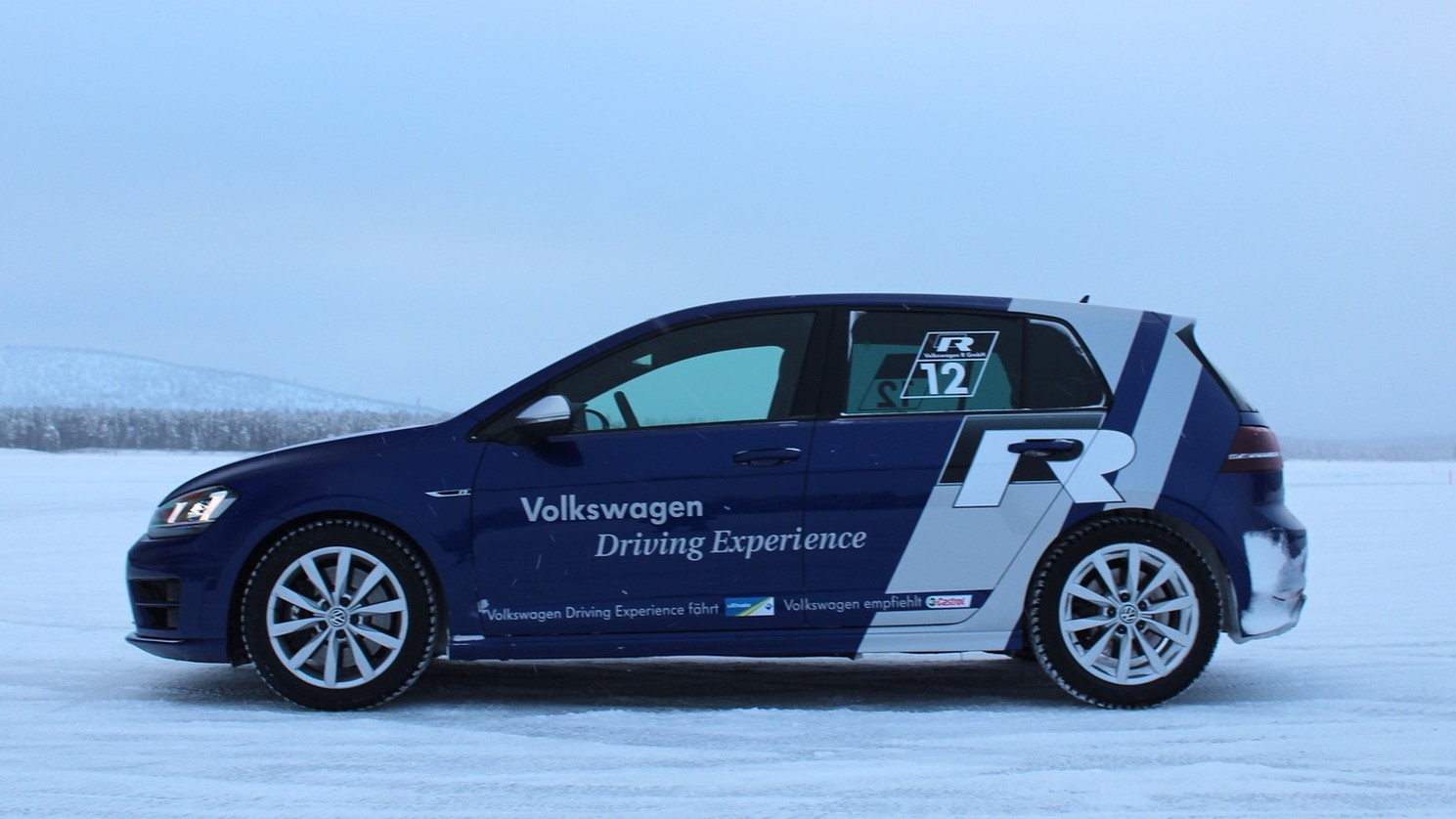 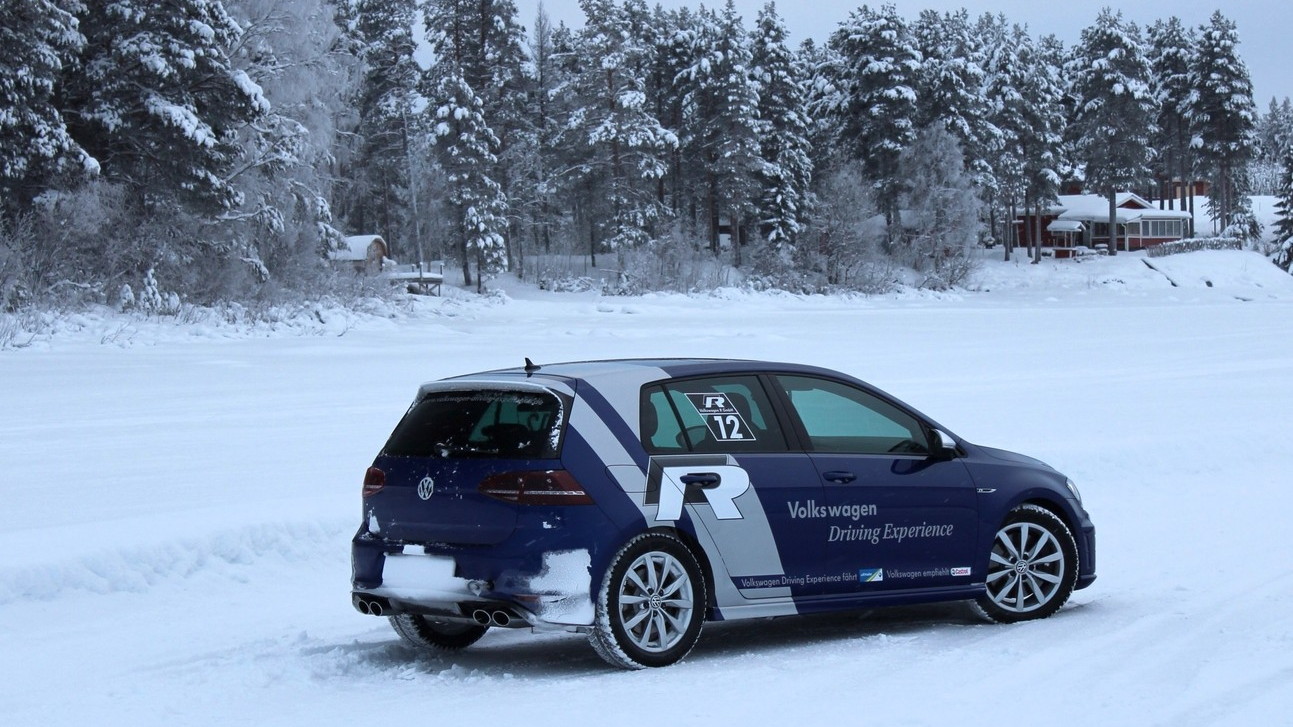 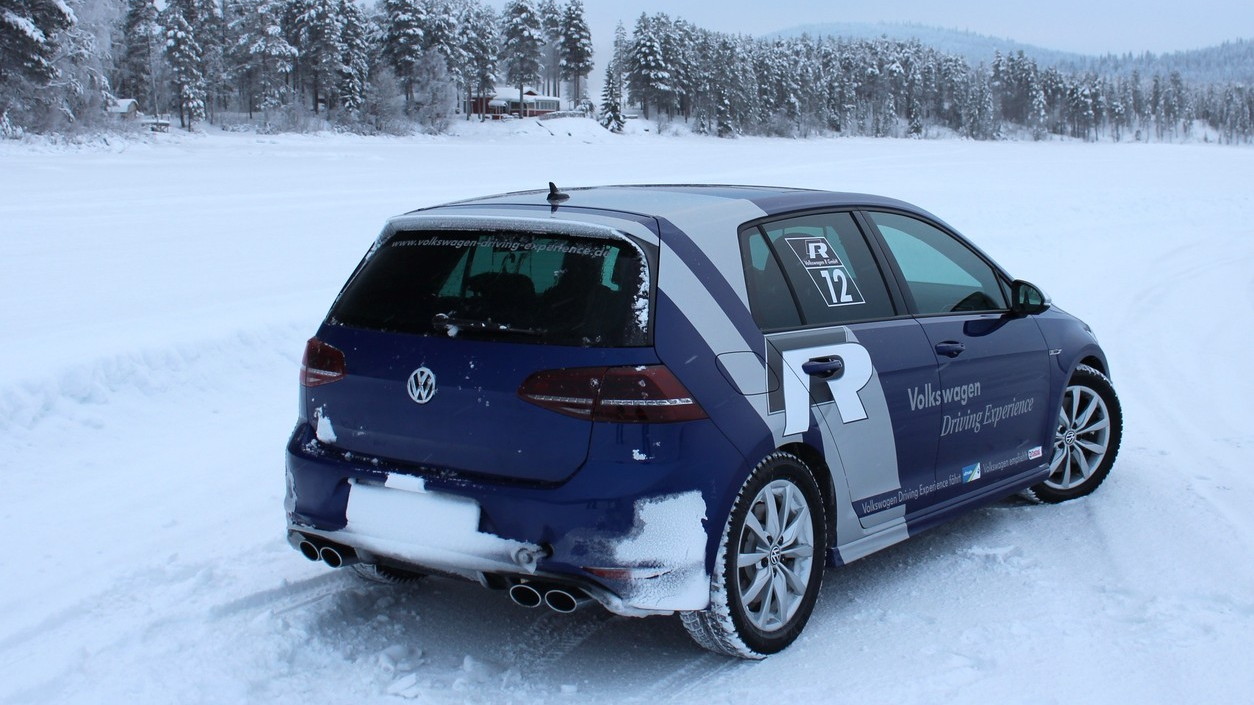 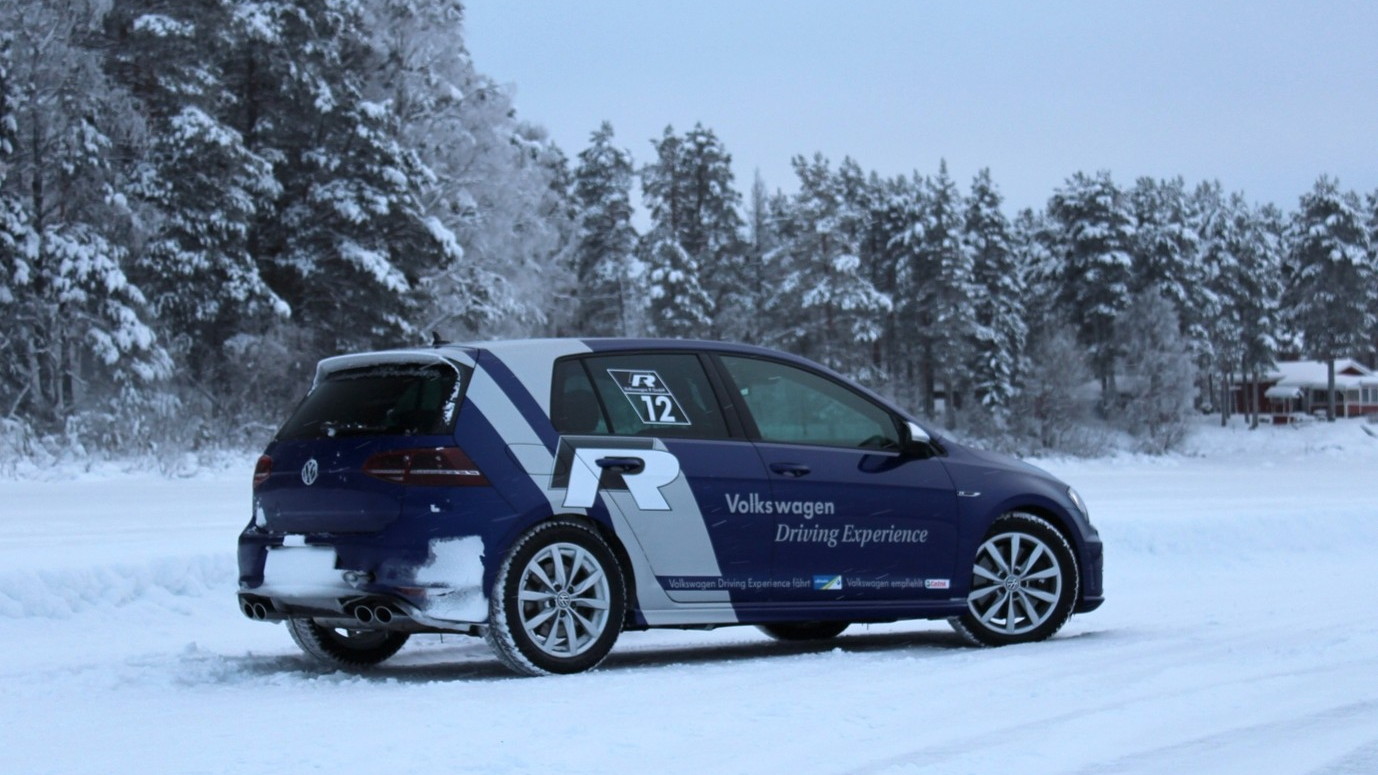 83
photos
We've just had our first drive of the 2015 Volkswagen Golf R—even though it's about a year ahead of the time it arrives to the U.S.

Oh, and there's one other little asterisk attached to any claim of this being a full review: We really only drove it on ice—up near the Arctic Circle, in the Lappland region of Northern Sweden, on a frozen lake around Arvidsjaur, an area that German automakers favor for cold-weather testing.

And that it was. The temperature was a cold -20 degrees Fahrenheit the night we arrived, and a blustery 3 degrees when we headed out on the lake the next morning.

Why on the ice? Partly, it served to show off just how well the Golf R’s 4Motion all-wheel drive system can fit the traction needs of the moment; and partly, it emphasized the differences between stability modes and driving, including a snarling new Race Mode.

Drifting on studs, on inches of ice

And it was just a (frozen) blast to get the Golf R out on the ice—with studded Lappi Winter Tyres that are legal only in a few mountainous regions of the U.S., seasonally. With this setup, VW was able to show off that Golf R now has a stability control system can be completely turned off (not reactivated the moment you tap the brakes, like the last generation), and that it also has a Sport Mode that allows lots of freedom to drift and rotate before the system calculates a little nudge in the right direction.

Ice driving demands both finesse and, at times, some aggressive maneuvers affecting steering and loading. Thankfully the Golf R's 4Motion all-wheel drive system is ready to play both sides; as we experienced on the ice, it's ready to respond quickly and send up to 100 percent of power to the rear wheels if needed, or vary the power almost infinitely and discreetly from the front to rear, depending on the conditions and what you dial up with your right foot.

That's allowed through Haldex 5 hardware that includes a multi-plate viscous clutch, actuated by oil pressure. An electrohydraulic pump primes the system at 30 bar (435 psi), so that it essentially decouples the rear wheels when cruising, yet the valve controlling distribution can respond almost instantaneously, sending more power to the rear. Due to new controls that now incorporate more parameters such as wheel speed, steering angle, and of course throttle input, as well as sensors for the stability control, the all-wheel drive system can respond more proactively than ever before. Meanwhile, sophisticated electronic systems (under several sets of acronyms that you really don't need to know) pulse the brakes to moderate power left to right.

Fire and ice, finesse and flick

What we were particularly impressed with is how the all-wheel drive system appears to reward finesse, while also delivering the sort of abrupt changes in power distribution and loading that someone might want and need on ice or other slippery conditions. By the end of our day out on the frozen lake we were quite confidently throwing the Golf R sideways and relying on our sense of balance, and the steering and throttle, not the stability system (when the worst that can happen is to stuff it into a snowbank, which we didn't, you can get a little more adventurous).

The only thing we missed at times was a real handbrake lever to help out just a little bit with the rotation, although with experience, we were able to control that rotation by 'powering through' a drift, while being a lot more deliberate with steering inputs than we would be on pavement.

A drive on ice doesn't reveal all that much about driving nuance when the coefficient of friction goes up to normal pavement levels, but it does demonstrate some of the benefits of the 'progressive' steering system, which has just 2.1 turns lock-to-lock, as opposed to 2.75 for the standard Golf's rack. That allowed us to quickly apply opposite lock during that time spent drifting sideways.

We also weren't able to make much use of the R's boost in power, with its 2.0-liter EA888 four-cylinder engine making 290 horsepower and 280 pound-feet of torque. This version of the engine gets a different cylinder head, exhaust valves and valve seats, valve springs, and pistons; the fuel-injection system and turbocharger are also different compared to what you get in the GTI. And with other versions of this engine, it has variable valve timing for intake and exhaust valves, as well as two-stage valve lift on the exhaust side—plus water-cooled exhaust gas channels.

Fastest-ever Golf; more than 30 mpg too

And if you do have the available traction, you'll find that it's the fastest-ever Golf, with a preliminary 0-60 mph time of just 4.9 seconds (more than a second faster than the 2015 GTI). VW is projecting an EPA highway rating of 31 mpg, which is 4 mpg better than the previous Golf R.

Ride height is nearly an inch lower than the Golf, but only slightly (0.2 inches) lower than the GTI. And most of the changes to the latest Gen 7 Golf apply here: Compared to the previous-generation Golf R, this one is 2.6 inches longer and about the same width, with a wheelbase that's about two inches longer. Just as with the current Golf, we find the profile to appear less svelte than the previous generation, with a higher cowl. Despite a stronger structure, it's somewhat lighter than the previous car, though, due to the use of more high-strength steel.

As for the exhaust, it's more than a visual difference. While gases escape only through the inner two of the four exits under light-load driving, high-throttle or high-rev conditions open butterfly valves at the exit of a rear resonator chamber open, to open the outer exits and give the exhaust a note that's raspier when revved. Engaging Race mode opens those butterfly valves for the outside two outlets all the time, resulting in a noticeably more bellowy sound just off idle and up to the mid revs, where it seems that the piped-in intake sounds chime in just as much if not more.

In addition to Race mode, we'll get Normal and Individual drive modes, and each of these modes allow different throttle and steering settings, as well as different shift points if you opt for the quick, automatic-like dual-clutch (DSG) transmission. The European cars we drove had an Eco mode, too, but U.S. cars won't have that.

No two-doors for the U.S., but a choice between transmissions

The U.S. market will only see the four-door version of the Golf R. While standard equipment in the U.S. version isn't yet finalized, it should include leather (sport-contoured) seats, heated front seats, ambient lighting, bi-xenon headlamps with adaptive front lighting and LED daytime running, 18-inch wheels, the MDI system with Bluetooth connectivity, and the Drive Mode Selector. Navigation, keyless entry and push-button start, Park Distance Control, and Fender premium audio will be among the options.

Our versions of the Golf R will get sport seats, with two different leather upholsteries; this is a car in which it’s very easy to find a perfect driving position, and find the sort of 'seat of the pants' sense of adhesion that you need for this kind of driving. While the WRX STI only offers a manual gearbox, the Golf R offers a choice between a manual or VW's DSG. With the available DSG gearbox the Golf R will be nearly 300 pounds heavier, VW concedes—although it's the version that sets the sub-five-second 0-60 time, with the manual officially 0.2 sec. behind. Out on the ice courses, we only had access to manual versions.

Development of the Golf R, as well as some special engineering for it, was done by R GmbH, a wholly owned subsidiary of VW (with around 350 employees of its own) that develops performance-oriented variants and functions much like Quattro GmbH for Audi. That close supervision over the 'R' product, plus supply of the Haldex system, are reasons that the Golf R will be built only in Wolfsburg, while the GTI models delivered this year for the U.S. will be built in Mexico.

Priced to be a hatchback rival to the WRX STI sedan

While we can't say that we got a feel for how much the Golf R amps up the experience versus the GTI, we can anticipate that it will be a great hatchback-only counterpoint (and possibly a stronger performer) than the sedan-only 2015 WRX STI.

We're eager to test those capabilities on real pavement, so look for full driving impressions later in the year. In the meantime, we can gush about how much fun this hot hatch is on ice, and point to how the 'R' really must stand for rally.