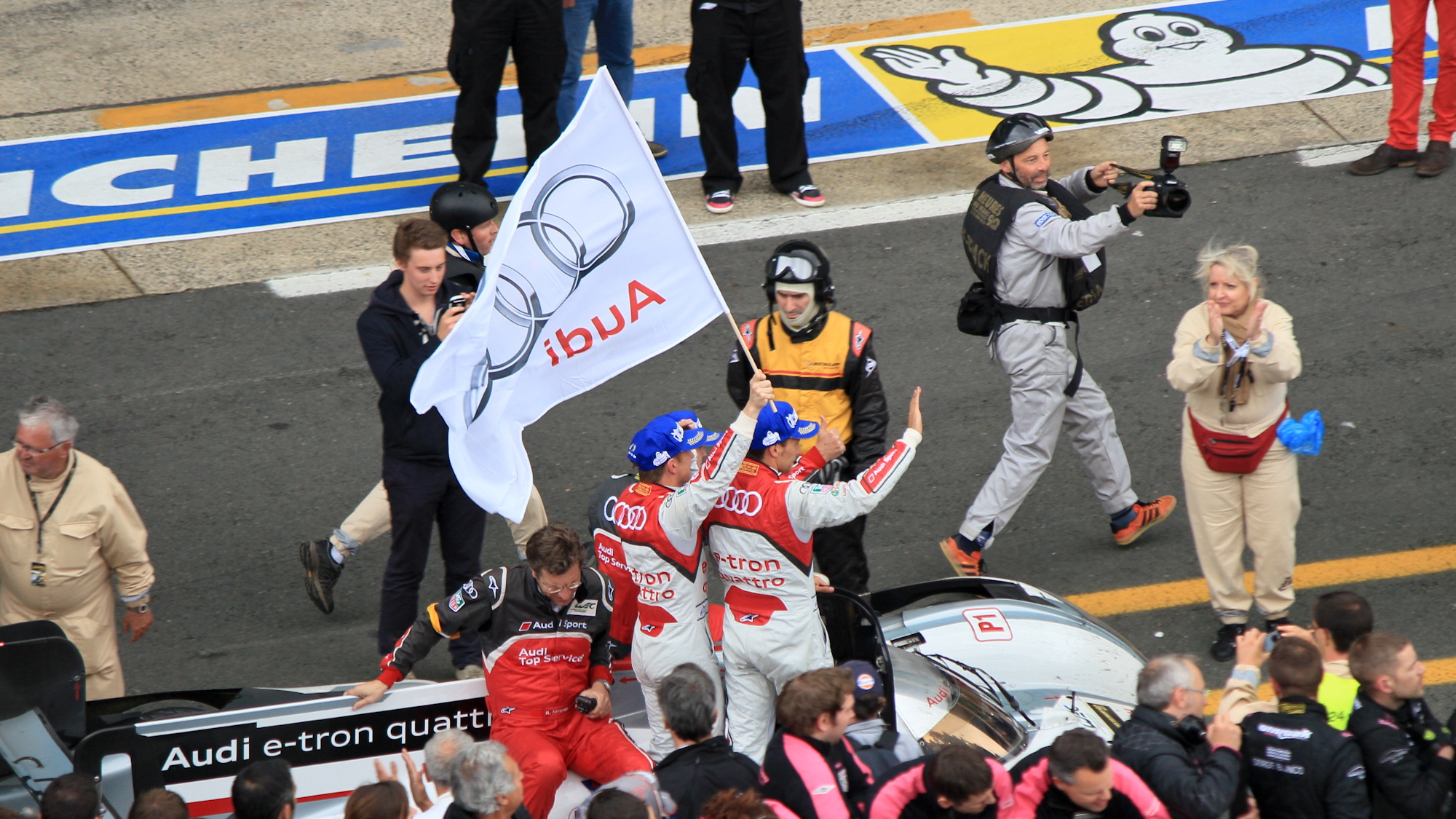 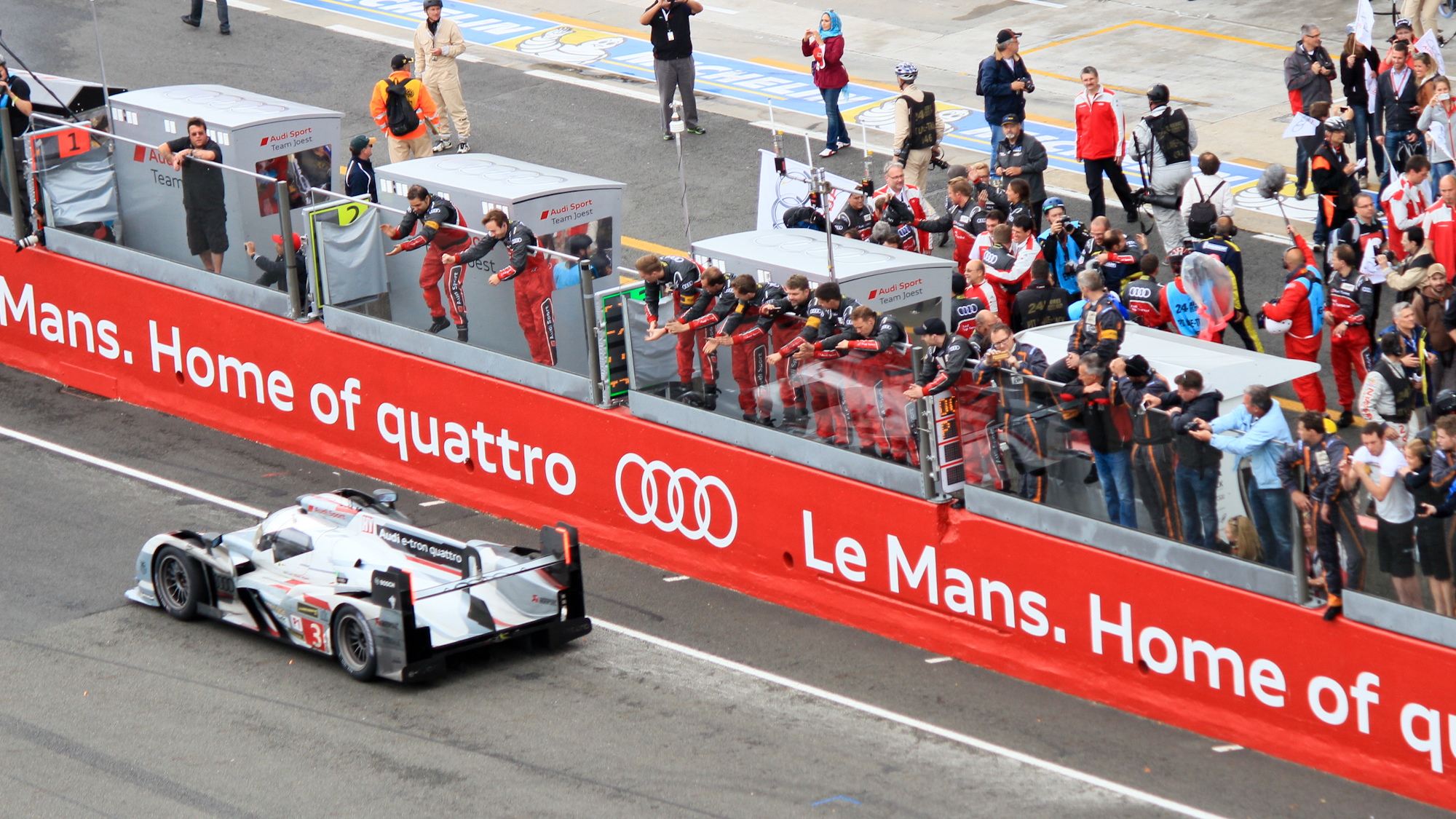 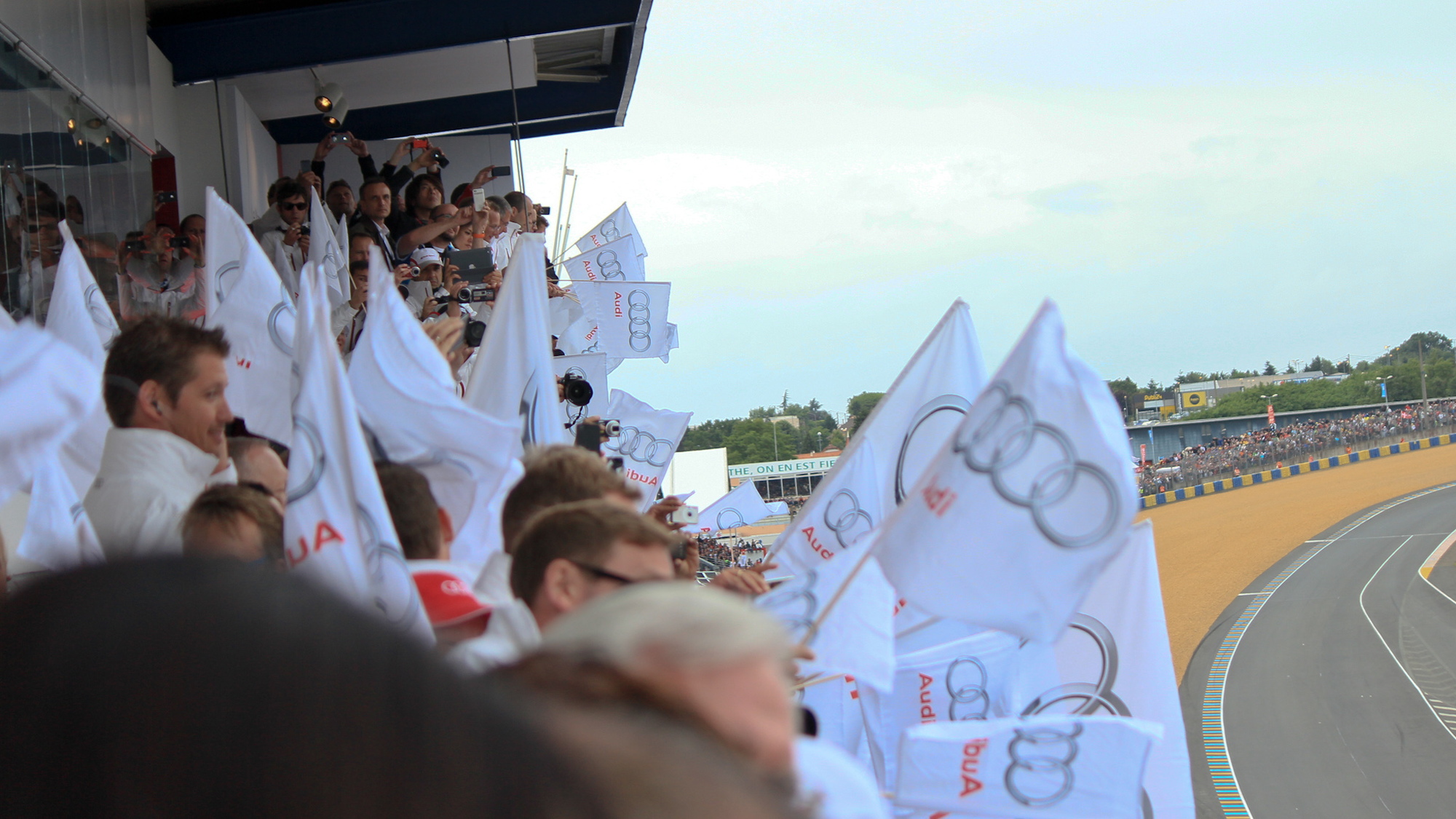 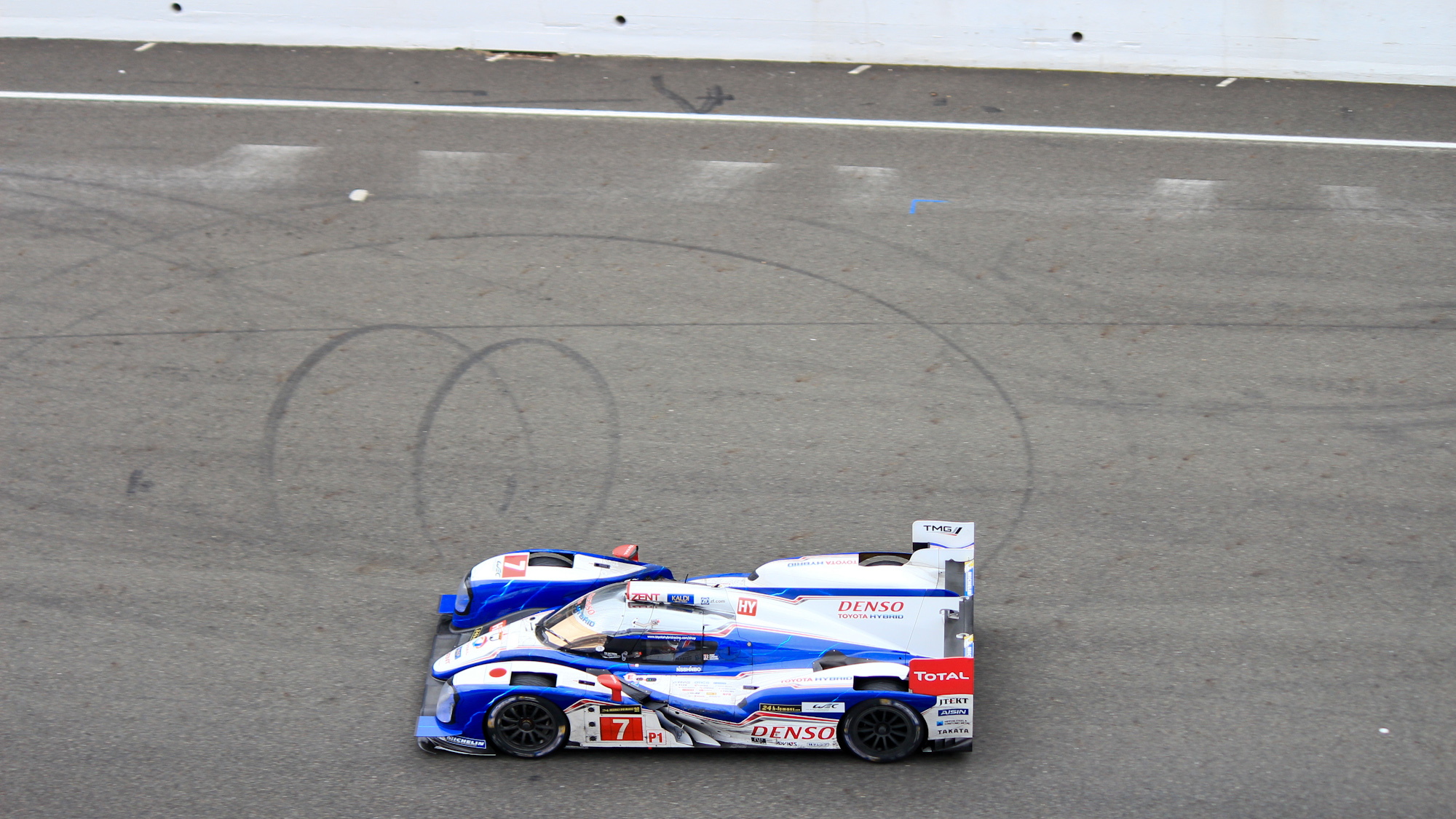 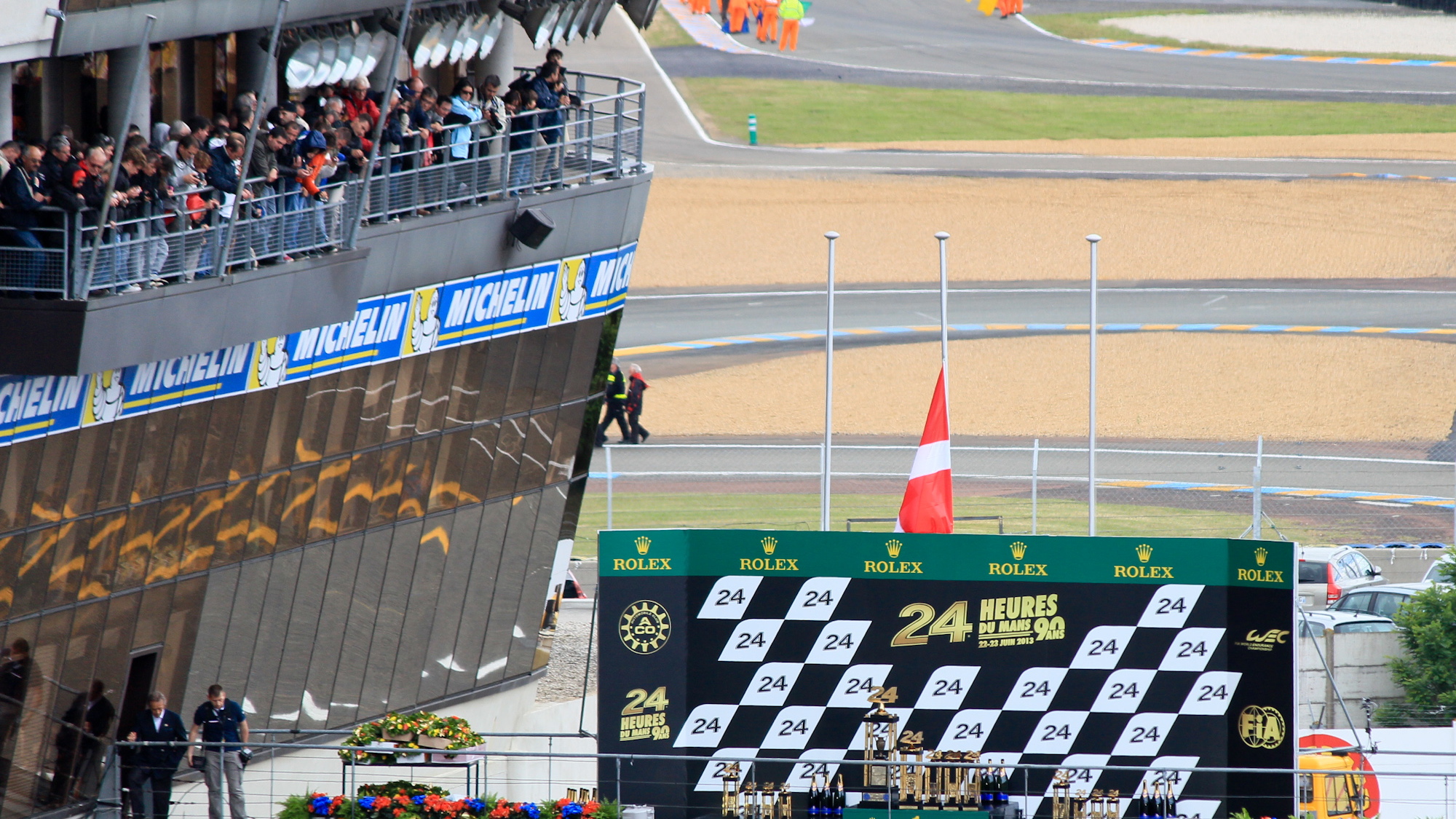 91
photos
The 90th anniversary 24 Hours of Le Mans was a fabulous, tragic race.

Marred early on with the death of Allan Simonsen, to whom Tom Kristensen of Audi dedicated his 9th overall race win from the podium, the 2013 running of the world's most famous 24-hour endurance race also put competitors through more ordinary--but still challenging--trials, including the rain that always comes at Le Mans, mechanical difficulties, and, of course, the never-ending threat of traffic between classes.

At the end of the trip twice around the clock, the winners celebrated with a muted sense of elation. The podium festivities were noticeably less enthusiastic than in past years, with the winning drivers standing beneath the flags of their own countries, where only minutes before, the Danish flag had flown at half-mast in remembrance of Simonsen.

Death is a part of any racing activity, whether the explicitly dangerous sort like the Isle of Man, or the more modern, more safety-focused events like Sebring, Daytona, or Le Mans. But it is no less painful for the families, friends, and teams of the racers who lose their lives, or for the fans. For Aston Martin Racing, that pain is still fresh.

Though the entire grid was conscious of Simonsen's death, the race had to go on, and it did, at times with abandon.

A total of 12 safety car periods involved 5 hours, 47 minutes of the race, largely for repairs to damaged sections of guard rail and barriers around the track after incidents, and once for rain. The final race distance was 378 laps of the 8.469-mile Circuit de la Sarthe, a total of 3,201.28 miles.

Intermittent rain, at times a light mist, at others a drenching downpour, added to the challenge throughout the race. The changing conditions at times favored certain drivers, teams, and cars over others, making it difficult to know with certainty where the true pace lay, or which would ultimately come out on top. As night moved back into day, it seemed anything could happen.

Perhaps the best story of this uncertainty in competition was told through the back-and-forth between Audi Sport Team Joest and Toyota Racing. Though Audi qualified all three of its R18 e-tron quattros at the top of the grid, the Toyota TS030s showed early pace, quickly moving from fourth and fifth to second and third, positions they held for much of the rest of the race.

As pit stops and fuel strategy began to play a role, positions changed constantly through the first daylight hours and into the night, the Toyotas making the most of their extra fuel load and horsepower, taking time out of the Audis on the straights, but returning it elsewhere each lap.

As lap times shuffled and strategies played out, the lead changed several times as well, with the #8 Toyota taking the lead from the #1 Audi on lap 14, but only holding it through lap 15. The #8 Toyota again regained the lead on lap 24, but again held it for only two laps. It wasn't until the 100th lap that an Audi other than the #1 moved to the front, however, when the #2 car, which would eventually win the race, took the lead and held it. The win marks Audi's 12th overall victory at Le Mans.

A driver error late in the race saw the #7 Toyota slide nose-first off the course, into the tire wall, with driver Nicolas Lapierre briefly climbing from the car. Once the car was moved out of the tire barrier and gravel trap, and the heavily damaged nose removed from the car, Lapierre managed to drive the car back to the pits and eventually returned to the race, eight laps behind the leaders.

The result was that the #3 Audi moved up a spot to third, which it held until the finish, giving Audi not just the win, but two podium spots. The #8 Toyota's second place, and fourth from Audi's final contender, the #1 car, however, highlighted the fact that this year's 24 Hours of Le Mans was, in truth, a battle, a real race--something which hadn't been a certainty at the outset, with lap times and balance-of-performance adjustments clouding the predictions.

As much as the LMP1 battle dominated the front of the race, there was fierce competition throughout the field, in LMP2, LMGTE Pro, and LMGTE Am.

Though in the end each of the steps of the LMP2 podium were separated by a lap, the racing was no less fierce or fraught with danger, facing both faster and slower traffic from LMP1 and GTE-class cars. Ultimately, it was the Morgan-Nissans of OAK Racing that took the day, finishing first and second, with the winning #35 car 19 laps behind the winning Audi.

The final LMP2 podium spot was taken by G-Drive Racing's #26 Oreca 03-Nissan entry. Interestingly, and in its own way, illustrative of the challenges of endurance racing, the winning OAK Racing car's fastest lap was about two seconds slower than the fastest laps of the second and third place finishers in LMP2.

Returning to Le Mans with a new car, SRT Motorsports' Viper GTS-R managed 8th and 9th between its two teams. Only formed a year ago, the team's performance was perhaps underwhelming given the Viper's reputation for performance and its history, including three consecutive 1-2 finishes from 1998-2000, but was a strong result for a first return to Le Mans.

The strongest American result in GTE Pro was the #73 Corvette C6-ZR1 of Corvette Racing, finishing just three laps out of first place in fourth. The #73 car's fastest lap was a 3:57.061, set on the 269th lap of the race. The #74 sister car managed seventh place, with two AF Corse Ferraris slipping between it and the #73 Corvette.

After 24 hours of intense racing, with all of the ups, downs, and heartbreak of strategy, pace, and accidents, and despite Allan Simonsen's fatal crash, it is clear that endurance racing, and especially World Endurance Championship racing, has struck upon a formula that works.
The WEC formula doesn't just work for the teams, or the fans, or even the manufacturers, but for all of them: it gives us thrilling racing at some of the world's greatest venues, in cars that alternately point the way forward for automotive technology in general, or highlight the strengths of the machines already on the road.

Fortunately, fans of WEC racing in the U.S. have more to look forward to this season, with six races remaining on the schedule, including a stop at the Circuit of the Americas in Austin, Texas. And of course, next year, Porsche will join the LMP1 fray, and already, the heat is building with VW Group sister brand Audi.

Look forward to more WEC race coverage from Motor Authority in the months to come. If you've missed anything, be sure to catch up on all of our 24 Hours of Le Mans coverage here.