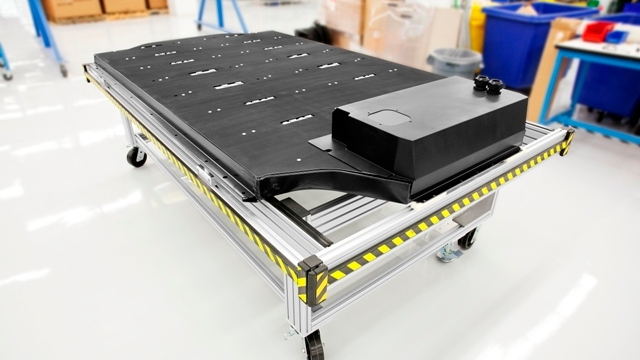 3
photos
Tesla CEO Elon Musk last night provided details on a new battery-swapping service for his company’s Model S electric sedan (and future models) that will allow owners to get a fully charged battery swapped into their cars in around 90 seconds.

Musk demonstrated the service using a pair of Model S sedans and also showed how swapping the battery is even quicker than filling the tank of a conventional gas-powered car.

The battery-swapping service will be done at special stations to be launched from this year. The first stations will be located next to Tesla Motors [NSDQ:TSLA] Supercharger stations along the high-traffic corridor between Los Angeles and San Francisco.

More battery-swapping stations will follow, with the next launches to take place along the corridor running between Washington D.C. and Boston.

Owners simply drive over a specially marked spot and remain in the car. An automated machine then emerges from a hole in the ground and swaps the battery with a fully charged one. For even more added convenience, the station will bill the owner’s pre-registered credit card for the service.

Unlike the Supercharger stations that provide free charging of the battery (50 percent charge in 30 minutes), the battery-swapping service will cost between $60 and $80, according to Musk, which he explained was comparable with the cost of filling a 15-gallon tank of gas.

One condition is that drivers must swap back their original battery (stored at the station) on their return trip or face paying the difference in cost for the new one, which comes with its own warranty. The warranty is the balance of the standard 8-year term, dependent on the age of the pack you received.

The cost of each of the stations will set Tesla back around half a million dollars. However, Tesla is committed to making an electric car an option for mainstream buyers, even if that means going to extra lengths (relative to most other automakers) to rid people of any doubt of buying one.

As we reported earlier, Tesla isn't the first company to have the idea of hot-swapping battery packs for quicker range extension of an electric car. Project Better Place, which was partnered with Renault, had high hopes for just such a system. Unfortunately, it couldn't bring the reality to market before going bankrupt.