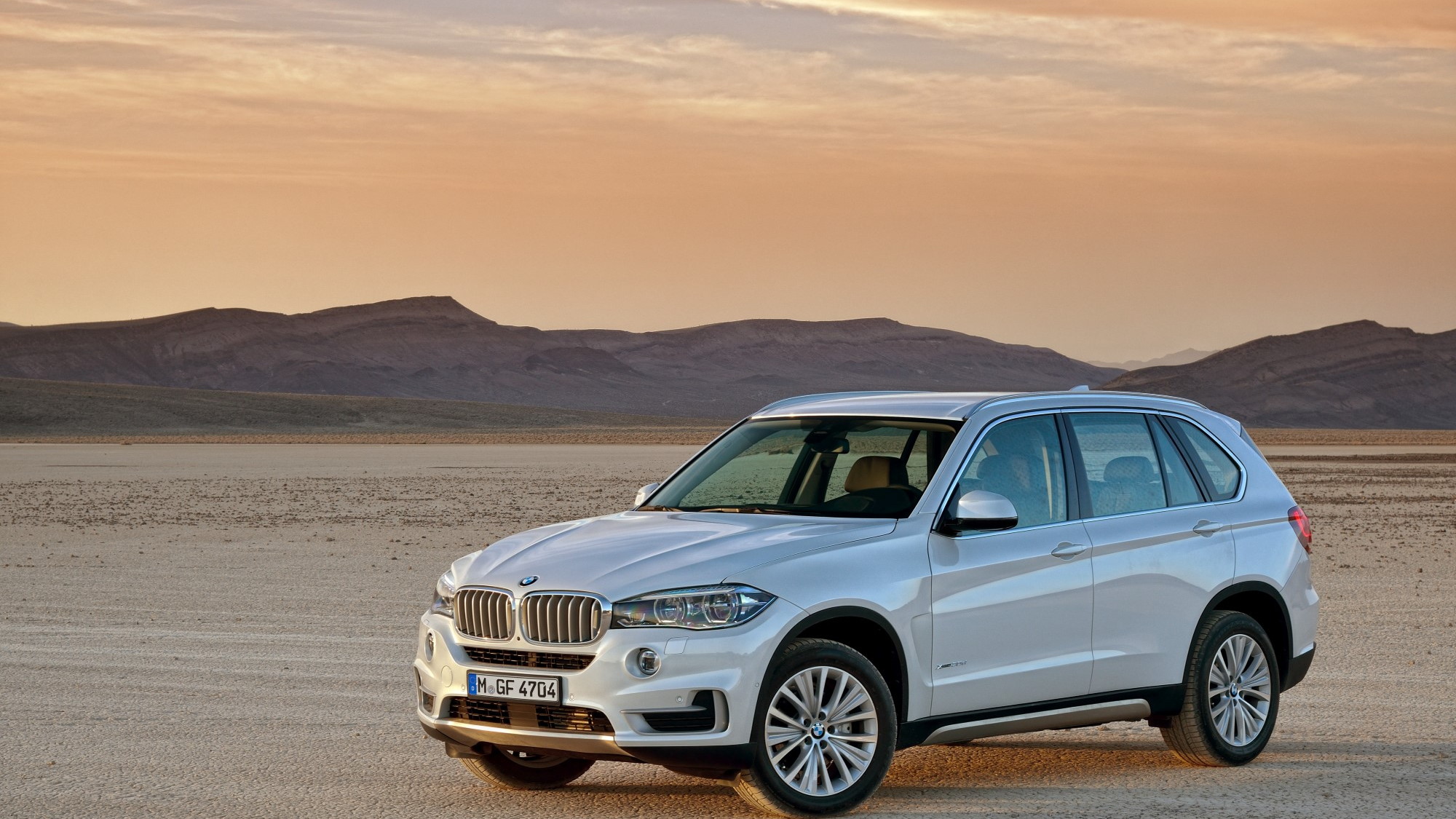 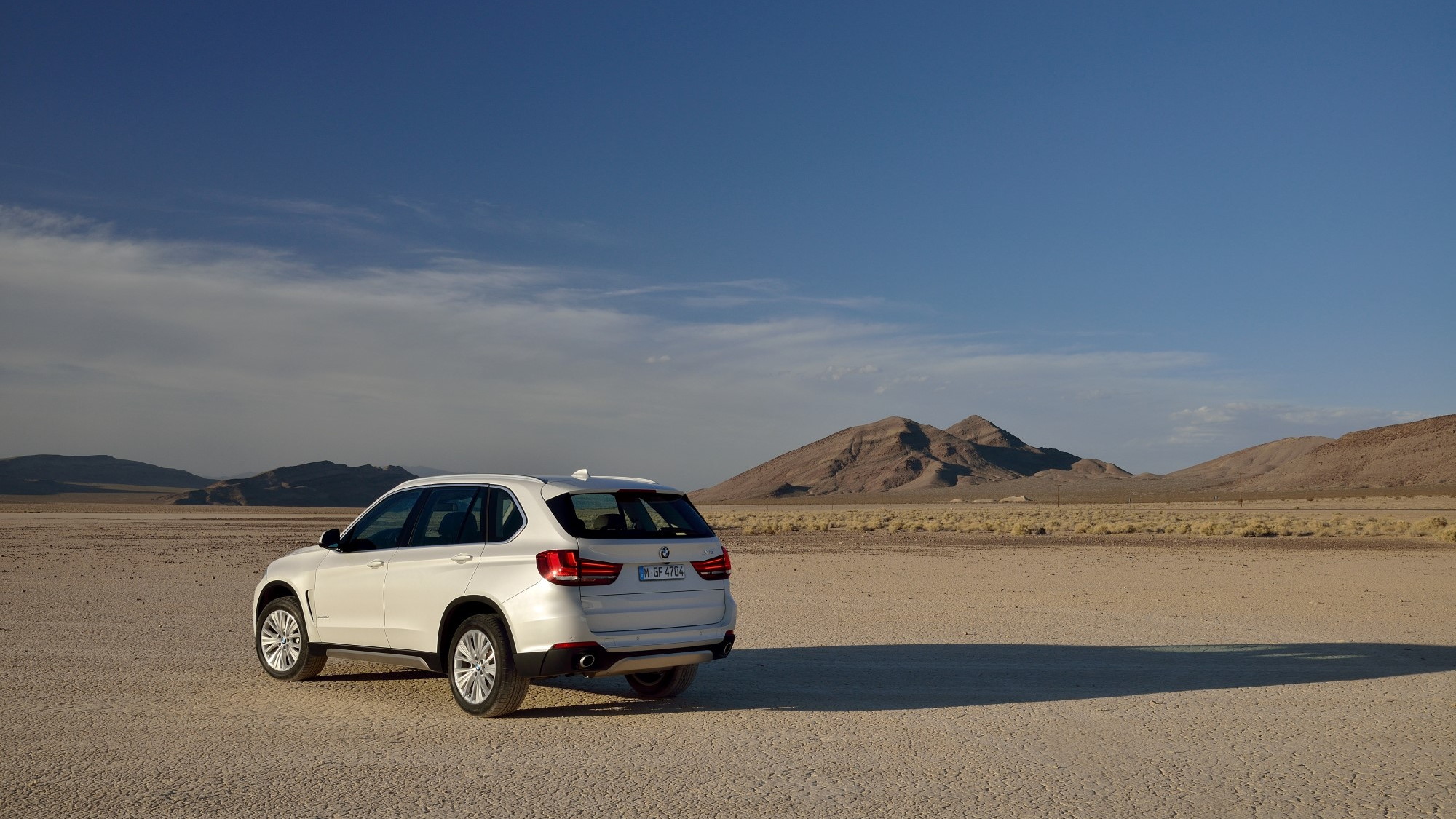 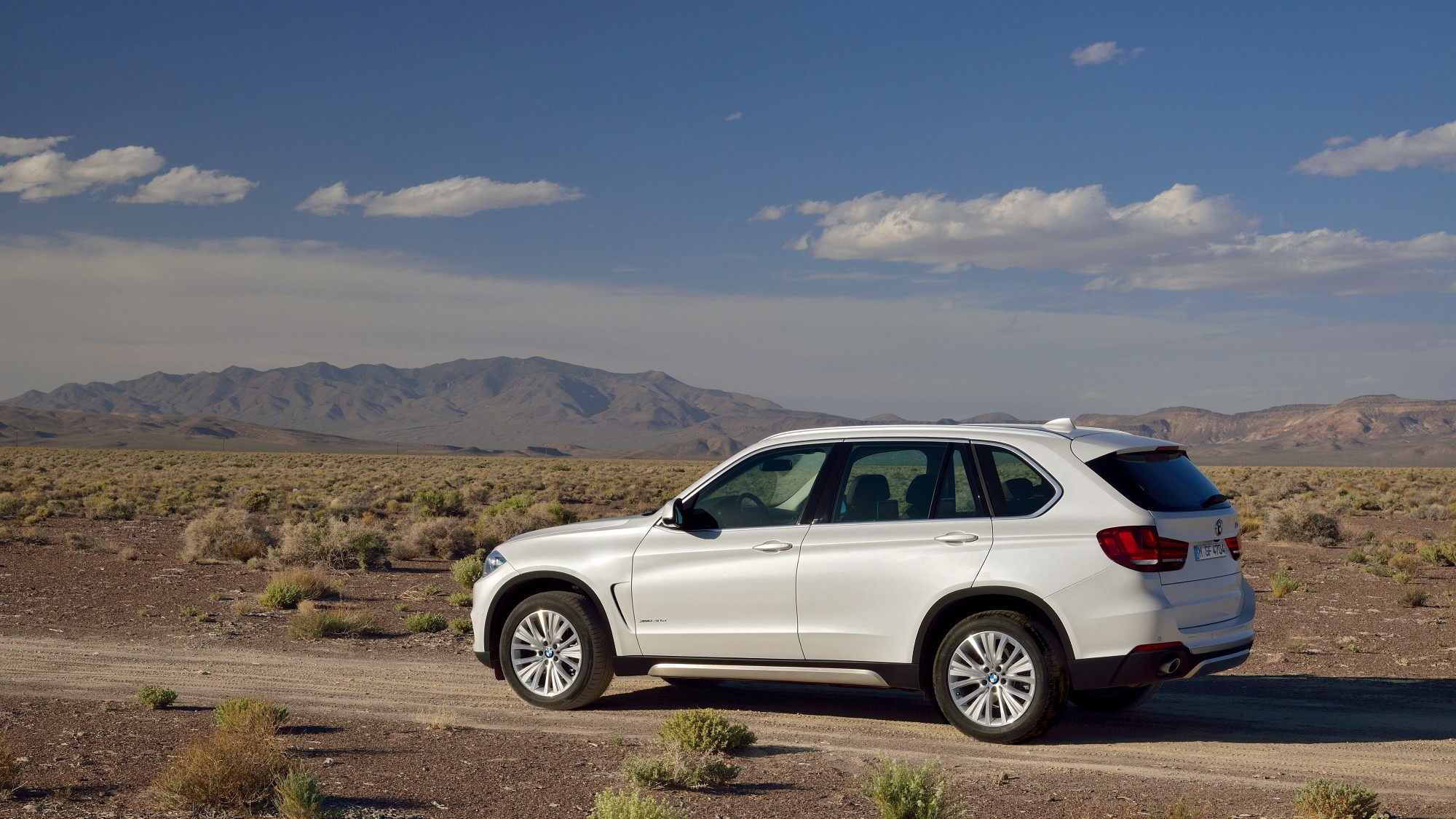 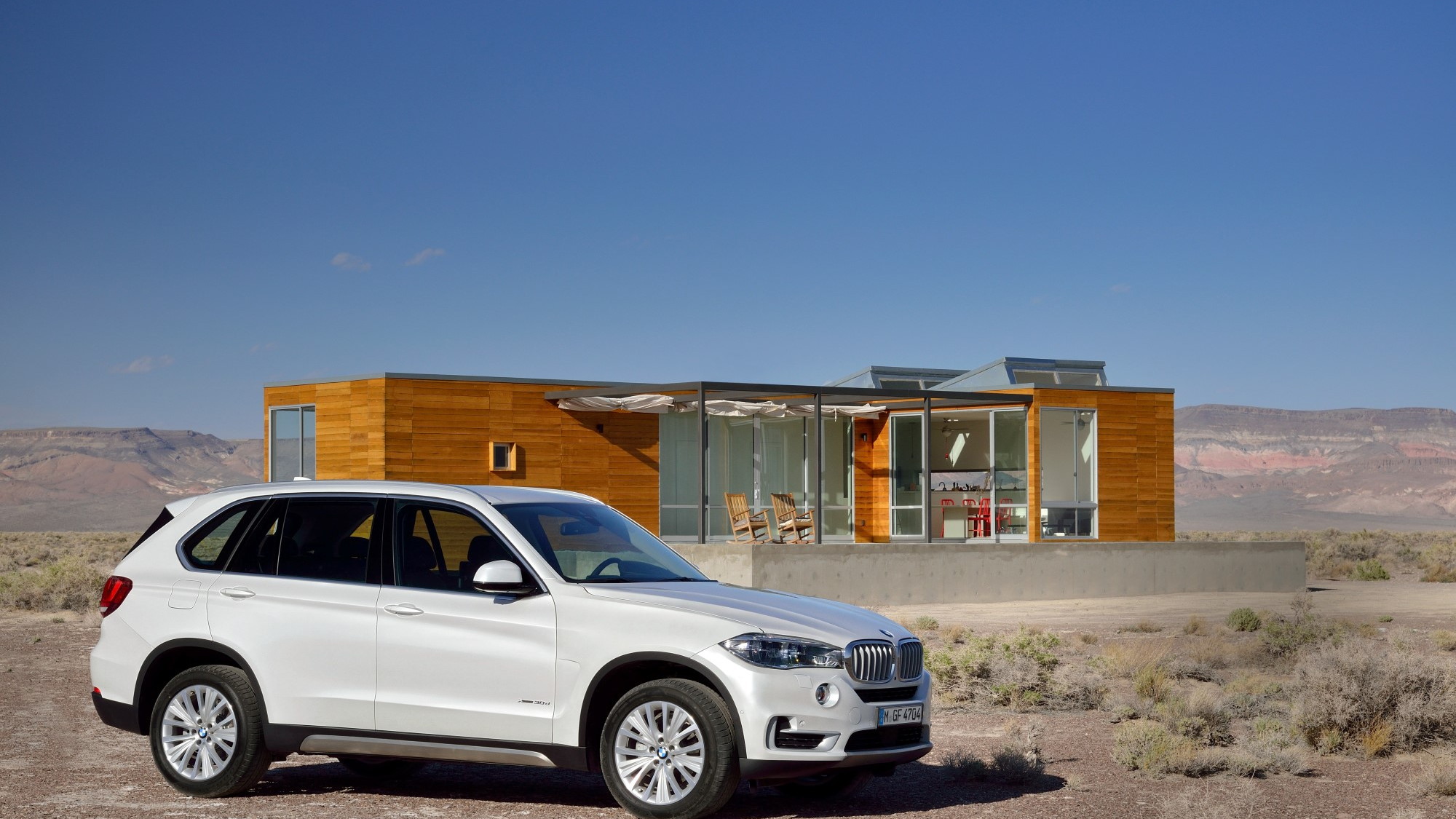 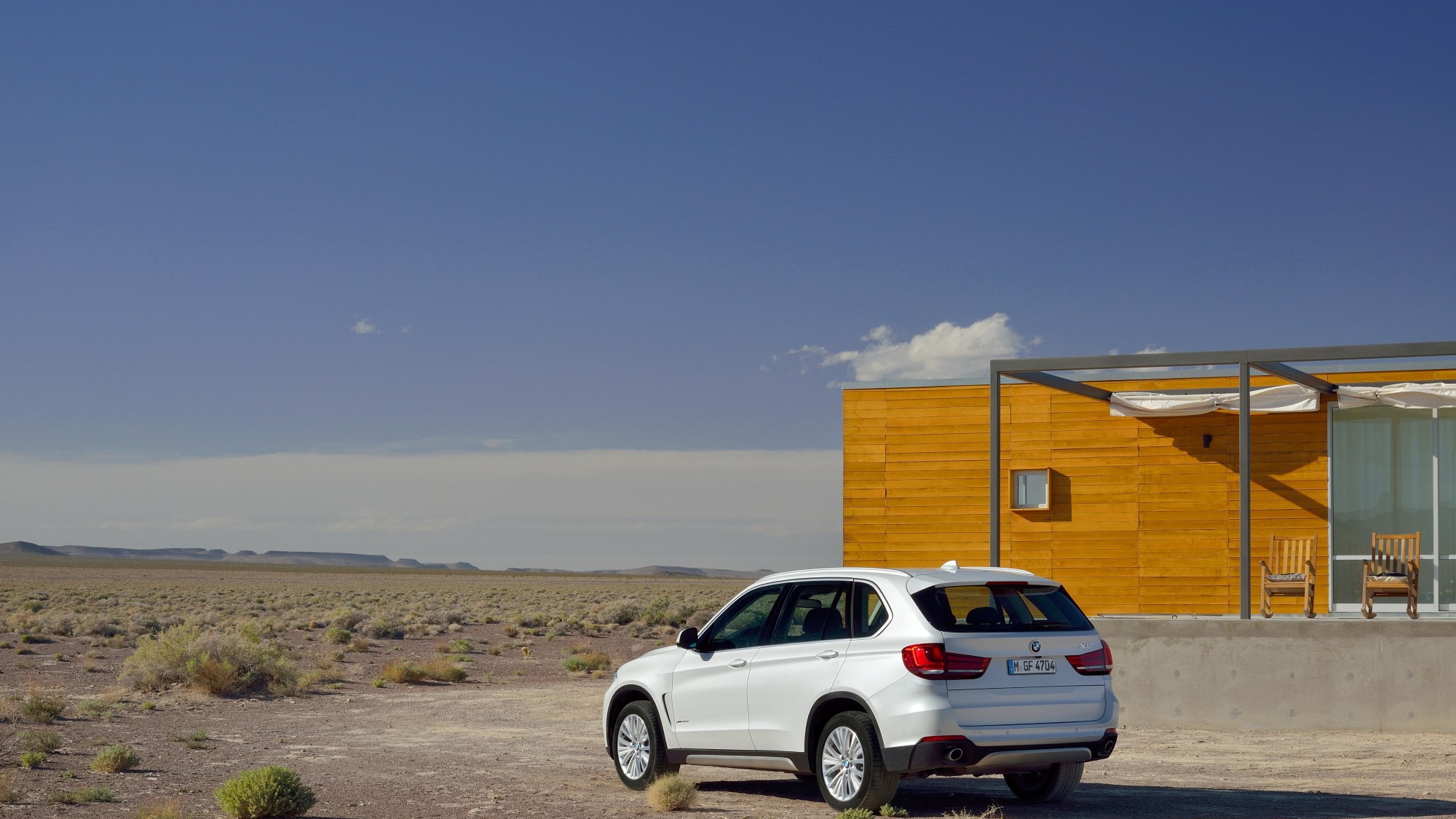 63
photos
It might not seem like BMW has been selling its X5 for 14 years, but it has--the original debuted in 1999. Over the generations, the X5 has grown larger and higher-tech, but offered few "firsts" along the way. For the third-generation X5, that changes: this is the first BMW "sport activity vehicle" with available rear-wheel drive.

That's right--the 2014 BMW X5 will be available in sDrive35i trim, driving the rear wheels only. All previous BMW X-Series vehicles have come with standard all-wheel drive. The rest of the 2014 X5 range continues with all-wheel drive, of course.

Gasoline engines are unchanged from the current X5's offerings: the N55 3.0-liter turbocharged in-line six-cylinder still rates 300 horsepower and 300 pound-feet of torque in sDrive35i and xDrive35i models; the xDrive50i still gets a twin-turbo 4.4-liter N63 V-8, but updates increase output to 445 horsepower (up 45 hp) and 480 pound-feet (up 30 lb-ft).

The extra power allows the 2014 X5 xDrive50i to reach 60 mph in 4.9 seconds, a 0.4-second decrease. The six-cylinder xDrive35i hits 60 mph in 6.2 seconds. No time has yet been released for the rear-drive sDrive35i, but we expect it to be very close to the all-wheel-drive model's time.

A diesel engine will also be available in the X5 xDrive35d. The 3.0-liter in-line six-cylinder diesel generates 255 horsepower and 413 pound-feet of torque, pushing the X5 to 62 mph in 6.9 seconds.

The diesel, like the rest of the X5 range, also gets an eight-speed automatic transmission for 2014, to improve gas mileage. An ECO PRO mode helps maximize the eight-speed's efficiency improvements, but BMW has not yet released estimated fuel economy ratings. The eight-speed transmission also offers a new launch control function to maximize acceleration from a stop.

Specifically, the kidney grille is wide, stretching from headlight to headlight. The headlights retain the four-round-light look within their aerodynamically sculpted enclosures; all models come standard with Adaptive Xenon lights. Below the grille, the front of the X5 has low, wide side air intakes; underbody protection panels; and, new to the X-Series, drag-reducing "air curtain" apertures placed vertically to guide air around the wheels.

Along the sides, character lines give a wedge-like impression, while the relatively upright nose, windshield, and rear hatch angles give a sense of size. At the rear end, three-dimensional LED light strips inset in the two-piece L-shaped lights give some visual flair, while "aero blades" help channel air through the roof spoiler to further optimize aerodynamics.

These core characteristics can be customized through the choice of a range of exterior appearance packages, including M Sport, xLine, and Luxury Line styles.

Inside the 2014 X5, BMW seeks to emphasize the available space of an SUV. Horizontal lines and layered surfaces give a sense of width and depth.

The seats in the 2014 X5 have been redesigned, with greater adjustability and features for rear-seat passengers. A 40:20:40 split-folding second-row back rest is also available, and cargo area is up 7 percent to 66 cubic feet (by EU measurements).

Technology spans an ever wider realm in cars these days, moving from the dashboard to the instrument panel, the windshield, and even to the mechanical aspects of the vehicle.

For example, the X5 includes Driving Dynamics Control, which interfaces with the transmission, engine, and, on equipped vehicles, the Dynamic Damper Control to adjust engine responsiveness, shift points, and handling characteristics. The electric power steering feel is also tweaked for each of the comfort, sport, sport+, and ECO PRO modes.

Tying the driveline into the dashboard, all xDrive 2014 X5s come with a standard status display with 3D graphics that shows real-time body roll, pitch, and other details.

For the U.S., a 10.2-inch display screen is standard, and is the home for the ConnectedDrive connectivity/telematics system, BMW's Apps, and more.

On the safety front, BMW's high-tech approach includes the Active Driving Assistant package and Active Cruise Control with Stop & Go. The Active Driving Assistant package includes lane departure warning and a pedestrian collision warning with braking function that operates at speeds up to 37 mph, detecting pedestrians or vehicles in the X5's path and applying "moderate 'hazard' braking" to avoid or minimize collisions.

The Active Cruise Control with Stop & Go system is a taste of the semi-autonomous driving we've begun to see at other carmakers and in other models. With the ability to cruise at speeds up to 130 mph, using its radar sensors to follow at a safe distance, or to brake automatically in stop-and-go traffic, the system lacks only steering control to match some other high-tech systems.

That deficit will be handled from December 2013 onward, however, by the Traffic Jam Assistant, which adds steering control to keep the vehicle centered in the lane in addition to following stop-and-go traffic--but only at speeds up to 25 mph.