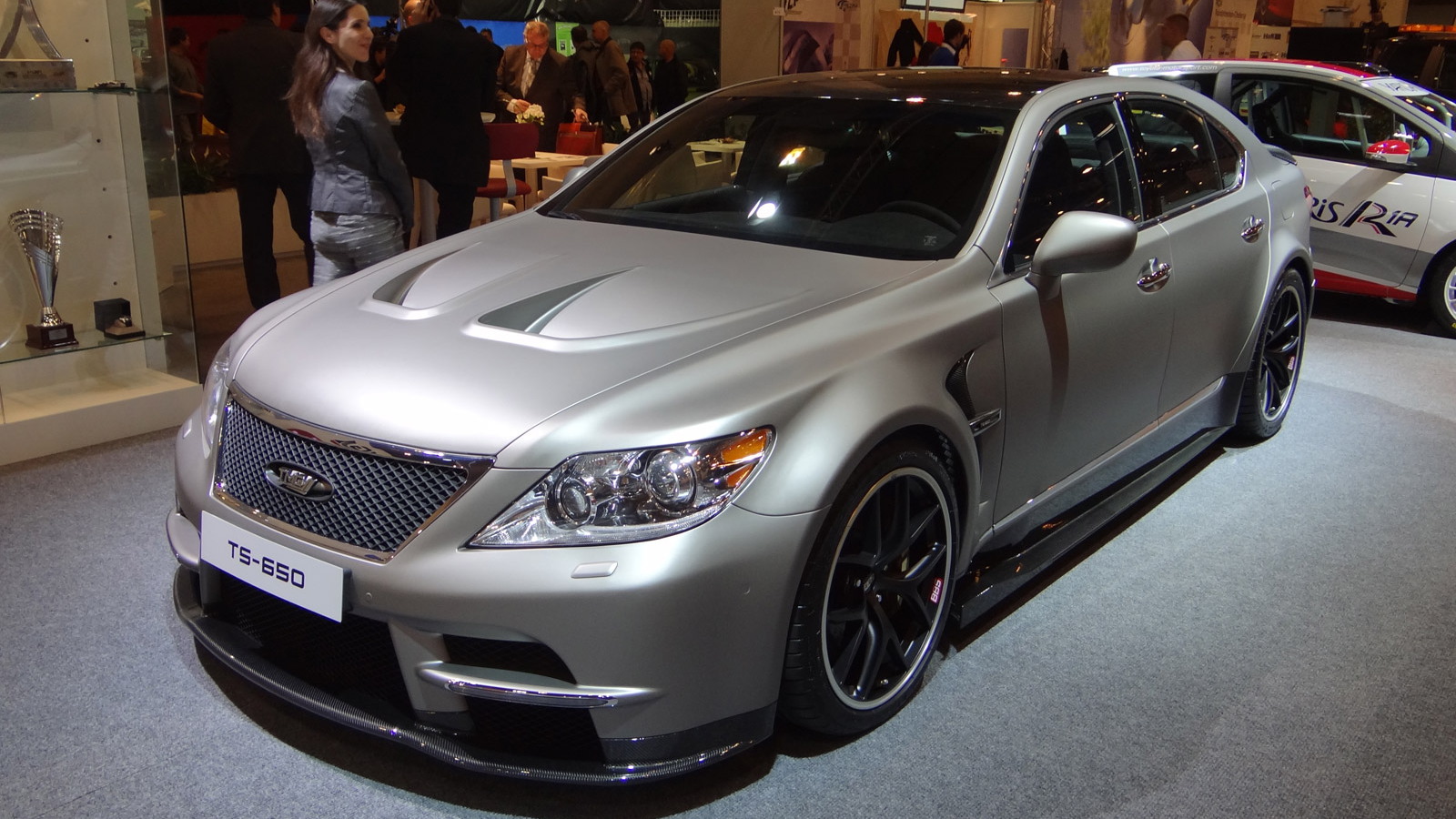 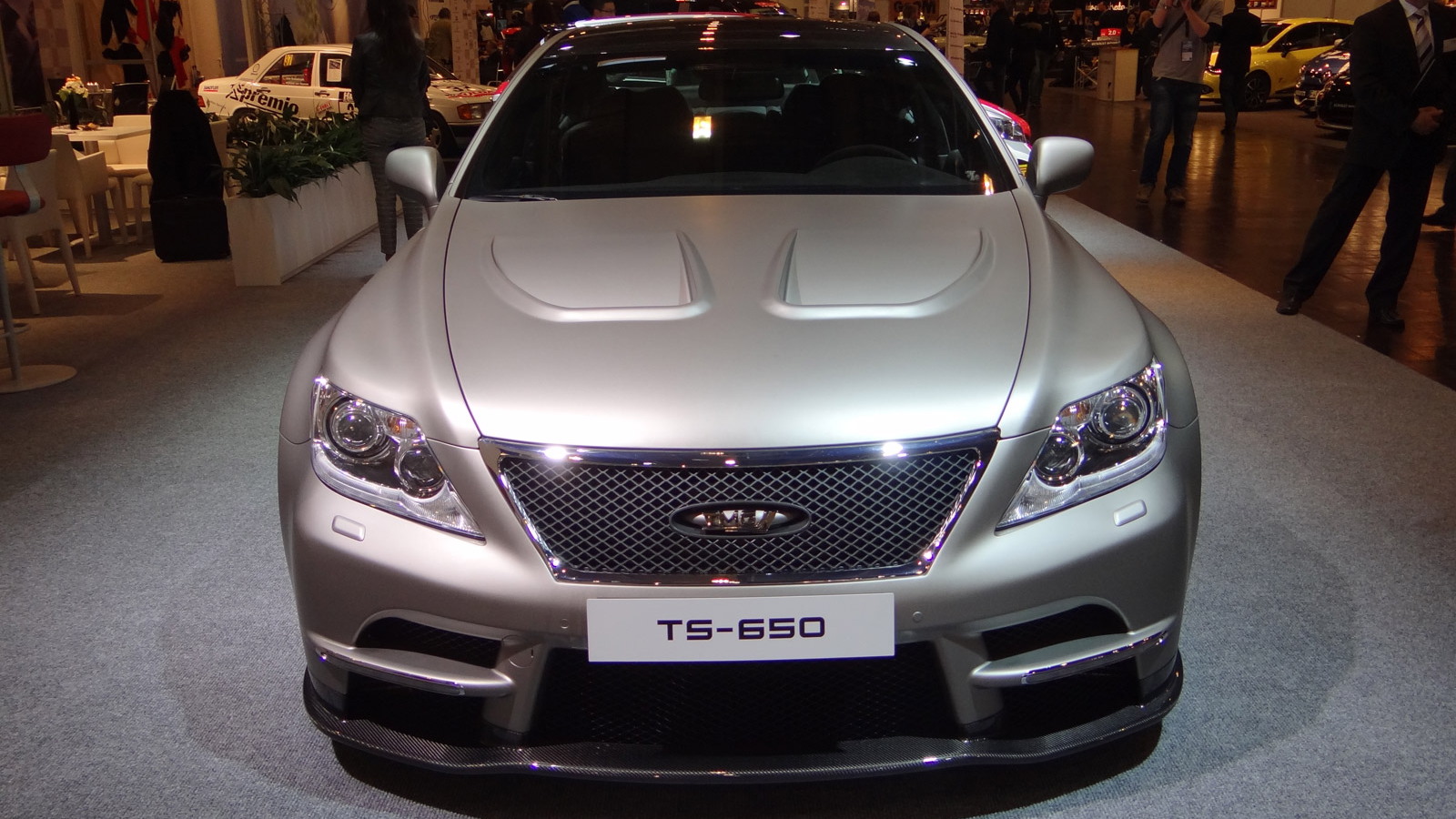 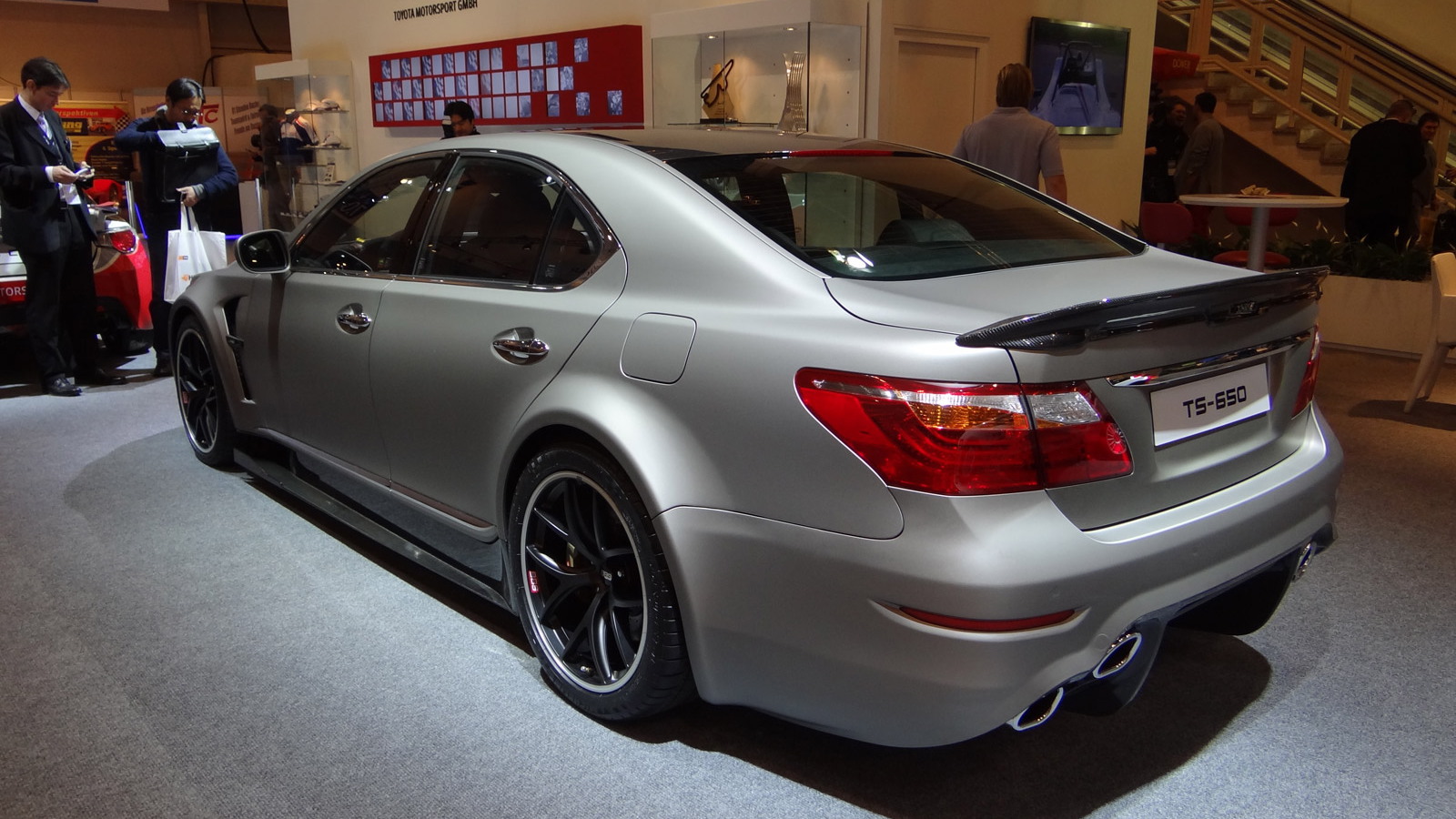 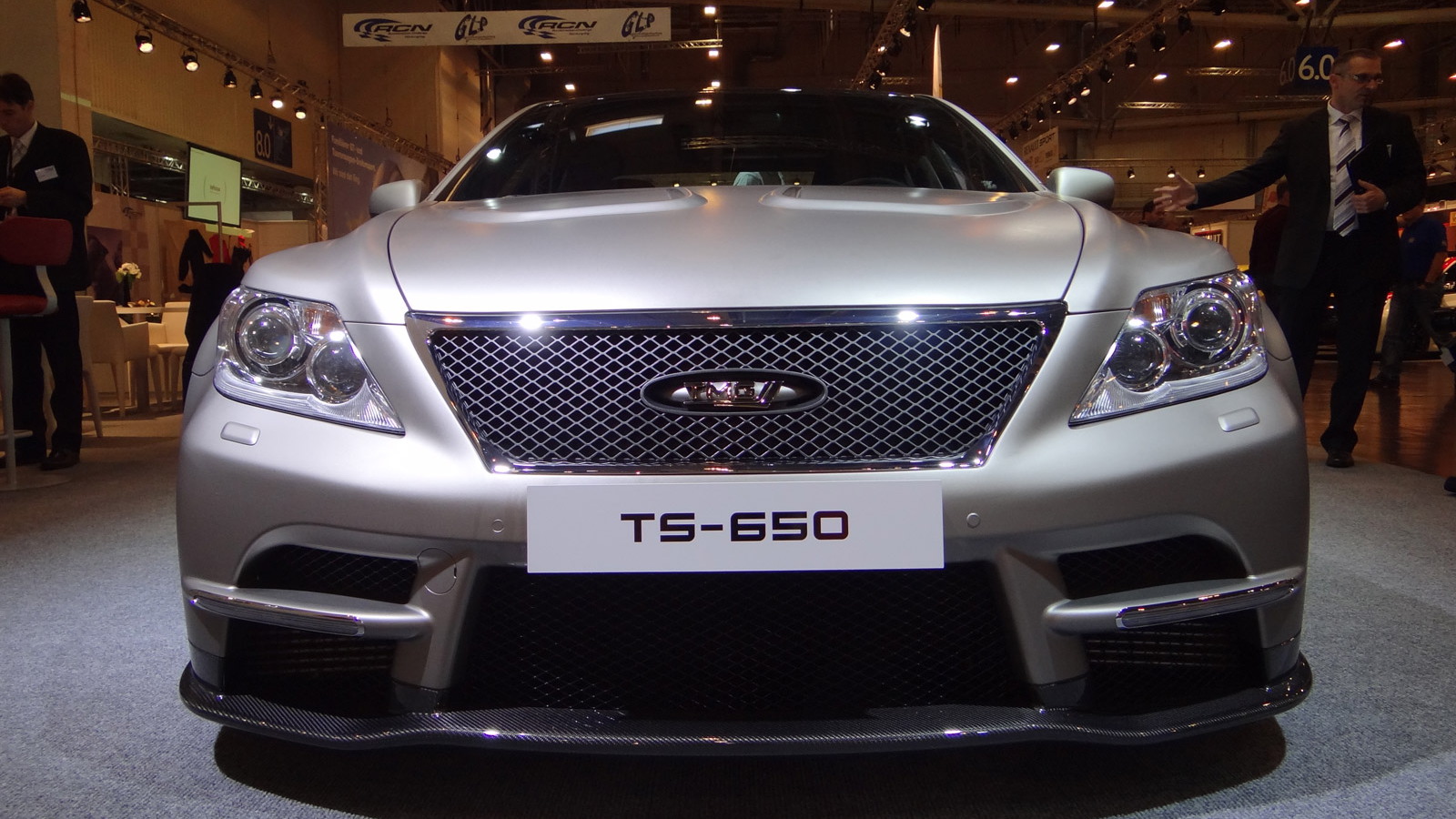 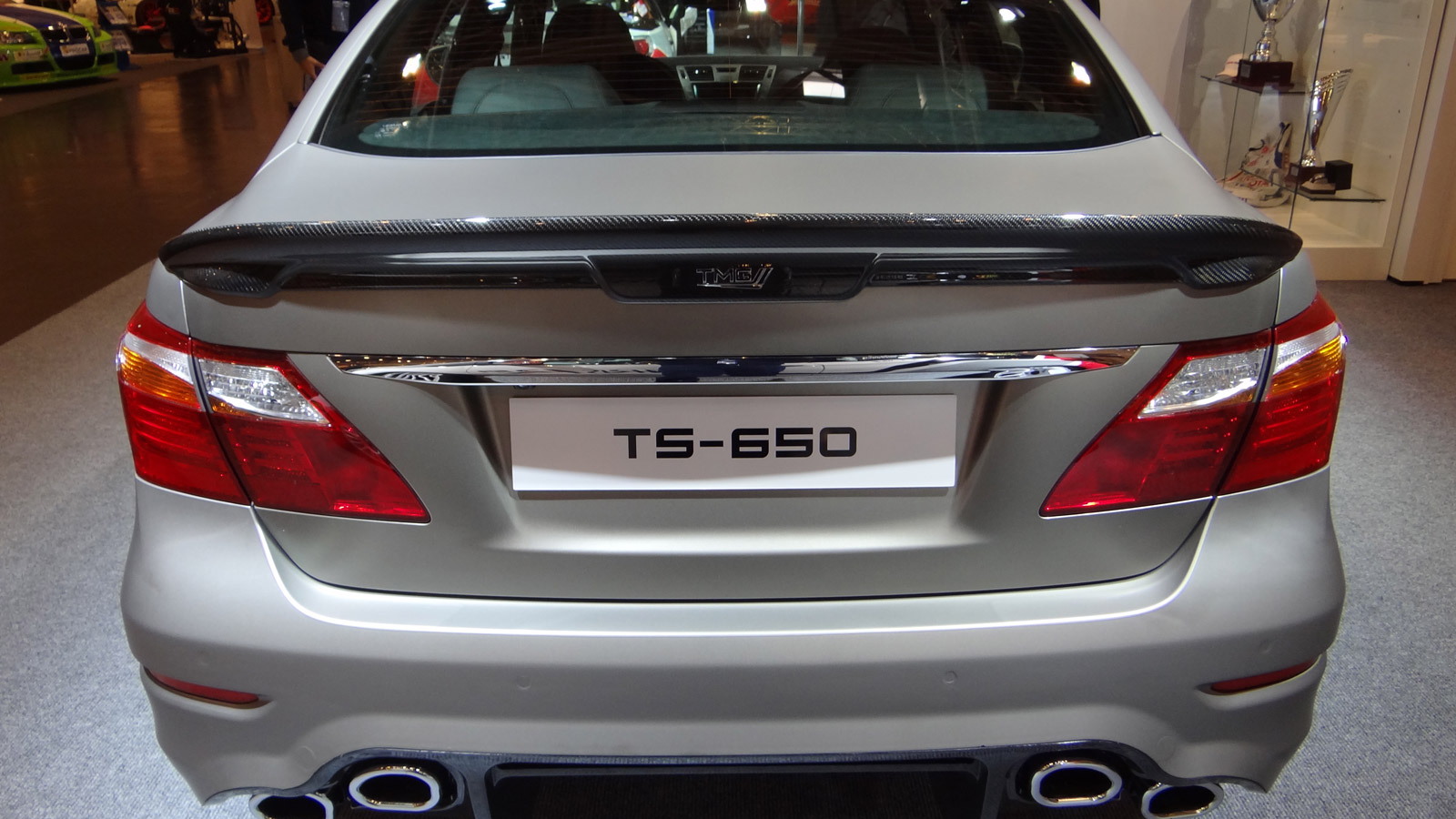 25
photos
Already renowned for building some of the most capable race cars on the planet, Toyota Motorsport GmbH, the company behind Toyota’s former F1 program and current hybrid Le Mans prototypes, has set itself a new challenge: to build a car that’s not only fast, but comfortable too.

It was this design philosophy that led the company to build the one-off TMG Sport 650 (TS-650) concept car, which made its debut today at the 2012 Essen Motor Show in Germany.

The design philosophy was also the reason TMG chose a Lexus LS luxury sedan for its first-ever road car project, instead of a more natural choice such as a Lexus IS F or Scion FR-S sports car.

The first thing you’ll notice from our live photos is just how over-the-top the TS-650 is. Starting with a LS 460, TMG engineers stripped the car down to its shell, replaced the regular engine with a twin-turbocharged version of the IS F’s 5.0-liter V-8, and then went about improving the performance of virtually every other aspect.

Here, the reason was to showcase the breadth of TMG’s tuning capabilities. TMG admits its TS-650 concept is extreme but explains that future projects, if given the green light, will probably be scaled down in terms of performance.

How extreme is the TS-650? According to TMG, its engine delivers 641 horsepower (650 in metric figures) and 564 pound-feet of torque. Drive is sent to the rear wheels via an eight-speed automatic transmission that’s been modified to handle high torque levels. It also has a manual mode for sportier driving.

Under the TS-650’s mix of steel, aluminum and carbon fiber panels is a Torsen-type limited slip differential in the rear and multi-link suspension with coil springs and Sachs dampers. The wheels are lightweight BBS units measuring 20 inches in diameter and are shod with 295/35R20 Michelin Pilot Sport tires. The brakes are carbon ceramic units from Brembo.

Initial testing at the Nürburgring, less than an hour’s drive from TMG’s headquarters in Cologne, Germany, has been promising. The company says its TS-650 needs just 3.9 seconds to accelerate to 60 mph and will keep going all the way to 200 mph. A Nürburgring lap time will be set as part of the concept’s evaluation process.

For now TMG will continue to gauge the public’s interest in its concept, and the company states that so far the response has been overwhelmingly positive. In fact, TMG says production is a possibility, should it receive enough orders for the car, and this could then lead to future products--the independently run firm already has the full support of Toyota behind it.

As for whether we could see TMG become a dedicated performance brand of Toyota or Lexus, similar to what AMG is to Mercedes-Benz and the M Division is to BMW, it’s still very early days. TMG concedes that these things take time, and Toyota already has its TRD performance accessories line while Lexus has its F range.

Should TMG start building its own models, they will be offered in exclusive runs of just a handful of cars at a time. Though it has the facilities to build virtually anything from scratch, building significantly higher volumes is still not possible for the company.