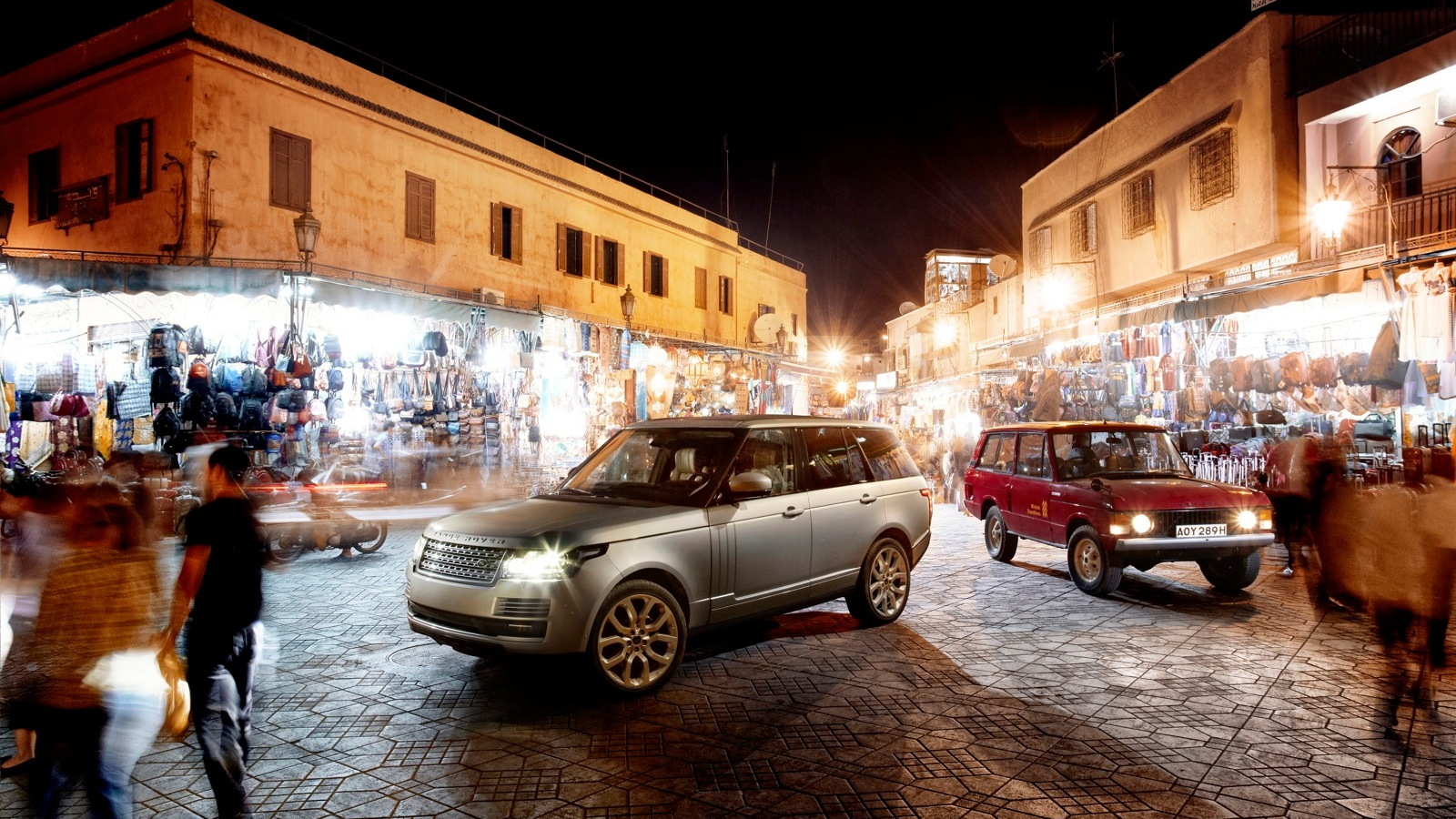 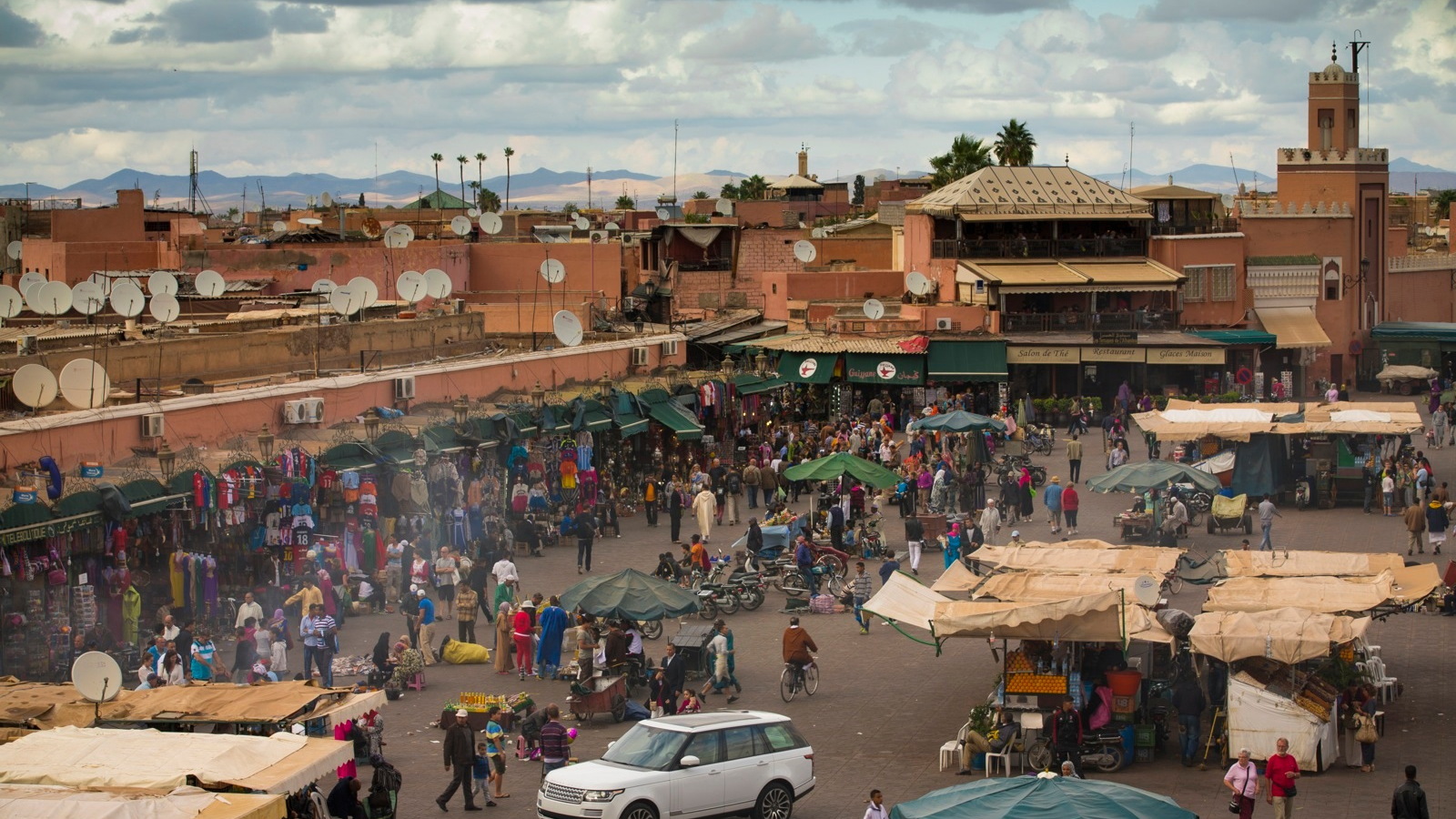 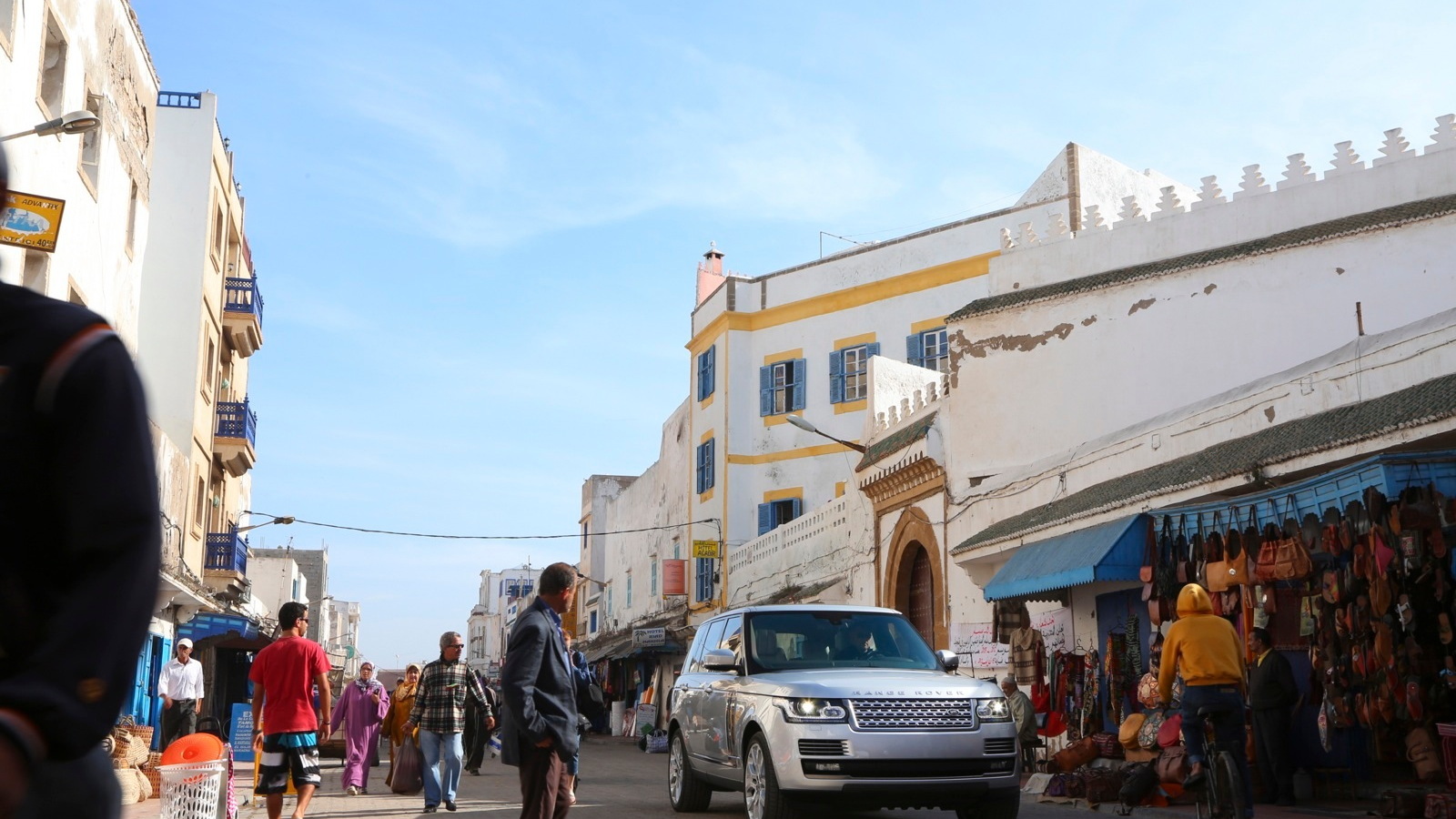 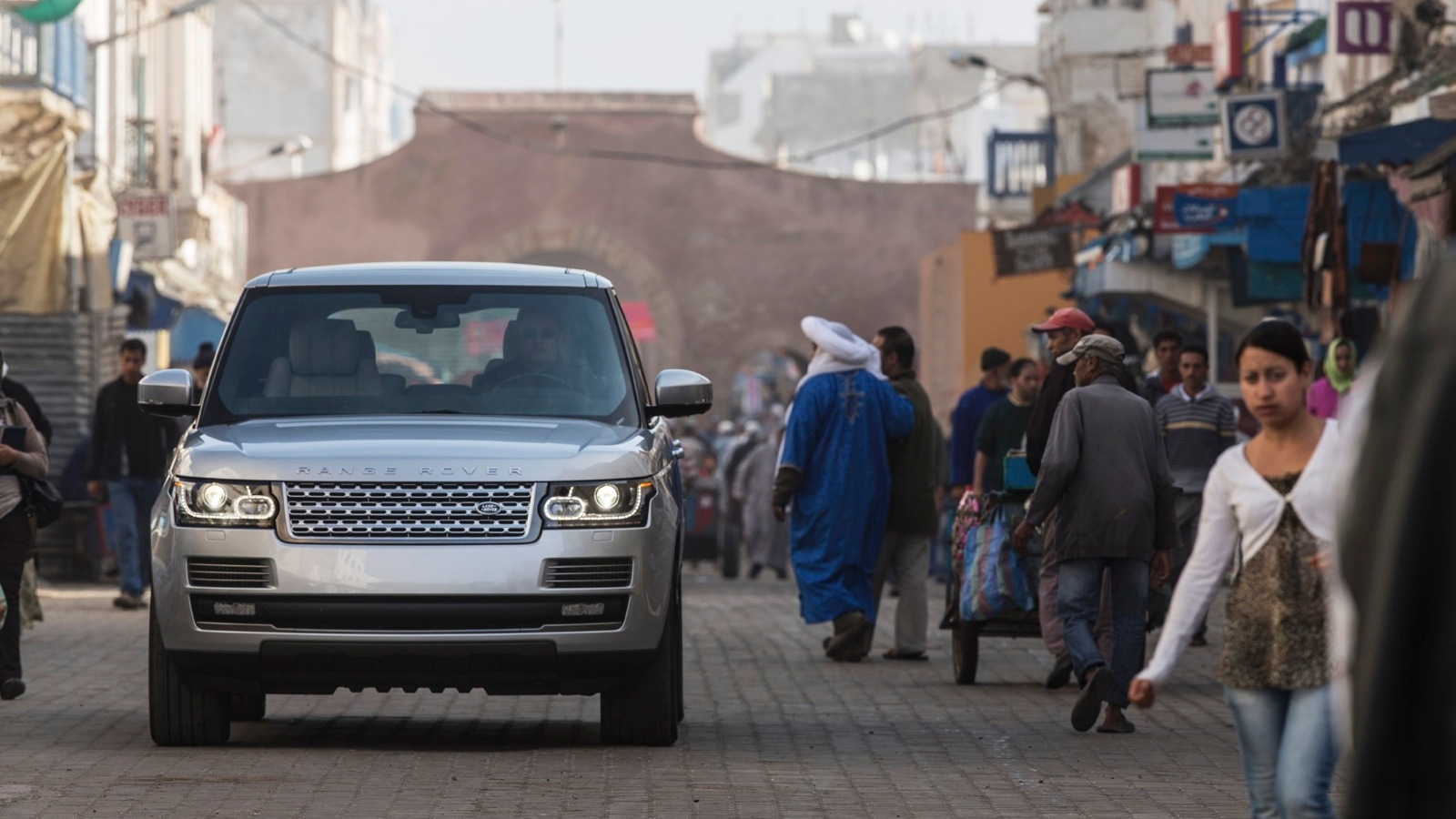 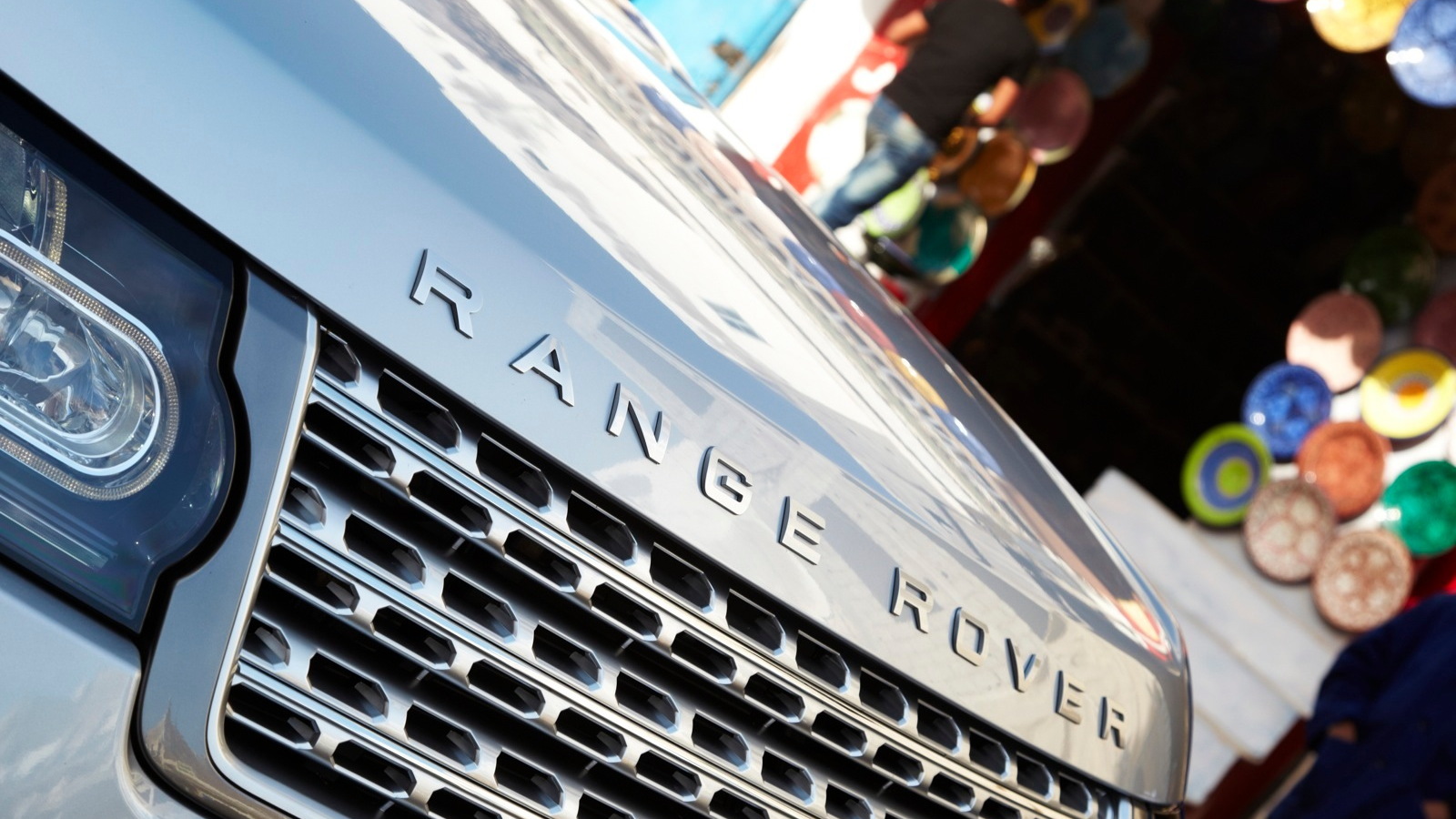 Forty years ago, the plan was beautiful: take the first Range Rover to Morocco to show off its dune-stalking, terrain-conquering prowess and bedazzle the world's press. A popular uprising has a way of changing history and itineraries--like so (sweeps arm across desk)--so the launch was scrubbed.

Fast-forward to 2013 and there's a new Range Rover, and this time we were among the bedazzled-to-be that charted a path for Morocco, to hook up with the global first drive. After a year of seeing Egypt, Tunisia, Libya and Algeria break out in unrest and outright revolution, the omens were dark. Only this time, the problem wasn't civil, it was meteorological. Perfectly timed for our American-media wave, Morocco was hit by unseasonable monsoons and an almost unfathomable gale.

Wait...isn't this the Sahara Desert?

Not quite, and Morocco isn't quite the outpost to nowhere you might conjure up from an old Encyclopedia Britannica. It's been a nation as long as America, but only independent in its latest form since the 1950s. It's physically stunning, rimmed with Atlantic sand and capped with some of west Africa's highest mountains in the Atlas range. Think Arizona and New Mexico, only doubled. It's a monarchy with a foot planted in Islam and a hand extended to the West, with 30 million people today, a number that's growing rapidly.

Cooler yet, just three hours and change from London by plane, Morocco was a popular refuge in the Sixties and Seventies for rock stars looking for a place to tune in, and drop out. Morrison made a pilgrimage here. So did Hendrix. And of course, so did Zeppelin. From touchdown, you know why--it's Kashmir for day trippers. And now, we're finally here.

And it's already raining.

The Range Rover would be the vehicle you'd want in your corner when the skies curdle. So while we'd planned to scud across sand dunes and kick up roostertails of video delight, baked by late October sun, we're stalking drizzle and making muddy new trails from the moment we press the start button. Forty years ago we might have been carving new paths up the hillsides that are rapidly being compromised as we head out for a 400-kilometer drive down the shore to Essaouira, then inland over the mountains to the metropolis of Marrakesh. As it turns out, we'd be doing the same thing this time.

Back then, we'd have been cutting the trail in a more rudimentary country-estate wagon that wouldn't be in its element until it was rolling around in the elements. Today, we're cruising in the $135,000 Range Rover Supercharged Autobiography, a leather-lined, wood-empaneled piece of art, sharing an Unhappy Meal with Adele through 29 speakers and 1,700 watts of digitally processed sound on the way to a hotel with the word "Palace" in its name, and a wading pool associated with almost every room.

The Range Rover has to blend into both worlds, and the latest one does. It's less a dramatic U-turn down the SUV road than a gentle pull at the edges of the envelope. The details have been buffed down just to hints in places--the grille's the smallest one on a Range Rover this side of the Evoque. The floating glass almost breaks free entirely of the slim roof pillars. The rugged archetypes are almost completely filed down, even more so in the striking cockpit where semi-aniline leather on the headliner and twin LCD screens represents the most weatherproof version you can buy. Shift levers? Try rotary knobs for the transmission, or try the paddles. Off-road driving mode? There's a knob for that, too--but for a little more, the Range Rover will even take care of that decision for you. It's a quiet riot of leather and veneer and chrome that, minus a steering wheel, would make one fantastic executive suite.

The crumbling road from Essaouira to Marrakesh

One of the rules of off-roading is, the trail's never the same twice. Pass through and you've changed it for good for the next driver. How true it'd be, as an Atlantic storm buffeted our gravy train from the coastal resort of Essaouira and its dunescape, to a waterlogged Marrakesh.

The Range Rover's essentially two vehicles bundled in one--both useful as we sloshed over dunes packed down by already substantial rain. At once a V-8-powered, air-sprung luxury car, the aluminum-bodied Range Rover's still a deeply capable off-road vehicle with a locking center differential, a five-mode traction and stability system that adapts its systems (steering, suspension, throttle) as conditions require, and the ability to push itself out of trouble with those height-adjustable air springs--or pull along up to 7700 pounds of trailer weight.

The dunes give us a great lesson in the Rover's "Sand" mode and its low gear range. Switched into low and manually into Sand (it can also detect the need for the mode and dial itself in), the Range Rover lets in plenty of throttle with just a toe on the pedal--enough to kick loose the surface and to "paddle" across it. It digs through almost every angle and slides down light grades with hill-descent control doing everything but fetching us tea. But we do get stuck, once. We're routed around a growing stream into a deep hole, and the longer Rover's just a bit too long to extract itself without going into its extended-height mode. That's simple: press the ride-height button and it lifts the air springs to a maximum height for 10 seconds, long enough for us to burrow to a movable path.

The rain's pounding by the time we arrive at a private villa for lunch. We're driving sheets of water sky-high as we convoy in--and during a quick meal the wind goes sideways, pushing drops through the windows of what should be a sunny Moorish atrium. But it's nothing compared to the next stretch of off-roading--a loop up and along the Atlas Mountains on a red-dirt trail that's losing chunks of itself in landslides as we drive.

Our guides get the credit for nimbly refactoring the trail ahead into something navigable, but the Rover gets its own kudos for handling the slick trail. It barely takes a flick into Mud mode and we clamber up to a few thousand feet of elevation on a mountainside that looks for all the world like Taos Ski Valley. The road's so completely gone in one stretch, we go back to low range and into rock-crawling mode, and ease the Range Rover down a sharp-edged patch of granite that connects the broad curves of the trail that leads back down the mountain--back down to pavement, into Marrakesh.

Fit for a king

The highway that arrows into Marrakesh is flat and uninteresting, and there's a rest stop with a gas station that looks just like the newer ones on the Ohio Turnpike. It's perfect: the long stretch of uninterrupted road lets us press the Range Rover up and over 100 mph, to get a better sense of the relatively soft-sprung ride and light, quick steering we'd felt on wetter turns earlier in the drive.

Still, we pay rapt attention to the first commandment offered up by the organizers: Morocco's drivers "will definitely not be checking their mirrors. Just...look out."

Over a few hundred kilometers, we stay alert, and swap off with back-seat stints that demonstrate exactly why this Range Rover is so different from the ones in the past. The cabin's opulent, but nowhere more so than in the back seat. The longer body grants more rear leg room--critical for more sales in places like China, not so critical for three rows of seats, which Land Rover says aren't quite right for a vehicle so posh. The space back there is enormous, limousine-like. A panoramic roof bathes it in light, and with the Meridian 29-speaker system, the back-seat passengers are shrouded in speakers, if not pounded into submission by bass, the system's weak point. The opulence extends to a new two-seat package that fits bucket chairs with heating, ventilation, recline and massage functions, even a cooler box between the seats, even DVD screens mounted in the headrests of the front seats.

The back seat tells the most important story of this new Range Rover. Land Rover's unapologetic about wanting more sales for its brand icon, and it's audaciously targeting some unexpected vehicles to get there. Think Flying Spur, Ghost, S Class as well as GL Class. To get there, it needed a larger back seat; to get that without getting too large or heavy, it needed lightweight construction.

That virtuous circle makes for one impressively capable luxury vehicle. One that's right as rain. We have the proof.