When it comes to minimalist cars that deliver maximum driving pleasure, few are better known than the Ariel Atom. Beloved by Top Gear’s Jeremy Clarkson and distributed worldwide, the Ariel Atom is very much a modern interpretation of Colin Chapman’s philosophy behind the original Lotus Seven: add lightness.

To that end, the Ariel Atom has never included amenities like an audio system, heat, air conditioning, roof or windshield. Instead, buyers get reasonable horsepower and a tube-frame chassis that delivers intuitive handling. Given its sparse concessions to comfort, it’s perhaps best to think of the Atom as a four-wheeled motorcycle.

Now Ariel has updated its universally acclaimed Atom 3 to create the Atom 3.5. At first glance, only die hard fans would be able to spot the differences, like new projector-beam headlights, LED indicator lights and LED taillights. There’s a new hood, too, but you’d have to see a 3.5 parked beside a 3 to tell the difference.

While normally-aspirated versions continue on with the 245-horsepower, 2.0-liter Honda iVTEC K20Z4 engine, supercharged variants now make 315 horsepower courtesy of intake, fuel system and fuel mapping changes. Instrumentation is revised to include gear indicator and upshift functions, and a data logger can be added as an option. 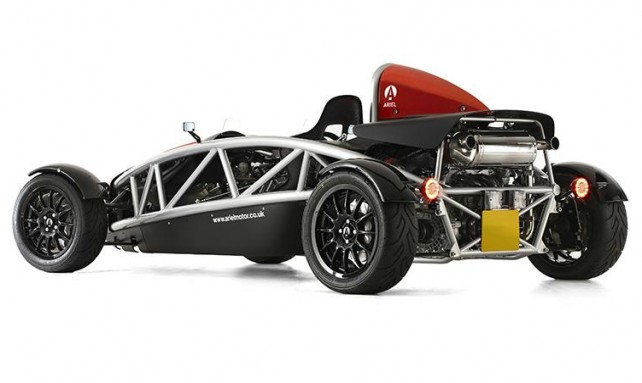 While the Atom 3 really didn’t need to up its handling game, the 3.5 includes the stronger space frame chassis developed for the V8 Atom and also used on the Mugen version. While the stiffer chassis aids in handling, revised dampers now provide better on-road comfort.

It's not clear when the Atom 3.5 will go on sale, or when it will make it to the United States. On this side of the Atlantic, Ariel Atoms are sold by several independent dealers, including Sector 111 and Eddie Hill's Fun Cycles.