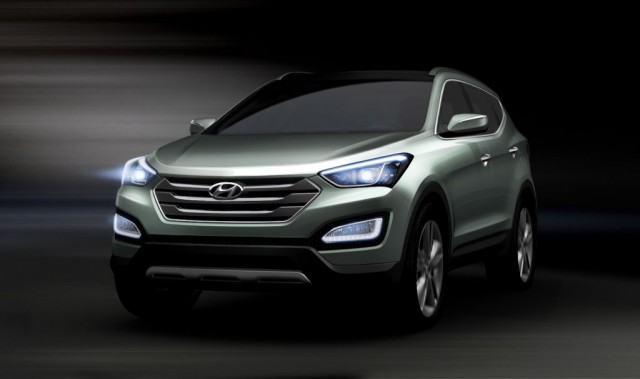 We’ve known for a while that a new, completely redesigned Hyundai Santa Fe (ix45 for European readers) was in the works thanks to the sighting of numerous prototypes and even an inadvertent leak a few months back.

Hyundai has now released two images of its new crossover, while also confirming that it will be unveiled next month at the 2012 New York Auto Show before going on sale later in the year as a 2013 model.

Described as an evolution of the current “Fluidic Design” theme, Storm Edge adds some sharper and more pronounced creases to create a futuristic and urban-style look.

In terms of powertrains, expect the current Santa Fe' four-cylinder and V-6 units to carry over but with several revisions, such as the addition of direct-injection technology to make them more powerful yet more fuel efficient.

Additionally, Hyundai may follow Ford’s lead and install its hot 274-horsepower 2.0-liter turbo engine in the new Santa Fe to give it a better chance against the competition, though we still don't have official confirmation on this. Also unconfirmed is whether Hyundai will choose to bring back its third row seating option on the Santa Fe after dropping it in 2009.