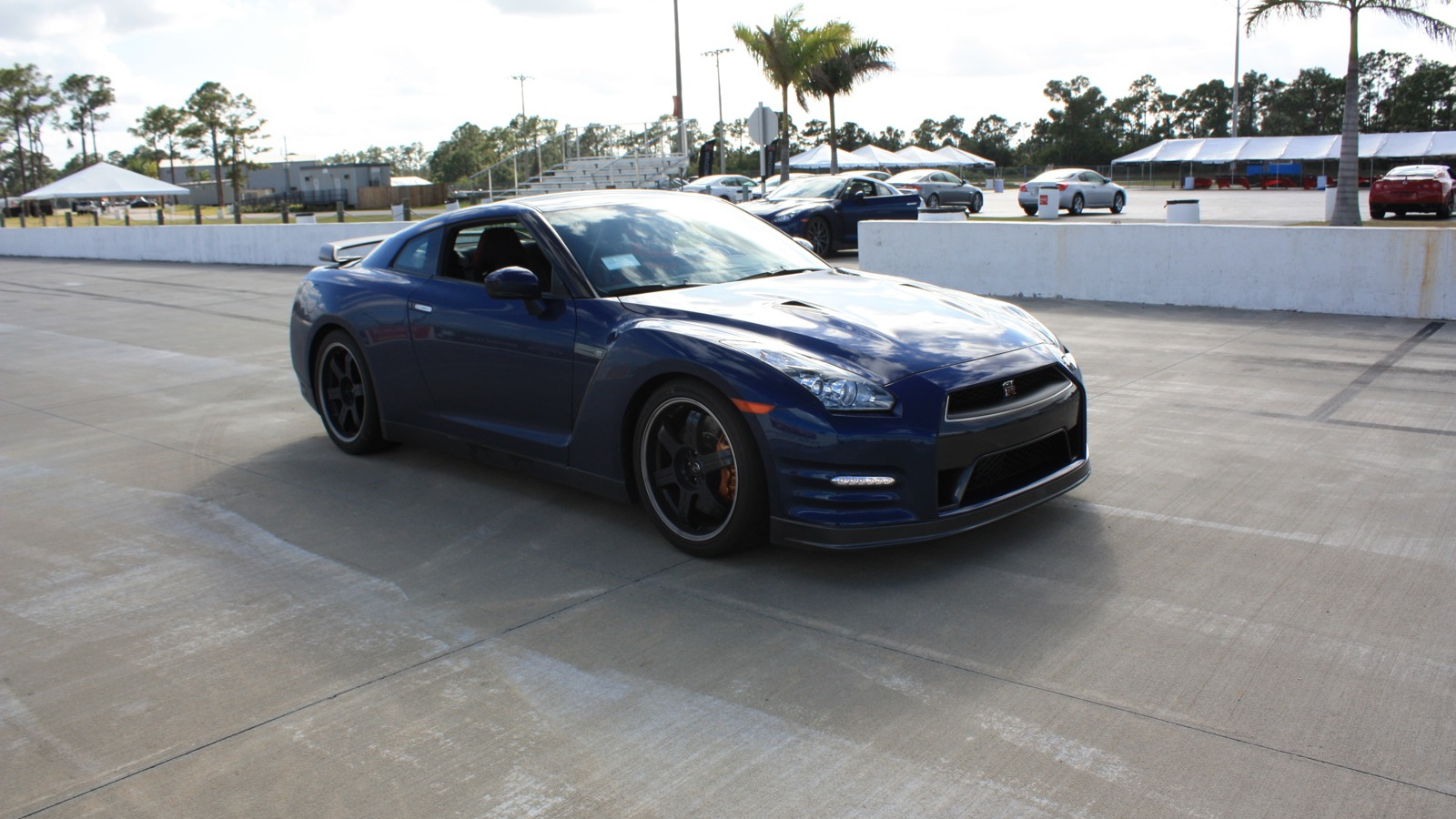 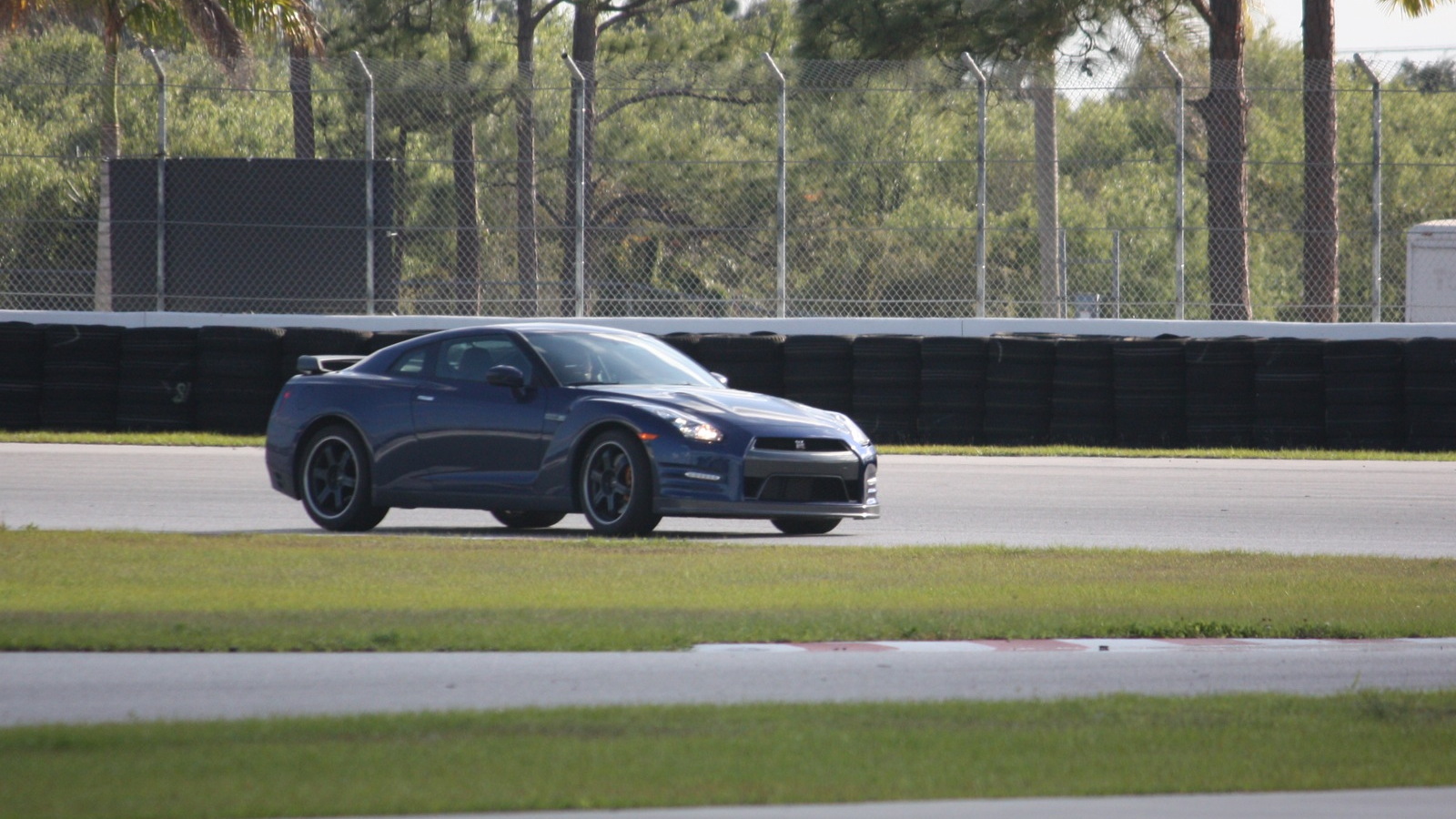 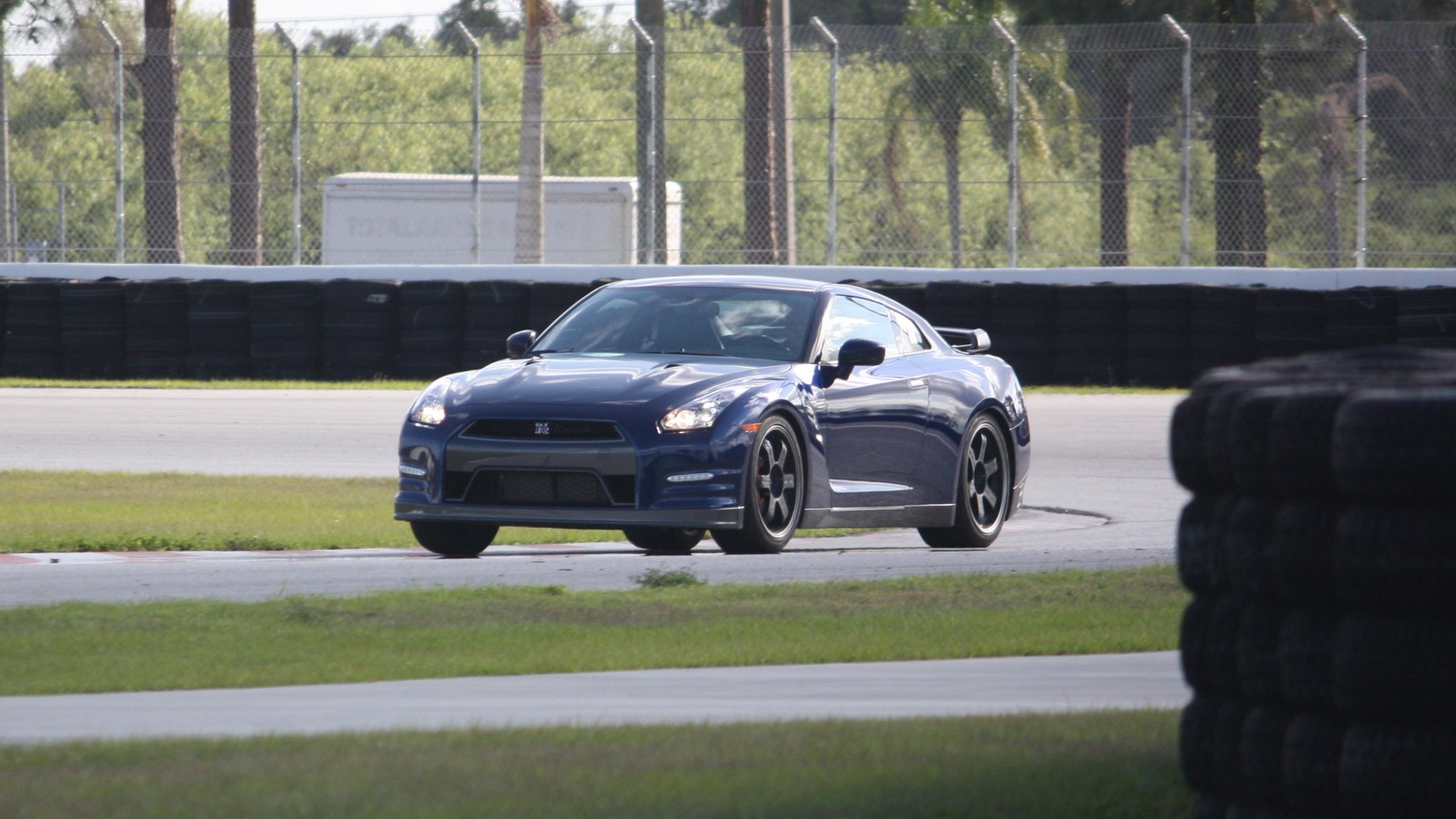 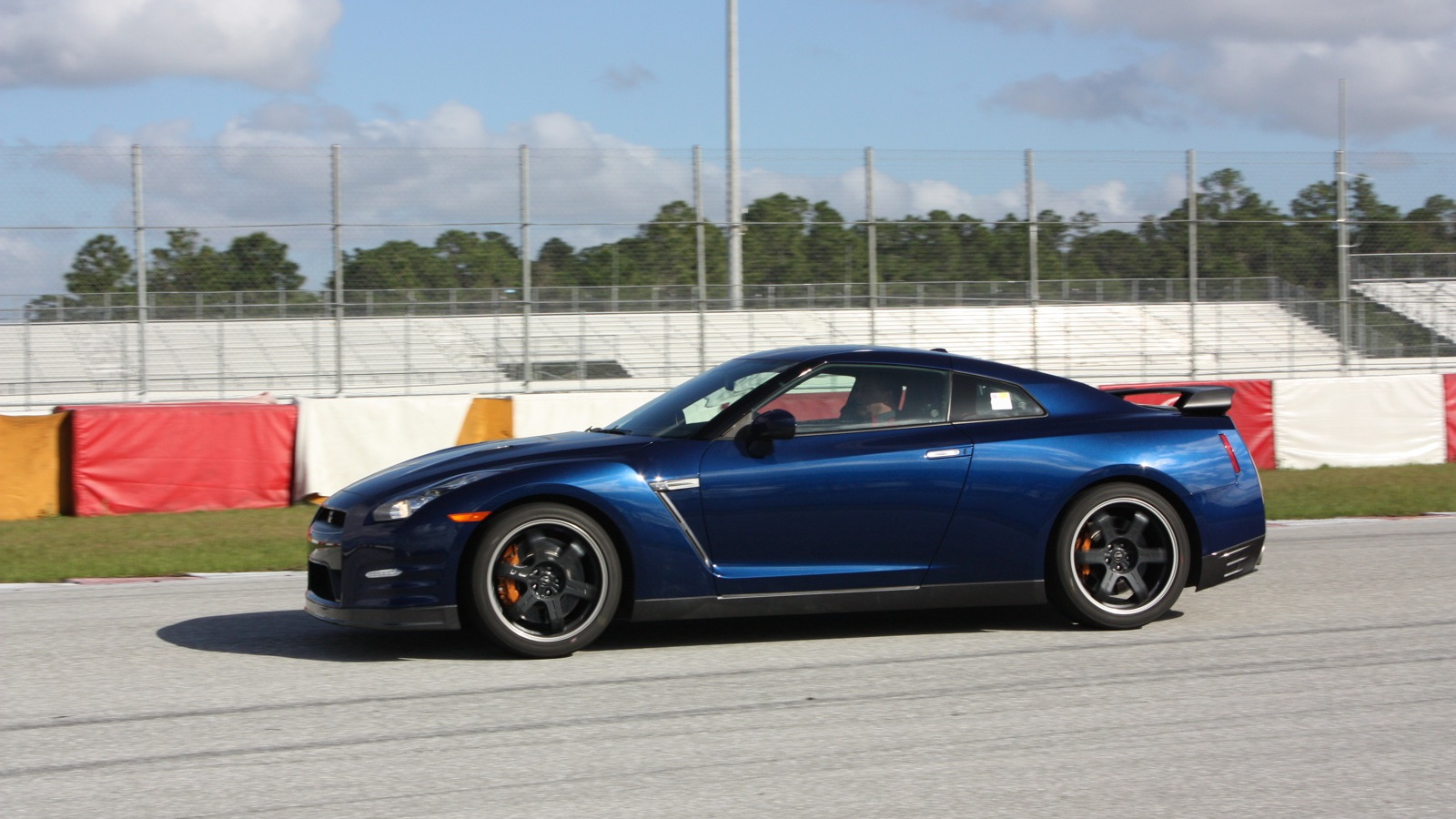 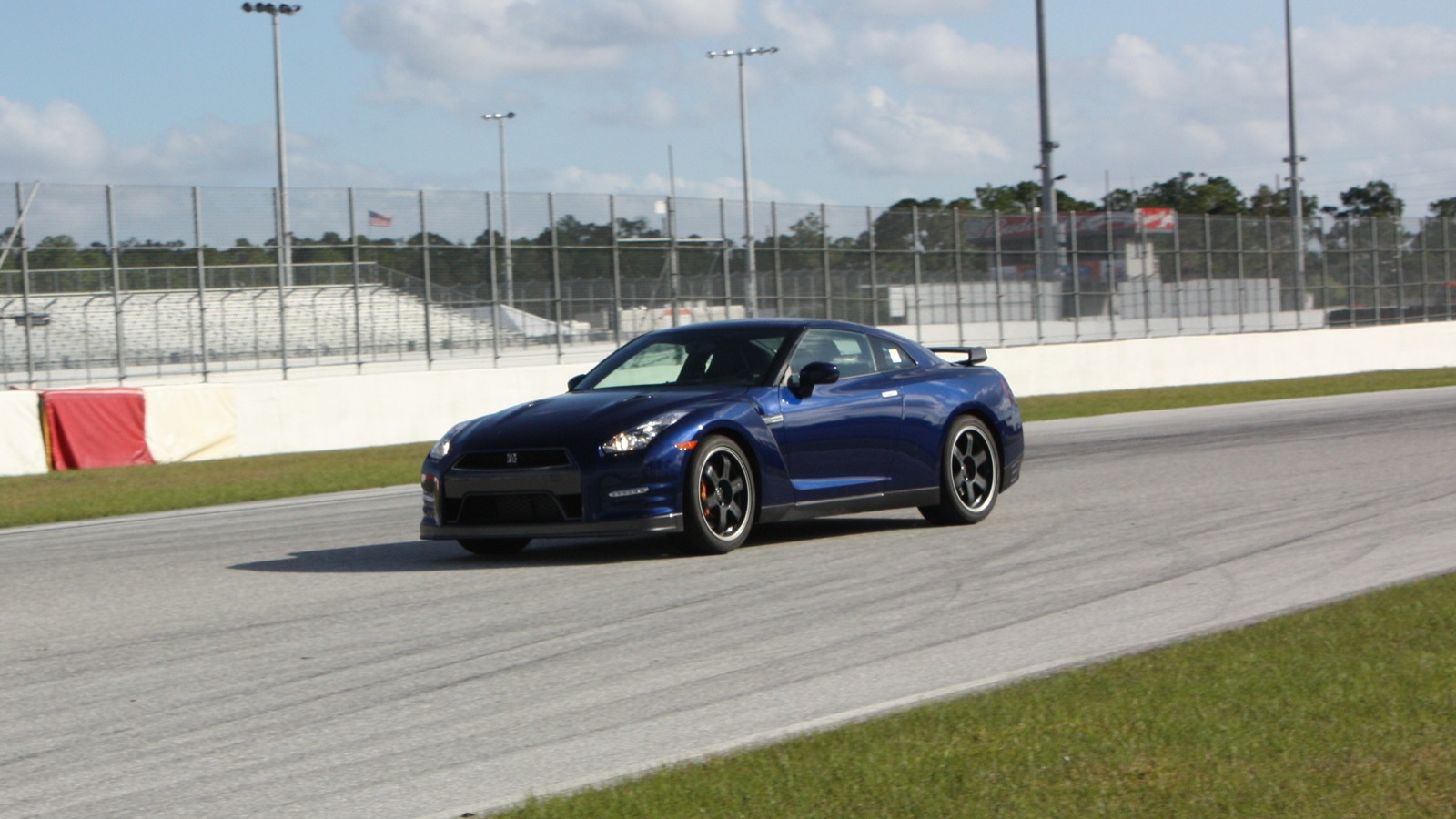 13
photos
Nissan's GT-R sport coupe, launched in Japan in late 2007 and in the U.S. mid-2008, is the continuation of the storied Nissan Skyline GT-R. Throughout its history, the GT-R's blend of stunning performance and reasonable value has earned the car legions of fans worldwide.

If you’ve never had the opportunity to drive a Nissan GT-R, the experience can be somewhat surreal. Thanks to plenty of horsepower and all-wheel-drive grip, acceleration is impressive, even for us jaded-auto-journalist types.

Mat the accelerator pedal, and the GT-R launches like a bullet from a gun. One minute you’re standing still, while the next you’re being hurtled through time and space as if being moved by the hand of God. Or in this case, the hand of Godzilla.

The net result was that an already-impressively-fast car became even faster, while maintaining its bargain-basement pricing (by supercar standards, anyway). Most manufacturers would be content to revise a few interior bits for the next year and call it done, but that’s not the GT-R way.

The staff behind the development of the GT-R operates more like a race team than an automaker, and it’s continually looking for ways to improve the product. For 2013, the GT-R gets even more horsepower and torque, courtesy of ported and polished cylinder heads. Expect 545 horsepower and 463 pound-feet of torque from new models.

Intercooler breathing is improved, too, and transmission shift feel is better than last year. The suspension has been retuned with a slight spring rate increase, and the Bilstein DampTronic shocks now use a “bypass valve” system to increase ride comfort. New model-specific Dunlop tires round out the package.

To highlight the differences between last year’s car and this year’s model, Nissan is currently running a program for journalists, dealers and existing GT-R owners called “The GT-R Experience.”

By allowing us to drive 2012 and 2013 models back-to-back, through exercises meant to showcase the new car’s abilities, Nissan hopes to illustrate what’s been improved on the 2013 model.

First up was an eighth-mile drag race, followed by a 0-60-0 mph run. While 15 horsepower and 15 more pound feet of torque may not sound like much, the difference in acceleration is noticeable. In case you can’t feel it on the “butt-dyno,” the 0-60-0 run, which takes less room in the 2013 car, gives a good benchmark.

Next up was a short handling course, meant to illustrate the difference in suspension from 2012 to 2013. Even with the shocks in the center, “normal” setting, the stiffer springs produced flatter cornering at turn-in. The ride quality was noticeably improved, too, adding to the GT-R’s appeal as a daily driver.

Once Nissan was satisfied that us media types wouldn’t stack $100,000 sports cars, we were sent to an autocross track to work with instructors from the Skip Barber school. Again the difference between the 2012 GT-R and the 2013 GT-R was immediately apparent.

The 2013 model pulled harder down the short straight, and with the suspension in “Comfort” mode actually worked better through the course’s quick left-right-left corners. When you consider that the GT-R has a curb weight of 3,829 pounds, its ability to quickly transition from corner to corner seems to defy physics.

After successfully proving ourselves on the autocross track, we were allowed to lap Palm Beach International Raceway’s road course, once we were shown the racing line by Skip Barber instructors.

Nissan required us to leave the suspension, VDC and transmission settings in the center, “Normal” mode, which was prudent given the car’s capabilities and the mixed driving resumes of the journalists in attendance. It also (wisely) put a slalom course in the middle of the track’s back straight, limiting top speed to around 130 mph.

Again, the 2013 car clearly pulled harder under acceleration and seemed to have noticeably higher limits in the corners. The GT-R has the ability to make any driver feel like a hero, as it gently reins you in before you get seriously bent out of shape.

Detractors will say that the car is “too good,” and that it won’t make you a better driver since it corrects for many of your mistakes behind the wheel. Some decry its lack of a manual transmission, but we think that’s a good thing since replacing the GT-R’s dual-clutch, six-speed automatic with a manual would only slow the car down.

Is it perfect? No, it's not. For the money, the car lacks a bit of refinement, especially compared to European rivals (which, in fairness, cost quite a bit more for similar performance). If you're looking for Audi-like-levels of interior materials, fit and finish, you'll likely be disappointed. Instead of wasting money on making the interior club-room comfortable, Nissan spent its budget on making the car astonishingly fast.

If you're looking for a quiet GT car to soak up long highway miles, the GT-R won't be to your liking, either. It's not excessively noisy inside, it's just not grand-tourer quiet, but that's not the car's primary mission. On the other hand, if you want the best bang for your performance buck, we'd be hard pressed to pick a better choice than the Nissan GT-R.

Love it or hate it, there’s no denying the facts: the GT-R may be the highest-performance vehicle on the planet that’s (relatively) accessible to the common man. For the price of a used Italian exotic, the GT-R offers superior performance with better day-to-day livability, and Nissan is intent on continuously improving the breed.

Still not convinced? Do whatever it takes to get behind the wheel of one, preferably in a track environment, and you’ll be a believer, too.

Standard disclaimer: Nissan gave us the opportunity to drive the GT-R on its dime, including track time, tires, gas and brakes, and presented us with the required safety equipment to do so.