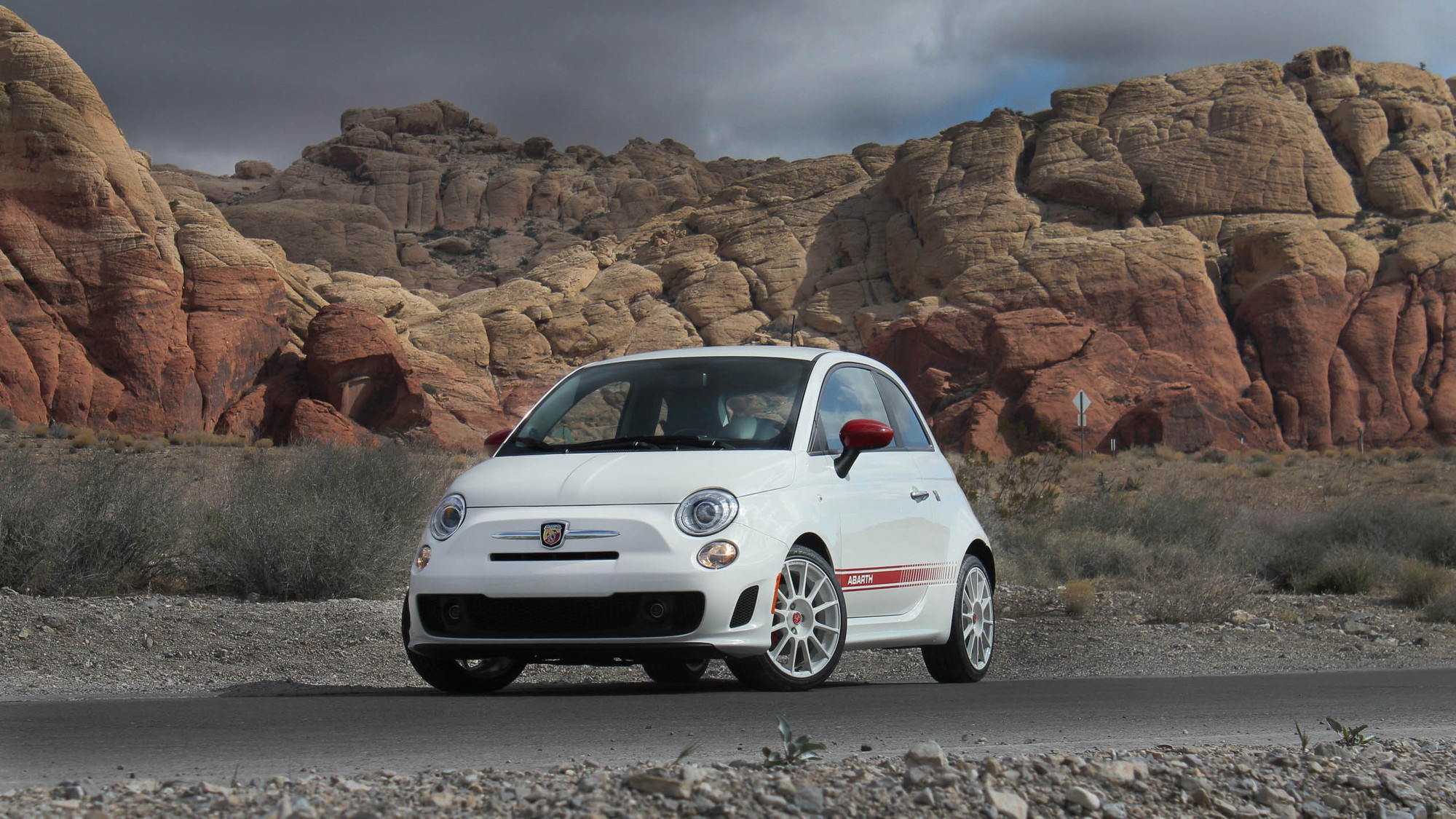 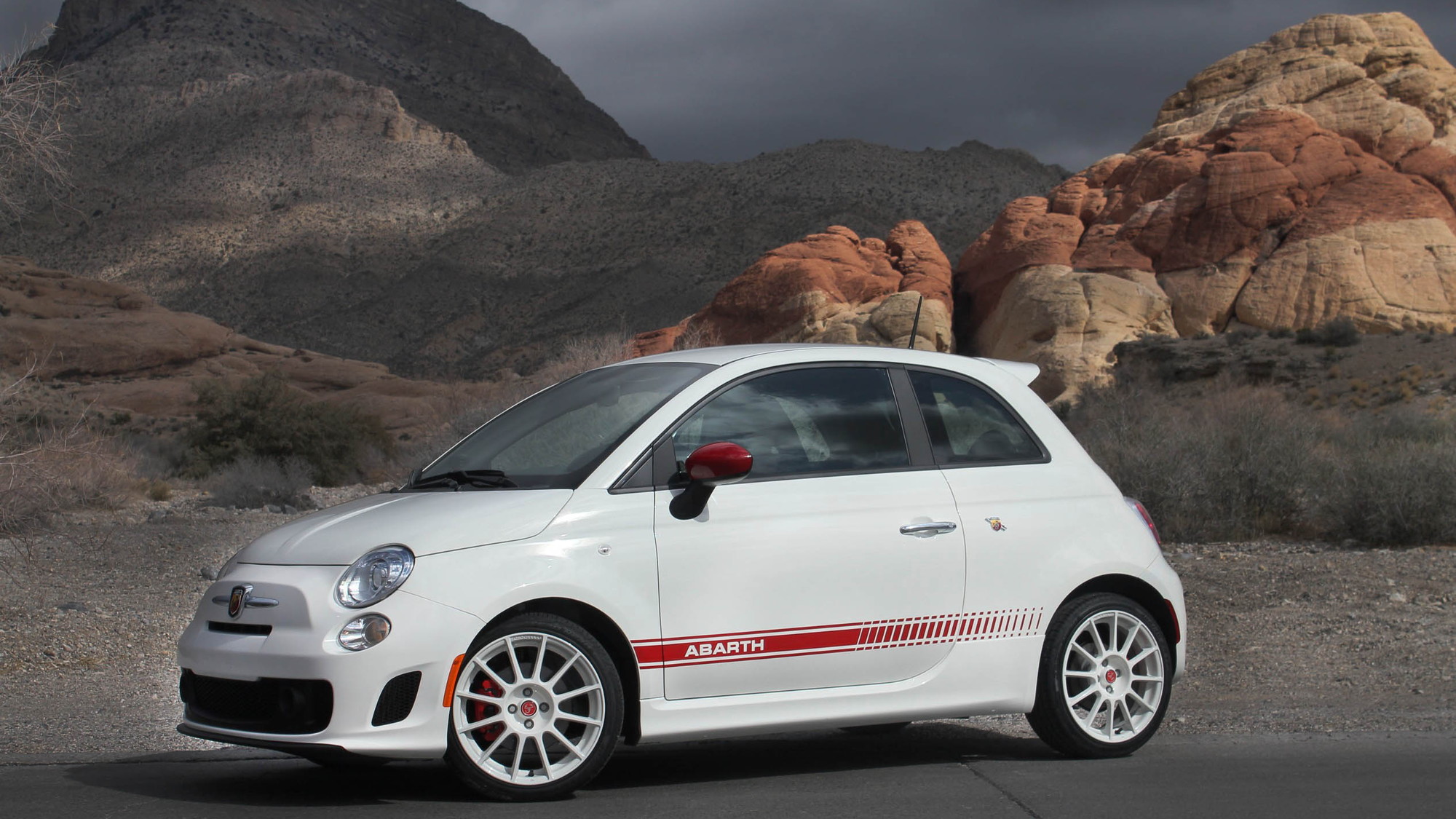 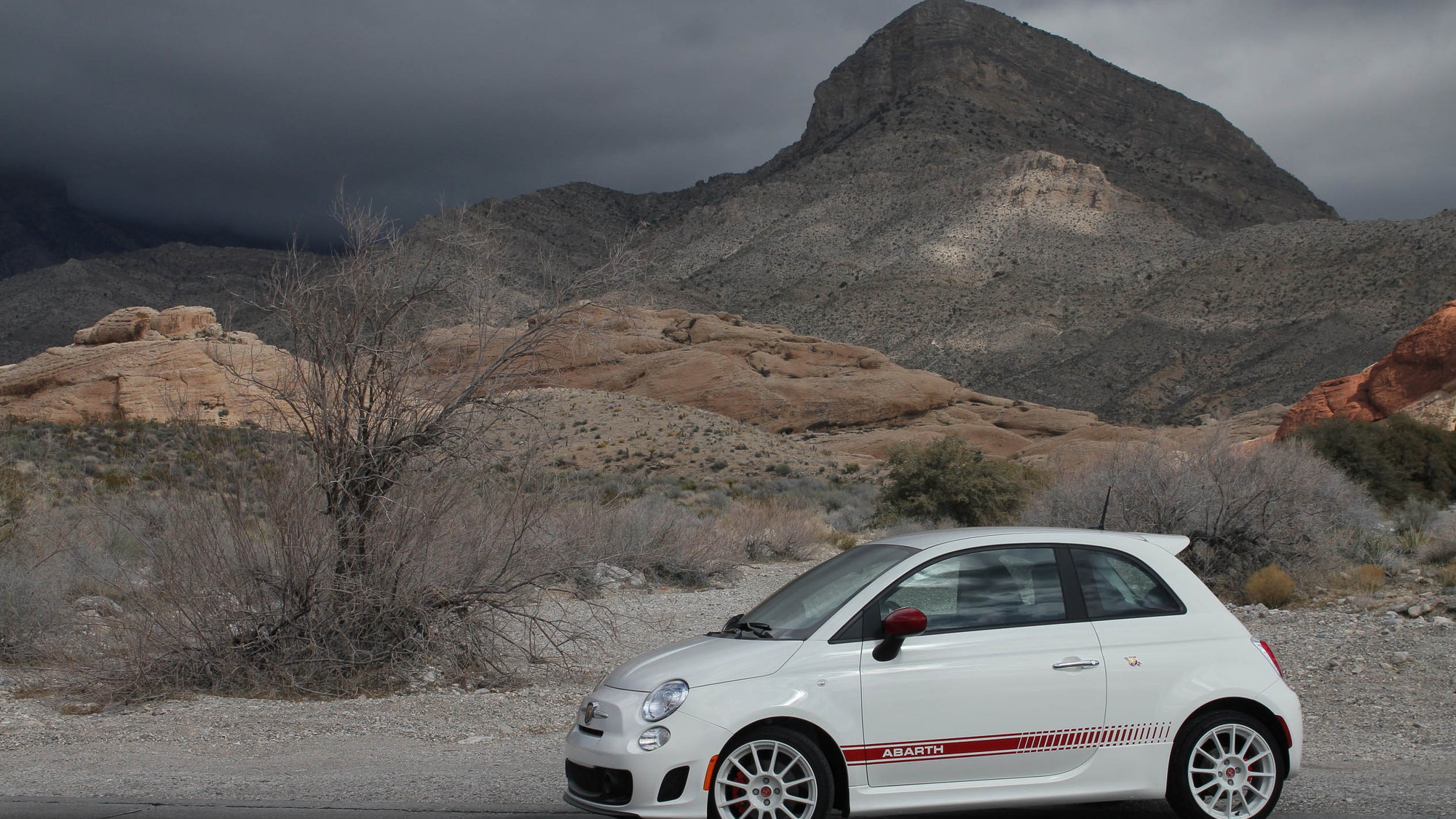 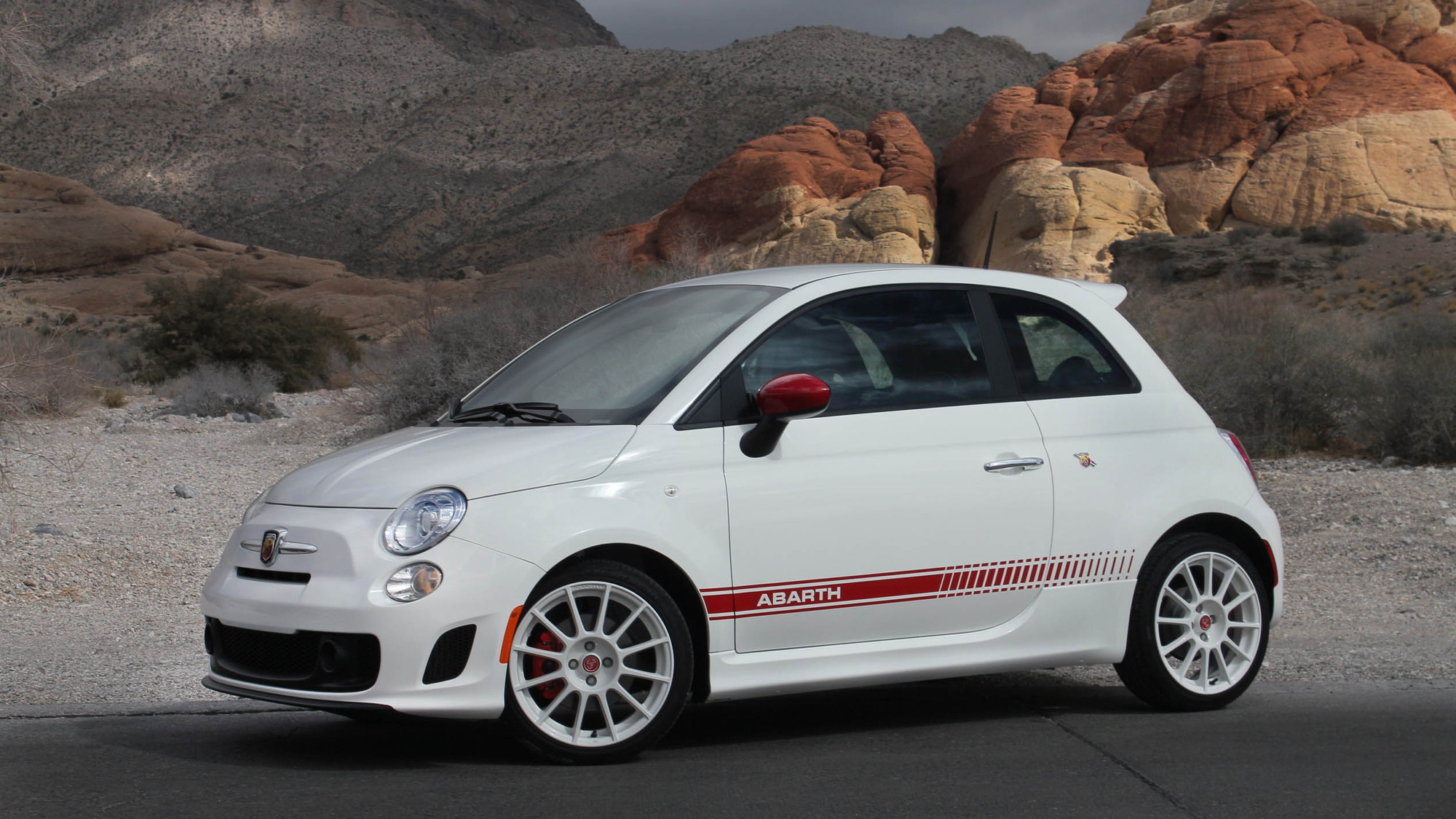 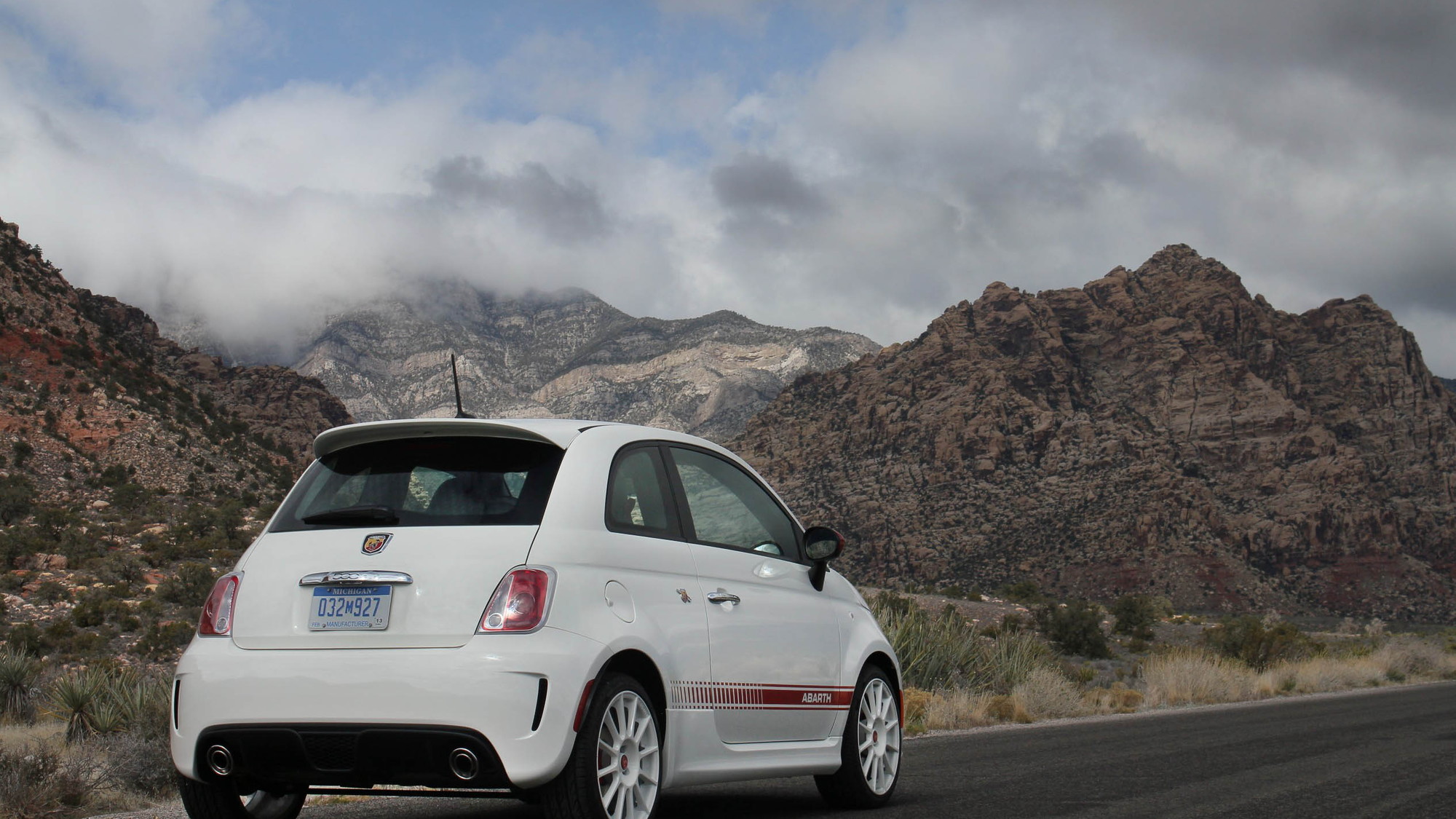 Las Vegas, if you haven't been lately, kind of sucks. Everything is twice as expensive as it should be, good blackjack tables are nearly extinct (even at $100 a hand), and traffic is bad enough to make trekking on foot seem like a good idea even in the summer desert heat. But fortunately, I wasn't in Vegas to gamble or take in the shows. I was there to drive, and for that, Vegas is actually pretty awesome.

But can a scorpion-badged, 160-horsepower, turbocharged 1.4-liter Italian hatchback live up to the promise of Spring Mountain's highly technical, famous-corner-inspired, 3.1-mile long configuration? Surprisingly, yes, it can. But more on that in a bit.

Disclaimer: Fiat--no, Abarth...err, Chrysler flew us out to Vegas, put us up in the Hard Rock Hotel for a couple of nights, and took us to the Playboy Club so we could bring you this review. The Playboy Club isn't nearly as cool as you'd think.

Before we could get to the Spring Mountain Motorsport Ranch, we had to drive there--via the scenic Red Rock Canyon route. That's about two hours of tooling about on public highways, if you count the trip through the canyon park itself.

Situated in the car with another scribe, our day's computer and camera gear easily stowed, I found the car comfortable to sit in, even with the tall passenger seat height--it's not adjustable like the driver's seat is. Neither seat gets as low as you'd like, leaving you feeling like you're driving a very (very) tiny crossover. But the feeling subsides and we're on our way.

At highway speeds, the Abarth 500 is actually very well controlled. The Koni Frequency Selective Dampers (FSD) up front do a nice job of absorbing the bumps, potholes, and other hazards scattered around the average public road, but still feel firm and sporty. Cabin noise is minimal, not just for a small, inexpensive car, but overall--at least until you cross 75 or 80 mph, where wind noise picks up noticeably.

Once we reached the twistier bits, the car's balance and overall grip felt very good, offering as much pace as you'd care to take into an unfamiliar turn with a blind exit and other cars about.

But even on the open road, a few small annoyances arose: The gear shift feels like it's made of rubber, mounted on rubber, and engaging rubber, and its throws are long. There's a weird hitch in its gait going from fourth to fifth. The clutch is light and offers little information about its engagement point to the driver's foot.

Filing these away for further investigation on the track, we reach Spring Mountain with a few hours of merciless flogging in the Abarth's future. After a quick orientation session and ride-along, we're loosed like the rabid dogs we are.

Filing out onto the track one by one, the exhaust note of the little Abarth is the first thing you'll notice. A bit barky and raspy at idle and city speeds on the drive in, it really comes to life toward the top third of the tach, reaching something more like a pint-sized wail. The turbo spools and makes tiny wastegate sounds. It sounds like a hot hatch.

Flicking the stability control to its intermediary not-quite-all-the-way off setting, punching the Sport button to give the car full power and sharpen up the steering, and powering out of pit lane into the first turn--Ego Check, a notorious off-camber, decreasing-radius left-hander--the car seems not just able, but ready to rotate off-throttle and in trail-braking.

Dig out of the corner in third, accelerate hard down the short straight--this little thing feels like it has more juice that its 160 horsepower and 180 pound-feet would indicate--heel-toe down to second, back on the power, over the rumble strips, hard on the gas up to third, then fourth, through the long right-handers and across the dip. Even at speeds approaching 100 mph, the car feels stable, planted, while turning and alternately climbing and falling.

Then it's time to grab the brakes, just for a second, before the fast decreasing-radius right, downshifting to third. Here we have our first nervous moment in the car: under moderate to hard braking from 90-100 mph, the back of the car gets light. Very light. Like running up beside your door and floating light. Keep the wheel straight, a minor flick to correct the sliding tail, back on the gas to settle it down, then trailbraking the rest of the excess momentum into the turn down toward the apex.

A few more quick, tight turns, and you're back out into hard-acceleration territory before another hard right that requires a second-gear downshift, back up to 100, brake hard, catch the tail--a few more quick and tight turns, and you're in the big S-shaped section that leads onto the front straight. Here, in these long, skidpad-like left- and right-handers, the Abarth 500's innate balance, tuned into being by the stiffer front springs and tweaked anti-roll bar settings, becomes obvious. Add throttle to widen your line; let off to tighten it; hold neutral maintenance throttle and carry on as aimed, all while dancing with the tires' lateral limit.

Even after scorching runs, pushing as close to 10/10ths as the desire to not put a wheel off, much less ball up someone else's sheetmetal, will allow, the brakes did little more than give off a nice hot just-been-tracked smell. The pedal never got spongy or long, and stopping power seemed consistent from lap to lap, session to session.

On the road again

After several track sessions thrashing the Abarth around this very technical course, we were left wondering just how we might be able to fit one into our budget, as it'd fit into the garage pretty easily. But then it was time to head back, on the open road, to Vegas.

Here, we were reminded of the car's econo-box origins once again. Sure, it's fun--perhaps the most fun of the current really small hatch set--but it's also a car you'll have to drive day to day, and here's where it might come up just a bit short.

While the Abarth 500 feels like it has some punch on track, on the street, it's a bit anemic until you engage the Sport mode (which enables full power), and get up to a few thousand rpms--which means you'll have to choose between fuel economy and fun, and even then, you won't be winning any stoplight drag races. The exhaust gets a bit blatty, just edging up to annoying, when taking off from a stop.

The high seating position comes back as a minor gripe, too, but one that you'll notice each time you get in the car. The back seats aren't any better; they're basically seat-shaped shelves, with very little room behind even middle-height front-seaters. The cargo area is useful, but not for much more than a week's grocery run for two, or a weekend's bags. But hey, it's a very compact car, so we can forgive it these faults--they aren't unique to the 500.

Even with this return to reality, at the end of my day with the Abarth 500, testing examples ranging in sticker price from $24,000 to nearly $27,000 (base price is $22,000), two key impressions remained: this is one fun little car on track, and it looks amazing.

Yes, this little bubble box looks fantastic. It screams performance from a block away, despite sharing nearly all of its exterior dimensions, angles, and details with the much less sporty-looking standard Fiat 500. How does it pull this off? With a nice set of Abarth badges, very comely multi-spoke 17-inch alloy wheels (definitely don't opt for the 16-inchers), and a bit of vinyl.

The wheels, especially when painted white--almost rally style--are probably the real key, setting off the Abarth red paint fantastically. They even look good with the white paint.

Inside, there's a bit more Chrysler (or is it Dodge?) than we'd like, with some funky and cheapish black plastics on the doors, dash, and controls. The controls themselves look dated and overly simple. There's a large plastic section on the dash available in either white or red, with a polished finish, that doesn't quite do the job of looking like painted metal that it seems to be attempting.

But even so, there's an atmosphere--a style--to the Abarth 500's interior that speaks of sport and fun even in the face of material cheapness. And that, perhaps, is the ultimate essence of the Abarth 500, and a fitting tribute to the tuner that originally gave his name to the brand.

Whatever else it is, the Fiat 500 Abarth is a car that doesn't just want to be driven--it rewards the driver for driving it.