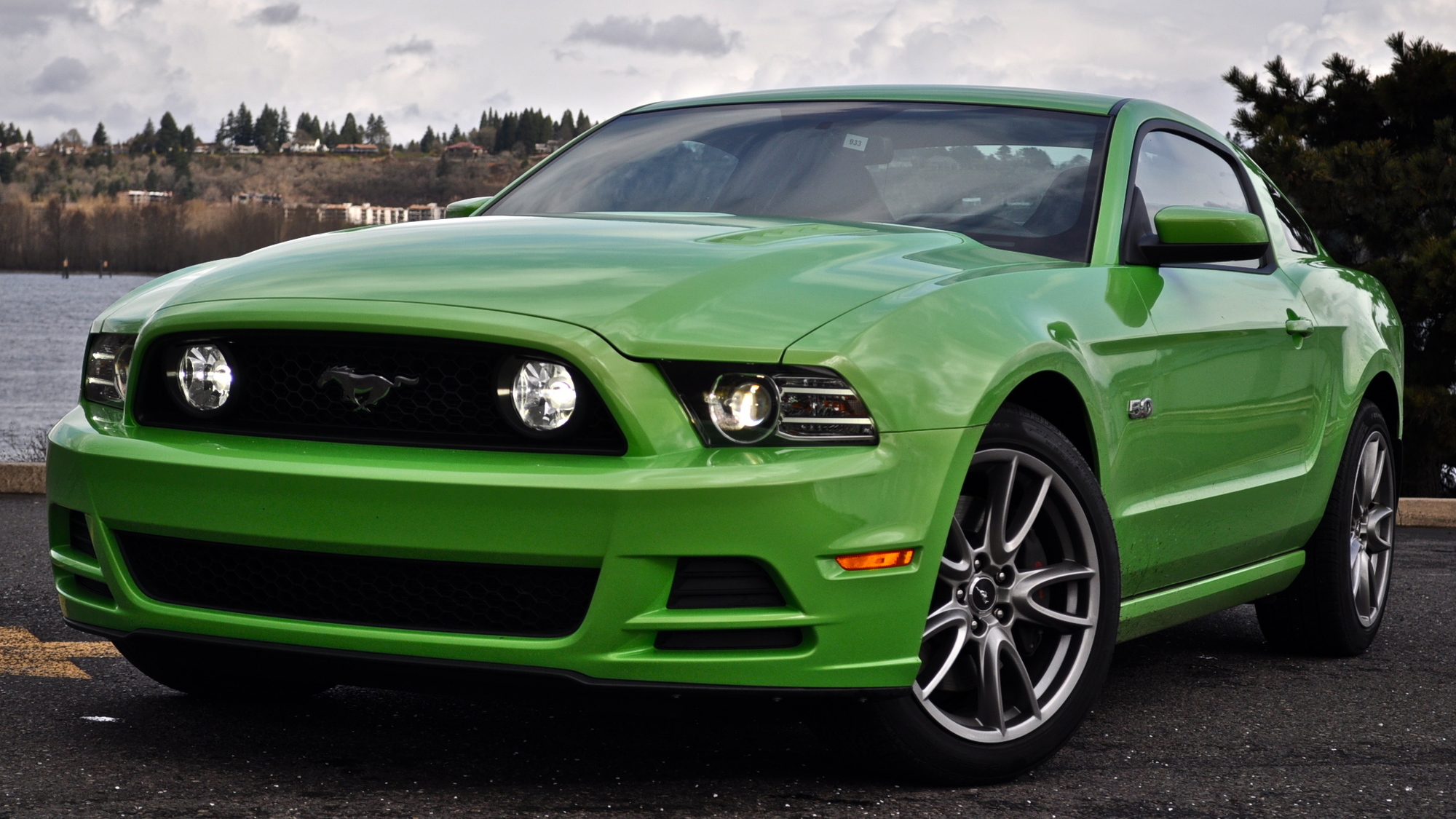 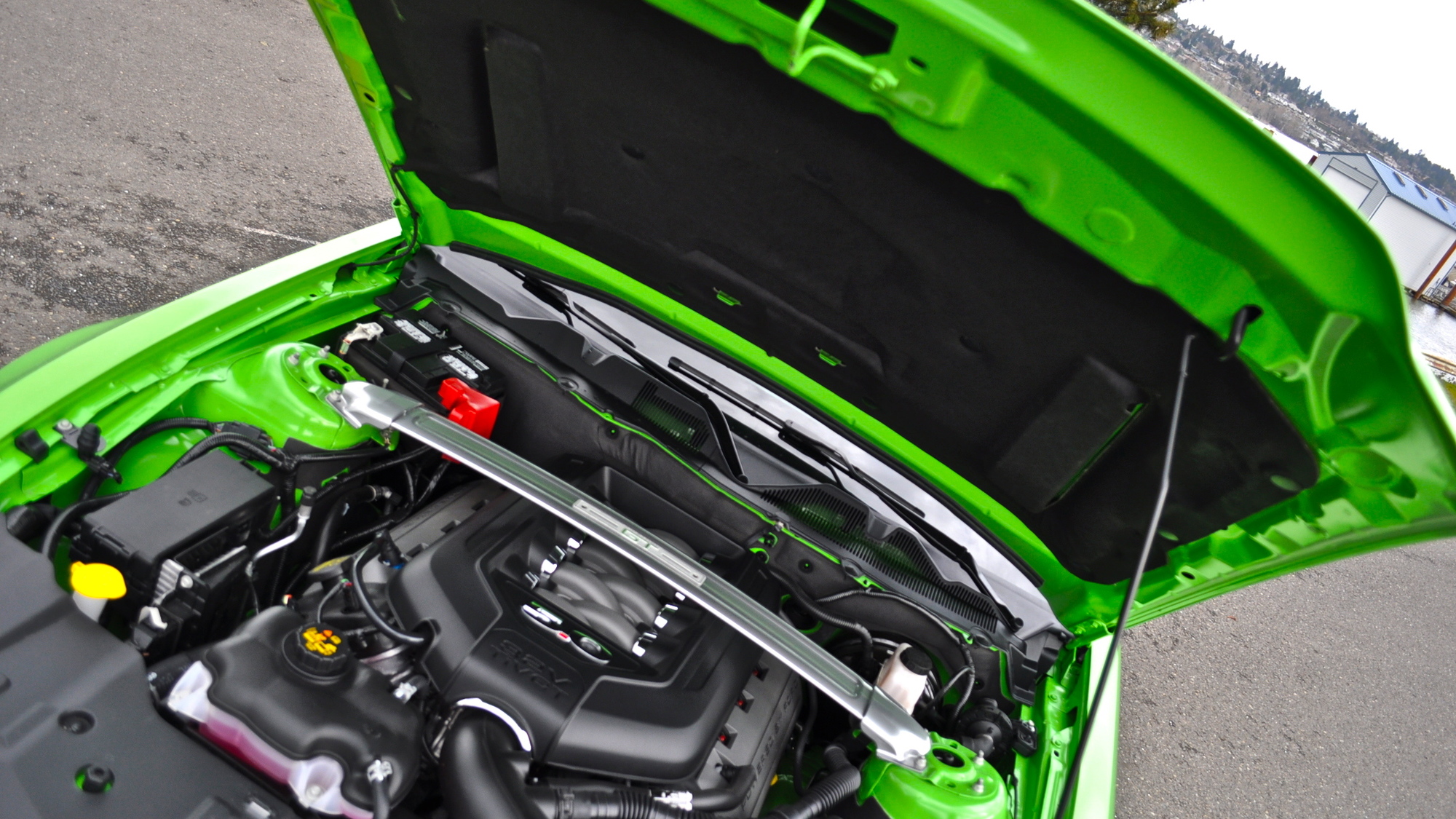 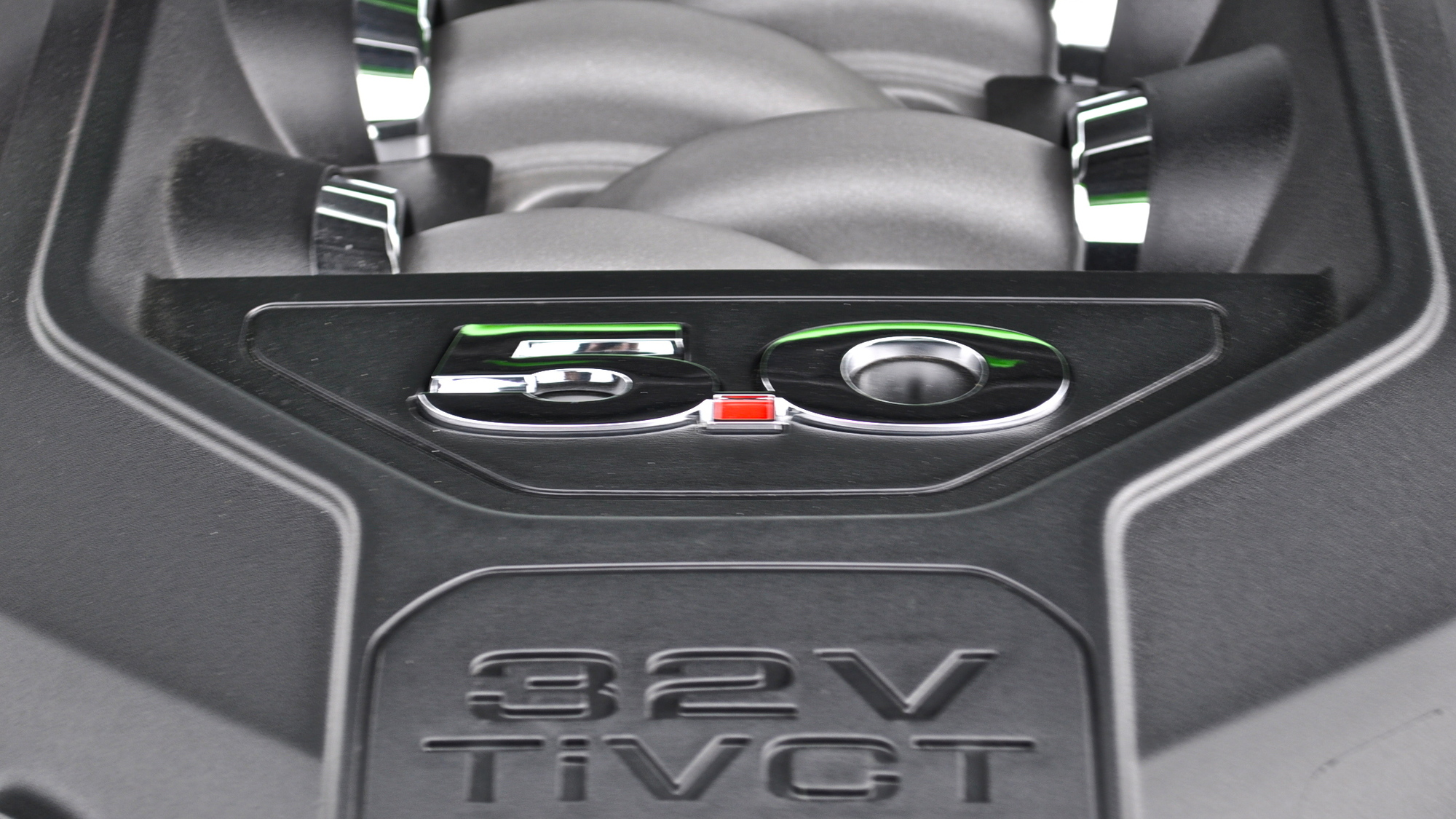 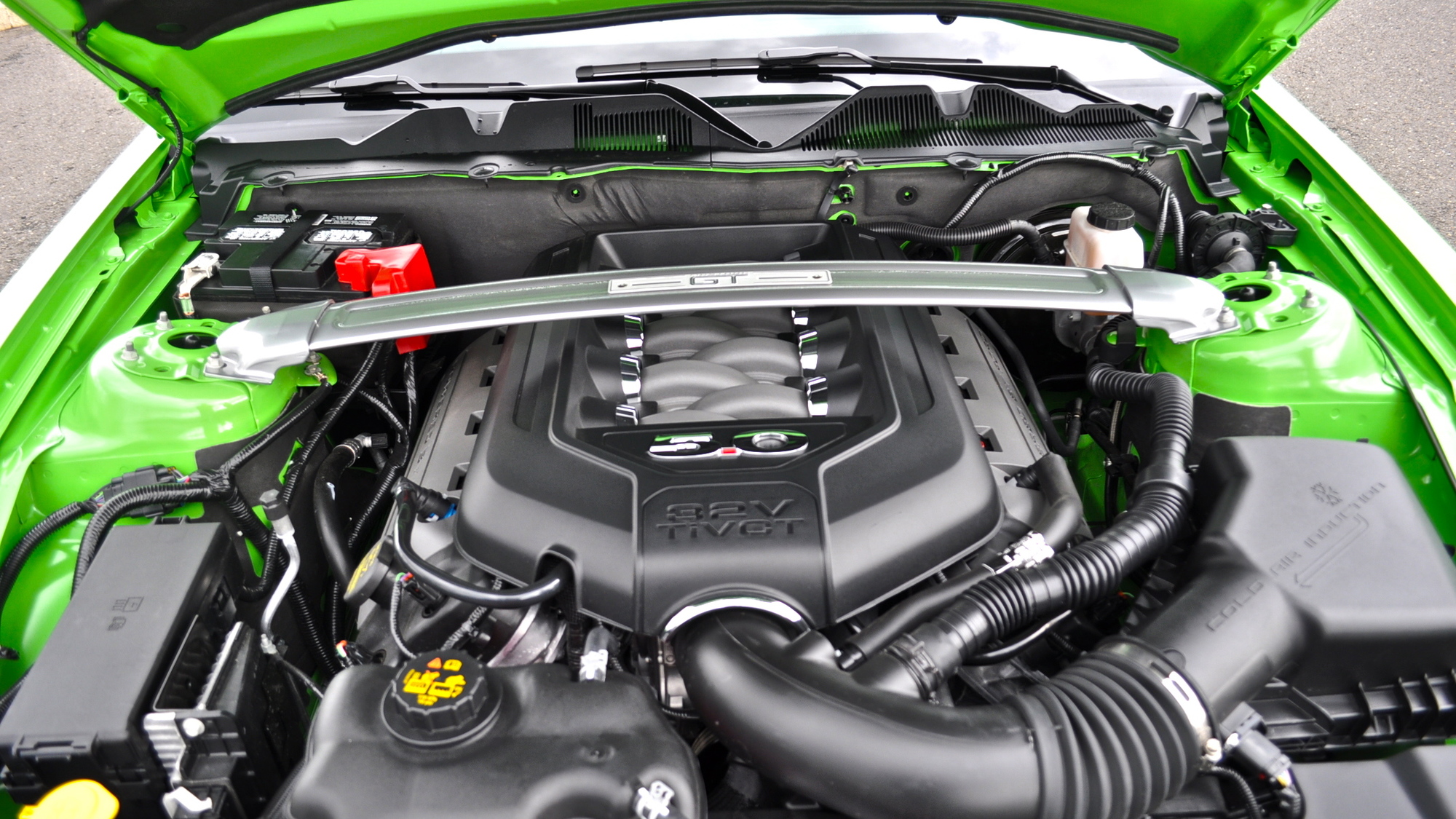 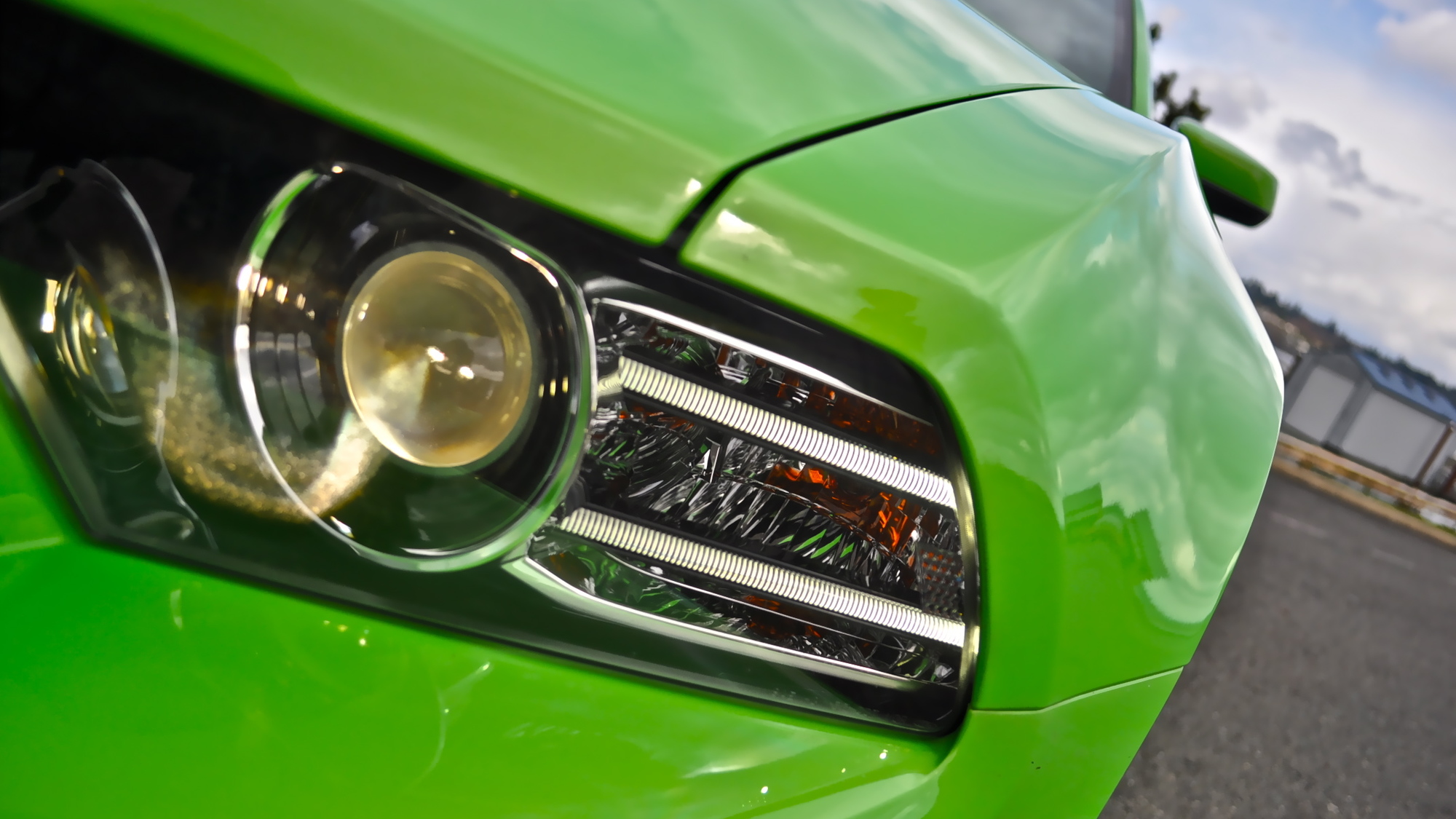 36
photos
The region around Portland, Oregon, offers some truly great backroads for driving enthusiasts; and while they might be perfect for testing out sports cars in the summer and fall months (the dry season), always-gray mid-March perhaps wasn’t the most appropriate place to preview the 2013 Ford Mustang.

We were also surprised when with pouring rain, and temperatures down in the 30s, Ford urged us not to keep to the Interstates and boulevards but to get out and drive a route it had planned on Coast Range roads. But we soon figured out why: Those wet, not-so-ideal conditions, with choppy backroads partially covered with debris and grit, only served to underscore just how surprisingly sophisticated the Mustang is today.

While the underpinnings of the 2013 Ford Mustang have some humble origins and still rely on a solid rear axle, Ford engineers have worked magic in making the Mustang a better driver’s car than quite a few sports coupes or sedans with more sophisticated underpinnings and expensive price tags.

Drives…just as well as last year

For those who are avid readers of this site, followers of the Mustang, or enthusiasts in general, you, there’s really nothing all that new in the ‘driving’ portion of this first drive. In recent years, Ford has stepped up its game with the Mustang and has been introducing a host of serious engineering and feature improvements nearly each model year; while there are plenty of improvements in the 2013 model, performance itself for the V-6 and GT models remains mostly the same as when the Mustang was last extensively improved, for 2011.

There are a few exceptions, but none of them seriously change the feel of the car: The 5.0-liter V-8 in the GT now has 420 horsepower, up from 412 horsepower last year. Also, the automatic transmission now includes full manual control, with a +/- button on the side of the shifter to easily thumb through them, and no forced downshifts or upshifts in manual mode; and manual-gearbox cars get a two-second hill-hold function, for convenient starts when facing uphill. Finally, there are also now three driver-selectable levels of steering effort—Sport, Comfort, and standard.

2013 Mustang V-6 models carry over with Ford’s 3.7-liter V-6, making 305 horsepower and 280 pound-feet of torque. V-8 Mustangs all get that power boost this year, and make 390 pound-feet of torque, but the difference isn’t anything you’re going to be able to feel from behind the wheel—if even see on the stopwatch.

Still a pony car, but with modern, high-revving engines

The Mustang is a pony car, so it’s easy to lapse into thinking that these new versions keep with tradition and have relatively low-revving engines—especially in V-6 form. But it’s quite the opposite. Both engines make their peak horsepower at 6,500 rpm and their peak torque at a rather high 4,250 rpm, so we firmly advise that you get the manual transmission.

We spent the most time with a well-equipped V-6, which especially isn’t very punchy at all below 2,500 rpm but sure is fun if you keep the revs up. The engine seems to really hit its stride approaching 3,500 rpm. So it’s not surprising that the gas mileage we saw over enthusiastic driving in our test loop was lower—a lot lower—than the V-6’s EPA city rating of 19 mpg. If you lug along in sixth and set the cruise you may see the EPA highway of 31 mpg.

Pushing ever faster on some curvy roads, as road surfaces started to dry out, we were again amazed with the tenacity, poise, and progressive, predictable feel of the Mustang—even on rougher surfaces where we expected this pony car’s live rear axle to bite back.

While you can drive the V-6 models hard once the roads are dry, V-8 models are different beasts altogether and call for more restraint; due to the V-8’s sharper throttle response and here-right-now torque, weight transfers tend to be a little less fluid, too, if you’re not careful with it. But with 0-60 times in the mid four-second range, who’s complaining? And actually, V-6 models are nearly as quick, in the low fives.

Easy to get comfortable, dynamically

How does the overall driving experience stack up against that in a Chevy Camaro? While you sit ‘on’ the Camaro—and cramped up against the headliner in a position that this editor can never get comfortable with—you sit ‘in’ the Mustang and that’s key for, in our opinion, feeling comfortable driving the Mustang fast.

From our experience over the past couple of years, in a range of conditions, and with Mustang Coupes and Convertibles, it’s also a very refined car, with remarkably little wind noise. V-6 models you hear most when revved, while the V-8 has an ever-present rumble that turns into a rip-roaring exotic in character as soon as you crack the throttle open. Manual transmission models tend to have a slight bit of added road noise and gear whine, but they’re worth it.

That’s a quick riff on how the Mustang drives; the changes for 2013 for the bulk of the Mustang lineup—represented by the V-6 and GT (V-8) models we drove this past week—amount to a small, but meaningful looks update, as well as a few cool new features.

First off, the front end is different, and better detailed. The grille has been given a new, more forward look, while the lower airdam is a bit thinner and not so gaping, and GT models get functional heat extractors on the hood. GT models are also distinguished by their big, round foglamps in the grille. Headlamps are a smaller, more closely detailed HID design (across the entire lineup), and two strips of LED lighting flank the headlights and are an especially distinctive note. Taillamps get a dark-tinted look, with LEDs surrounding the entire affair; there’s also a blacked-out (instead of body-color) panel between the taillamps. From the side, rocker panels now are body-color. And a clever new night-lighting option, called the pony projection light, beams a pony emblem on the ground next to the doors.

And as for color, there are a couple of new hues—Deep Impact Blue, and Gotta Have It Green—that really show off the facelift and draw a lot of attention in general. Our Mustang had the latter color, which seemed to get more of a fluorescent hue as the sun momentarily came out.

Inside, graphics in the instrument panel are new, and there’s a 4.2-inch ‘productivity screen’ that taps into auxiliary gauges. And enthusiasts should get a kick out of the new Track Apps functions. With it, which you can access through the five-way controller on the steering wheel, you get a set of performance-metric functions, to let you time your own acceleration (0-30, 0-60, and 0-100 mph) and drag-race runs (eighth-mile and quarter-mile), or measure lateral g forces.

Aside from thumbing through the Track Apps screens briefly, we didn’t get a chance to test any of the Track Apps functions; when we get a follow-up drive or track time, we look forward to reporting on how they work.

Recaros available for all

The Mustang’s cabin remains surprisingly comfortable, with a design that nods to the past yet a set of surprisingly modern materials and plenty of soft-touch surfaces on the dash. Only the door panels remain a harder plastic. And we appreciate how the most supportive Recaro seats are no longer the exclusive domain of the Boss 302; those snug perches are now available throughout the lineup, as an option, and upholstered in leather or cloth. On our curvy drive, taking advantage of all the grip the Mustang could give us, we appreciated these seats’ even back support and deceptively robust side support to hold hips in place.

There are a few other new Mustang builds for 2013. For instance, the V-6 Performance Package is offered on automatic models in addition to those with a manual transmission. And finally, those who really do want to take the Mustang out on the track, there’s a new GT Track Package that’s new for 2013, and only offered on manual GT Mustangs. It includes a 3.73 axle, an upgraded radiator, performance brake pads, and the Boss 302’s Torsen differential—in addition to the larger front discs, 19-inch alloy wheels, and summer performance tires that are already a part of the Brembo Brake Package.

So the 2013 Mustang looks fresher and better-detailed, and has a few new and noteworthy features (like user-configurable steering boost), but drives mostly the same as before—and that’s a good thing.

In the meantime, look for those revised 2013 Mustang V-6 and GT models to reach dealerships later this spring.