This Friday auto enthusiasts and racing fans in Los Angeles and New York City will have the opportunity to see the the documentary we have all been waiting for: SENNA. Now that the time is nearly here, we want to know why you are excited to see SENNA.

A quick refresher about what SENNA is about: The 104 minute documentary gives us a deeper look into the personal and professional life of Ayrton Senna da Silva. Sadly, his ten-year reign in Formula One ended on the bloody race weekend of May 1, 1994, in San Marino, Italy. The film eschews many standard documentary techniques in favor of a more cinematic approach by using amazing footage from F1 archives and other unseen video. 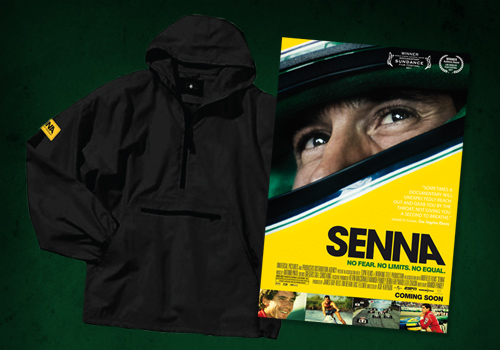 With the limited debut of the documentary this Friday, we have teamed up with the documentary team and are going to give away three prize packs, each consisting of an exclusive SENNA windbreaker and a theatrical poster signed by the filmmaker. Between now and Friday, tweet us (as many times as you would like, the more you tweet, the greater your chances of winning) @TheRealMA and @SENNAmovie as to why you are excited to see SENNA. We will randomly choose three responses on Friday and each will win a prize pack.

We've embedded the official trailer and listed the U.S. cities, dates and theaters were SENNA will be playing.