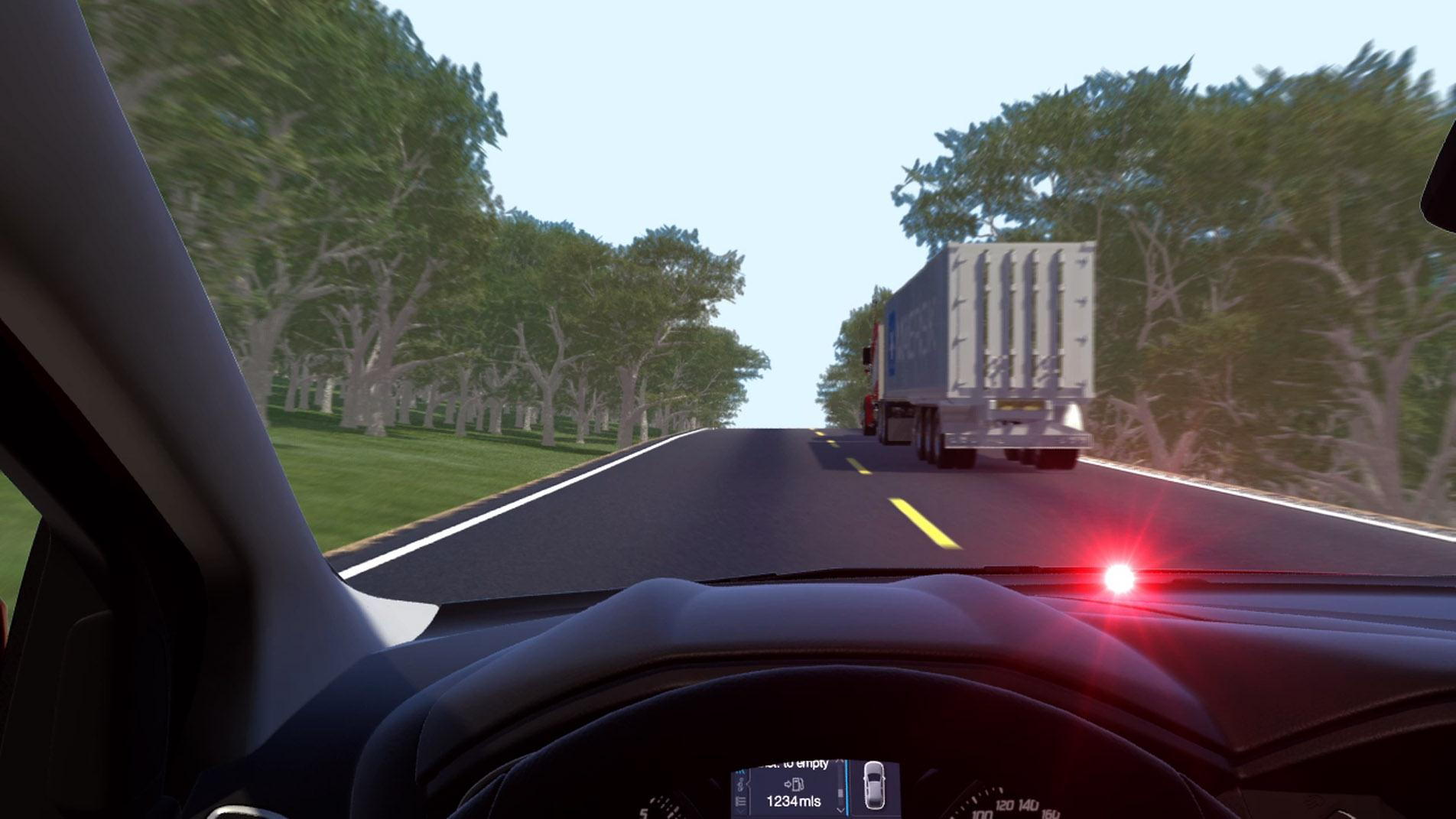 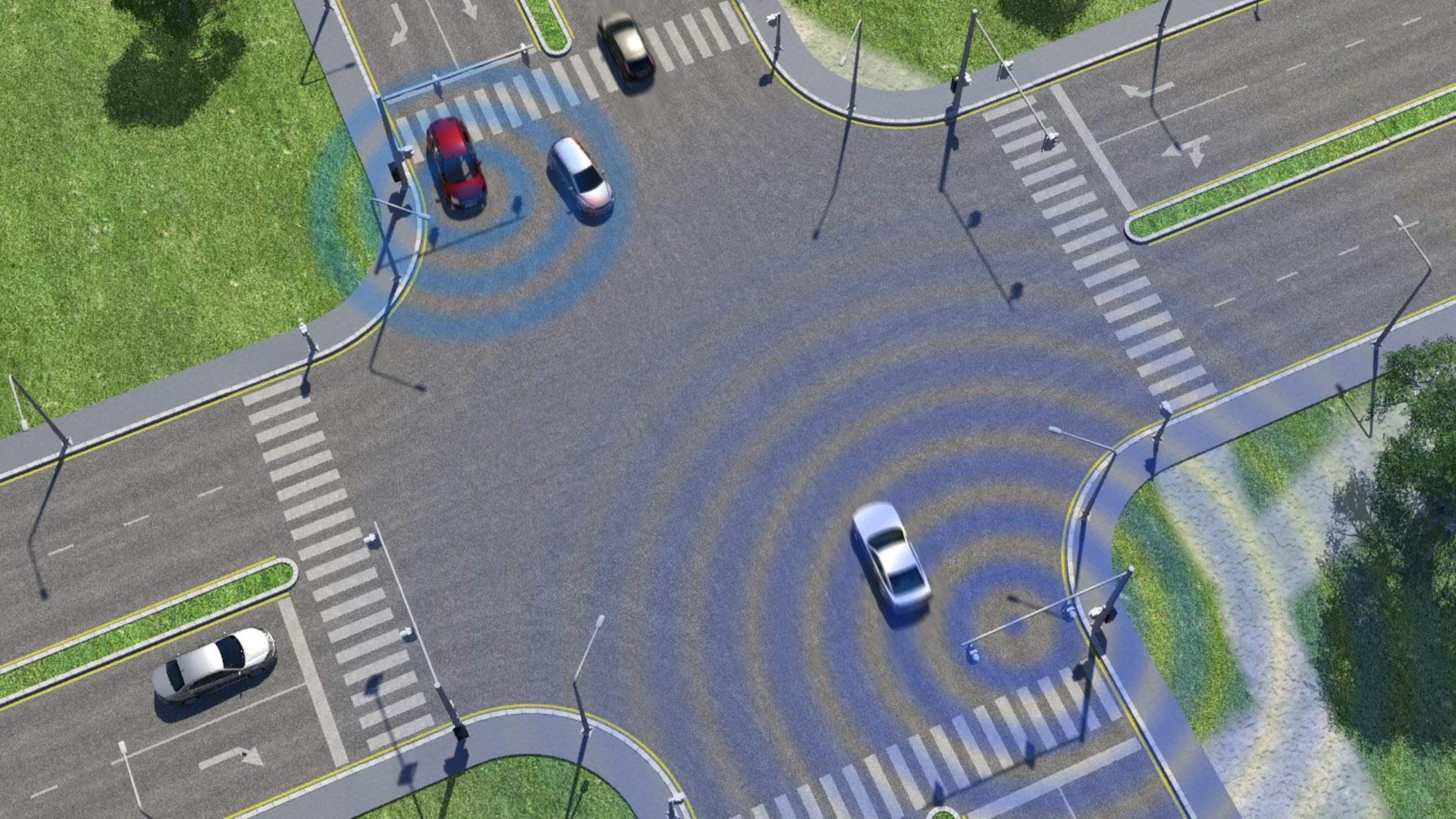 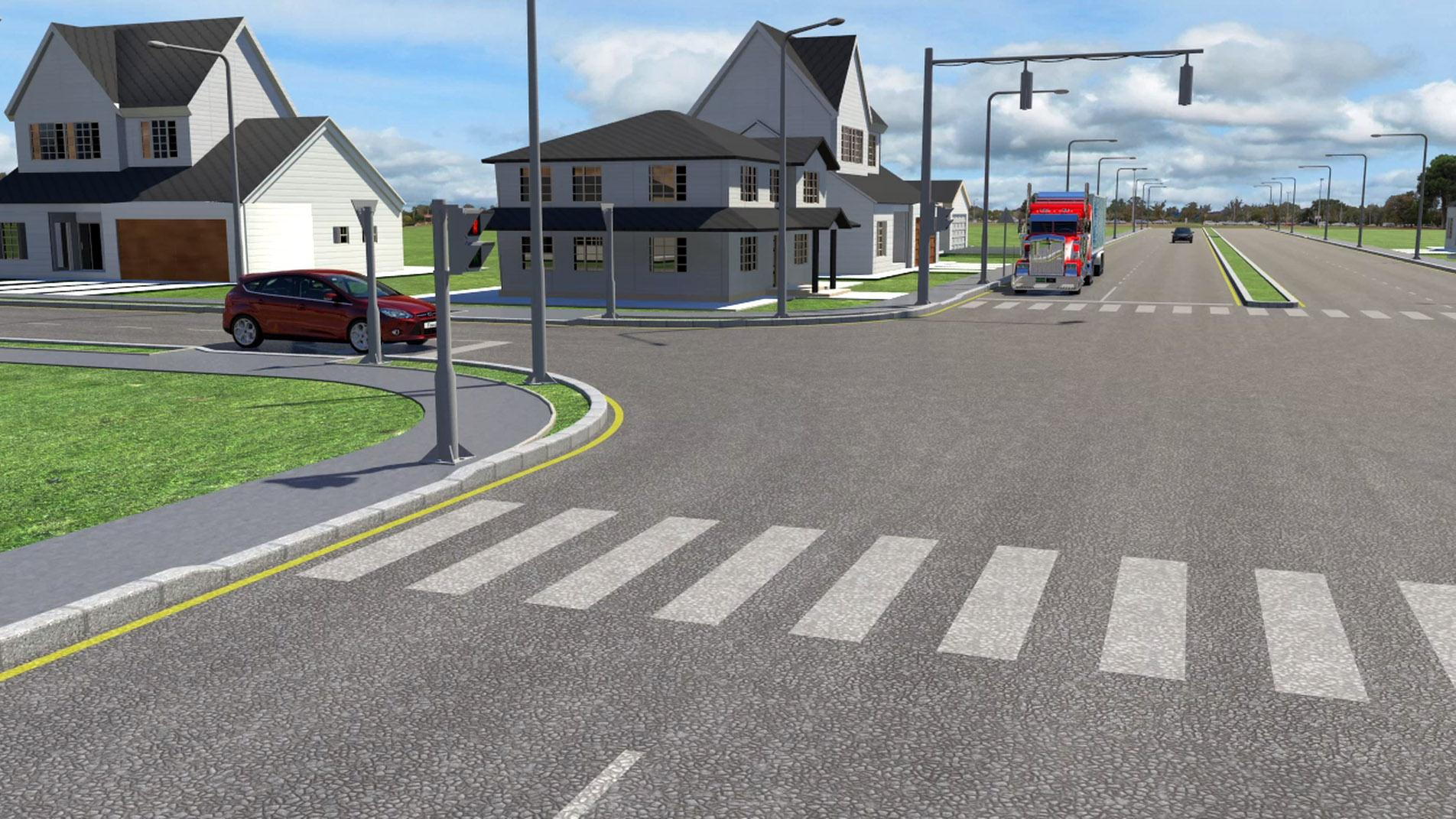 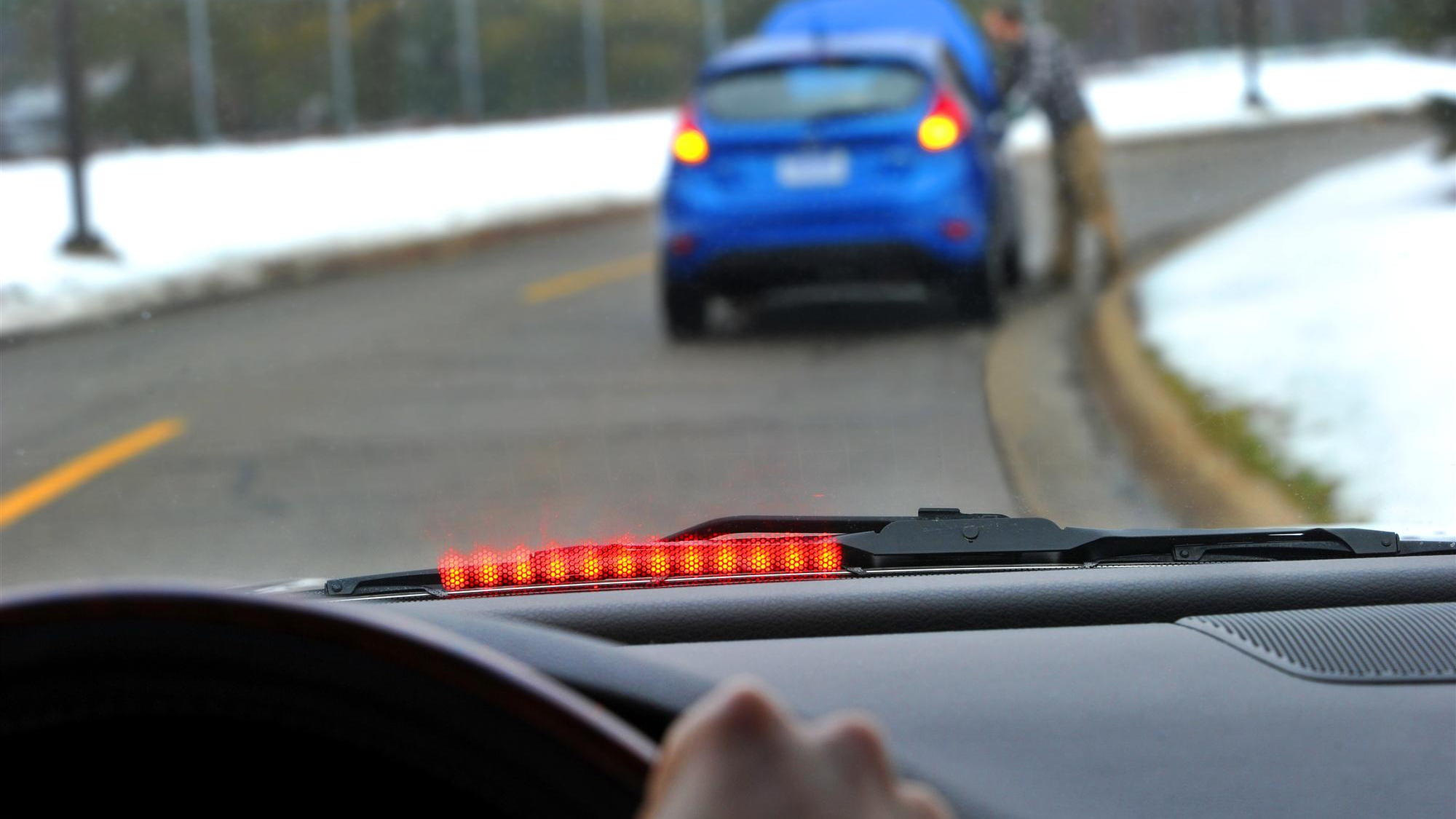 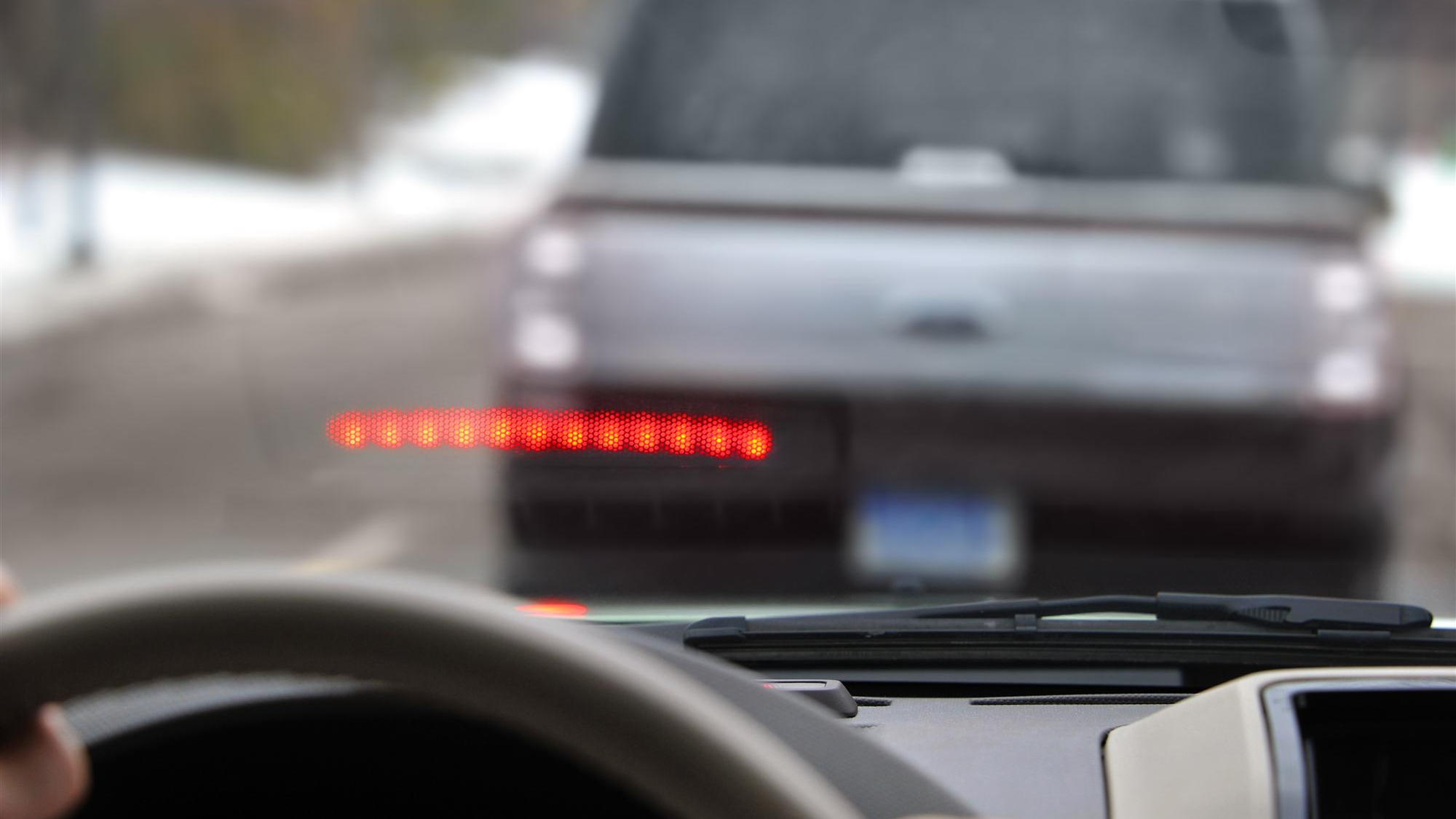 While EVs and plug-in hybrids may be drawing most of the headlines these days, there's another tech development on the horizon that could bring bigger changes for drivers -- and the planet. Vehicle-to-vehicle (V2V) technology is a promising, affordable solution to many of today's transportation problems, and Ford is taking some V2V-ready vehicles on the road to show just what they can do.

V2V systems use a network of radar and sensors to "check in" with other vehicles and infrastructure elements (like traffic lights). The goal is to detect potential collisions, congestion hotspots, and other hazards. If fast-moving vehicles edge too close to one another, an alarm notifies the drivers; if too many vehicles are stacked up at an intersection, the V2V system can encourage commuters to pick a less-crowded route.

What's interesting about V2V is that, at heart, it's simply an extension of existing technology. For example, today's car shoppers can find a range of models with collision avoidance systems that put on the brakes when an accident is imminent -- even if the driver doesn't notice. V2V takes that idea a step further and allows vehicles to "talk" to one another. In doing so, safety improves exponentially: with V2V, it's not just one car against the world, but a group of cars working together to move drivers and passengers around.

The other important thing about V2V tech is that it's affordable, and variations of it can theoretically be installed on nearly any car. Long before everyone finds themselves driving EVs home to their robot butlers, many of us could benefit from V2V devices -- either installed on new models or as aftermarket devices.

If all this sounds a bit familiar, it should. The Department of Transportation recently announced plans to test V2V tech in six cities across America. And earlier this year, we told you about Ford's plans to develop V2V-equipped cars of its own. Ford has made progress on that front, and now the company is taking its products on the road, sharing findings with folks from the auto, science, and tech sectors in Los Angeles and San Francisco.

The goal of Ford's grand tour isn't just to show off what it's done, but to convince others of the technology's benefits and to push for standards so that vehicles of all types can talk to one another down the road. In the best of all possible worlds, widespread adoption of V2V technology could help drivers avoid nearly 81% of all light-vehicle crashes and reduce traffic congestion, putting more money in drivers' wallets and less CO2 into the atmosphere.

-- Ford will demonstrate Intelligent vehicles that use Wi-Fi and GPS to wirelessly talk to each other to help reduce crashes and the ever-increasing time drivers spend in cars
Intelligent vehicles could potentially help in preventing 81 percent of all police-reported light-vehicle crashes involving unimpaired drivers, according to a National Highway Traffic Safety Administration (NHTSA) Report

-- Traffic congestion continues to worsen in American cities, annually wasting nearly 3.9 billion gallons of fuel and costing the average Los Angeles commuter an additional $1,464 a year, according to the Texas Transportation Institute’s (TTI) 2010 Urban Mobility Report; that figure is likely higher today due to higher costs of fuel

LOS ANGELES, Calif., May 25, 2011 – As Ford’s fuel-efficient vehicles gain momentum in California, company researchers are showcasing what could be next – intelligent vehicles that wirelessly talk to each other to reduce crashes and the billions of gallons of gas wasted in congestion each year.

Today, Ford convened a panel of auto industry, transportation and technology visionaries at Dodger Stadium to experience the technology and discuss how intelligent vehicles could soon lead to breakthroughs in a more sustainable transportation system. On June 1, Ford will conduct a similar event in San Francisco.

“Intelligent vehicles are the next frontier of collision avoidance innovations that could revolutionize the driving experience and hold the potential of helping reduce many crashes,” said Sue Cischke, group vice president, Sustainability, Environment and Safety Engineering.

An October, 2010 NHTSA report on the potential safety benefits of vehicle-to-vehicle communications estimates that intelligent vehicles could help in as many as 4.3 million police-reported, light-vehicle crashes annually, or approximately 81 percent of all light-vehicle crashes involving unimpaired drivers. Experts say intelligent vehicles could be on the road in the near future.

Ford is the first automaker to build functional prototype vehicles to preview the technology, and is conducting a series of events across the country to explore the real-life benefits and near-term feasibility to save drivers’ lives, fuel and time spent on the road. In addition to Los Angeles, Ford’s demonstration tour has stopped in Washington, DC and New York, NY and will visit San Francisco on June 1.

The May 25 panel in Los Angeles is moderated by John Gartner, Senior Analyst at Pike Research. Panelists include:

How it works
Ford’s vehicle communications research technology allows vehicles to talk wirelessly with one another using advanced Wi-Fi signals, or dedicated short-range communications, on a secured channel allocated by the Federal Communications Commission. Unlike radar-based safety features, which identify hazards within a direct line of sight, the Wi-Fi-based radio system allows full-range, 360-degree detection of potentially dangerous situations, such as when a driver’s vision is obstructed.

For example, drivers could be alerted if their vehicle is on path to collide with another vehicle at an intersection, when a vehicle ahead stops or slows suddenly or when a traffic pattern changes on a busy highway. The systems also could warn drivers if there is a risk of collision when changing lanes, approaching a stationary or parked vehicle, or if another driver loses control.

The possibility of reduced congestion
By reducing crashes, intelligent vehicles could ease traffic delays, which would save drivers both time and fuel costs. Congestion also could be avoided through a network of intelligent vehicles and infrastructure that would process real-time traffic and road information and allow drivers to choose less congested routes.

“We are not far from the day when vehicles will operate like mobile devices with four wheels, constantly exchanging information and communicating with our environment to do things like shorten commute times, improve fuel economy and generally help us more easily navigate life on the road,” said Paul Mascarenas, vice president, Ford Research and Innovation and chief technical officer. “A smart network of intelligent vehicles has the potential to benefit drivers in many ways.”

Ford is already delivering top fuel economy performance for drivers with at least 12 vehicles that lead their sales segments in fuel economy – including four vehicles with EPA-certified 40 mpg or higher fuel economy ratings – a claim no other full-line automaker can match. Ford’s comprehensive sustainability plan also includes a full family of electrified vehicles, with five new electrified vehicles planned for North America by 2012 and Europe by 2013. Ford launched the Transit Connect Electric small commercial van in 2010, and in addition to the Focus Electric in late 2011, will introduce C-MAX Hybrid, a second next-generation lithium-ion battery hybrid and the C-MAX Energi plug-in hybrid in 2012.

Ford hits the gas on vehicle communications
After a decade of research, Ford announced earlier this year an accelerated development of its intelligent vehicle work, doubling its research investment and convening a new 20-member task force – consisting of company planners, engineers and scientists from around the world with expertise in safety, eco-mobility, infotainment and driver conveniences. The goal is to define the next 10 years of safety, convenience and driver assistance, and strengthen the company’s position as the global industry leader in connected vehicle technology.

“While there are challenges ahead, the foundation of these smarter vehicles is advanced versions of technologies that are pervasive – Wi-Fi and crash avoidance systems that Ford has pioneered in mainstream vehicles today,” said Mascarenas. “Intelligent vehicles could help warn drivers of numerous potential dangers such as a car running a red light but blocked from the view of a driver properly entering the intersection.”

Speaking the same language
Ford is partnering with other automakers and the federal government, as well as local and county road commissions, to create a common language that ensures all vehicles can talk to each other based on a common communication standard.

This public-private partnership will include the world’s first government-sponsored driving clinics beginning in summer 2011, for which the company will contribute two prototype Ford Taurus sedans. The DOT’s Intelligent Transportation Systems (ITS) will head the research, continuing to coordinate with a coalition of automakers organized by the Crash Avoidance Metrics Partnership (CAMP), which is a joint research group headed by Ford and General Motors. The partnership is working to develop inter-operability standards in advance of completing the research phase in 2013.

Vondale has been appointed by Transportation Secretary Ray LaHood to represent automakers on the ITS Advisory Committee. Mike Shulman, technical leader, Ford Research and Innovation, leads the government-industry technical partnership as program manager for CAMP.

Laying the connectivity groundwork
Many of Ford’s current technologies show how intelligent vehicles will be able to help drivers. For example, features that alert drivers to approaching hazards, such as Ford’s collision warning with brake support and Blind Spot Information System (BLIS®) with cross-traffic alert rely on radar sensors to detect vehicles or objects close to the vehicle.

“Ford has pioneered connectivity in modern vehicles with SYNC,” said Shulman. “We believe advanced Wi-Fi for intelligent vehicles could be added to smartphones or GPS systems and simply connect to SYNC like today’s phones.”