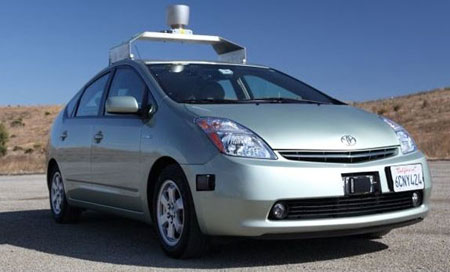 Google has been hitting the headlines pretty hard the past couple of days. Its Android operating system is still hammering the smartphone market, its new music service is causing a commotion, and the company is prepping to settle a hush-hush Justice Department investigation into its advertising practices for half a million bucks. Now we hear through the grapevine (aka the New York Times) that Google is lobbying the Nevada legislature allow its autonomous cars on the state's roads.

The last time we heard from Google's autonomous driving project, the company claimed to have tested the cars on 140,000 miles of California highways -- including one 1,000-mile trip that had no human input at all. The results were impressive: Google had only one accident, and that was the result of someone else rear-ending Google's ride. We can't think of many human drivers who'd fare that well on a 140,000 mile trip.

Google hasn't unveiled details of its plans in Nevada, but the company has hired lobbyist David Goldwater to help pass legislature that would make Nevada's roads open to more testing. If Google is to achieve its goals in Nevada, however, elected officials will have to do two things: (1) create laws that permit driverless cars, and (2) create a loophole in the state's distracted-driving laws to allow folks in the driver's seat of an autonomous vehicle to send text messages.

There's no word on how Google's advocacy efforts are going, but we do know that some lawmakers and regulators have expressed concern about all this newfangled technology. Most transportation laws in Nevada and elsewhere weren't written with an eye toward smartphones, apps, or self-driving cars. It's clear, however, that a new day is dawning in the automotive world, and once the technology passes muster with regulators, legal codes everywhere will soon need major tune-ups. It's simply a question if Nevada will make changes now or later.

Apart from the general mystery surrounding Google's goals for its autonomous car program, we also have to wonder: why Nevada? Sure, there are vast stretches of sparsely traveled roadway that could be useful for testing, but Google could find those in California, too. Furthermore, now that the company has shown that its cars have navigated complex urban environments like the streets of San Francisco, moving to a less-complicated desert highway would seem a backwards step.

Several of us are inclined to believe that Google has its eye on Las Vegas. Vegas is an entertainment capital, a place where anything goes -- a Disneyland for drinkers, gamblers, and anyone else with an ID, fake or otherwise. Vegas also has a very centralized downtown area, with most tourists sticking to "The Strip". Add all that up, and a novelty, driverless cab service that shuttles folks from the Luxor to the Venetian and back again sounds like the adult equivalent of Space Mountain: irresistible.