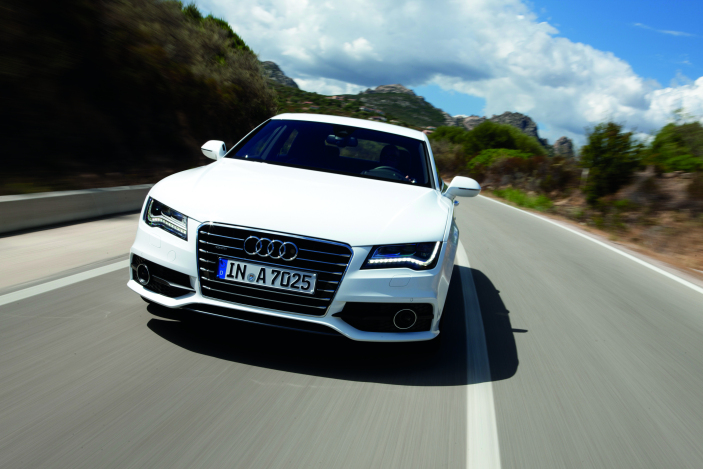 Just two days before the 2011 New York Auto Show opens to the press, Audi has launched an eye-popping marketing campaign for its sleek, sophisticated 2012 A7. Today, the five-door coupe will roll straight into Times Square -- not literally, since cars are forbidden in the pedestrian center of town, but onto a high-tech billboard.

The 15,000-square-foot LED billboard sitting at the intersection of 46th and Broadway is part ad campaign, part love letter to New York. Emblazoned with the slogan, "A boldly designed car deserves a boldly designed world", the billboard features a rotating slideshow of seven "places, objects and destinations within New York City that embody bold design". (Sites likely for inclusion: the High Line, Central Park, the Lipstick Building. Less likely: the crowded aisles of Zabar's.) Audi estimates that more than 1,200,000 pedestrians will see the sign each day of its run, from April 18 through May 1.

This being 2012, the billboard campaign will also include heavy integration with Audi's web and social media channels, including YouTube (YouTube.com/audiusa), Facebook (Facebook.com/audiusa), and a new site, A7BoldDesign.com (which appears to be a Facebook app). Audi invites users to check-in at the billboard using Foursquare or Facebook and to tweet their own examples of "bold design" in the Big Apple using the hashtag #BoldDesign. A regularly updated list of those check-ins and tweets will be posted to the billboard.

Even better: Audi will include expanded information about the seven New York destinations featured on the billboard, as well as those added to A7BoldDesign.com. Using QR codes or a mobile browser, passersby can learn more about those locales and find others in the immediate area. We've come a long way from BMW's less-interesting, semi-interactive outdoor ads in Singapore last year.

Stay tuned for more news about new models and marketing campaigns from the floor of the 2011 New York Auto Show later this week.

• Campaign for the all-new A7 5-door coupe is centered around the tagline: "A boldly designed car deserves a boldly designed world"
• Interactive ad features seven “boldly designed” New York City locations; viewers can visit mobile site to download guide maps to all seven destinations
• Tweets to #BoldDesign and foursquare check-ins will appear on the billboard

Audi will launch the all-new A7 5-door coupe with an interactive billboard in New York City’s Times Square. Located at 46th Street and Broadway, the 15,000-square foot LED billboard will bring to life the Audi A7 tagline "A boldly designed car deserves a boldly designed world" by featuring places, objects and destinations within New York City that embody bold design. From April 18 through May 1, the ad will run 20 one-minute spots every hour.

"The all-new Audi A7 takes cues from high art, with dramatic stylings and bold features. A symbol of Audi’s craftsmanship, the sedan will join the ranks of icons in design and technology. To celebrate the A7’s bold statement, the interactive Times Square billboard will feature New York City locations that represent superior design and artistry," said Scott Keogh, Audi of America Chief Marketing Officer.

Seven locations will be featured throughout the lifespan of the campaign. Using a bold social media platform that includes the Times Square board, a QR code, text messages and a URL, the campaign will drive viewers to Audi’s online and mobile properties for more details about the locations and an interactive New York City guidebook. Locations featured on the billboard will be featured on the mobile site a7bolddesign.com, YouTube.com/audiusa and Facebook.com/audiusa.

New York City pedestrians are invited to Tweet their thoughts and favorite bold places to the billboard using the hashtag #BoldDesign. Audi fans and followers worldwide will be asked to answer the question "Where do you find bold design?" Their suggestions also will appear on the billboard via a continuously updated Twitter feed. In addition, passers-by can check in to the billboard on foursquare or Facebook Places. The A7bolddesign.com site also invites users to nominate their own bold destinations in New York City – or any other U.S. city -- through their mobile devices or the social sites. The bold destinations are searchable on a map, by nearest destination, or by alphabetical listing.

Surrounded by Broadway’s landmark theaters and Times Square’s largest hotels and popular retail destinations, an estimated 1,264,000 pedestrians per day will pass by Audi’s interactive billboard. The timing of the billboard coincides with the New York International Auto Show, one of the boldly designed locations in New York City featured in the campaign. The interactive billboard concept for the Audi A7 was conceived and implemented by New York-based MediaCom USA. Its design, execution and digital extensions were done by ZAAZ and M80, Audi’s social media agencies.

The perfect fusion of style, luxury and technology, every detail of the A7 delivers a striking visual statement. From the groundbreaking MMI® touchpad and its gracefully integrated display screen, to the state-of-the-art Head Up Display, the A7 is the perfect marriage of progressive design and sophisticated engineering. More than a design icon, the A7 also sets a high standard for performance, handling and efficiency with an all-aluminum Audi 3.0 liter TFSI® V6 engine, 310hp and 325 lb-ft. of torque. Visit http://models.audiusa.com/a7 to learn more about the all new 2012 A7.