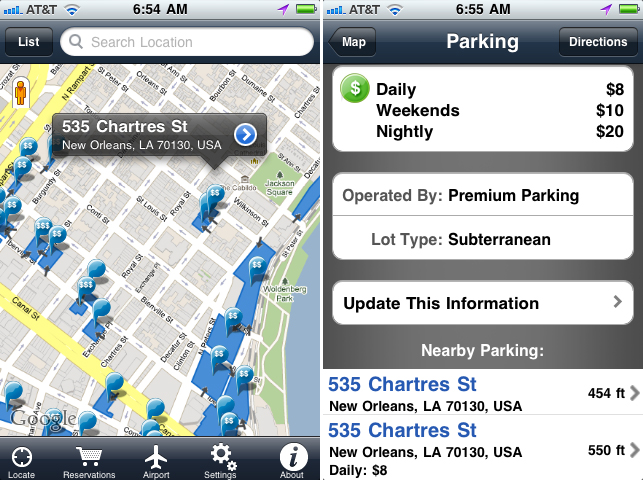 If we were app developers, the next-to-last frontier we'd want to conquer -- right after organ donation -- would be parking. By their very nature, cars are constantly in motion, taking and leaving spaces in parking lots, garages, and on city streets. Maintaining an accurate database of available parking spots seems like a gargantuan, never-ending challenge, and yet, we've seen several app makers try their hands at it. Now, another is giving it a go: Parking In Motion.

Last summer, we saw the daddy of 'em all -- Google -- take a stab at the parking problem with Open Spot, which allows users to flag open parking spots in exchange for karma points. (Presumably, users will eventually be able to trade in those points for something useful like, maybe, parking.) The problem? Open Spot depends on active participation: users have to whip out their phone when they're leaving a spot and tell the app that they're doing so. That's fine for charitably minded folks with good memories, but when people are in a hurry, they're far less likely to tap in.

Then in December, we covered an app called Parker, developed by Streetline and the Los Angeles Department of Transportation. Using sensors affixed to parking meters, Parker keeps track of open spots in and around Hollywood, California. When you open the app, Parker points to the nearest open spot using your smartphone's built-in GPS. The problem? Parker depends on a lot of sensor technology -- technology that is not only expensive, but could be hard to install on a large scale, since traditional street meters are often being replaced by pay-and-display systems.

Parking In Motion, however, veers off the streets and into a different arena: parking lots. The free app (currently available for iPhone only) maintains a map of garages and lots near you, offers handy info on rates, and even compares those rates with other facilities in the area. In some cities, you can even reserve a parking space via your phone. According to the company's website, future updates will include:

* Real-time parking availability (for both street parking and garages)
* Street parking rules, restrictions, and meter locations
* Pay your meter from your mobile phone!!!!
* Save money with our mobile parking coupons

If you live and/or work in a congested urban area, that probably sounds pretty good. There are, however, some things to consider:

1. In its current form, Parking In Motion doesn't do much for daily commuters, who either have monthly parking contracts or know where to find the best lots and garages. It could come in handy for travelers, though -- especially those planning road trip vacations to major cities.

2. Parking In Motion depends on participation from lot owners, parking meter companies, municipalities, and other entities. We're not saying that the company can't coordinate all that data, but in an information environment that complex, the Parking In Motion database is sure to have its share of flaws when it comes to rates, availability, and such. Be prepared.

3. In its current iteration, Parking In Motion leaves out street parking entirely (though that's set to change soon).

We love a free market economy, but we hate to see duplication of effort, and we LOVE playing matchmaker. If we were venture capitalist yentas, we'd set up an arranged marriage between Streetline (which has a strong street parking plan), Parking In Motion (which has already begun the work of negotiating for information from garages and the like), and Google (which has the cash to deploy the sort of sensors that Streetline needs and the staff to haggle with garage owners, parking meter companies, and municipalities to broker deals on fees). Then everybody wins.