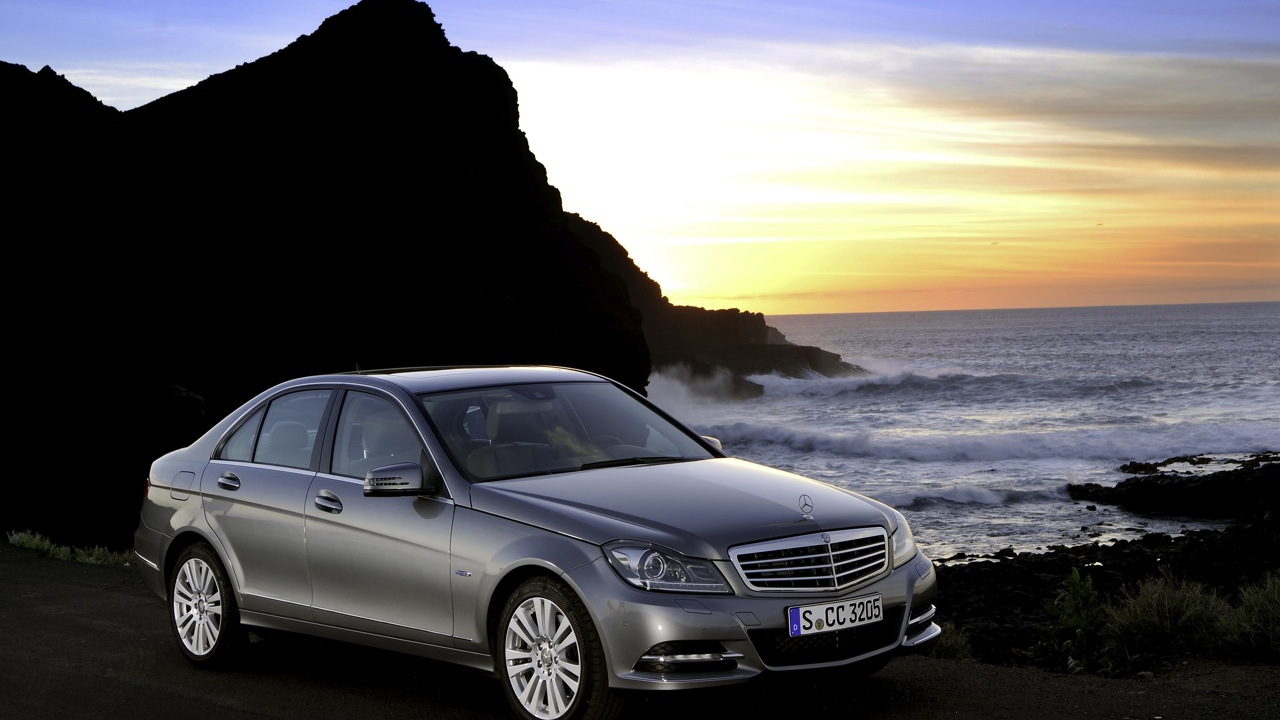 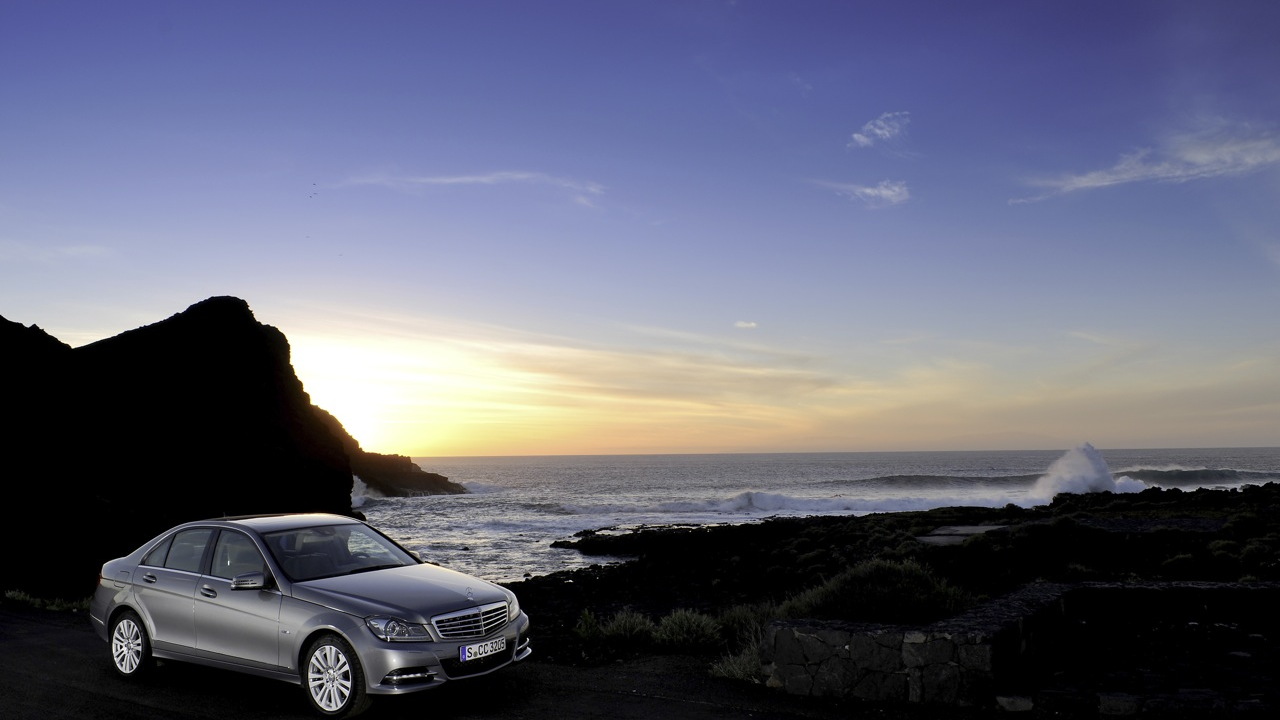 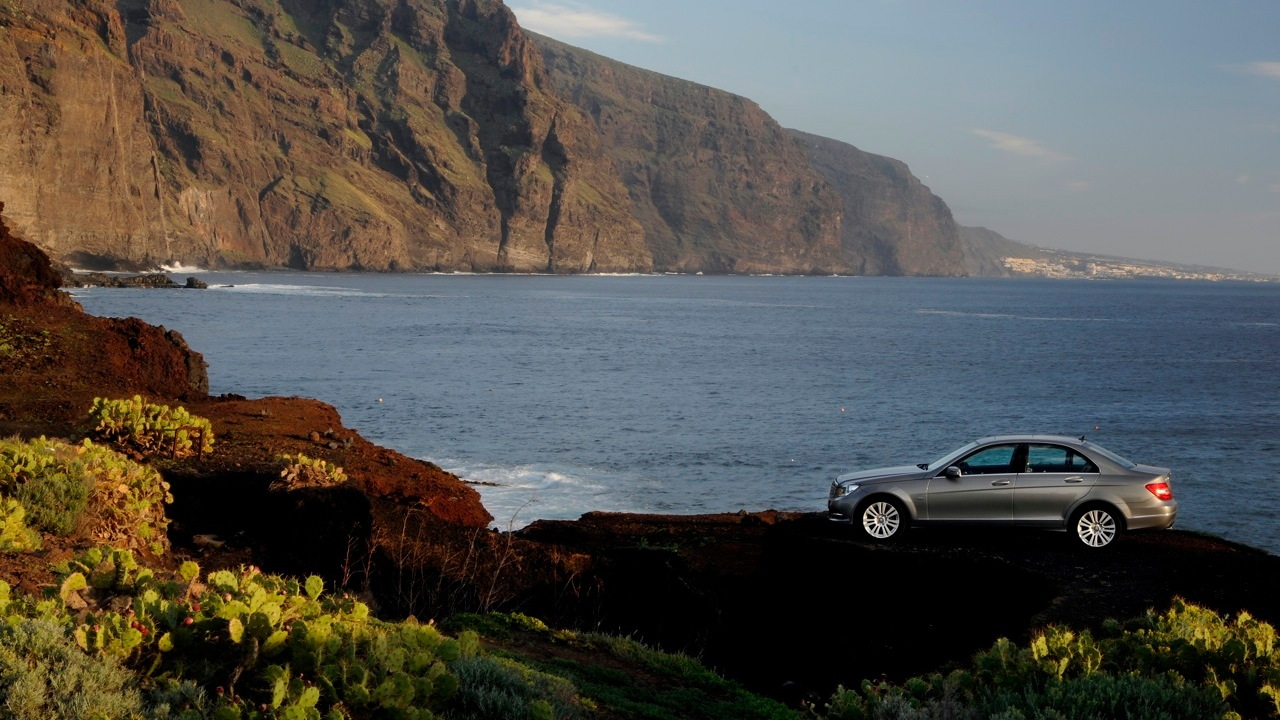 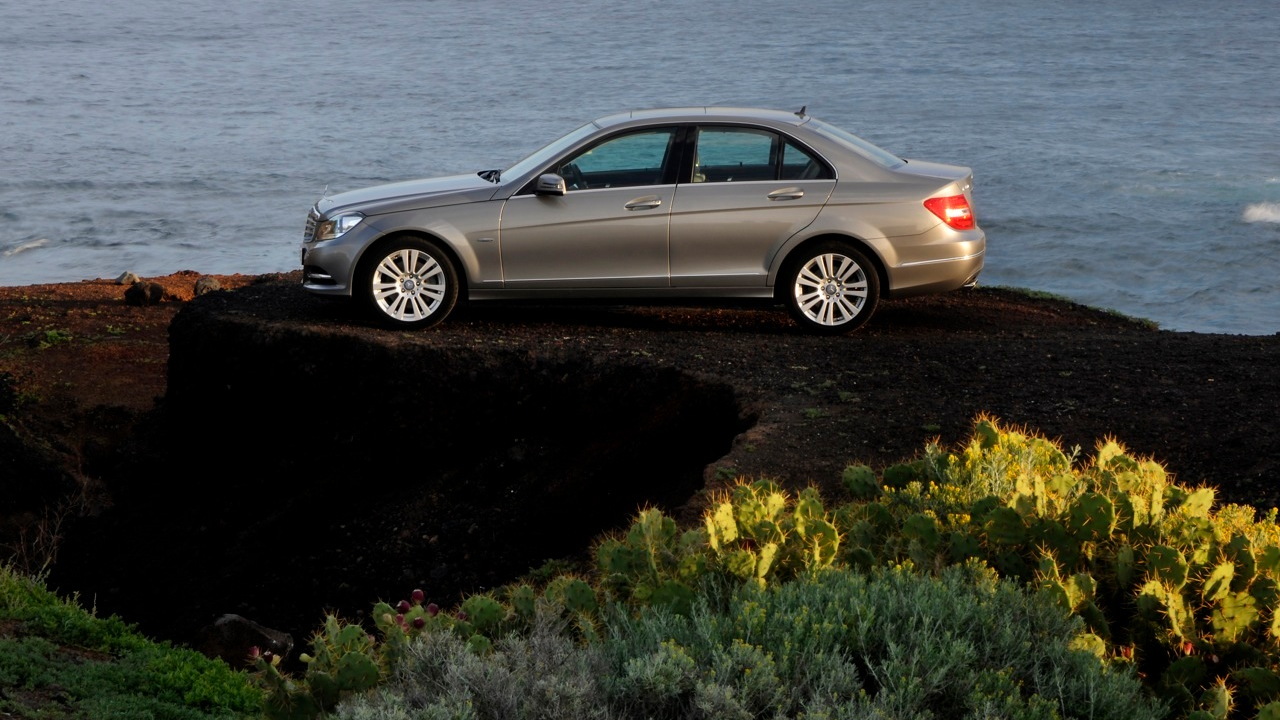 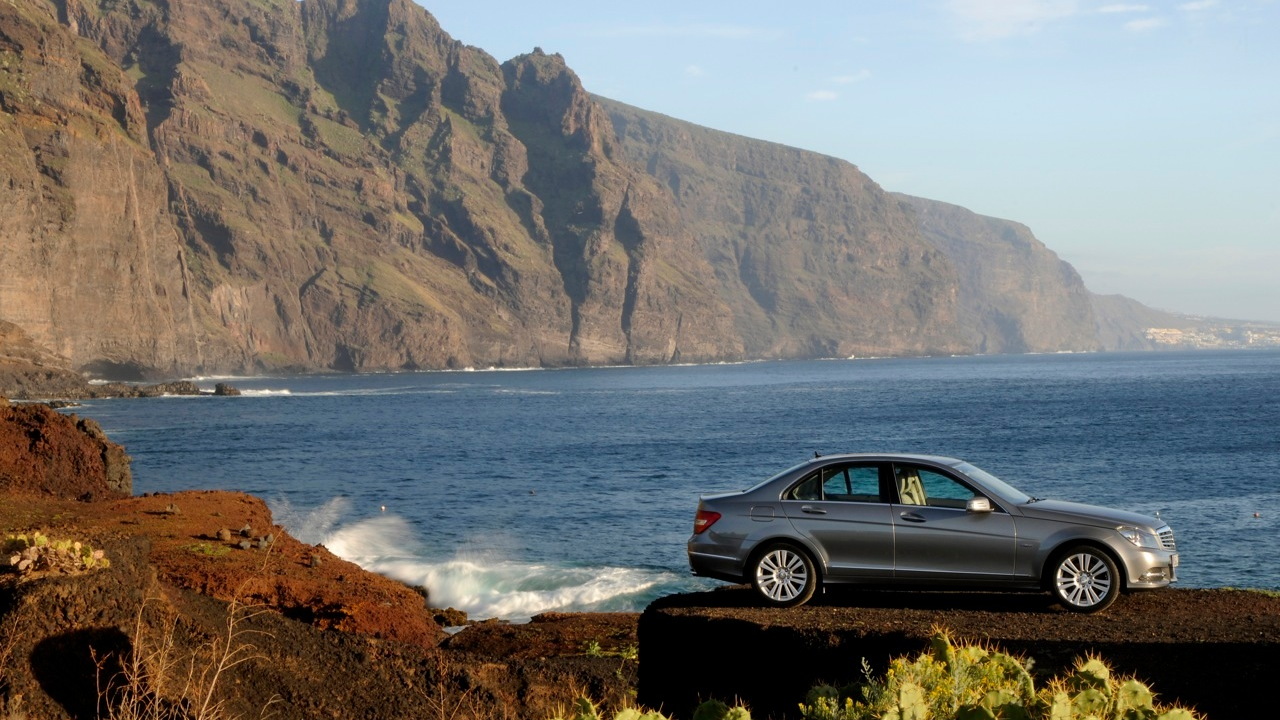 This week's 2011 Geneva motor show turned the Swiss town's Palexpo hall into a virtual exotic-car warehouse, stuffed with Aventadors and Ferrari FFs and the usual microbrew blend of Rinspeeds, Gumperts and Paganis.

At the Mercedes-Benz stand, rubbing elbows with its frenemies next door at BMW, things were only slightly more prosaic, with SLKs and SLS AMG E-cells, along with the latest iteration of the C-Class.

Practical, yes, but absolutely more vital in the grander scheme, since the C-Class is one of Mercedes' global sales pillars. This year's C-Class will eventually count C-Class Coupes and AMG editions in its wide, deep portfolio--not to mention wagons and diesel editions not in the master plan for the American market. But coming first, in August of this year, are the stock-and-trade sedans that make perfect sense out of the return of the four-cylinder engine to the C-Class lineup for the first time in nearly a decade.

After a generation of upsizing powerplants and downsizing fuel-economy numbers, even the German luxury brands are paying close attention to the fragile U.S. economy and the spiky threat of ballooning gas prices. The C-Class still spreads the wealth between bigger, more powerful V-6 and AMG V-8 versions--but it's the new turbo four that's the most intriguing, for timely, geopolitical reasons.

In a first drive that circled the Spanish island of Tenerife, in three different flavors of the revamped C-Class--including the base Euro diesel, the C220 CDI, and the torqueaholic C350 CDI--the new entry-level C250 declares a decisive win for logic. Like the optimized powertrains cropping up elsewhere in the auto world, the C250 just makes clear sense.

For the record, the higher-output versions of the revamped C-Class include a C300 4Matic sedan with the carryover 228-hp V-6, and a C350 with the uprated 3.5-liter V-6 found in the larger E-Class, with 302 horsepower and 273 pound-feet of torque, an upgrade of 34 horsepower and 15 pound-feet over the previous V-6.

Off the spec sheet, the C250's 1.8-liter, direct-injected, turbocharged four has some of the same technical makeup as the engines in Ford's EcoBoost range, the VW/Audi 2.0-liter, or GM's DI turbo four. The Mercedes flavor of high-tech turbocharging nearly matches the power of the carryover base V-6, coupling its blower with direct injection to wind out 201 horsepower and 229 pound-feet of torque. That's only 27 fewer horsepower than the V-6 while it's eight pound-feet of torque more in the win column.

The net result: it's not meaningfully less powerful than 2011's base C-Class. The former C300 came in at a 0-60 mph time about about 7.1 seconds, and that's what's quoted for the new one, too. Based on a brief drive through crowded Canary Islands causeways, it seems highly unlikely that any intender will notice how the new turbo four changes the C-Class' straight-line performance.

The driving feel probably won't even register with the raft of first-time Benz drivers who find a great lease deal their most compelling  way into the brand. There's just a strong, smooth wave of torque being fed to the rear wheels across a big part of the tach's sweep. The key differences with the V-6s boil down to the usual noises and vibrations--the deeper, slightly more earthy four-cylinder engine noise, without the thrash of an oversized four but also, minus the kind of induction whistle that gives everything from XKRs to Evos their jankier soundtrack.

We do wish the paddle-shift controls would make their way into U.S. models; the Euro diesels have them, and the fallback side-to-side motion for shifting the C250's seven-speed automatic in sport mode means lifting a hand from the wheel, something we'd rather not do on a lane-and-a-half path with guardrails apparently made from twist ties. (Paddles seem to be reserved for the mighty C63 AMG, which arrives later this year.)


No official EPA numbers are out, but fully expect that turbocharging and direct injection will improve on the figures generated by last year's 2011 C-Class. The estimates are a 15-percent boost in mileage; with the base 2011 model checking in at 18/26 mpg, a new highway number of 28 mpg could be within easy reach.

Other driving characteristics hardly have been changed. The C-Class scores well for its sharper dynamics--particularly the sport models. All models once again have an Agility Control suspension, which uses mechanical switches to change suspension tautness and reduce body motion, while still giving the C-Class a well-controlled ride. The steering can feel a bit zestless, and yet it's a magnitude better than the previous generation, and much nearer to the benchmark BMW feel.

The new drivetrains are bundled up in a tastefully retouched body. Some of the over-rendered creases in the front end have been pulled taut. The Sport treatment stands out not just for handling but for the emphatic, rap-star/salad-plate sized Mercedes emblem floating in its barred grille. It's a closer visual link to its newer siblings, everything from the SLS AMG to the SLK. The more formal look doesn't knit together as well, the laid-back grille duking out it with the scalloped chin. With the ample comfort of the Sport's ride and its cleaner face, there's not much excuse for leaning on tradition here.

Inside, the C-Class' 2012 update layers on handsome touches with geometric precision. The more sporty aluminum parallelograms win out over burled walnut, though the black-ash trim of luxury models tops them all for tasteful modernity. Sport versions lift the metallic-trimmed steering wheel from the new 2012 CLS-Class, and it's a bright move.

Not a thing has changed in the C-Class' packaging, and while front-seat passengers are quite comfortable, the back-seaters might lodge a complaint or two if they're outsized or leggy.

A panoply of new safety gear is woven into the C-Class' electronic architecture. Lane-departure warnings vibrate an alert when you've crossed the line, blind-spot monitors bleep and light red triangles to warn you for dangers in the periphery, and the anti-drowsy-driving Attention Assist alert reminds you when it's time for a Starbucks break from driving. Mercedes also sells European buyers on a system that detects speed-limit signs, and lets them surf the Web live, but those features won't make it into American-bound cars. Rear side airbags are an option for us, however, along with parking sensors.


When it goes on sale in September, the C250 brings with it a fairly complete feature set. On the big standard-features list are a standard sunroof; dual-zone climate control; power front seats; AM/FM/CD/HD Radio with Bluetooth streaming, a USB port and an LCD display; a multifunction steering wheel; a tilt/telescope wheel; and LED taillamps. Options include a Sport package with 40-series rear tires, five-spoke wheels and aluminum cabin trim; a Luxury package with wood trim and a slightly softer suspension; a Premium package with satellite radio, an iPod interface, a Harmon/Kardon surround-sound audio system, and heated front seats; and a Multimedia package with a rearview camera, COMAND and navigation, and a DVD changer with an SD card slot.

The C300 4MATIC has a similar set of features. On the C350, the iPod controller, Sirius, surround sound and heated front seats become standard, as do wood trim and the sport suspension.

Mercedes' new mbrace telematics system is available across the 2012 C-Class lineup. If you rock it old-school, they'll even install an in-dash CD changer for you. MB-Tex vinyl upholstery is standard, with leather an option; 18-inch wheels can be specified on some trims.

This 2012 revamp marks the C-Class' last stop at the body shop before an entirely new generation comes to the U.S. Beginning in 2014, Mercedes will move some C-Class production stateside, where it will join the M-Class, GL-Class and R-Class utes at the company's Alabama assembly facility. When that arrives, we'll likely see a a convertible joining the C-Class lineup, too.

For now, the big news is smaller displacement--and by all the usual yardsticks, the C250 makes a convincing case for its return.