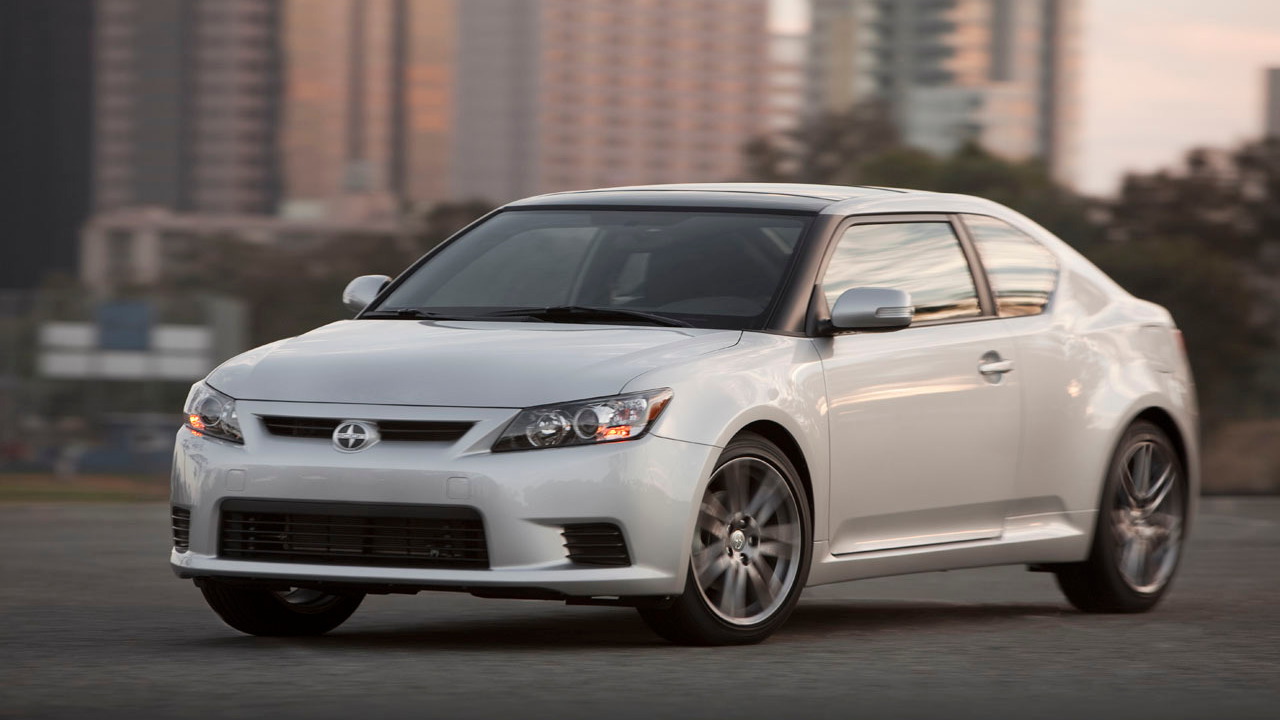 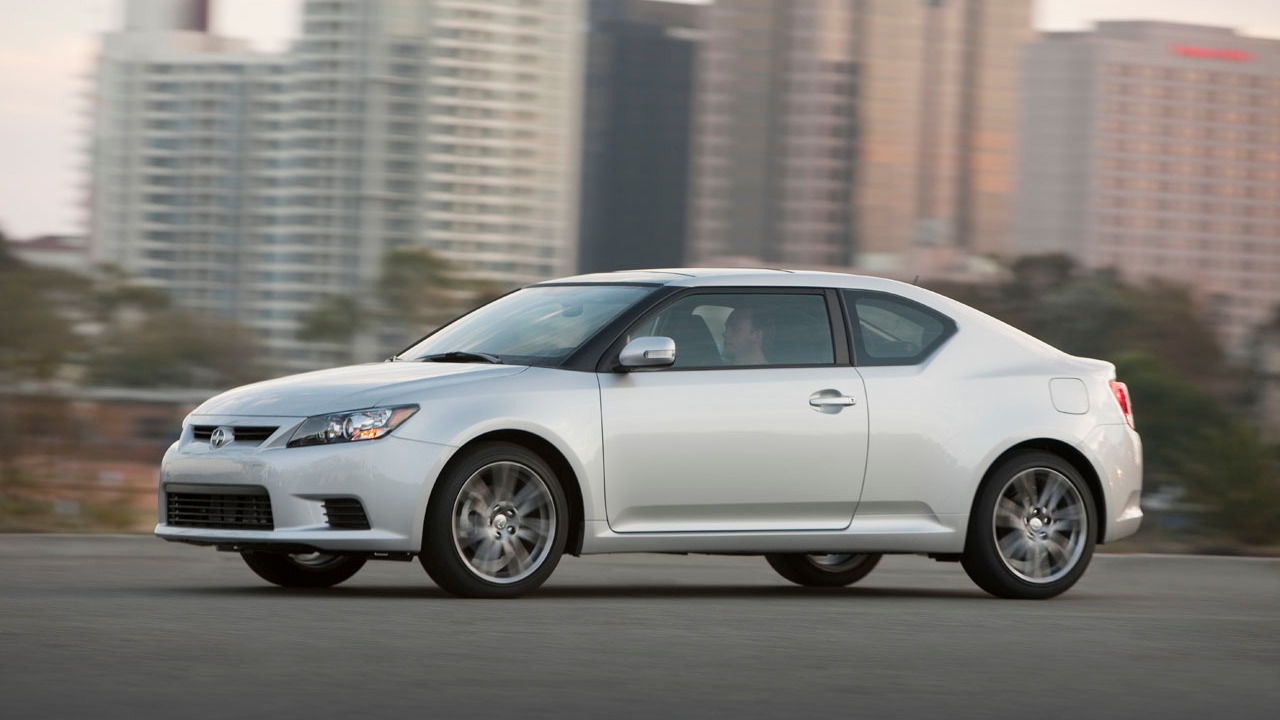 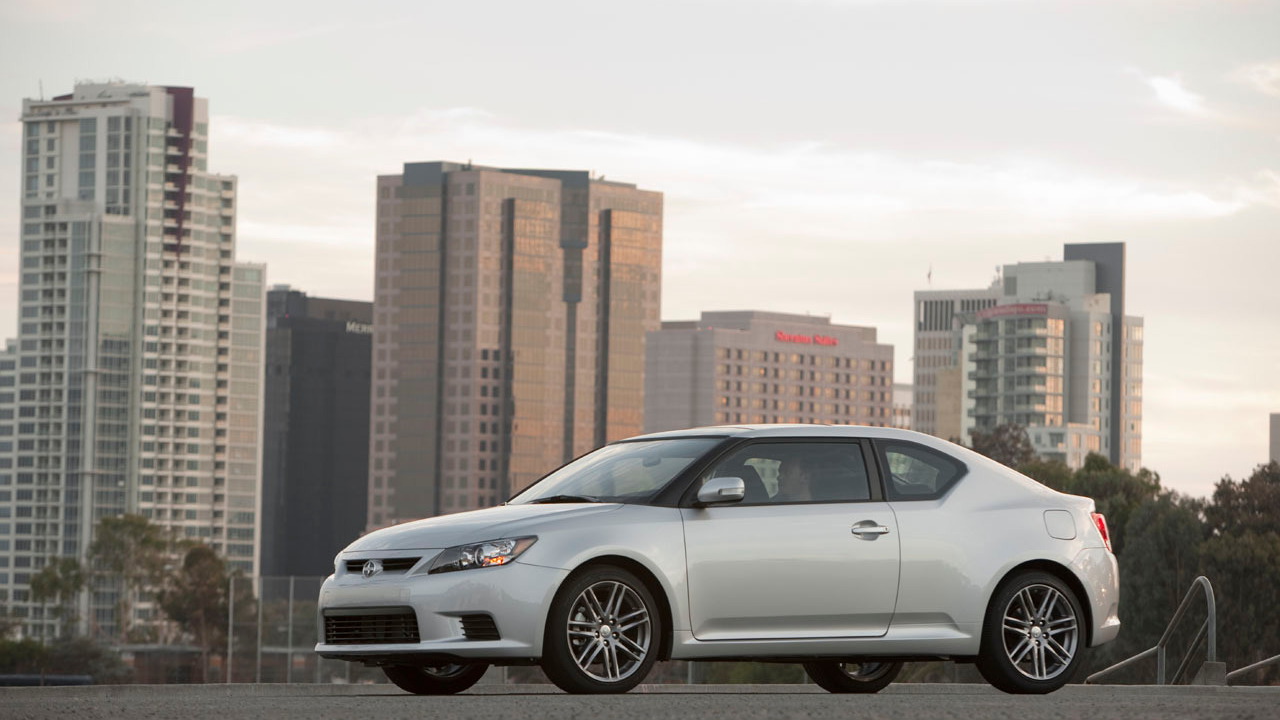 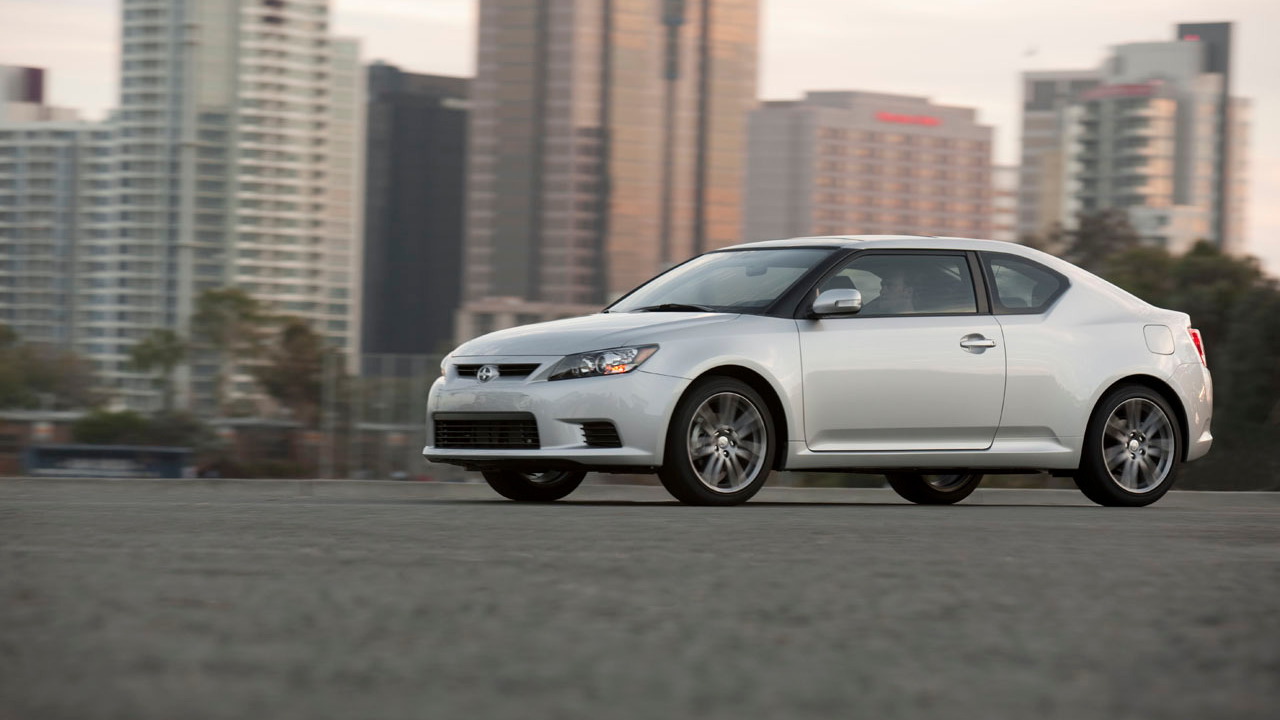 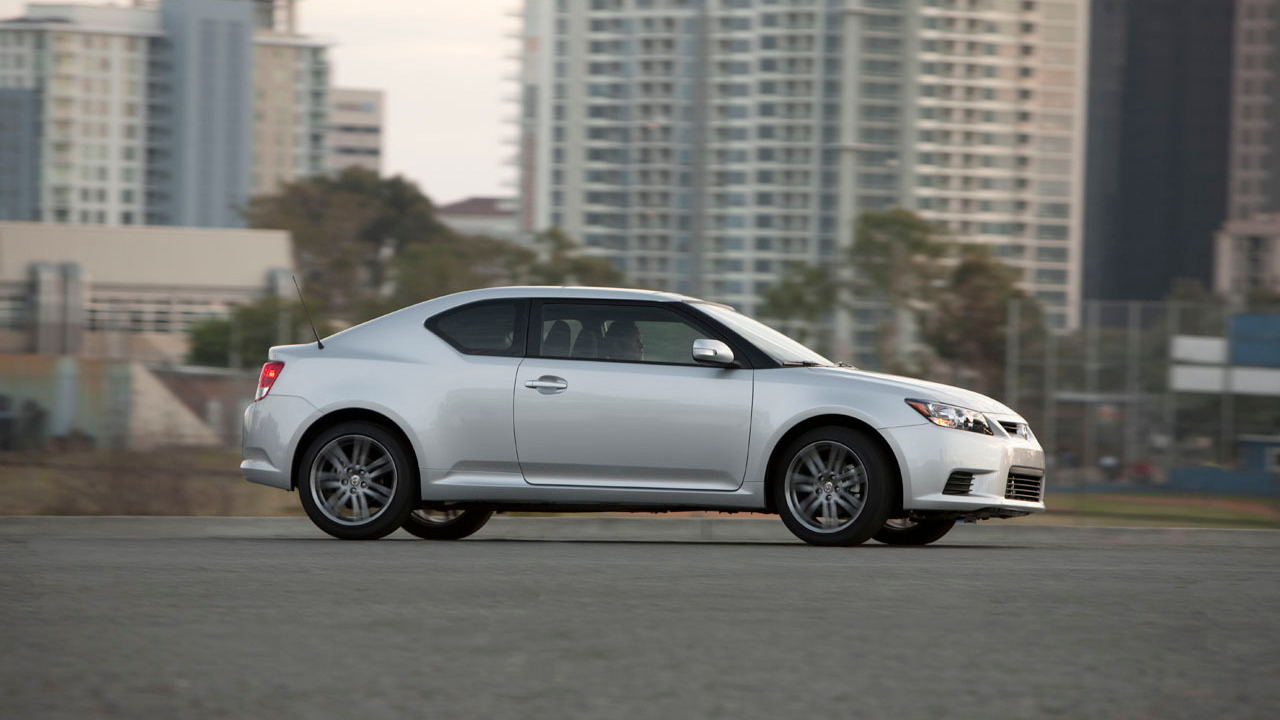 Exotic coupes are a dime a dozen -- actually, more like a million dimes each and up -- but inexpensive sporty hatch-coupes are a fading lot. From the ranks of the old Mitsubishi Eclipse, Toyota MR2, Acura Integra and even the Ford Probe and Mazda MX-6, we're down to a precious few two-doors you can buy for less than $20,000, and still have a good time at the wheel.

The 2011 Scion tC wants to be in any place we talk about sports coupes and hatchbacks, so much so that Scion flew us out to San Diego this week to take our first spin behind the tC's wheel. After a day of looping around the hills east of town and circling the airport like a 757 trying to thread the needle into the city's notoriously tricky airport, we came away more impressed than ever with the tC, or really, with any Scion, on a fun-to-drive basis. We'd still want to spend a fairly lavish amount on the aftermarket pieces, but the bare-stock car is now something you'd be happy to pit against the likes of the Kia Forte Koup, the lame-duck Ford Focus two-door, the Honda Civic Coupe and even the spark-free Honda CR-Z.

If you're female, you might think the tC's a mite less appealing, though. Follow the he-she stereotypes through the Scion's new shape, and tell us: is this a shape girls will like, too? Its collection of straight edges have crisped up the 2011 tC's design out of mock-Celica doldrums and into a new happy place of visual distinction. From the side, the big notch in the rear quarter glass is supposed to look like a helmet. We're seeing a mix of GT-R, Camaro and Cylon in the profile. Some fitting sci-fi references are at work, for sure, and they turn concrete when the tC wears its "cement" paint color, a battleship grey that mimics a Steelcase desk (or an ur-Audi TT). The angles slashed into the front and rear ends amplify what we think is something like...design character? We can only hope they're putting this much thought into that on-again, on-again rear-drive FT-86 coupe.

Carried through the cabin, that magically rediscovered T-square puts some starch in the Scion tC's instruments and controls and some glaring lapses in finishes. The fat steering wheel has a flat bottom, and begs your attention as soon as you slide into the wide, sculptured front seat. It's not enough to distract us away from the trifecta of differently grained plastics that hook up in an unnatural way right over the glovebox, but the cockpit wears red-lit gauges well, and the cut-tube gauges and Reese's-sized climate controls inject some function-over-form simplicity that we are loving, after having spent all afternoon deciphering the identical chromed radio buttons on a 2011 Toyota Avalon.

On to performance. The 2011 tC, fully pimped out, does an uncomfortable price overlap with a 2011 Ford Mustang V-6 that will smack it down with sub-6-second acceleration runs all day long. Tucked under the $20,000 limit, the tC outdoes any front-drive coupe from Japan at the price, with juiced-up power and grip that's just aching for some kind of forced-induction abduction.

There's but one drivetrain you'll get in any tC, a 2.5-liter four-cylinder with variable valve timing and a variable intake manifold. It's related to the bigger four in the base Camry, and reels off 180 horsepower with a smooth, churning resonance with a slight burble in its tuned exhaust that surfaces around 3200 rpm. It's by no means a zingy powerplant, but it gets the job done from a 600-rpm idle up to its 6400-rpm redline. With the larger engine (up 0.1 liters), the four puts out 18 more hp and 11 pound-feet over the '10 edition, and Scion says that's enough to boost the tC to 60 mph in about 7.6 seconds with the manual gearbox, or 8.3 seconds with the automatic.

Scion pairs up the four with a six-speed manual transmission with a nicely weighted shift lever and a crazy-light clutch uptake, or a sequential-shift automatic with its manual mode hanging off the left slot from Drive. Guys will choose the stick, but there's relatively little shame delivered with the automatic. It'll remember your driving style, so downshifts will come at a decent clip if you hammer on the throttle or slide the shift lever left, and down. Scion's skipping any kind of paddles for now, which we hate, but at this price point it's not much of a surprise.  Either version nets you 23/31 mpg, up a couple miles per gallon on both counts over last year.

On the roads in and out of San Diego, the tC's ride quality came up at the top of its charming list. And in this case that's not fatal for a sport coupe. Even with 18-inch stock wheels (and 19-inchers an option), the tC rides calmly over the kind of perennial construction you see all over downtown San Diego and the mild pavement waves that ripples over I-8 eastbound. Toyota had tC hatches with TRD racing pieces installed, and the thick stabilizer bars turn the car into more of a sledgehammer on these kinds of streets, but an unmodified tC and its independent suspension is a fairly nerve-soothing choice among sporty cars. Electric power steering actually feels good here, too, as do the bigger all-disc brakes.

Exactly as long overall as before, this year's tC has gotten wider on paper. The span across the interior's not much bigger, but the front seats have. The big bolstered buckets have good grippy cloth all over, and they're wide--so wide, even football builds will feel fine after a few hours behind the tilting, telescoping wheel. We have no kudos here for the standard sunroof, since it robbed me of the 3/4-inch of headroom I needed to avoid contact with the fuzzy roof liner.

In back, we'd give all those missing props. Not only will adult-sized adults get in there easily enough, they'll find a backrest that reclines a few degrees, almost guaranteeing most passengers will find a comfortable seating position. The front seats also have a memory function so when they're flipped forward, they'll reposit themselves as they were before you opened up the doors to the party crowd.

Since Scion puts the USB jack in front of the shift lever, I found more use for the shallow bin ahead of it. The console's a bit too skinny, and in a skin-flint touch, it's all hard plastic, like most of the dash. The glovebox is pretty shallow as well--but the cargo area under the hatch can hold a few roll-aboards and has a pair of deep bins for rattly things like tire gauges.

At a base price of just a hair under $19,000, the 2011 Scion tC hits almost all the notes you'd want to hear in this gadget-addled category. Standard gear includes power windows, locks and mirrors; cruise control; steering-wheel audio controls; XM satellite radio; tilt/telescope steering; and that sunroof, which lights up the cabin but comes with a flimsy pull-forward shade that slips out of its track more often than you'll have the patience to correct. The glass roof also has a pop-up mesh wind deflector that doesn't really change the volume of noise generated by the raised panel, just the frequency.

For safety's sake, the tC comes with eight airbags, the two unusual ones being front-passenger knee airbags. Stability control and anti-lock brakes are standard, too, and the tC has a switch to turn off the stability control.

Scion's put a ton of effort into audio, as you can see from the list above. The base head unit has 300 watts of power and eight speakers molded into the door panels and dash, and while it's more loud than crisp and clear, it's what the people want (the people being someone around 26 years old, Scion says). The midrange option is an Alpine unit with a small screen for an available plug-and-play navigation system I thought was too small for easy use and clarity. Spend all you can on Scion's accessory sound and you'll get a touchscreen navigation/audio system with some wonky gen-II iPod controls programmed in--though it does include Bluetooth streaming and phone controls as well as HD Radio. There's no SYNC to be found--and if you don't splurge on the top-dollar head unit, a separate Bluetooth accessory will cost you.

Will that be the thing that drives people from Scion over to Kia or Hyundai, where they hand out Bluetooth like Tic-Tacs? We doubt it, and we're far more ready to "like" the tC's driving feel compared to the clunky manual and slightly squishy feel of the Forte Koup. It's not a tremendous value any more, but the tC finally has some character to call its own.