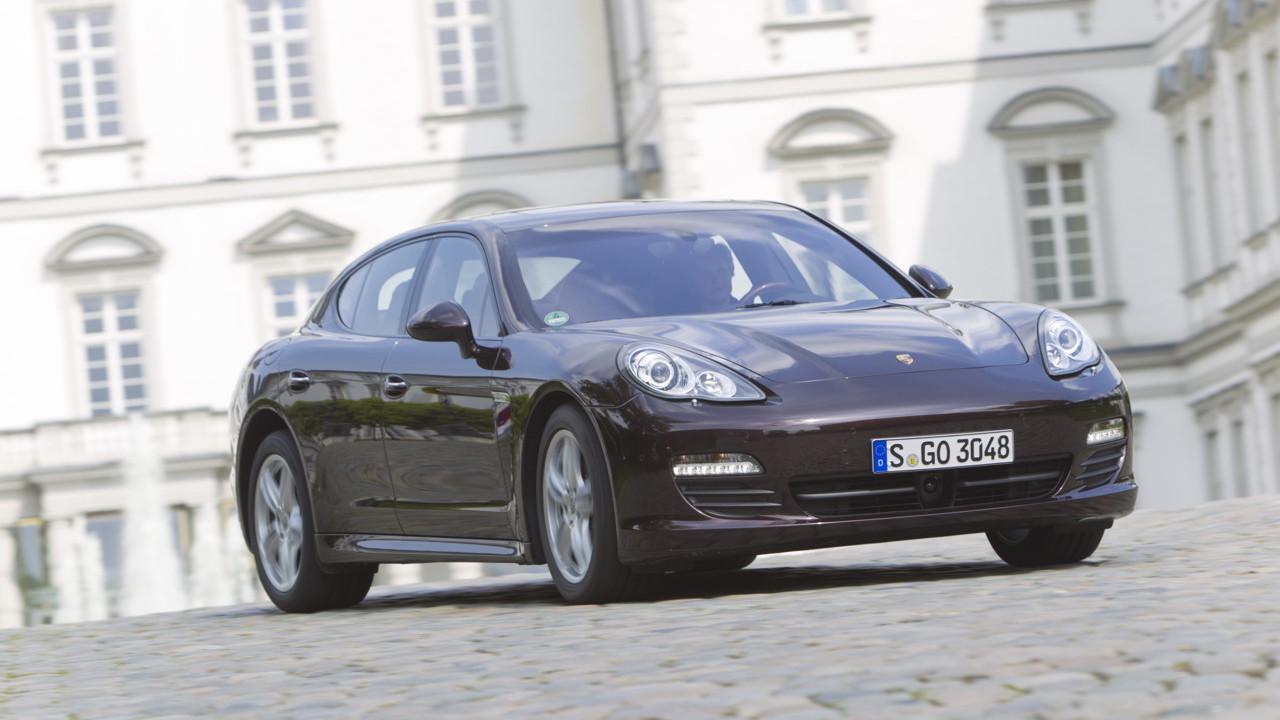 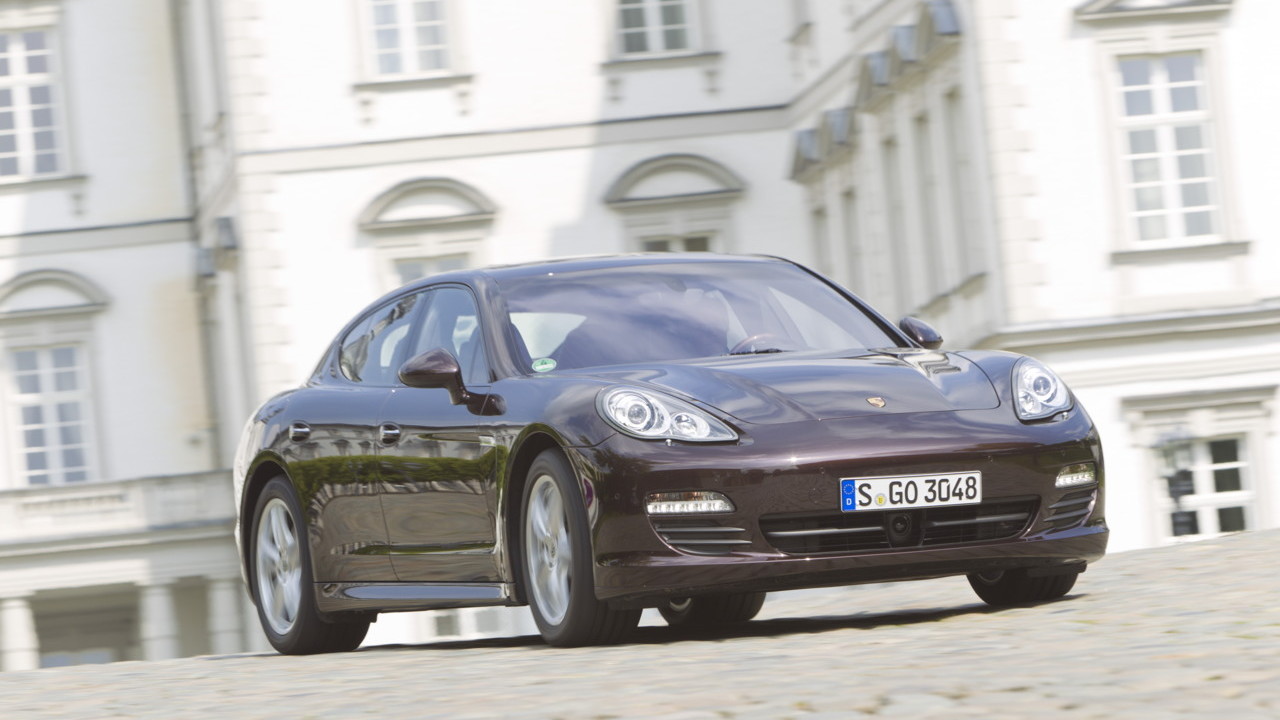 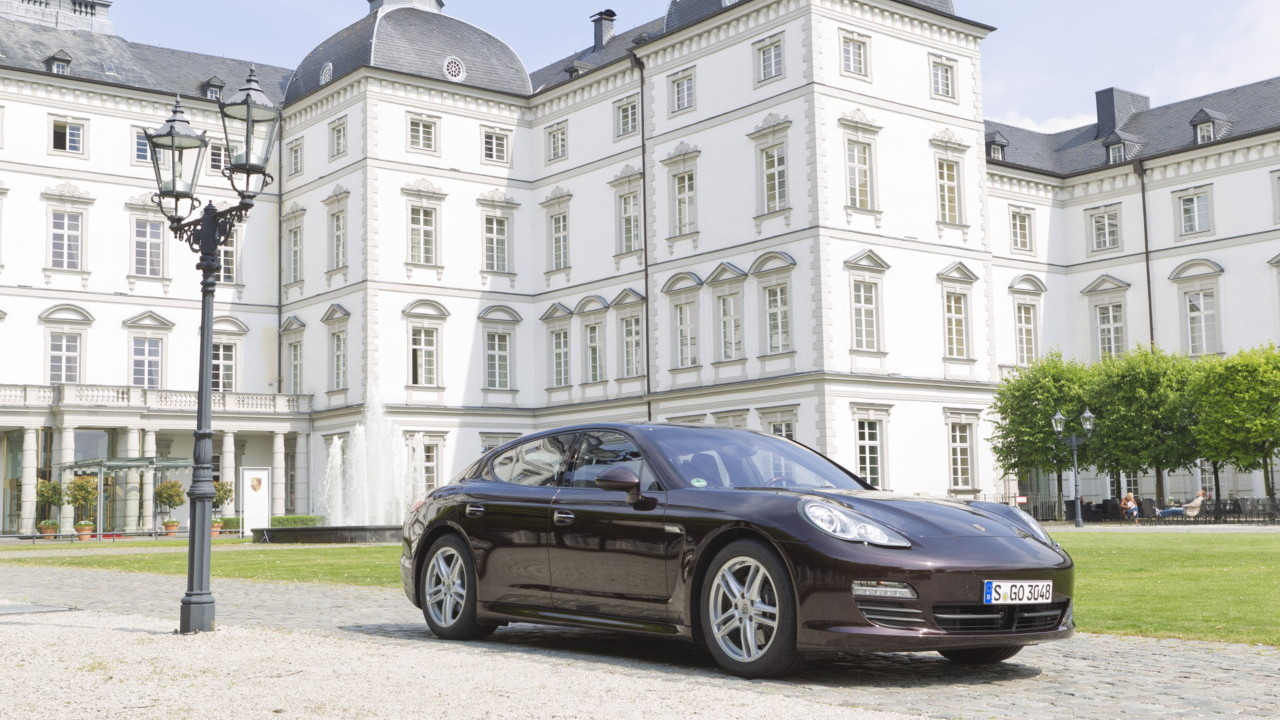 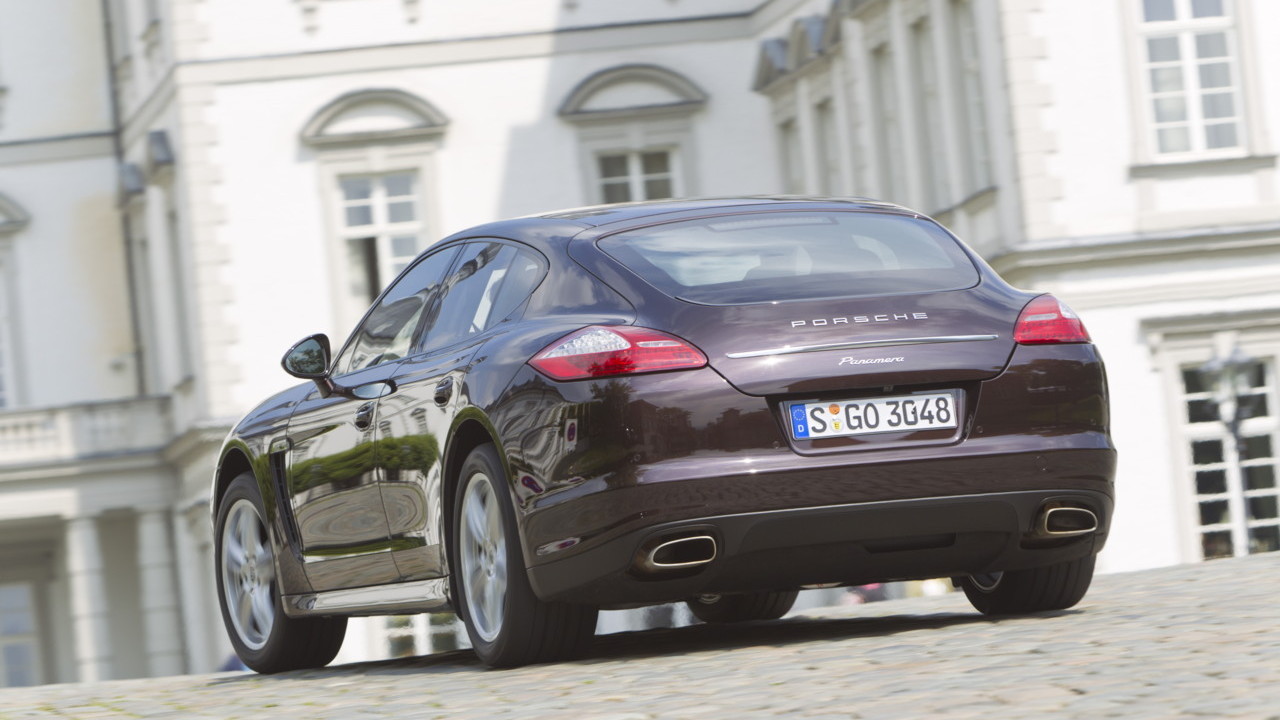 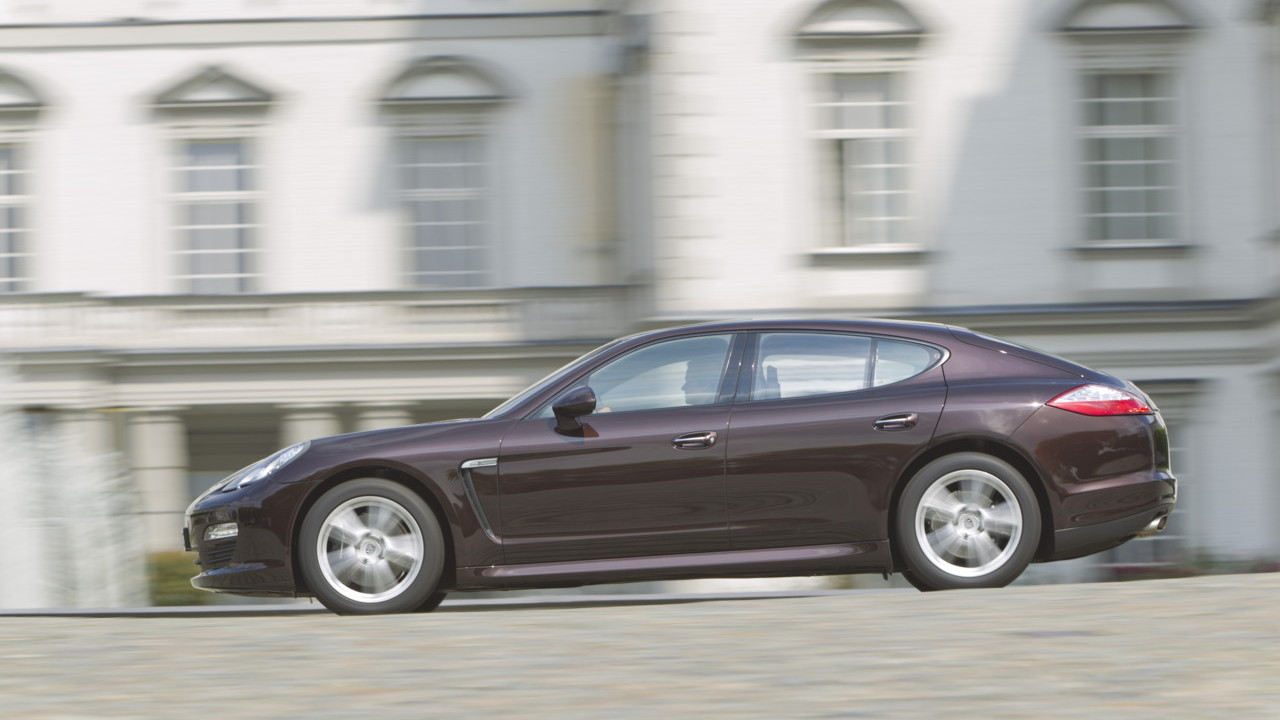 43
photos
Fortunately, there’s a lot more to the 2011 Porsche Panamera than a quirky roofline and fastback body.

Lusting after quirky cars based on looks alone is seldom a good idea. Years ago, I really wanted a late 1960s Jensen Interceptor. It’s a car that, despite the obvious differences in pedigree and number of doors, is with which I couldn’t help but compare the Panamera. As our editorial director Marty Padgett remarked as one of his (appropriately terse) dislikes of the 2010 Panamera, “Baby got back.” It’s true; the Panamera, just as that old Jensen Interceptor, has the front end of a sports car, paired with a roofline (and tail) that looks like it might have been pulled a bit far upward and aft to add practicality.

The Panamera is truly, beautiful or not, in the eye of the beholder; while my colleague saw the design as a little imbalanced, I see that quirkiness as beauty.

With the original Interceptor (another car seen as hideous by some scribes), the reality check came the first time I drove one: with its low-revving big-block Mopar V-8, mushy three-speed automatic, loose steering, crashing suspension, and bloated, overweight feeling, it was an utter disappointment and not the car it promised itself to be, at least from some angles, from the outside. Love affair over.

Here’s the simple difference and the point that you should keep in mind: the Panamera, even in V6 form, isn’t a novelty that will wear off. The more you drive it, the more you’ll like it. And it doesn’t drive like an ordinary car, not even an Audi or VW; it drives like a Porsche.

Yes, the Panamera starts, stops, and changes direction with a certain verve that's unexpected in a larger four-door car. In an age when nearly every sedan turns out to be a lot more portly than you might think, the Panamera is remarkably lean, at 3,880 pounds (just over 4,000 pounds in Panamera 4 guise). That's a little lighter than the new 2011 BMW 5-Series and 2010 Mercedes-Benz CLS, and much lighter than the 7-Series and Quattroporte, as well as the Jaguar XF. Steering is precise and quick, yet it feels just settled enough at high speeds. There's more tire and road noise than you'll encounter in other large sedans, but it's otherwise quite ideally set up for long-distance cruising.

The new V-6 engine that's used in the Panamera isn't the same VW-supplied VR6-derived) engine that's used in the Cayenne. Instead, this aluminum-alloy engine is assembled on Porsche's own line and is essentially the V-8 from the Panamera S with two cylinders cut off, with breathing, cooling, and oil systems redesigned accordingly. Porsche also included a balance-shaft system to quell the vibration that otherwise crops up in 90-degree V-6 designs, and it's very effective.

Although this engine lacks the high-rev 'magic'—the tonal quality—of Porsche's flat-sixes and doesn't exactly overwhelm with low-rev torque, it's a satisfying engine in its own right in the Panamera. Keep the revs above 4,000 rpm and you'll be able to extract a surprising amount of performance out of it, and it seems to hit a heavy-breathing frenzy in the last 1,500 rpm or so up to its 6,700-rpm redline.

While a six-speed manual transmission is standard in other markets (we nevertheless tested it and loved its slightly more connected feeling, though throws were a bit long), all U.S. Panameras come with the sweet seven-speed, ZF-supplied Porsche Doppelkupplungsgetriebe (that's PDK to the rest of us) double-clutch gearbox. Steering-wheel paddles—or button-levers, more precisely—manually command shifts with a seemingly instantaneous response, including a blip of the revs to match. And cars with Sport Chrono Plus come with Launch Control, which allows you to reap the full potential of the PDK transmission; from a standing start, it won't bog down, instead allowing a bit of wheelspin in back.

Three hundred horsepower sure isn't bad in the Panamera. Altogether, the Panamera V6 can get to 60 mph in as little as 5.6 seconds (the Panamera 4 is actually slightly quicker to launch) and hit a top speed of 160 mph. On a nice open stretch of German autobahn we easily saw about 140 mph before the powertrain started feeling a little out of breath.

Both of the Panamera models we drove were equipped with the optional Porsche Active Suspension Management (PASM) system, which smartly and quickly firms up the dampers only when needed; it can be set to Comfort, Sport, or Sport Plus modes. Base Panamera V6 models come with a steel-spring suspension, but Porsche didn't provide any cars for comparison. Meanwhile, the PTV (Porsche Torque Vectoring) Plus system works with the chassis and stability control and helps make the Panamera steer with greater security near the limit by gently modulating individual brakes in a way that will keep the vehicle more stable. The system works as a controlled rear differential on slippery surfaces.

Quite the chassis, quite the electronics

Obviously, since most of the Panamera V6's chassis underpinnings are carried over unchanged from V-8 S models, it's a sport sedan with a chassis that can easily handle what's on tap from the engine. The V-6-powered models actually have a slightly better weight distribution, because of the V-6's slightly lighter weight and farther-rearward center of mass.

Yet, in vehicles fully loaded with these electronic systems, the almost complete lack of body roll is somewhat eerie in a large sedan. Take the Panamera—at least the fully tricked-out ones that we experienced—through some tight, lower-speed esses and it feels a bit reeled in by electronics, providing a far less direct driving experience than basic forms of the Boxster and Cayman, for instance. That said, the Panamera still feels more in check than a Quattroporte and far sharper than a Mercedes CLS.

Though we didn't keep tabs on our test car's thirst, fuel economy should be quite good—an EPA-rated 18 mpg city, 27 highway for the Panamera V6 and 18/26 for the Panamera 4. That doesn't account for the Auto Start Stop feature; at stoplights, it helps save fuel by stopping the engine in some conditions when the driver's foot is on the brake. All models do come with a Sport mode that will disable Auto Start Stop and sharpen throttle and transmission reactions.

Back to that quirky exterior, after being inside the Panamera for just a little while, it all makes more sense. That bulbous tail does indeed pay dividends as soon as you climb into the backseat or try to use the cargo hold. You’ll find way more backseat space in the Panamera than in the Quattroporte, the CLS, or nearly any other sporty four-door cars. The Panamera has lots of legroom for two tall passengers to feel really comfortable and sprawl their legs out with an average driver ahead. The back seat isn’t at all claustrophobic, and there’s an airiness that’s a bit unexpected—thanks to the Panamera’s bulged-out roofline (and headliner). This six-foot-six driver was able to be a passenger back there, with just enough headroom. And the seats fold forward; it's a hatchback, after all.

To pack an old-style Porsche interior—drab plastic and all—into the Panamera would have been product suicide. But instead, as we've reported before, Porsche overdelivered here with a beautiful, sumptuous interior that simultaneously has both an aggressive coupe-like feel and maintains an airy cabin. If you’re the passenger in front, looking back, the Panamera can also feel like two cars in one. From the front seats forward it doesn't take much imagination to think that you're in an exceptionally plush Porsche 911. Though the engine sound obviously isn't quite the same, the view out ahead is remarkably similar.

There’s no raked-back leisurely lux-sedan feel to the seats or driving position up front; as in Porsche’s sports cars it’s very easy to find comfortable, rather upright seating position with a commanding view ahead over a low hoodline. Some might find it cluttered, while others will think of it as sensible and less distracting. Though disorienting at first, even after a few hours it felt familiar and we found having dedicated buttons for nearly everything to be refreshing and, we believe, less cognitively involving than memorizing menu structures.

There's very little difference in appearance between the V-6 and V-8 models—only the standard smaller 18-inch wheels, different single-oval exhaust tips, and matte-black (instead of chrome) side-window trim—and Porsche plans to sell a lot of Panameras with the V-6 engine here in the U.S. and Canada. In China, which is one of this four-door Porsche’s top markets, it’s predicted to be the best-seller of the lineup.

The base sound system was one of the few disappointments we could find with the Panamera; while 100 watts should be enough, it seemed to lack proper bass support when we turned it up. We strongly recommend the available Burmester premium surround-sound system, as well as the nice, snug Adaptive Sport Seats, which have plenty of side support without feeling constraining. The available three-spoke sports steering wheel also adds a bit more coupe feel if you're the kind to pretend you're in a 911. Otherwise, as we’ve said in previous reviews of the Panamera, the switchgear—particularly the levers around the steering wheel—feels a little cut-rate, as does some of the door trim. Dual-zone climate control is standard, but if you'll be carrying finicky passengers a four-zone system is available. Other options highlights include front and rear park assist, heated and ventilated seats, adaptive cruise control and, of course, a seemingly endless list of accessories, trims, and appearance packages.

The secret that you probably shouldn't spread too much word of is that prices are way more affordable than for the V-8; the 2011 Porsche Panamera starts at $74,400, while the Panamera 4 starts at $78,900, not counting destination or the inevitable collection of options. There's a pretty big step up in price to the Panamera V-8 models, starting at around $91k, and the Turbo, at an entry point of $134k.

Ultimately, there's no doubt that those who value performance are going to choose the Panamera S or Panamera Turbo. But to understand the Panamera V6 crowd, take another walk around and ask yourself what else there is with four doors and back-seat space, in this price range, that simultaneously looks so fast and exclusive. There's not much ordinary or traditional about this phenomenal fastback, and that's a good thing.