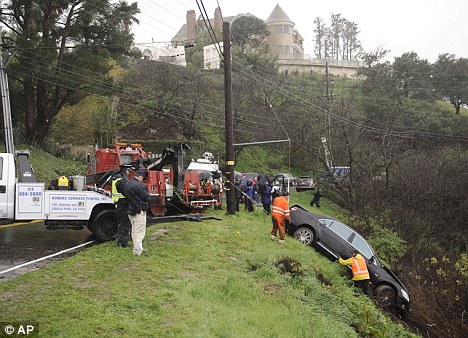 And so it came to pass, in the year of Our Lady Gaga 03 (commonly known as 2010), a plague settled upon the House of Sheen. The Patriarch (commonly known as Charlie) was beset by lawsuits and community theatre, and at some point, his automobiles launched a revolt.

In layman's terms: a Mercedes S-Class has broken free of Charlie Sheen's garage in the middle of the night. And before you go jumping to conclusions, NO, it is not at all suspicious that the exact same thing happened to another S-Class sedan five months ago. Or that both times, Sheen left the keys in the ignition. Or that both cars ended up at the bottom of a ravine in the 13300 block of Mullholland Drive. If Robocop taught us nothing -- and it taught us plenty -- it's that machines can totally fight back.

And if you think about it, it makes perfect sense: faced with honorable self-destruction or the indignity of spooning Charlie Sheen's ass, which would you choose?